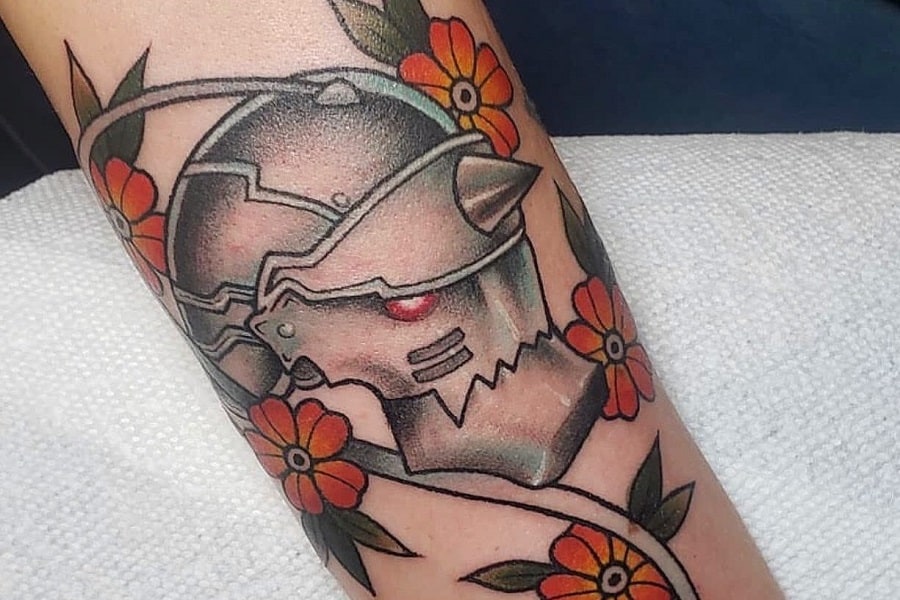 The Japanese manga series Fullmetal Alchemist and Fullmetal Alchemist: Brotherhood are two of the most popular fantasy titles to connect across the Pacific. This connection extends to an amazing array of tattoo designs and ideas.

For the uninitiated, the Fullmetal Alchemist story follows Edward and Alphonse Elric, brothers with the supernatural ability to transform matter, known as alchemy. After losing their mother to illness – and almost obliterating themselves in the attempt so save her – Edward loses his left leg and right arm, and Alphonse’s entire body is destroyed.

Alphonse binds himself to a massive alchemical suit of armor, while Edward gets almost magic prosthetics. Together they move through the world seeking to find the Philosopher’s Stone and heal themselves, while fighting some memorable bad guys and meeting other mystical alchemists along the way.

Read on for the top 63 best Fullmetal Alchemist Tattoos to help you plan for you next tattoo:

These black and gray tattoos depicting characters, scenes, and ideas from Fullmetal Alchemist apply just about every technical application to bring them to life. Whether it’s putting grayscale detail into Alphonse’s suit of armor, fuzzy scudding shadow amidst the sharp lines of Eric’s prosthetic arm, or much thicker black ink, these Anime style tattoos work beautifully.

These color anime tattoos opt for brighter, less finely detailed depictions. There is much less nuance, as the colors work together to form shadow and create the variety within each design. I like how much of the more detailed parts of these tattoos lie in the complementary images or within framing shapes to work in opposition.

Alphonse is such a unique character, there’s no wonder he’s a favorite character drawn across a range of tattoo styles. However, Eric looks like a character straight out of anime tattoo central casting, also providing a good opportunity to ink into cool color designs.

A Blood Rune is a sacred symbol used to bind someone’s soul to an inanimate metal object, such as Alphonse. The iron in the blood will interact with the metal it is on, causing the object and the blood rune to form a symbiosis.

According to the Full Metal Alchemist wiki: “The Ouroboros is a mystical symbol representing a dragon devouring its own tail, representing the eternal cycle of life and death or wholeness and infinity… Encircled within is a hexagram, which is a symbol often associated with alchemy as well as human creation. One could perceive the Ouroboros as a sort of basis for the Transmutation Circle used in the series.”

While these symbols are too heavy for a casual observer, it’s easy to see why these symbols make popular, visually arresting tattoos.

The Flamel sacred symbol that Edward wears on his coat and Alphonse on has on his shoulder came from their teacher Izumi Curtis. The serpent’s cross is an old alchemical symbol which represents the removal of a volatile or poisonous element.

From a tattoo perspective they are less lore heavy than the blood rune, hexagram or ouroboros above and make a great symbol that anyone familiar with the manga can recognize and appreciate.

And, if you’re not sure about getting a real one, you can always try getting a Flamel temporary tattoo before going all the way with your ink!

Some of these linework tattoos have been deployed more differently than the usual, heavier use of black outline. They go for a skinny, spare type of almost freehand linework that looks more like they’ve been etched with a ballpoint pen or biro, and I’m sure a few will have color or shade added to fill them out and finish them off.

Other more traditional linework tattoos show off sharply etched ink devoted to the transmutation circle, which is the magic circle needed to be able to use alchemy successfully. The clarity of these sharp lines looks excellent when delivered with such precise lines.

The one that most draws the is the red and black, thicker, more saturated black lined trash polka style piece. The brothers and Flamel symbol in flat black against the red blood runes and accompanying abstract patterns make an exceptionally fitting concept for a trash polka design.

These manga page style tattoos do an excellent job working in traditional application. They’re crisp images, shaped like the popular books every Japanese kid rides the train with. I like how these tattoos show flashbacks to the Elric brothers with their mother, or the ones that show other characters in situations that could have come straight from the page.

The use of different panels to juxtapose detailed shading in black and gray, against other sheets purely etched with linework make interesting contrasts in design for tattoo art enthusiasts to fawn over.

Colonel Roy Mustang is Eric’s superior, and at first glance seems like an arrogant fool of a person. Mustang, however, is a brilliant commander, spymaster, and useful in a fight. Rarely out of uniform, Mustang has a flame scar on the back of his left hand he earned one episode in a fight with the homunculus (artificial human) Lust. There are eight homunculii who serve as the bad guys: Father, Envy, Lust, Greed, Wrath, Gluttony, Sloth, and Pride.

These portrait style anime pieces show off Mustang in uniform, ready to throw down some alchemy, and are bolstered by sharp use of the blue uniform color and shaping devices such as the diamond shape, or crackling energy.

Okay, so Scar’s a vigilante serial killer looking to take out State Alchemists because they just about destroyed his people. And he has a massive X shaped scar on his forehead. His tattoos are a kind of alchemy array, and he uses them as his weapon of choice. Awesome! There’s a reason he makes any favorite character list.

Replicating his tattoos – heavy black ink and almost tribal design within their alchemy – is a good way of paying tribute to the show but doing so in a niche fashion as a nod and a wink to other serious fans.

9. The Elric Brothers – Eric and Alphonse

Alphonse and Eric make killer tattoo designs for the same reason they make great protagonists in the manga. They’re talented and charismatic but flawed individuals, who just happen to be badass alchemists. Oh yeah, and Alphonse looks like a cross between a medieval knight, the Tin Man, and a cyborg from the future.

Truth oversees the performance of alchemy, ensuring that the laws and rules are followed in the process. Truth is the universe’s supreme being and is sometimes referred to as the Universe or World itself.

The Truth is a brilliant symbolic choice for full metal alchemist tattoos, as he offers the ability to work amazing color, blackness, or even the planets around the central negative space image. The last, abstract representation of the Truth is an amazing piece of body art.

Being such a fully loaded dose of crazy, the world of the fullmetal alchemist gives individuals the chance to apply all different sorts of ink ideas corresponding to characters and situations throughout the manga. They create different variations, such as black and grayscale, or almost neo traditional work featuring thick black outline and vibrant color.

My favorite of these is the simplest: scratched in black ink referencing the date the brothers set their home ablaze and vowed never to come back

What is an Ouroboros tattoo?

The Ouroboros in Fullmetal Alchemist is a mystical symbol representing a dragon devouring its own tail. It represents the eternal cycle of life and death or wholeness. The other type of ouroboros that is hugely popular in tattoo subculture is one where a snake eats its own tail.

Why choose a Fullmetal Alchemist Tattoo?

Even by weird anime standards, the Fullmetal story is unique, and people really like the characters of Alphonse, Eric, and even the flame scarred pretty boy Roy Mustang. They’re interesting and iconic.

It’s no surprise the series has become a favorite in manga tattoo subculture, featured on Twitter and Facebook and popular in cosplay, wtf photos, gifs, and memes.

Click below for other awesome tattoo galleries featuring the best in Anime body art: