In every decade, we imagine what the future might look like. When the world celebrated the Millenium, it was hard to believe that we would ever make it to a time that was 20 years later, and everyone assumed there would be flying cars and matching silver outfits.

Whether you imagined the future as The Matrix or 2001: A Space Odyssey, the outfits always look the same, and they have what you might call the “futuristic” look. Lots of silver, minimalist, shiny, and with unique cuts.

Continue reading for a whole list of outfit ideas that will make you feel like Marty McFly in Back To The Future, but with much more style.

Will we still have ski slopes in the future? Maybe they’ll be on a different planet? Venus has some pretty big mountains right? Or is that Mars? Though this outfit might be a bit warm up there, so we may have to settle for tiny little Pluto.

This is the ski bunny look of the future with platform boots, red tinted glasses and a belt with chains that give it added texture. Not to mention, the fur hat to go incognito on bad hair days.

This outfit has major V for Vendetta vibes, and makes the wearer look as if they’re ready to overthrow an evil dictatorship in the future. The look takes on a military vibe with dark, heavy fabric and a sporty edge. The wearer could be fighting for their life in two thousand years, or running down the street in an action sequence with Will Smith.

This could be worn in day with combat boots or with the heels pictured for an evening look and dinner with friends. It’s urban meets office chic meaning you can wear it to work and get drinks with colleagues afterwards.

While this could easily be mistaken for a Little Mermaid halloween costume of the future, there has to be more than black, silver, and white hundreds of years from now. Futuristic looks don’t necessarily have to be basic, or minimalist, just as we have many different types of styles today.

What makes this a truly modern look is the tight, vinyl shorts that look like they were taken straight off the seat of a carnival ride. Zenon: Girl Of The 21st Century would have rocked this look on her space station while she danced around on stage with Prota Zoa.

The future is apparently colorful and bright, and this leotard is certainly not the average look in 2020. As if a graffiti artist designed it, this outfit could take you straight to the club, in the current year or a hundred years from now in outer space.
The see-through skirt thrown over gives some coverage while still showing everything off.

While most futuristic looks are imagined as darker colors or shinier silvers, this outfit is both minimalist and modern. The high neckline and vest on top take this from just a simple white dress to an innovative look that screams sophistication as well as ahead of its time.

Despite the somewhat retro look of the sunglasses, paired with this outfit they are getting a second chance at life. They seemingly fit into a future decade in which everyone would wear this as the standard, go-to uniform. 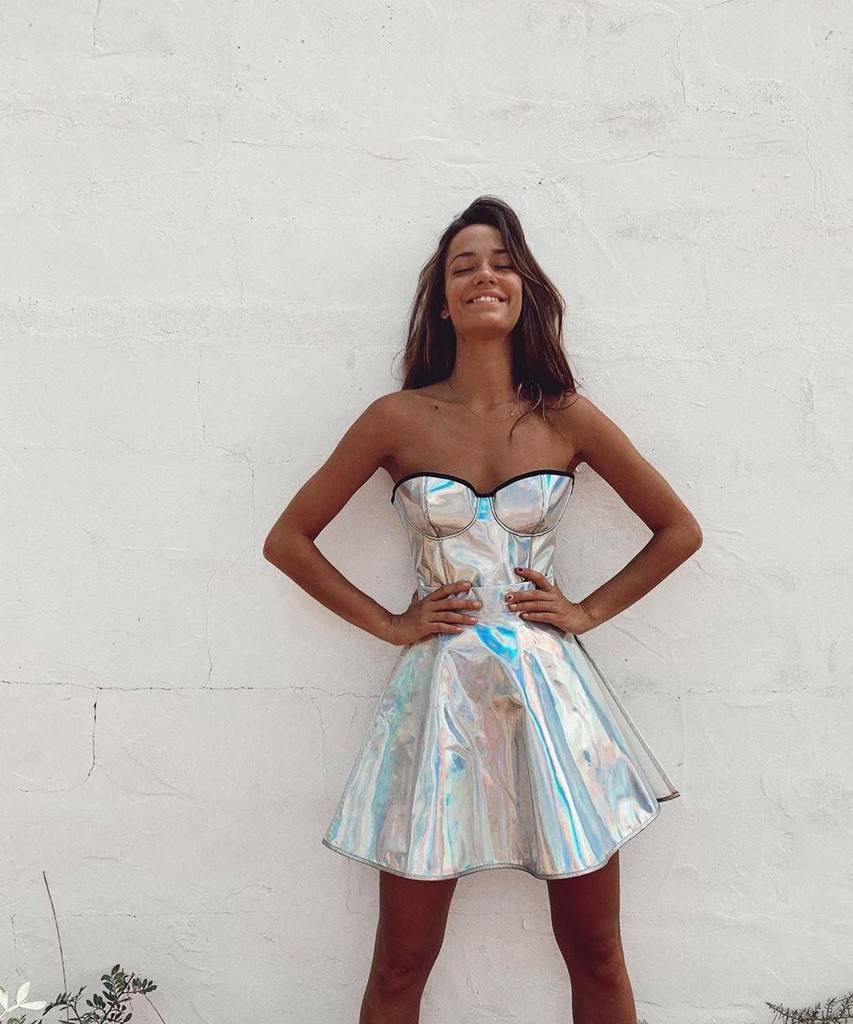 The old, stand-by party dress look has been taken to a whole new level in the future with iridescent fabric, a shape that looks like the wearer could soon turn into an evil fembot. While the top is a silhouette that has been worn for hundreds of years, it takes on a futuristic look with the looser, more accessible fit.

This dress looks like it could take you to a cocktail party in a thousand years, where you’ll be drinking space martinis and flying around the galaxy as a group activity.

Looking at this outfit you might imagine The Matrix; a character in all black, face covered, mysterious. An odd silhouette to the jacket takes this look from simple and minimalist, to alternative and modern. Paired with black leather boots, the style becomes futuristic rather than overtly modest.

This outfit would fit in any setting, from the big city to a small town, and anything in between. The best part? Nobody can really tell how expensive it is; these pieces could be bought at a luxury boutique or found at a thrift store.

Sun-bathing on Mars is clearly in our future if this outfit has anything to say about it. The very fabric of this hat and matching shirt just says “alien,” and who knows? Maybe in the future we’ll be chilling with Will Smith’s friends from the movie Independence Day.

Though this outfit clearly looks like it’s from many years from now, it could easily be considered retro when looking at the white, flared pants. Again, the future appears to be stealing some inspiration from the past. Will we still have vintage stores in a thousand years?

Futuristic doesn’t always have to mean looking like an astronaut or taking a stroll along Saturn. The look of the future is minimalist chic with clean lines, simple textures. and an attitude of not trying too hard.

This look could be taken straight off the streets of Paris, yet it could work in more modern times thanks to the flared pants, and the cutouts along the chest. This cream colored dream can be worn at the office, to brunch with your girlfriends, or even to a night out at the club (though do be careful with the red wine.)

What’s the best name for this outfit? Futuristic preppy? School uniform of the future? This look starts off with a button down and sweater that say, “I just threw this on, it was the first thing in my closet, and I’m not even trying hard.” But, it finishes with black leather pants and black ankle boots that say, “I’m ready to take on the runway, or a board meeting. I’m feeling like I could take on the world with this dominating style.” The black, the leather texture of the leggings, and the fuzzy, soft material of the sweater give the wearer of this outfit a forward-thinking vibe that looks way more creative than your average Instagram model.

This isn’t an average shirt, with a creative, somewhat exclusive look to it that appears as if the wearer just stepped off the runway. The design is highly futuristic, similar to the kind of uniform you would imagine people wearing hundreds of years from now.

Swanky, high waisted trousers take this from trendy, urban model to the office environment. The shoes add some simplicity to the outfit so it doesn’t look too “out there.” A purse with lots of texture is the perfect added accessory, pulling together the entire look. 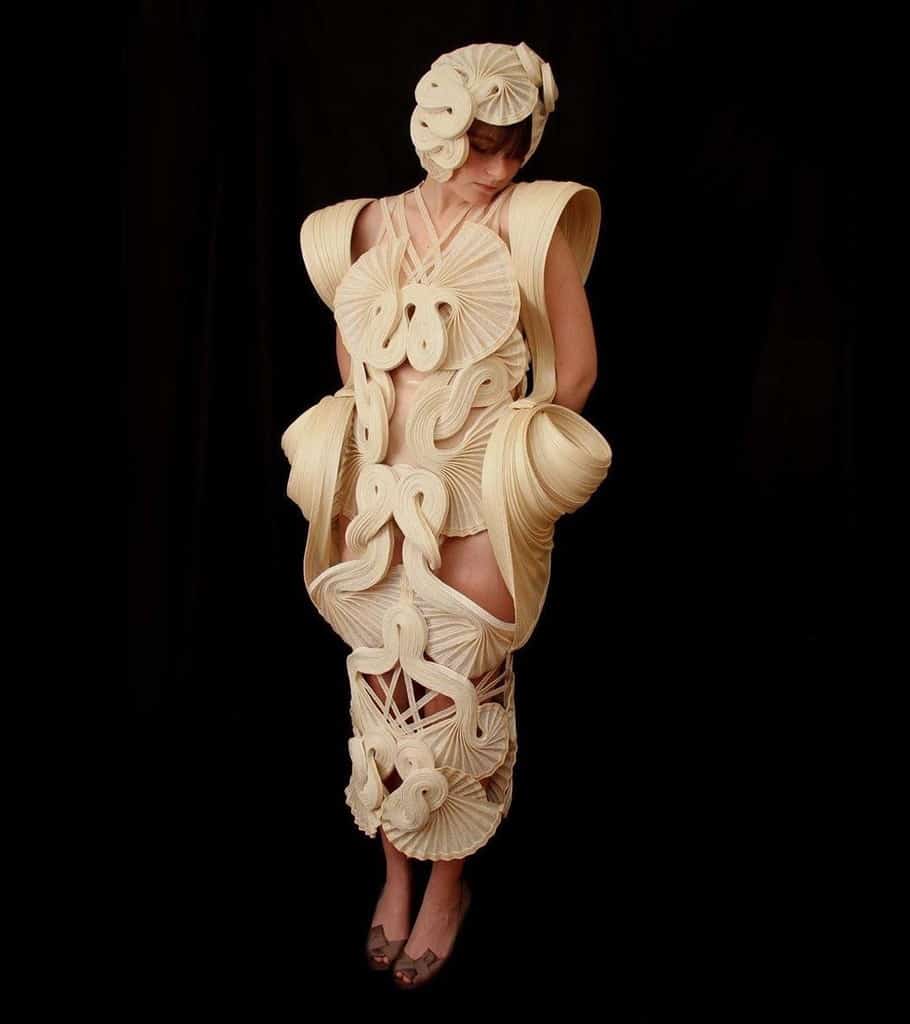 Pasta noodles or an alternative way of wearing a dress in the future? Futuristic fashion isn’t all about simple cuts, and outfits that look like a basic uniform that anyone can wear. It’s also about odd shapes, innovative styles, and new ways of wearing old stand-by looks.

Why wear a basic dress to a party that everyone else when you can wear something that looks as if it belongs in the year 3000. Futuristic fashion isn’t only about what we imagine it to be from the movies; it’s about new, creative ways of revamping the old. 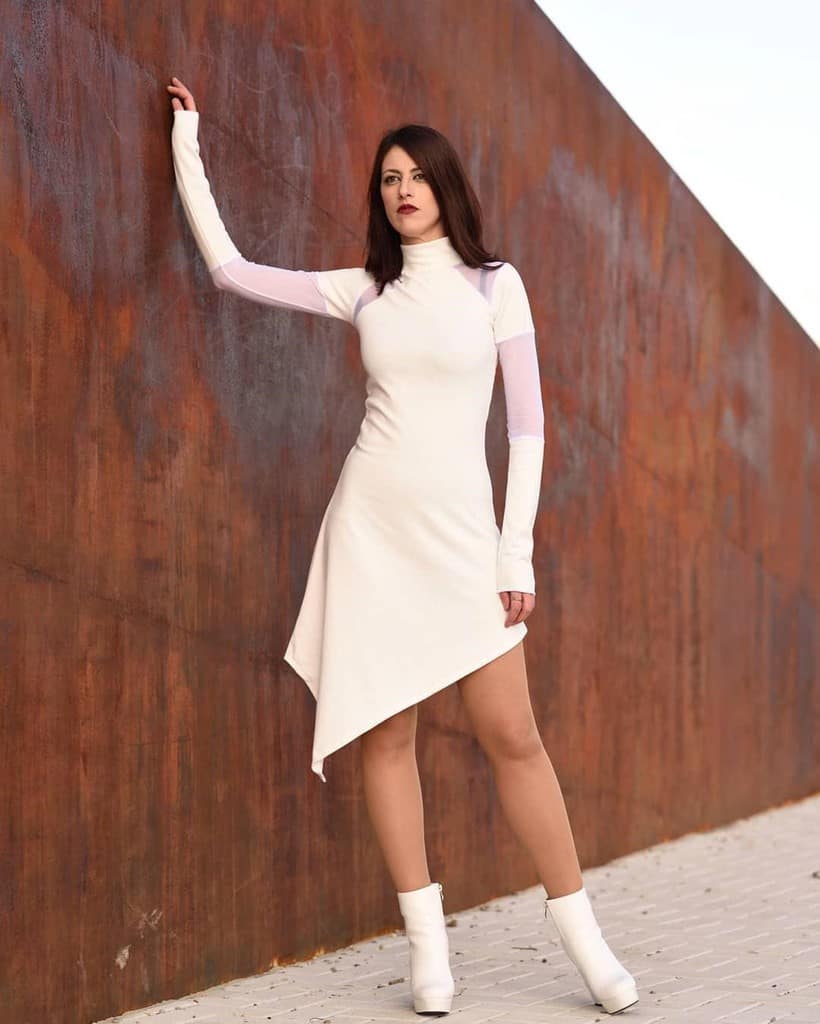 As with the times we live in now, it appears as if the future may look to the past for inspiration. This outfit could easily be worn in an Austin Powers movie, especially with the white, platform boots and major 70s vibes. Yet it could easily signify a futuristic look with the high neckline and cutouts around the arms.

Modern outfits always seem to take on a minimalist tone, and this does exactly that. However, the cut at the bottom of the dress shows this is something creative, and “new.” 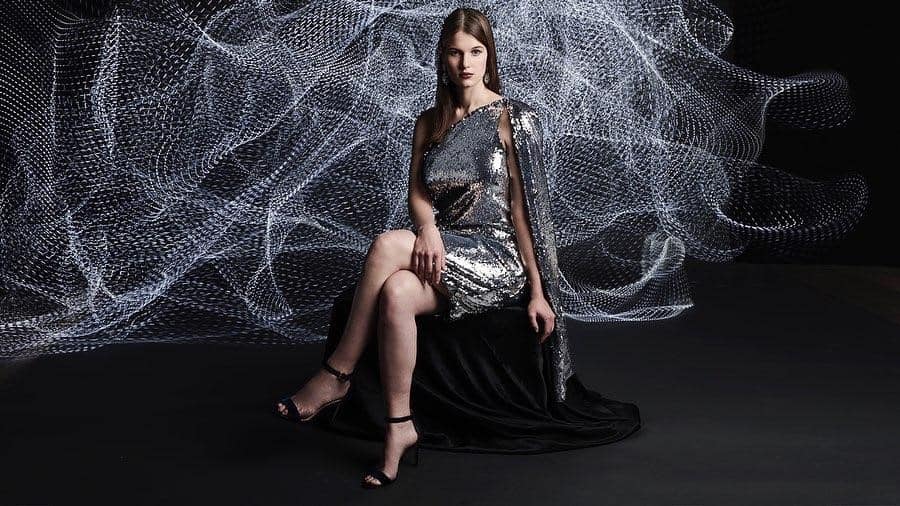 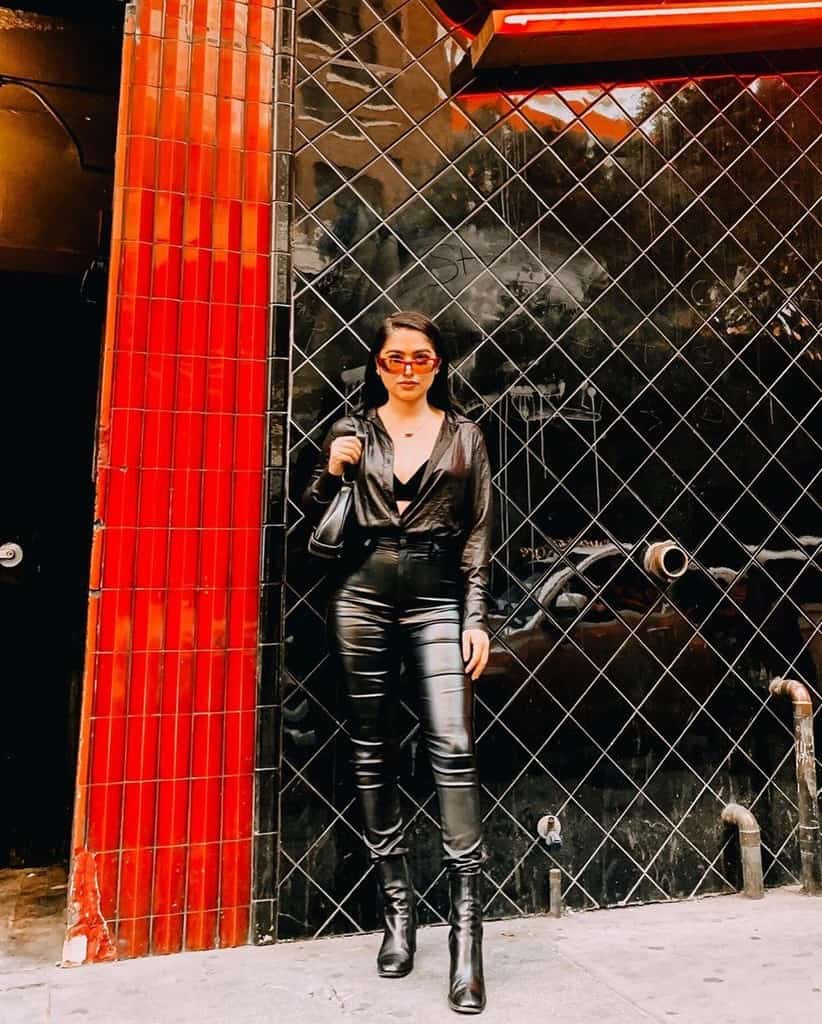 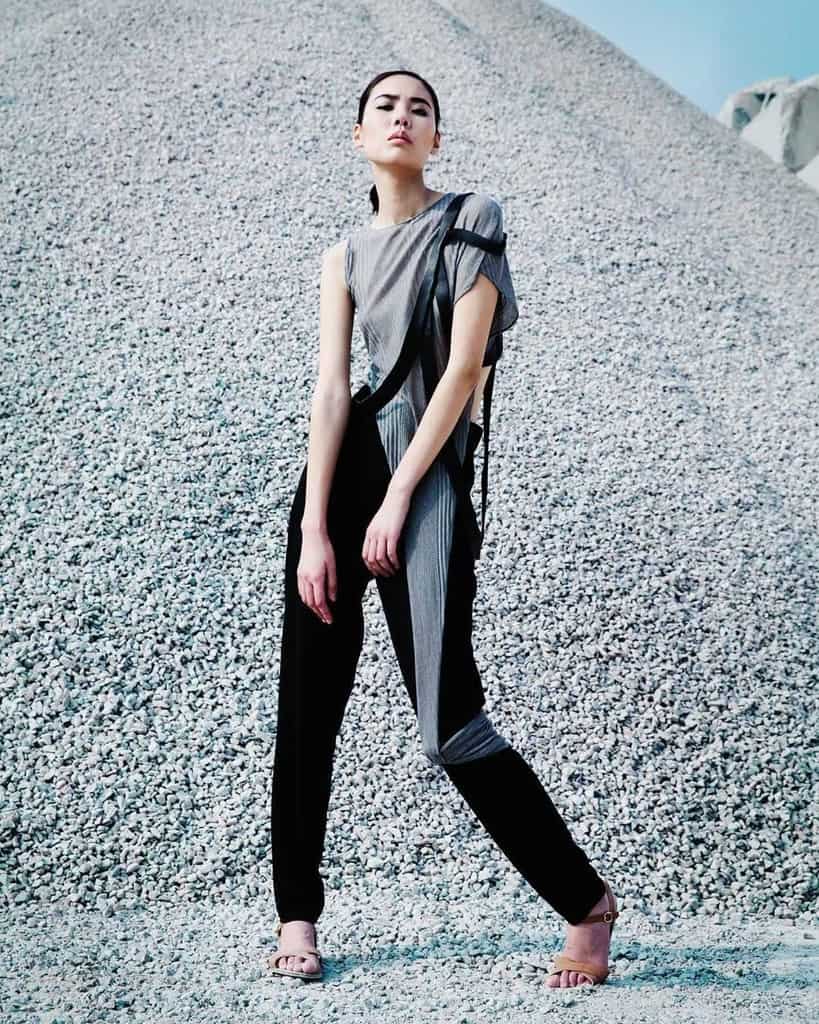 Did he just step out of The Matrix? Inspired by Neo himself, this look screams futuristic fighter. While it would be easy to disappear behind all the black, the texture of each piece separates everything, giving it a bit more style.

The is a sporty vibe meets urban look, that could take the wearer from the streets of Brooklyn, to the world of parkour.

This outfit looks straight off the runway, as it’s not something you would normally wear down the street on a daily basis. However, this is a futuristic outfit, and in a thousand years the world could be on the brink of extinction, and this outfit would certainly work in that kind of action movie sequence. 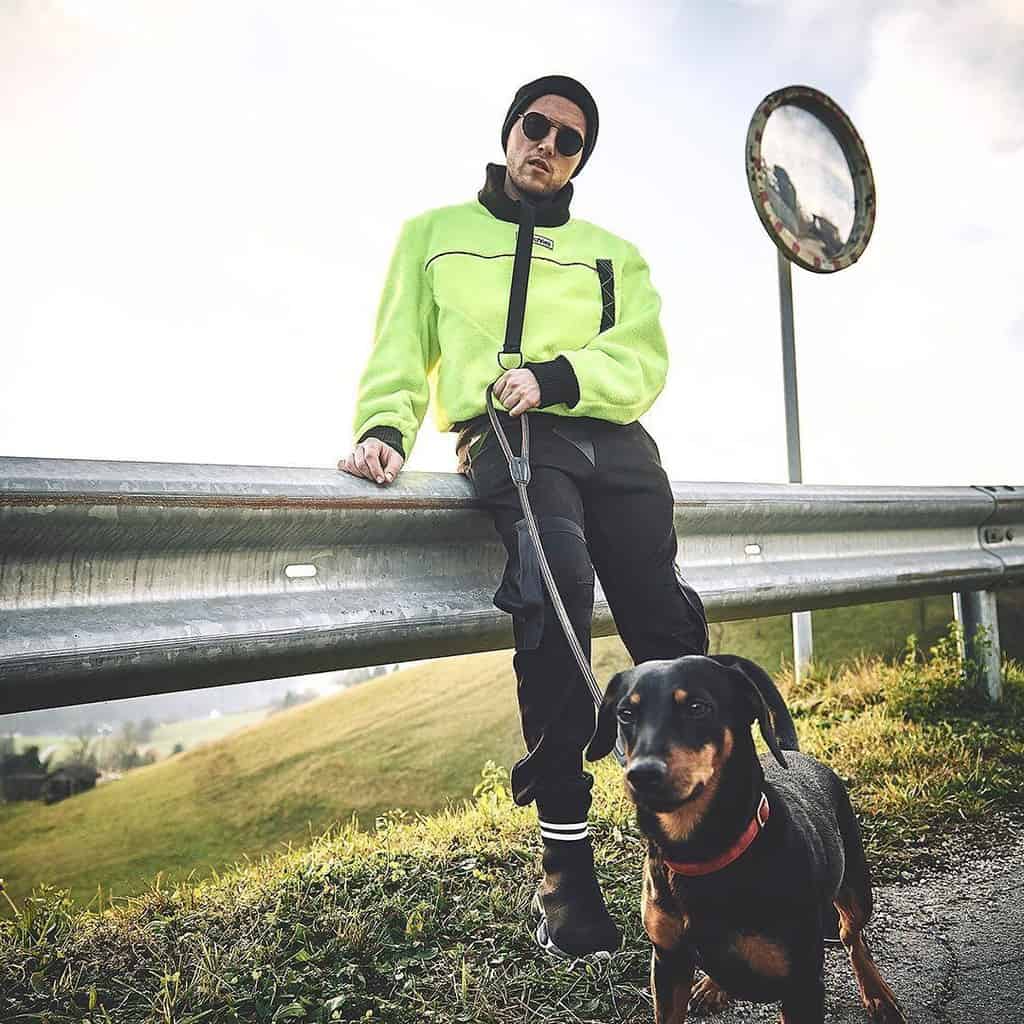 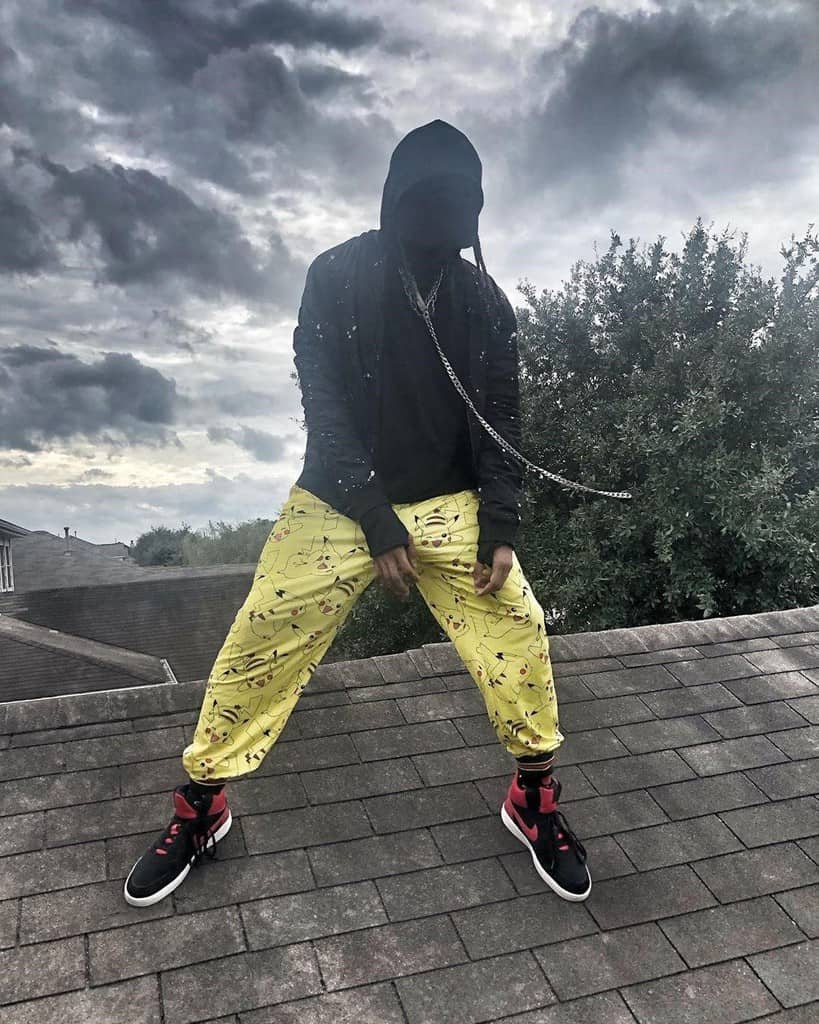 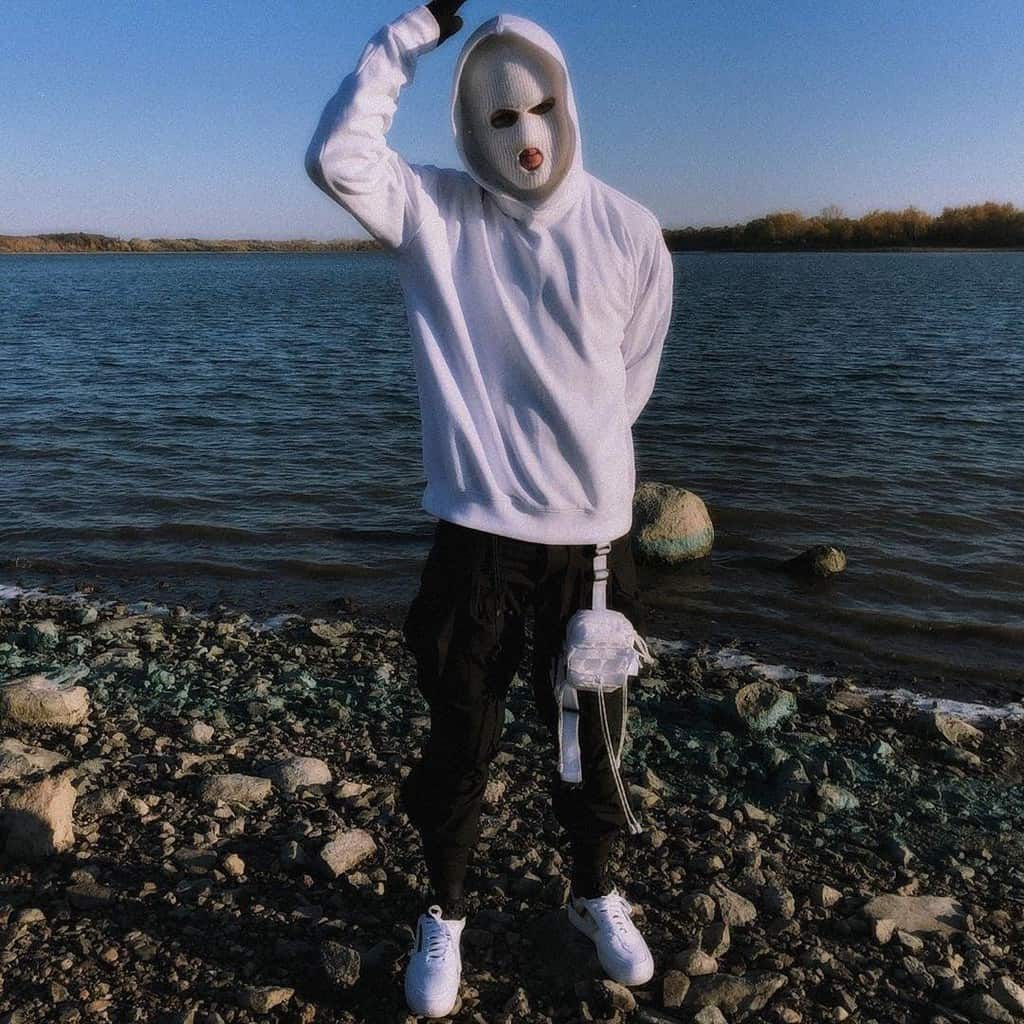 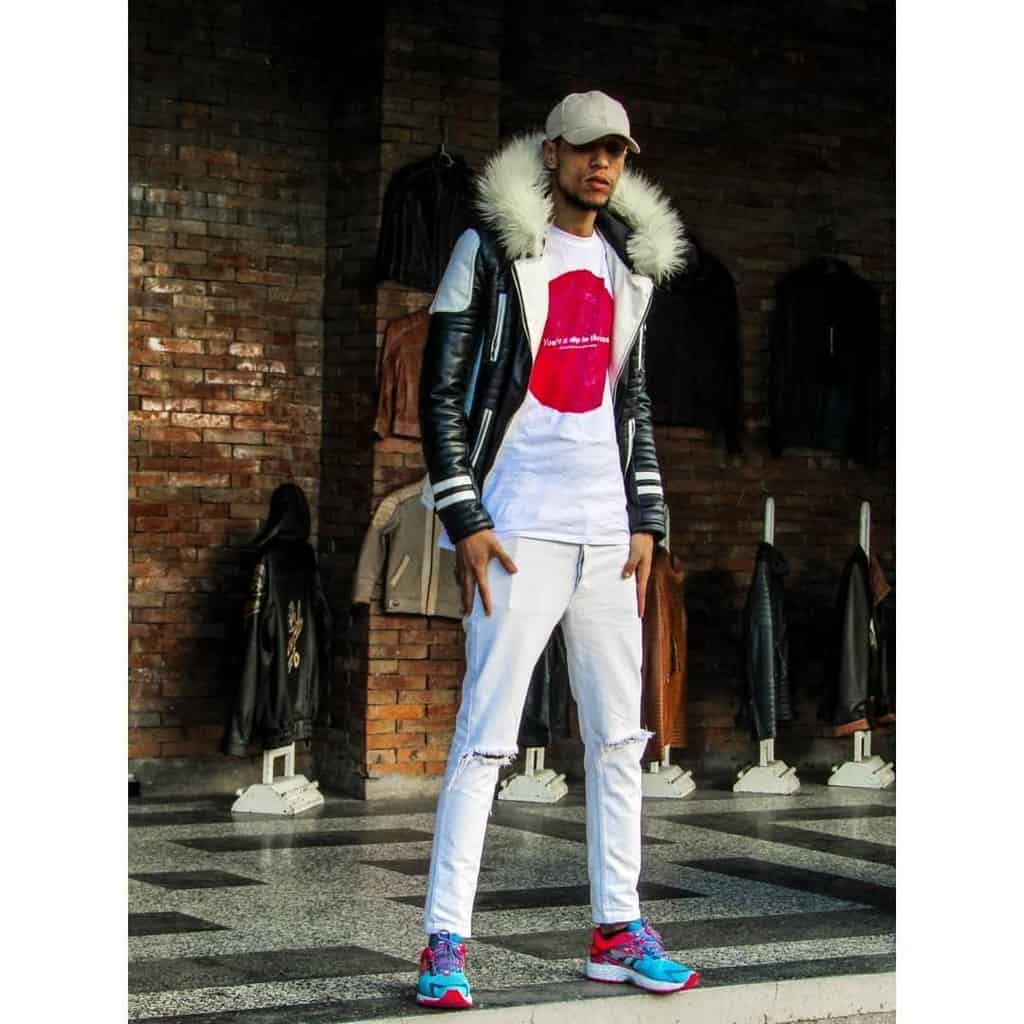 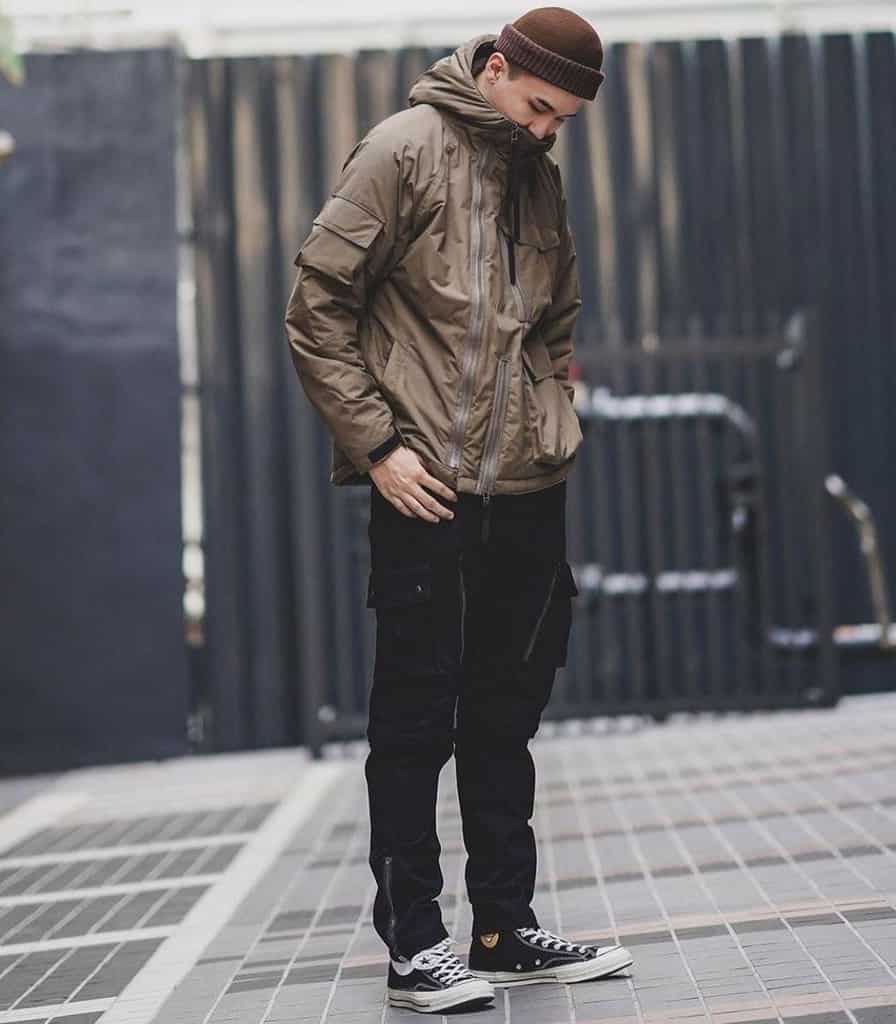 Taking it back to the 90s in order to look futuristic is why we love vintage stores and retro chic. The light wash jeans rolled up, and the white Nike sneakers are a definite throwback, but the turtleneck sweater and pink button down thrown over add a creative flare, especially the light, shiny texture.

The sunglasses give off definite Morpheus energy; it’s as if we’re just waiting for him to offer two different kinds of pills. 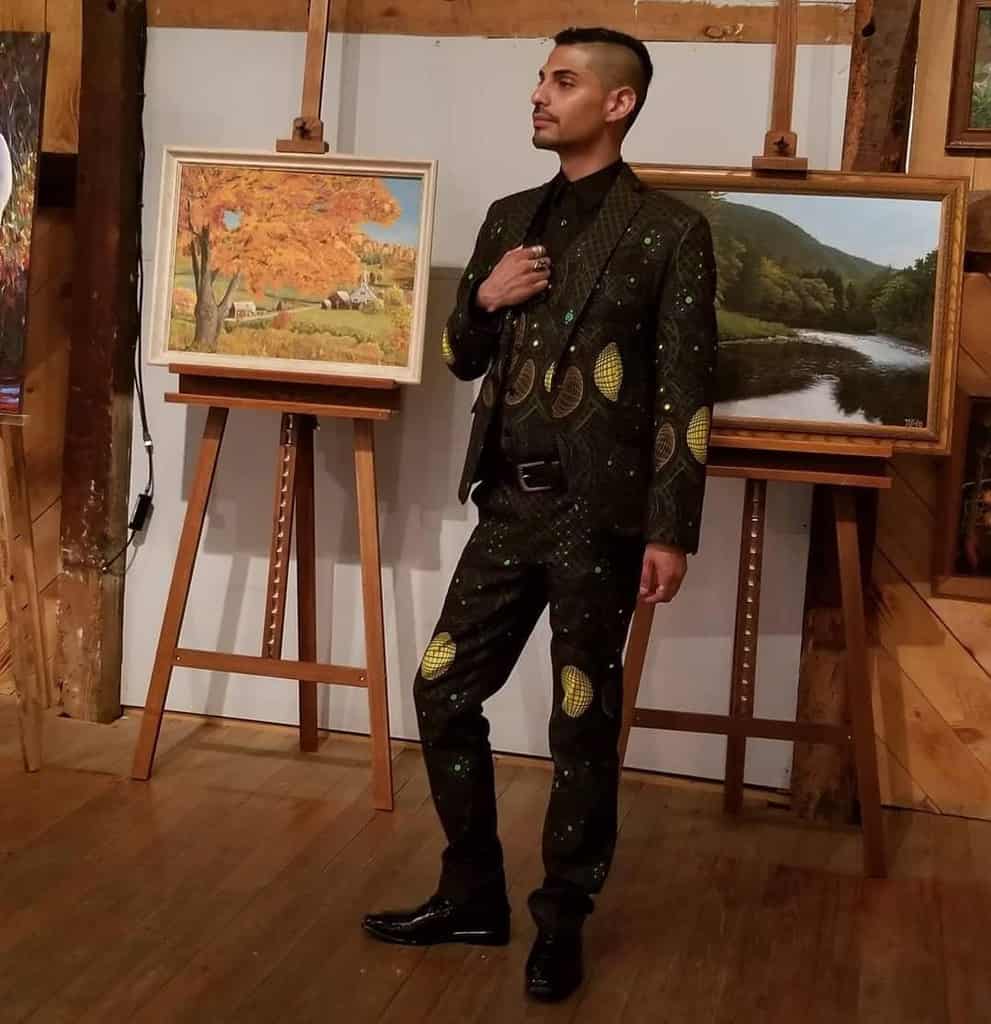