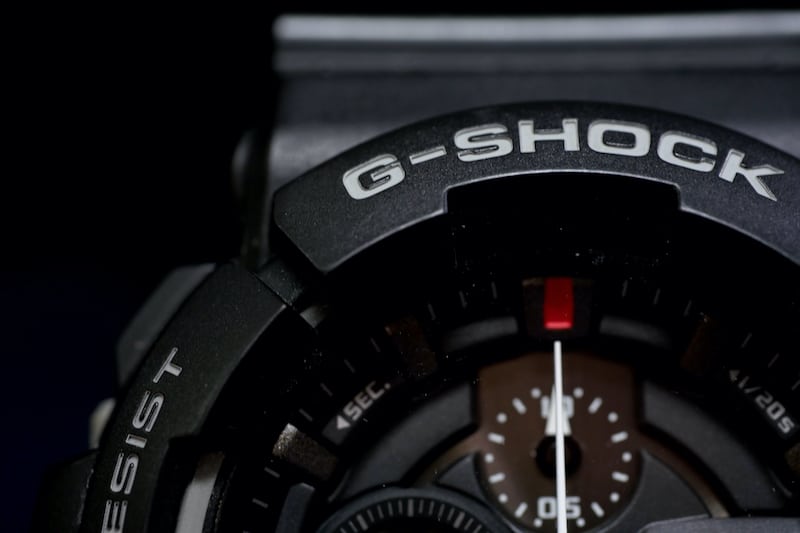 The History of the Casio G-Shock

Born with a unique vision in mind, Casio G-Shock represents much more than a premium quality watch. It’s a synonym for making a statement, achieving independence, and pushing the limits.

With 10-year battery life and a nearly indestructible design, G-shock changed our perception of watches completely. From an incredibly useful tool to a cultural phenomenon, G-Shock watches have seen it all. It’s a watch with a longstanding history and tradition that demands attention.

G-Shock was able to attract and keep an incredible board appeal. Outdoor enthusiasts, athletes, military and law enforcement personnel, fashion trendsetters, and gadget lovers can all find their favorite G-Shock model.

Here you will learn what inspired the creation of its innovative technology and how Casio G-Shock became one of the most recognizable brands of our day.

The Birth of the G-Shock 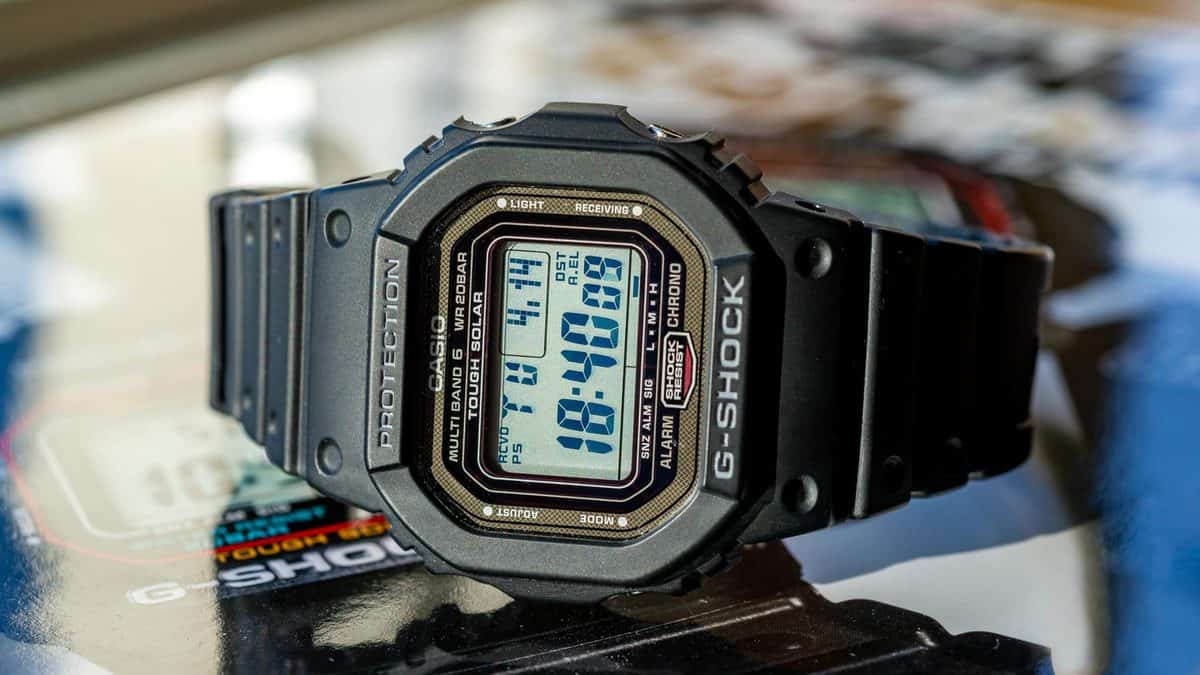 After a pocket watch given to him by his father broke, Casio engineer Kikuo Ibe was heartbroken. So, in 1981 he was inspired to create an unbreakable watch based upon three main factors.

He wanted it to be water-resistant (even on higher water pressures), resist centrifugal impact, and have long battery life. While at the time, it seemed that creating a product like this might defy the laws of physics, he was able to achieve his goals.

After working on the project for two years and producing over 200 prototypes, Ibe and his team were able to develop a product that was tough down to the core, thus marking the birth of innovative technology. Not only was the watch scratch-and waterproof from the outside, but it was also shock-resistant on the inside.

How were Casio Engineers able to create a product that defies gravity? Well, the answer to that is pretty simple. While visiting a playground, head engineer Ibe noticed a bouncing rubber ball. He realized that the center of the ball doesn’t suffer the shock from gravitational forces, only the exterior does.

Based on this model, and after two years of drop-testing, Ibe was finally able to visualize a unique shock resisting system that ultimately became the base of G-Shock watches. This basic design consists of a hollow case with the timekeeping module surrounded by a urethane foam cradle. Vital parts of the mechanism are made of quartz, and they are also protected from impact with the same cushioning material. This first official G-Shock was the DW-5000C.

Protruding points such as the buttons and the glass are made of urethane, so the watch can withstand impacts from any direction. The engineers also made sure that the strap also helps isolate the watch from shocks.

Not only were these features able to protect the G-Shock from impacts, but can also counteract high G-forces and even heavier vibrations. This combination of features was a deciding factor for naming the watch as well.

G-Shock essentially stands for the gravitation shock one is subjected to when falling. Therefore, Ibe created a watch that would remain working after any fall its wearer can suffer and named it accordingly. 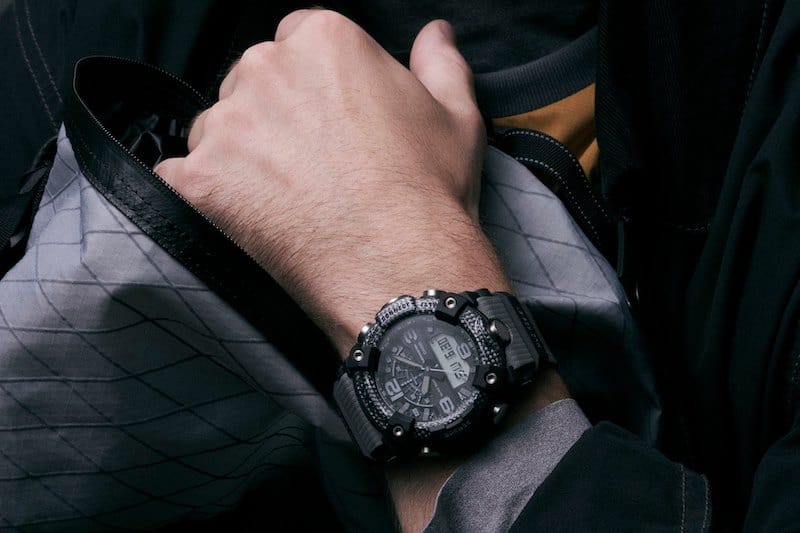 Since its large, square case was designed with practicality in mind, G-Shock watches weren’t considered particularly fashionable at the time of their release. Because of this, the sale of G-Shock had a slow start.

Only after an ad in 1984 showed an American hockey player using the DW-5200C model instead of a hockey puck had the public begin to gain interest in it. It took more than a year for G-Shock to become popular among outdoor enthusiasts, police officers, and firefighters in North America.

Slowly but surely, it was tested by many people in a wide variety of extreme situations and has since become known as the world’s toughest watch. Over time, the design of its protective case has improved, but its ability to withstand extreme levels of shocks stayed the same.

In 1990, the DW-5900C model had an innovative Tri-graph liquid crystal display, which launched the watch into American pop culture. After being worn by famous hip-hop artists and skateboarders, the youth was taken with the allure of G-Shocks.

Later on, even the collectors begin to take interest in the G-Shock, and the watches have become much-coveted pieces. From the famous square design presented in the DW-5600C in 1987 to the models featuring analog and later digital technologies, there isn’t one that’s not wanted by a watch collector. Interestingly enough, it took the watch’s rise to this level of fame in North America before the public of its homeland of Japan even noticed it.

Since then, Casio G-Shock’s have been made even more fashionable, and not only because of their looks. Collaborations with artists and streetwear designers such as Stussy, Takashi Murakami, Bathing Ape, and Maison Martin Margiela made it possible to create countless limited edition G-Shocks. Many of these were (and still are) sold exclusively in Japan, which only increased their value on the Western market.

Perhaps the most popular version amongst collectors is the Casio Frogman line, which is also part of the Master of G series. This includes all the watches from the “Man” series: Frogman, Antman, Gulfman, Mudman, Riseman, Gaussman, and many others. 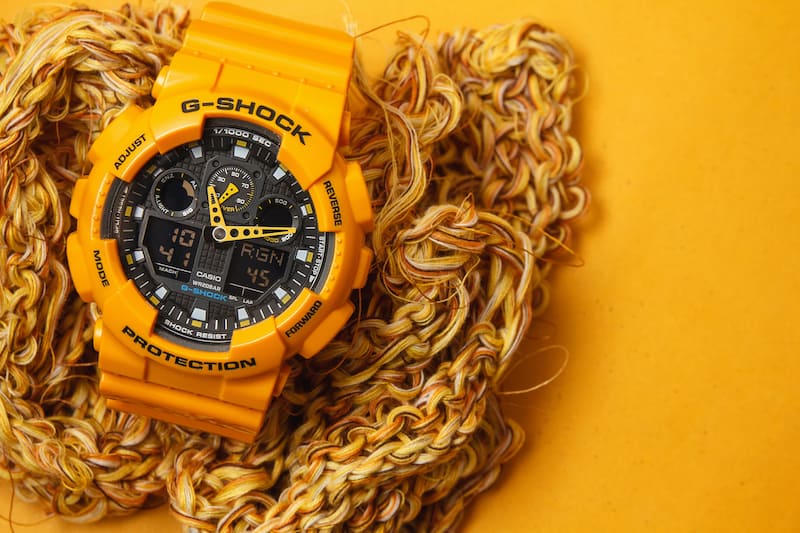 While G-Shock enjoyed wide popularity due to the now traditional collaborations, its creator knew that in order to keep the sales up, they had to come up with new innovations. Capitalizing on the brand’s mainstream acceptance and newly gained reputation as an innovator of streetwear fashion, Casio engineers decided to place their focus even more in the direction of style.

After realizing that the resin watches only matched casual outfits, Kikuo Ibe set out on creating metal watches that could be suitable to wear on formal occasions as well.

First, they decided to launch a line of smaller, stylish watches for women and the first Baby-G, the DW-520, was born in 1994. Just a year later, with the model DW-6900, Casio came up with what’s since become one of the most iconic cases of all time.

1996 marked the release of the MR-G series – these watches could truly match with any outfit you can imagine wearing. These were joined by analog models in 1997, and the foundation for a new era of high-end, luxury-style watches was laid.

After a couple of years of focusing on implementing the newest technical developments, in the late 2010s, Casio began to expand their signature lines like the Rangeman and the Frogman series.

This move, coupled with the release of the full metal GMW-B5000 model, gave G-Shock yet another big boost of popularity. Of course, part of this success is also the result of the company’s continued promotional efforts and willingness to invest in new, functional technologies and collaborations with artists, athletes, and fashion designers worldwide.

See more about - The 10 Best Affordable Watches For Men 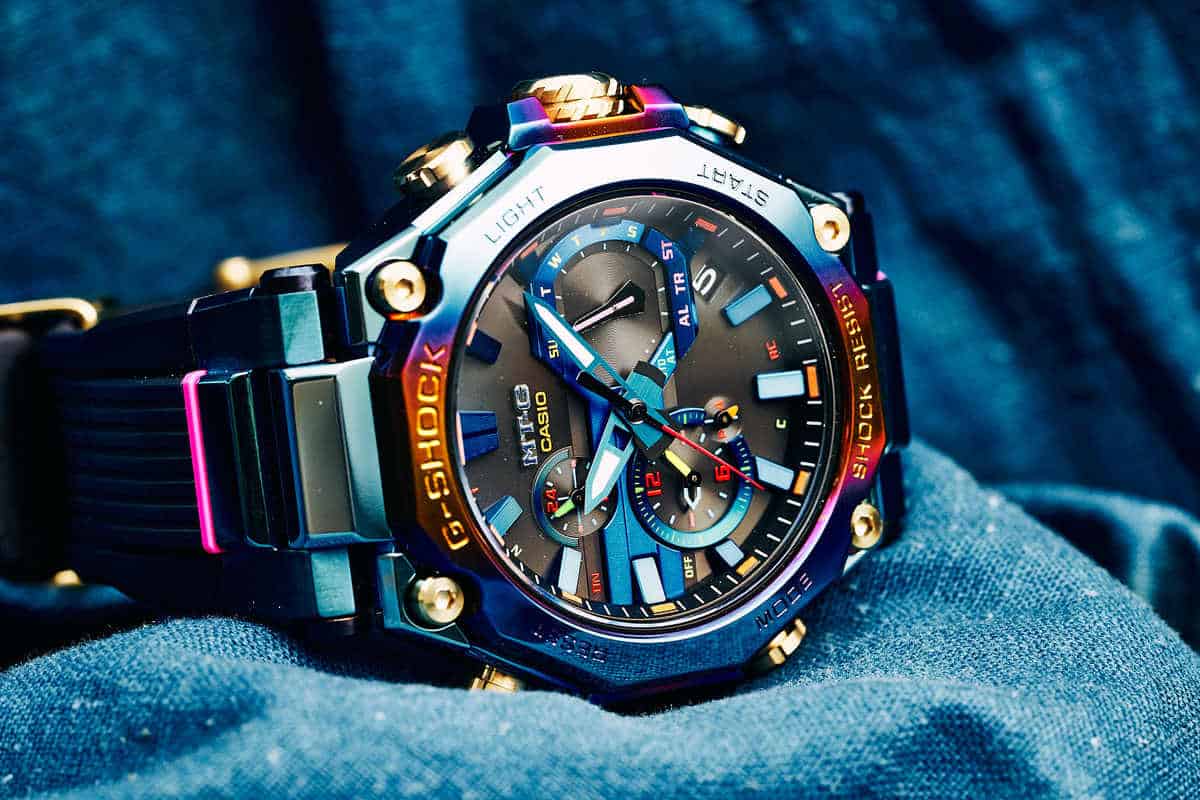 While the stylish G-Shock models enjoyed wide popularity during the better part of the 1990s, its creator knew that in order to keep the sales up, they also had to come up with new technological innovations.

In 1993 Casio released a full water-repellent diver’s watch, the asymmetrical Frogman DW-6300. It had a 20-atmosphere resistance and was the first-ever ISO-certified diver watch for 200-meter depths.

It was quickly followed up by the first titanium Frogman, the DW-8200, in 1995. In 1997, Casio redirected their focus to the basics of shock resistance, and the engineers have again begun experimenting with new technologies to create an even tougher watch. New models, such as the GW-300, began to evolve in both performance and function.

The first solar-powered member of the Raysman series, the DW-9300, was released in 1998. This was the first Casio watch employing the now popular Tough Solar feature. 2000 marked the appearance of the GW-100, the first radio-controlled G-Shock.

This later evolved into today’s Multi-Band 6 feature present in most digital G-Shocks. Over the 2000s, features like resistance to low temperatures, dirt repelling, built-in pressure, and temperature sensors were developed to keep up with the market’s demand.

Released in 2002, this G-shock was equipped with a more advanced version of the traditional radio-controlled technologies. And on top of that, it had a solar-powered option as well. Its successor, the GW-9200 model released in 2008, could receive incredibly precise, time-calibration radio signals from six different radio stations worldwide.

In the 2010s, Casio began to focus more on analog models, and a noticeable resurgence of the original G-Shock features happened with the introduction of the GA-100 and GA-110 series.

In 2012, Casio’s first Bluetooth-enabled G-Shock was released. This function made it easier to connect their watches with a smartphone, entering the G-Shock into the world of early smartwatches. In 2013, the company marked G-Shock’s 30th birthday with the launch of the Smart Access system, enabling an even smoother operation for a wide range of old and new functions.

Later on, G-Shock also continued to develop digital models like the GW-9400 Rangeman. This watch was equipped with the series signature Triple Sensor and became one of the best-selling models of the last decade. 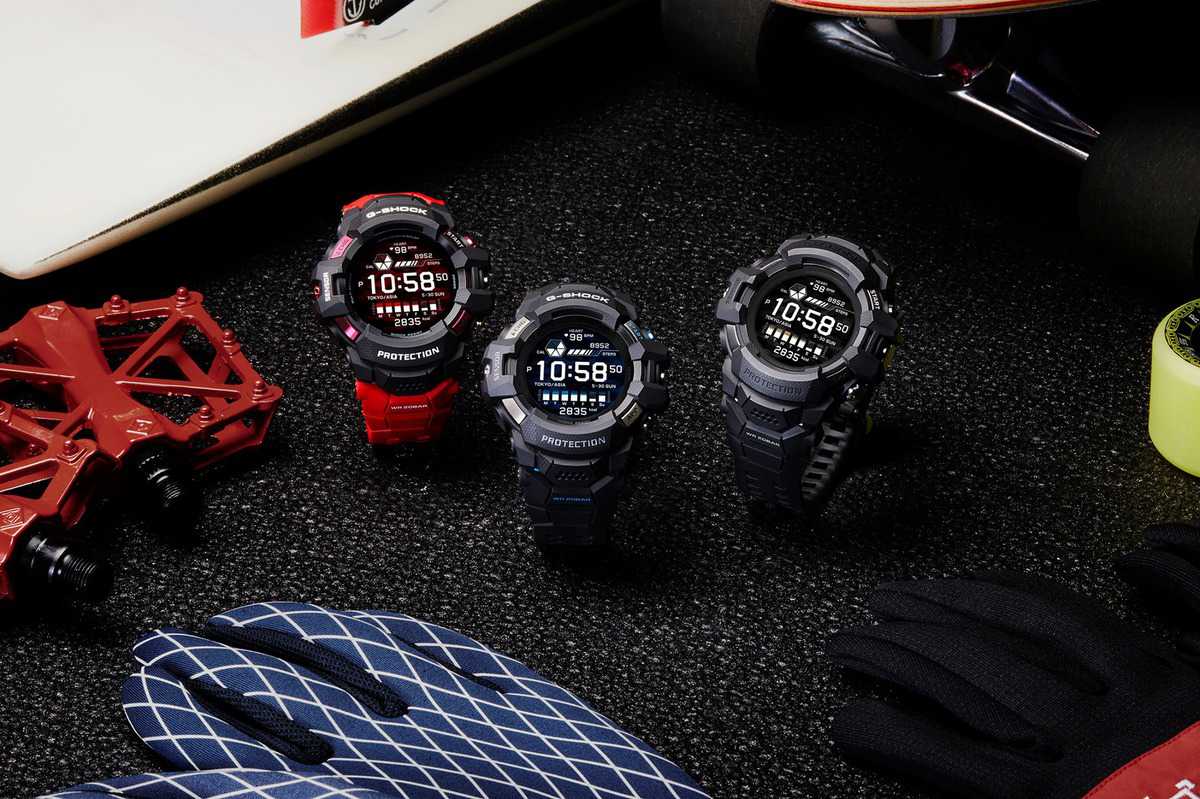 As of 2014, Casio put a considerable amount of time and effort into developing a hybrid time acquisition system. The first model having this feature, the GPW-1000, was released that year.

This watch can receive time-calibration signals from six radio transmitters and GPS satellites with equal efficiency. In May 2017, Casio released the GPW-2000 Gravitymaster, featuring the Connected Engine 3-Way module. Apart from receiving radio waves and GPS satellite time calibration signals, this model was also able to pair with a smartphone and adjust the time through its time servers.

Looking into the future, Casio promises to keep up with the tradition of combining new technology with a dependable structure. G-shock creators also want to make sure that besides the limited edition designs that cater to collectors, their watches will be able to meet the needs of an even wider spectrum of users.

Developing their ever-popular Frogman series seems to be the best way to combine the useful with stylish. After all, Frogman dive watches are one of the most resilient watches in the world. They already come in many different colors and styles, however, the engineers are still constantly experimenting with new materials to expand their customer range with the Frogman. This series had the first G-Shock made from titanium as well.

Beyond street style, Casio creators are looking at taking the Frogman series to the luxury market by using artistic designs and high-end ingredients. The MRGG1000HT, an 18K gold classic G-Shock decorated with a unique technique, is the first, but certainly not last, effort towards these goals.

Of course, Casio engineers will never stop pursuing usability either. They have an ongoing plan to further develop the Smart Access system and make a more practical watch than they ever did before. 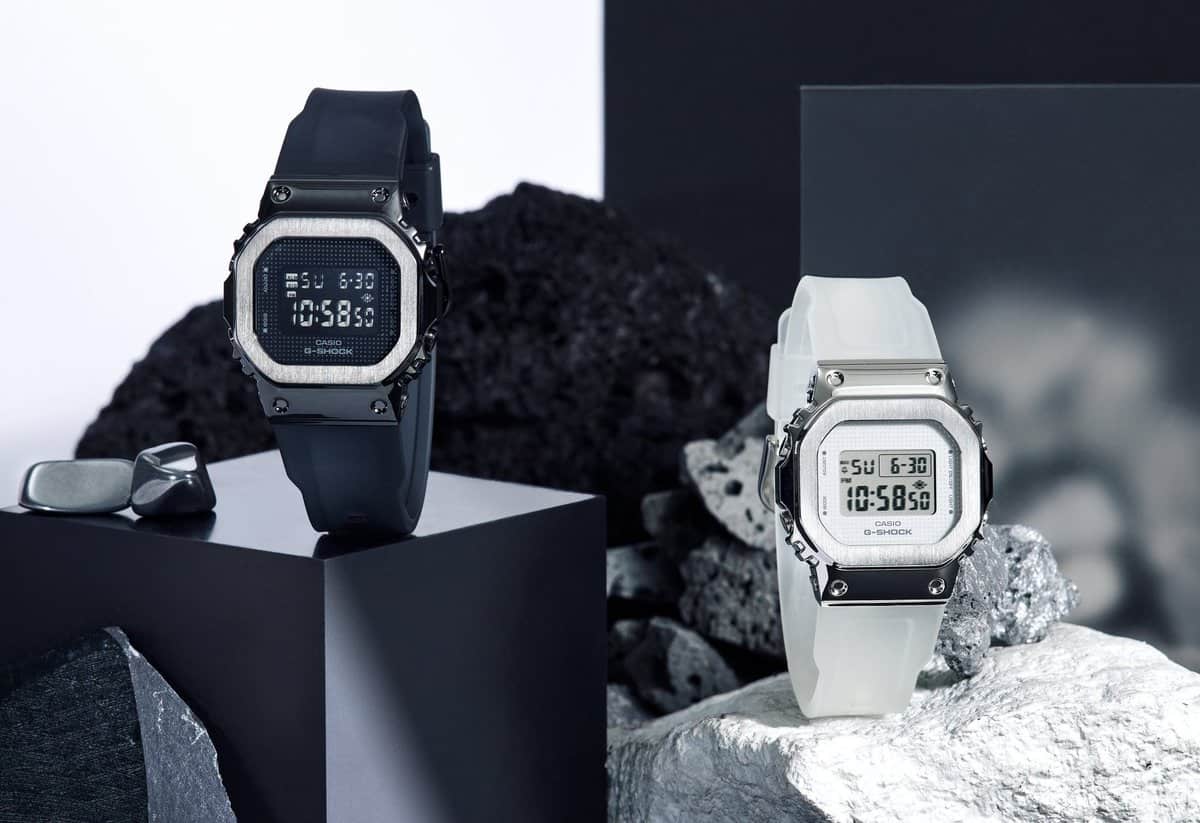 It’s safe to say that nowadays, every serious watch collector has one G-Shock in their collection. Many of them have one statement piece from each year and they always have hundreds of models to choose from.

Even if you aren’t a collector, you must appreciate the appeal of this watch. After all, G-Shock didn’t develop from a simple challenge for making an unbreakable product to one of the most successful business endeavors for no reason.

The rate that Casio is able to come up with new additions is astounding, not to mention that many of these new innovations were developed with groundbreaking technology. While they always tried to stay true to their original mission, the creators of G-Shock still managed to cater to everyone’s needs.

Apart from being equipped with sensors for calculating directions and barometers for measuring altitude, the G-Shock is also useful for measuring temperature, radio-controlled atomic timekeeping, and has many more great functions. Not only that, but it was the first Bluetooth-connected watch that ever existed.

When it comes to the future, Casio engineers are still promising us more. They are constantly working on taking things to a new level with modern materials and even more options for collectors, and we can expect many more iterations of this special watch in the years to come.