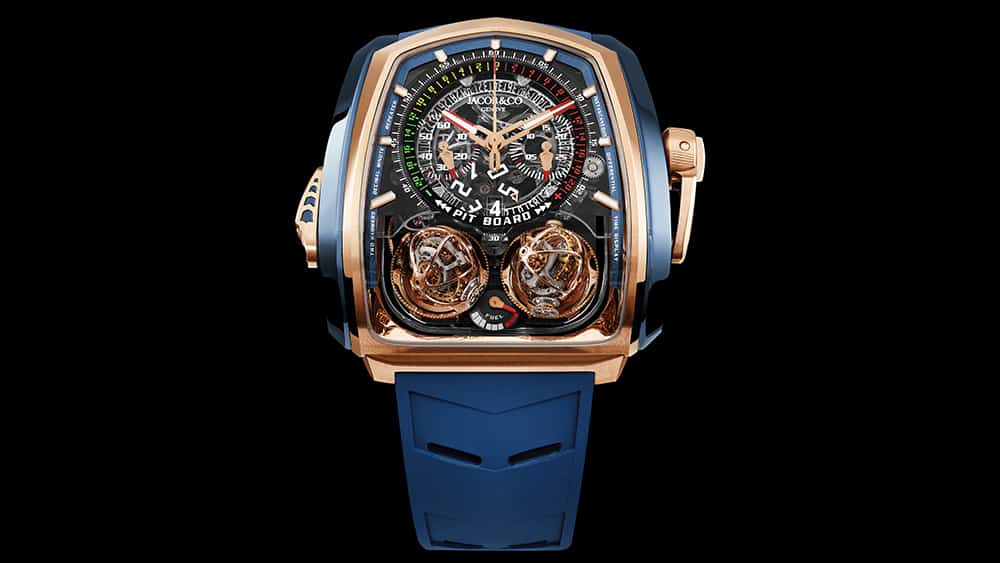 Jacob and Co’s Twin Turbo Furious Watch is sure to be a hit with fans of high-performance cars.

A true homage to high-performance vehicles, the Twin Turbo Furious Watch is worth Jacob and Co’s $580,000 price tag for those hoping to get their hands on a hypercar-inspired piece with two high-speed triple-axis tourbillons. In a bold blue titanium case, it packs a punch.

Last week, the watch was added to the roster by the New York-based manufacturer, with a larger-than-life case of 57 mm by 52 mm made of 18-karat rose gold. Meanwhile, the dial is outlined by a blue rehaut made of Neoralithe, a resin that’s UV, thermal, and shock-resistant.

The series pays its respects to hypercars as evidenced by the pit board and fuel gauge settings that are sure to send wearers and collectors cruising down memory lane upon spying the settings on the dial.

Following the pack, the watch also features an anti-reflective sapphire crystal casing that reveals all the inner workings of the timepiece’s movement from both the caseback and the openwork front.

The Twin Turbo Furious relies on the JCFM05 manual-winding tourbillon movement like the other series three models, and it is made of 832 individual pieces. Many people are mesmerized by the two high-speed triple-axis tourbillons, decimal minute repeater, and monopusher chronograph.

Additionally, there is a reference time differential function. The movement means that a 50-hour power reserve is on standby.

The first Twin Turbo Furious took the world by storm in 2016 at Baselworld. It was celebrated for being the world’s first watch to combine two triple-axis tourbillons and a minute repeater.

Today, people still respect the construction of the watches as they provide a quick way to compare two elapsed times. The pit board is supposed to reflect the tie to the car world.

Like an old school pit board, the reference times can be set manually by employing the pulled-out, unfolded crank. It moves a rotating disk and central display to set the reference time. Using the monopusher, the elapsed differences should be easy to spot.

It’s not the most new-fangled way of doing things, but that is all part of the charm. In classic motorsports, a good throwback can go a long way.

See more about - The History Of The Rolex Submariner