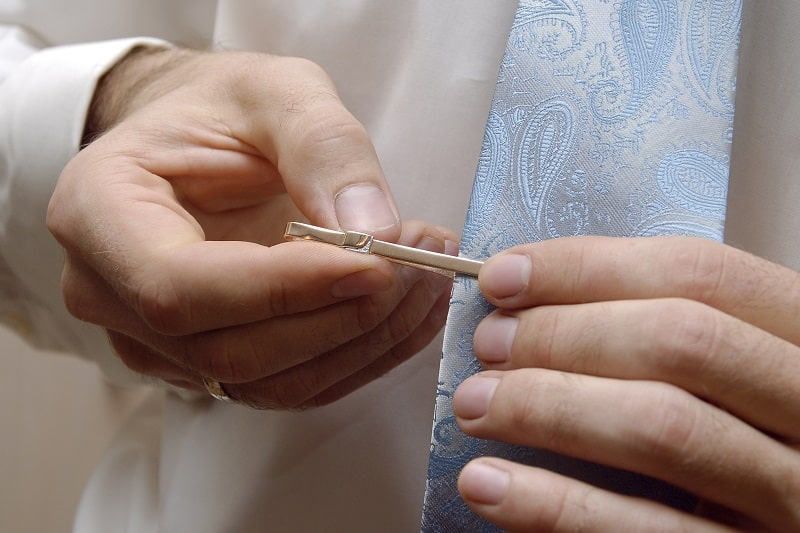 Chances are you’ve seen another man wearing a decorative and fashionable tie clip, and perhaps you may have wondered how these necktie accessories can enhance your own style. Yet these clips, otherwise known as tie slides, tie bars, or even tie clasps, don’t just solely improve our style, instead, they serve another useful purpose. Tie clips help prevent your tie from moving around, and since they’re tucked into the underlying shirt front, you’ll have a straightforward tie and a uniform appearance.

Not only that but there’s also a peculiar history lesson that you might have heard if you’ve been accustomed to wearing neckties in the car business. It’s the horror stories of salesmen’s ties getting caught into the car’s fan after opening up the hood to show a customer. Which of course brings us to the saying, who knew having style could actually save your life?

Before Tie Clips and Bars There Were Neck Tin Pins 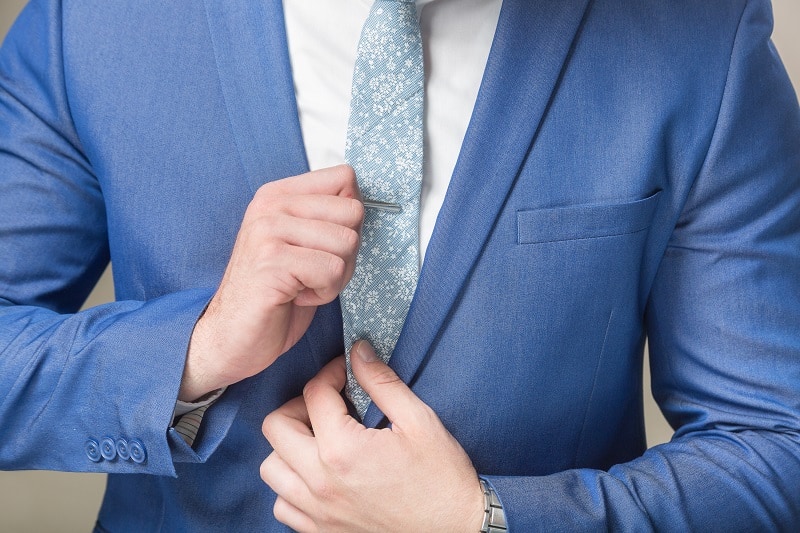 The true history behind these tie clips is that they actually weren’t the first tie jewelry invented. In fact at the start of the 19th century, wealthy English gentlemen used to wear a tie pins during the time period. Also called stick pins, these became really popular in the 1870s when they shifted their way into the lives of the American male culture. Shortly after, men began wearing all sorts of decorations on their tie pins, like animal heads, crossed pipes, shields, and even odd figures which were out of the norm.

Yet along with this creativity came jewelry decorations that were truly one of a kind. In return people started filling a tie pin patents on a grand scale to protect their designs. However what this led to was the start of some really interesting components being attached to the tie pins. In one instance, there was a patent design which had a concealed lead pencil point on the shaft. In another there was a drop of radioactive material in a star motif disk-like head. 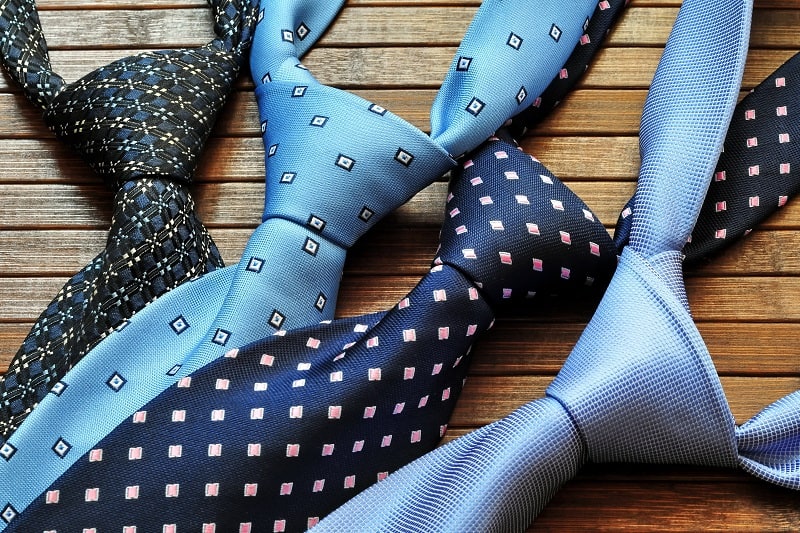 Now for tie clips themselves, these became popular around the 1920’s, which was mostly due in part to straight ties being produced from silk. This material was more delicate, and of course more fashionable at the time, which lead tie pins to become more or less forgotten about.

These tip clips had also solved the issue of gravity and wind, without the risk of unraveling the tie as tie pins had done in the past. And with this new U shaped metal bar, it let men simply slide these flat pieces in between both sides of the tie. Yet while it was originally intended to keep both tails of the ties together, men realized that by clipping it to the shirt, it served an even greater benefit, hence the tie clasp. So not only did these tie clips work to protect the tie, but they also kept it from swinging around away from the body.

See more about - 16 Different Types Of Tie Knots For Men

Tie Clips for the Generation of Men Today 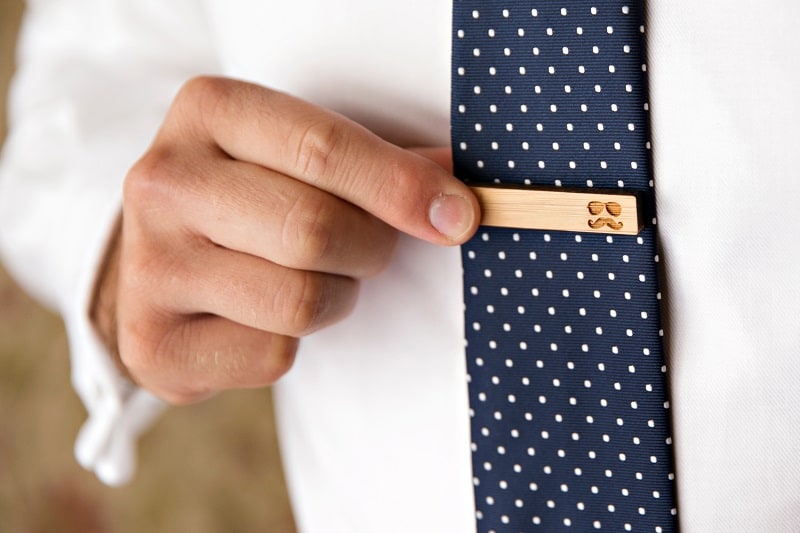 If we fast forward nearly one hundred years in the future, it’s the exact same method that fashionable guys are currently using today. However if you’re wondering why there’s been no change over the years, it’s because they’re so practical and straightforward; men appreciate that. As well if aren’t so much into the fashionable simplicity of it, remember tie clips are also serve as a major safety precaution for some workers. You’ve read about the tie getting caught in the car fan; however men who work in factories and around major machinery with moving parts can also benefit from them.

In fact, almost every guy can if you consider the number of working trades and industries that might require a man to wear one. Because you certainly wouldn’t want your doctor’s tie to brush you with germs and bacteria, nor would you want a restaurant server’s tie in your soup!

The Style and Fashion of Men’s Tie Clips 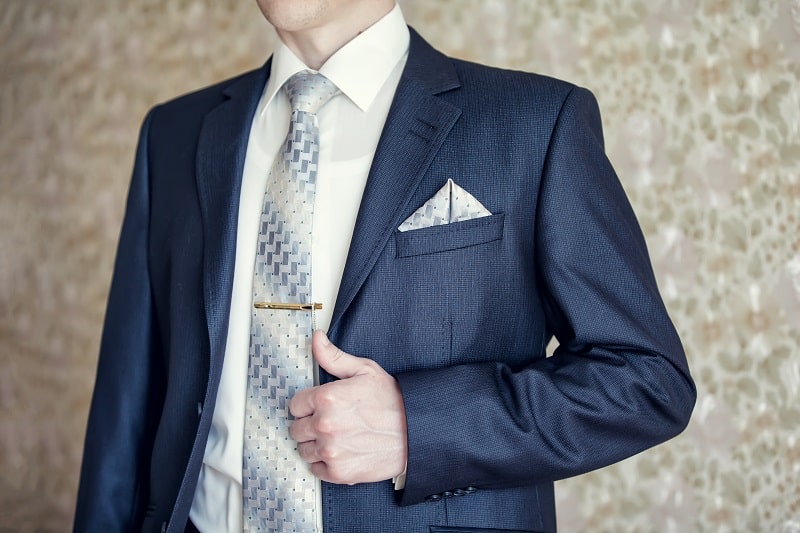 Tie clips have come a long way from the elaborate jewelry designs and precious metals and stones that were originally only worn by wealthy individuals. Today every man can afford them, and with an endless number of designs, they’ve transitioned into a more novelty item. Yet it’s a big difference from the past, because in the 20’s most of those tie clips seemed to serve as classy artwork you wore.

Not to mention they were worn to display and distinguish a person’s membership or status within a military, club, or group. And if you consider where we are at today in terms of their meaning, perhaps we have lost the traditional values. However it could also mean that we’re simply just experimenting with design, the same way men did in the 1870’s during the tie pins popularity. 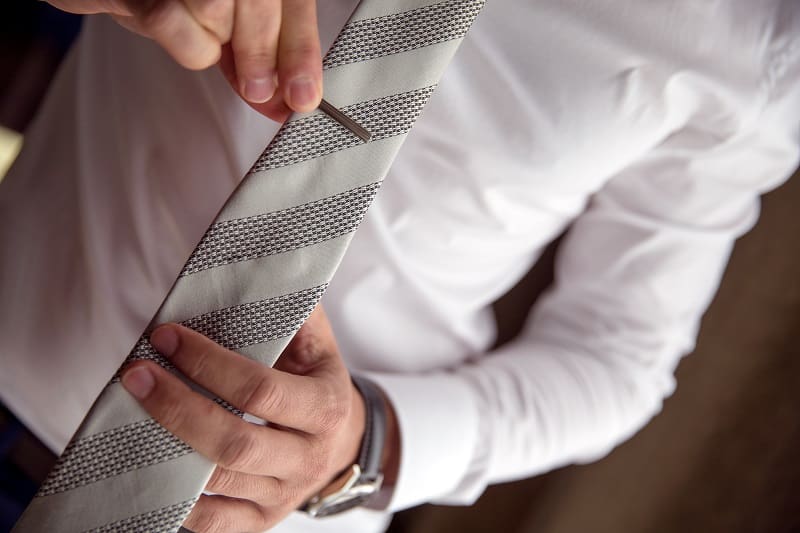 Yet now that we have covered the traditional designs of tie clips, let’s talk about picking out the right style for today’s fashion. There are literally thousands of tie clips to choose, from handmade ones to ultra-expensive and luxury logo-bearing ones. However for the most part when you’re wearing a tie clip, remember to consider that it should fit the theme of dressing sharp.Most commonly you’ll find men in business settings wearing smaller clips made of gold or silver tones. These designs can be of nothingness aside from the metal bar itself, or perhaps a unique engraving into the metal.

On the other hand we’re seeing more and more young men experimenting with styles that go outside of the traditional appearance. At times these uniquely crafted tie clip designs can a bit gaudy, but for the most part if you’re sense of fashion is on par, they’ll work fine. Remember that the purpose of wearing tie clips is ultimately to serve in keeping the tie together and secure. Not to mention tie clips themselves are a men’s accessory that never really seems to go out of fashion, so find one that suits you and hold onto it.

Understanding How To Wear a Tie or Tie Bar

With more and more men walking around with tie clips, tie bars, or even the occasional tie pin on, it’s great to see men dressing sharp coming back into style. However to put it bluntly, a lot of the guys we see simply aren’t wearing them right.

So to help keep you in the loop of fashion expertise, we’ve drafted a simple how to wear a tie clip guide. Because wearing a tie bar isn’t complicated, there certainly aren’t too many steps involved, but if you miss one step it won’t work out well. So first, let’s explain the basics of how to wear a tie clip to being with.

Grab your tie clip or tie bar, whichever you prefer to call it, and slide the two slides around both tails of the tie. At the same time clip onto the edge of your shirt’s placket, and proceed to push it together until everything is snug.

So that was the short version, however nearly every man can accomplish that part. Yet how do you wear the tie clip properly on the tie itself, and become a master of the little details which make a big impact? 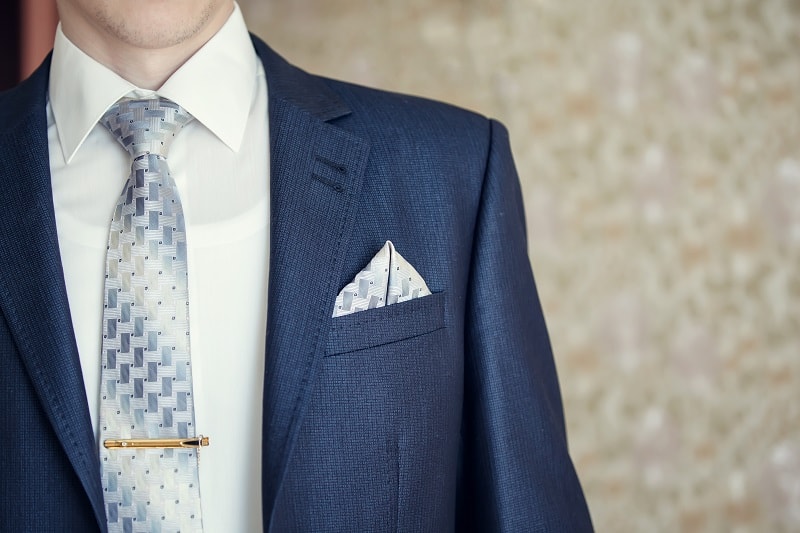 For starters, the biggest mistake men make when wearing tie clips is the position of the tie bar. The location is either too high or too low on the tie, and should be placed on the 3rd or 4th button of your shirt. In between those two buttons, you’ll find the ideal height and a few inches of room to work with. If you prefer you can also place it anywhere in the middle or center of that area.

Not to mention some men will wear non-mechanical tie clip, and they’ll notice over time it will slide down or change its angle. To prevent this for happening make sure you rest the tie bar on a shirt’s button.

Why Ever Man Should Own and Wear a Tie Bar 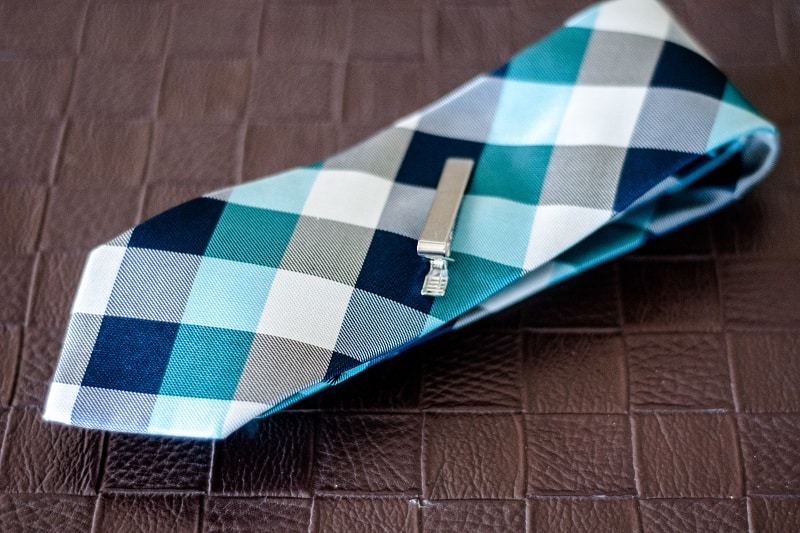 It’s a classic reminder of the evolution of style, not to mention their fashion and jewelry accessories for men that have never gone out of style. It’s quite similar to wearing a suit, if you’d like to think about it in that manner.

Men around the world, including ones close to home like your father and grandfather have worn them throughout history. Yet while most might consider it to be about the practicality and added style benefit, take a moment to think about the tradition of wearing them. Great men from all walks of life have put one on at one point or another. In the past they represented a man’s achievements such as being a member of a club or having military recognition or distinction.

Find a special reason to wear yours, and perhaps discover a design that represents who you are. And should you happen to come across a young man who does not own one yet. Do him a favor, and teach him this stylish tradition by gifting him his first tie bar. Because we can bet with full confidence he will hold onto it for years to come, as nearly every man collects them for a lifetime.