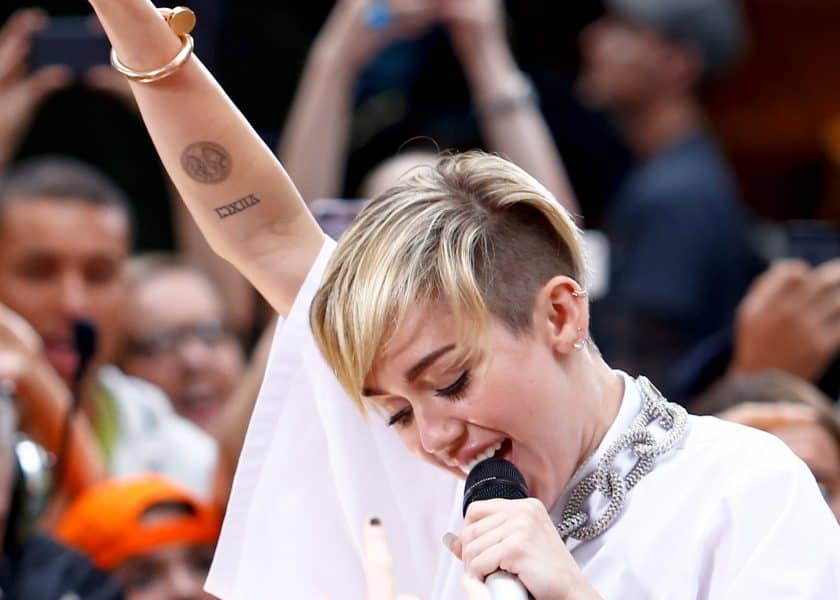 Miley Cyrus’ Tattoos and What They Mean – [2020 Celebrity Ink Guide]

Explore pop star Miley Cyrus’ most iconic tattoos and find out more about what they mean to the provocative singer, actor, performer and activist.

The world of music is full of shooting stars, shining bright and fading as fast as they appeared. Miley Cyrus no flash in the pan pop star, with acting, musical, and a raft of tabloid credits to her resume. 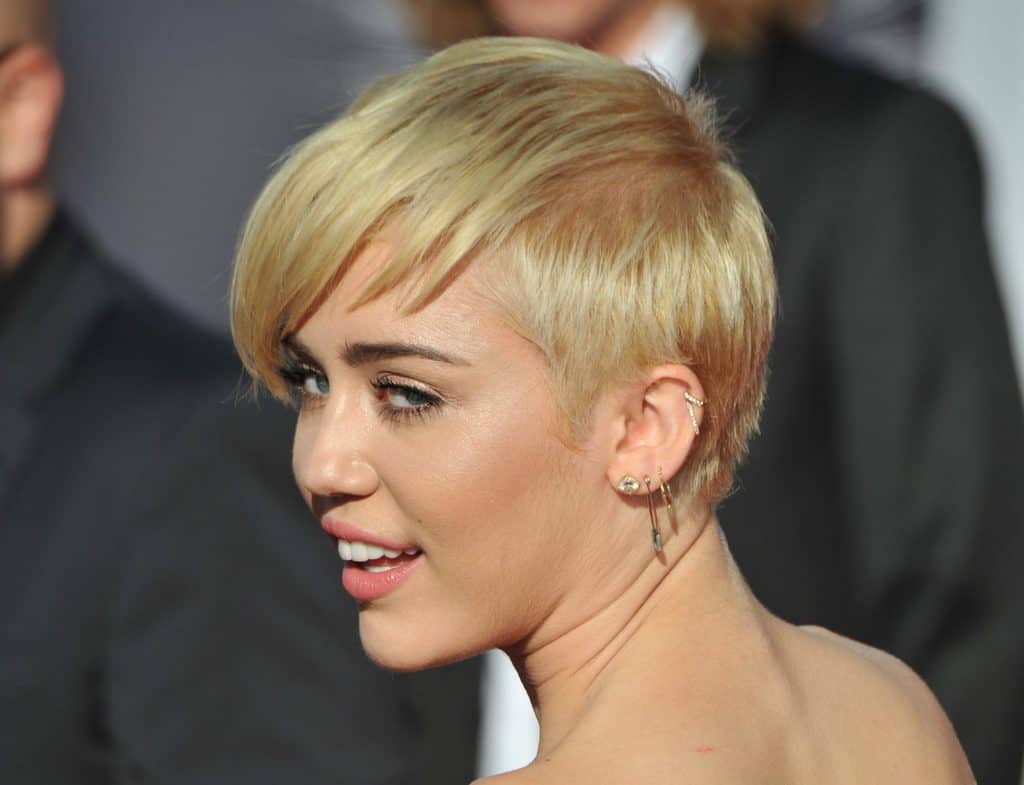 One way that she has chosen to express herself is through tattoos. With over 30 different pieces of body art, Miley is no stranger to the tattoo gun.

Daughter of country music singer Billy Ray Cyrus, Miley got her start in showbiz at a young age on the Disney Channel. Her role as Hannah Montana showcased her star potential, snagging her a group of loyal fans, and announcing to the world she was destined for bigger things.

Miley has gone on to sell out arenas around the world. As she grew, Cyrus transitioned away from her persona as a completely clean-cut childhood performer, embracing her sexuality, a sense of comic timing and shock value, and a popular but unique sense of style.

Read on to examine some of Miley Cyrus’ tattoos and the meaning behind her unique ink expressions.

Located on the rib cage on her left side, this is her first piece and she got it in 2009 when she was only 17. Miley’s tattoo is a tribute to her friend Vanessa who passed away from cystic fibrosis in 2007 and both grandfathers who died of lung cancer, as she told Harper’s Bazaar:

“It reminds me not to take things for granted. I mean breathing – that was something none of them could do, the most basic thing. And I put it near my heart, because that is where they will always be.”

Just beside her Just Breathe ink is a funny abstract piece of a nude woman cuddling a giant eyeball done with black line work. 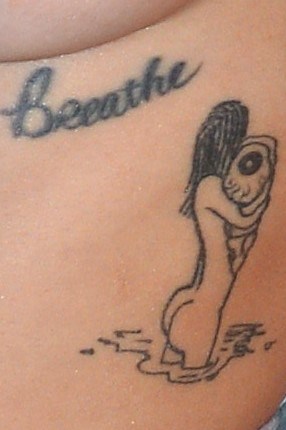 By far her largest tattoo, Miley has a dream catcher tattooed on the ribs of her left side. According to a friend, the tattoo is dedicated to her family: “It’s a picture of the dream catcher that hangs over her bed with four feathers to represent her four brothers and sisters. The dream catcher is to protect them.” 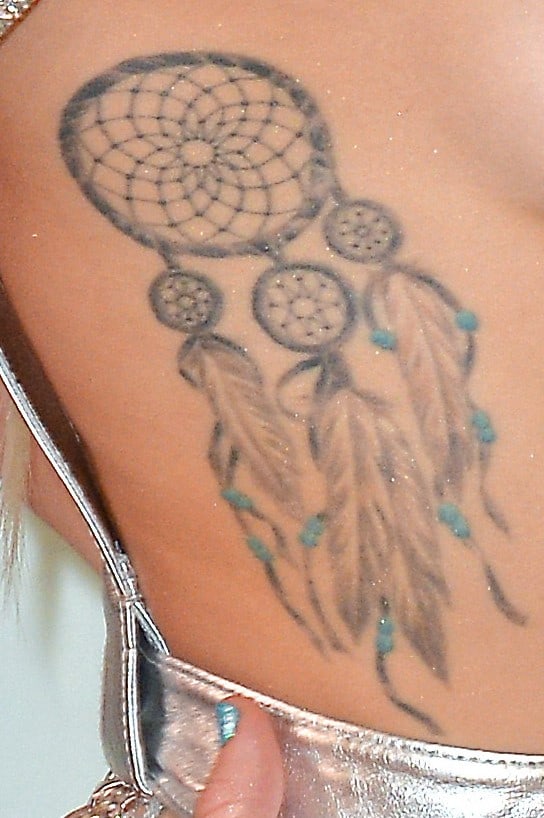 One of her more intriguing pieces – one of many that she shares with former husband Liam Hemsworth -Miley has a quote tattoo from one of the 26th president’s famous speeches.

Applied in a smooth cursive script the piece reads:

“So that his place shall never be with those cold and timid souls who neither know victory nor defeat.”

This quote is delivered in a speech about the necessity for people to constantly push themselves and how it is better to have tried and failed than to have sat back and watched from a distance. This is a quote that reminds Miley to live her best life every day, and to get back up when she falls. 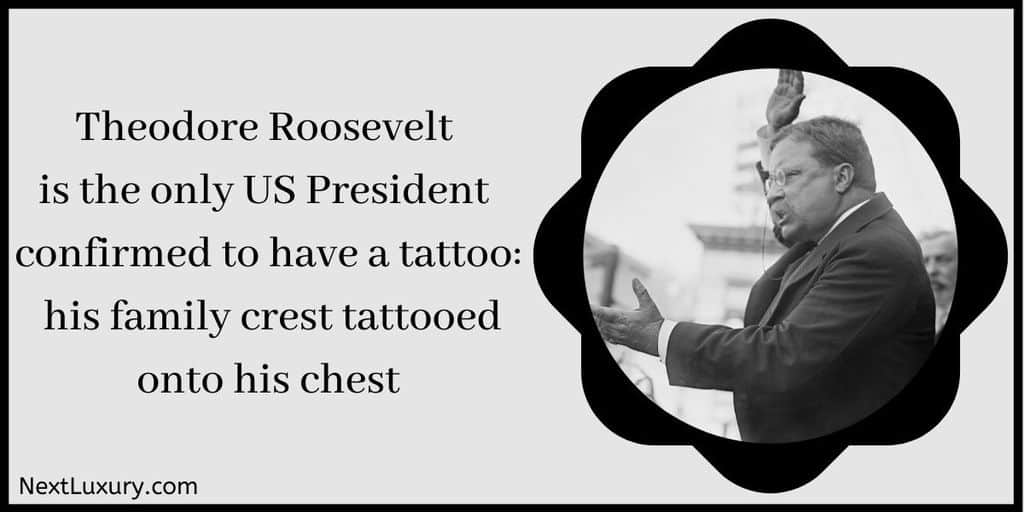 Another comparatively new tattoo Miley received was a tribute to Henri Matisse. The tat is one of a few on her upper arm, featuring sublime line work in honor of the master painter.

In unveiling the tattoo in Instagram, Cyrus quoted the following lyrics from the songwriting great Leonard Cohen:

Located on her right forearm, Miley has a photo-realistic, black and gray portrait of her grandmother, Loretta Finley. Her fifth tattoo from high profile tattoo artist Kat Von D, Miley posted a picture of the new ink with the caption: “Because I am her favorite, and she is mine”. 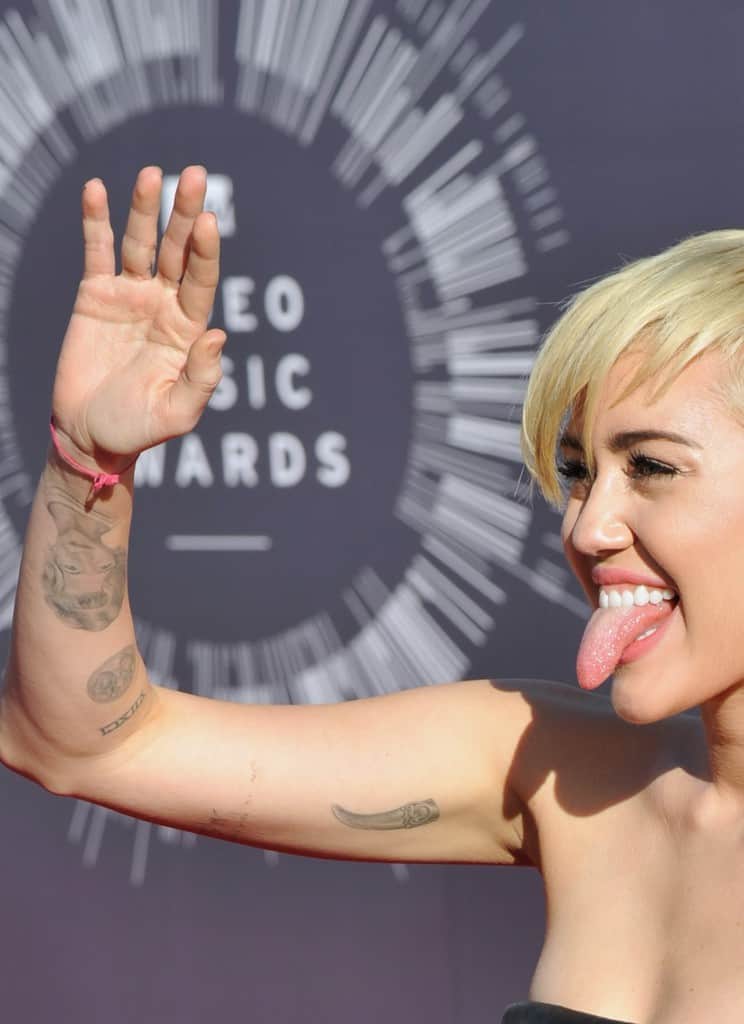 Miley got a handwritten note from Yoko Ono tattooed on her left shoulder by tattoo artist Daniel Winter late in 2019.

Winter was also responsible for the ‘Freedom’ ink Miley got etched across her knuckles in beautifully flowing cursive on her right hand, showing off the LA Artist’s deft work with a tattoo gun.

With a Little Help From My Fwends

Miley also has a tattoo tribute for dog Floyd on her left rib cage. Around the little dog portrait reads: with a little help from my fwends, the title of the 2014 Flaming Lips album paying tribute to the Beatles Sgt Pepper album. Cyrus sang a version of Lucy in the Sky with Diamonds. 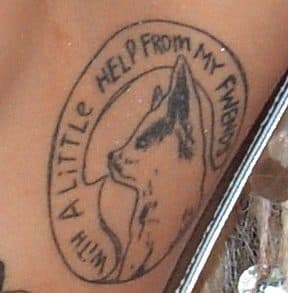 In addition to the Roosevelt quote the mother’s daughter singer has many tattoos on her left arm done entirely in fine line black ink. Miley’s left arm tat collection includes:

With over a dozen small tattoos on her hands and fingers Miley isn’t scared to let her ink be seen by the world.

Miley got this piece 2010 and it is her second tattoo and the first on her hand. This is a family tattoo that she shares with her dad, Billy Ray, mother Tish, sister Brandi and brother Trace, all of which are placed somewhere on the hand.

Placed on the inside of the ring finger on her right hand, Miley has a simple cross tattoo. She is a Christian and this is a symbol of the role faith plays in her life.

Located on the inside of the middle finger on her right hand is a peace symbol, though she has never spoken about the significance of this piece.

On her right wrist, Miley has an anchor that she got on tour Brazil in 2011 from artist Fabio Satori. She has said that the anchor represents having a safe port and keeping her feet on the ground.

In 2011 Miley got the word “Karma” tattooed on the side of her index finger. She has expressed interest in Eastern religions and the concept of karma is at the heart of many of these traditions.

Her most controversial piece, Miley has an equal sign on the side of her ring finger. Despite blowback from conservative fans, Miley stood by her statement in favor of gay marriage and the idea that “All LOVE is equal.”

Another nod to her interest in Eastern traditions, Miley got the sacred Hindu symbol om tattooed on her left wrist in 2011.  There are now several tattoos here, and space is rapidly filling up!

On the middle phalanx of her right index finger Miley has a Nazar, a Middle Eastern symbol that is said to ward off the “evil eye”, expanding her collection of tattoos from different cultural traditions.

In July 2012 Miley was seen with the word “Bad” written in the script from Michael Jackson’s record on the inside of her right middle finger. She has expressed her admiration for the King of Pop. 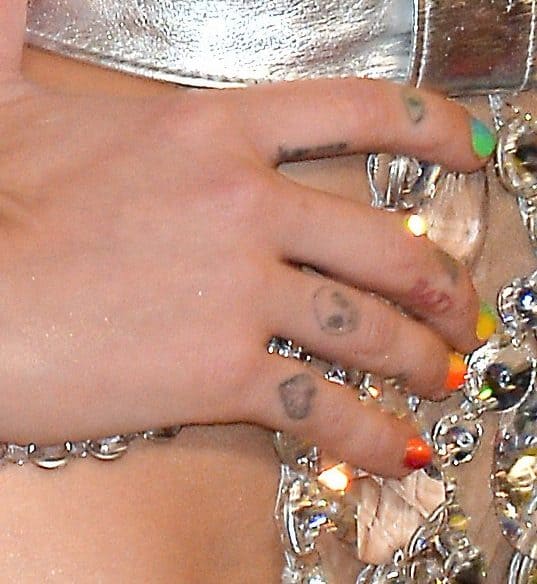 On her right middle finger Miley got a tongue tattooed, and while some of the ink has since fallen out, sticking out her tongue has become a trademark expression of Miley’s.

To cover up her faded tongue tattoo, Miley got a small triangle on her middle finger that matches a piece that her friend Cheyne Thomas got on his foot.

Her nickname for her younger brother Braison, Miley got this tattoo on her wrist, another of her many tattoos referencing family.

On her right ring finger, Miley has an alien’s face; she hasn’t spoken publicly about the meaning behind this piece.

This is another iteration of the piece that started as a tongue, changed into a triangle and finally become this cute, color watermelon.

A String of Ancient Symbols

A string of ancient symbols found on rock walls was etched in by high profile artist Dr. Woo on Miley’s right wrist. It’s a small and delicate piece done with sweet attention to detail.

Miley’s Most recent tattoo session saw her get a matching trident tattoo with latest boyfriend Cody Simpson. They were inked by artist Nico Bassill, who has worked previously on the Wrecking Ball singer, and the Australian pop star. The trident tattoo symbolizes Simpson’s move into poetry under the name Prince Neptune.

Sporting a variety of different styles and designs, Miley Cyrus tattoos are interesting and exceptional. Body art has become a large part of her life and a fantastic means of self-expression. With no sign of slowing down, we’ll have to wait and see what her new ink will be.

Sporting a variety of different styles and designs, Miley’s ink has become a large part of her life and a fantastic means of self-expression. With no sign of slowing down, we’ll have to wait and see what her next piece will be.