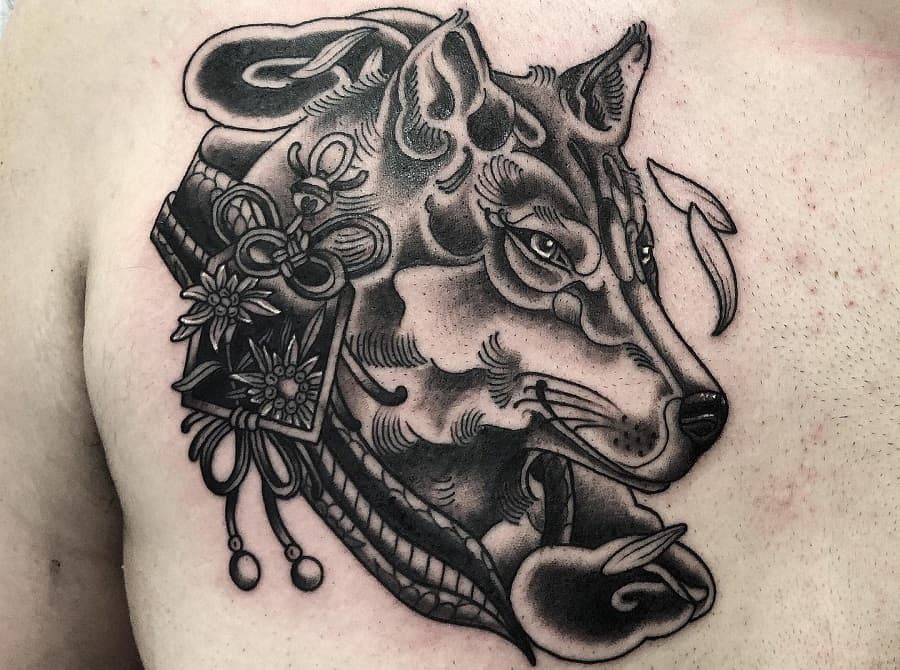 Okami is the Japanese word for wolf. In this gallery Okami tattoo refers to body art referencing the popular and unique video game Okami.

The pivotal main character is the goddess Amaterasu, whose spirit manifests as a white wolf like Shiranui from Japanese folklore.

Okami video game tattoos are popular due to the cool visual style paying tribute to the ink wash painting known as sumi-e, and for the game’s references to different kinds of Japanese myth.

Read on for 57 Okami Tattoo Ideas inspired by the video game that will have you looking for a new tattoo, while toward the end you’ll find a few FAQs to help narrow down your choices!

What does an Okami tattoo symbolize?

Okami is the Japanese word for wolf. In this example an Okami tattoo refers to ink referencing the popular Nintendo Video Game Okami, whose pivotal main character is a wolf.

Okami video game tattoos are popular due to the cool visual style paying tribute to the ink wash style painting known as sumi-e, and for the game’s references to different kinds of Japanese folklore.

What does an Amaterasu Tattoo mean?

The heroine of Okami, Amaterasu is the Japanese sun goddess who inhabits the form of a legendary white wolf (Shiranui).  Amaterasu is “the Okami” tasked with restoring the vivid land of Nippon against the protagonist Yami.

Amaterasu is by far the biggest tattoo influence for Okami related ink. She’s portrayed in all manner of tattoo styles, often with red markings reflecting the celestial powers she possesses during the game.

What is the Celestial Brush in Okami tattoo designs?

Okami uses the ‘Celestial Brush,’ a unique method of painting inspired gameplay brought to life via the controller. Through the Celestial Brush players can fight, fix things, carry out tasks and perform miracles needed to progress through the game.

Some Okami tattoo designs are etched to reflect drawings created through using the Celestial Brush when playing the game.

Can sumi-e painting be used to create Okami tattoos?

Yes. If you work with a tattoo artist skilled at using woodblock, watercolor, or even Japanese calligraphy techniques in their designs then you can get work applied in this visually impressive ink wash painting style.

These designs for art enthusiasts need not be constricted to black ink, which is the central feature of sumi-e style. Many Okami tattoo ideas are deployed in a mixture of vivid colors to reflect lush visual images from the video game or are supported by other traditional Japanese Irezumi tattoo elements.

What are some other tattoo ideas from Okami?

Outside of Amaterasu, there are a few other popular concepts used in bringing Okami tattoos to life that are part of Japanese traditional folklore. These include:

Did you enjoy these awesome Okami tattoo ideas? If you’re looking for more mythology and Japanese inspired tattoo art click on the links below to explore: