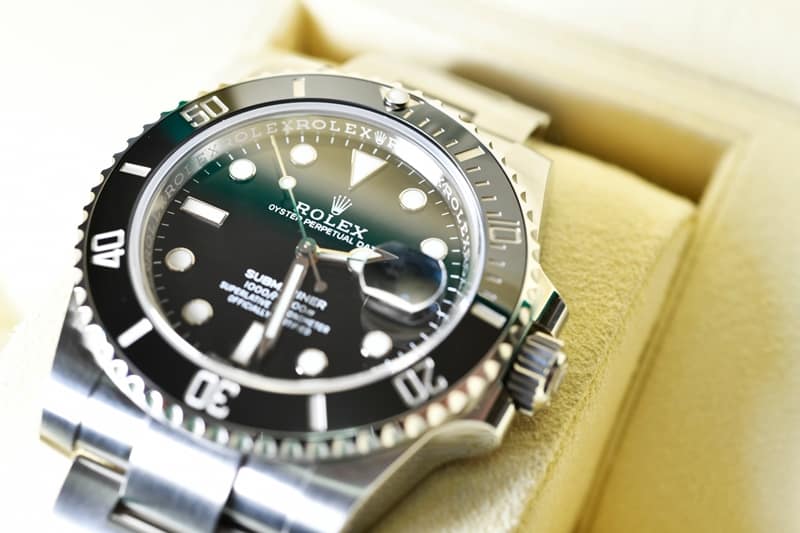 The History of the Rolex Submariner

The Rolex Submariner is much more than just a diving watch. It’s a timepiece with a fascinating history that has been shaped by the various developments designed to take its functionality to the next level.

The Submariner has become a symbol for unmatched water resistance and durability under any conditions. Its beautiful design has also made it one of the most iconic watches ever made.

Here is how the Rolex Submariner has become one of the best and most sought-after watches in the world. 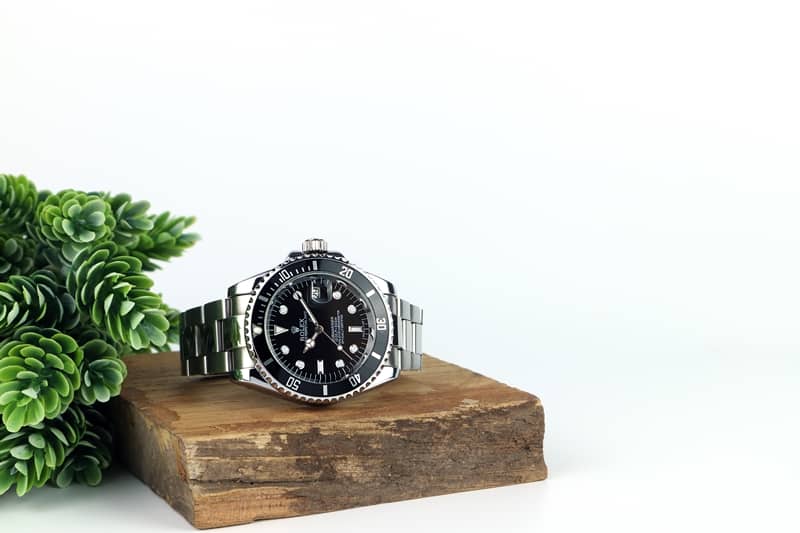 Rolex was offering water-resistant watches way before the introduction of the Submariner. In fact, by 1935, the company released several timepieces that were safe to use in the water, including the ones with the earliest version of the Oyster case.

These watches had a pocket watch movement inside them, which made their cases rather large in diameter, and because of this, there wasn’t much interest in them. Fortunately, their specific cushion shape managed to grab the attention of Panerai, an Italian watch and diving equipment dealer.

After forming a partnership with Rolex, Panerai released the Radiomir models, which had the cushion-shaped Oyster case, along with a Cortébert caliber movement. The latter was supplied by the Geneva Corporation, which also provided some helpful feedback.

This input convinced the owners of Rolex to develop a timepiece with professional diver needs in mind. In the early 1950s, the company began experimenting with divers watches, albeit these watches didn’t have the name Submariner yet. 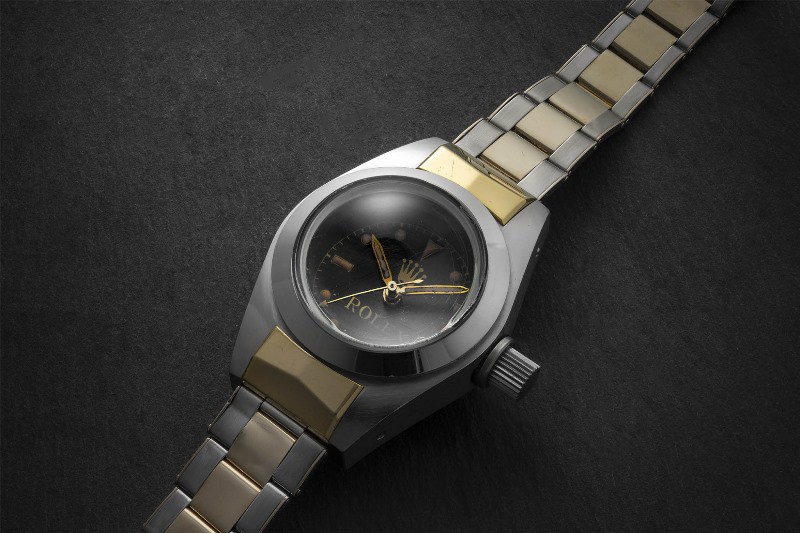 In 1953, Rolex announced their first watch designed for divers. This was done by getting Auguste Piccard to dive several thousand meters in the ocean with his deep-diving submarine and a Wilsdorf’s Rolex watch attached to the vessel.

This timepiece had a luminous dial, which made it even easier to see that when the diver rose from the water, the watch was still working. A decade later, another Rolex was taken to the depths of the ocean with another submarine.

This time a special prototype was carried by Jacques Piccard, the son of Auguste Piccard. This timepiece had an Oyster case designed to withstand extremely high pressure. Attached to the outside of a pressure sphere, the watch has reached the deepest point in the ocean. The prototype has survived this ordeal and continued to run in perfect order. 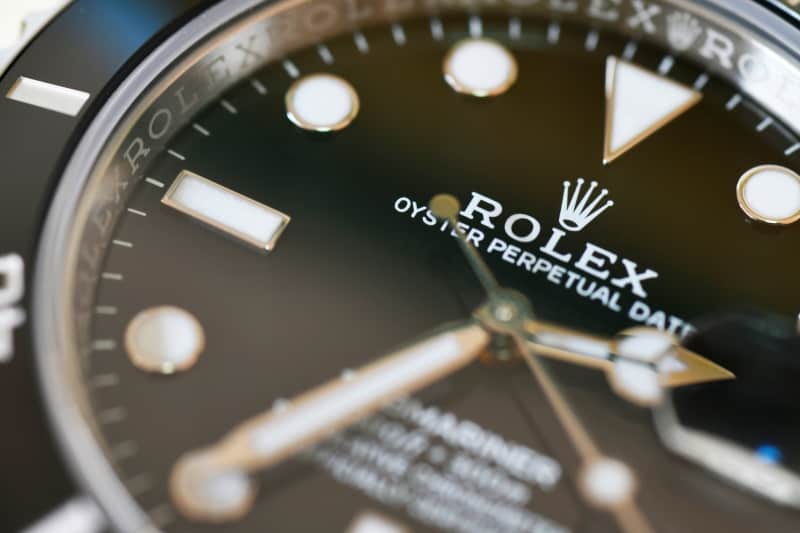 The very first models featured the now-familiar Oyster case, the self-winding movement, and a screw-down crown. This was made possible by the notorious René-Paul Jeanneret, a passionate diver and a member of the Rolex board of directors. He developed an idea of manufacturing a functional diver’s watch that can also double as an elegant timepiece.

He took it to Rolex founder and president Hans Wilsdorf. Wilsdorf saw the opportunity in marketing and selling these types of accessories and decided to approve its development.

By the 1950s, most Rolex models were water-resistant and even had a slimmed-down, elegant design. However, René-Paul Jeanneret wanted to take their functionality onto another level, encouraging company engineers to discuss the possibilities.

Apart from the case being able to withstand pressure, they wanted to create watches suitable for any type of activity, in and out of water. This resulted in the development of the first Submariner and several other collections afterward, including Explorer, Turn-O-Graph, GMT-Master, and Milgauss.

The first Rolex Submariner was launched in 1954 at the annual Basel Watch Fair. This model was water-resistant and could withstand pressure at 1,000 feet or 300 meters. 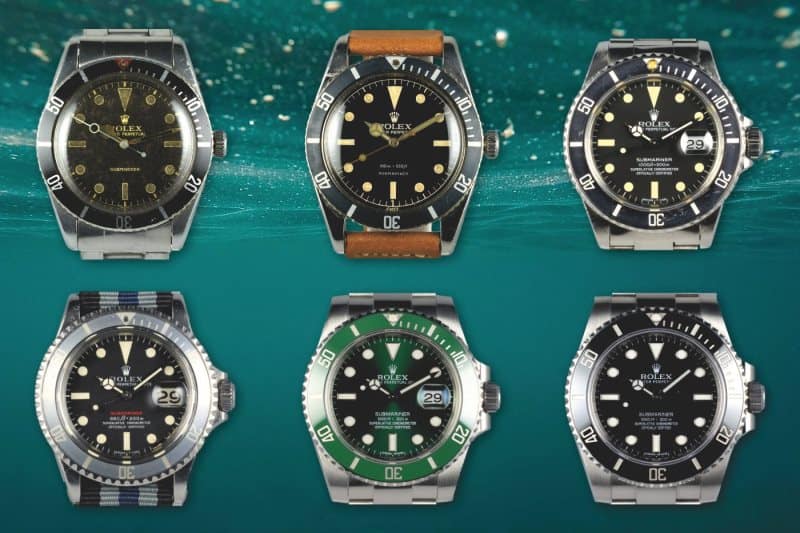 The first public testing brought the company the attention they were looking for. To further entice customers to buy its products, Rolex released two more models right after the first one in 1954. Suddenly, the customers could choose between three functional and elegant timepieces, which helped Rolex elevate its brand to the next level.

None of the models had crown guards. Interestingly, the early pieces of these models didn’t have the Submariner name written on them either, as Rolex only started to use this name on the dials at the end of 1954.

See more about - The History Of The Casio G-Shock

The Rise to Popularity and Further Development 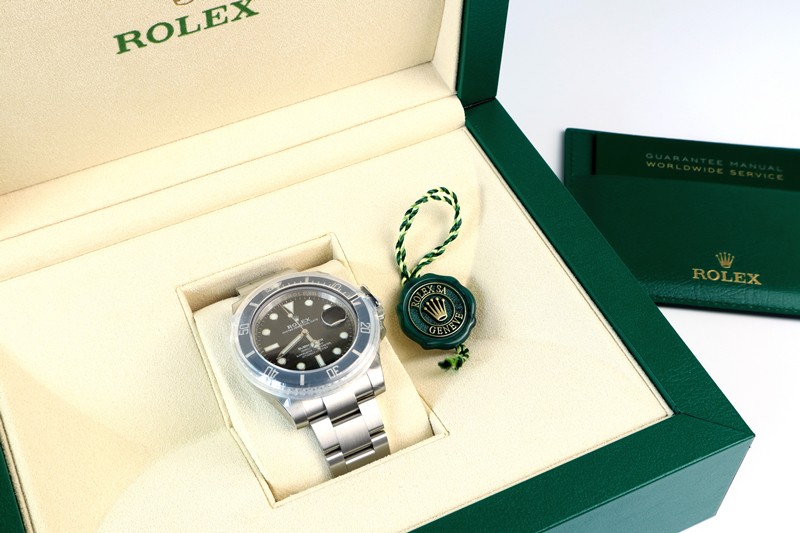 Even the first successful tests created a lot of attention for the Rolex Submariner. That being said, the first diving attempts also showed that while the watch still worked after being submerged in the water, condensation appeared on the inside of the case, indicating water penetration.

Jeanneret found it necessary to ask for the feedback of experts on designing a better case. Using these, Jeanneret developed a new type of dial and rotating bezel for underwater reading.

In 1954, Rolex watches had a matte black dial, a rotating bezel with markers five minutes apart, and luminescent indexes and hands. Also, the zero position was marked with an arrow that had a radiant pearl in its center. With an automatic movement and a water resistance of 100 meters, Rolex achieved its goal to create a professional divers watch.

Despite this, there still was a demand for more durable watches that could be used for different sports and as a daily accessory. After more rigorous testing in the water, the Submariner 5513 hit the market in 1967.

Its water resistance was verified by The Institute for Deep-Sea Research in Cannes, where the watch underwent over a hundred dives in different depths of water. Not only were no leaks detected inside of the mechanism, but it withstood the corrosive effects of the salty water of the Mediterranean at tropical temperatures. 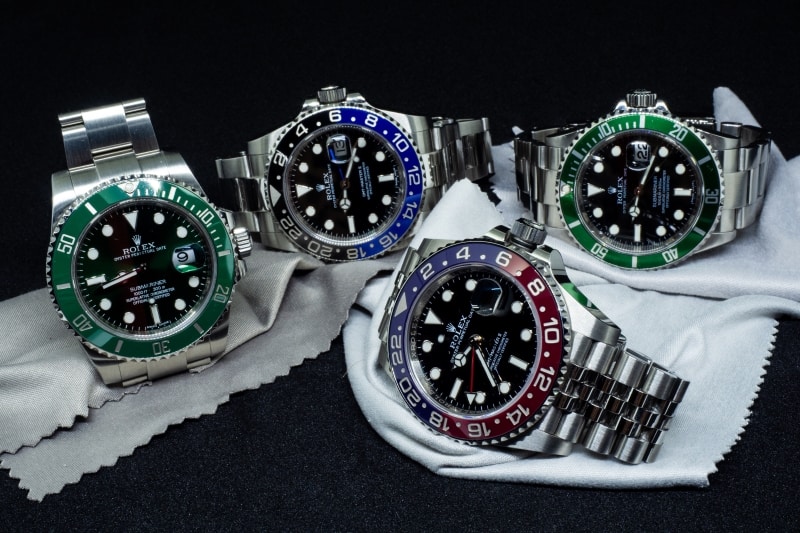 ‍The 6200, the Submariners that followed the first two models were already equipped with the Mercedes handset, which is still present on the modern Rolex. They also had a winding crown, although it was rather large compared to the case itself. Later on, with the 6204 and 6205 models, the winding crowns became smaller. The movement of the watches had also improved. Further down the line, a chronometer was incorporated in the Submariners, much to the delight of customers.

To keep up the variety, Rolex continued to make models with oversized winding crowns. These Submariners came with and without a chronometer. For example, the 5512 was equipped with this device, while the 5513 wasn’t. Both models had an added protection for the winding crown in the form of a rounded design on each side.

Until 1966, Rolex used silver-gilt dials on the Submariners. Around this time, the designers decided to switch to white paint on the dials. In addition, this period marked the appearance of a date window on model 1680. With this move, Rolex managed to conquer yet another market. With a new design, the Submariner was no longer a functional timepiece used by a specific group of people but gained a much wider mass appeal.

10 years after launching the first Submariner with a date window, Rolex introduced its watches with five-digit reference numbers. The first of these was the 16800, followed by the models 16803 and 16808. These Submariners were again transitional models as they featured parts of the previous models but were doing so in an improved version. ‍

One of the major design changes the Submariner went through was switching the plexiglass crystal with a sapphire one. This made the watch ever more resistant to scratches and pressure. The magnifying glass effect was kept due to its being a diverse favorite because it allows easier reading.

The second change came in the version of the Triplock crown, which is used Rolex’s own patented technology. This feature was already popular on the Sea-Dweller collection but the vast market of the Submariner made it an even better option for these watches.

Soon after, Rolex took its Submariner to yet another level by launching the models 16808 and 16800, featuring soling gold elements. Both model models came in 18 karats of yellow gold and were available with a black dial and bezel or a blue dial and bezel.

Later, the 16803 featured gold in a different way. This model had 18-karat gold central links and a rotating bezel, while its frame was made of stainless steel, representing a stunning combination of outdoor styling and elegance. 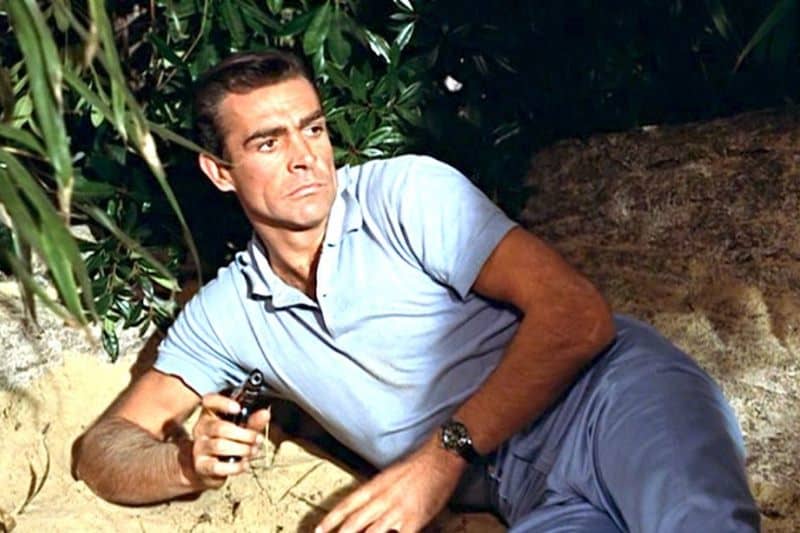 The first two Submariners launched under the reference numbers 6204 and 6205 are still recognized as two of the greatest dive watches in the world. They can be found in rare watch collections. Even though they don’t have the hands we are now familiar with, they are two of the most sought-after timepieces that have ever existed.

What contributed to the now notorious mass appeal of the Submariner was mostly its appearance in the media. Sean Connery wore a Rolex Submariner 6538 while playing James Bond in the first four installments of the movie series.

George Lazenby also wore a Submariner when appearing as Bond, this time it was the 5513. Continuing with the tradition, the same model of Rolex was used by Roger Moore in two of his Bond appearances. The last appearance of the Submariner was attributed to Timothy Dalton. He was seen sporting the 16800 in License to Kill in 1988. 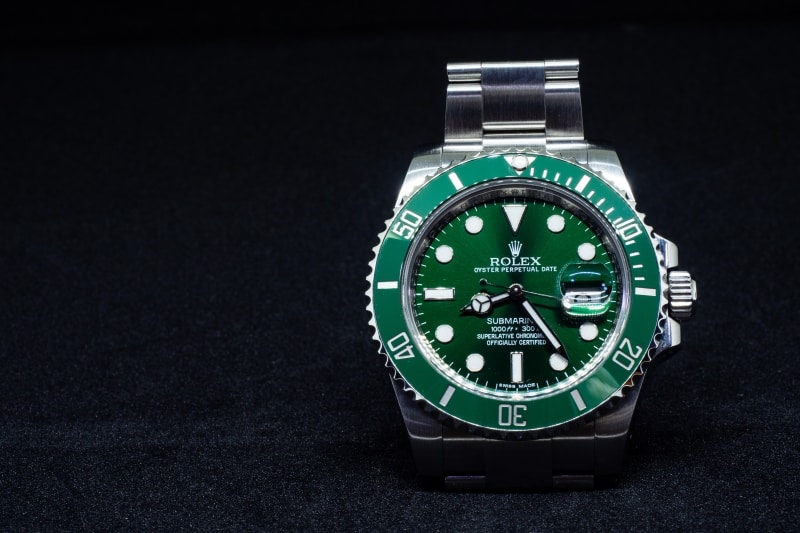 Over the last two decades, the Rolex Submariner was improved both in functionality and design. Its case now has even better water resistance properties, and the movements are updated to modern solutions. The contemporary minute changes satisfy every watch lover’s needs.

To celebrate its 50 years of existence, in 2003, Rolex introduced a limited edition Rolex Submariner-Date model, the 16610 LV. This timepiece was produced until 2010 and featured a large dial, and was equipped with a bright green colored bezel.

While shifting the attention into a more mainstream direction, Rolex still managed to keep up with the demand for endurance as well. In the mid-2010s, the company launched the Rolex Submariner 116610 LV, which sported a new design. Its frame was made of stainless steel, while the bezel was colored green.

This was an updated version of the 2003 model, and due to its coloring and massive design, it has since become known as Rolex Hulk. Like its elegant counterpart, this model has also very quickly become one of the most sought-after Submariners in its own category.

These days, the Rolex Submariner has many different collections to choose from. Whether someone is looking for a stylish timepiece to wear in day-to-day life or a durable watch for outdoor activities, they will be able to find it.

Ever since its introduction over 60 years ago, the Rolex Submariner model has been steadily evolving. During its various stages of development, Rolex has used the input of many experts while also keeping up with customers’ feedback.

As a result, now we have a modern watch with a solid case and bracelet, an easily adjustable clasp, a ceramic bezel, and a design with features similar to that of the early models. It’s a watch that can withstand the toughest circumstances while being a classic timepiece at the same time.

See more about - How To Buy Your First Vintage Rolex