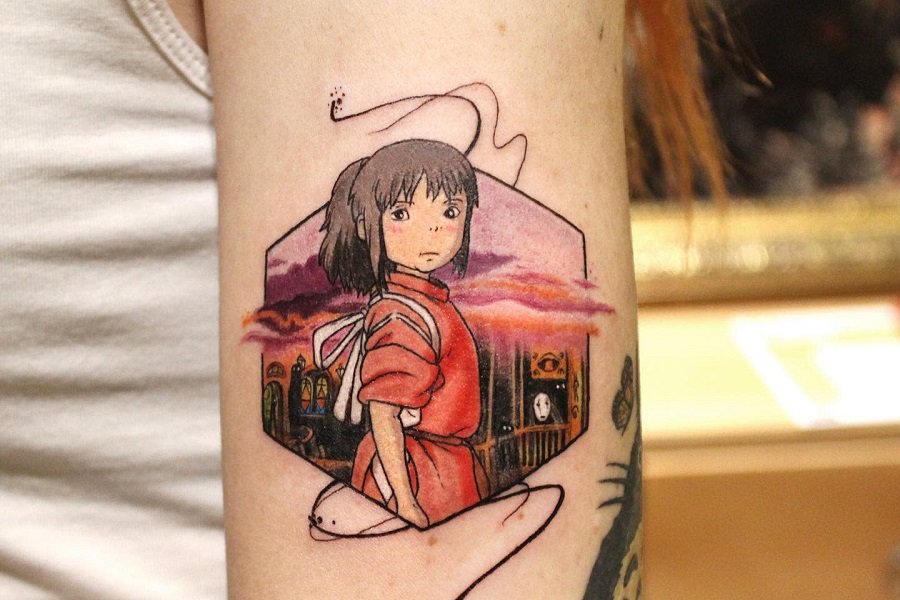 No Japanese animation has captured the hearts of Western audiences quite like the Studio Ghibli film Spirited Away. Many fans around the world have commemorated their love of the film with Spirited Away tattoos.

Telling the fantastic story of a young girl named Chihiro and her trip into a magical land of spirits, ghosts and witches, Spirited Away has earned critical acclaim as well as a devoted cult following.

Full of strange, grotesque and beautiful scenes, Spirited Away was heavily influenced by Japanese Shinto folklore and is the perfect inspiration for unique and fascinating Spirited Away tattoos as well as a thriving cosplay scene. The tattoos in this gallery are just a brief example of the exciting work that draws inspiration from this dramatic and fanciful Japanese anime film.

Some concepts are better suited to realism and more straight forward interpretations. Spirited Away is not one of them. The abstract and surreal approach that these tattoo artists have taken is perfectly suited for the magical themes in this unique anime film. This is especially true for the bizarre spirit No Face that ingests other characters and takes on their personalities and physical traits.

Spirited Away is a visually stunning film, full of fanciful scenes and bizarre characters. It is for this reason that so many fans of the film have chosen to get tattoos that use color ink to more accurately recreate their favorite characters and scenes.

Utilizing a variety styles and approaches, all of these Spirited Away tattoos demonstrate how well color can be applied to anime themed designs.

There is a reason why black and gray tattoo work remains one of the most popular styles: it looks good. Each tattoo artist takes full advantage of the subdued elegance of black and gray work to create these stunning Studio Ghibli tattoos that use the bizarre characters of Spirited Away as their subjects.

While some people prefer the bold lines of American traditional work, these Spirited Away tattoos demonstrate the appeal of a more delicate approach. Utilizing both color and black and gray palettes for drawing, these excellent tattoos re-create the characters and scenes that fans and art enthusiasts around the world have grown to love.

Powerful symbols of strength and wisdom, dragons have been popular tattoo subjects for decades. In Spirited Away the character Haku can transform into a white dragon, providing the perfect inspiration for these custom Haku tattoos. These Chinese dragon tattoos also perfectly demonstrate the acculturation that has occurred between Japan and China for centuries.

The cast of characters that act out this wild story have become important to fans of Spirited Away, and many people have chosen to get their favorite characters tattooed in a variety of styles. Chihiro/Sen, No Face and Haku are all represented in these excellent Studio Ghibli tattoos.

One of the most important roles for a tattoo artist is to constantly push the limits of what is possible in their medium. Thankfully for these artists, the bizarre character No Face and his shape shifting qualities, provide the perfect opportunity to explore the limits of tattooing, both in idea and in technical application. Generally speaking, if you’re inking No Face, you won’t get cute pop culture tattoos

Many Spirited Away fans have a special connection with the idea of this strange anime character. Gaining the qualities of the spirits and people he devours, No Face perfectly captures the bizarre and magical nature of the story and his stoic, masked visage makes for some interesting—and a little bit creepy—Spirited Away tattoos.

The world of Spirited Away is populated by an endless cast of spirits, ghosts and sprites that are inspired by Japanese Shinto folklore. Some of the cutest of these spirits are the soot sprite, or susuwatari, who Chihiro/Sen befriends while working in Kamaji’s boiler room. These charming characters are perfectly recreated in these unique Spirited Away anime tattoo.

It isn’t surprising that so many art enthusiasts and anime fans have chosen to get Studio Ghibli tattoos applied in vibrant colors, demonstrating a high level of technical detail. The unique style that this animation studio is known for is perfectly suited to the fantastic scenes and bizarre characters that inhabit Miyazaki’s spirit world. These excellent tattoos demonstrate what is possible when a talented artist has such a vibrant and exciting film as inspiration.

What does Spirited Away symbolize?

Written by Hayao Miyakazi and released in 2001, Spirited Away ‘s plot follows the main character Chihiro’s journey through the land of spirits where she loses her name to a witch, interacts with a number of spirits and must transform from the person she was into the person she must become.

A variety of themes play into this powerful allegory with a central theme being the coming of age of Chihiro. When the bathhouse witch Yubaba steals Chihiro’s name and re-christens her Sen, an important symbolism to represent Chihiro’s growth and how she must return to her world despite having left her former personality in the past.

Another important theme Spirited Away ‘s plot is a commentary on the profound cultural shift that took place in post-war Japan. Early in the film Chihiro’s parents eat food that changes them into pigs, which writer and director Miyakazi used as a metaphor for portions of Japanese society that “turned into pigs” during the economic boom in 1980’s Japan.

The stunning visuals and complex significance of the film ensures that critics and art enthusiasts will continue to appreciate this one of a kind movie for years to come.

Hayao Miyakazi is a Japanese writer and director that earned a prominent place in the world of anime and storytelling thanks to his unique style and the profound messages contained in his films. Co-founder of the iconic animation company, Studio Ghibli, Miyakazi’s other films include Princess Mononoke, My Neighbor Totoro and Howl’s Moving Castle.

While Miyakazi’s first film was released back in 1986, it was first Howl then Spirited Away that captured the attention of international audiences. He continues to create the one of a kind stories that—with the help of Studio Ghibli Films’ talented animation team—make him a premier name in anime.

Were you a fan of these Spirited Away tattoo designs, but looking for more anime inspiration? Click on the links below for more galleries: