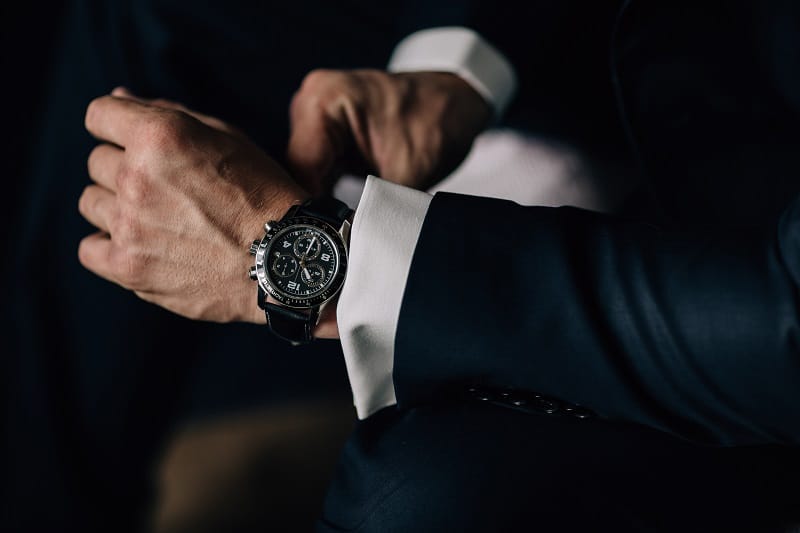 The Best James Bond Watches of All Time

Bond, James Bond, wouldn’t be so damn cool without his array of luxury staples. From his trusty, shaken, not stirred martinis to his revolving garage of Aston Martins and BMWs, it’s safe to say 007 truly enjoys the finer things in life. However, we don’t believe Bond would be nearly as cool without his incredible watch collection.

Traveling from here to there to save the world is a time-consuming business, and as such, requires the finest horology has to offer. Whether merely eye candy for the audience, or at times, state-of-the-art spy gadgets, here are some of the best watches James Bond has worn across more than fifty years of cinema. 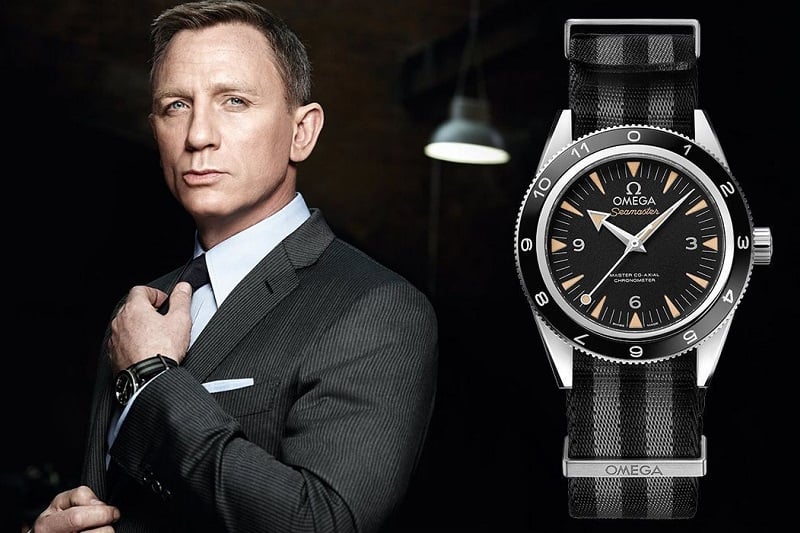 Usually, a throw-away line for most, but when it comes to James Bond, women want to be with him, and men most certainly want to be him. So why not settle for one of his most prized possessions. Starting with our most recent addition to the James Bond timepiece gallery, the Omega Seamaster 300 Master Co-Axial 41mm is the very first Bond watch to be made available to the public.

Usually restricted to one-off designs made explicitly for the film they were intended for, the Omega Seamaster underlines just how influential the James Bond character has become.

Presented in a stainless steel case, the Omega Seamaster 300 Master Co-Axial 41mm boasts a black ceramic bi-directional bezel ring and 12-hour scale in Liquidmetal. Coupled with rhodium-plated hands and their vintage (blue emission) coating of Super-Luminova, this is one incredible looking timepiece. Complete with a 007 engraving on the bracelet’s strap holder and the James Bond NATO Strap, Omega Seamaster 300 Master Co-Axial 41mm is a true testament to the gadgetry wielded by James Bond.

2. Rolex Submariner (Goldfinger, Dr. No, From Russia with Love, Thunderball) 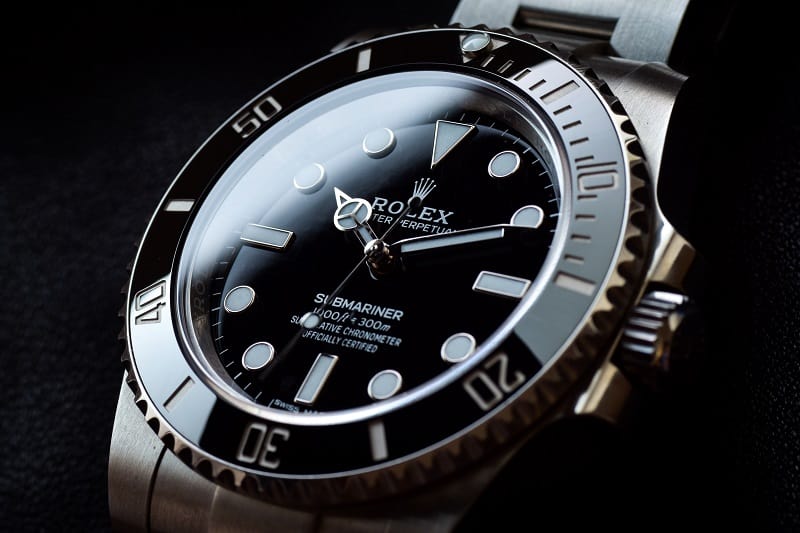 Dubbed the  “James Bond Submariner,” the Rolex Submariner (ref. 6538) first graced the big screen on Sean Connery’s wrist in the 1962 film, Dr. No. His first outing as James Bond. Boasting a brand Caliber 1030 movement, a slightly thinner case, more beveled lugs, and a larger 8mm winding crown, it was initially named the “Big Crown” Submariner due to its oversized crown.

As a highly sought-after timepiece that made appearances in From Russia with Love, Goldfinger, and Thunderball, each one featured several different strap combinations and gadgetry to help Bond achieve his mission.

The “James Bond Submariner” from Rolex features a brown or black gloss dial with a luminous dot, baton, and dagger markers as well as luminous Mercedes hands and sweep center seconds. Complete with a revolving black bezel calibrated for 60 units, it’s a fully functional movie prop that has collectors spending upwards of $550K at auction. 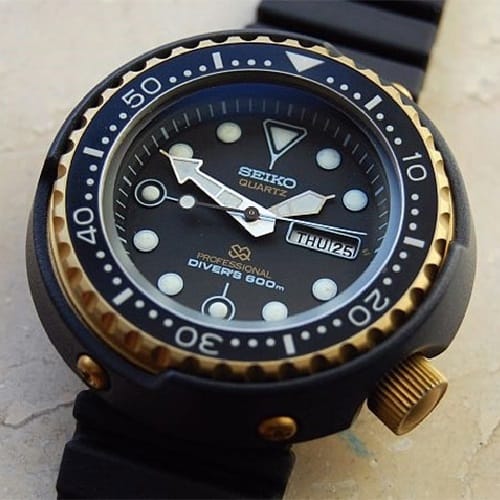 Worn by Roger Moore for the 1981 Bond film, For Your Eyes Only, the Seiko 7549-7009 “Golden Tuna” 600m Professional Quartz Diver is one of Seko’s most famous watch designs. Maintaining a classic stature amongst several other timepieces, the Golden Tuna, though hardly seen during the movie thanks to lack of close-up shot, is a true classic amongst collectors.

Luckily, we were finally given a close up look of ‘Golden Tuna’ when the watch was worn again by Roger Moore during the 1980 movie North Sea Hijack. 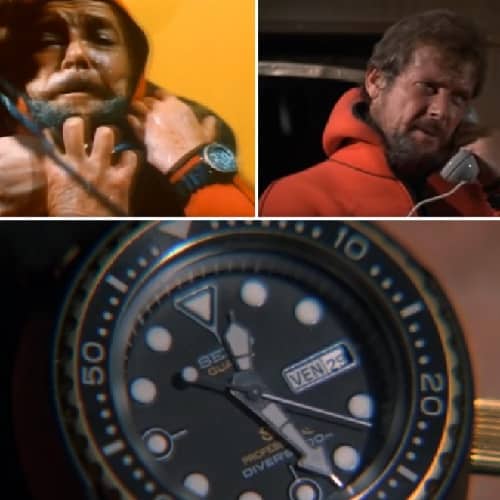 As the first-ever diver’s watch with a Quartz movement and the first with a Titanium Case, the Golden Tuna is famous for more than just being a Bond watch. Nicknamed as such due to its resemblance to a can of tuna, the Seiko 7549-7009 Golden Tuna worn by Bond was released in 1978. Boasting a golden inner case, golden crown, screws, and caseback.

The titanium inner case was coated with Titanium nitride, which is an extremely hard ceramic material with a golden appearance. 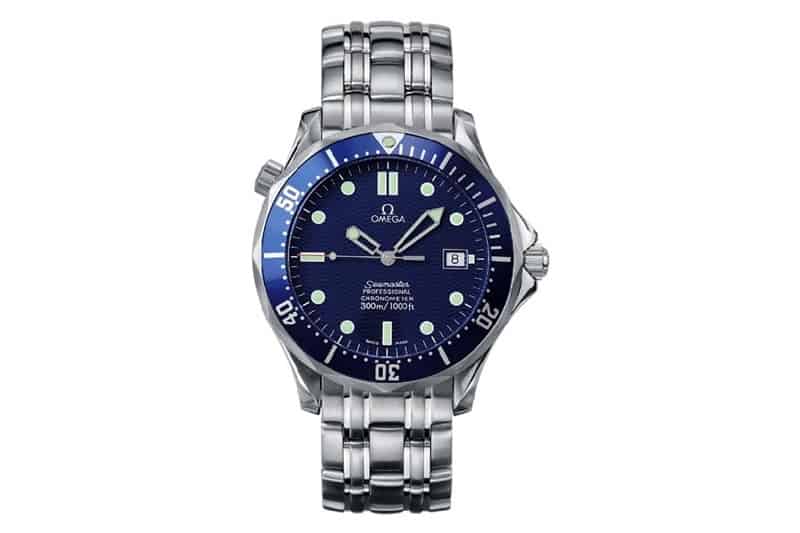 Wearing the stainless steel full-size Seamaster Professional with its blue face, and blue bezel on a stainless steel bracelet in pretty much every single Bond movie he was in, the Omega Seamaster Professional is without a doubt the quintessential Pierce Brosnan James Bond timepiece. Packed full of useful gadgets and features, during Tomorrow Never Dies, Bond uses the watch to detonate a small charge and activate a hand grenade.

While in The World Is Not Enough, Bond activates the included grappling hook to lift himself up. In Die Another Day, it’s employed again as a detonation device. 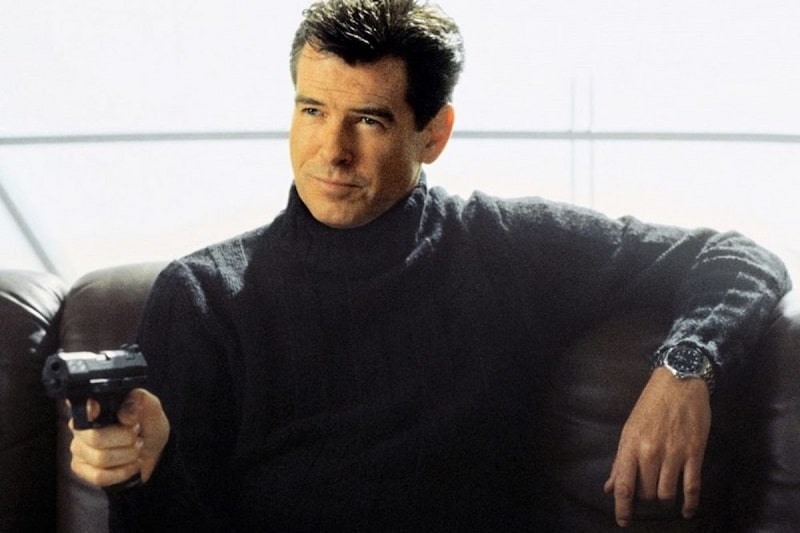 Although, this time it’s for activating the bomb in a suitcase full of diamonds during the pre-title North Korea set-piece sequence. Gotta love that hovercraft chase scene. 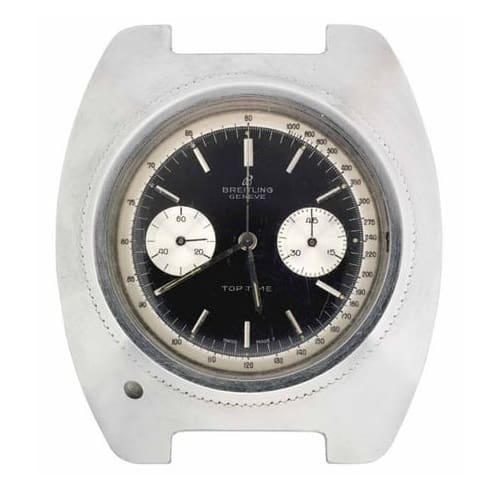 Handing Bond a whole new toy to play with, Thunderball sees a modified Breitling Top Time Chronograph that doubles as a Geiger counter. Entering the fray as the world is suddenly gripped by nuclear terror and mutually assured destruction, Bond is tasked with locating two NATO atomic bombs that had been stolen by the criminal organization Spectre. 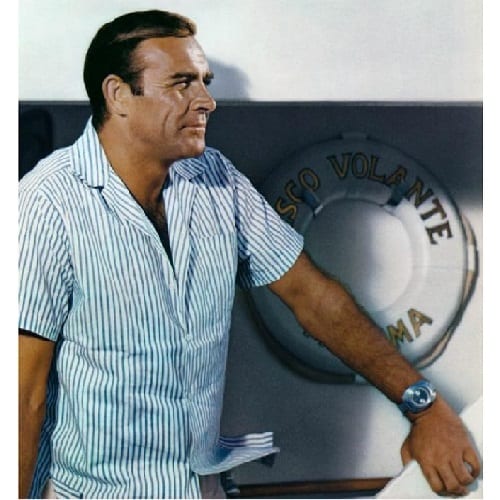 Given a modified version of the Breitling Top Time Ref. 2002 by Q to complete his mission, it is one of only two watches worn by Sean Connery during his time as James Bond, And surprisingly it’s the only one that comes with a Q modification. 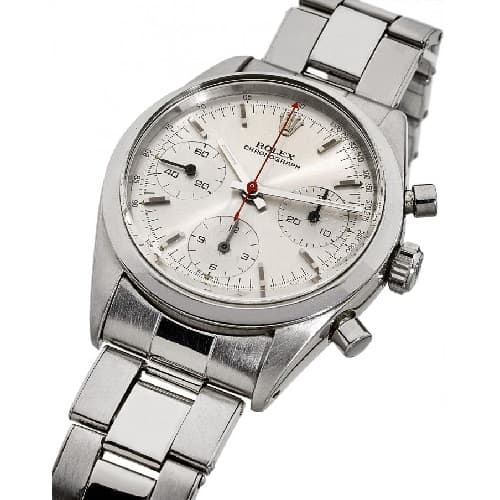 Though he only played the titular character once, Australia’s own George Lazenby wore three different Rolex Submariners during his time On Her Majesty’s Secret Service. While all technically the same chronograph, Lazenby mainly wore the Reference 5513 on a bracelet of iconic Oyster Steel. 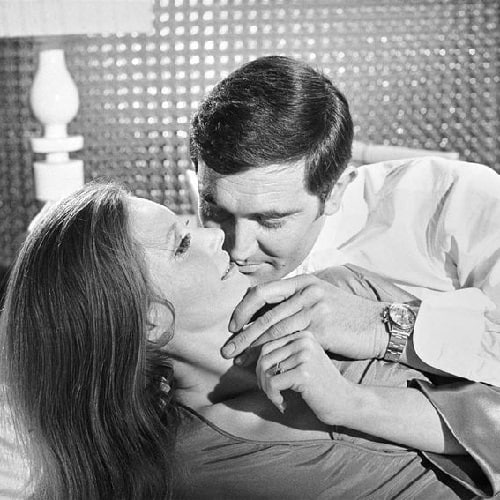 While during the break-in scene, Bond places a Reference 6358 with an unscrewed crown on top of a copy machine. Much later in the film, Bond is seen wearing a Reference 6238. 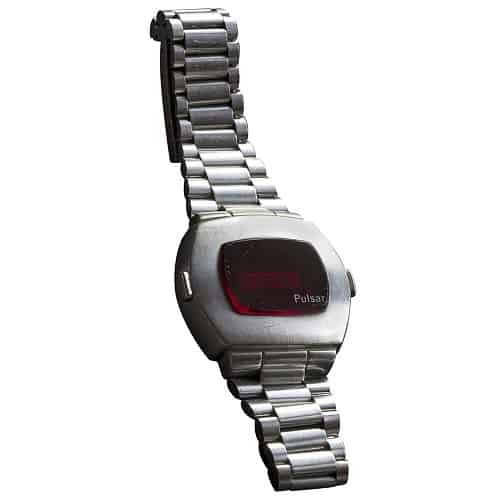 The only digital watch you’ll see on this list, and probably for good reason. As cool and revolutionary as a digital display watch may have seemed back in 1973, it just doesn’t have the same allure as its analog counterparts. That being said, the Pulsar LED digital watch from Live and Let Die is still cool enough to make our list.

Introduced as part of Roger Moore’s debut as Agent 007, the Hamilton Pulsar P2 2900 LED also introduced a whole new era of the franchise. 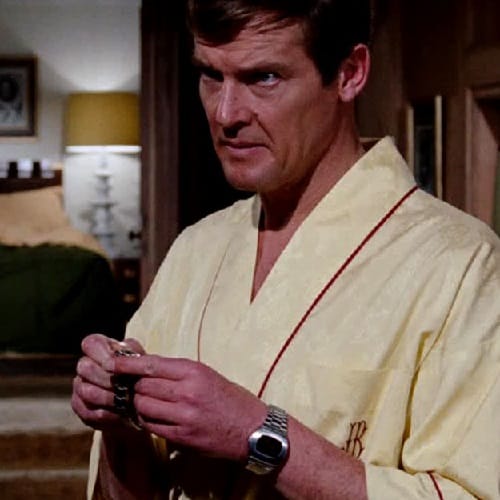 While there weren’t too many digital watches after the Hamilton Pulsar, Roger Moore did equip the Seiko M354 Memory Bank Calendar in 1979’s Moonraker as well as the Seiko H357 Duo Display in the 1981 Bond film For Your Eyes Only, and a Seiko G757 Sports 100 in Octopussy in 1983. 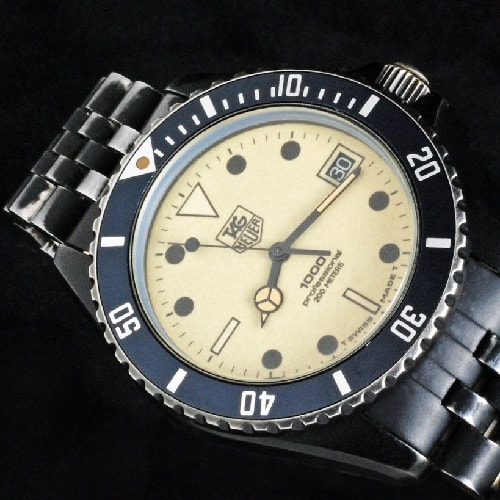 Worn by the one and only Timothy Dalton in 1987 for The Living Daylights, the Tag Heuer Professional Night Dive marked a darker and more serious tone to the franchise that would not return until Daniel Craig’s Casino Royale.

Pushing for a renewed emphasis on the gritty realism of Ian Fleming’s novels instead of fantasy plots and humor, Dalton kisses Seiko goodbye in favor of Tag Heuer and the Professional Night-Dive Reference 980.031 quartz dive watch. 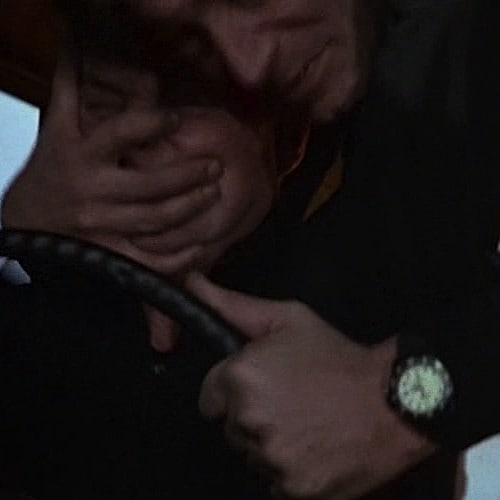 Boasting a luminous dial that is contrasted nicely against its black case and bracelet, if you needed a visual cue, this is it.