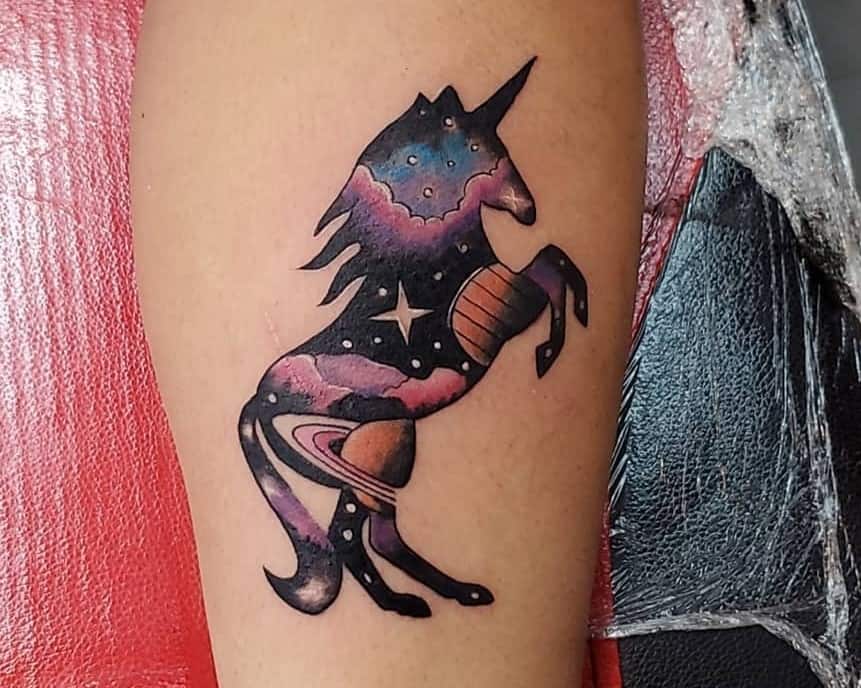 The unicorn is one of civilization’s most popular and enduring mythological creatures.  In an unprecedented era of tattoo creativity, the horned is used to represent innocence, grace, magic and mystique.

Unicorns were first described by the Greek historian Ctesias when he chronicled the distant land of the Indus Valley Civilization in the Fifth Century BC. They were described as an “Indian ass” with cloven hooves and a single horn in the center of its head, curved and spiraling to a sharp point.

The Ancient Greeks considered the unicorn a real beast rather than a mythical creature like the winged steed Pegasus. Many other Greek writers described them luridly in their natural histories.

While unicorns are now considered mythical – although in Scotland they are the official National animal – they remain popular worldwide in fairy tales, books, film, television and fashion.

While enchanting to children the unicorn keeps fascinating people as they grow from small boys kids into adults and are linked to symbolism involving magic, mystery, naivety, beauty and love.

Unicorn tattoo designs are an enduringly popular concept for a range of amazing ink applications and styles. Whether the wearer is a girl or boy, different interpretations promote impressive mythological creature symbolism.

It’s not all rainbow ice cream though – there’s an increasing subset of ink styles switching the natural innocence and magic of the unicorn for more darkly aspected tattoo design.

Read on for insights and examples into some of the best tattoo artwork dedicated to the unicorn.

The vividly neon rainbow being rent by a rampaging chainsaw clamped unicorn is effective both in concept and application, while the rest of these more lighthearted pieces offer cool individuality and deft highlighting touches – check out the white ink flourishes on John Wick unicorn – from each highly skilled tattoo artist.

These unicorns are unapologetically fun and funky. Onward noble steed! 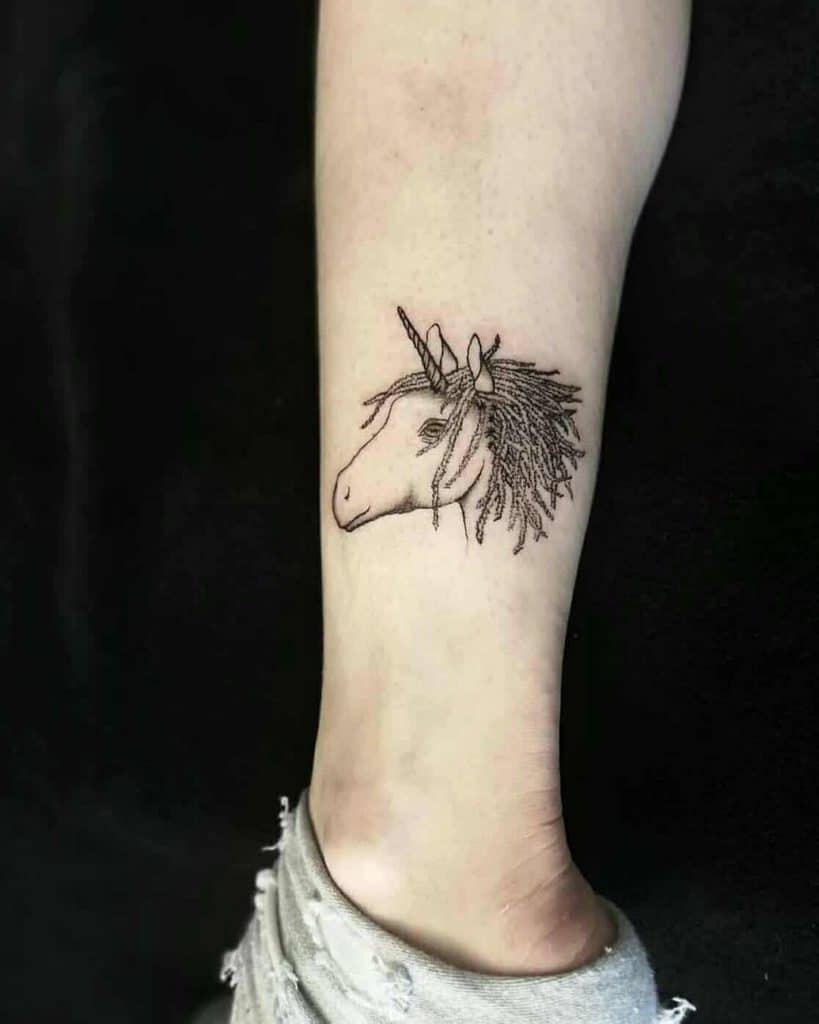 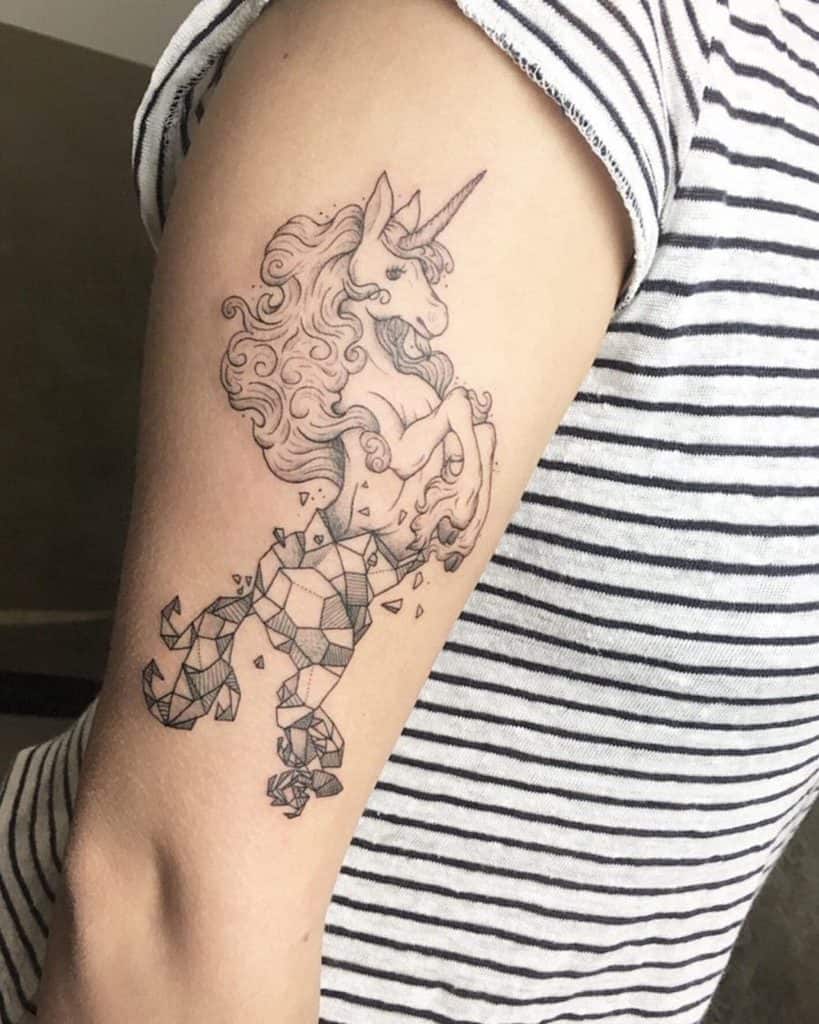 In many western civilizations, it was written into myth and magic that the elusive unicorn could only be caught by a virgin. These pieces of body art help give credence to this traditional type of story and make for a winning tattoo idea.

These deftly etched unicorn designs do a fantastic job in showing more traditional concepts of the best. Whether it’s the use of a clean continuous line augmented by a touch of watercolor to the unicorn horn, or circular black ink providing the backdrop for a demurely naked girl riding the best.

A two headed, no butt unicorn is a unique tattoo design with soft shading giving adding impressive extra detail to the negative space pale skin, while others utilize fine balance of linework, thicker lines and fractal geometry in crafting their unicorn design.

These cartoon style unicorn tattoo designs show off the concepts people keep hold of from when they were kids. There’s great range in these body art pieces such as Marvel prankster Deadpool on a rearing, tubby little stuffed toy unicorn, and the tremendous classical anime starlet with purple background and aqua marine hair.

Cartoon work is versatile. There’s nice contrast between the confused looking fellow with cleverly touched white ink and red hair perched on a cloud, and the crisply drawn linework unicorns that could come straight from the guide to being a little girl.

These interesting examples take the traditional approach of black and gray gradient color and shading, then flip the script by going with unique concepts and choice of delivery. Love the use of the Pegasus – the winged horse of Greek Mythology adds gravitas – allowing the tattoo artist the opportunity to incorporate cool technical applications to the traditional grayscale palette.

While the common perception of unicorn tattoo design features elements of innocence, beauty, grace, and love, some subjects and their artists just don’t roll like that. Here, the traditional use of baubles and beads, flowing mane, magic and fancy coats are shunted aside or subverted in favor of a darker, more tattered mythological creature consumed by rot and ruination. 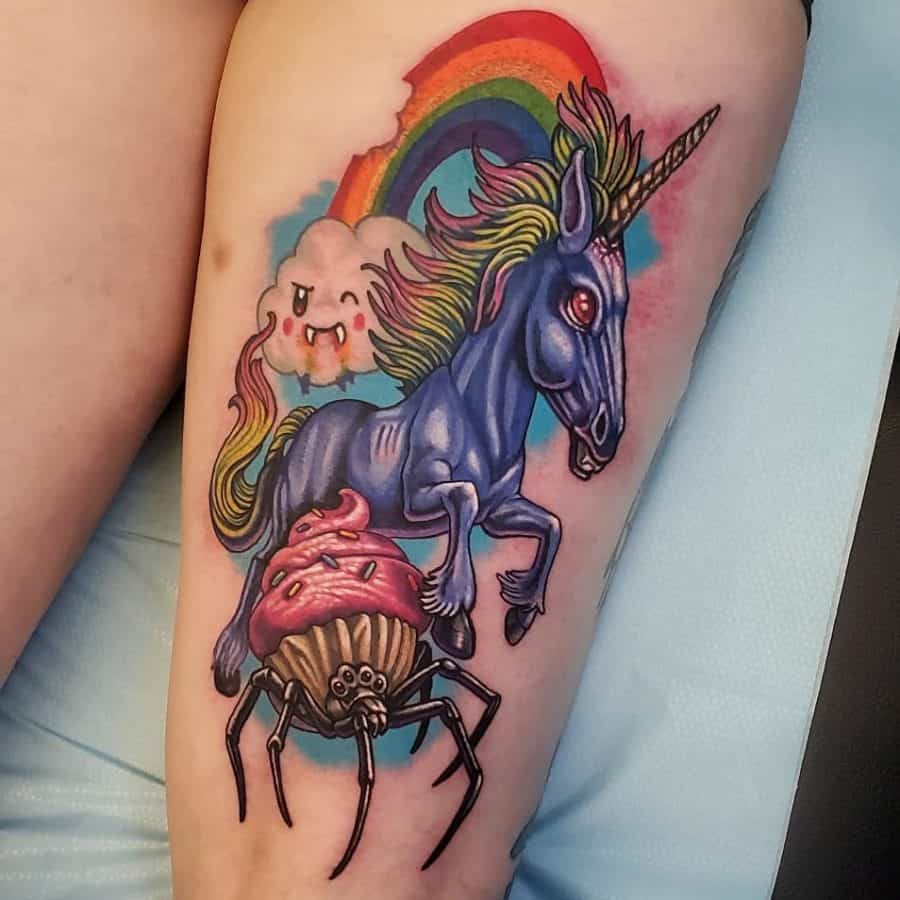 These days, awesome artwork often combines the killer traditional elements of master sailor Jerry, Mike Malone or Zeke Owen, and then ramp up the madness by using modern color, technical skills, and weird subject choices. Building on the bedrock of old school, these examples shatter the boundaries of color concepts and style. If you want a rocking horse unicorn coupled with vivid neon cupcakes, then step into the new wave chair.

You dig color? How about an animal with a virulent purple mane, a red eyed blue beast with brass horn on the run, or even a beast rocking the portrait rainbow look so fresh that the hair almost shimmers?

Some neo unicorn designs get completely weird like a traditional sun shape in the background of a precisely etched skeleton. If you can’t get it in a traditional style, get down with a new wave artist because you’ll always be welcome. 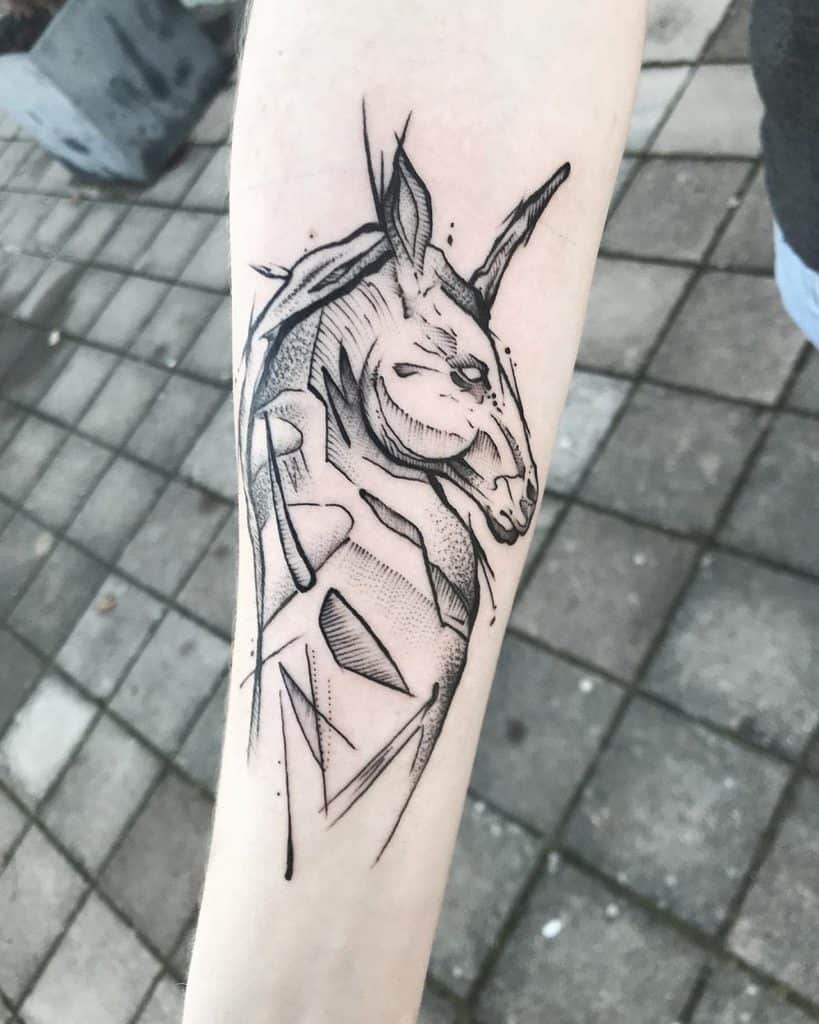 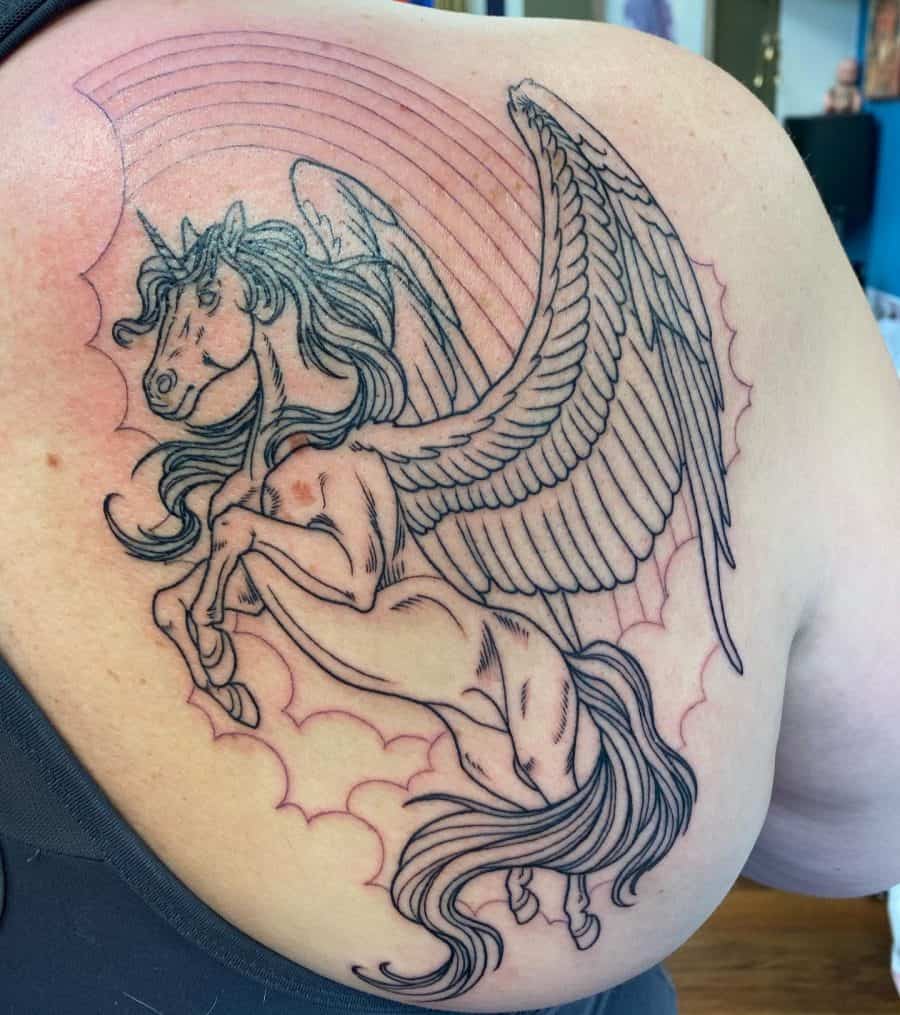 These linework examples run the gamut from simple, cleanly delivered pieces with small spaces of shading against skin, through to massively bold, large scale unicorn designs (the last unicorn could eventually be made into a fully realized body art piece).

They all share a great use of lines – short brief accents, hatchwork, or long flowing strokes of fine line. The classy linework delivery helps flesh out each tattoo idea with touch to deliver fantastic skilled art centered the magnificent mythological creature.

These colorful tattoos lack the over the top quality of the neo-traditional artwork above, however they balance classic unicorn design and different colors with technical artistry.

Dotwork is a painstaking, difficult type of style to get right, but being able to put it into a deeply layered framed fractal pink unicorn concept with a multitude of rainbow colors – and some traditional equine art – takes mastery and concentration.

Other pieces strongly work through structured unicorns balanced by a range of solid colors. The watercolor tattoos especially standout melding with top notch outlines to manufacture a unique tattoo. Watercolor tattoo is also useful technically, being able to act as a whimsical solo color or combining with a group of bright splashes to brighten up the total image.

I can’t say I’ve ever seen a mermaid/Pegasus/unicorn mash up before, but yeah, I’m down for it when done with such precise attention to detail and use of flowing line. The little pixelated fella is also cool but reminds me a bit too much of the shitty video games of my youth.

These badass tattoos could probably find themselves in other sections, but offer enough variety to stand out for their individual interpretation of the unicorn, even if one of them looks like (purposefully) a folded paper donkey with a horn stuck on the end.

What is the symbolism of a unicorn tattoo?

Traditionally the unicorn is a symbol of magic and mythology, associated with the innocence of childhood and concepts of beauty, grace, love and purity.

The horned steed has a longtime association with many different mythologies – different depictions can be found in a variety of ancient civilizations such as Indian and Greek historical art.

There is much fantasy to depictions of the unicorn in tattoo art, with some contemporary wearers opting for darker symbolism in the etching of their beast in contrast to the brightly optimistic traditional symbols. This shift from some subjects is a noteworthy development and will be interesting to see continue to be explored.

What is the Pegasus?

The Pegasus was the mythical winged horse of Greek mythology who the hero Bellerophren rode to battle the Chimera. There’s plenty more to the Pegasus story than that – the details of his birth, and his change into a constellation by the hand of Zeus are way out there. For our purposes, noble winged steed used to fight a lion with a goat’s head sticking out of its back and a tail made from serpent suits well enough.

Yes, there a plenty of hybrid Pegasus/unicorn tattoo mash ups. Funnily enough, they’ve been referred to as Pegasus Unicorns (although the wag that first came up with the term Pegacorn needs a high five). Realistically, there’s not a lot differentiating them except one has wings, and the other has a horn.

Did you enjoy these unicorn tattoos but are looking for more inspiration. Click on the links below for more ink galleries: