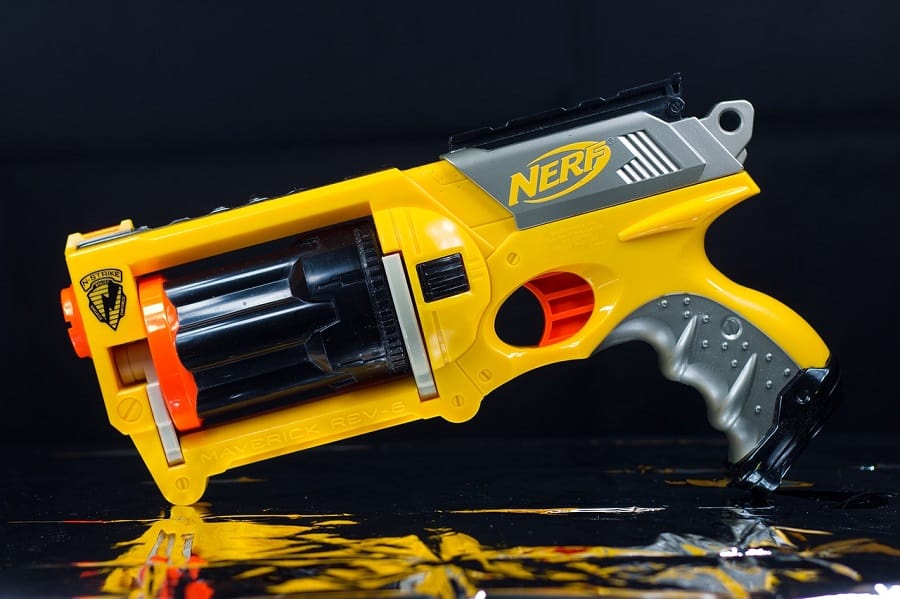 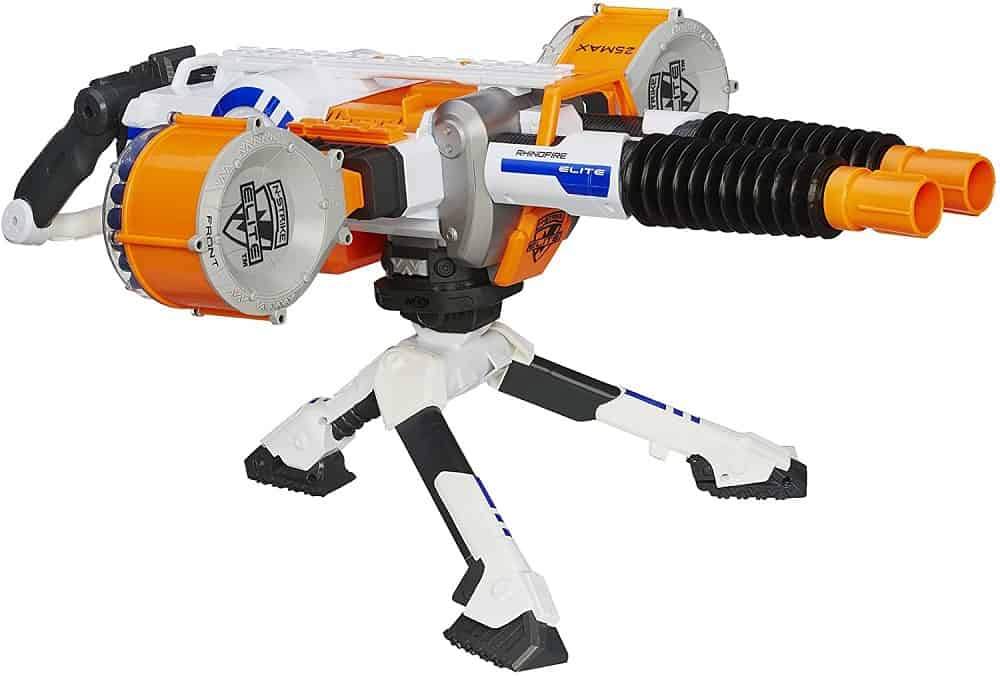 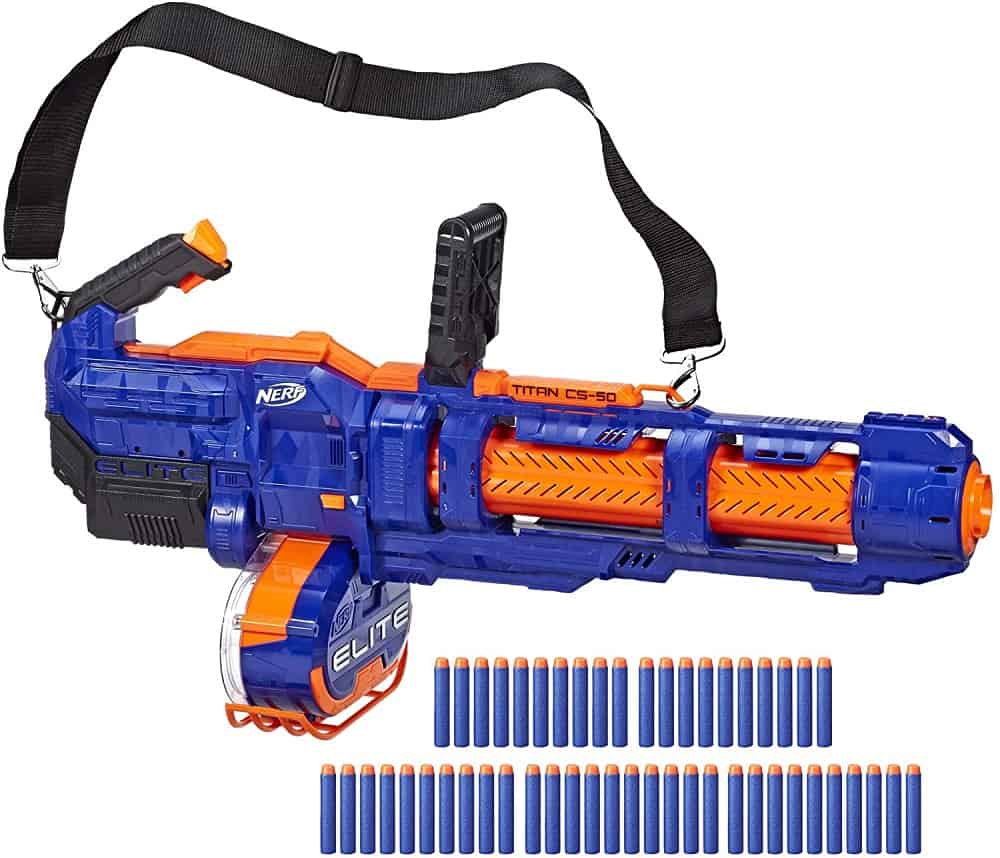 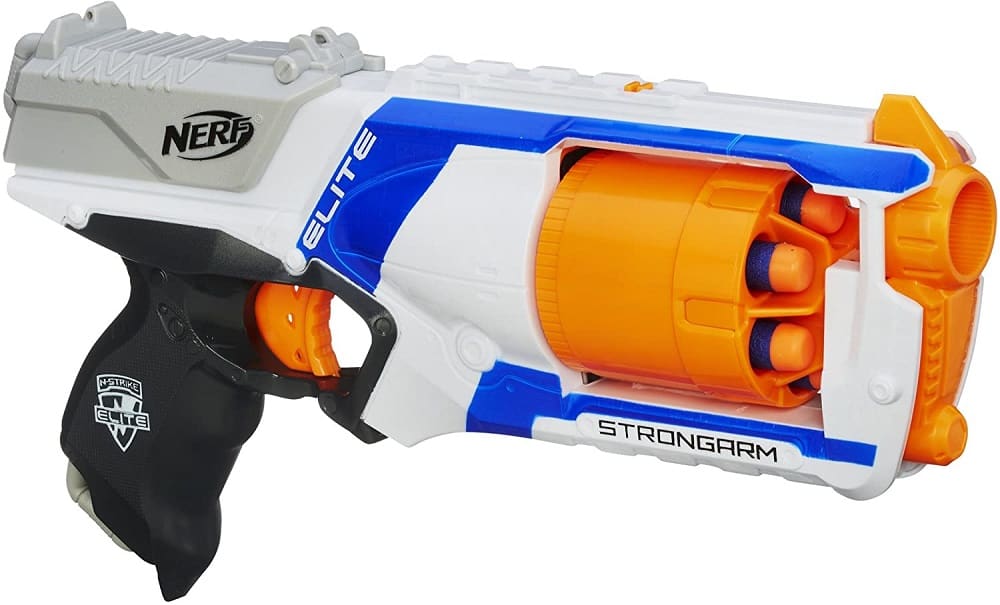 Let’s cut to the chase; no one will ever outgrow blasting darts in the never-ending battle for Nerf supremacy.

Nerf guns don’t go out of season either. There’s no better time than now to get one of these badass weapons and head to the battlefield.

But gone are the days when toy blasters featured the same basic (and boring) look. Choosing one is a bit trickier now because they come in a vast range of options – some impressive and others, well, not-so-great.

You’ll find 13 of the best Nerf guns suitable for battle-ready individuals of all ages on this page.

The N-Strike Elite Rhino-Fire Blaster ranks among the best Nerf models available. The intense, double-barrel blaster makes most other options pale in comparison.

Detachable tripods allow for a steady aim from a stationary position. It can launch a blizzard of darts at your enemy from up to 90 feet away from the double-barrel. The blaster features two drums with 25 darts each that fire rapidly, thanks to the motorized blasting.

Take your shooting game to the next level with this monstrous, powerful, but safe toy machine gun. The Ner Elite Titan is definitely a high-end and pricey option, but it’s worth every single dollar.

Equipped with a 50-dart capacity drum that is fully motorized for a massive and rapid firestorm, this behemoth blaster is most suitable for grownup fighters. It features an over-the-shoulder strap to make carrying a lot easier.

You’ll need 4 D batteries to power the spinning barrel. This beast of a toy is your best bet if you’re looking for some adrenaline-pumping fun with dart-firing Nerf action.

Want the best bang for your buck? Check out this moderately-priced toy blaster. Capable of firing darts up to 90 feet, the revolver-style handgun feature 6 Elite darts and is also compatible with several other Elite darts, giving you lots of ammo options.

It’s easy to assemble and use, but don’t be fooled by its simplicity. This badass handgun will impress where it matters.

Kids, teens, and adults consider this Elite blaster as one of the best Nerf guns out there when it comes to affordability and value. Little wonder it has over 14k reviews on Amazon with an impressive 4.6 out of 5-star rating.

Your roomie definitely won’t like to be on the other side of your barrel if you are wielding the futuristic Doomlands Lawbringer Blaster.

But regardless of the unfamiliar look, this Nerf gun is actually easy to operate. It features a standard spring trigger and a 12-dart rotating barrel that loads manually.

Besides giving off an intimidating look, this is a great Nerf gun for decorating your mantle. 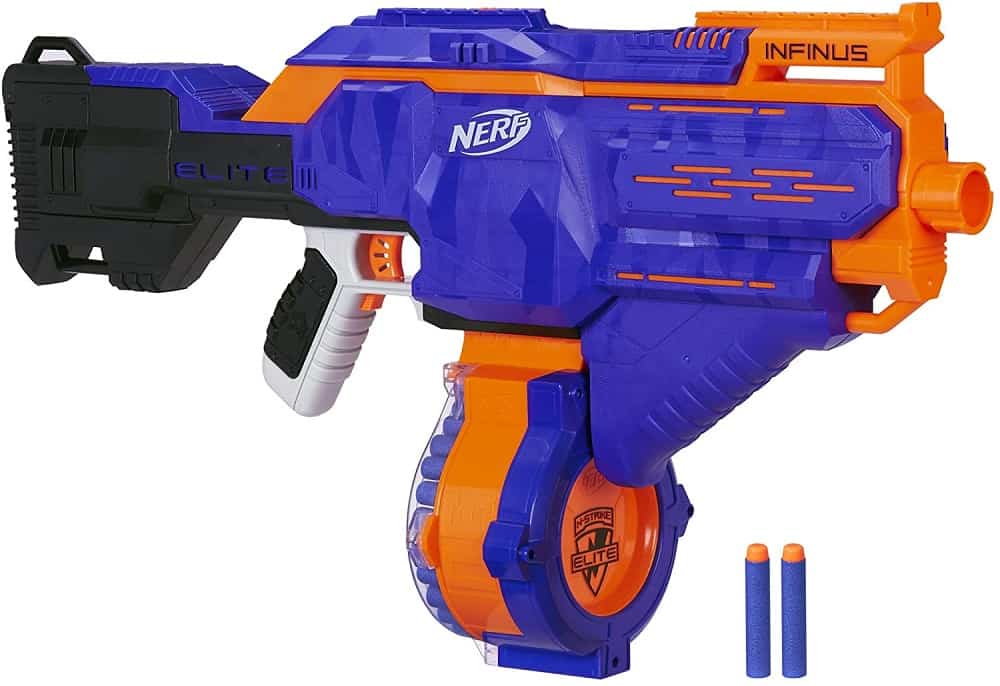 The speed-load technology started with this motorized toy blaster. Unlike some other models, you don’t have to remove the drum to manually load the Infinus N-Strike Elite Toy Blaster. You can continue firing to keep your enemies at bay while you reload darts.

The 30-dart drum capacity gives you enough ammo to shoot with. Plus, the toy blaster is compatible with all Elite N-Strike darts. This gives you plenty of options to choose from.

Regardless of its big size, the fully motorized toy gun is lightweight and suitable for anyone from 8 years and above. 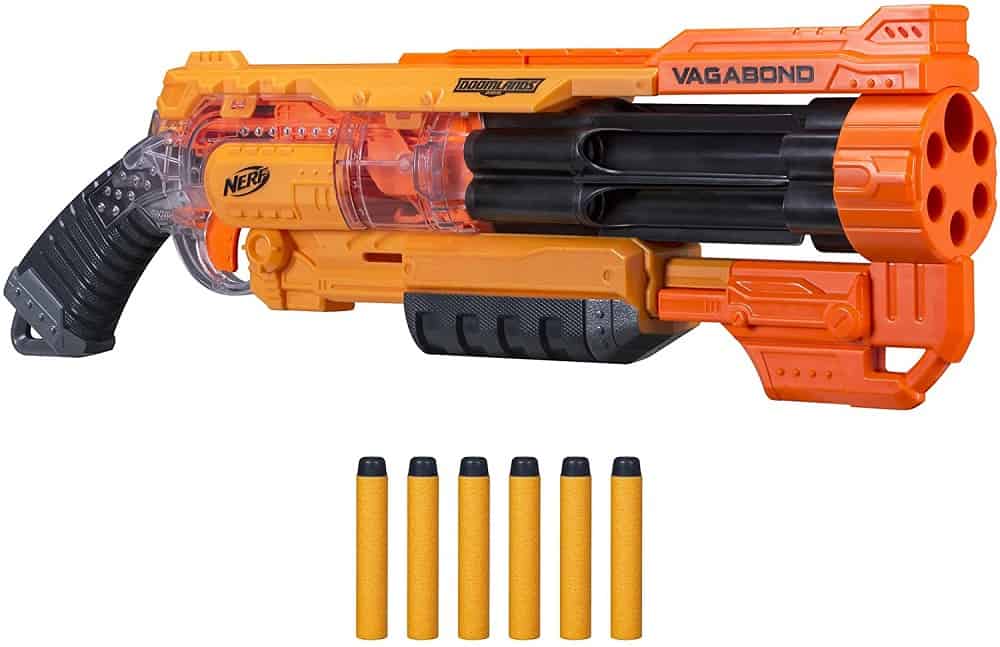 If you liked the Doomlands Lawbringer (probably because of its intimidating looks), then you’ll fall head-over-heels for the Doomlands Vagabon Blaster for its impressive performance.

This model has pump-action blasting, but it doesn’t load any of its six darts through the front. Feed them into the slide cylinders and prime them for pump-action.

The blaster comes complete with two lucky charms with bracelets, you know, just in case you believe in lucky charms.

Want to be the ultimate zombie hunter? Trigger happy isn’t going to cut the deal. You’re going to need a suitable weapon like the Crossfire Bow Blaster that allows you to take your time with your shot.

Strut around confidently like a true survivor of The Walking Dead while you take aim at the undead with the bow blaster’s quick pull and fire mechanism.

You’ve got only four darts, so use them wisely. But since they’re not expensive, you can easily stockpile and hunt down every single zombie in town. 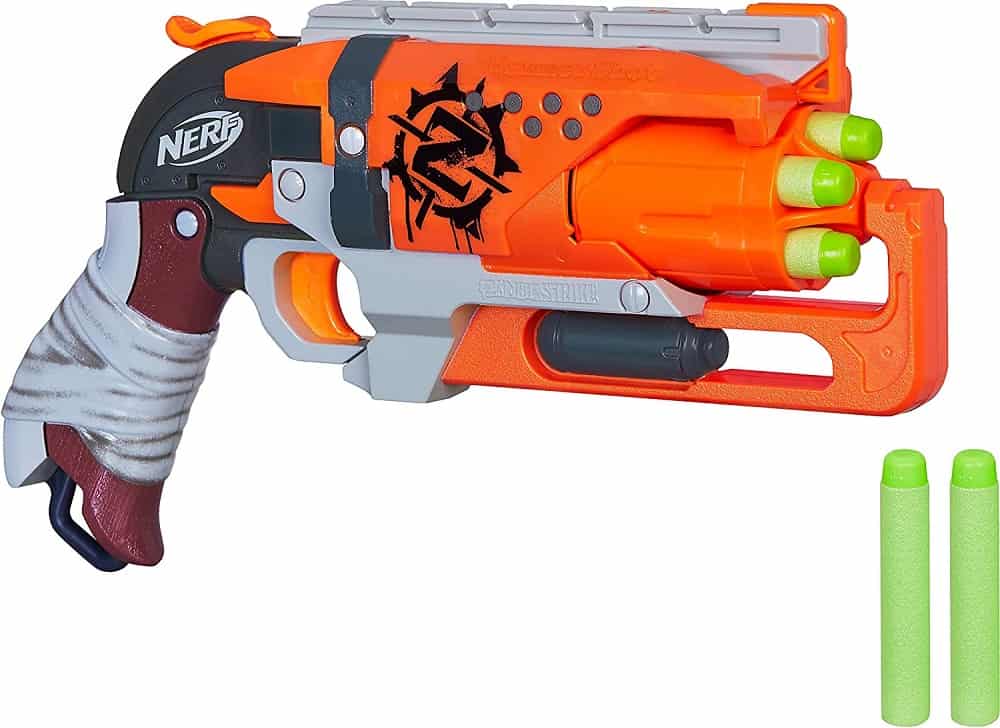 Thinking of taking down zombies but don’t dig the idea of a bow blaster? Not to worry, here’s another excellent option.

The good thing about this smooth blaster is that you can modify it to shoot faster, harder, and further. Plus, it is easy to maneuver, so the zombies don’t stand a chance of winning the battle! 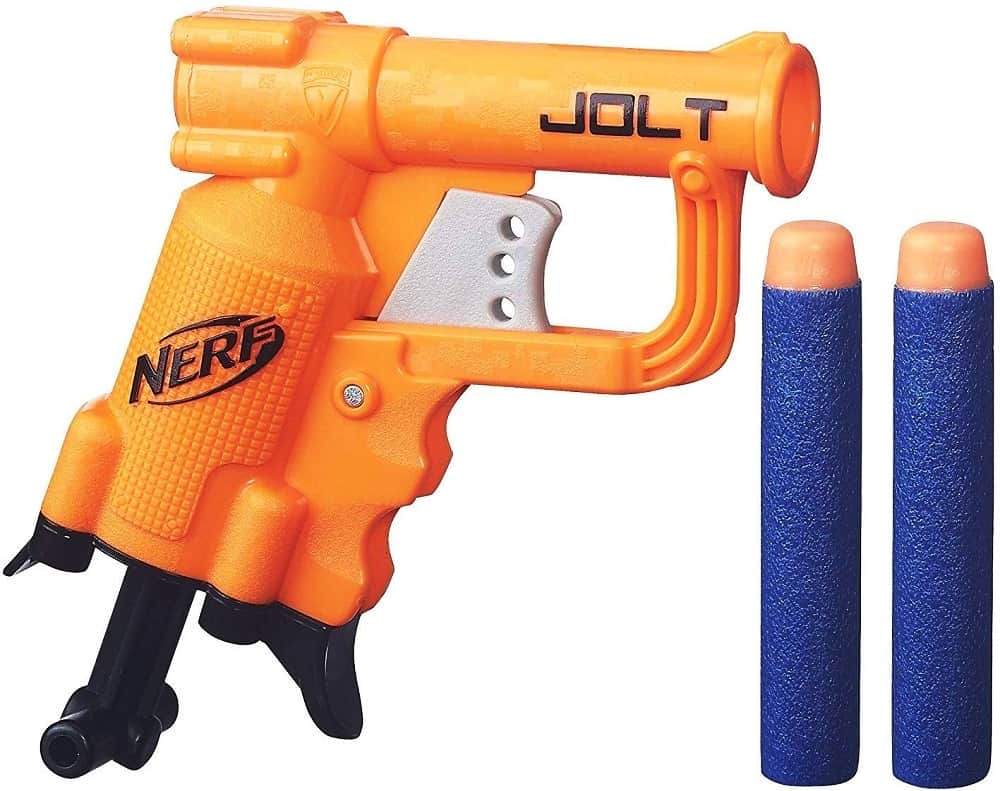 Looking for a pocket-size toy sidearm? The N-Strike Elite Jolt Blaster fits the bill perfectly. Available in green, blue, and orange colors, this compact single-shot blaster does its job effectively.

While it won’t deliver the firepower of other high-powered options, it is an excellent option with it comes to discreet operations. It is incredibly lightweight, making it suitable for Nerf enthusiasts of all ages.

The Elite Jolt Blaster comes with two Elite darts, provides high accuracy, and would make a perfect birthday gift for kids. Although you don’t need lots of money to buy this gun (it’s the cheapest on the list), you’ll need a few practice shots if you’ve got bigger hands.

Stealth mode activated! It’s time to evade and take peg down your roommate with this one-of-a-kind Nerf gun.

The Modulus Ghost Ops Evader features a transparent shell that lets you see the semi-automatic mechanism. This is one of the best Nerf guns when it comes to customization.

It offers about 1,000 different combinations made possible by a system of accessories, gears, upgrade kits, darts, and others. It works for just about any mission or battle.

The good thing is, even in low-light conditions, you can light up this blaster with the press of a button. Now, even pitch-black darkness can’t stop you from hitting your target. 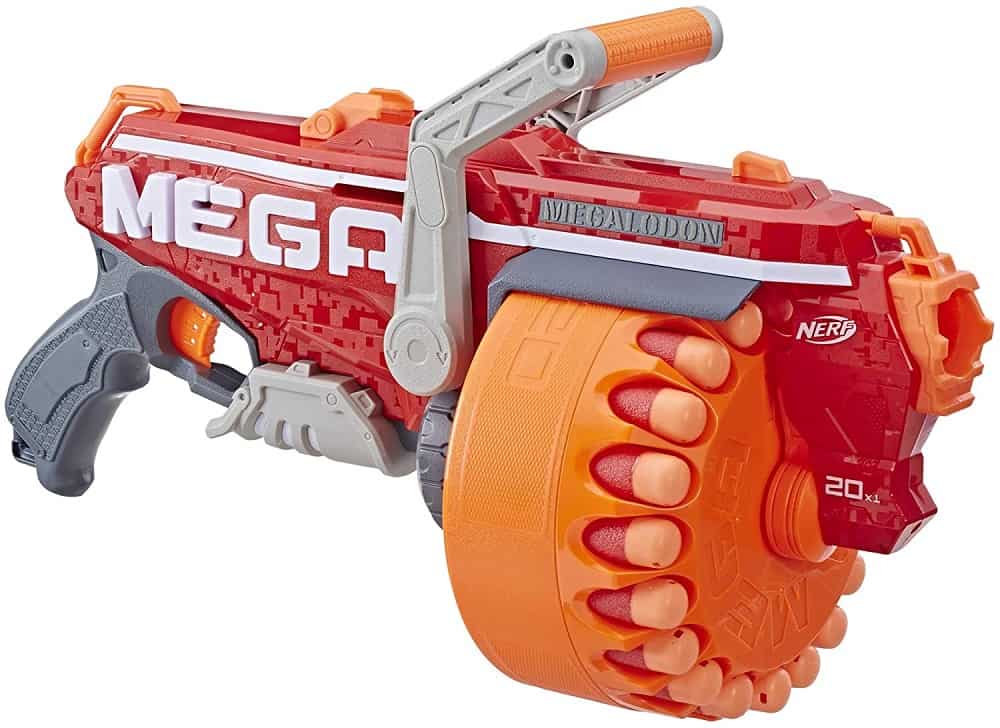 The Megalodon Blaster definitely looks beastly and intimidating – perhaps, a little more intimidating than it actually is. You can easily wield this toy weapon in one hand during intense Nerf battles.

But don’t ever think it would go easy on your enemies or target. Equipped with a 20-dart rotating drum that spits darts up to 85 feet, this blaster can be your trustworthy ally.

You can quickly switch between rapid-fire and single fire action with this beastly-looking toy. Reloading might not be as fast as other options, but hey, you’ve got more than enough ammo to peg down your enemies.

If you liked the popular Fortnite video game, this is your chance to experience its famous assault rifle. But this version is even better as it comes in bright colors and packed with a rugged personality.

Nerf put some work into this one by including two flip-up sights, a stock that lets you brace the gun against your shoulder when taking aim, and 10 dart clips with 20 Nerf Elite darts.

This is simply one of the coolest Nerf guns available. As long as you fall within the ages of 8 to 99 years, feel free to get four Double-A batteries and blast away!

Featuring last on this list, but by no means the least, is the Nerf Rival Nemesis MXVII-10K. There’s hardly any Nerf gun that matches the Rival Nemesis when it comes to long-distance shooting. It is built to fire with ultimate precision from up to 100 feet away, making it one of the best Nerf guns in that category.

There’s absolutely nothing to assemble with this Nerf gun – you can start blasting right out of the box. The larger handle makes it suitable for adults and older kids. Plus, it can be used ambidextrously, thanks to the safety on both sides.

Power up this gun with 6 D batteries (not included) and experience a fully automated Nerf weapon in action.

Head into the most intense Nerf gun battle with the Rival Nemesis, confident that your enemies will either surrender or be gunned down before you reload the impressive 100 rounds.