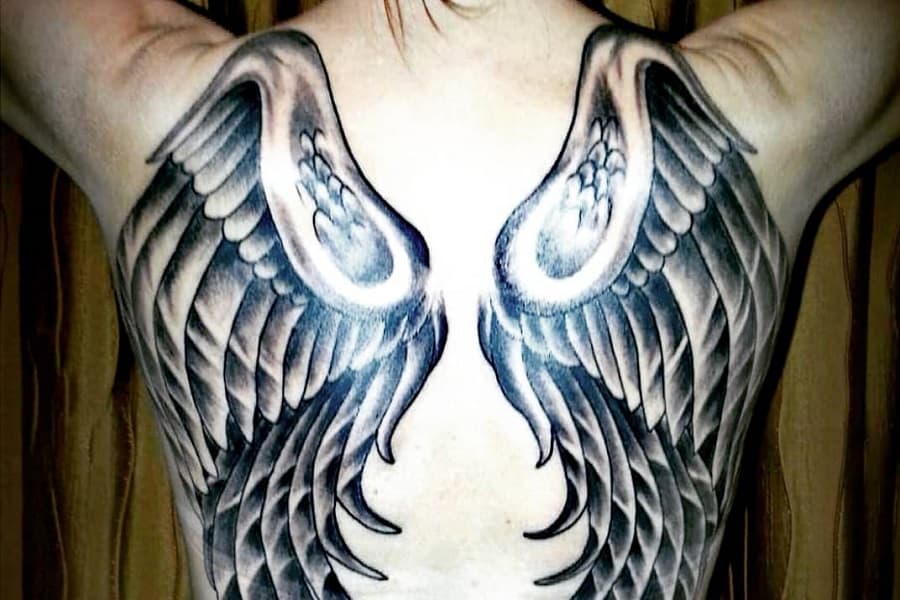 Traditionally, an angel symbolizes protection. An angel tattoo describes a guardian who is literally a messenger from God. An angel’s wings allows them to travel to and from heaven to help in your time of need.

Angel wings tattoos are also often linked to the passing of family and loved ones, with those lost transitioning into a protective guardian angel to watch over the wearer.

Wings tattoo can be commonly associated with both birds and angels. Tattoo depictions of these often look very much alike, with a specific portion of the tattoo design differentiating if it is one or the other.

The angel wing tattoo style can be purely a depiction of religious faith, however symbolism that features an angel’s wings takes on new meaning with the idea of protection and guidance.

Incorporating an angel or other religious symbology into your wings tattoo is a good method of adding further meaning to your body art. Utilizing crosses, halos, and different application style depictions such as black ink or feathers creates contrasts within designs, so you’re able to communicate your idea effectively.

For most of us, an angel wings tattoo design associates itself with the notion that everyone has a guardian angel watching over them, serving as a reminder that we can provide ourselves with judgement from a perceived positive outside influence.

Read on for angel wing tattoos inspiration that could help you with your first piece of body art or be the basis of your next tattoo.

Utilizing full angels in your wing tattoo design is a bold choice, requiring some research. One of your first choices is what type of angel you want and whether they’re classical, cherub, cartoon, or human realistic. You can also go old-school and depict your angel as a woman in stone figure.

A warrior angel’s weapon adds another option, with intimidating wings, swords and all the power of a heavenly messenger. These winged angel examples are a mixture in tattoo styles and body position but are etched cleanly in black and grayscale shading that mix great attention to detail with shaping the body and angelic wing to strong effect.

Man’s desire for wings likely goes a long way back, as does the association of winged angels as protectors. Angel wing chest tattoos give massive scope to explore this elemental side of things, whether from a religious perspective or art. Mythology, crowns, crosses, bright beams and roses are popular symbolic imagery that tie in perfectly with angel wings.

I like how these chest tattoos play with the feather tattoo style and function, often tying the design element to the central focal point such as an edgy, bolder cross and slashing of feather versus detailed opulent crown that’s colored in with care, for example.

In these types of designs, most often the angel wings tattoo is used to depict and commemorate the loss of a loved one. Halos are used to symbolize that someone has passed away and now act as a protector or heavenly guardian to the memorial tattoo wearer.

The cross can also be used in this fashion, but mostly they are used in conjunction with the angel wings to create a tattoo reminder of the power and support that faith can bring.

These angel wing tattoos work well as both commemorative tattoo art and as symbolic reference to Christianity, reflections on faith and protection to the wearer. Some are big wing, highly detailed pieces of art, while others feature a small angel wing meant to remind and nothing more.

These forearm depictions are interesting in that they mix both single wing and paired angel wing tattoos, and can be indistinguishable from a bird wing. Fine detail and shading, linework, and white ink highlights can often make or break one of these tattoos, so make sure to get the placement right!

These examples are gorgeous to behold, sure attention-grabbers that make a real statement for each wearer. These are also the wing tattoos that most closely resemble the angel’s wings from a realistic and popular culture standpoint.

Full back angel wing tattoos can be interpreted in many ways. Sometimes they are looking to make a religious statement, in either the positive or negative. Often, black wings, or a burned or broken wing bring to mind the image of a fallen angel or troubled guardian.

Both can be rendered stunningly, but make sure to sketch out several possibilities – also when planning think: do I want one wing or two? If you’re unsure, run your idea past a tattoo artist or utilize a temporary tattoo idea first to make sure you’re going in the right direction.

These innovative angel wing designs not only work on feathers but also other design elements, or incorporate different images for symbolism, such as the protective sword, script, or the wing, heartbeat and halo for a lost loved one such as a newborn daughter.

Choosing a linework angel wing tattoo or tiny set of wings is a matter of personal preference. It’s a good way of honoring a loved one with a memorial tattoo.

You can keep a small linework piece design hidden away or placed simply, or focus on the line detail to work against negative space or the contour of the muscle or bone beneath.

I love how the bright color palettes and new wave thinking gives a vibrancy to each wing design. They show a disregard for convention and an exuberance despite still maintaining the seriousness of memorial or protective aura.

Those that have died are now protectors for the tattoo wearer.

Fine line and black and gray or limited low saturation colour schemes are popular choices. These angel wing examples show off excellent variety in wing shape and texture while being placed in areas that are sensible for the single wing style, such as the shoulder or along the upper or lower arm.

Choosing a small angel wing tattoo or tiny wings is a matter of personal preference. It’s a good way of honoring a loved one with a memorial tattoo, or if you prefer to keep a small tattoo design hidden away or placed simply on the shoulder blade of inside upper arm.

Some sizes and shapes work better on certain body parts and areas than others. When you go a small angel tattoo, it can really open a variety of style options. These examples show off the use of white ink highlights or delicate placement.

What do angel wings tattoos mean?

Traditionally, angel tattoos symbolize protection. Winged angels are guardians who are literally messengers from God to humans, their wings allowing them to travel to and from heaven.

Angel wings are also often linked to the passing of family and loved ones, with those lost transitioning into a protective guardian spirit, or even angels of God as well.

Fallen angels reflect the path Lucifer took when he was dumped from Heaven and cast down into Hell. Fallen angel tattoos most often describe references to pain, suffering, and sadness.

What do wing tattoos mean?

Outside of religion and protection, wings have made their way into ancient tales from practically all cultures over the globe. Man’s desire for wings goes back to the dawn of time – enviously watching birds soaring through the sky.

Wings can also represent flying away from something. They can be used to depict a difficult childhood, dead-end hometown, or a different version of yourself that you’ve left in the rear view.

Did you enjoy these angel wing tats ? Click on the links below for more inspirational tattoo galleries: