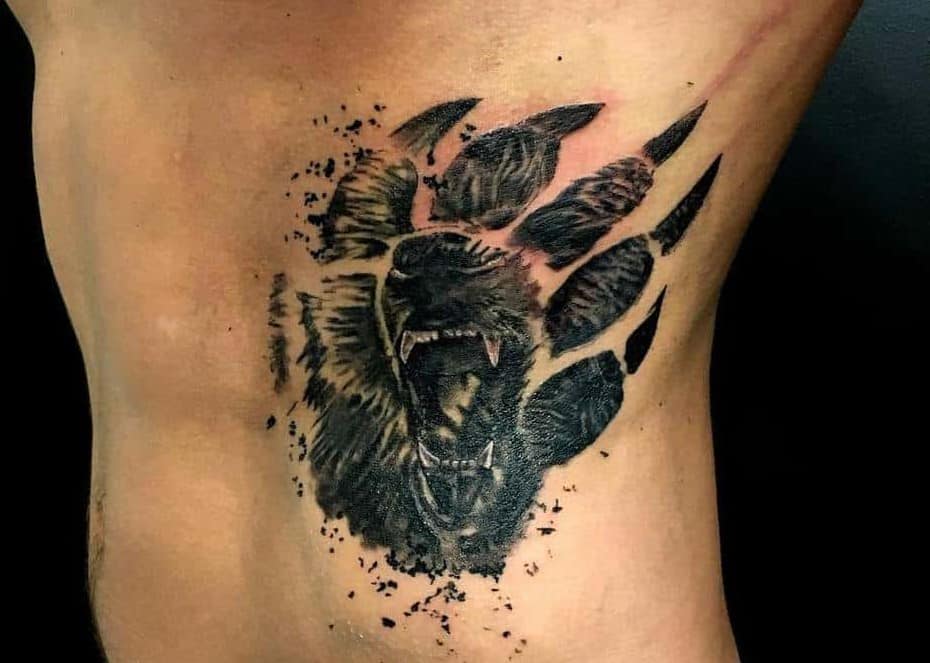 The bear is an eternally popular animal tattoo motif most used as a symbol of strength, confidence, and fierce protection. A Bear tattoo idea can also be linked to conservation, growing up, relaxation, and medicine.

Bears are admired for their physical strength as well as being representatives of both the brutal and gentle aspects of nature: the mother bear, for example, is a tender parent but a fierce protector of her cubs.

You can find all kinds of bears roaming the wild that are incorporated into body art – from the large grizzly bear and black bear tattoo to more abstract concepts to the (comparatively) gentle panda bear.

For some collectors, a bear paw or bear claw tattoo might be the tattoo style choice they are looking for, incorporating the bear symbol into a culturally significant tribal bear tattoo design or geometric tattoo.

The following story examines the major symbolic meaning that permeates bear tattoo design, as well as some of the conceptual, stylistic, and technical approaches to capturing the bear spirit in body art pieces. 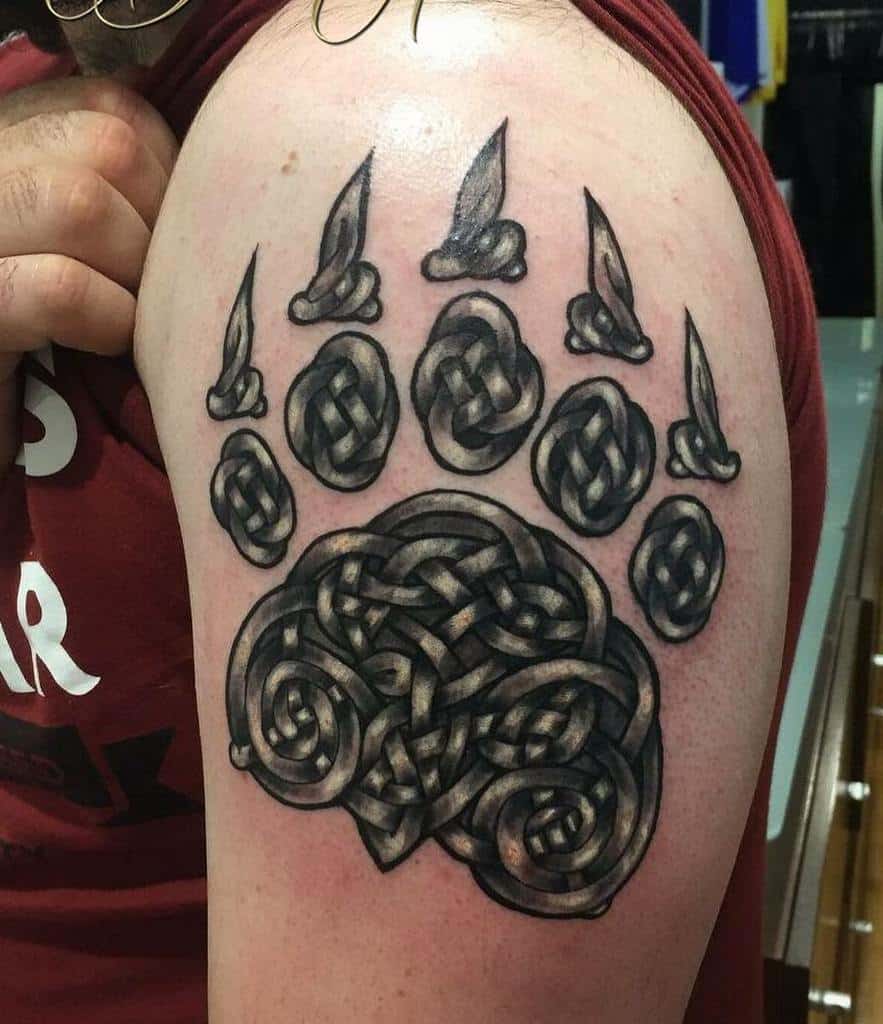 Though bears are often seen as wise sages, they can be ferocious warriors, melding traditional aspects of care, protection, and wisdom with characteristics of power, strength, and savagery.

This makes different types of bears popular as an animal totem in a variety of tribal tattoo styles.

Bears have been represented in almost every culture, from the Old Testament and ancient Norse mythology through to extensive representation in Native American folklore.

Siberians viewed the bear to be one of their forefather’s spirits, while Korean mythology has been said to see bears as past ancestors.

Norse mythology believed that Odin, the god of healing, knowledge, battle, sorcery, and death, was often accompanied by a bear.

Celtic tradition honors the bear as the incarnation of the Primal Mother, to whom we are all children and therefore under her eternal protection and guidance.

The Celts followed a faith that was tied to the earth and seasons; just as the bear takes to hibernation in winter, so too did the Celtic people pass the cold, barren months in rest and reflection. 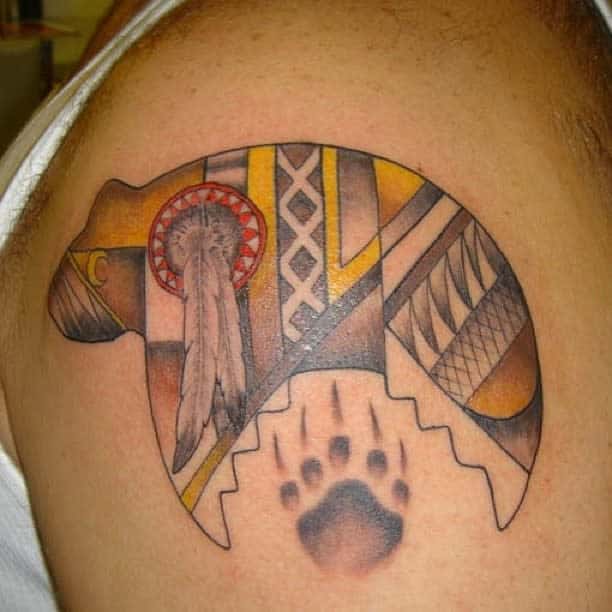 In Native American culture, the bear is a symbol of power, often worn by those who feel a deep connection to the animal. The bear paw is also prominent and used as a form of protection.

The Native American Sioux have legends about a bear who traveled the world teaching the healing arts.

The black bear is tied up in many stories related to health and medicine for many Native American tribes. For the Sioux, bear meaning symbolizes healing and the honor of a successful hunt.

Native Americans believed that the bear represented courage, and stubbornness, with the mama bear representing unquestioning protection of her young no matter the odds. 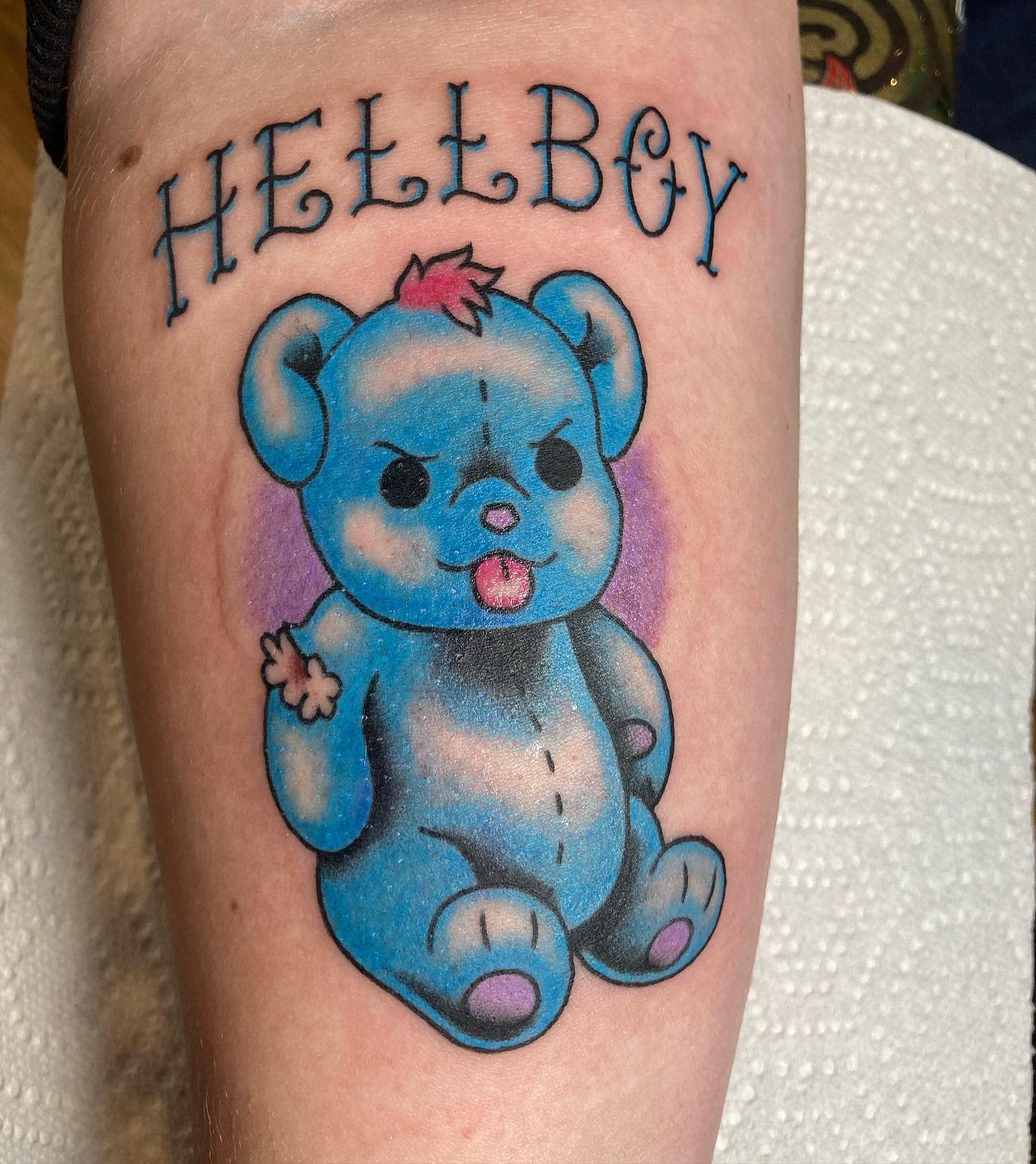 For most, the fluffy brown bear offers unconditional love, a calming influence, security, and companionship.

Teddy bear tattoo art is very much a modern ink phenomenon, although grizzlies and black bears have a long history in American traditional tattooing. 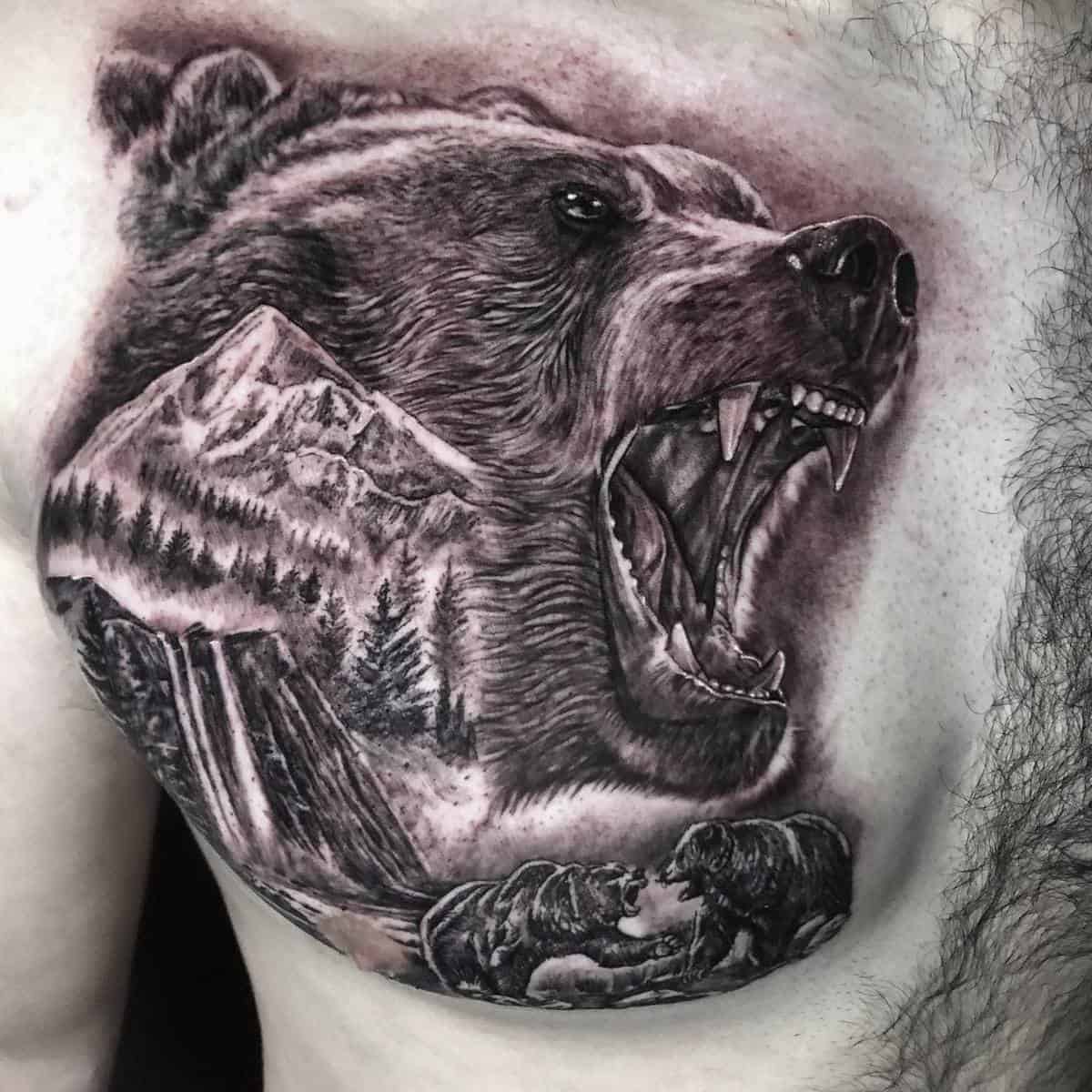 One of the most recognizable bear tattoo choices is the black bear, the smallest and most widespread of North American bears.

They’re often associated with medicine and healing and have a strong connection to Native American folklore.

Black bear tattoos are popular for a range of different collectors, from those who enjoy the mountains and great outdoors, to those who love an old-school style or simple black ink tattoo. 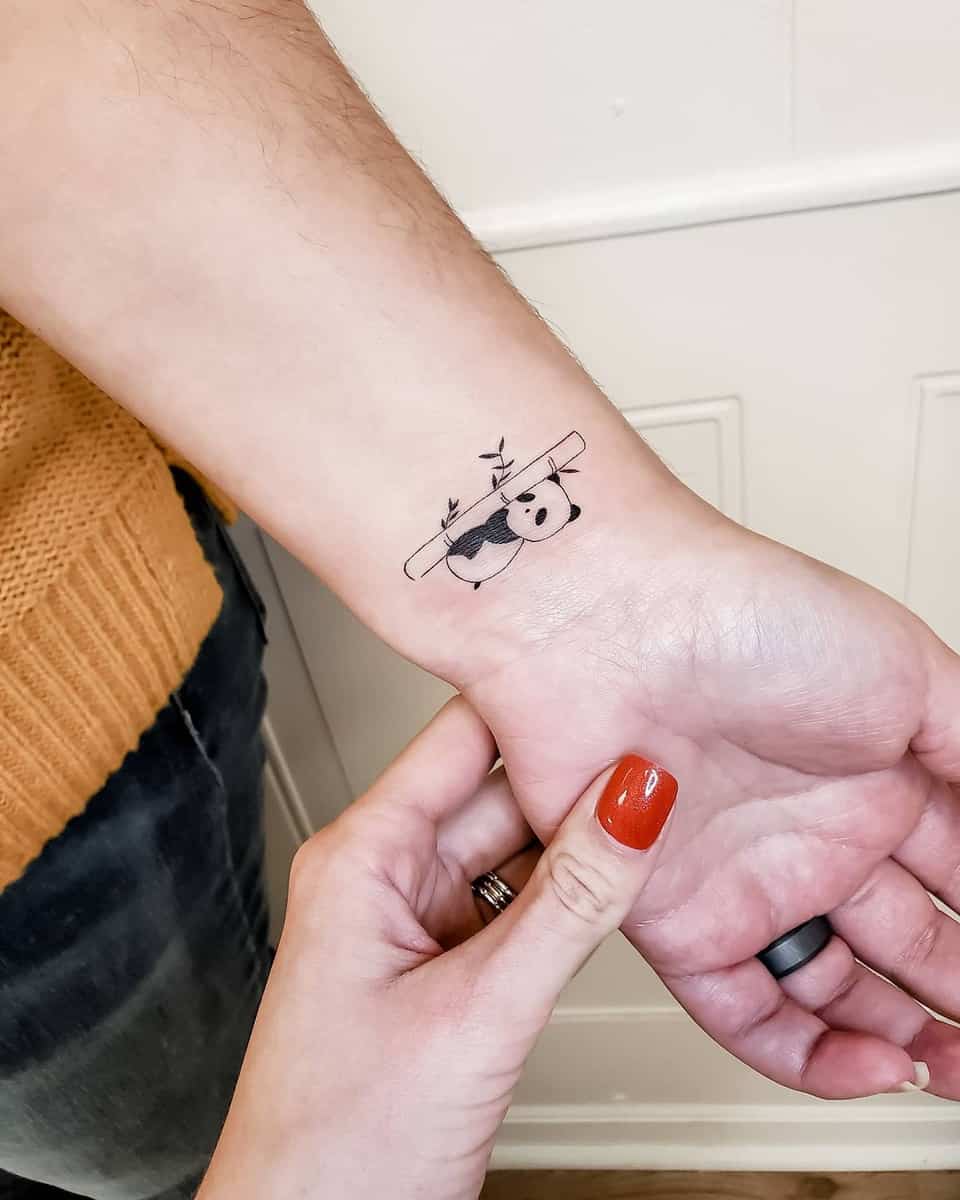 A well-etched Panda bear tattoo is badass, and a change-up from more fearsome bear tattoo designs.

Pandas are the embodiment of peaceful attitudes and a desire to pursue relaxation at all costs. A talented tattoo artist can show this point of difference in behavior when etching a panda bear tattoo.

A looming physical presence can be tapered by a panda tattoo, especially since these giants are defined by an overwhelming theme of gentleness, or utilized in contemporary cute designs such as teddy bears or cartoon art. 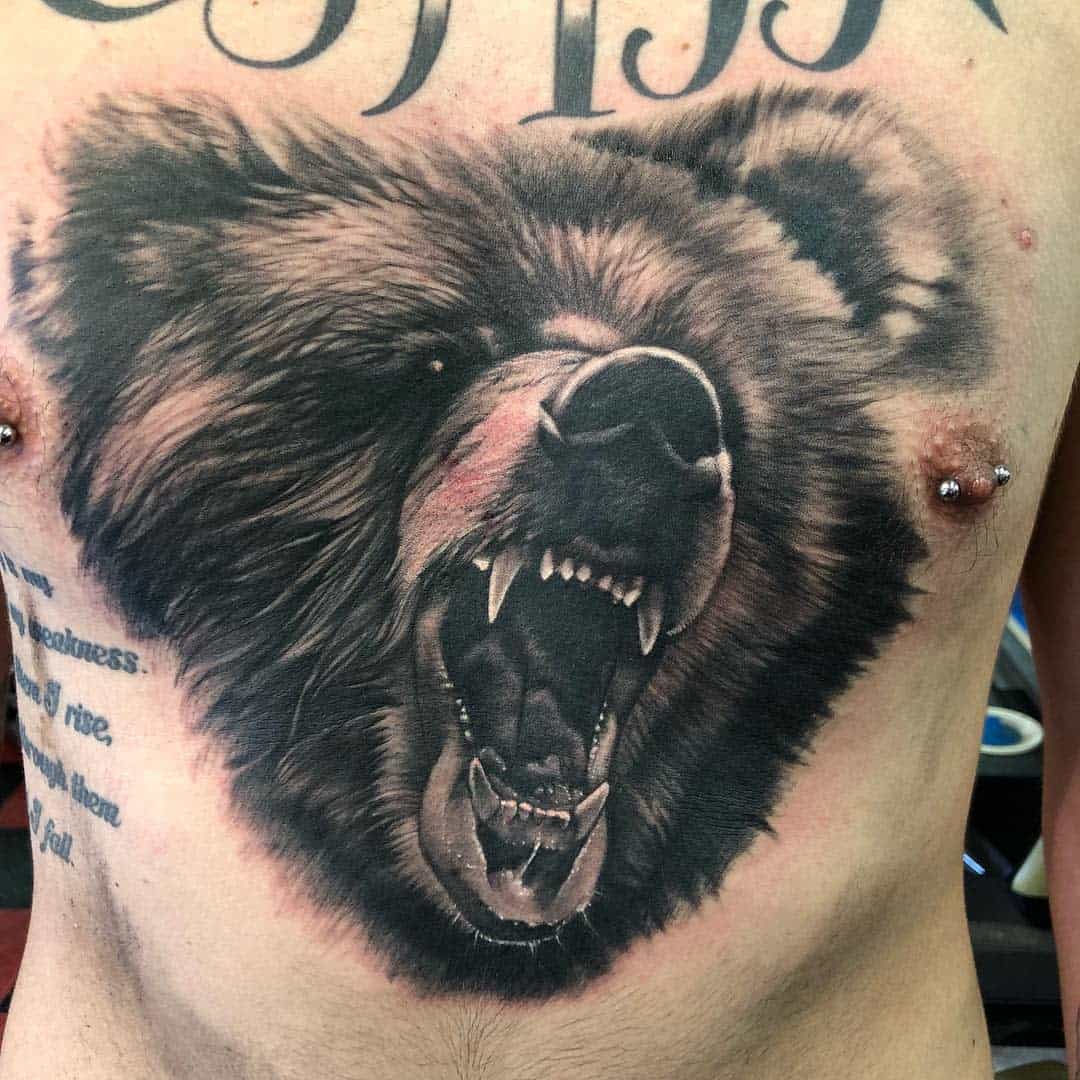 These grizzly bear tattoos carry plenty of symbolism and are the most depicted bear used in realistic and traditional tattoo designs.

Grizzlies, being the state animal of California, are also utilized in California bear tattoos that combine geographical patriotism with a bold bond to one of Earth’s most ferocious creatures.

Grizzly bear tattoos are versatile enough to be used in other styles as well, from cartoon bear tattoos and neo-traditional ink to more tribal tattoo bear claw and paw ideas. 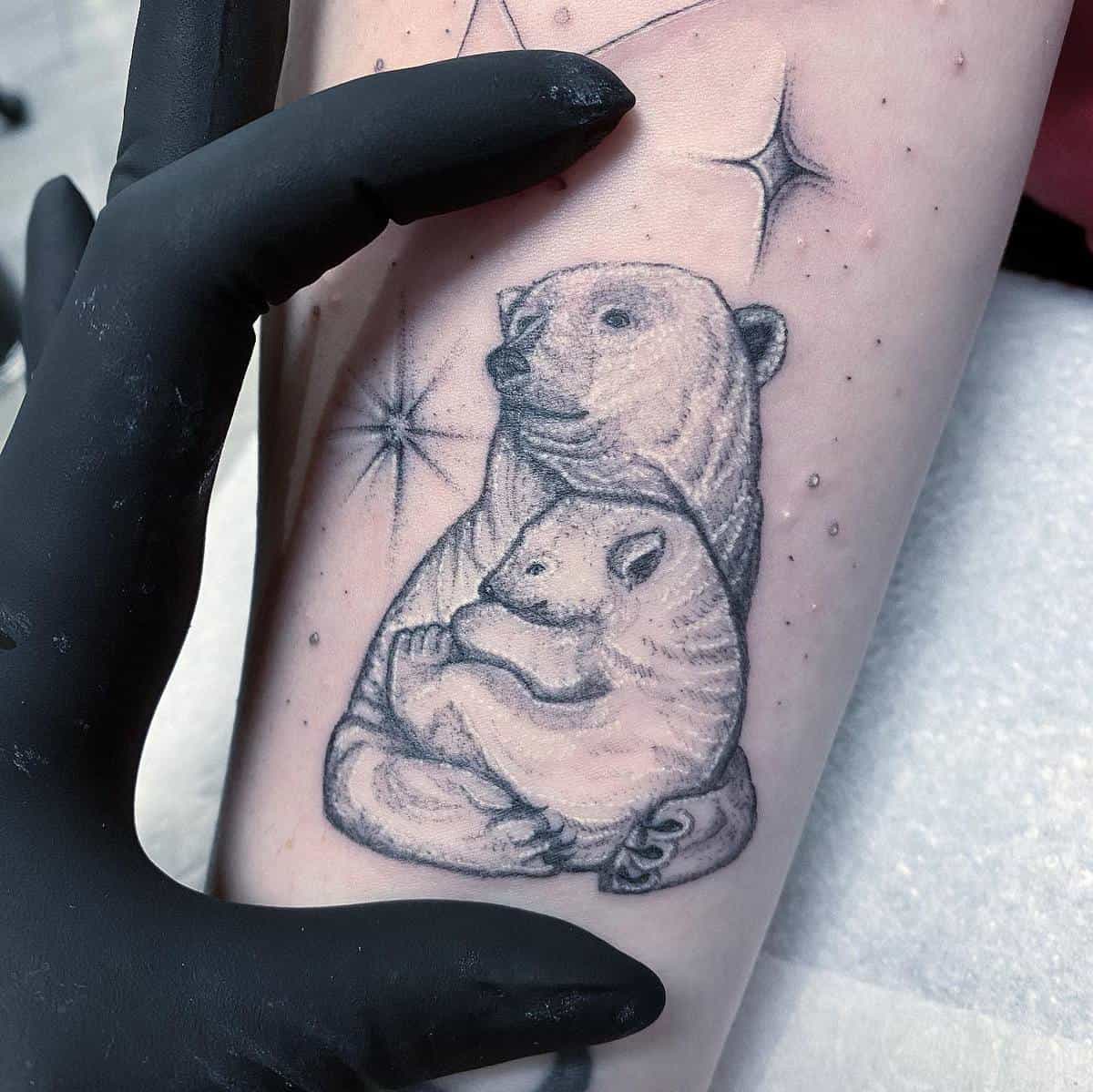 The polar bear is a complex creature, used in body art to embody the tenacity of spirit needed to survive a barren landscape alone.

The polar bear possesses a spiritual quality unmatched by nearly every creature in the tundra and beyond.

In recent years, the polar bear has also become a symbolic bear design representing the damage human beings have done to our planet. If you feel a deep connection to nature, there is no better way to show it than with one of the most high-profile (but unfortunate) mascots of climate change. 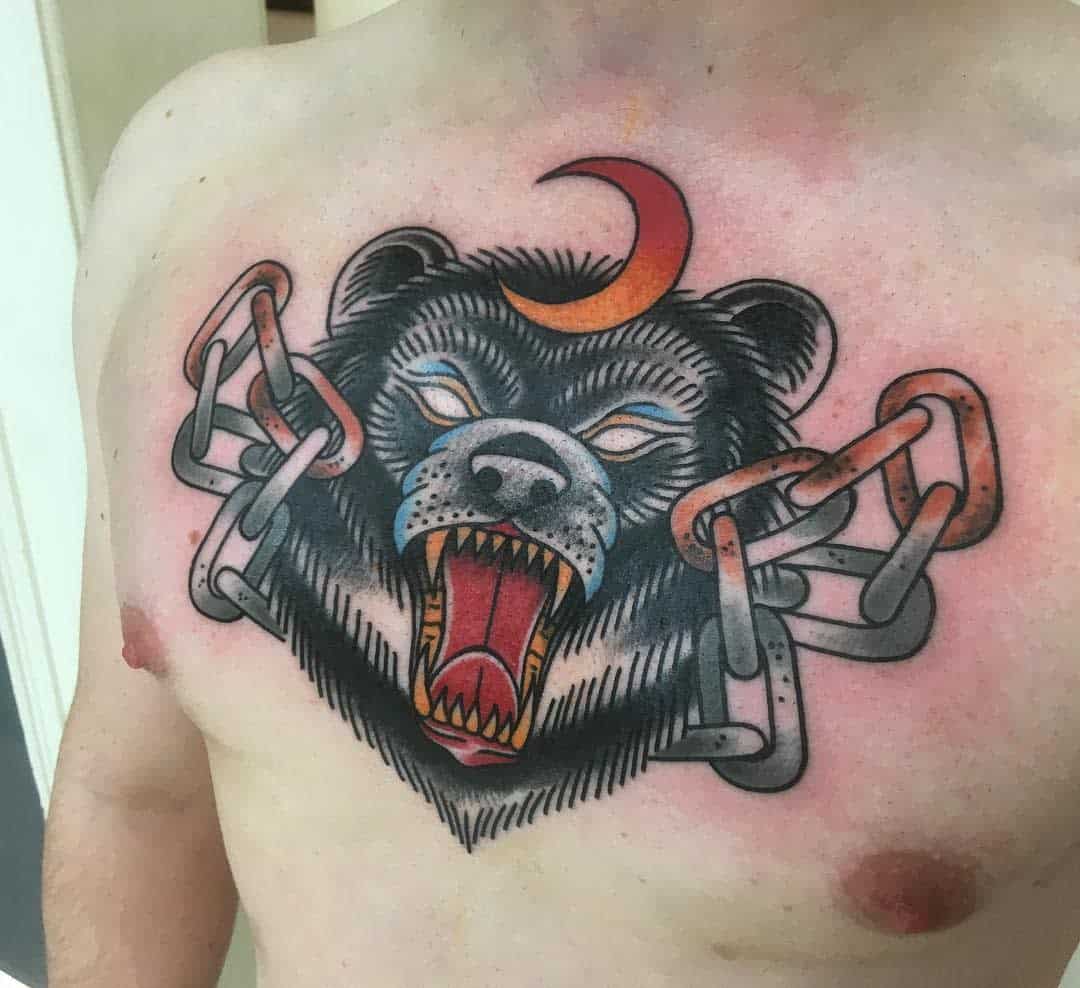 Traditional style tattoos have started to focus more on depictions of wild animals.

Bears are a particularly common subject, and they are frequently depicted in the middle of a ferocious roar or as a spirit animal.

They definitely look cool, but a traditional black bear tattoo does more than just show off your animalistic side. Tattoos of these creatures actually contain a lot of symbolism in traditional artwork.

The thick coat and wide teeth of a bear work well in the traditional style, and the contrast between dark fur and a red mouth is very striking. 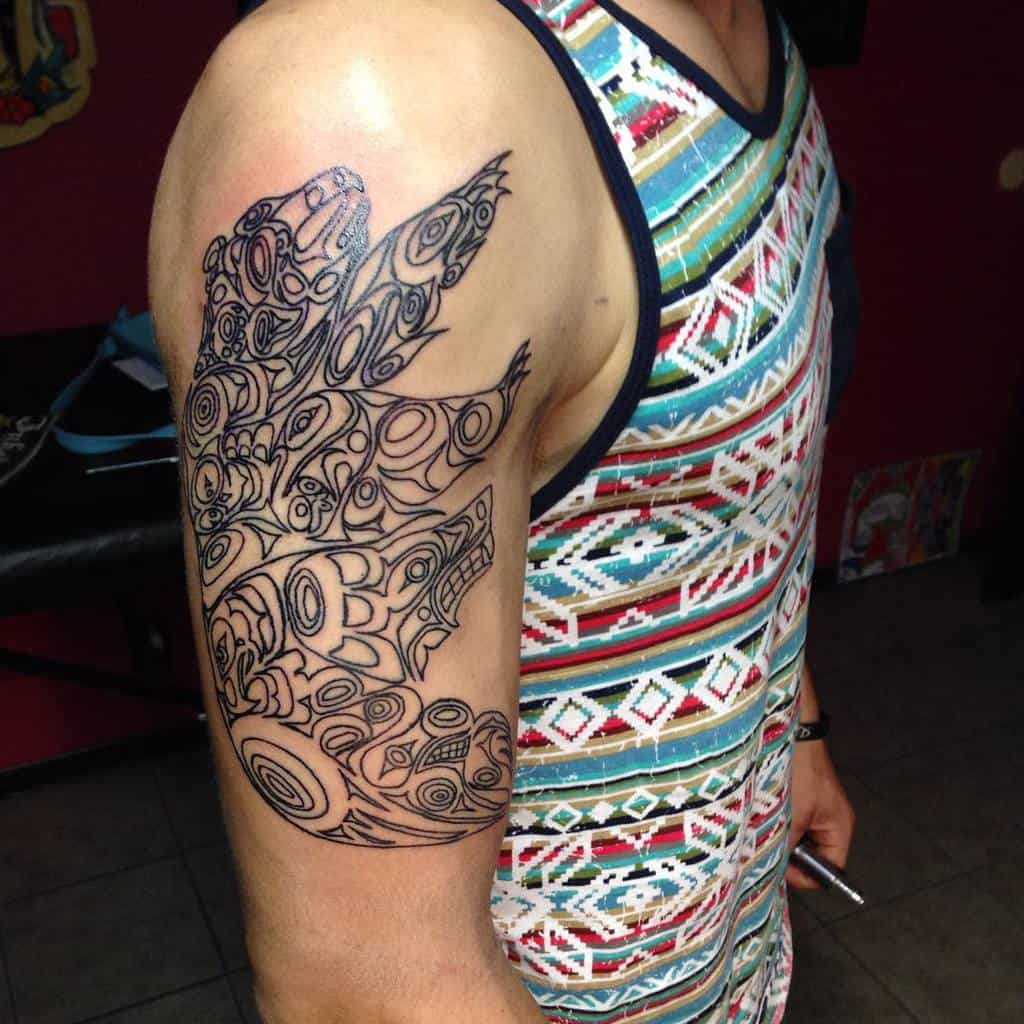 Since the bear is also a highly aloof creature that hibernates in solitude during winter, the geometric tattoo can be a way of expressing the bear‘s introverted nature.

The type and design of bear or bear paw you pick for your ink can also be a way of further customizing the meaning of your tattoo.

A geometric bear tattoo is a perfect way to encapsulate a “gentle giant” of nature through the sleek, vibrant linework, repetitive patterns, and use of color and shape to create further deep meaning. 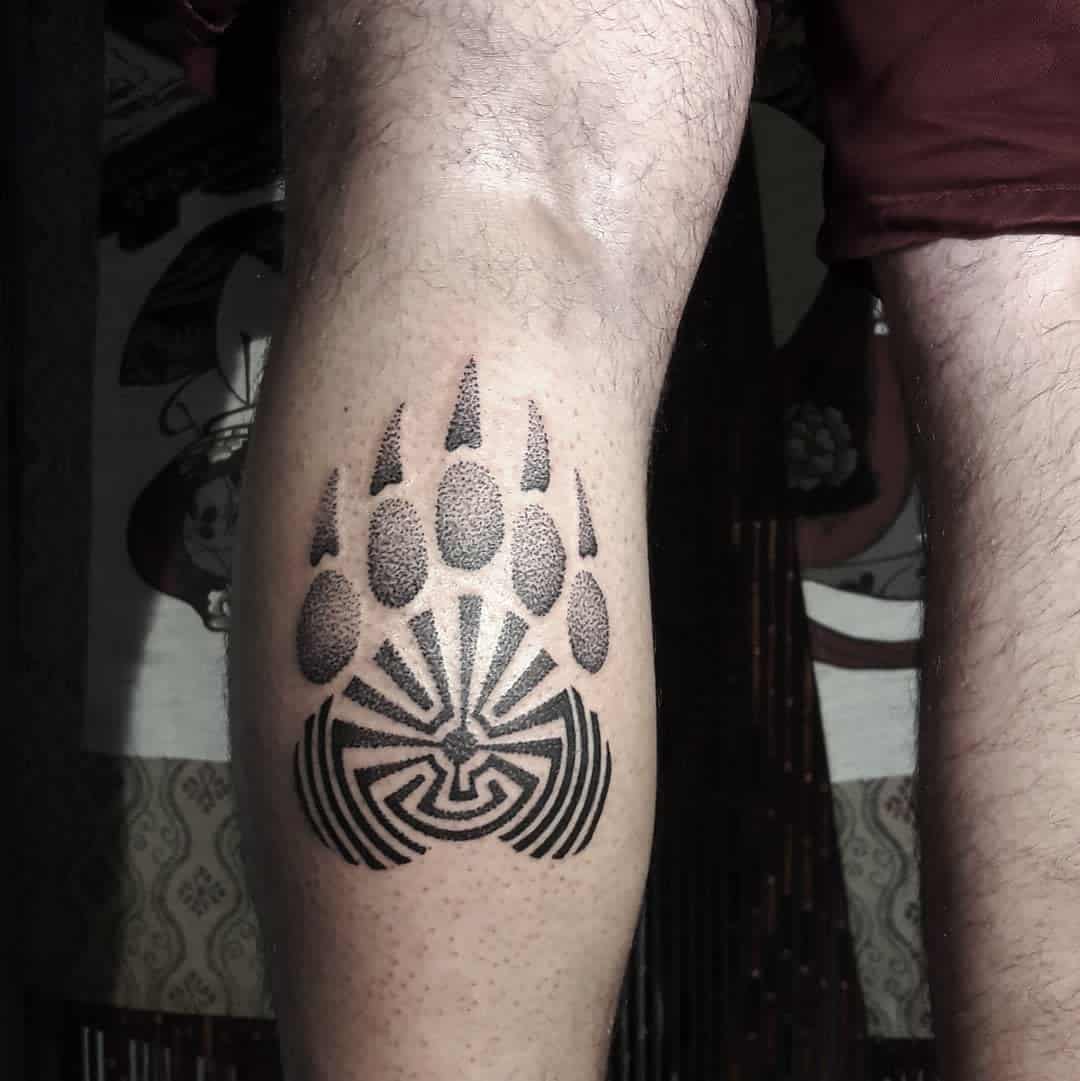 A bear paw tattoo is often a great contrast in theme to a larger scale, full bear tattoo design.

In modern tattooing, the bear paw is used to link personality traits and characteristics individuals share with bears, or to frame scenes of the mountains and forests where bears are found.

Bears paws are very popular tribal tattoo themes across many cultures worldwide, while they can also be a great design for use in American traditional and neo-traditional style tattoo art. 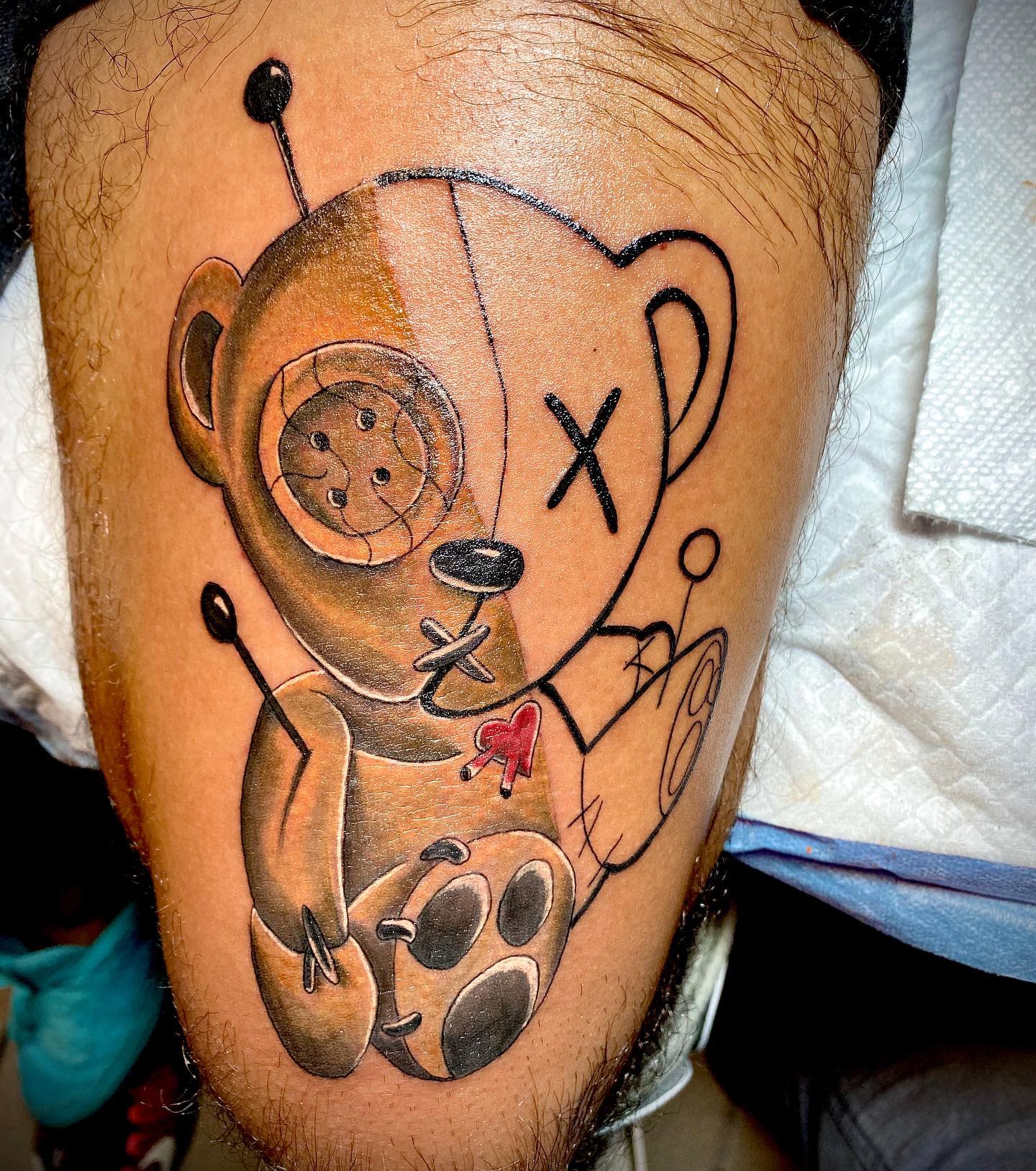 Battered bear tattoos represent how everyone goes through life with scrapes, bruises, and the stuffing knocked out of them sometimes, but keep going.

These kinds of tattoos are a great symbolic design for collectors who, much like the bears they grew up with, have come through life with a few scars but want to recognize the journey they’ve taken from kids to adults. 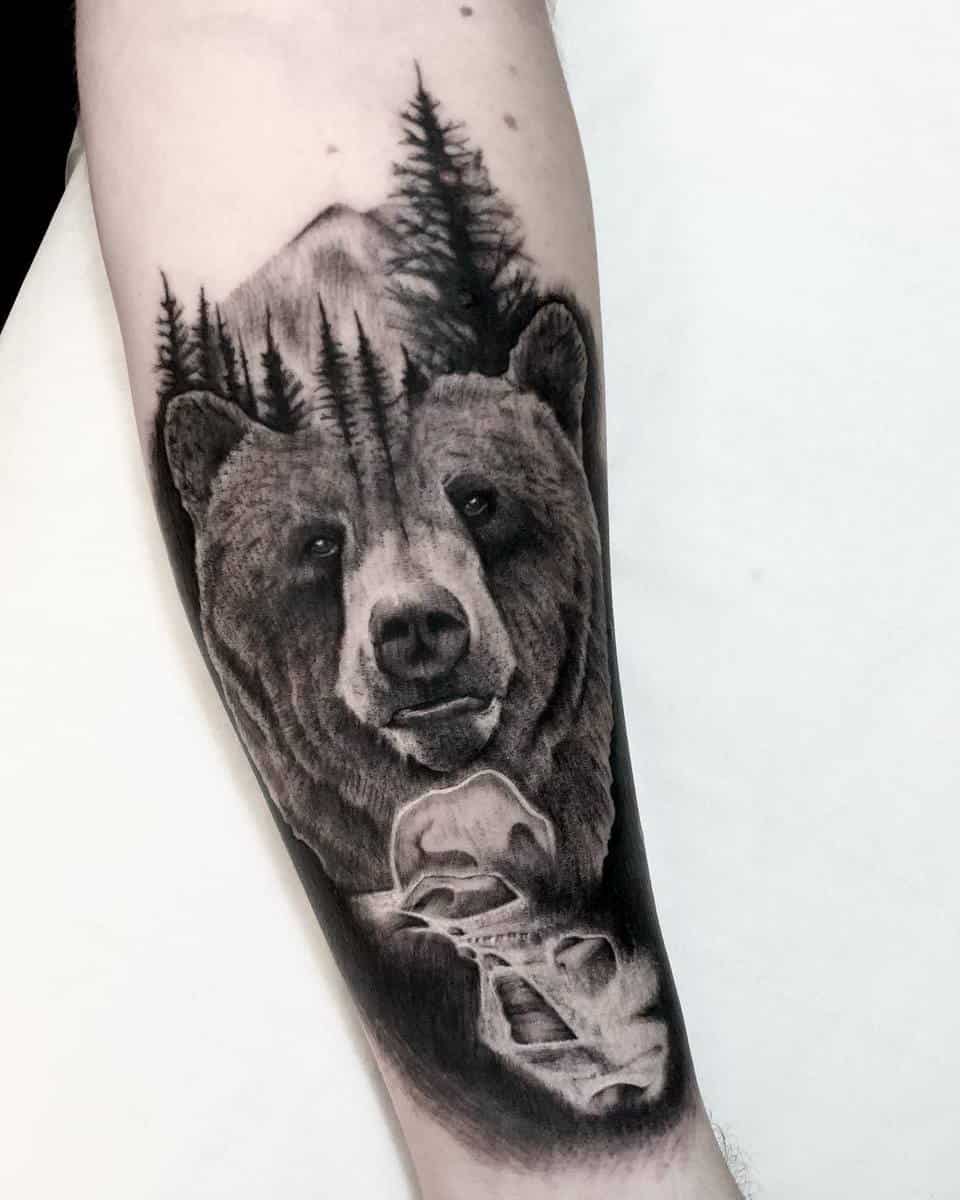 In its most realistic tattoo form, the bear is a creature to be marveled at – the mixture of realism created by technical delivery of fur, fang, face, and imposing bulk

Once hunted for both sport and vengeance, conservation efforts have taken great strides to educate and enlighten people about bears, which extends to realistic forest tattoo designs in which bears, wolves, and other wild animals feature.

Realistic tattoo design requires a talented tattoo artist that can manipulate both the central image of the bear – no matter the type – as well as its surroundings with technical assurance and skill with shadow, line, and shape. 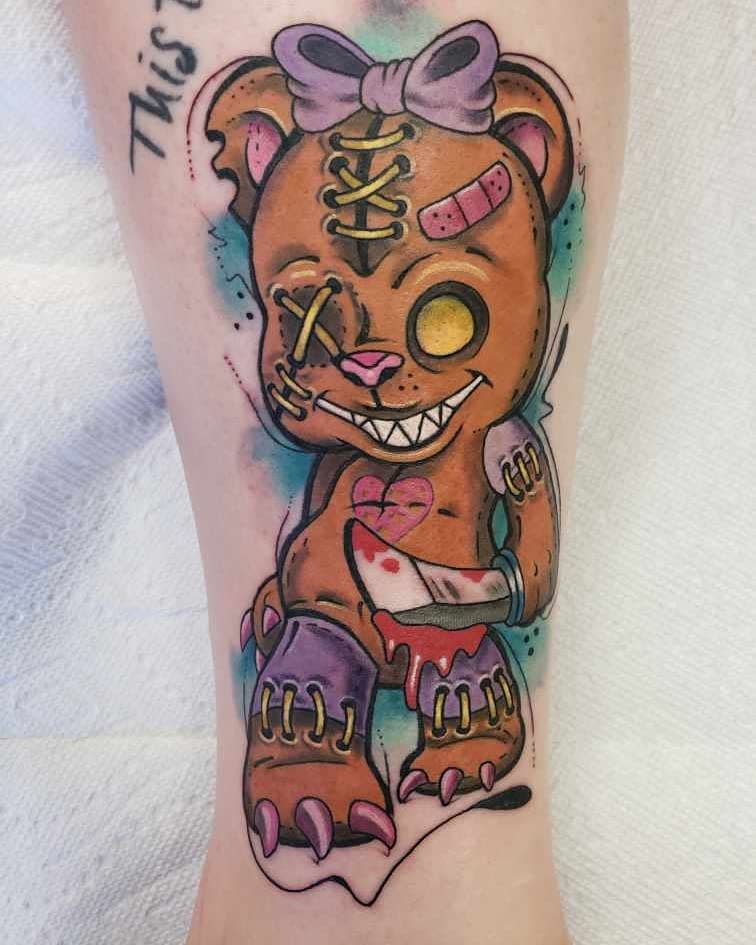 Though it honors an animal of ancient spiritual value, the neo-traditional bear tattoo is absolutely in the moment and of the moment style-wise.

Defined by a look and feel that could be lifted from any number of today’s on-trend illustrations and graphic novels, the neo-traditional grizzly bear tattoo design is anything but primitive or outdated.

If a more vivid and illustrative type of bear‘s likeness appeals to you, then you are surely a person with similar principles and strengths to really enjoy a neo-traditional piece of body art.

Different types of bears can create a huge range of possibilities in design themes and meaning.

You can choose a fierce and imposing bear tattoo, right down through to snuggly and fun teddy bears, with just a few shifts in your central concept.

The different styles of bear tattoo art can make for more layered, deeper, and interesting pieces that you can apply to your own idea for bringing to life in the future.