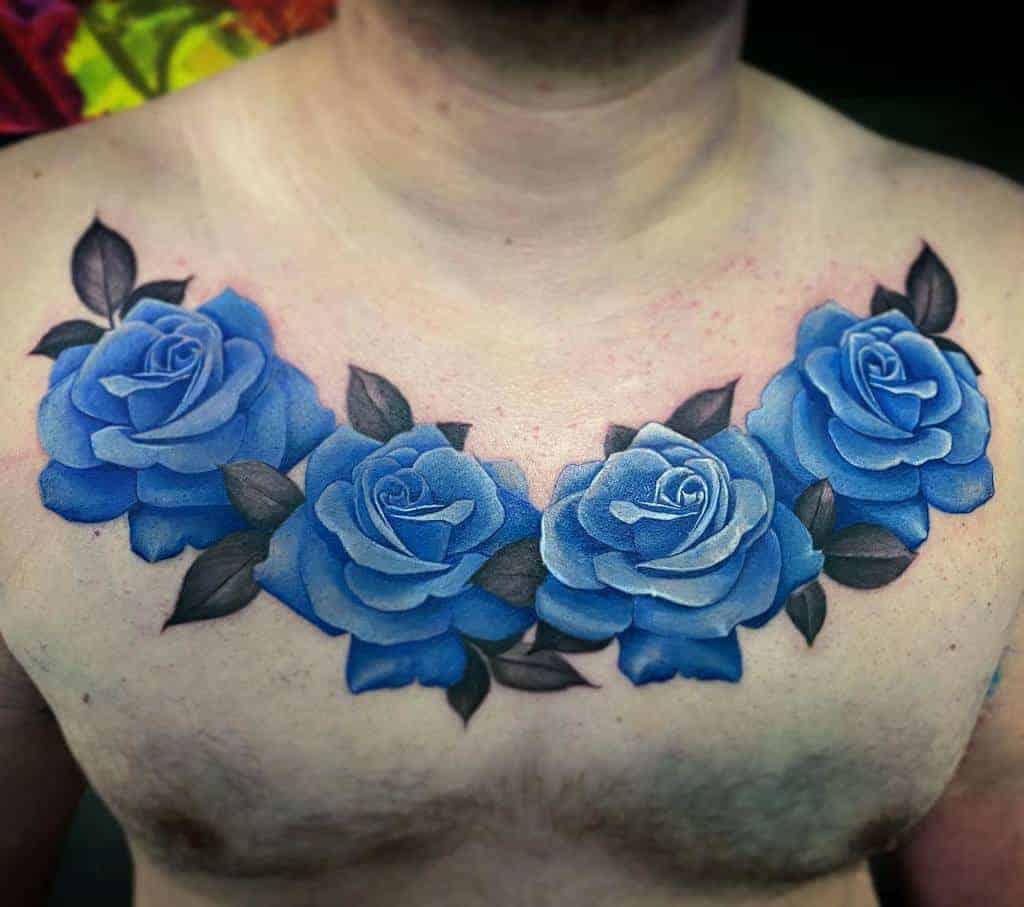 Blue Rose Tattoo Meaning – What Does a Blue Rose Symbolize?

The blue rose is featured in a range of awesome tattoo designs that are most often used to represent fantasy, mystery, and the impossible.

The mystical rose is not present in nature – like a red or yellow rose – but can be dyed blue or cultivated through a genetic modification that can be purchased from a florist or flower farm. They aren’t natural in real life but make for mesmerizing tattoo ideas.

The tattoo collector can add layers of meaning to their blue rose design through style choice, application technique, or secondary imagery that enhances and deepens the effect, while others choose the blue rose for purely aesthetic reasons.

The following story will examine blue rose tattoo meaning, some history, and the technical applications that add to its symbolism in flower tattoo art. 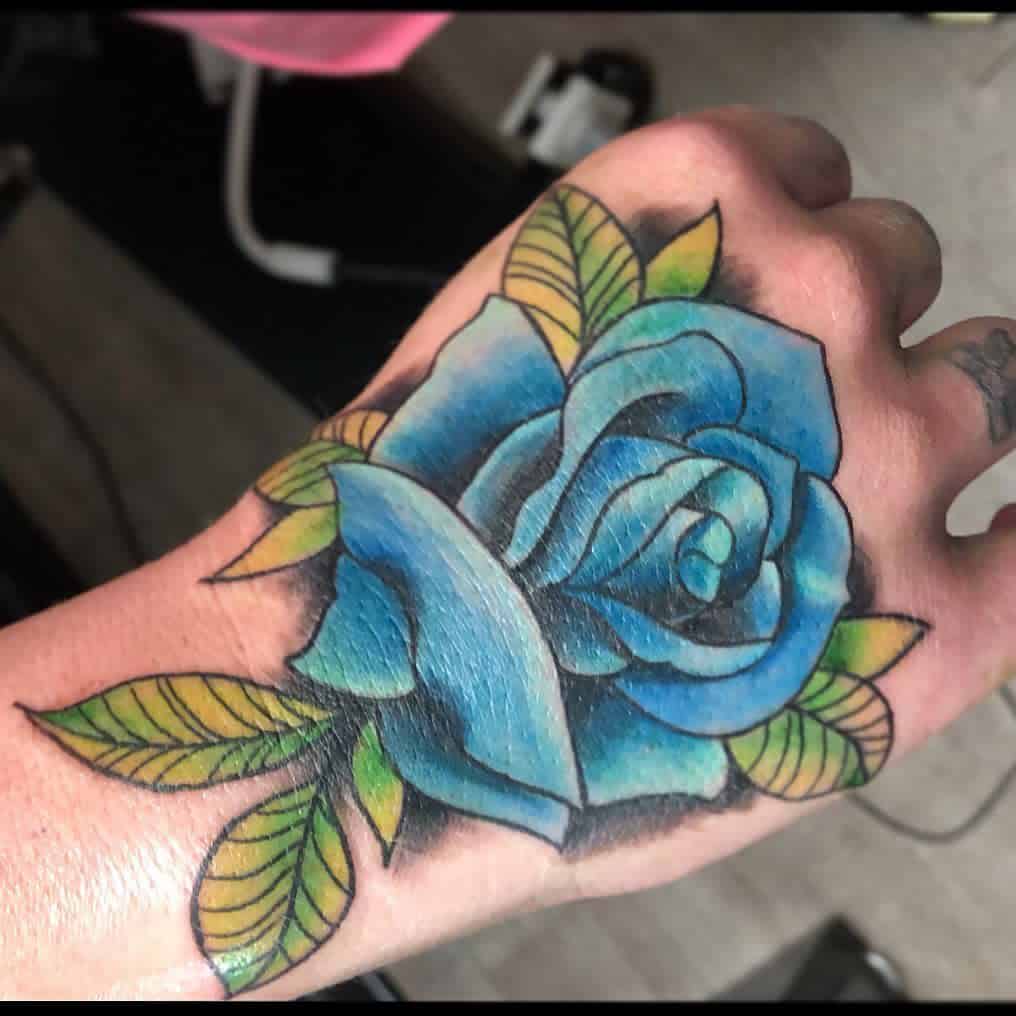 Blue rose tattoos are used mainly to symbolize mystery, the impossible, or the unattainable.

Because of their rarity, blue rose flower tattoo meanings also symbolize the unique, or depict the concept of fantasy.

Blue roses are not present in nature but can be dyed or cultivated through a genetic modification that can be purchased from a florist or flower farm.

It is because of this “unnatural” reason that the blue rose is treated as an “impossible flower,” which makes it a great choice for symbolizing the mysterious or unique.

2. The Blue Rose in Asian Folklore 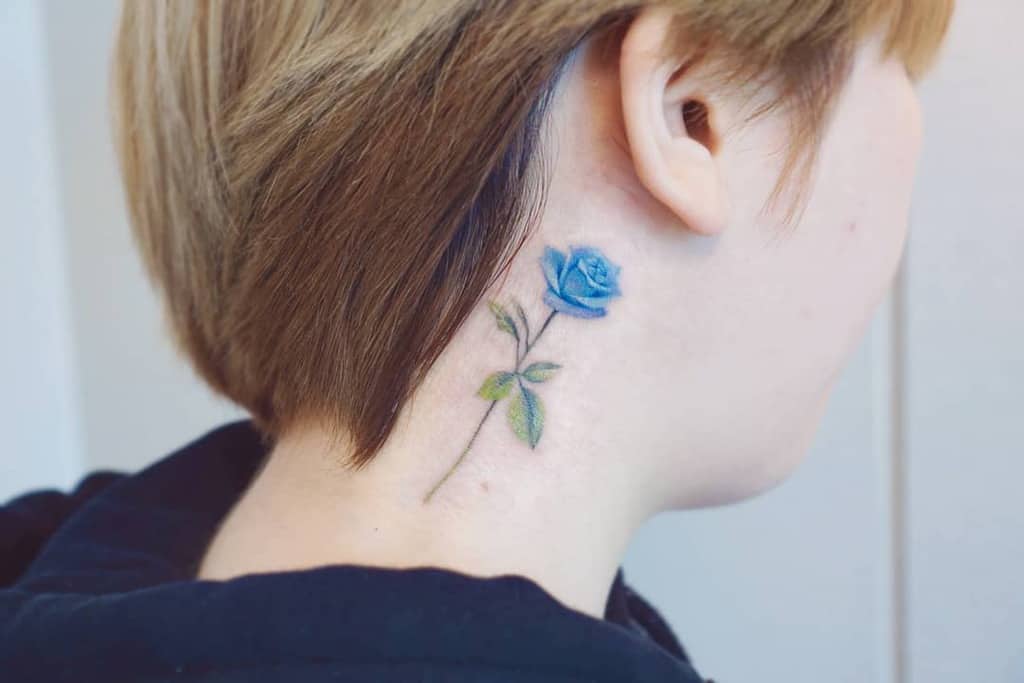 Blue roses are often given as wedding and milestone gifts and represent perfect, immortal love.

In China, there is a popular fairytale regarding the daughter of an Emperor who refused to marry. She set a condition that the man who could win her heart must produce a blue rose.

Many men tried and failed, unable to create a real blue rose. When she finally met a minstrel and fell in love; he couldn’t produce the impossible flower.

He did, however, produce a white rose, which made the princess happy. She declared the rose blue, they married, and the Emperor planted a “blue garden” full of white roses to symbolize the attainment of their impossible, immortal love. 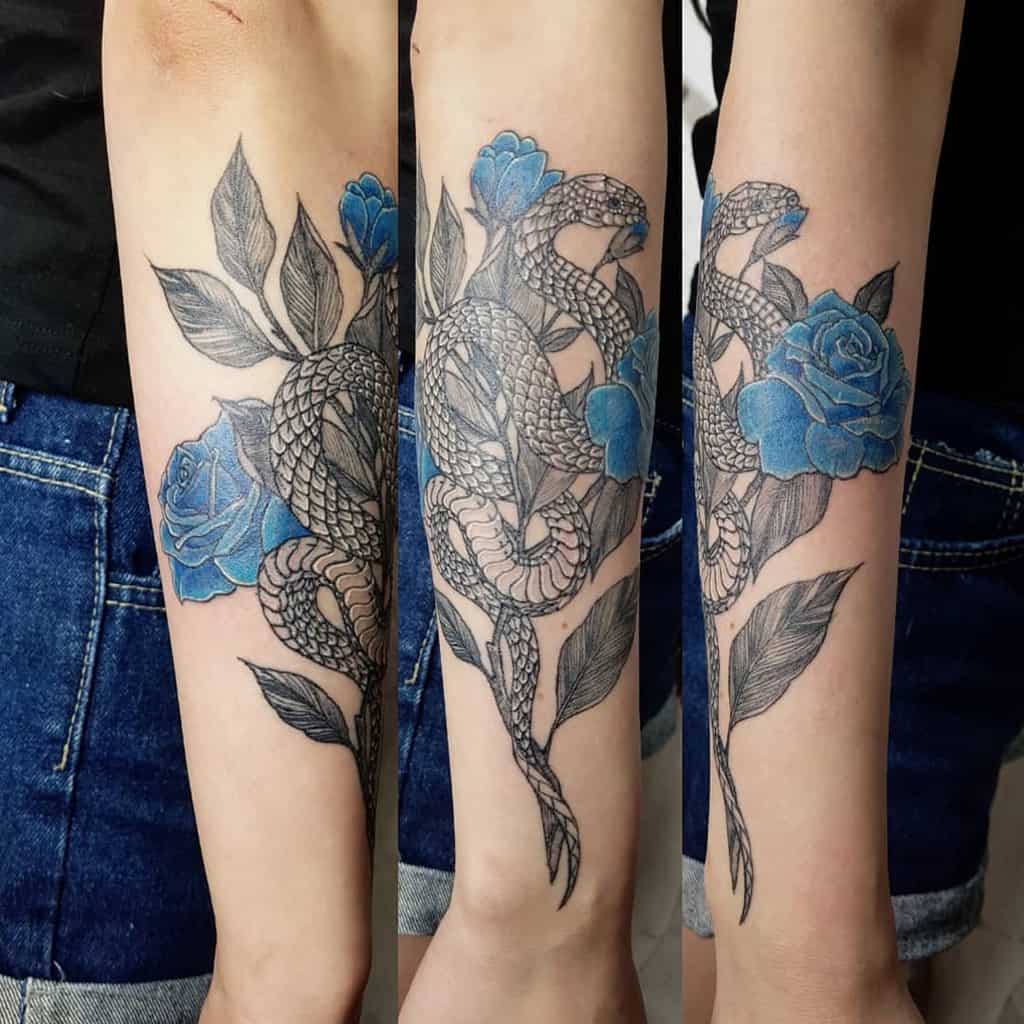 A blue rose tattoo is also popular as a secondary image, or as part of an overall theme in larger flower tattoos, most often as a striking contrast to traditional black and gray ink.

As a symbol of love, passion, and possibility, the rose works either as a complement or a contrasting symbol as a single rose or in small tattoos.

They are popular in Christian tattoo ideas to complement the cross or rosary and are also used in conjunction with religious-related benedictions and affirmations.

Popular contrasting themes include skulls, daggers, and tigers to juxtapose the concept of beauty and love with death, power, and ferocity.

Blue Rose ink also pops up in examples such as mandala and dream catcher tattoos, or even animal, butterfly, and snake tattoo depictions. 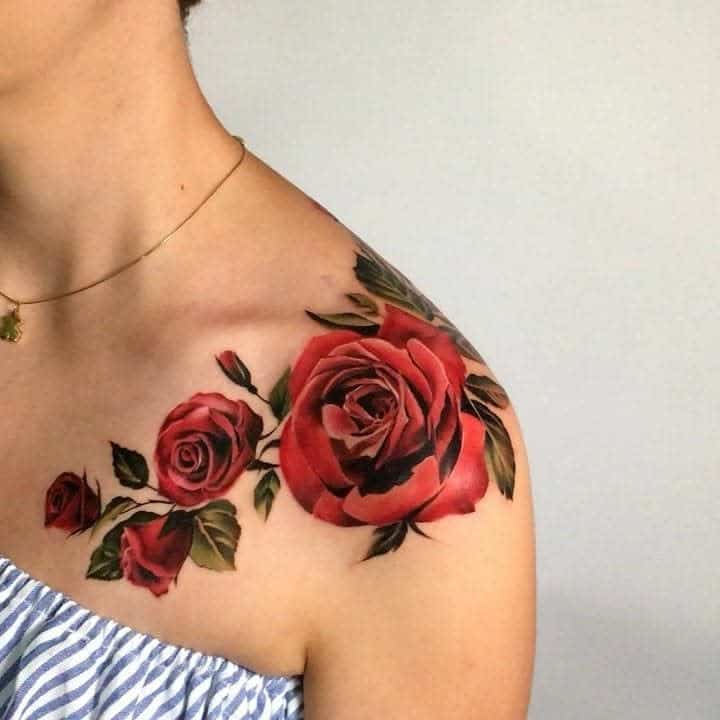 The rose is an almost universal symbol for true love in tattoo design – it’s one of the most enduring and highly visible motifs in body art.

Some collectors who get a blue rose tattoo link their design to this meaning, with the color to represent either an aesthetic choice or a deeper, more mysterious version of love.

It’s also a symbol of strength, courage, and nobility, or a contrasting concept used to juxtapose themes such as light and dark, or good and evil.

Not only is the rose popular as a standalone design – either as a small rose tattoo or larger depiction – it’s also versatile enough to be incorporated into a wide assortment of other application ideas in tattoo culture. 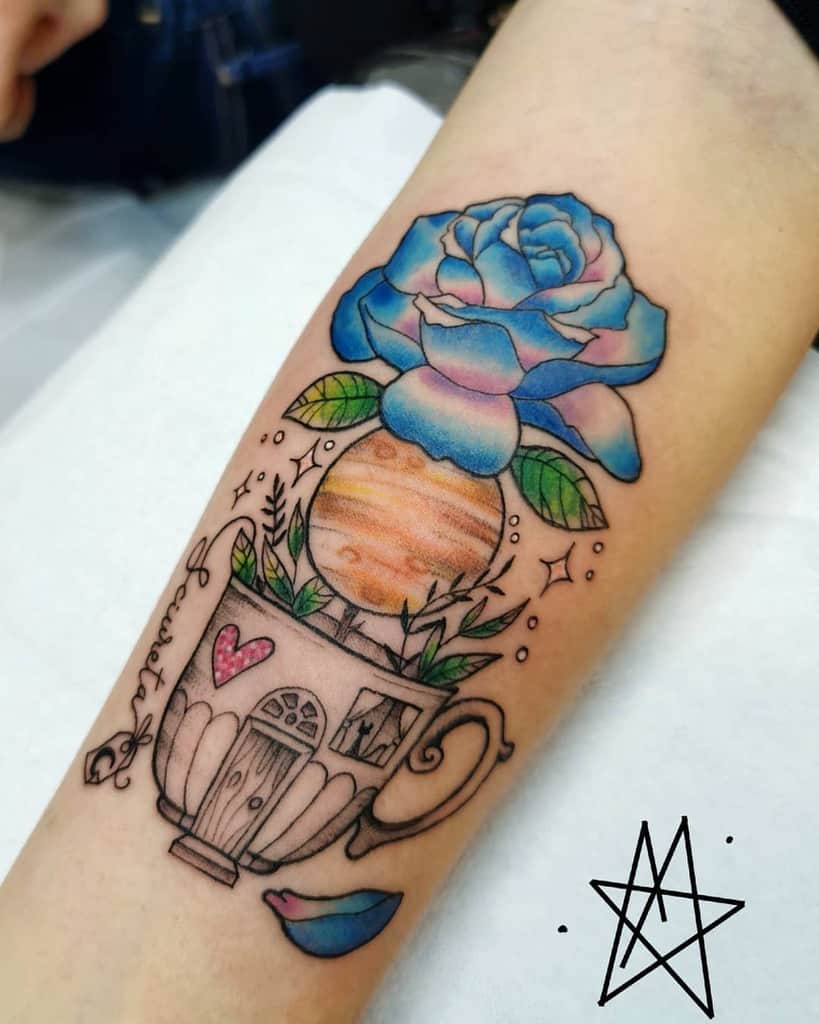 A design style that’s particularly popular with modern collectors, the neo-traditional blue rose tattoo allows you to connect an old school rose theme and create it in a bright and breathtaking visual fashion.

While American traditional style is built with a limited color palette and distinct features, the neo-traditional approach can add that element of fantasy and mystery that many subjects look for in a design style of this type.

You don’t just have to rely on a black rose or red ink, you can incorporate bright yellow or pink roses into the design, or go wild all together with a rainbow rose. 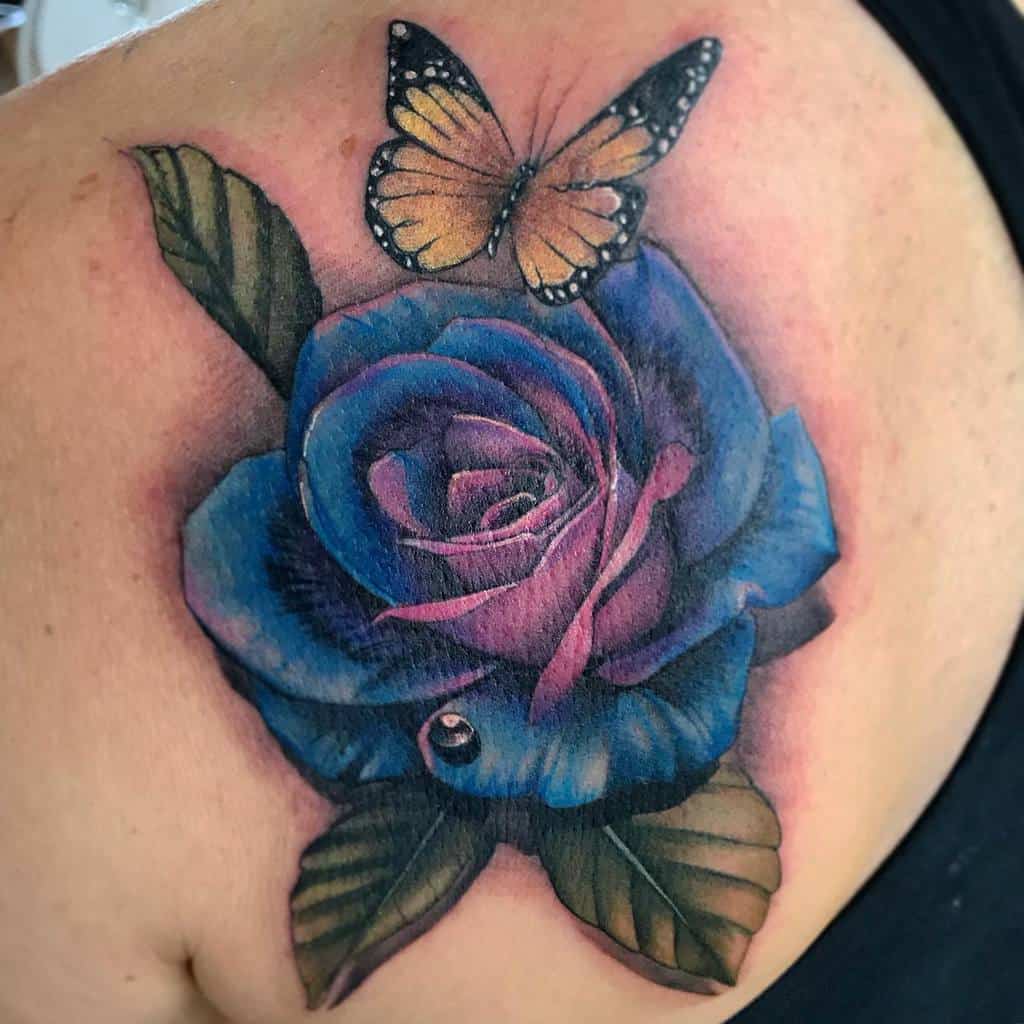 A realistic blue rose tattoo combines mystique and fantasy with a fierce fondness of nature’s finest offering. The layered petals also garner immense abilities to customize, particularly in regard to shading.

They also allow a tattoo artist or collector to demonstrate that the beauty of a blue rose is real, despite not being a naturally occurring flower.

7. The Black and Blue Aesthetic 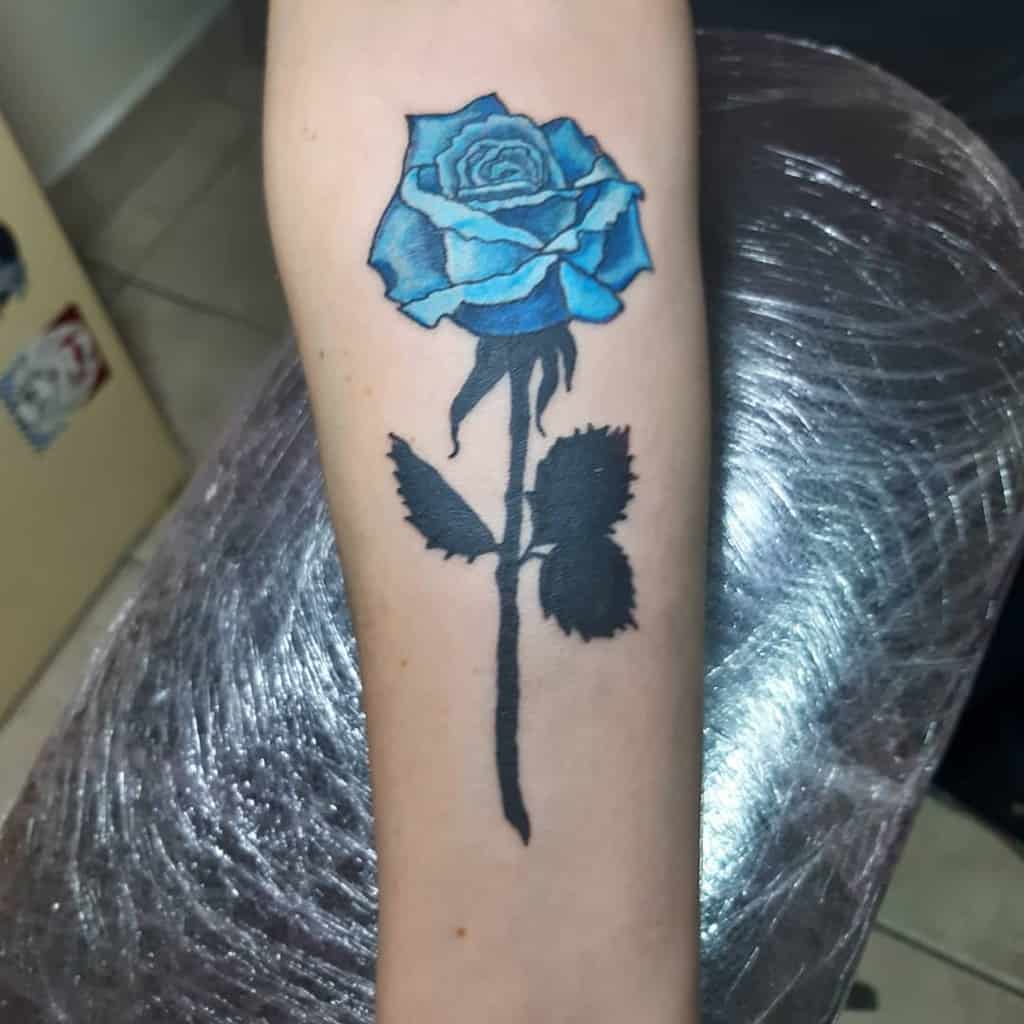 For some collectors, the blue rose creates a color contrast with black and gray ink.

For those collectors who are looking to move away from the more prevalent red or pure black ink, it creates a nice color contrast and emphasizes the shading and shape elements of the classic technique.