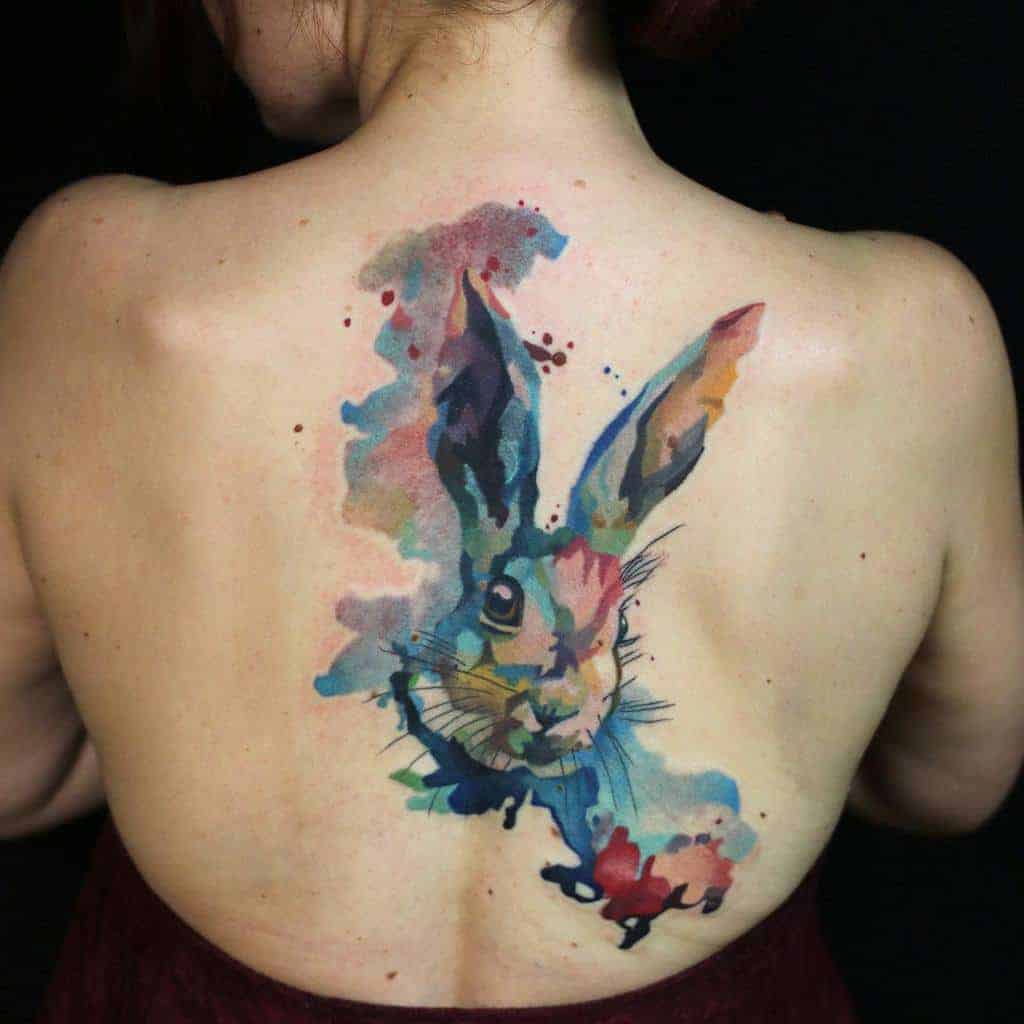 Rabbit tattoos are often used as good luck charms, totems of wealth and abundance, as well as commemorations to the wearer’s love of the natural world.

Thanks to its global distribution, a rabbit tattoo has symbolic meaning linked to fertility, physical prowess, and the manifestation of the divine in nature.

In many traditional cultures, from Native American tribes through to Eastern mythology, rabbits are considered a spirit animal of good luck, especially if one crosses your path.

Another popular bunny is a white rabbit tattoo design paying homage to the iconic white rabbit from Lewis Carroll’s Alice in Wonderland. For others, a cute bunny tattoo displays their sense of humor and love of fun.

The following story will examine rabbit tattoo meaning while also exploring a number of different style and application choices that build symbolic meaning in your central tattoo idea. 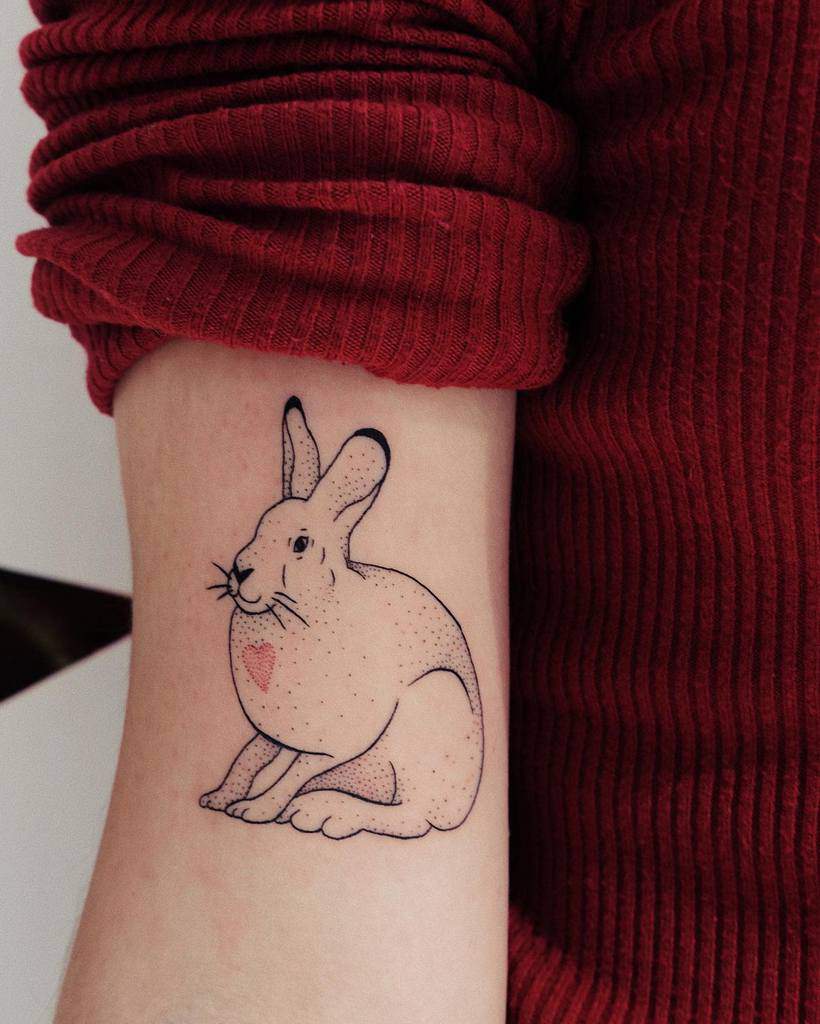 Rabbit tattoo design ideas are often used to depict good luck, and not just as a lucky rabbit’s foot trinket. The humble bunny is often a motif linked to positivity, wealth, and abundance as well as commemorations to the wearer’s love of the natural world.

From Native American tribes through to Eastern mythology, if a rabbit crosses your path it’s a forecast of good fortune. This rabbit symbol provides an impetus for your bunny tattoo being a lucky benediction you carry with you everywhere. 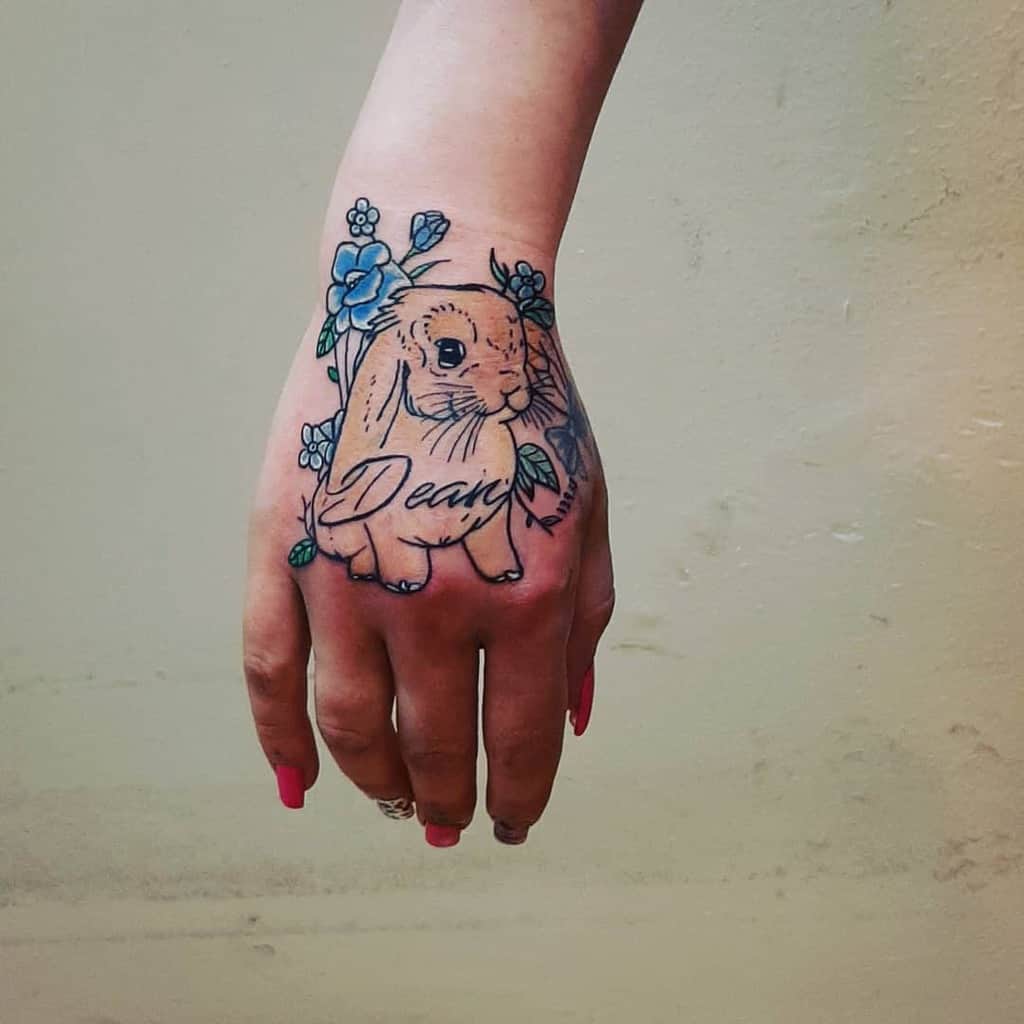 The other most distinct symbol for a rabbit tattoo design is a cute and cuddly creature famed for its energy (and for the ability to reproduce).

A bunny tattoo idea is versatile across style and application techniques, even when the cute little creature is juxtaposed with darker themes, abstract applications, or melded into designs where your tattoo artist focuses on specific behavioral or physical traits in building ink with deeper meaning.

Bunny tattoos are also a pop culture symbol. Collectors opt for different recognizable designs, such as Roger Rabbit, the Easter Bunny, Peter Rabbit, and the Playboy bunny, that have more aesthetic meaning than deep symbolism.

3. The Jackalope within Rabbit Meaning 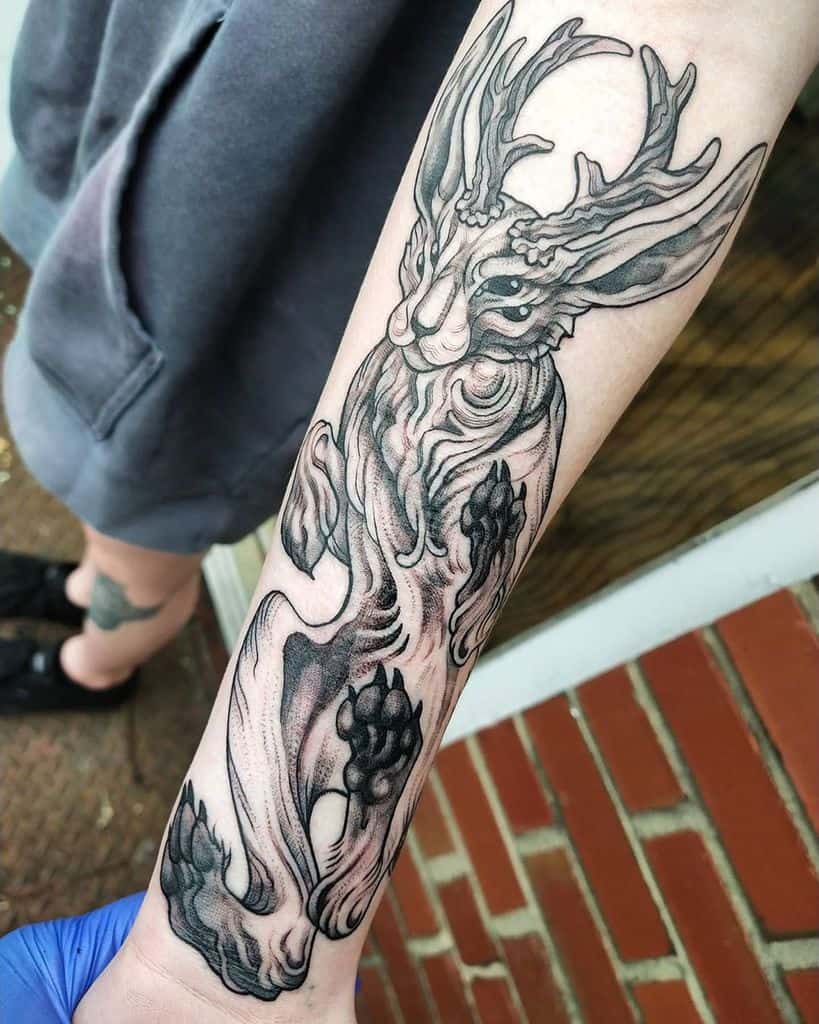 The jackalope is popular at the tattoo shop for both custom or flash style rabbit tattoo ideas and is useful for the collector looking towards animal tattoos with a darker or more absurdist aspect.

The mythical jackalope – a cross between a rabbit and a hare with horns – has been entertaining and confounding hunters for decades, so it is little surprise that people choose this fantastic creature as inspiration for their rabbit tattoos.

Whether it’s a cute and playful jackalope or a more foreboding, black and gray custodian of the forest, a jackalope tattoo is a great choice for those with more eclectic sensibilities. 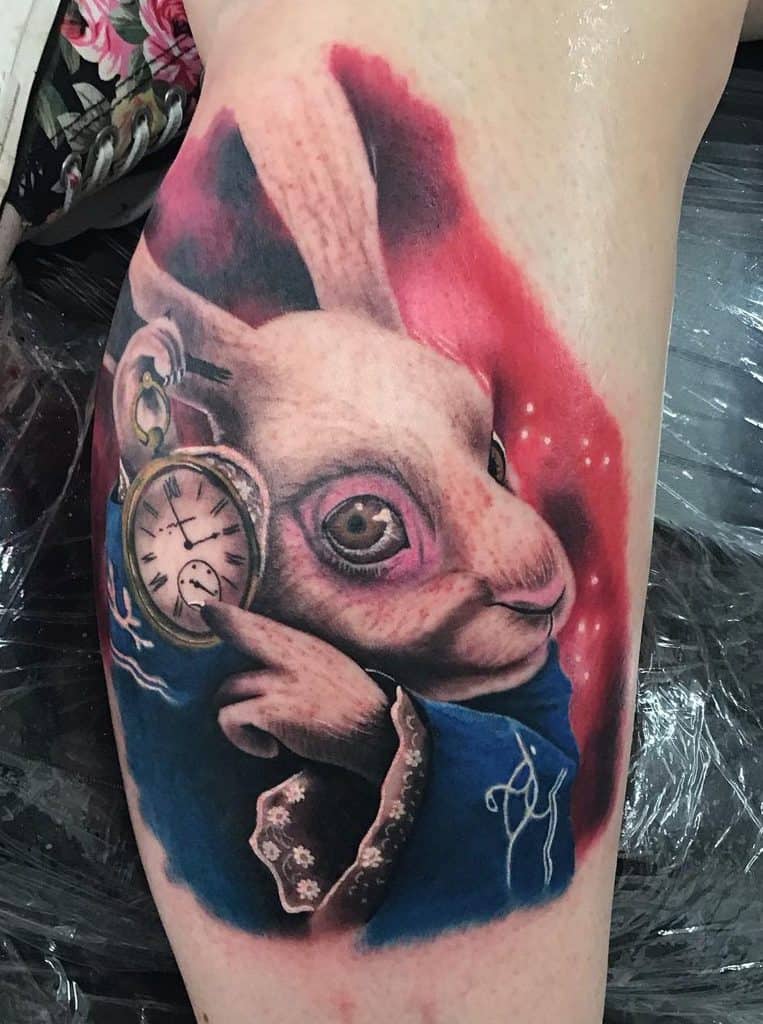 Usually depicted in a waistcoat with a pocket watch and constantly running late, the White Rabbit is an instantly recognizable character that makes great subject matter for Alice in Wonderland tattoo designs, whether it’s the classic illustrations from Lewis Carrol’s novel or later Disney or Tim Burton adaptations.

The White Rabbit is the first strange character that Alice encounters, and a common design choice for Alice in Wonderland fans that want a permanent reminder of the unique fairy tale (I have one old school black and gray rabbit, and also a Mad Hatter).

The new school White Rabbit tattoo designs generally use a vibrant color palette and some wild imagery to recreate the time-strapped bunny, while the Lewis Carrol and Disney options combine for more muted color schemes and classical black and gray ideas. 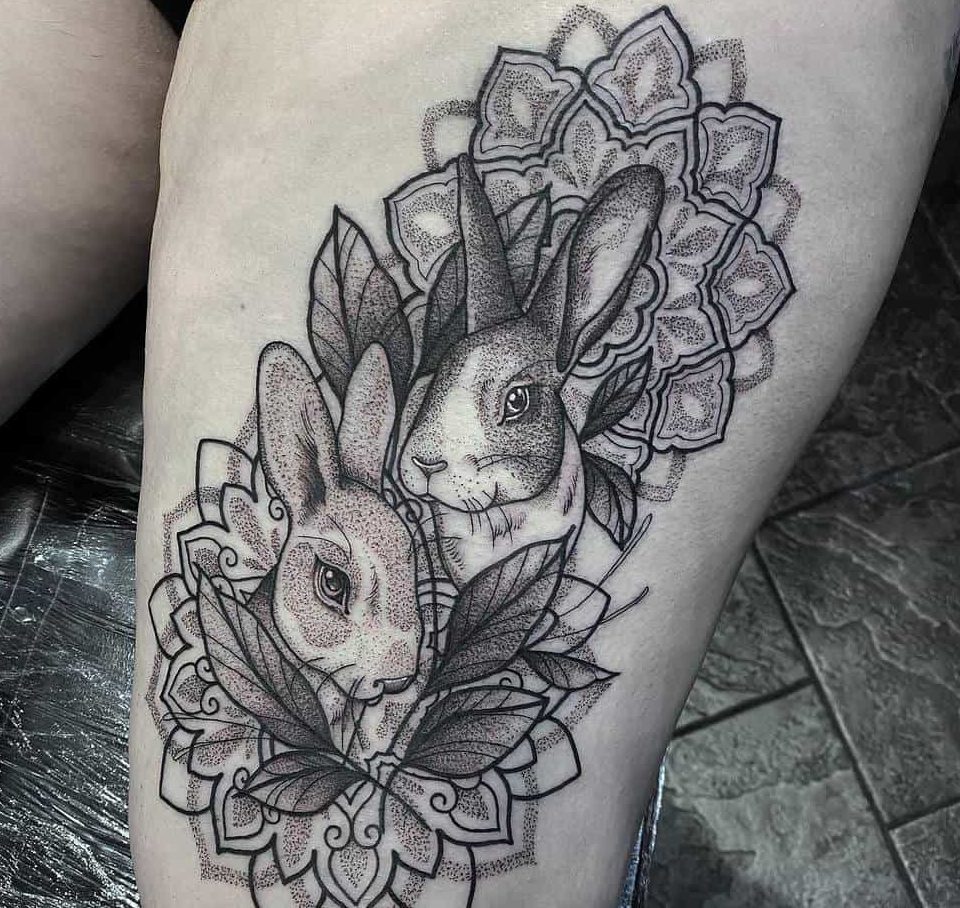 While it is commonly associated with photo-realistic designs and the complex shading typified in Chicano tattooing, black and gray ink is perfectly suited to a variety of tattoo styles and approaches to bringing your bunny to life.

Whether it is a long-legged great hare bounding across the skin, an elaborate geometric tattoo of contrasting lines and shapes, or a realistic cute bunny tattoo, black and gray is a great choice for rabbit design ideas.

Other tattoo collectors like to use a denser, darker style of ink known as blackwork. Fully saturated black can be used to increase contrast and make for exciting black rabbit pieces, or something solid and simple like a Playboy bunny tattoo. 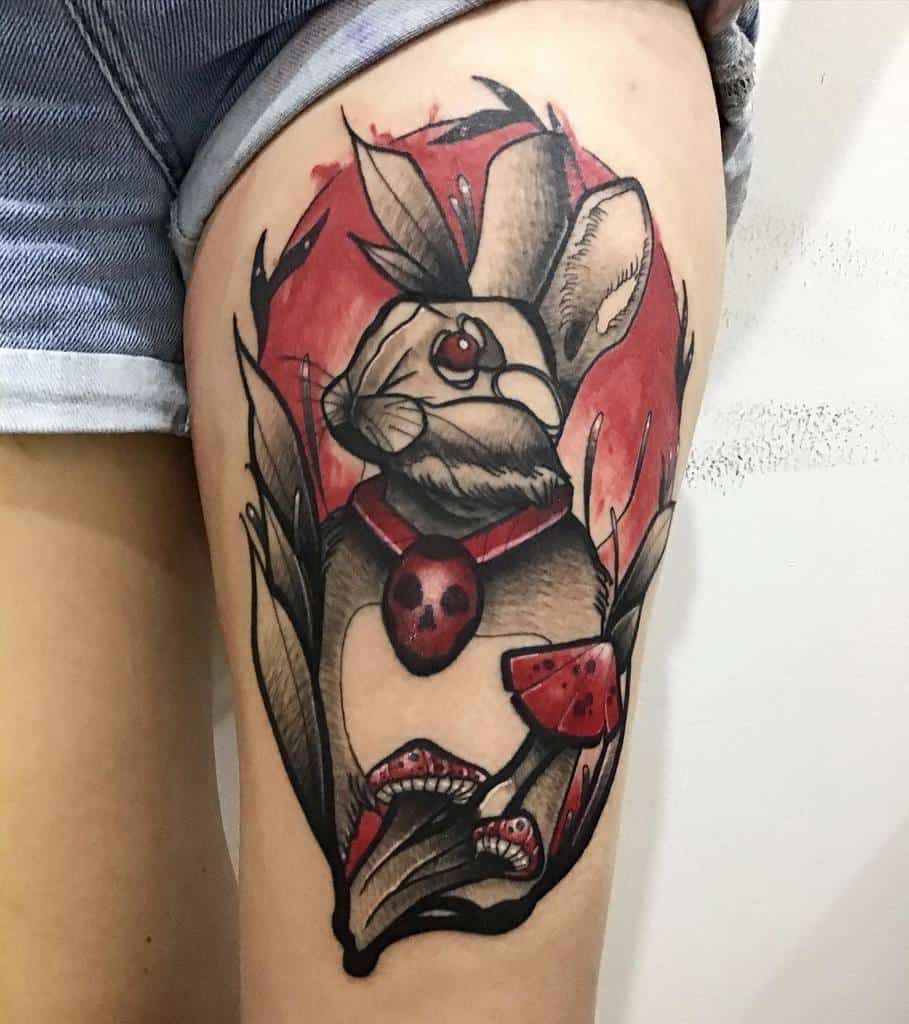 While a multi-colored bunny tattoo or funky rabbit’s ear probably wouldn’t be a common concept in a traditional old school piece, it is a great choice for a neo-traditional rabbit design. 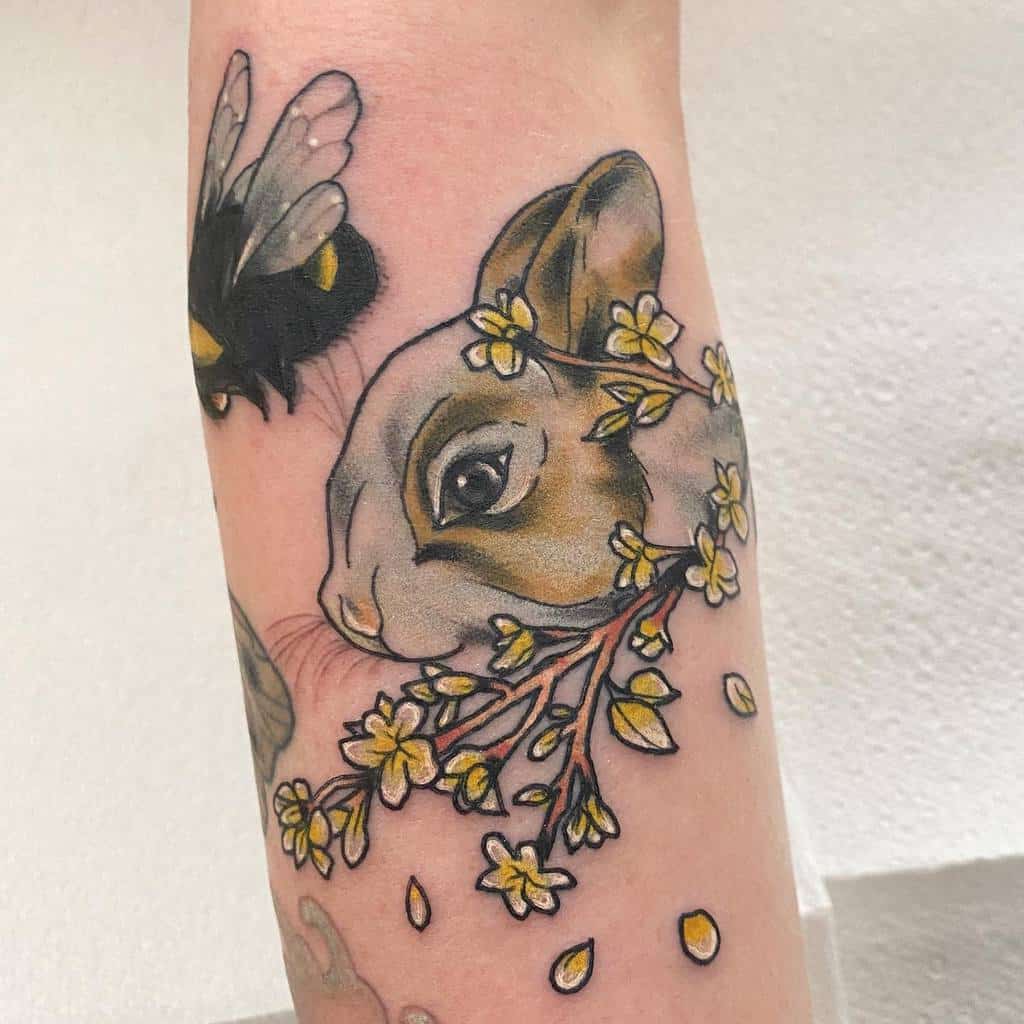 A rabbit tattoo is often used to commemorate the wearer’s love of nature and the outdoors and flowers are a great addition to almost any rabbit design.

There are a variety of rabbit designs that can benefit from flowers and they are more diverse than one might guess.

The classic Disney rabbit depiction is there, but more unique designs such as shadow puppet pieces and colorful but realistic bunny and flower tattoos create fantastic custom body art. 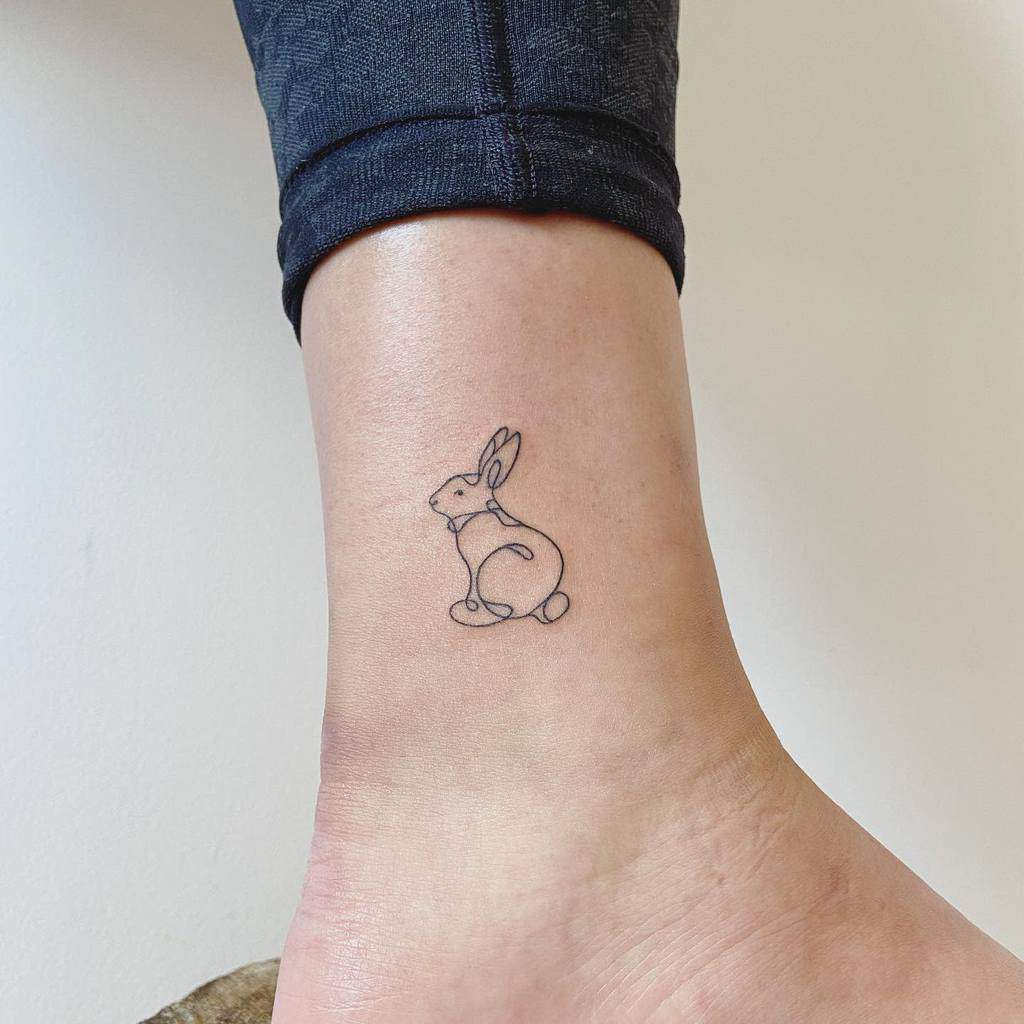 Small rabbit tattoo ideas are a great choice for anyone who wants to add a bit of ink in just the right place, without dedicating an entire limb to permanent body art.

Not everyone wants big, bold designs that take up large swaths of skin. In fact, many people prefer their tattoos to be subtle accessories, not their entire look.

With so many more artists specializing in the method of delivery, everything from a classic Playboy bunny tattoo to a stylized linework piece can be used for small bunny tattoos.