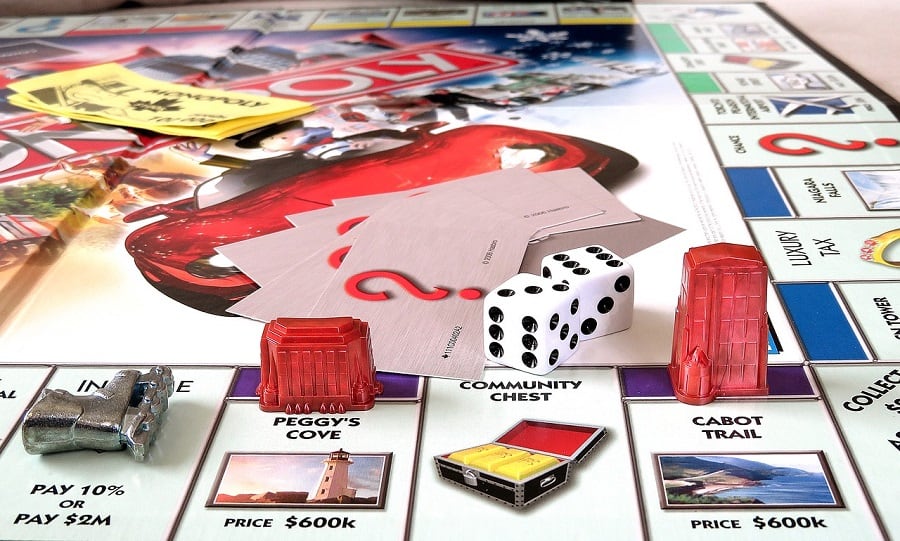 Staying mostly indoors is the new norm, whether that is something you choose to do willingly or forced to do because of prevailing circumstances beyond your control. But turning into a couch potato is definitely not the best use of your time.

Apart from working out at home and redecorating, you can kill a few hours with interesting adult board games. But not just any board game would do. Truth is everyone has different interests, so there’s no one board game that works for every adult.

However, these 15 adult board games are among the best you can find anywhere. Grab one or more of these games, gather friends and family, and get ready to have some fun with a party game! 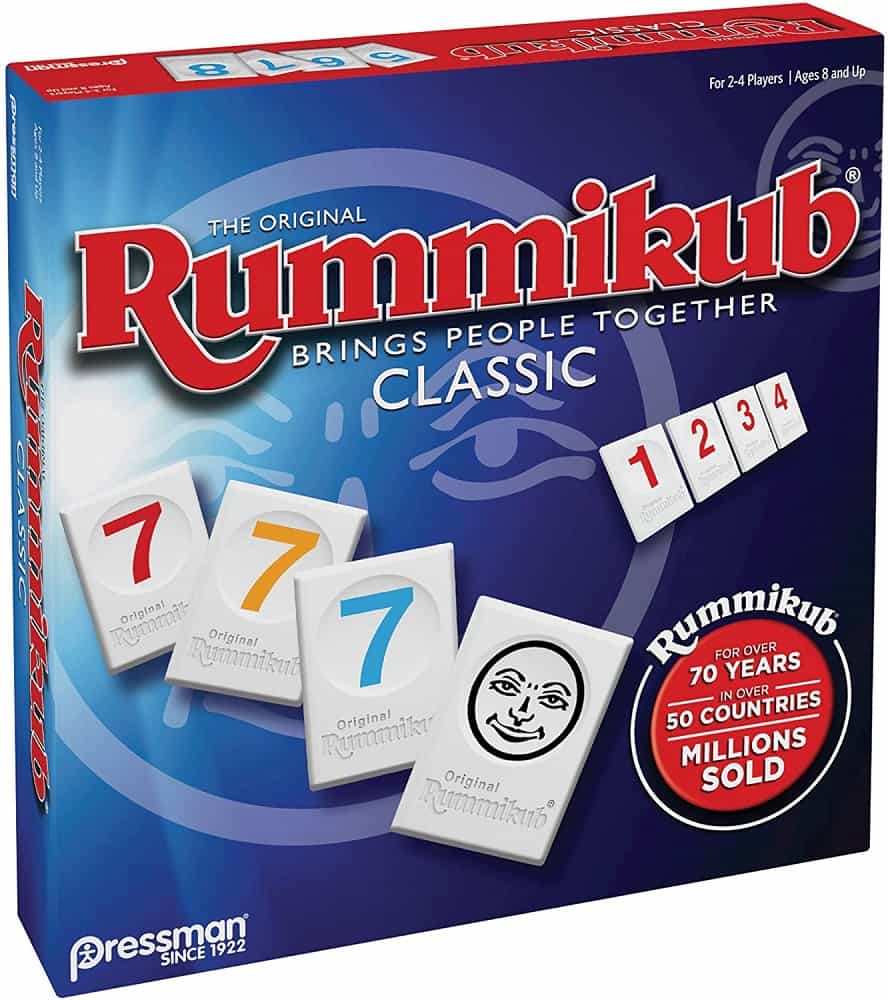 Rummikub is a highly entertaining adult board game that isn’t only fun to play but also reinforces important skills such as planning, sequencing, pattern recognition, and STEM skills.

The entire family can enjoy Rummikub regardless of age. This classic board game is one of the best ways to eliminate the use of modern gadgets (temporarily) and bring the family together without getting bored.

The fast-paced game is easy to learn, and it is very different during each play, making it new and interesting every time. Each player strategically places numbered tiles in runs. As tiles are added or adjusted, the board changes. The first player to place every tile in their rack wins.

Rummikub is one of the world’s most-play and best-selling board games, with over 55 million units sold! It has over 10k reviews on Amazon with an impressive 4.8 out of 5-stars rating.

2. Catan The Board Game 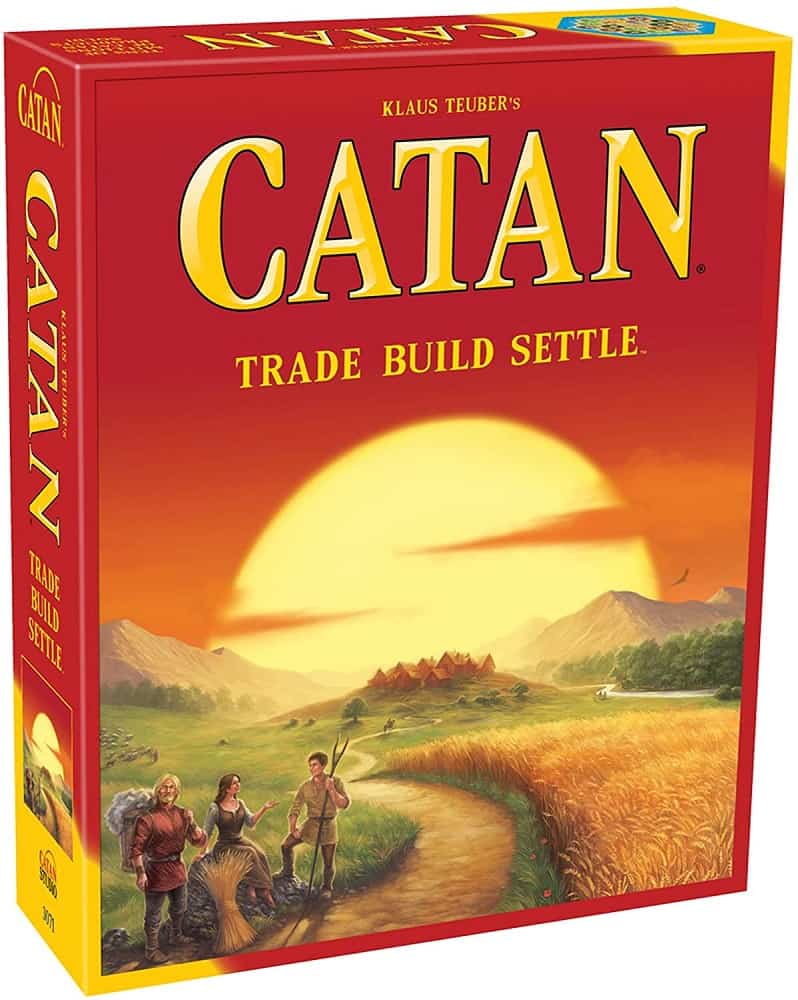 Take your tactical, strategy, and trading skills to the next level in this board game, where settlers in the new and rich Catan civilization try to outmaneuver each other. Cunning development, clever trading, and a good dose of luck are needed to win the game.

The game-plan is pretty straightforward; collect resource cards such as lumber, stone, straw, brick, and sheep to expand your territory and get points. You can also trade resources with other players and accumulate points. The first player to reach 10 points wins.

Catan is a multi-award winning and incredibly popular board game with well over 11k reviews and 4.8 out of 5-star rating on Amazon alone.

One more thing, you’re probably going to get addicted to Catan, so be warned.

Number of Players: 3 to 4 players (requires an extension for 5 to 6 players)
Average Game Duration: 60 minutes 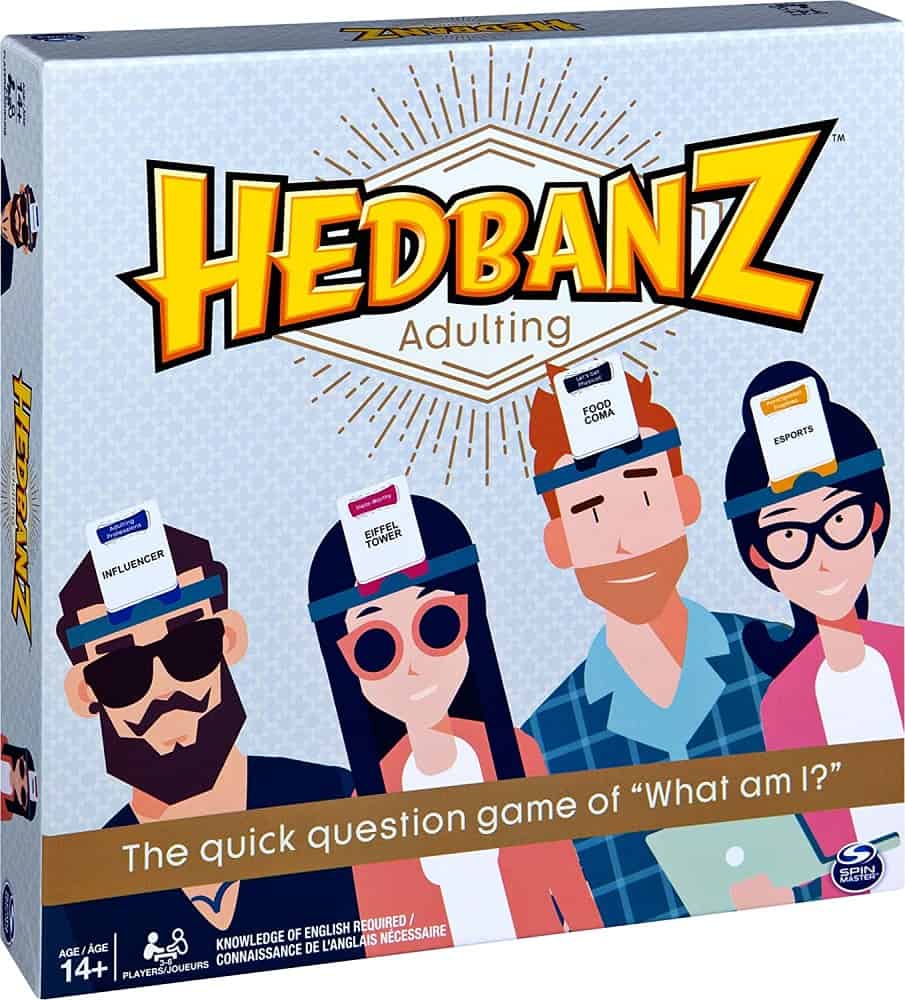 Hedbanz Adulting is clear proof that you don’t have to spend a lot of money to get the most out of a game night. It is highly affordable and gives you the best bang for your buck.

But there’s no “board” in this adult game. Instead, each player wears a headband with a card. Get ready for some wild fun and laughter as players try to figure out what their card says by asking as many questions as they can within 90 seconds.

Number of Players: 3 to 6 players
Average Game Duration: 90 seconds per turn for as long as desired 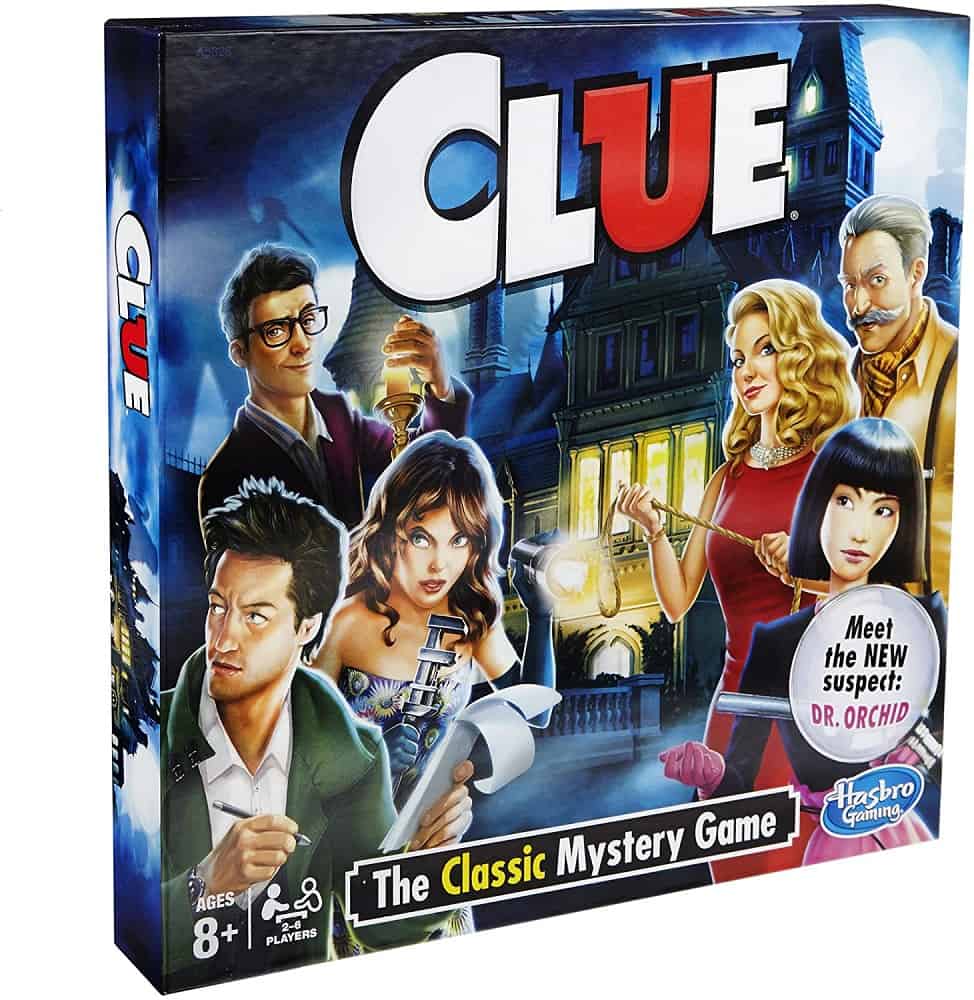 Time to play Sherlock Holmes, but you’re not starring in any movie. Instead, players in the suspense-filled Clue Game try to figure out the circumstances surrounding the mysterious death of Mr. Boddy of Tudor Mansion.

Go through the different rooms looking for clues and eliminating information. Cards represent room (where), weapons (what), and suspect (who). Each player tries to figure out which three cards are in the case file envelop. The first player to correctly figure out all three wins.

If you’ve played this game while growing up, you’ll be familiar with characters like Miss Scarlet and Colonel Mustard. This new version of the Clue Game includes a new character, Dr. Orchid, into the mix bringing the number of suspects to six.

Number of Players: 3 to 6 players
Average Game Duration: 10 to 60 minutes 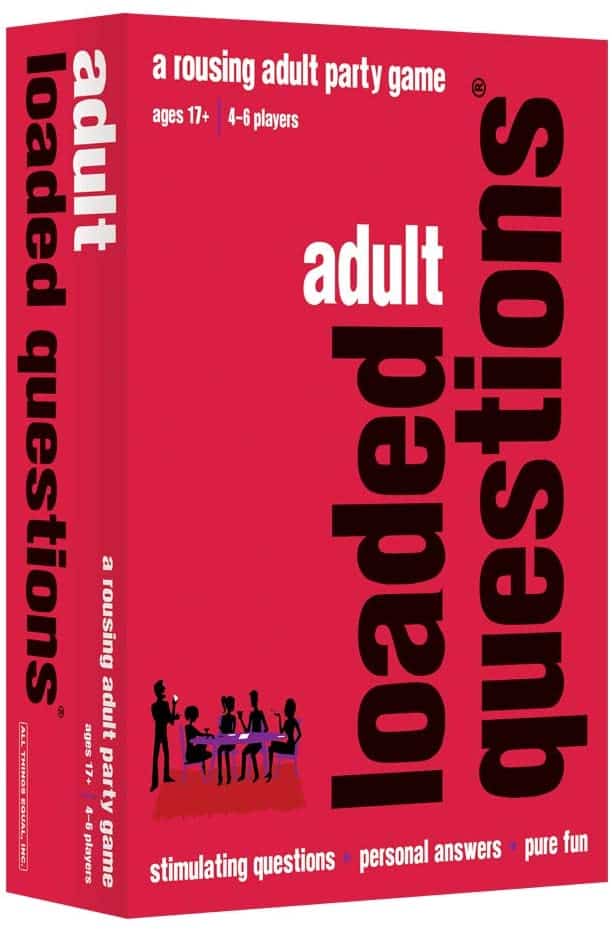 If you’re looking for the quickest way to kick out boredom without straining your brain, you may enjoy the Adult Loaded Questions.

First off, this is not about suggestive questions only (although you will get quite a number of those). These questions are sure to elicit some of the funniest and hilarious responses you’ve ever heard. Plus, there are no wrong answers!

The first player reads out a question, and other players write down their answers on a sheet. Each player gets to give their own answers without thinking too much about it.

Number of Players: 4 to 6 players
Average Game Duration: As long as desired 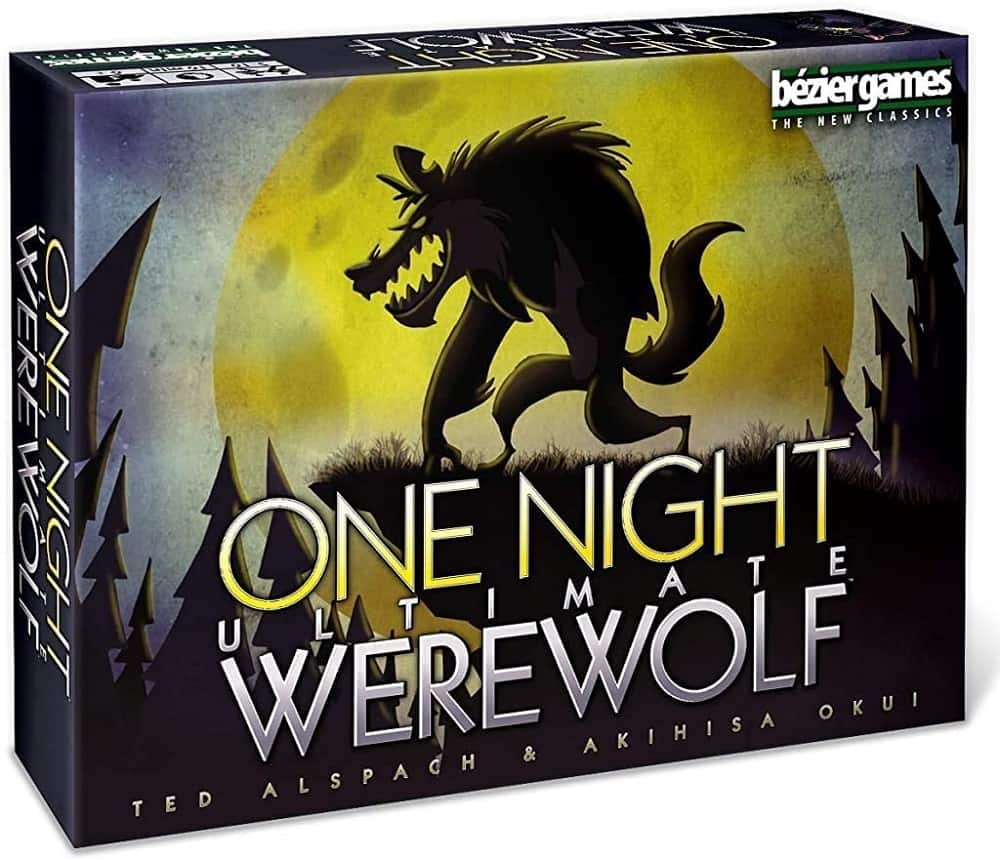 If you have a group of up to 10 family or friends, you’ll want an adult board game that can accommodate everyone without the need for an extension. An excellent choice would be the One Night Ultimate Werewolf board game.

Gather friends and family for the ultimate fast-paced game where players assume the role of a special character, villager, or a werewolf during family game night. Don’t worry if you don’t like your role; the game is fast-paced, so you can expect a change of role soon enough.

The goal is to find one or more werewolf through social deduction. Kill at least one werewolf to win the game, unless you are one of the werewolves, in which case, it is your job to cleverly mislead the other players.

When you play this game, you’ll be shocked (in a good way, though) at how sly and even cunning your family and friends can be!

Number of Players: 3 to 10 players
Average Game Duration: 5 to 10 minutes per round 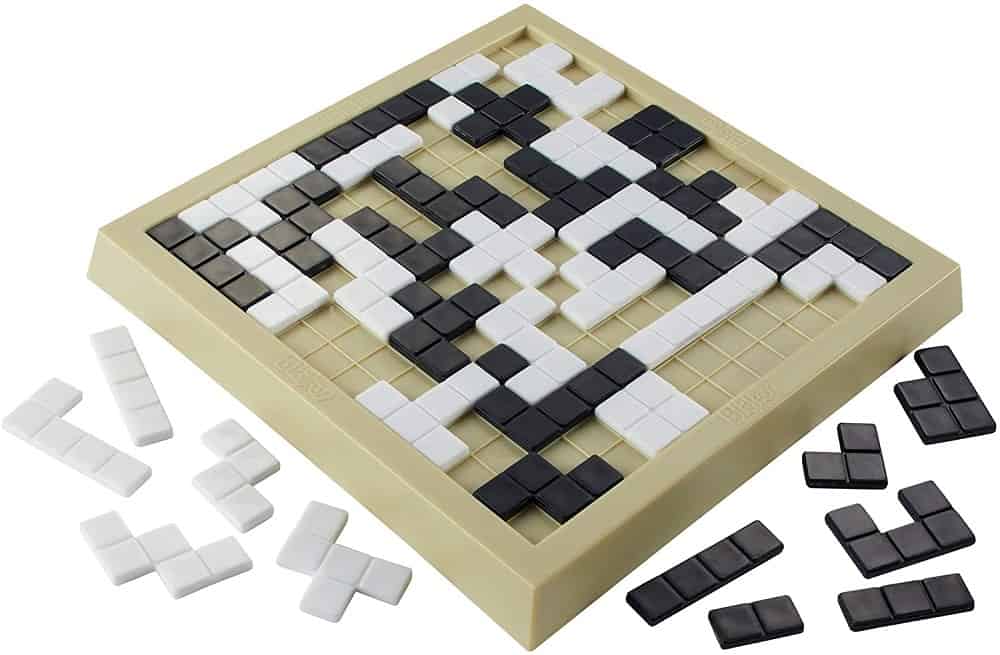 Here’s another game that can easily become addictive, especially if you have a penchant for Tetris. The Blokus Duo is a perfect date night board game for couples.

Whether you are a first-time player or have some experience with similar games, it is easy to love the challenge of this game. Each piece placed on the board has to touch a minimum of one other piece of the same color.

Sounds easy, right? But the tricky part is that the piece must only touch at the corners. Indeed, there’s no steep learning curve with Blokus Duo, but that doesn’t take away from the fact that it can promote healthy brain activity.

The game ends when there are no more possible spaces to fit game pieces. The player with the fewest pieces left outside the board wins. 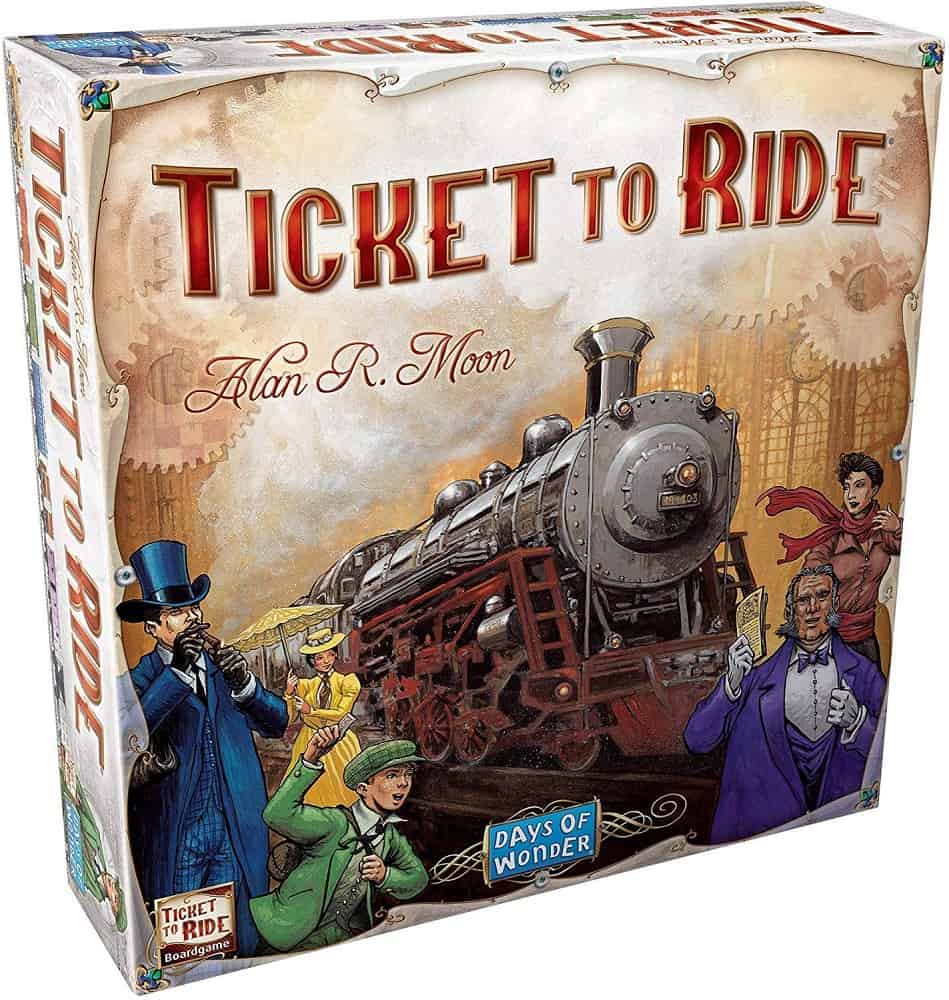 The Ticket to Ride game is a great choice for adults who enjoy complex board games. This one will challenge you to figure out different strategies for grabbing the best train tickets and build train routes.

The game setting is in North America, so your job is to plan how to connect different cities on the continent before your opponents. The fun is in trying to complete the longest continuous route across the board. The player who claims the highest railway routes wins the game.

The award-winning game is a popular game choice among many enthusiasts and will be a great addition to your collection.

Number of Players: 2 to 5 players
Average Game Duration: 30 to 60 minutes 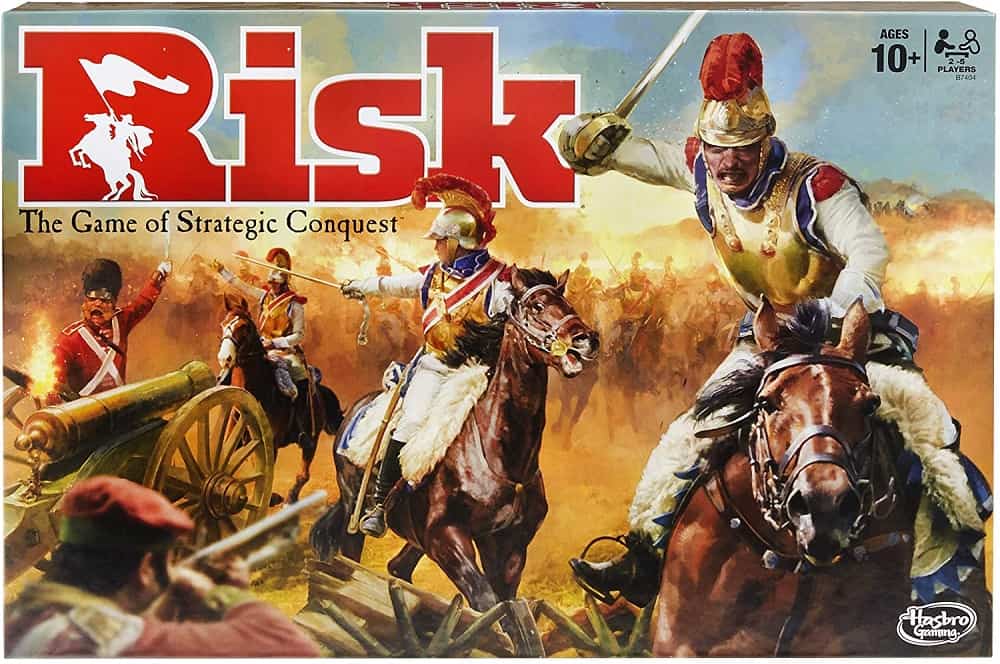 The world is up for grabs! Only the brave can conquer and take over in the Risk Game. Complete different secret missions, move your troops, engage in battle, and claim territories to win the game.

Prepare for unexpected alliances, betrayals, as well as surprise attacks in this game of strategy and conquest.

The Risk Game has a board that lays out the map of the world and offers four different ways to play the game. You can choose any variation, including Risk for 2 Players, Secret Mission, Capital, and Classic. All the game “modes” have the same goal – to take over the world.

The game includes a detailed and colorful guide that explains how to play the game. It also includes a FAQ section and a section for useful hints and strategies.

Number of Players: 2 to 5 players
Average Game Duration: 60 minutes to 8 hours (depending on the players) 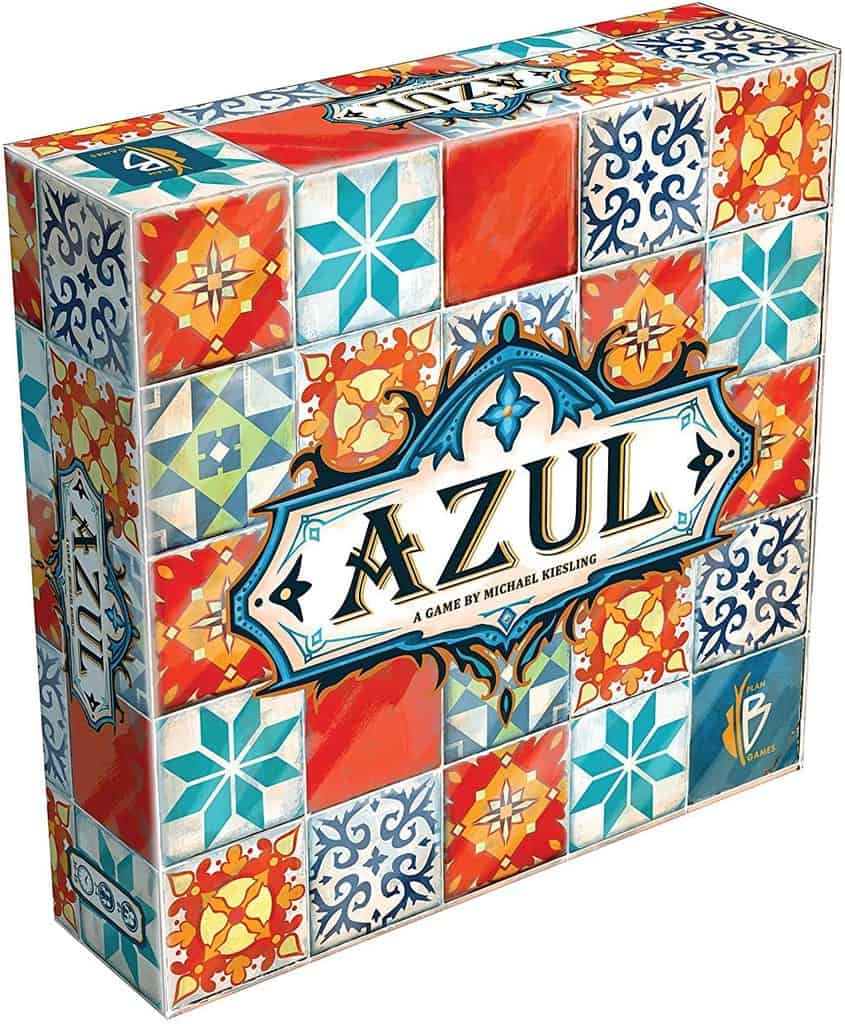 Got a group of two to four friends you want to kill a few hours with? Azul can help you with that. It is a strategy game, but it doesn’t drag for too long. Azul is a fast-moving game and really fun to play.

The goal is simple: claim tiles and strategically place them on the board to build a decorative mosaic fit for a royal palace. Every correct tile placement scores a point. Create special patterns or sets of the same tile colors for extra points.

It’s easy to play this game over and over again, thanks to an ever-changing set of tiles during each game. Learning Azul is not difficult; mastering it is a different ball game entirely!

Number of Players: 2 to 4 players
Average Game Duration: 30 to 40 minutes 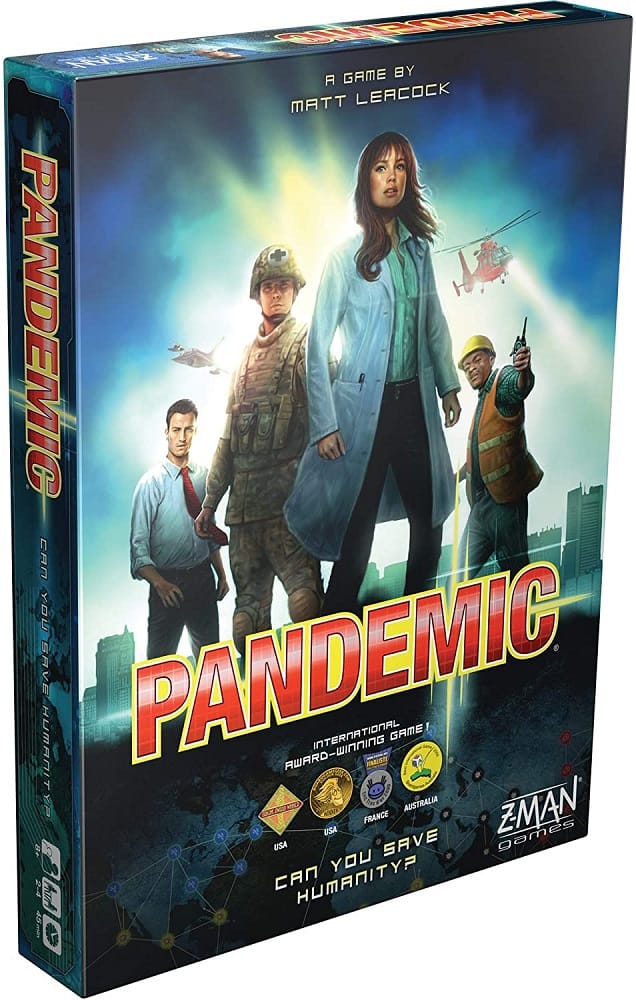 Pandemic is a timely adult board game, especially at a time when the world is grappling with a deadly virus. In a battle to save humanity from diseases, you must cooperate with other players to win against the game instead of other players.

You lose the game if you can’t contain the spread of the disease. The only way to win is to treat people in different cities around the world, as you collect city cards for completing research.

Each player can use special abilities to help the team find a cure for the diseases. You can make the game more challenging by adding epidemic cards to the deck. Keep in mind that this is a cooperative board game, so it is either everyone wins, or you all lose. 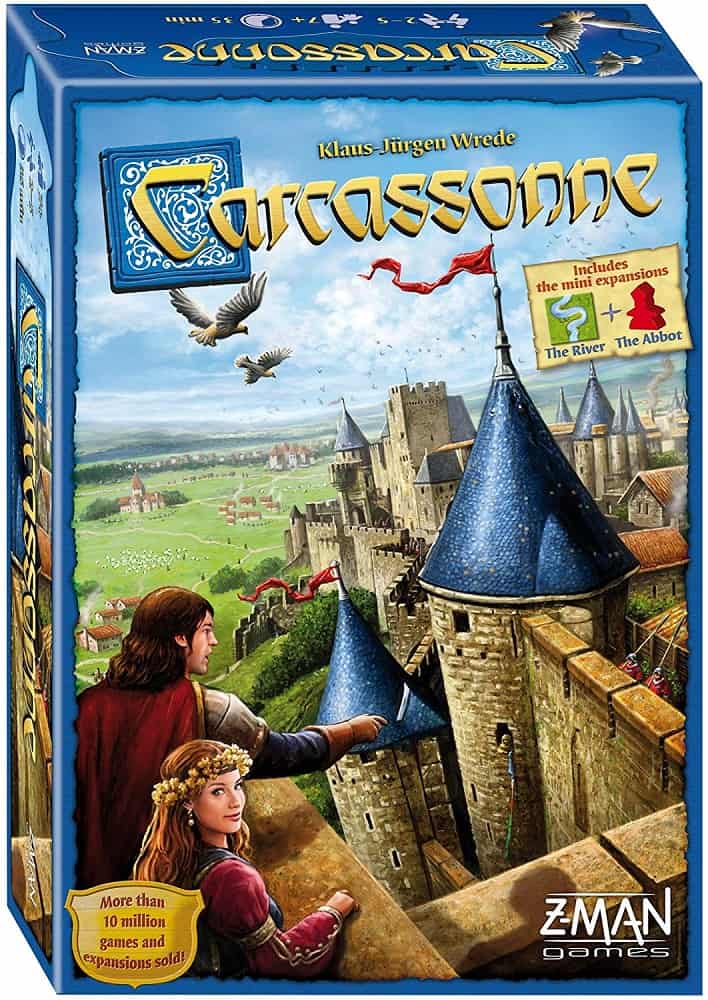 Each player tries to outscore other players by cleverly placing tiles to win points. Each feature completed scores a point. With 84 different tiles, the game can be configured into a myriad of combinations, making it unique every time.

Carcassonne is fun to play and is a great way to get introduced to modern board games.

Number of Players: 2 to 5 players
Average Game Duration: 30 to 45 minutes

Betrayal At House On The Hill 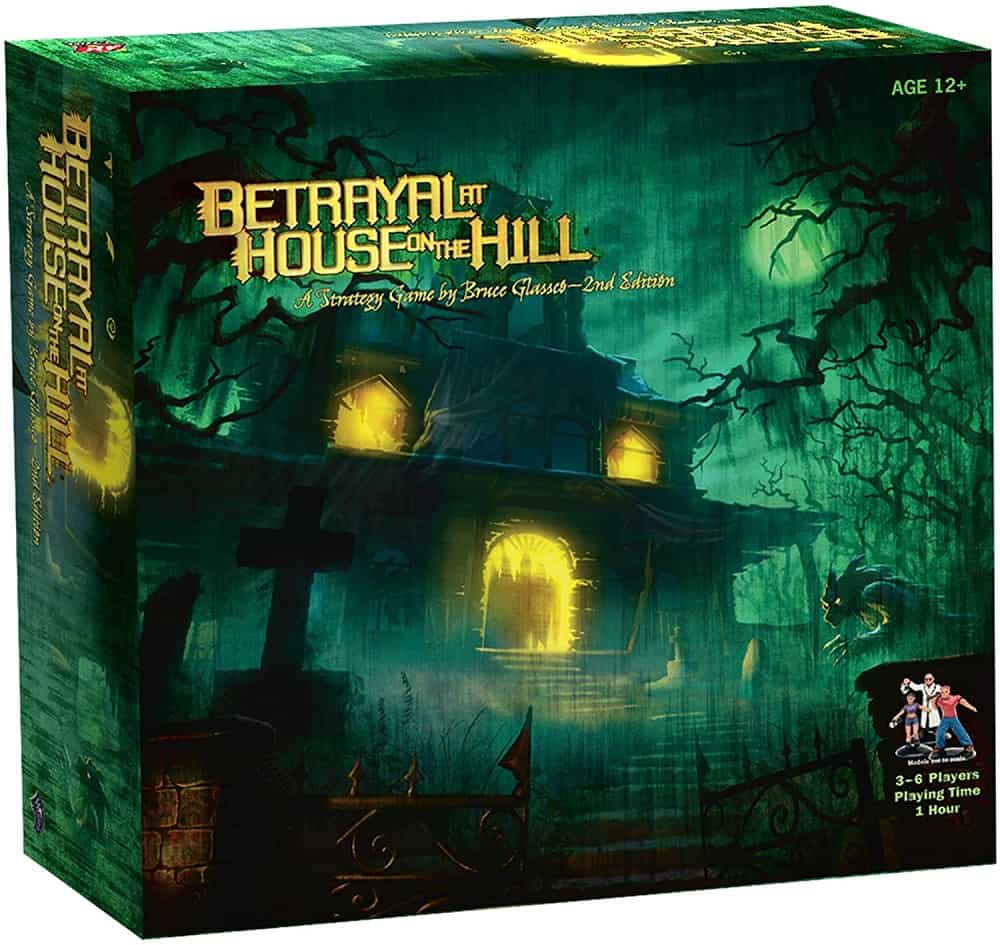 Betrayal At House On The Hill is your game if you’re thrilled by spooky stuff or horror movies. But this adult board game is not just about sheer eeriness; it involves strategy, too.

Like all horror movies, players find themselves in a haunted house where they know they have no business being. In this case, players even get to build the haunted mansion themselves using tiles and then try to come out of it alive.

There’s no chance of getting bored with this game, thanks to a huge collection of scenarios and rooms that can be pieced together to form a new horror plot every time. While the game is designed around a horror theme, it is actually fun and easy to play. 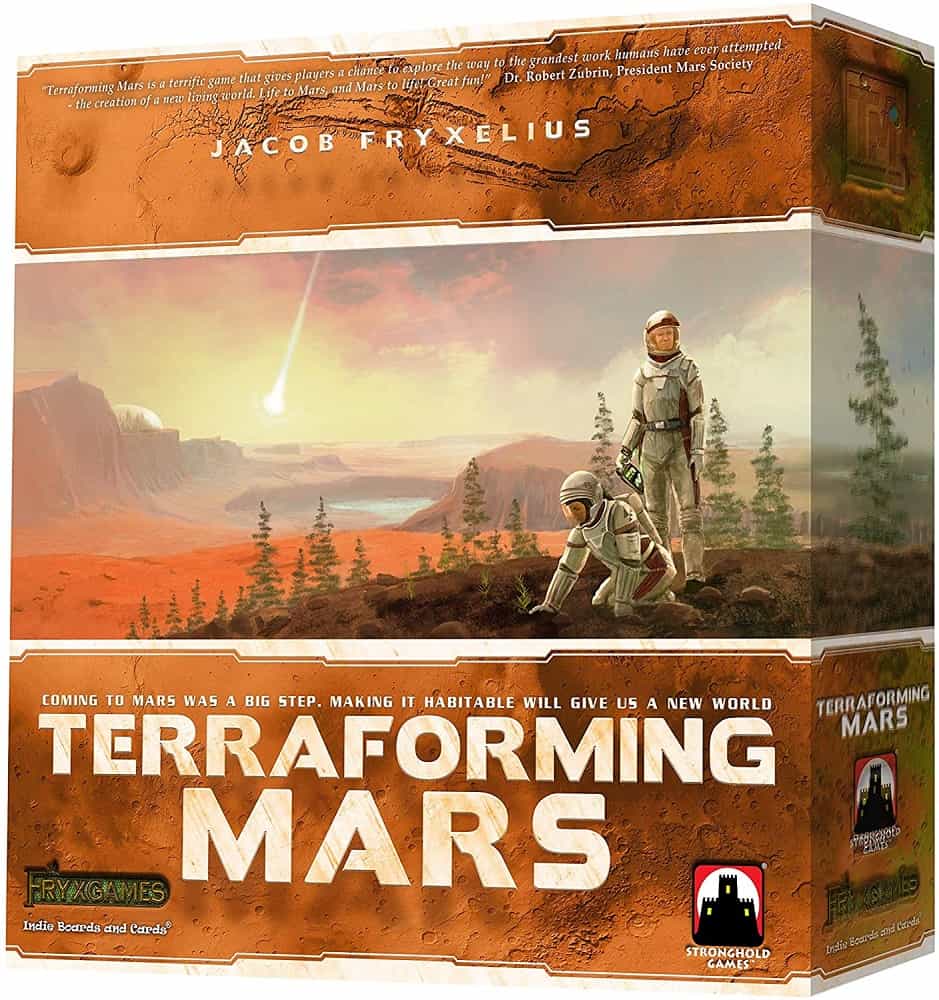 If you like complex games, you’ll find this one quite challenging. Built around the theme of taming the red planet, Terraforming Mars challenges you to compete for and complete more than 200 projects to be recognized as the most successful corporation out in space.

Your job is to make Mars habitable for humans without wearing a pressurized suit. The board is an actual map of the Tharsis region of Mars, and it comes with cards that players will use to improve the planet’s atmosphere and economy.

The futuristic Terraforming Mars board game takes a while to complete, making it a great choice if you have a few hours to kill. 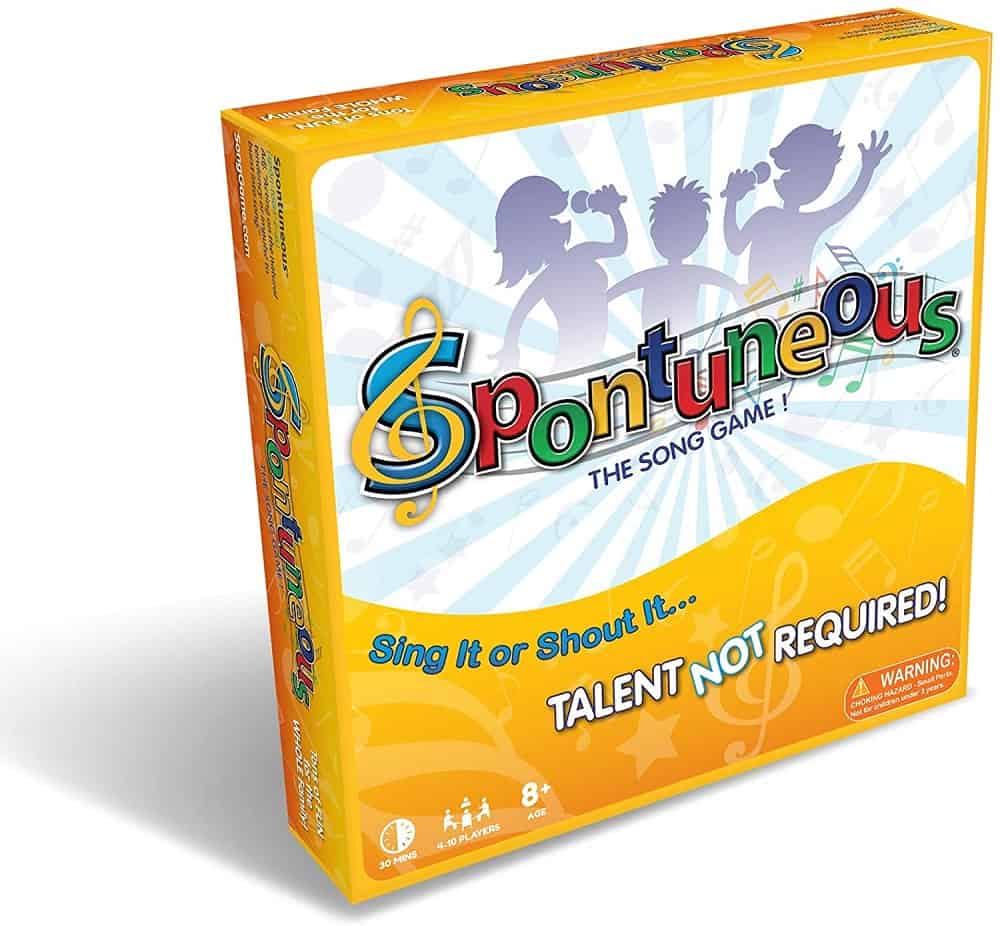 Are you a talented singer? The answer doesn’t really matter because the only thing you need to play Spontuneous is a trigger word – not even a voice. Of course, if you love singing or know plenty of songs, then you’ll likely be a champ at The Song Game.

There’s no special time for playing Spontuneous. You can enjoy this game at any party, around a campfire, or a family get-together. Here’s a fair warning: you’re going to get a lot of arguments during this game. Thankfully, it’s all friendly argument with plenty of rib-cracking laughter and hilarious singing.