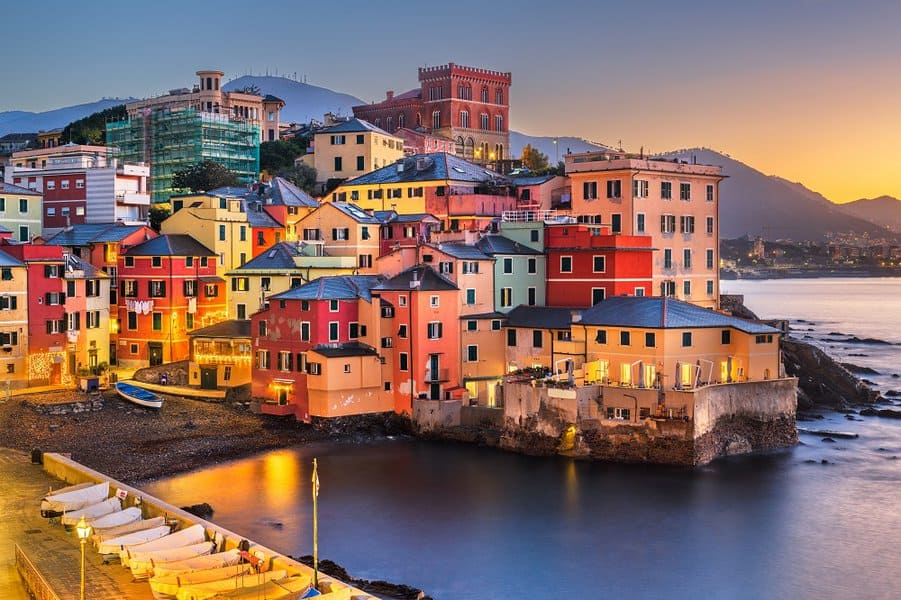 Where To Find the Most Colorful Houses in Italy

Italy is one of Europe’s great nations. It has a rich history and culture stretching back to the days of the Romans and is responsible for many of today’s great breakthroughs. Whether you’re a foodie, an adventure lover, a history buff, or someone who just loves to travel and experience new cultures, Italy has it all. It’s also big on architecture, with the country known for its churches, Renaissance structures, and colorful house. In fact, the most colorful houses in Italy include some of the most visited villages and towns the boot-shaped country has to offer.

These colorful houses date back centuries and are mostly found in the northern region of Italy and along the coast. Many are situated near the ocean and offer amazing views of the local area. If you are after the perfect travel pic for your Instagram, these are the towns for you. So read on and discover where the most colorful house in Italy can be found

Where To Find the Most Colorful Houses in Italy 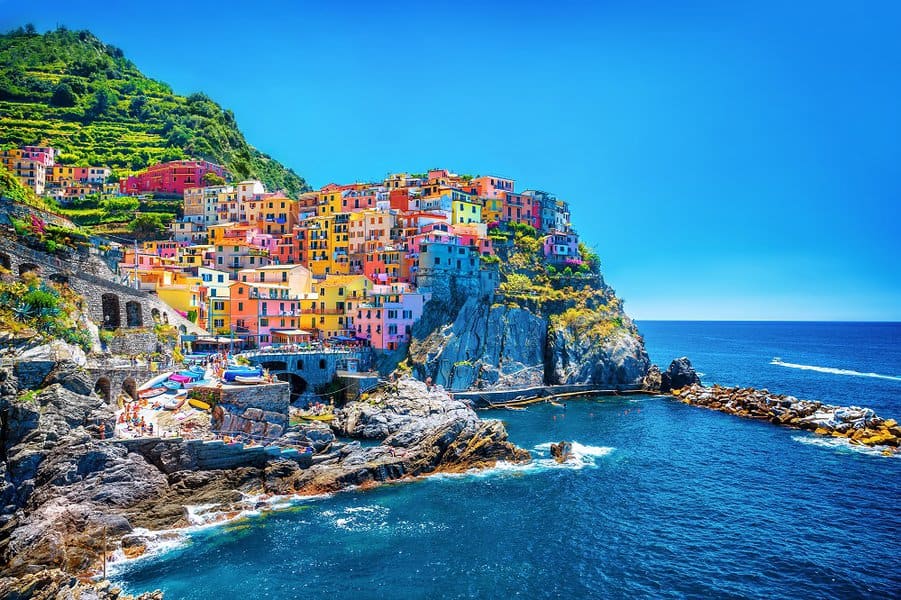 One of the most famous areas of Italy, Cinque Terre is made up of five small fishing villages along the coastline on the Italian Riviera. While we could go into detail about each town separately, they are all very similar and offer travelers an incredible opportunity to capture some of the bright colors Italian homes are known to be decorated in.

Comprising of the five hillside villages, Monterosso, Vernazza, Corniglia, Manarola, and Riomaggiore, each town is connected by a train, and a ferry that visitors can hop on and hop off as they explore each town. For those wanting a bit more exercise, you can also walk between all five towns, leading you up into the mountains and along the jagged coastline.

The UNESCO World Heritage Site has a rustic charm, with each of the small towns having its own selling points, such as Monterosso’s sandy beach and Manarola’s photogenic harbor surrounded by multi-color houses, pizzerias, and gelato shops. 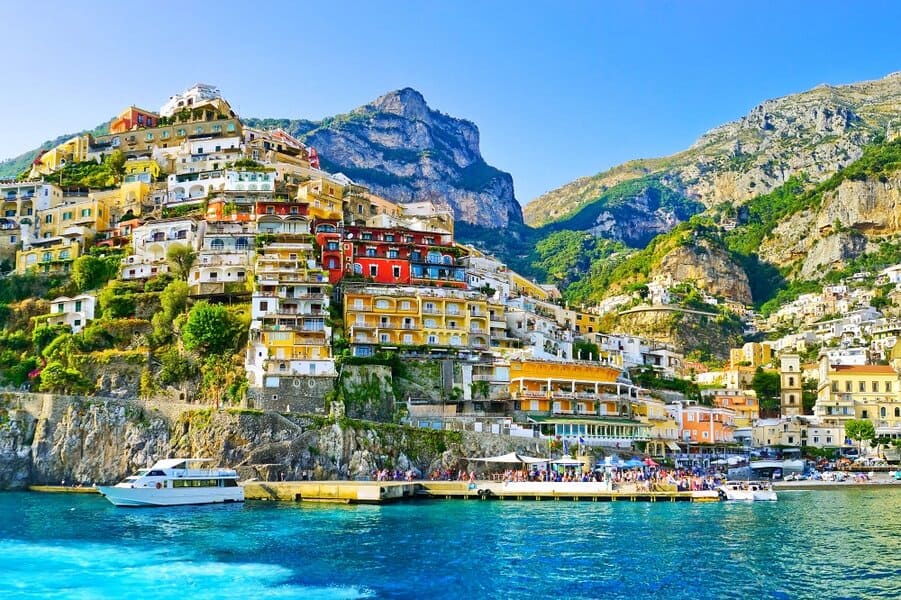 The Almafi Coast is a favorite spot for tourists, including Italians who spend their summer break tanning on the pebble beaches while sipping Aperol spritzes. A wealthy port back in the day, Positano fell on hard times during the early 1900s before turning itself into a popular tourist destination.

The small town starts at the crystal waters of the packed beach and rises up into the foothills. Dominated by ancient churches and homes, Positano is also known for its glamorous side, with expensive hotels and restaurants littered throughout the city.

Fun fact: Positano is believed to be the first Italian town to introduce the bikini trend after it become all the rage in France. 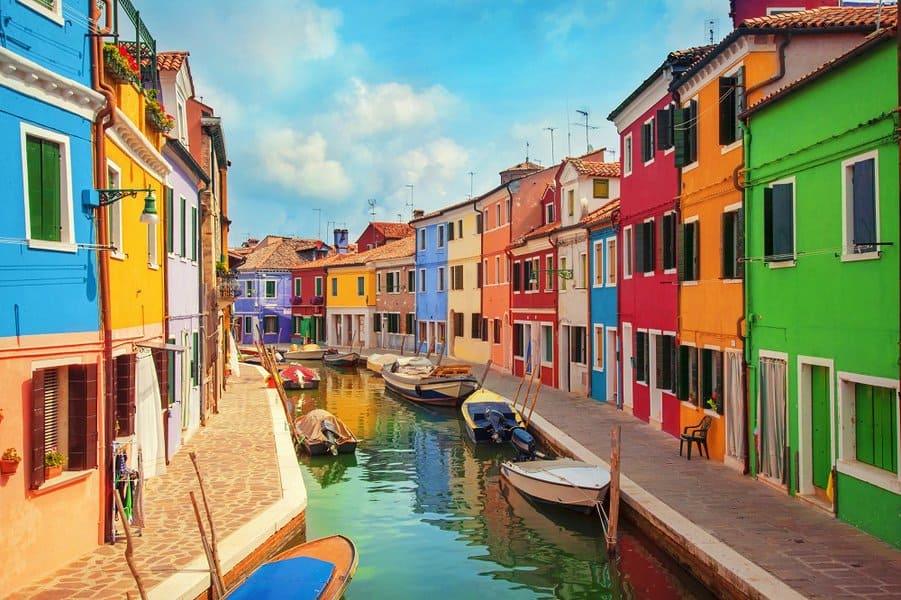 An island just seven miles from the majestic city of Venice, Burano Island is like stepping into another world. As you walk the canals your sensors are overloaded with the colorful homes that line the streets. All the colors of the rainbow are represented and legend has it the houses were all painted bright colors so that the fisherman could tell how far they were from the shore.

Famous for its needle lace and production of Venetian masks, the town is full of small stores selling everything from antiques to tourist trinkets. It makes for a great day excursion from Venice. 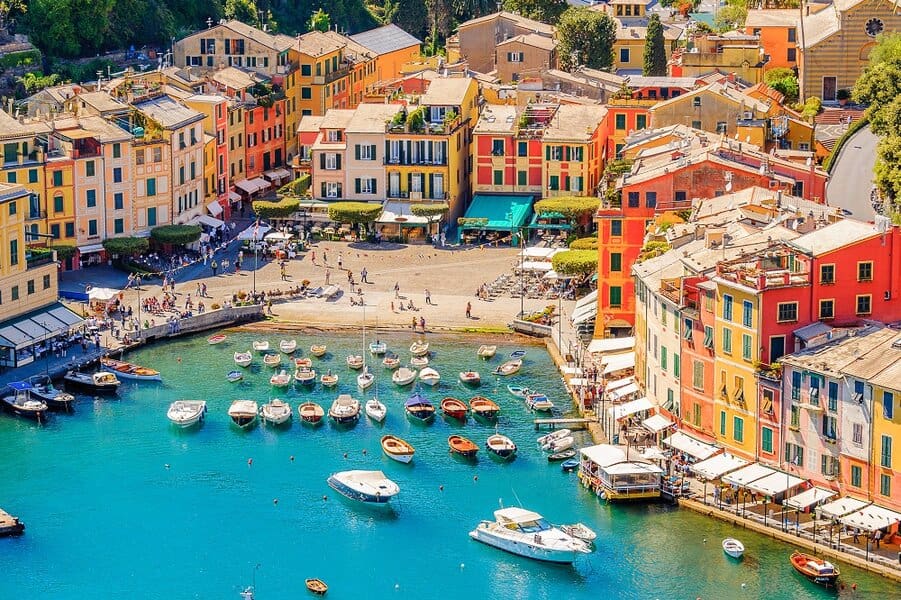 Portofino is another Italian town that made its bones as a fishing village before tourism became its number one industry. The terracotta homes in an assortment of colors circle the glistening waters of the Italian Riveria while the main port has swapped fishing boats for luxurious yachts.

There is certainly a feeling of wealth when you walk around Portofino, with rich Europeans splashing the cash on fresh seafood at the many incredible restaurants and splurging on designer goods in the high-end retail stores. Even if your bank balance isn’t bugling, Portofino offers something for everyone, with several churches, some great gelato, and many Instagram-worthy locations. 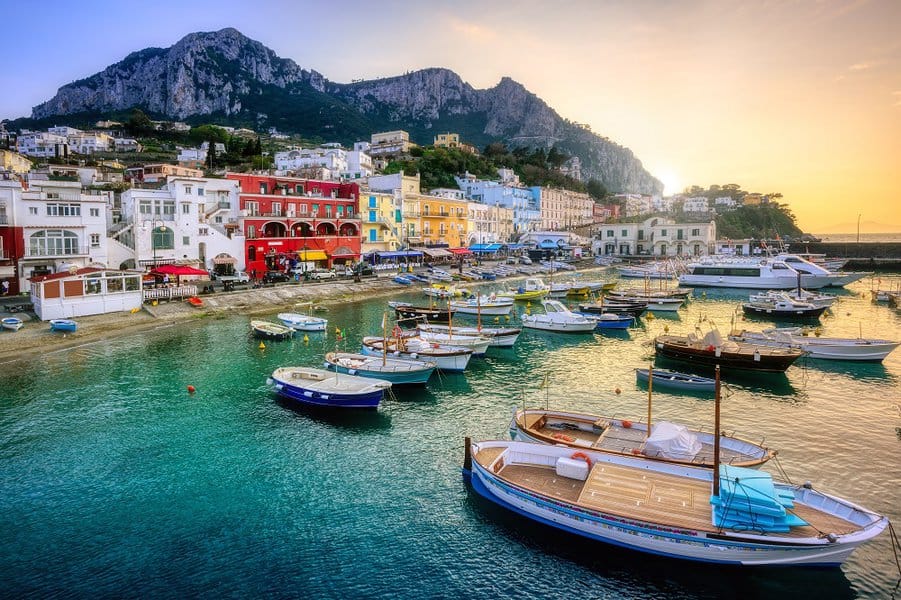 Located off the coast of the Sorrento Peninsula, Capri is a dazzling island paradise well worth a visit if you are traveling through Italy. A popular resort during the 50s, these days Capri plays host to the rich and famous. Walking through the vibrant town you could be shoulder to shoulder with Hollywood stars or Italy’s elite. There’s certainly a vibe of luxury that extends to the designer shops and flashy cafes offering overpriced coffee and focaccia.

For those who want to learn more about the island’s history, there are 12 churches, seven museums, and several monuments scattered across Capri. We recommend a walk along the harbor where the colorful old houses create a picturesque view that will be the envy of all of your friends.

Genoa is one of Italy’s most historic cities. The capital of the Italian region of Liguria has the busiest port in all of Italy. As well as importing and exporting, hundreds of thousands of tourists pass through on cruise ships sailing around the Medetrarrian, helping boost the tourism of the famous town.

There is much to see and do in Genoa, and while most are drawn to Cinque Terre, the small town of Boccadasse also showcases Italy’s love of colorful houses. The fishing village has rows of pastel-colored buildings where the locals live and a cobblestone beach that gets packed with bodies during the summer months. 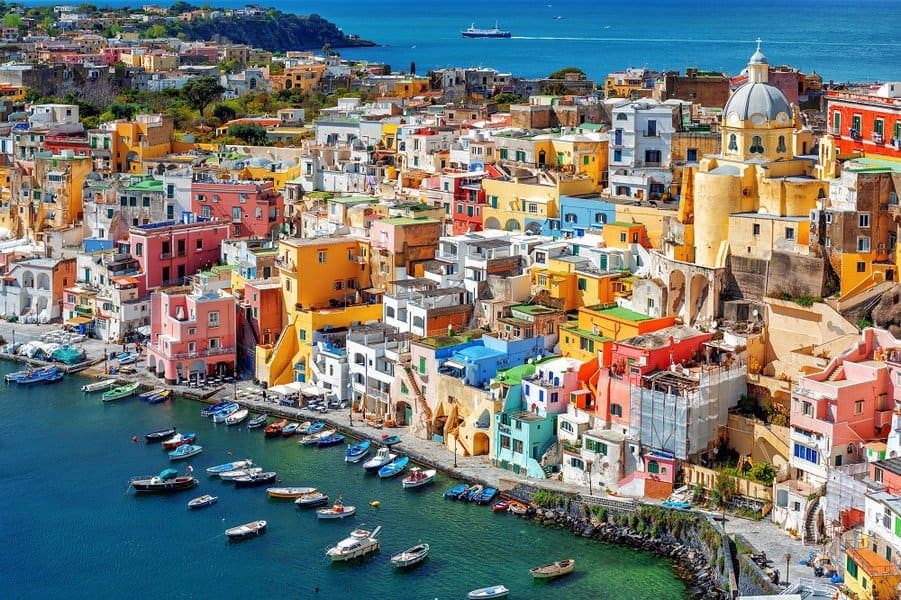 Naples is mainly associated with pizza and the Cosa Nostra, but it’s also home to the next big Italian tourist destination. Procida, named Italy’s Capital of Culture for 2022, is a small island off the coast of Naples that is quickly become a must-visit. Like many other seaside towns, Procida features colorful houses, winding streets, historic sites, bustling cafes, and best of all, near-empty beaches.

Procida has all the best things about Italy in one spot and harks back to an earlier time before modern society took charge. The people on the island have a carefree attitude that is hard not to embrace as you eat gelato while exploring the town’s history and culture. 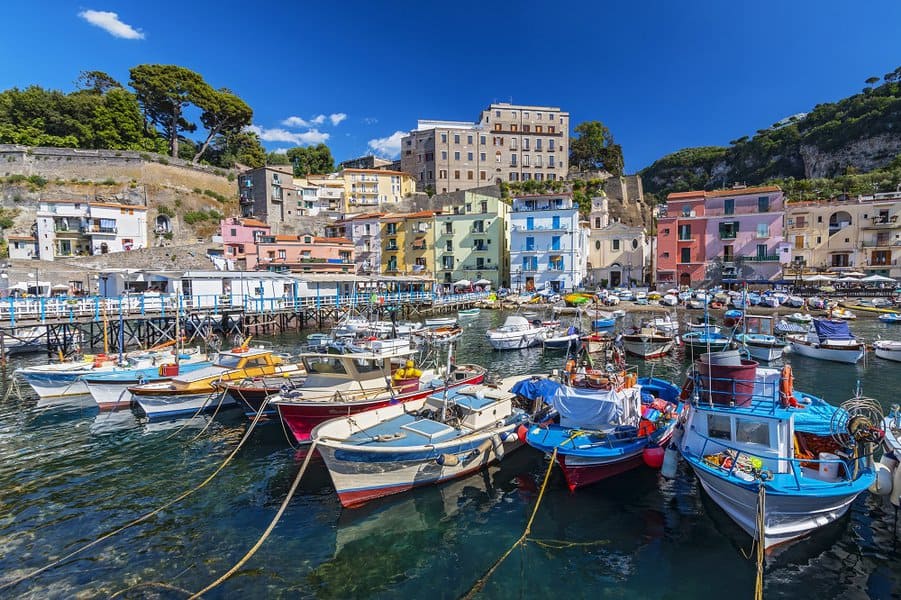 Sorrento is another southern Italy town that looks out onto the Bay of Naples. While not officially part of the Amalfi Coast, it’s close enough that most people extend their trip to include the beautiful town. Sorrento is built into the high-rise cliffs that dominate the area and makes a great stop for anyone visiting Pompeii, which is just an hour away by train. The Neapolitan-colored houses and shops add life to the seaside town that has played host to some of the great literacy giants, including Charles Dickens, Johann Wolfgang von Goethe, and Leo Tolstoy.

Like all Italian towns, Sorrento has a good mix of museums, cafes, and shops where you can immerse yourself in the Italian lifestyle. Highly recommend. 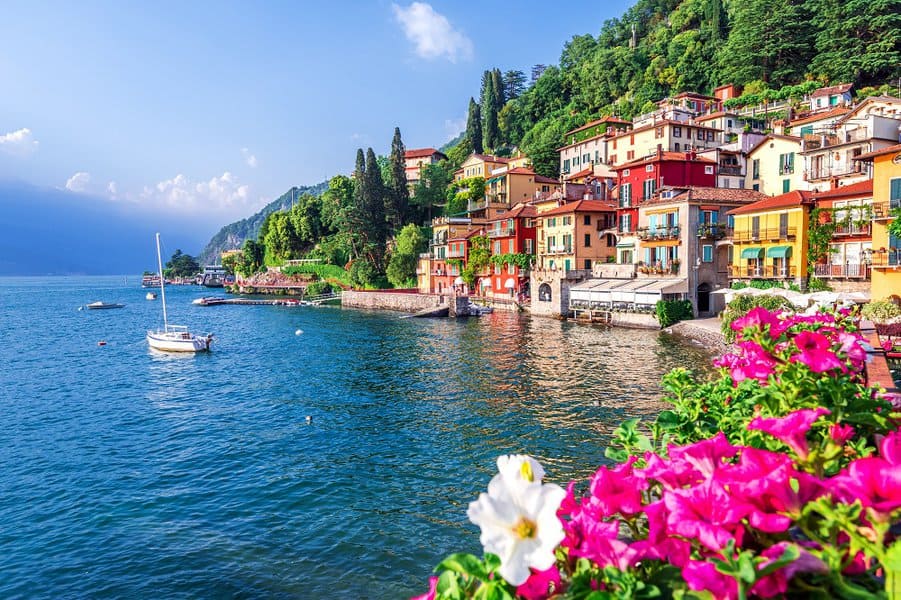 Almost everyone has heard of Lake Como. The resort area is known for its beautiful scenery and upscale hotels and is often visited by famous folk. George Clooney even owns a home there. Varenna is one of the best towns to visit if you are thinking of making a trip to this incredible area of Italy.

On the eastern shore of Lake Como, this is another fishing village that has captured people’s hearts thanks to the historic colored buildings that make up the town. The traditional village might be small but there is a lot to see and do as you wander the tight alleys and marvel at the breathtaking views of Lake Como. A boar trip is a must while those who enjoy nature can head into the nearby hills for some hiking.