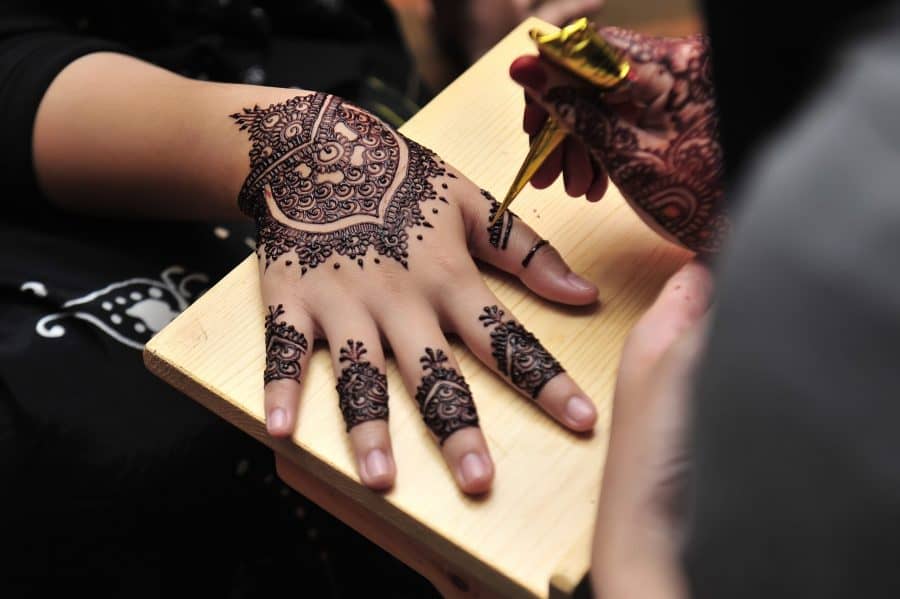 The practice of henna tattoo is featured in Indian weddings and celebrations but is now gaining popularity in the US. Explore details of henna art, the amazing history of henna design, its role as a temporary tattoo style, and reasons for its increased use in the West. 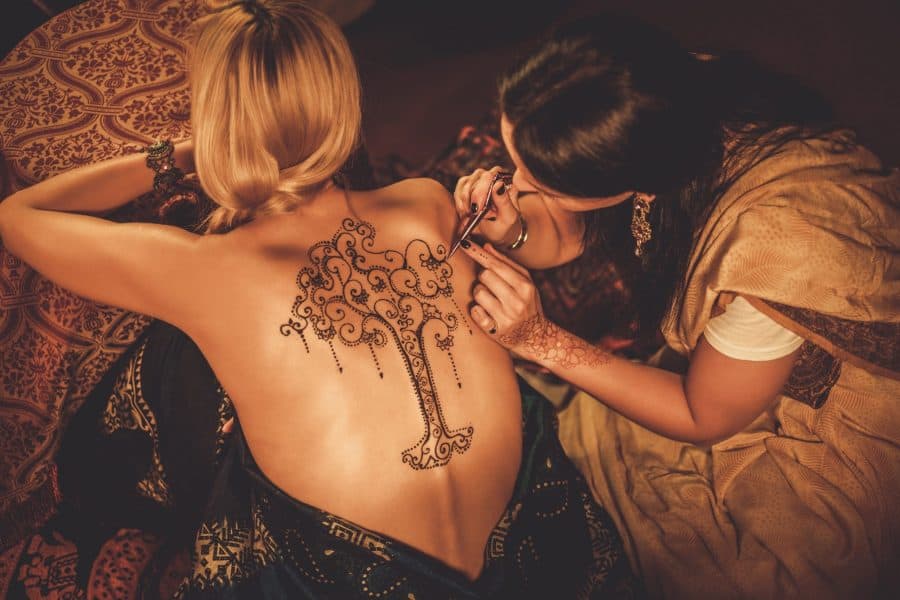 It wasn’t too long ago that henna tattoos were relatively unknown in America, despite various fleeting periods of popularity since the Industrial Revolution. Thanks to the internet and the growing influence of Indian art and culture in the West, henna tattooing has made its way firmly into the cultural consciousness.

Traditional Henna body art has gained popularity around the world over the past 30 years, typified by the intricate flower patterns seen on the brides in Indian weddings. While more people are familiarizing themselves with this ancient practice of intricate design, many are still unsure of the big picture—and small details—that make this cultural tradition so interesting.

This article examines details of real henna tattoos and provides you with a need to know guide about the use of natural henna in body art.

Henna art is sometimes referred to as a form of temporary tattoo, though this is a marketing strategy that is a recent invention. While it used to decorate the skin, henna paste and its similarities with tattoo ends there – in simples terms henna is a paint. Tattoos puncture the skin and are permanent thanks to a biochemical process that takes place in the deeper layers of skin, while henna dye interacts with only epidermis (the top layer).

In comparison to other “semi-permanent” tattoos, each has their own merits. These so-called semi-permanent tattoos use ink to apply a design to the skin that may last up to a week and are best used to “test drive” a potential tattoo design and check appropriate placement.

Natural henna on the other hand (which can be made for tattoo using henna paste or henna powder) is longer lasting but with its unmistakable color no one will mistake it for an actual tattoo.

Henna dye is naturally produced from the leaves of the lawsonia inermis tree, a shrub native to northern Africa, India, Asia and areas of Australia in semi-arid and tropical climates. While the whole leaves of the henna plant will not stain the skin, when the plant matter is broken down and mashed into henna paste the lawsone molecules are free to bind with the proteins contained in epidermis. This is how traditional henna stains the skin.

Also known as the henna tree, the mignonette tree and the Egyptian privet, henna tattooing and body art is thousands of years old. Evidence of temporary henna tattoos can be found in cultural sites around Africa, the Middle East and India. 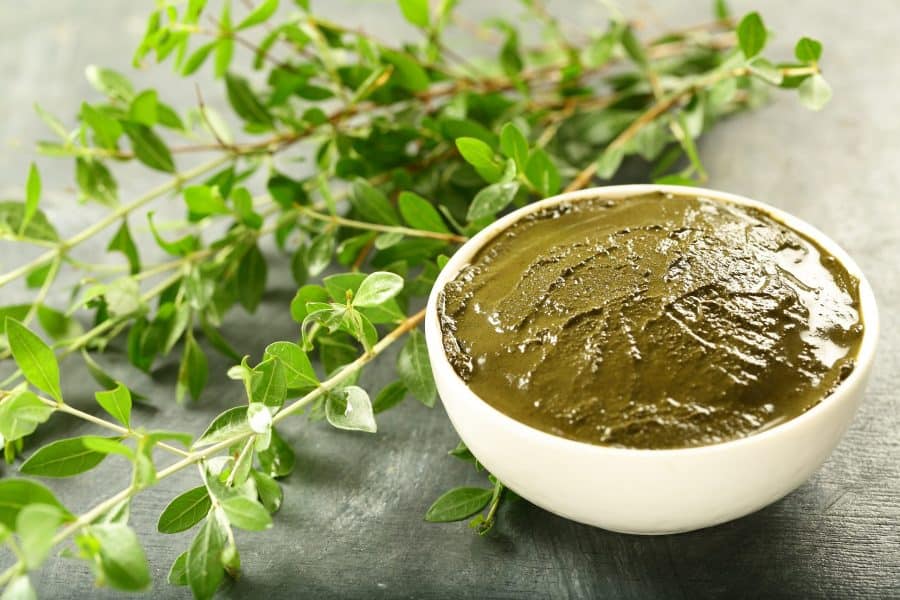 How to Apply Henna

While most people purchase traditional henna in pre-packaged cones (sometimes henna powder is bought and then mixed with water), it is best to understand the process used to create the ingredient responsible for stunning henna design.

True henna contains only natural ingredients: henna leaf powder, water or lemon juice, some sort of essential oil (usually tea tree or lavender) and sugar. These ingredients are all mixed in a bowl until the desired consistency of paste is achieved. Other chemicals should be avoided as they can cause adverse reactions (see Dangers of Imitation Henna).

Henna cones are similar to tiny piping bags used for decorating cakes; the tip is clipped, and henna paste is squeezed out then applied to the skin. The first bit is often hardened, so some paste must be squeezed out before the proper consistency is reached.

Given the properties of henna stain, many first timers are recommended to use a pane of glass to practice their designs in order to get a feel for using the cone to apply the paste.

Once the artist feels comfortable, they can start applying henna body art to themselves or a friend; the possibilities are endless, although flower, mandala, and paisley patterns are especially popular in creating funky henna tattoo designs.

After the henna is applied in the desired pattern it will dry in about ten minutes, after which it must be left to set for as long as possible. It is during this process that the lawsone molecules leach out of the henna paste and bind to the proteins in the epidermis. It is this chemical process that is responsible for the way henna stain works – the longer an intricate design is left on the skin, the darker it will turn out and the longer the art will last.

It is also worth noting that different skin tones and different areas of the body react differently to henna, specifically, hand tattoo and soles of the feet. When applied here, as is common in the Indian tradition, henna can turn out almost black compared to the usual reddish-brown tones. 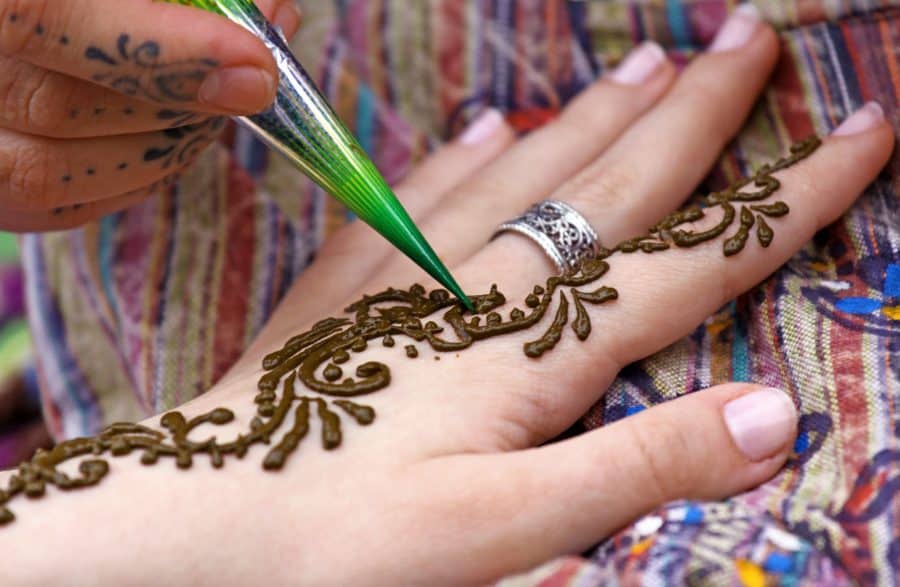 The oldest recorded use of pure henna dye dates back to Ancient Egyptian civilization. Archaeological research has found extensive evidence of the use of henna—alternately known as mehndi—by the Egyptians, most commonly as a hair dye and fingernail stain. By adding various additional ingredients, the Ancient Egyptians were able to achieve different colors and tones for their henna, each with specific benefits and uses for different occasions.

Later, the Egyptians altered their use of henna for use in decorating their bodies with the dye, much in the same manner that it is used today. As with India and modern interpretation, the hand tattoo was a major focus for each henna artist.

It is said that in 1400 BCE the Queen of Sheba adorned herself with henna art for her journey to meet King Solomon. The last reigning Egyptian Pharaoh, Cleopatra VII, is also believed to have used henna body art to decorate her body. 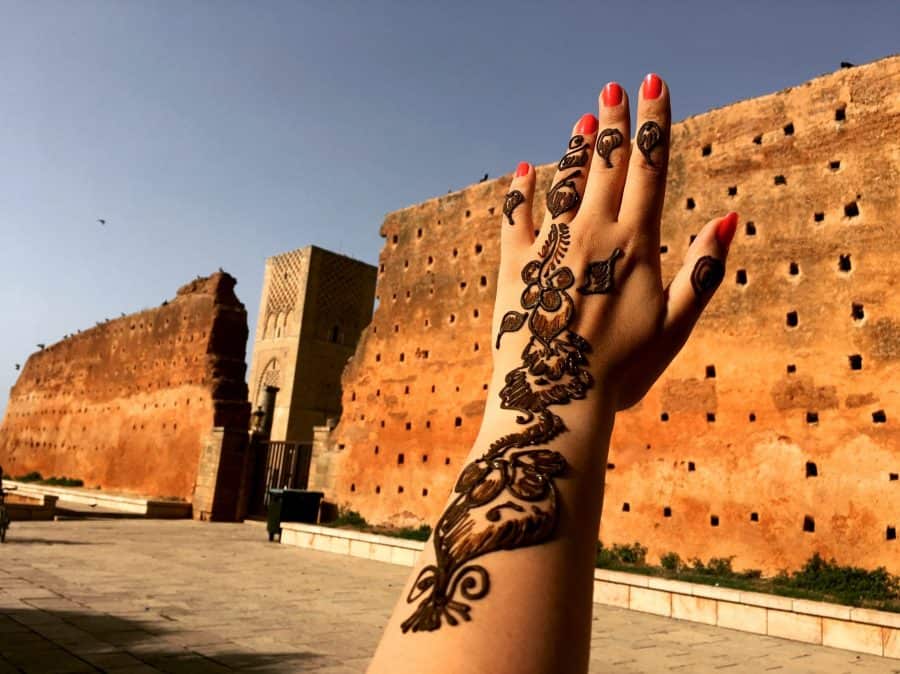 Modern Popularity in the West

Beyond these ancient origins, henna’s use around the world has continued, having numerous peaks and troughs in popularity in the West. In England during the 1800’s, henna art found a home in the Pre-Raphelite artists who, unlike others British groups, fetishized red hair and used henna hair dye to augment their own

In the 1900’s, Parisian opera singers, looking for a way to grab the audience’s attention, used henna as the main ingredient to dye their hair red. One Parisian courtesan, Cora Pearl, was referred to as La Lune Rousse (red-haired moon) and even admitted to using henna to dye her dog’s fur to match the color of her locks.

By the 1950’s Lucille Ball was known to use a “henna rinse” treatment to keep her red tresses bright, while the hippies of the 1960’s had a revived fascination for the Indian uses of the dye for tattoo ideas thanks to an increased interest in the religion and culture of the Sub Continent. 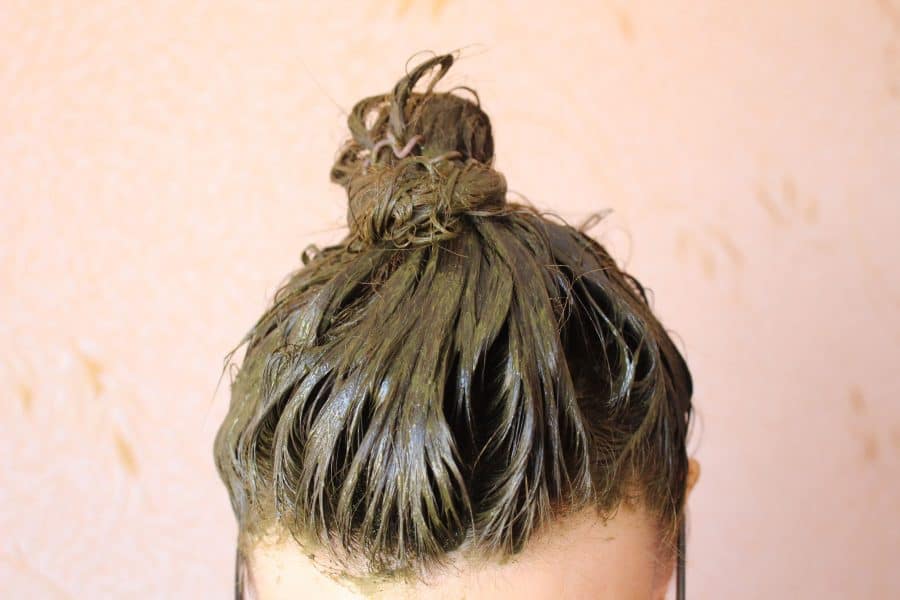 Henna tattooing remains an important element for a variety of cultures across Northern Africa, the Mediterranean, the Middle East and India.

In Muslim countries many women continue to use the dye to stain their fingernails with dark color, with the practice mentioned in a hadith by the Prophet Muhammad. Henna is often used by men to dye their beards. The practice of dying beards is especially popular with the Pashtuns of Afghanistan and Pakistan.

In India, intricate design motifs are applied to the body using henna paste during special occasions, most notably for weddings and engagements. A specialist tattoo artist will apply designs on the hands and feet of the bride—and often the groom as well—which serve as various good luck charms and are part of the elaborate ceremonies that can last days on end.

In some parts of India, it is believed that the darker the stains on the bride’s hands the better her relationship will be with her mother-in-law, while in other places the depth of the stains is said to represent the bond between husband and wife. 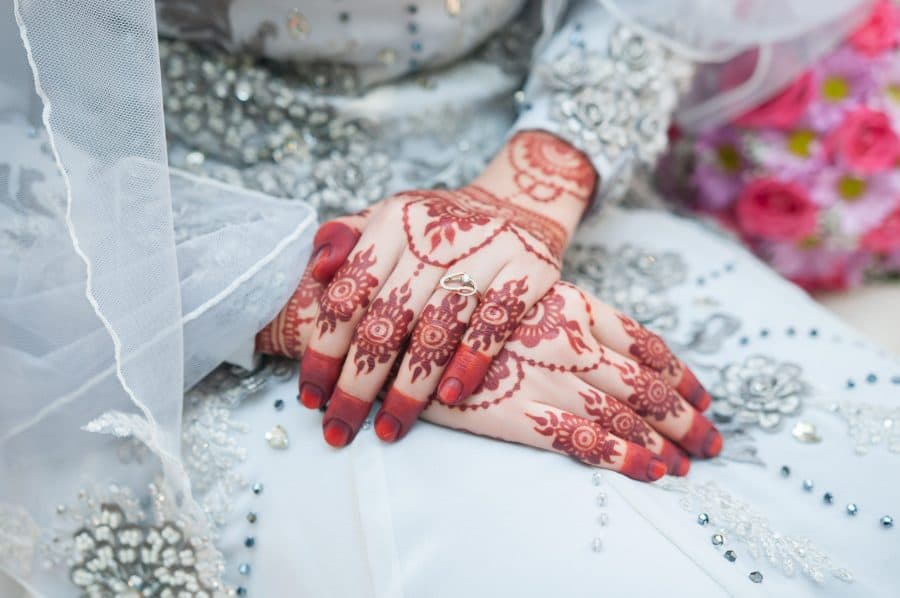 Along with being a beautiful cultural practice, there is evidence that henna has demonstrable, real world uses that can benefit the body. Traditionally henna has been used as a poultice to sooth burns and skin conditions like eczema, as well as a coagulant used to stop bleeding and bandage wounds. Henna is also believed to have some anti-fungal properties and has been used to treat conditions like ringworm and athlete’s foot for centuries.

Along with these uses, henna is a great treatment for cracked nails. The regular use of henna paint in the hair helps to maintain the natural pH levels of the scalp. This can lead to decreased occurrences of dandruff and flaky skin, while also giving hair added strength and a natural shine.

Some have even purported that the bark of the real henna tree is effective in treating conditions like jaundice, although extensive scientific research on this has yet to be completed.

If you’re looking to use henna for reasons other than cosmetic, it’s best to consult a dermatologist or medical professional to make sure it’s useful for you. 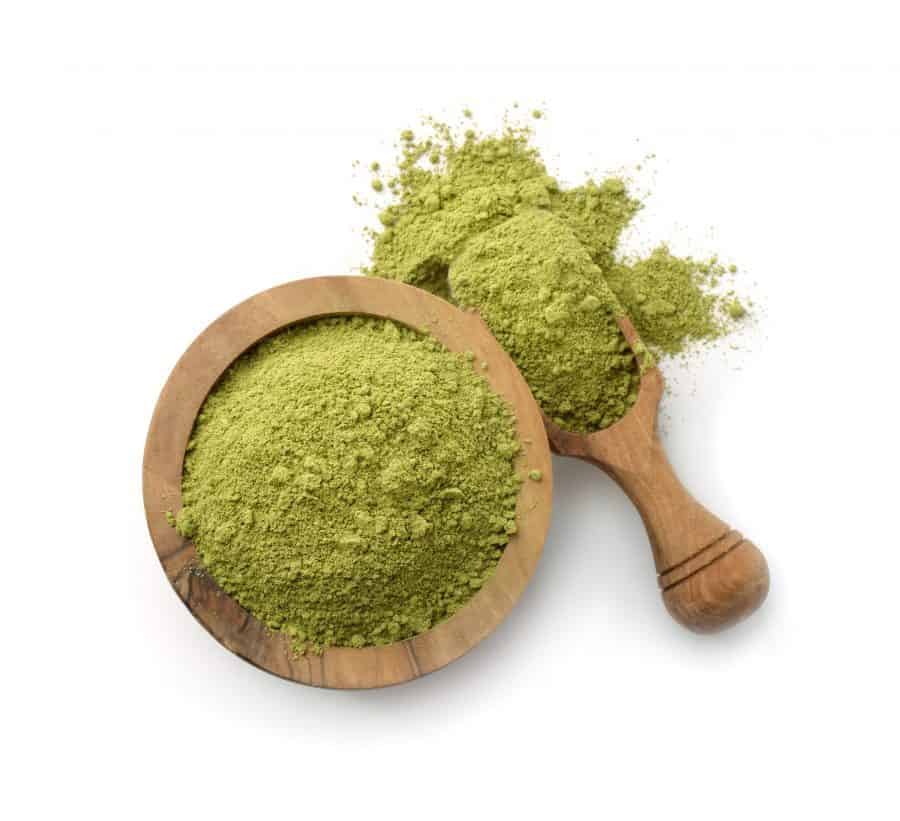 A recent development in the world of henna is the use of different chemicals to achieve a similar effect as henna. This practice comes with great risk of a bad reaction for the wearer. Known as “black henna” or “kali mehndi”, this substance is adulterated with a variety of toxic chemicals that cause an immediate dangerous skin reaction or create problems over time.

The most dangerous black henna chemicals is a transdermal toxin known as PPD (p-paraphenylenediamine). Black henna is a dye used for the creation dark tones, however this chemical is illegal for use on the skin in the USA and other countries thanks to its association with blood and bladder cancers and harm to neo-natal pregnancies in addition to the usual short or medium term skin reaction or allergic reaction.

These are often sold in developing nations where impoverished populations are uninformed of the potential dangers of these chemicals in black henna temporary tattoo. Legitimate henna artists always produce their own paste and if you are ever unsure about the origins of a product or the reputation of an artist, they should be avoided.

Henna tattooing is a beautiful art form with diverse and fascinating origins. Thanks to the variety of designs and its exotic associations, the latest henna ideas continue to grow in popularity in the United States and abroad. With superstars like Beyonce and Madonna spotted wearing intricate henna tattoos, there is no sign of the trend slowing down.