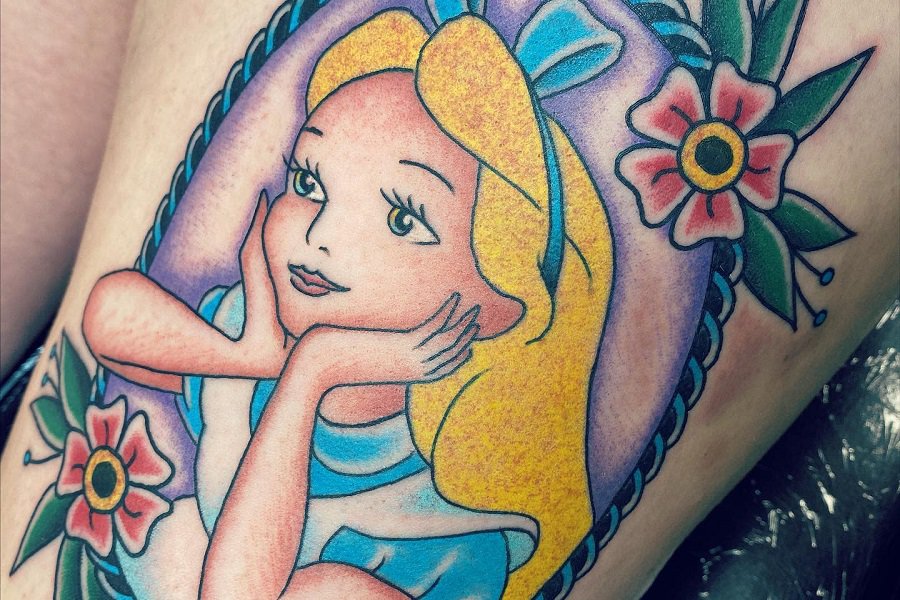 The story follows the adventures of young Alice who is drowsily lazing on the river bank with her sister, when she follows a talking White Rabbit down a rabbit hole into a fantastic world of bizarre creatures, strange customs and profound nonsense.

Carroll’s clever use of language and his ability to utilize illogic as a story telling device has made Alice in Wonderland popular among adults, while the illustrations and playful language allowed children to enjoy the story as well.

Analysis of Alice in Wonderland has reached scholarly levels thanks to Carroll’s fascinating incorporation of mathematic principles, powerful symbolism and linguistic gymnastics; academics continue to theorize on the story’s true meaning and the significance behind the multitude of characters.

These Alice in Wonderland tattoos are just a taste of what is possible with such a fascinating story as inspiration.

These associations with mushrooms led to psychedelic Caterpillar poster designs that could be found hanging in record stores and headshops around the country and this mind-expanding aesthetic can be found in some of these tattoos as well. Other tattoos in this collection use a black line approach that is more reminiscent of the woodblock lithographs that accompanied the original story.

Since she is the main protagonist it is little surprise that so many people choose the title character for the centerpiece of their Alice in Wonderland tattoos. The different approaches to Wonderland tattoo designs in this collection demonstrate how diverse and compelling tattoos can be with this unique story as inspiration.

Some of these pieces take the blonde depiction of Disney Alice to create Alice in Wonderland tattoos that are true to the classic animated film; others take this portrayal and add some markedly adult themes. An alt-rocker Alice complete with a Nirvana t-shirt and tattoos is on display in one piece, while another depicts Alice bound and gagged; there is even an Alice pinup girl in thigh high stockings. These Alice in Wonderland designs are great examples that use a variety of styles and approaches to produce compelling tattoos.

Black and gray work goes back decades. There is something about this approach that gives it a classic, timeless quality and these Alice in Wonderland tattoos perfectly demonstrate this enduring appeal.

From tattoo designs that are heavily influenced by the smooth shading and precise line work of Chicano tattooing to Wonderland tattoo designs that more closely resemble the original lithograph depictions with cross hatching and stipple work, these pieces are great examples of how well black and gray ink can be applied in a variety of styles.

Another character from the girl Alice’s adventures, the Cheshire Cat is one of the most popular subjects for Alice in Wonderland tattoos. This perplexing character is portrayed in a variety styles in these tattoos that draw inspiration from his various depictions throughout history, although his trademark grin is always present.

The tattoos in this gallery also use a variety of approaches-the watercolor tattoo style is particularly successful-to depict this bewildering and freewheeling character. For those that love Alice in Wonderland and the way this character continually baffles Alice, the Queen and her Court, a Cheshire Cat tattoo is the perfect choice.

The Mad Hatter and his strangely cyclical tea party provide great inspiration for Alice in Wonderland tattooing and the Wonderland tattoo designs in this gallery are great examples of what is possible with this illogical rascal as the subject.

Some of these Mad Hatter tattoos use Tim Burton’s re-imagining of Alice’s adventures with Johnny Depp’s deranged expression as inspiration. Others use a watercolor tattoo approach to depict the Hatter’s most essential feature: his hat.

Perpetually stuck at Tea Time (6:00 PM) and reciting nonsense poetry, the Hatter and friend the March Hare are considered mad even by the other characters in this fantastic and absurd world.

Neo-traditional work is popular for wonderland characters, incorporating classic tattoo elements like flower, daggers and skulls with intricate shape and bright color. The Alice in Wonderland tattoos in this collection are great examples of the neo style.

From ensemble Alice in Wonderland tattoos that stay true to the classic Disney Alice, to a bold and bright piece that is inspired by Alice in Wonderland’s sequel, Through the Looking Glass, a neo-traditional approach is a great choice for any subject.

The first of the strange characters that Alice encounters, the White Rabbit is a popular choice for Wonderland fans that want a permanent reminder of this unique fairy tale. Depicted in a waist coat with a pocket watch and constantly running late, the White Rabbit is another instantly recognizable character that makes great subject matter for Wonderland tattoo design.

The tattoos on display in this gallery utilize a variety of styles and approaches to depict this perpetually tardy rabbit. Some of the tattoos here use a vibrant color palette to recreate the White Rabbit from Tim Burton’s Alice in Wonderland, while others use black and gray to create photo-realistic portraits. Still other designs take a more abstract approach: one piece uses a few simple lines yet still manages to create an unmistakable rendition of the White Rabbit.

Instead of depicting any one character or specific scene, these Wonderland tattoo designs use a variety of approaches to create tattoos inspired by this one of a kind story. While many styles and approaches are on display in this collection, the watercolor tattoo designs are especially compelling when applied to this fantastic subject matter.

Other tattoos commemorate the wearer’s love of all things fantasy, with one tattoo using a clever composition and vibrant colors to incorporate elements from Harry Potter, Peter Pan and The Chronicles of Narnia. These Alice in Wonderland tattoos are great examples of what a talented tattoo artist can do with a classic story as inspiration.

What are the most popular Alice in Wonderland tattoo motifs?

The plethora of bizarre scenes and unique characters give Wonderland fans a lot of material to draw from when creating Alice in Wonderland tattoos, although there are some motifs that have become more popular than others.

For most people the strange characters in Alice in Wonderland provide perfect tattoo inspiration and one of the most popular of these is the Cheshire Cat. With his toothy grin, often depicted floating disembodied around the room, Cheshire Cat tattoos are a good choice for the potential they provide to incorporate other design elements into the piece.

The Mad Hatter and his “mad” tea party provide plenty of ammunition for compelling tattoo designs making this a common theme in Alice in Wonderland tattoos.

The White Rabbit is a popular choice thanks to his instantly recognizable visage, perpetually hurried, coat tails flapping and pocket watch ticking away. The hookah smoking caterpillar is another character that has become increasingly popular in Alice in Wonderland tattoos. Sat on a mushroom, puffing on a hookah, the Caterpillar’s quintessential phrase, “Curioser and curioser” perfectly sums up the illogical theme that runs throughout Alice’s adventures.

Finally, Alice herself is a popular subject for Wonderland tattoo designs. Many people choose to portray Alice as she was depicted in the Disney adaptation of the story, often adding incongruent elements to create more compelling designs.

Why do people get Alice in Wonderland Tattoos?

People choose to get Alice in Wonderland tattoos for any number of reasons, although for many art enthusiasts Alice’s adventures symbolize their love for the bizarre and irrational aspects of life. This interest in the illogical has other associations thanks to a song released in 1967.

Alice in Wonderland reentered the cultural lexicon in the 1960’s thanks to Jefferson Airplane’s hit White Rabbit introducing the story to a new generation and adding a variety of more modern connotations, notably within the world of psychedelics.

The Caterpillar in particular has gained direct association with drug use thanks to the fact that he is sitting on a mushroom and the way Alice’s size changes when she eats the fungus. Many people have theorized that Carroll was alluding to drug use as a way to alter perception, although this is unlikely.

The truth is that this fascinating story means a lot of different things to different people and while the motivation behind Alice in Wonderland tattoos may vary, exciting Wonderland tattoo designs are a great choice for anyone that connected with this one of a kind story.

Did you enjoy these Wonderland tattoos ideas and designs inspired by Disney’s Alice? Maybe you fancied Tim Burton’s Alice? If you are looking for more tattoo inspiration checkout the links to more tattoo art galleries below: