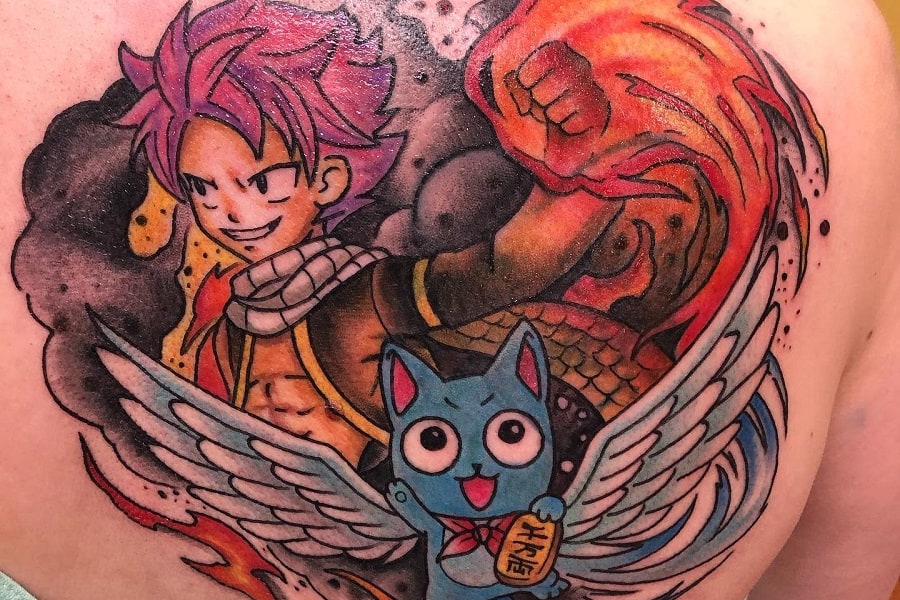 Fairy Tail is a Japanese graphic novel in the manga style taking place in the fictional world known as Earth-land, where guilds of wizards offer their powers and services for the right price.

Manga (commonly referred to as anime outside Japan) has spread far beyond the confines of a strictly Japanese audience, and Fairy Tail is no different, with fans across the world looking to get permanent reminders of their love for Fairy Tail and it’s collection of cool characters.

With the original 545 chapters running from 2006 until 2017, Fairy Tail has millions of fans around the world and inspired a number of spinoffs as well as being licensed in several English speaking countries like the United States and Australia.

The main character in the Fairy Tail series, Natsu Dragneel is a dragon slayer wizard from the Fairy Tail Guild in search of his adoptive father, the dragon Igneel.

Read on for a selection of interesting and unique ink drawing inspiration from Fairy Tail.

Many people choose to go with a black and gray approach for their tattoos, and for good reason. Black and gray work has a classic sensibility that is hard to achieve with bright colors; black and gray also tends to age better and doesn’t suffer from noticeable fading the way color tattoos do.

Besides these broader reasons, many people choose black and gray for their manga tattoos because it more accurately reflects the animation: unlike many Western graphic novels, manga is almost always created without the use of color ink. This means that these black and gray Fairy Tail tattoos are much closer to the actual images depicted on the pages of comic books.

It isn’t surprising that many people choose to apply Fairy Tail tattoos in a cartoon style considering the animation used to tell the stories. Featuring their favorite characters in a variety of settings and performing actions pulled straight from the manga and then applied in an illustrative style and utilizing color ink, this collection is a great example of what is possible with a talented artist and thousands of exciting images to draw inspiration from.

Within the Fairy Tail universe there are magic keys that exist and can be used to summon beings from other dimensions. Celestial Spirit Gate Keys allow mages to open portals to different dimensions and bring beings to Earth-Land to fight for them, do chores or just for company. These magical keys are important elements within the adventures of Natsu and his team and many fans choose them as tattoos.

Another reason these make such great tattoos is because to the casual observer they appear to just be ornate keys, but to another Fairy Tail aficionado these keys are a covert nod to a shared passion for this unique manga.

While it is true that most manga are originally depicted without the use of color, tattoos are about self-expression and many people choose to add vibrant colors to their Fairy Tail tattoos in order to create designs that better fit with their personal style. Plus they look really cool. Many of these pieces recreate scenes from the epic battles and magic journeys of Natsu and his band to great effect, showing off just how successful these anime designs can be when applied by a talented tattoo artist in bright color ink.

While some people may choose to get a Fairy Tail tattoo of their favorite character or an action scene complete with fire and dragons, other people want tattoos of the entire cast of characters from this magic series. These pieces create interesting compositions by including a variety of characters and use bright color ink to help the details in these clean tattoos pop.

In the world of Fairy Tail, the fighting is not left up to the men and dragons. In fact, Ezra Scarlet is a key character providing some of the most impressive magic firepower for Team Natsu and she is the strongest ‘girl‘ mage in the entire Fairy Tail Guild.

As her name implies Scarlet has bright red hair, and is a formidable woman in battle. Many people choose to use vibrant colors in their Ezra tattoos for the fantasy aspect, although her fierce beauty translates equally well in black and gray.

Each of the different Guilds in the world of Fairy Tail have their own unique emblem. Unsurprisingly many fans choose to get this pictogram inked on their bodies. Utilizing a variety of different styles, this collection is a great cross section of what a talented tattoo artist can do with this unique shape and the dramatic stories of Fairy Tail as inspiration.

Happy the Blue Cat is an omake, or extra character, in Fairy Tail that was instantly popular upon his addition to the series. Introduced to the story in 2011, Happy was dedicated to the survivors of the Tōhuko earthquake and tsunami of the same year.

As his name implies, Happy the Blue Cat is always happy, a condition that played into his early character development and endeared him to readers of Fairy Tail. These pieces are great tributes to this happy go lucky cat.

Out of all the different elements that produce a tattoo, the single most important aspect that makes a successful tattoo is the line work. While the color and shading in a piece can elevate it to an exceptional level, without clean and consistent line work it won’t stand up to the test and will most likely turn into an amorphous blob. These Fairy Tail tattoos demonstrate that, with expert line work, a talented artist can create compelling pieces without color or elaborate shading.

What is the Fairy Tail Symbol?

Each of the different Guilds in the world of Fairy Tail have their own unique emblem. Unsurprisingly, many fans choose to get this pictogram inked on their bodies.

The main character in the series, Natsu Dragneel is a dragon slayer wizard from the Fairy Tail guild in search of his adoptive father, the dragon Igneel.  The Fairy Tail Guild emblem is a stylized fairy with pointed tail.

Fairy Tail is a Japanese graphic novel in the manga style taking place in the fictional world known as Earth-land, where guilds of wizards offer their powers and services for the right price.

The popularity of the fairy tale series is such that it has spawned all sorts of custom merch such as unique hoodies, nalu matching outfits for your cosplay idea, great outfit costumes, cool stickers and temporary tattoo, and even weirder items such as a large anime carpet!

Natsu, with the help of his cat-like partner Happy, embark on a number of journeys where they meet and join forces with wizards from different guilds including an ice wizard, magic knights, and a variety of other fantasy characters.

Battling dark forces and subduing criminals, the dragon slayer and his misfit band embark on a variety of battles and continue their adventures in Earth-Land.

Did you enjoy these Fairy Tail Tattoo examples? For more awesome anime galleries click on the links below to wxplore: