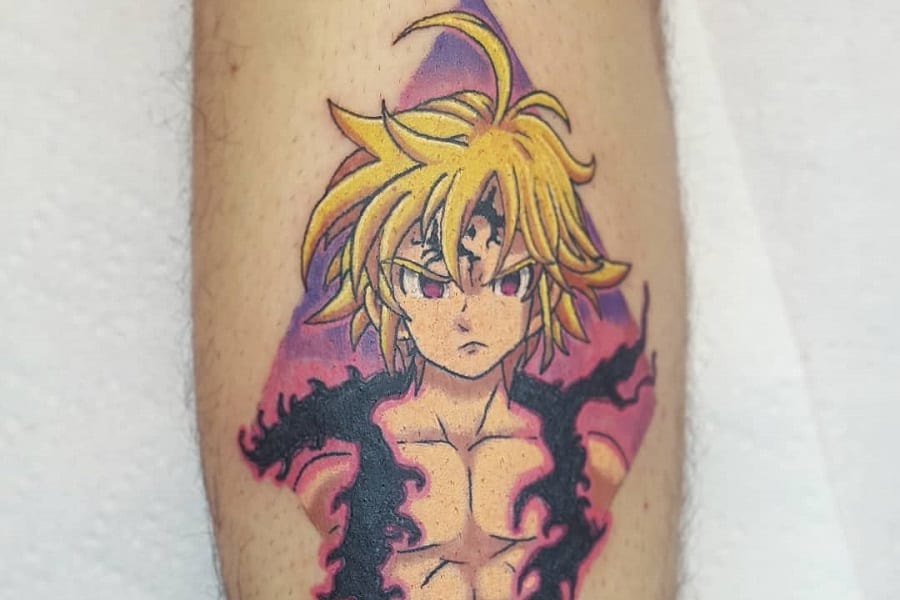 For millions of people around the world the Japanese comics known as manga provide endless entertainment and one of the more popular of these animated stories is Nakaba Suzuki’s The Seven Deadly Sins.

Taking place in a fictionalized world similar to Medieval Europe, The Seven Deadly Sins-known as Nanatsu no Taizai in Japanese-follows an eponymous band of knights who were falsely accused of planning a revolt and were summarily exiled from Britannia.

Ten years later and the Seven Deadly Sins are holy knights on a quest led by the knight Meliodas to defeat the evil demon forces, restore order, their pride, and clear their names.

In addition to cosplay and anime fan fiction, most manga art enthusiasts are choosing to memorialize their favorite characters and franchises with unique tattoos. The Nanatsu No Taizai – Sloth, Gluttony, Greed, Lust, Wrath, Pride, and Envy – provide plenty of material for interesting tattoos.

Meliodas tattoo designs in particular are a popular choice for The Seven Deadly Sins fans thanks to his strong and complex character traits and the exciting role he plays in this unique anime series.

Black and gray tattoos go back all the way to the beginning of the art form and this understated style remains popular today thanks to the classic effect created by a monochromatic approach. Given the bright colors of the anime television series, some people may be surprised that many fans choose black and gray for a Meliodas tattoo. However, this approach is more appropriate than one may think.

Like most manga, The Seven Deadly Sins was originally published without color and many art enthusiasts choose tattoo designs that remain true to this initial depiction. These excellent Seven Deadly Sins tattoos demonstrate just how successful black and gray work can be when applied to exciting anime characters.

Despite the original story being printed in black and white the subsequent release of The Seven Deadly Sins anime television series brought color to the fantastic land of Britannia. Known for his scruffy blonde hair, green eyes and Dragon Handle sword, Melodias tattoo designs provide artists with a variety of opportunities to incorporate color, as well as elements of the worst sinners.

Several of these tattoos also depict Melodias in his demon form, with dark eyes and a fierce countenance and use the Dragon’s Sin of Wrath symbol to create a border and improve the overall composition.

Tattoo artists are always pushing the boundaries of their medium and the level of skill that is on display in these Seven Deadly Sins tattoos is next level. Strong outlines, fully saturated colors and balanced compositions set these designs apart from other anime tattoos.

By staying true to the original animation from the television series and focusing on small details, these tattoo artists produce Meliodas tattoo designs that will turn heads for years to come.

4. The Dragon’s Sin of Wrath Symbol

While some people prefer their tattoos dedicated The Seven Deadly Sins to be straightforward recreations of the exciting characters at the heart of this unique story, others prefer a more ambiguous design. The tattoo artists here use bold outlines and vibrant color to reproduce Meliodas’ crest, the Dragon’s Sin of Wrath symbol.In the original manga and later on in the anime series, Meliodas is depicted with this symbol tattooed on his arm and for many die-hard Seven Deadly Sins fans this is the ultimate show of dedication to their favorite character.

It is also a design that many choose because of the knowledge required to recognize it: anyone unfamiliar with the series isn’t likely to know this symbol but for other fans the importance of the Dragon’s Sin of Wrath design is instantly recognizable.

Once again we see Meliodas tattoos that draw inspiration from the original manga series, eschewing color (mostly) in favor of a more simplified approach. Using bold lines and an intelligent understanding of composition, these tattoo artists create Seven Deadly Sins tattoos that capture the fierce and loyal characteristics Meliodas is known for.

What does a Meliodas tattoo represent?

Prior to his transformation into the leader of the Nanatsu No Taizai – Sloth, Gluttony, Greed, Lust, Wrath, Pride, and Envy –  Meliodas was a fearsome and vile demon with many vices, so feared that no challenger would face him as the heir apparent to the Demon throne.

After his time in Purgatory Meliodas returned a changed person, although he remained fearless in the face of enemies and retained his colossal power.

As former owner of the renowned Boar’s Hat tavern and later becoming leader of the holy knights comprising the Seven Deadly Sins, Meliodas is admired for his frank demeanor and selflessness: he is often shown helping those in need despite the trouble it may cause for him.

These positive character traits-along with the immense power he controls due to his demon heritage-make Meliodas tattoo designs a popular choice for devoted fans who fell in love with this unique manga.

What was Meliodas’ greatest sin?

Meliodas is also known as Dragon’s Sin of Wrath and he is the leader of The Seven Deadly Sins and the main protagonist in the anime’s intricate plot.

Originally a member of the Demon Clan’s Ten Commandments, Meliodas is over 3,000 years old and was the most feared demon and heir to the Demon Throne. Most argue his greatest sin, and the reason he became known as Dragon’s Sin of Wrath, came about when he flew into a rage after seeing his lover, Liz, murdered before his own eyes in an attack by the demon Fraudrin.

Losing control of his immense power, Meliodas destroyed the entire kingdom of Danafor, earning him his title as Dragon’s Sin of Wrath and setting in motion a series of events that would continue to shape the future of Britannia for years to come.

Later in the series Meliodas expressed guilt over the incident and many fans speculate that his greatest sin was his inability to save the city.

Did these Meliodas tattoos give you an idea for your next tattoo? Clickon the links below for more ink galleries with a focus an anime: