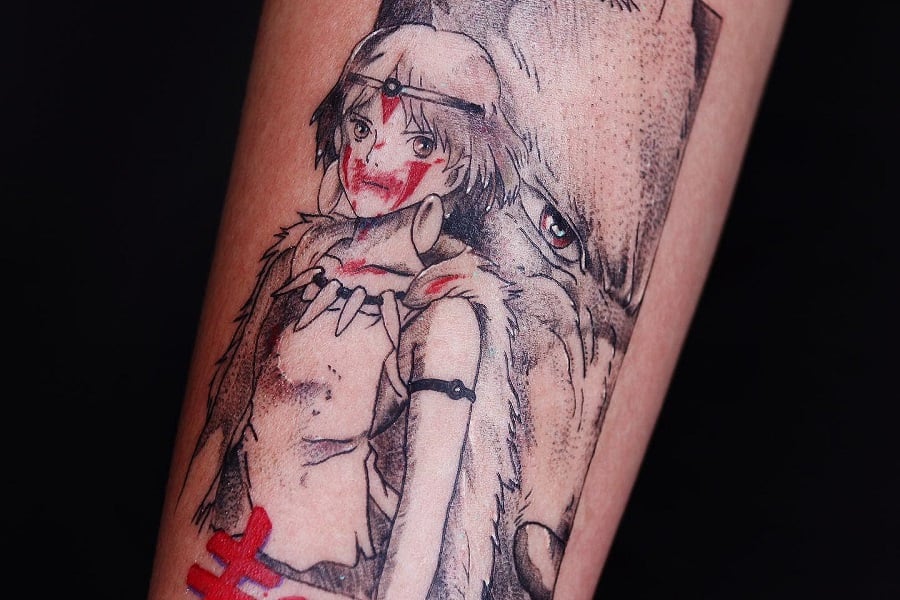 Studio Ghibli animation and film studio released Princess Mononoke to US audiences in 1999.  The critically acclaimed feature is a standard bearer for award winning director Hayao Miyazaki on the world stage and popular choice for vivid, innovative displays of tattoo art.

Princess Mononoke centers on the adventures of the noble Prince Ashitaka as he journeys to the west to undo a deadly curse inflicted upon him by Nago, a boar god turned into a demon by the Lady Eboshi. Young Ashaitaka’s curse manifests as a worm of evil centered in his arm.

On the way, Ashitaka’s curse worsens, and he stumbles into a war between the proud people of the Iron Town human outpost – led by the industrious Eboshi – and the creatures living in the sacred depths of the great forest, led by the great white wolf god Moro and warrior San

San is the enigmatic Princess Mononoke, a young girl raised by the Wolf God Moro who will do everything to prevent the humans from destroying her forest home, the forest god and animal spirits living there.

Princess Mononoke is the epic masterpiece that catapulted the legendary Studio Ghibli into the West’s collective consciousness. The epic story and beautiful animation created a legion of passionate fans, paving the way for Howl’s Moving Castle, 2002 Academy Award winner Spirited Away, and My Neighbor Totoro.

With it’s amazing into human character and motivation, memorable animal and supernatural characters, exhilarating battles, haunting visuals, and adult subject material tackling the environment, capitalism, and disability, Princess Mononoke has provided the opportunity for brilliant tattoo design in a range of styles, colors, and technical approaches.

Read on for brilliantly etched examples of bloodthirsty and cute pop culture tattoos from Princess Mononoke.

The delicate fine lines and framing are reminiscent of classic manga, branching to more individuality in the Kodama piece’s use of brash blue background color, or anime style delivery of flat, well-chosen color palettes. The delicate linework in other featured tattoo designs allow the deft work to shine without needing to be overcomplicated.

The massive color sleeve tattoo is an epic masterpiece featuring wondrous color use, and smartly delivered sections for major characters such as San, Prince Young Warrior Ashitaka’s elk Yakul and the Kodama, is a piece that true tattoo art enthusiasts can enjoy.

Color may be bright and exciting, but there are some Princess Mononoke tattoos that need black and gray to fully stretch out the technical skillset!

Moro is the 300 year old Wolf God who adopted the child San when her parents sacrificed her to get away from the attacking creature. The name San is in reference to her being the third child of Moro. San often rode her into battle against the humans of Iron Town, whom she hates passionately yet respects. Moro wants nothing more than to crunch off the business-like Lady Eboshi’s head.

These tattoos featuring the young girl and wolf do brilliant work capturing elements of their parent/child relationship. The artists have been etched tattoos that show breathtaking imagination – the capability for violence and blood but also deep humanity, care for the forest, love and protection they show for each other.

In Japanese mythology, the Kodama are kindly forest spirits who live in trees. When they are plentiful in number it is a sign that the forests are in great health. In Princess Mononoke the forest spirits are depicted as small white creatures – in opposition are the black soot sprites that crop up in abandoned homes and dwellings in Spirited Away.

The Kodama tattoos in these examples are all drawn in black outlines and filled with negative space. It’s their surroundings and situations that create awesome tattoo design, with wildly different colored fills contrasting with tattoos etched purely in black linework or deftly drawn fine line.

Plenty of people in the world of cosplay have donned San’s mask for an event or party. Outside of the Kodama – and San herself – it is Princess Mononoke’s most recognizable image, perfectly round, red striped and featureless.

These tattoos are tremendous. I especially like the contrast of a masked Princess San armed to the teeth against the beautiful blue color of flowers, and the sense of humor of the wearer opting for a mask and kodama combination. Other pieces go for linework depictions, full color, and even heavily black shadowed fill to depict their ink.

The use of neo traditional style fits the deployment of different aspects in these tattoos. I especially like the multi antlered head of the forest spirit etched and surrounded by surprisingly restrained colors.

Tattoos featuring San’s spear, or her face surrounded by bright flowers or animal gods from the great forest, fit right in with the technical specs usually found in tattoos of this style. The use of vivid, highly saturated color – a fautre shared by Japanese animation and tattoo – thick black defining outlines and shapes, and lack of gradient shading across these features are all hallmarks of new wave tattoo.

Each tattoo of San utilizes a different style to bring her features to life, whether it’s classic color or black and gray manga, anime portraiture, or a realism bent reminiscent of traditional native American features.

There’s significant variation in the type of lines, veering from straight and true to calligraphic hair and shape line accents, while each piece deploys the important red ink with an excellent sense of splashing style to bring the enigmatic Princess Mononoke to life.

This final group of tattoos clearly have focused on their technical style as much as on their sense of delivery. I particularly enjoy the final tattoo’s use of heavy black ink balanced against the smudge of red in San’s mask.

The flowing ink – whether in fine needle long strokes, short hatches and crosses, or the much heavy outline work – draws on the excellent technical skills of each artist depicting scenes of the Forest God, San and Moro the wolf.

What does Princess Mononoke mean?

You could be forgiven for thinking that Princess Mononoke refers directly to a person, like Prince Harry or Prince Fielder. However, the term Mononoke is not a name but the Japanese word for a spirit or monster. A mononoke is a supernatural shapeshifting being – more human in aspect than the Oni demon or Kitsune animal spirit, and one of the many mythical creatures central to Japanese folklore.

Part of the confusion surrounding the film’s title also lies in the translation of the Japanese title Mononoke Hime, into the English language Princess Mononoke. There’s not really a way to translate the title’s nuance simply, and of course English Subtitles for a title such as this don’t help.

What is Studio Ghibli?

Studio Ghibli is one of the best loved animation studios in Japan and home to some of animated film’s most highly regarded titles. Under the stewardship of acclaimed director and animator Hayao Miyazaki, Studio Ghibli film is responsible for the 2002 Acadamy Award Winner Spirited Away, My Neighbor Totoro (Japan loves it’s mascots, and the Studio uses Totoro is its chief totem), and Howl’s Moving Castle among many quality titles in addition to Princes Mononoke.

Did you enjoy these Princess Mononoke tattoos? Click on the links below for more galleries of inspiring anime and Japanese themed tattoo art.