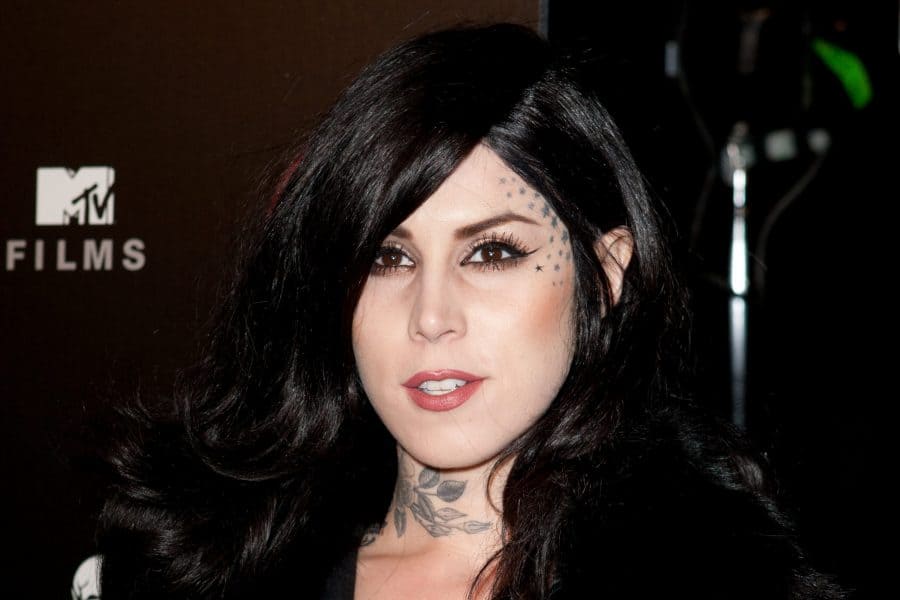 A talented tattoo artist most famous for her role on TLC series Miami Ink and LA Ink, there is much more to Kat Von D than just a TV show.

In our current world of reality TV, social media influencers and viral videos fame is within reach of everyone, from video game bloggers to tattoo artists. One of the most famous and successful of these is Kat Von D, who went from inking cool body art in a tattoo shop to superstardom and celebrity.

Kat Von D‘s career outside tattooing includes fame as a television personality, authoring several books, singing on a number of rock and roll tracks and launching a successful –and controversial—makeup line. A savvy entrepreneur and skilled tattoo artist, Kat Von D continues to blaze a trail for powerful and unapologetic women in the industry. 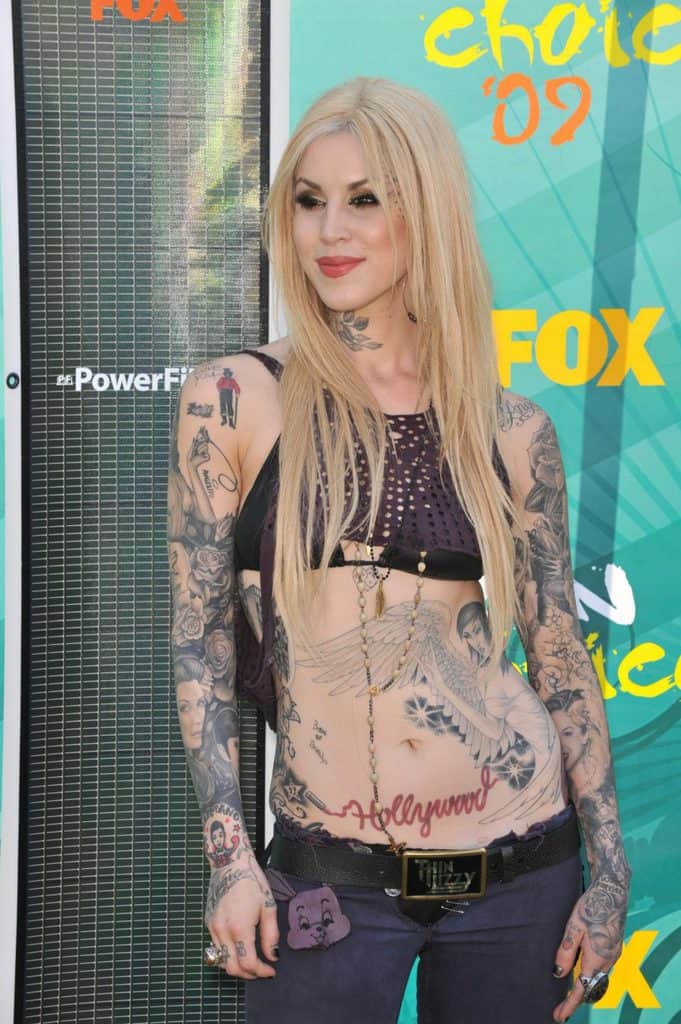 Born in Mexico but moving to Los Angeles with her family at four years old, Kat began came to ink at an early age, getting her first tattoo at age 14 and quitting school two years later to pursue her career as a tattoo artist. Cutting her teeth tattooing in LA and Hollywood, Von D was influenced by her Latino heritage and punk rock, finding connections in these cultural movements with deep roots in Southern California.

The nation got their first real look at Kat as a reality star on the TLC series Miami Ink when Von D joined the crew, filling in for another injured artist. After two seasons Kat left Miami due to creative differences and returned to her home of Los Angeles where she eventually landed her own tattoo show, La Ink.

In 2007 Kat set the Guinness World Record for the most tattoo applied in 24 hours—400—cementing her place in the world of tattoo fame. She also features on numerous covers of tattoo industry bible Inked Magazine. 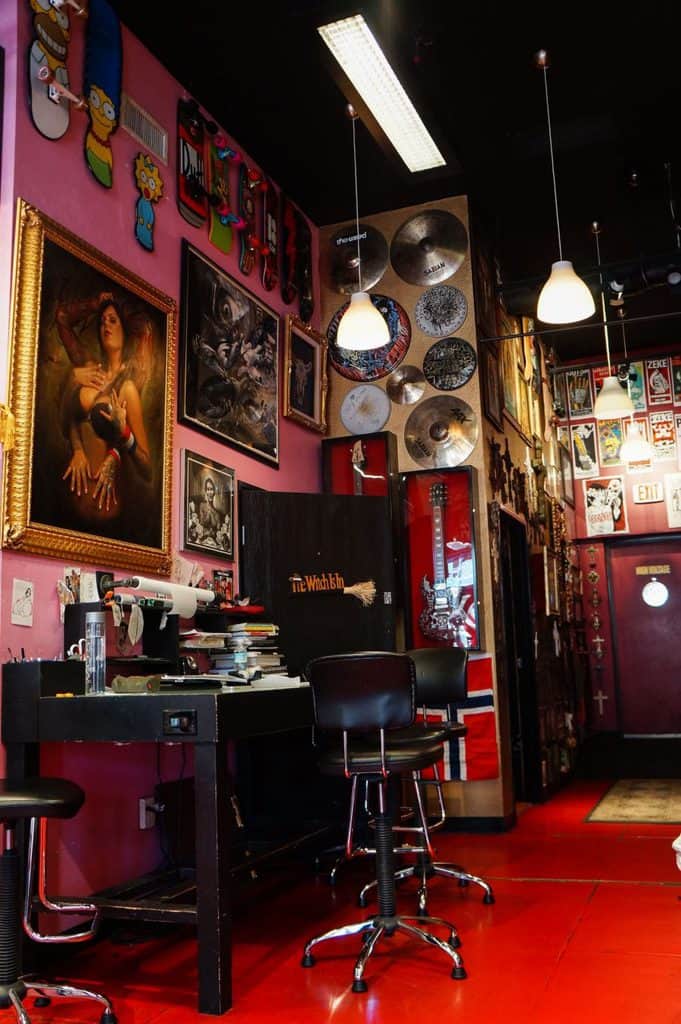 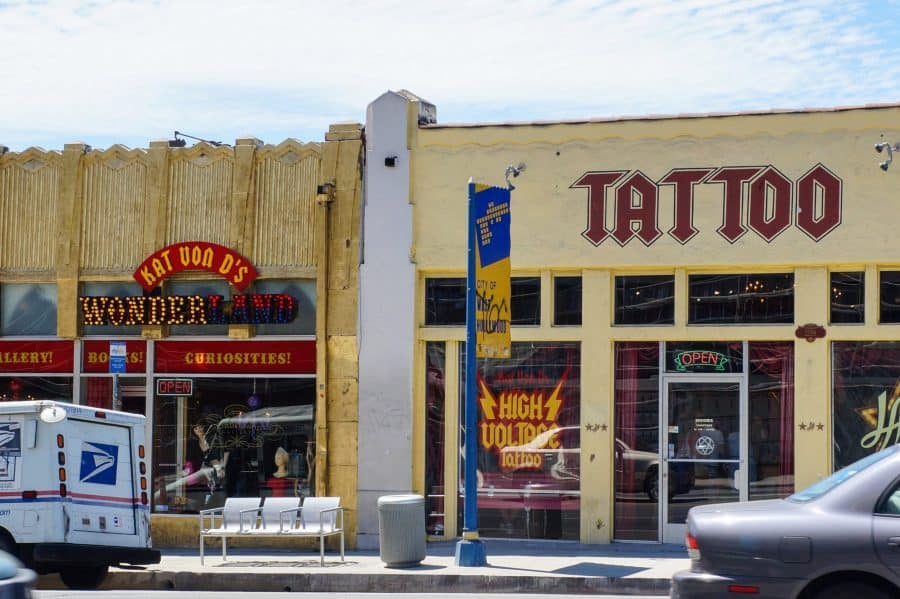 Growing up in Los Angles in the 1990’s and having a Latino background, it is unsurprising that many of Kat Von D‘s tattoos—both the ink she wears and the tattoo art she creates in the shop —draw heavily on the Chicano tattoo tradition. Known for clean black and gray work with an emphasis on smooth shading and striking portraits, Kat takes this classic style and puts her own spin on it.

Like many tattoo artists, Kat has countless tattoos. Some of her largest and most prominent pieces speak to her upbringing in Los Angeles. She sports a number of black and gray portraits that are typical of the Chicano style as well as a half sleeve tattoo of excellent black and gray roses. Across her shoulders she has the Chicano adage “Mi Vida Loca” in elaborate cursive script, a commemoration to the wild times in her crazy life.

Another bad ass piece is the blackout tattoo on her left forearm – a type of body art where the entire piece is filled in with solid black ink. It covers most of her forearm and pevious work but isolates other previous Kat Von D tattoos into a triangle surrounded entirely by black ink.

She told Instagram when revealing the body art: “I’m so in love with my new blacked out arm tattooed by @hoode215! Can’t believe it only took him 1.5 hours – and it’s the most consistent, true black I have ever seen!”

As is the case for many a famous person showing off their tattoos on social media, Kat Von D was lauded by some for the dream tattoo but also blasted by others, with the nicest insult calling the blackout tattoo a blurry mess.

The excellent quality of her tattoo work did not escape the attention of celebrities – being talented and being a television personality in LA has it’s benefits! Kat has one of the most star studded resumes of any contemporary tattoo artist. Once again, her clean line work and precise shading are at the center of her work and many celebs have chosen Kat to apply her trademark style to their bodies. Her love affair with music is no secret which has prompted many musicians to seek her out because of the connection they share.

Before Lady Gaga was a household name, she came to Kat to get some ink. While the soon-to-be star had high hopes Kat wasn’t so sure. “’What are you all about, your music and stuff?’ And she goes ‘I’m here to make it huge. I’m going to make it big.’ She’d just moved to LA and I was like, ‘Yeah, yeah, you and everyone else.’ I didn’t say that, but cool, whatever happens. I swear, like three days later her face was everywhere. But man, she did it. It was really cool to see that.’”

Besides Gaga, Kat has tattooed departed rock legend Lemmy, super star rapper Lil’ Wayne, Slim Shady himself, Eminem, Red Hot Chili Peppers Dave Navarro and Anthony Keidis, Miley Cyrus, and R&B royalty Mary J. Blige. It seems like everyone that is anyone in the music business has sat in Kat’s chair for their own tattoos at either Kat Von D‘s Wonderland or High Voltage Tattoo in West Hollywood.

Along the wild ride that was Kat Von D’s journey into the public eye and eventual position as a beauty and makeup mogul, she released two books documenting her life in the tattoo industry. High Voltage was released in 2006, and featuring a forward from Motley Crue’s Nikki Sixx her first book reached number 6 on The New York Times’ Best Seller List. In a 2009 she described the book as “not an autobiography, you know, ’cause I’m too young to do that. But this is just kind of like a picture-driven outline of my career as an artist.”

Her second book, 2010’s Tattoo Chronicles, was an illustrated journal accounting a year in her life which reached number three on The New York Times’ “Hardcover Advice & Misc” bestseller’s list.

The Birth of a Makeup Mogul 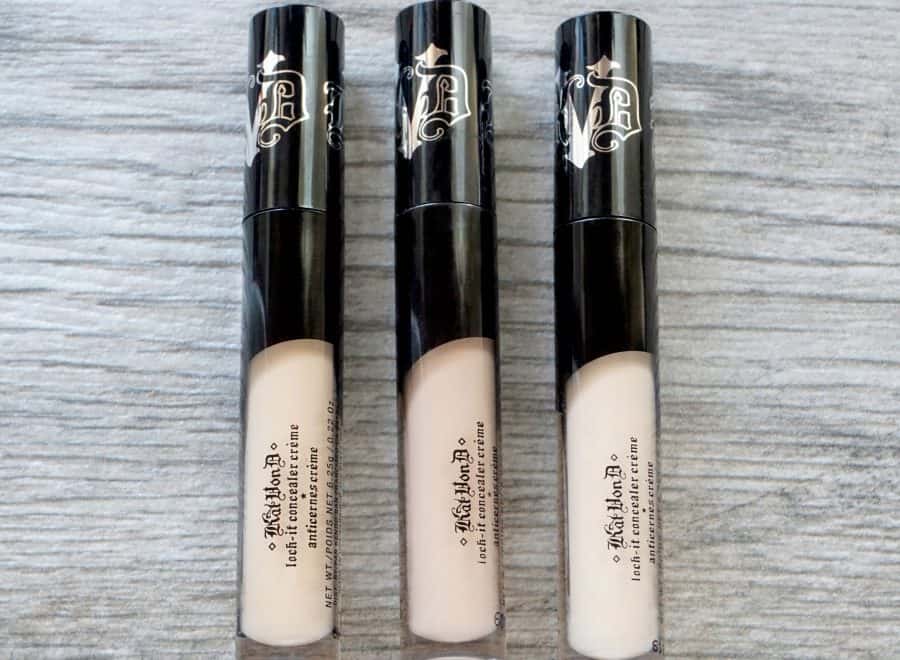 It was from this position of celebrity artist that Kat launched the first of many business ventures breaking the bounds of tattooing, with a focus on makeup and beauty. In 2008 Kat started what would become a 12 year relationship with makeup company, Sephora, with the launch of the Kat Von D for Sephora brush set. The kit featured lipstick, eyeliner, eyeshadow, and a custom brush set.

Her own personal style, with sharp, cat eyeliner wings and bright red lipstick, caught the eye of many in the world of fashion and her dedication to her precise appearance drew many admirers and helped to launch her makeup line.

Fans of her tattoos also gravitated to her makeup line thanks to the way she “painstakingly micro-managed” every element in the process of bringing her product to the marketplace. In fact, according to an interview there are direct connections between her first artistic passion and her process for designing and marketing her makeup:  “I treat it like a tattoo, taking into consideration the muscle structure and seeing where the line lands on the existing body.”

A Plant Based Revolution

Shortly after she saw the film Kat transitioned to a fully vegan diet, but for Kat, the change went beyond food. Her participation in the makeup industry—notorious among animal rights advocates—brought the reality of using animal based ingredients in her makeup line front and center, and Kat couldn’t stand idle.

In 2016, after more than a year of working tirelessly with Kendo Brands (the business incubator that created Sephora), the Kat Von D Beauty brand was reformulated to be 100% vegan.

Since her transition to a plant based, vegan lifestyle, Kat has continued to incorporate her world view into other business ventures. On International Vegan Day in November of 2019, Kat unveiled her own brand of footwear, Von D Shoes. Completely animal free, the two styles on offer—the Slayer boot and witchy, Coven I—both sold out within minutes, hinting that Kat may have been on to something with her animal friendly footwear. 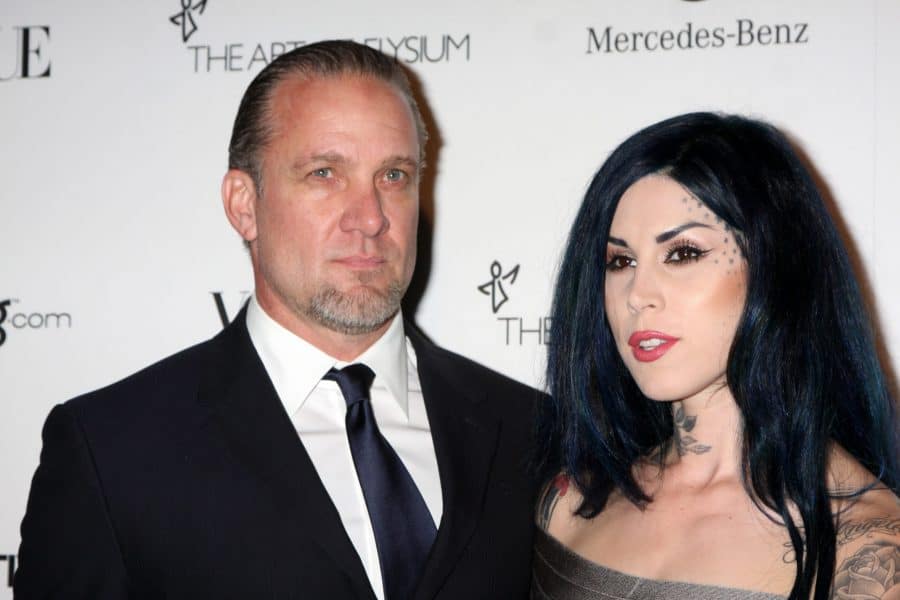 Artists are not known for conforming to society’s norms and restrictions, and, unsurprisingly, Kat Von D is no stranger to controversy.

One black cloud that has continued to follow Kat around are accusations of anti-Semitism stemming from her relationship with bad boy motorcycle builder Jesse James.

While she denied knowledge of his unsavory interests – which included collecting Nazi paraphernalia – further accusations followed the release of a lipstick color named “Selektion” a term that has direct ties to the Holocaust and the selection of those that would work and those that would be executed. Kat has caught flack for other makeup names, including “Underage Red” lipstick and a “promotion for he”Lock-it” concealer that featured a dark skinned hand holding the product in front of a cotton field. 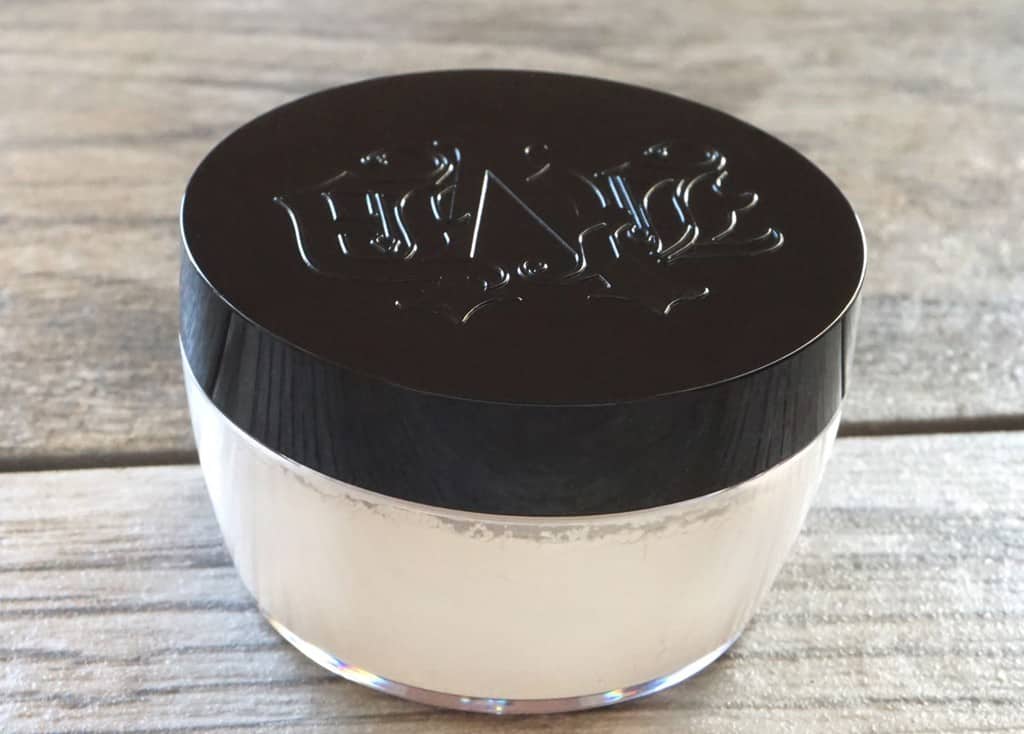 In January, Kat used her Instagram account, to inform the world that she would be walking away from the KVD makeup venture and selling all of her controlling stock to Kendo.

Kendo have rebranded the makeup line as KVD Vegan Beauty, and while they maintain Kat’s dedication to an animal free product they will be changing some things, notably the name. “It does NOT stand for a person’s initials,” the brand said via Instagram. “KVD Vegan Beauty represents our ethos and new manifesto. We believe in Kindness, Vegan Beauty + Discovery (and Doing good)”. This, along with a dedication to environmental responsibility, falls right in line with Kat’s values and beliefs.

While some fans may be dismayed by this change, Kat assured her followers that she is moving on in order to focus on her other projects, and remain active with the tattoo gun.

“This past year has been one of great change for me. As many of you know, I gave birth to my beautiful baby boy, launched my vegan shoe line, and am now busy prepping to release my long awaited album in the Spring, followed by an international tour!”

Kat Von D has been an inspiration for woman around the world to follow their dreams and stay true to themselves, showing women that even in the traditionally male dominated tattoo industry, hard work and determination pay off.