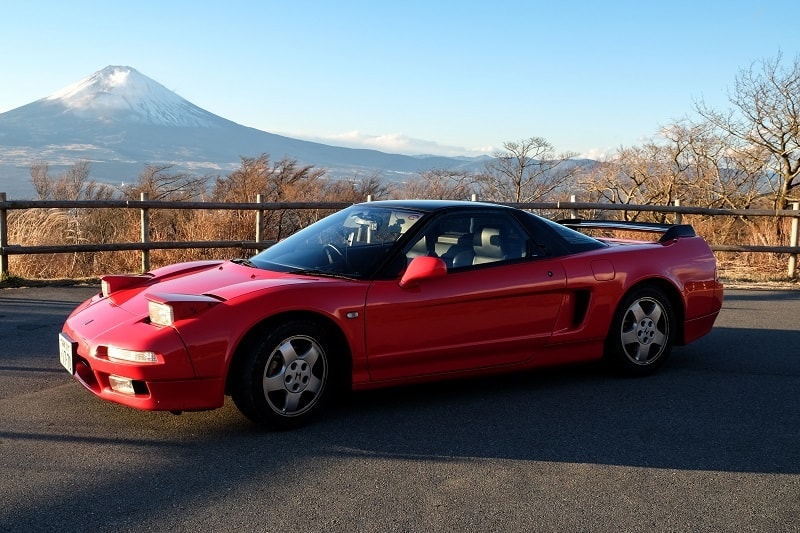 90s nostalgia is hitting new heights and that includes looking back at the best cars from the decade. It was a golden period where many companies brought out vehicles that have come to define them.

It was also a time of cultural revolution, especially with video games such as Gran Turismo, which came out in 1997. There were also films such as Gone in 60 Seconds that came out in 2000 and paid homage to many of the cars from the previous decade.

It means there is a whole generation that looks back at cars from the nineties with great affection. This is why we wanted to see which were the 10 best sports cars of the decade.

These are cars you’ve probably used in games, seen on film, and some of you might have been lucky enough to drive in real life. Let’s jump right in and see which cars made the cut! 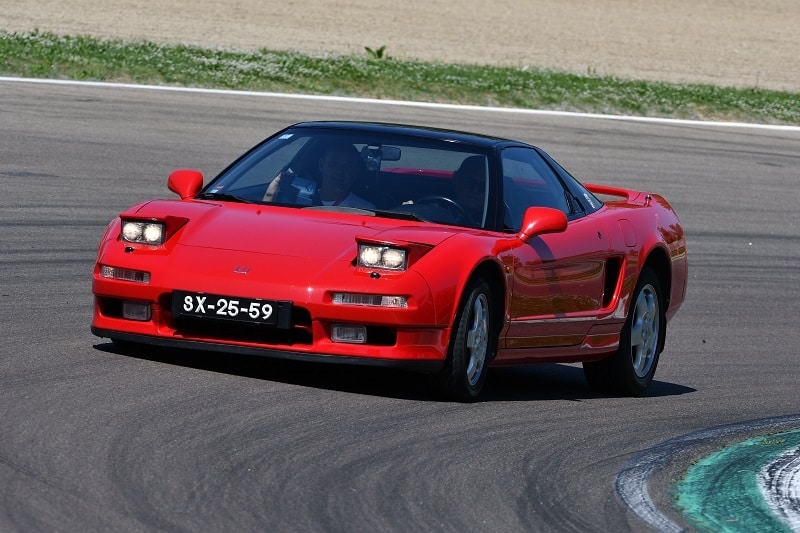 At the turn of the decade, Honda wasn’t exactly known for creating supercars. When they revealed the NSX, people were shocked. It was a bold move from the company and one that paid off spectacularly.

That was possible due to it being designed with the help of the great Ayrton Senna. The result was a truly fantastic car with a 3.0-liter engine and a powerful V6. This wasn’t a sensible economy car, it was a finely tuned beast.

As with everything Honda makes, it was engineered with precision. It was light and fast with an exceptional gearbox which helped to give the car an excellent feel and response.

It perhaps didn’t have the raw look and aggression many people love in a supercar but it has stood the test of time. It made great leaps in automotive engineering and helped pave the way for everything that came after. 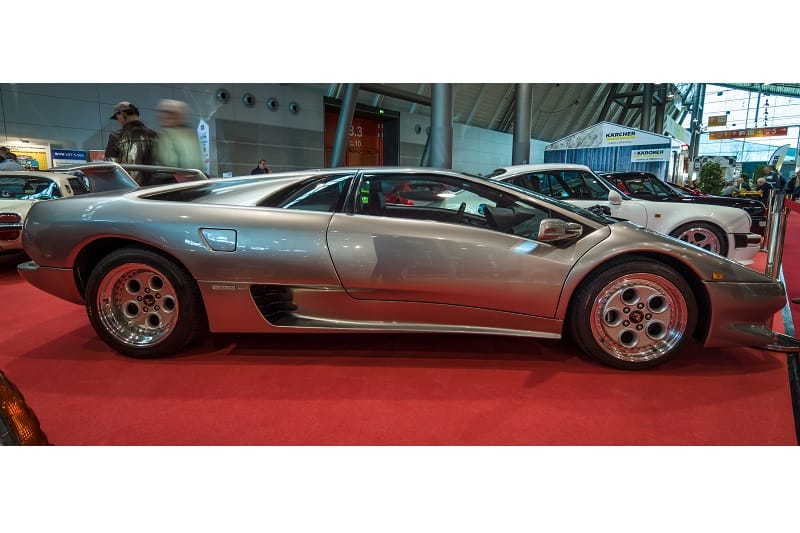 When talking about the NSX, we mentioned a lack of aggressiveness in its design. In that respect, the Diablo is the antithesis of it. There is something unmistakably Lamborghini about its design, which had evolved from the Countach that came out in the 70s.

A lot was expected of the car and it was instantly popular. You couldn’t help but fall in love with its shape and those iconic doors, which swung up. While Honda went practical with their design, Lamborghini never seemed to care.

If you were a kid who loved cars in the 90s, you probably had a model of this car and/or a poster of it up on your wall. The company continued its fine tradition with the Murciélago but there’s many of us who will always have a soft spot for this 90s classic. 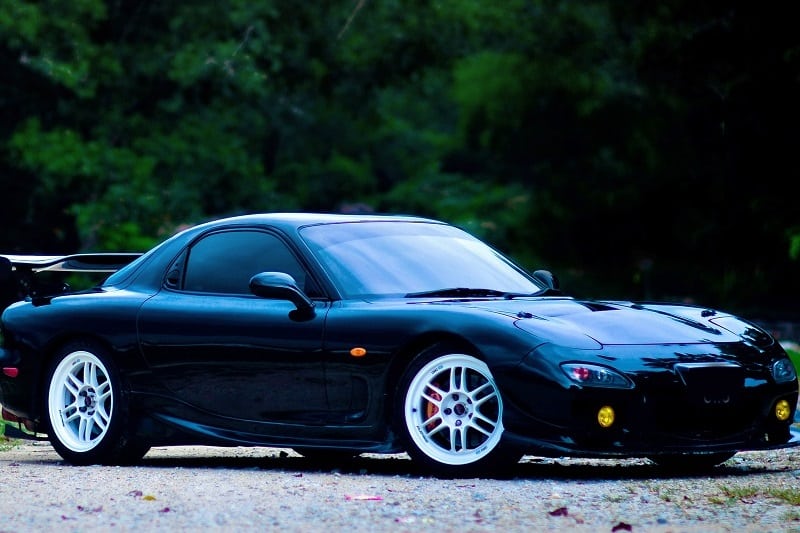 Going into the 90s, Mazda was riding high from the Miata (called the MX-5 in Europe) which they’d released in 1989. They soon turned their eyes to the next generation of a car they first released in 1978, the RX-7.

In 1992, they completed work on the 3rd generation. It was a light and nimble car that was incredibly fun to drive. That was as long as you fit inside, as the narrow wheelbase made it a tight squeeze.

It featured a five-speed manual gearbox and packed a punch at 255 hp. It became a beloved car for many reasons, including those who loved street races and drifting. It may have only been small but it was mighty in terms of performance. 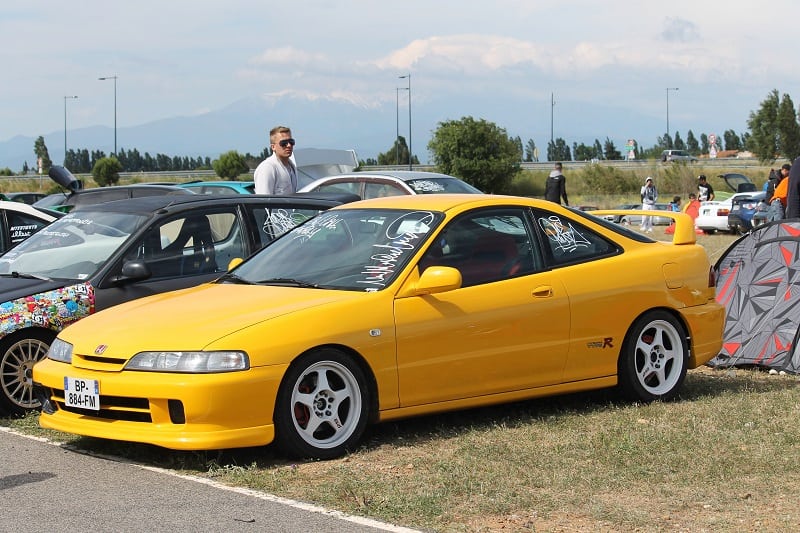 Sold under the Acura brand name in the US in 1997, the Integra Type R is another that changed the game. Honda had seen the appetite for young racers tuning up their Civic’s and thought they’d join the club by revolutionizing their previously tame Integra.

It tried to capitalize on the concept of a hot hatch and did it perfectly. It had a beastly 1.8-liter engine with brilliant front-wheel drive. 195 hp gave the car a level of power that had been so rare in a car of this shape.

Perhaps more important than the specs was the sound. It growled ferociously and it didn’t have the clinical precision of Honda’s of the past. Car manufacturers are still trying to replicate the impact of the Integra Type R. It makes the car an icon and perhaps the most important hot hatch ever. 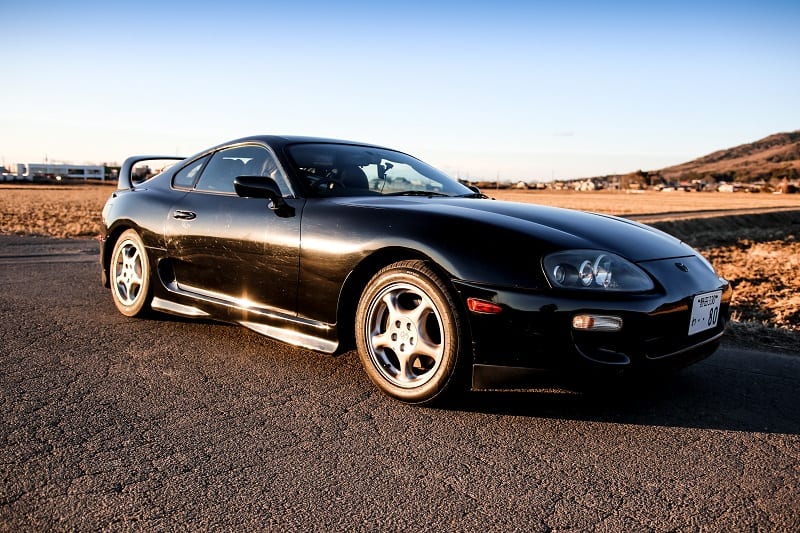 We’ve already seen with the RX-7 and the Integra how you can improve on a classic model and the Supra is no different. The version released in 1993 was the 4th generation of the legendary car.

When it was released, it already had to compete with exceptional models from its Japanese rivals. It was what the Supra had under the hood that set it apart with an incredible twin-turbocharged 3.0-liter engine that delivered 320 hp.

We already mentioned how young petrolheads loved to tune up the Civic but this was another that became a favorite in that regard. It was a rapid car that was able to keep up with much more expensive models. Its suitability for street races helped to give it legendary status. 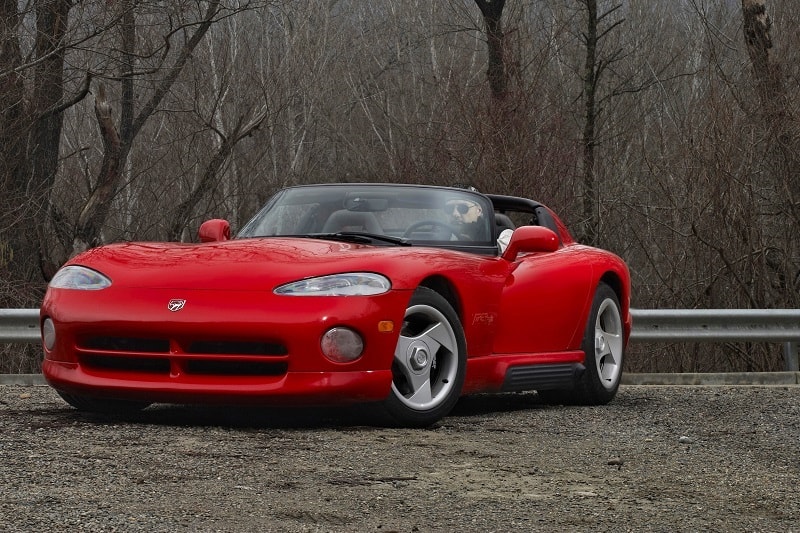 If you wanted a bit of muscle from your 90s sports car then the Dodge Viper was there to come to the rescue. It had a beastly 10 cylinders and a ridiculously powerful 8.0-liter V10 engine, which was able to produce 400 hp.

It wasn’t the easiest car to drive, partly due to it having no traction control or ABS, along with a tendency to oversteer. It was never meant to be a refined car with very little by the way of luxury as it had no air conditioning, for example.

Perhaps the most iconic part of the Dodge Viper was its shape. It looked stunning, it looked fast and it looked like a monster. It was the type of car that you rarely see these days which is why it lives fondly in the world of 90s nostalgia. 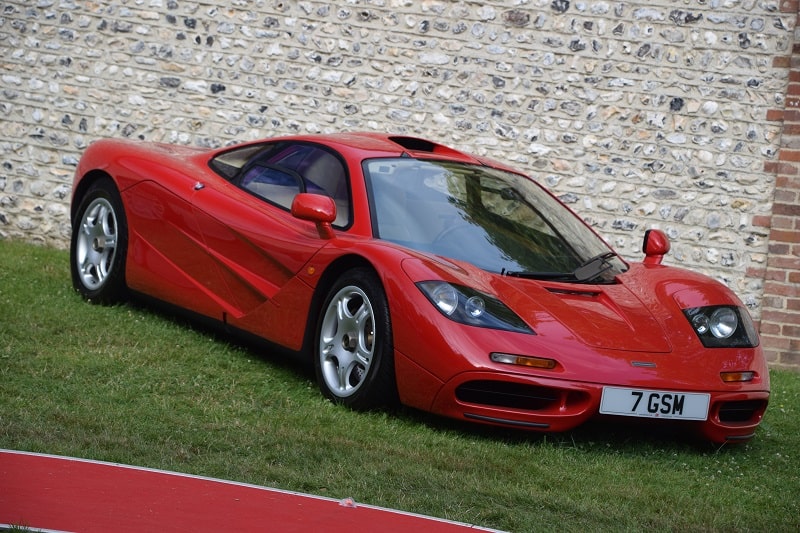 McLaren decided to use the world of F1 technology and put it all into a road car. The result was quite simply one of the best cars ever made. Its most prominent feature was the central steering column which made you feel as though you were in a racecar.

What made it even more fabled was that there were only 106 of them ever produced, which gives them a special rarity. It made a huge impact in the automotive world, not least as it took the crown of the fastest production car of all time.

If this was a list of the greatest cars of all time, it would be a strong contender. It was an engineering masterpiece that helped to break the mold and wasn’t afraid to be bold in its design. The three-seat interior may have been impractical but that’s not something you’ll care about with a car as awesome as this. 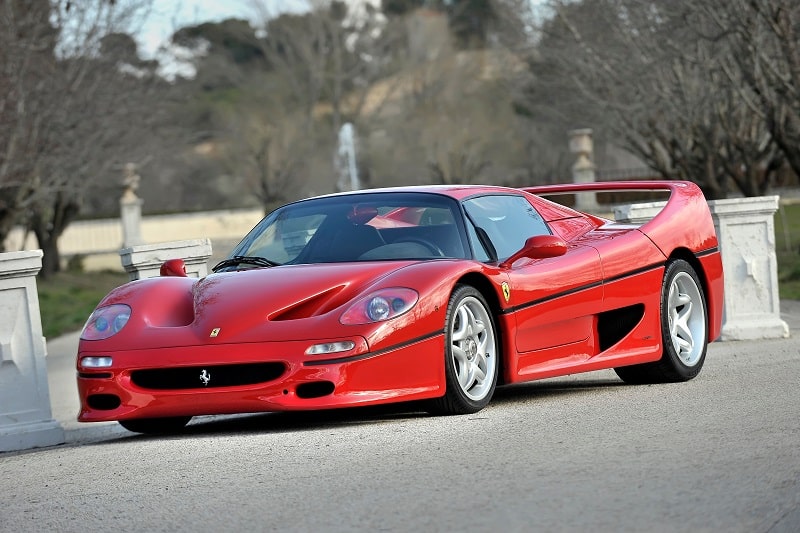 The Ferrari F50 is one of the most underrated cars Ferrari has ever built. As with the McLaren, it’s another car that was heavily influenced by F1. It was a car for purists as it had no power steering, ABS, or power-assisted braking.

What it did have was a design inspired by their 1990 F1 car and had advanced aerodynamics with sophisticated materials. The V12 engine was immense with 520 hp and a top speed in excess of 200 mph.

Unfortunately, it was overshadowed by iconic cars that preceded it such as the 288 GTO and the F40. Looking back now, that’s a great shame. The F50 is a stunningly beautiful car that is one of the marvels of the 90s and a model Ferrari should be very proud of. 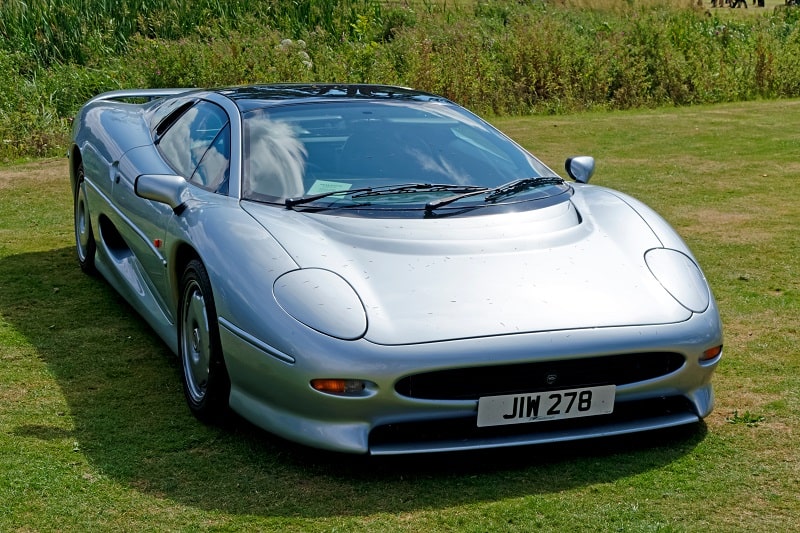 We mentioned how the McLaren F1 took the title of the fastest production car of all time. The car it took that title from was the Jaguar XJ220. This Jaguar has always stood out due to its long profile and sleek design.

The XJ220 was the brainchild of a group of Jaguar engineers who wanted to design a concept car in their spare time. It was shown at the British International Motor Show in 1988 and the positive reaction prompted Jaguar to go ahead and make a road version.

Only 282 were ever produced. The classic 90s design of the car has given it endless popularity which still lasts to this day. Jaguar has always been a cool brand but this is perhaps their coolest ever road vehicle. 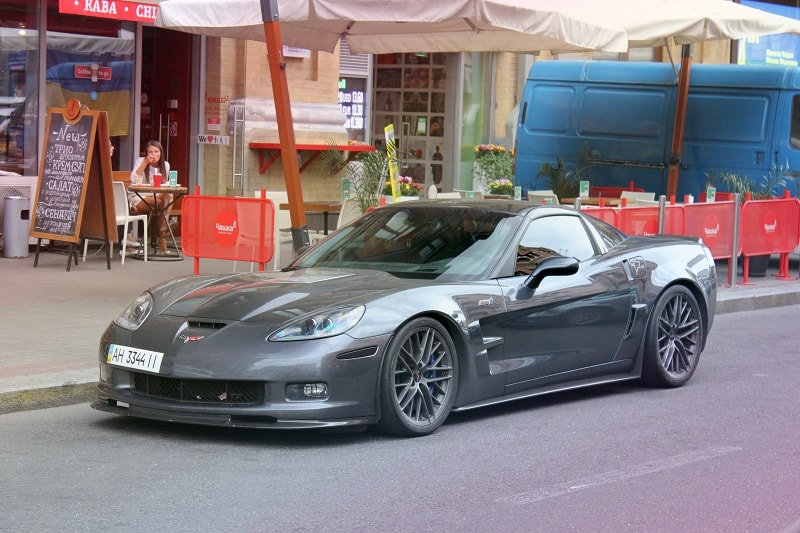 Chevrolet has produced many versions of the Corvette but by far the best was the 1997 version. The 5th generation of the car, known as the C5, saw a more perfected version which also wasn’t as expensive as its previous incarnations.

A big reason why the ZR1 became so popular was the LS small block engine which became a favorite of the aftermarket industry. It’s an engine many love due to its low value, compact size, and excellent performance.

The engine helped to power a car which was beautifully designed. Looking especially radiant in yellow or red, those 90s models are still very popular today. While Chevrolet has produced many Corvette’s, none of them are as iconic as the C5.