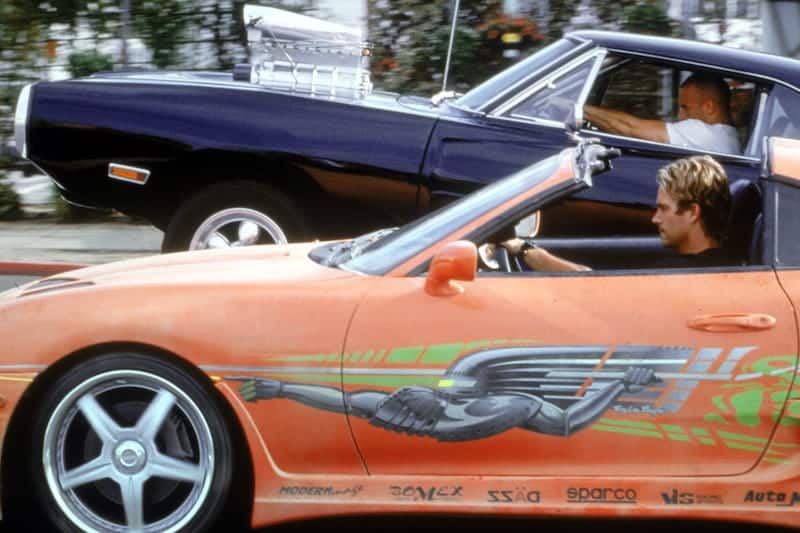 The 10 Best Cars From ‘The Fast and the Furious’ Franchise

These films began as small-scale action thrillers set in a world of rabid street racing and blurred law enforcement lines, but over the years they’ve become so much more. Now The Fast and the Furious films have cemented their iconic status in pop culture. Each film has been uber-successful and has managed to gross large sums at the global box office.

Although every person who is a fan of the films has their particular reasons for why they love them, there is one centralized theme. Arguably the most prominent attraction and drawcard of the franchise isn’t the characters but instead the array of distinguishable, extraordinary cars on offer. With each movie released, there are a host of incredible vehicles from all over the world exhibited.

With the latest installment in the franchise, Fast 9, dropping today, we’re highlighting the 10 best cars from The Fast and the Furious franchise that have brought general audiences and die-hard fans together. 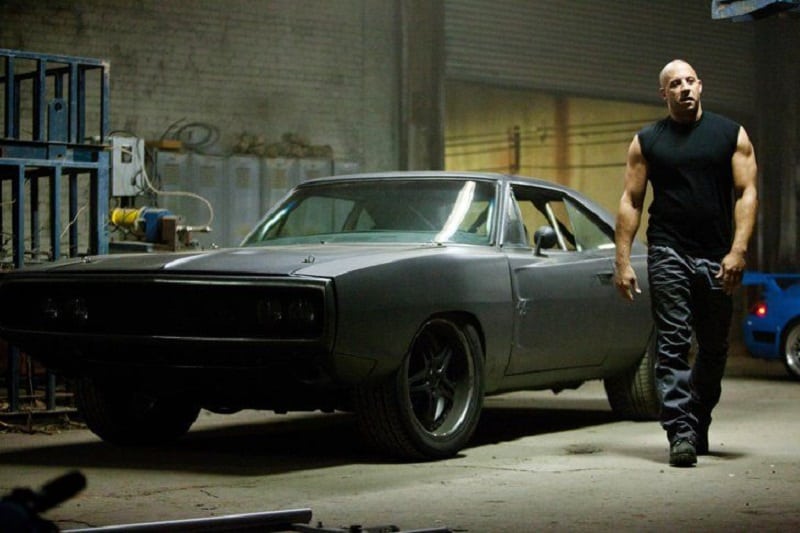 This car is iconic and one of the most influential cars that’s made multiple appearances in subsequent films since its debut in the original movie. Additionally, it’s rumored the vehicle will again make an appearance in the ninth film.

The muscle car in the film features jet black bodywork and a polished supercharged custom-built Chrysler Hemi V8 engine. This engine has aluminum indy competition heads capable of an incredible 900 horsepower. Ironically in the film, Dominic Torreto comments on how scared he is to drive the Charger because of how powerful it is.

Moreover, the Wildwood four-wheel disc brakes ensure the vehicle could be brought to a stop safely. However, perhaps the most impressive achievement of the 1970 Dodge Charger is that it can race the quarter-mile in under nine seconds. 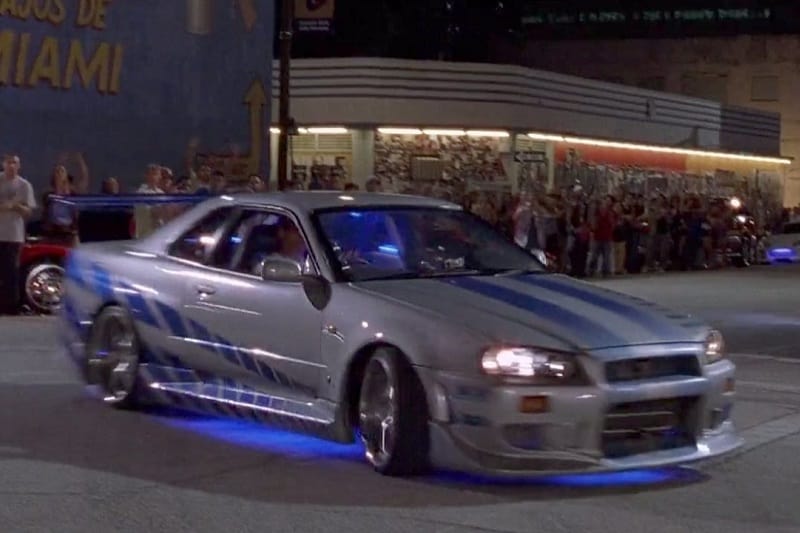 It’s undeniable that Brian O’ Conner’s 1999 Nissan Skyline GT-R R34 from 2 Fast 2 Furious left a lasting impression on the franchise. Not many can forget the famous scene where the Skyline wins a dangerous street race involving the car jumping an opening bridge. The car was so well received that it made multiple appearances in a few other movies in the franchise.

The 1999 Nissan Skyline GT-R R34 is a Japanese grand tourer that has its roots based in the Nissan Skyline range. Additionally, not many people know this car was never manufactured outside of Japan and only 11 of them were legally imported into the United States. This Skyline is also the first-ever GT-R to feature an LCD center console that displays digital information of a car’s engine parameters.

The 1999 Nissan Skyline GT-R R34 that features in 2 Fast 2 Furious has a 50 percent stiffer body structure and is shorter than its predecessor, the R33. Despite the car being advertised as only producing 280 horsepower, it’s actually capable of an output of 320 horsepower. The improvements to the engine’s valve timing, camshafts, and ceramic turbocharger allow it to achieve this feat. 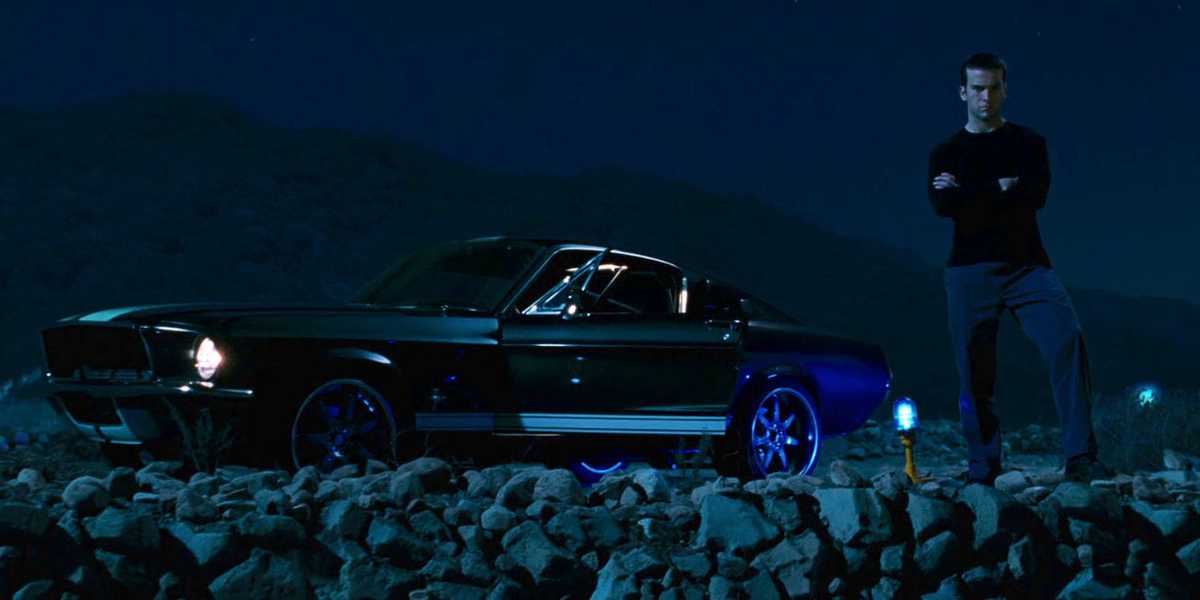 Another interesting tidbit from the movie is that it‘s believed six or seven Fastbacks were used during production. Most of the cars were used for stunts and drifting, and surprisingly they all had V8 engines. In 2019 one of the three Mustang models thought to have survived went up for sale with a fair price tag of $179,900.

Not every great car receives a lot of screen time in The Fast and the Furious, but that doesn’t mean they aren’t memorable. The 1995 Mitsubishi Eclipse is a prime example of this. Although the car is only featured for a short while, with Brian O’ Conner driving it in a few scenes during the fourth film in the franchise, its exotic coloring and suped-up features steal the show.

The 1995 Mitsubishi Eclipse is a customized sports car that Mitsubishi and Diamond Star Motors manufactured. The vehicle is neon green with quirky graphics, over-the-top bodywork, and has underbody lighting in the film. Despite its flashy appearance being somewhat dated years later, it still remains an iconic Fast and the Furious car.

It’s believed the 1995 Mitsubishi Eclipse featured in the film is a GSX model. If that’s the case, it would mean the car is an all-wheel drive with a 2.0-liter inline-four turbocharged engine capable of up to 210 horsepower. 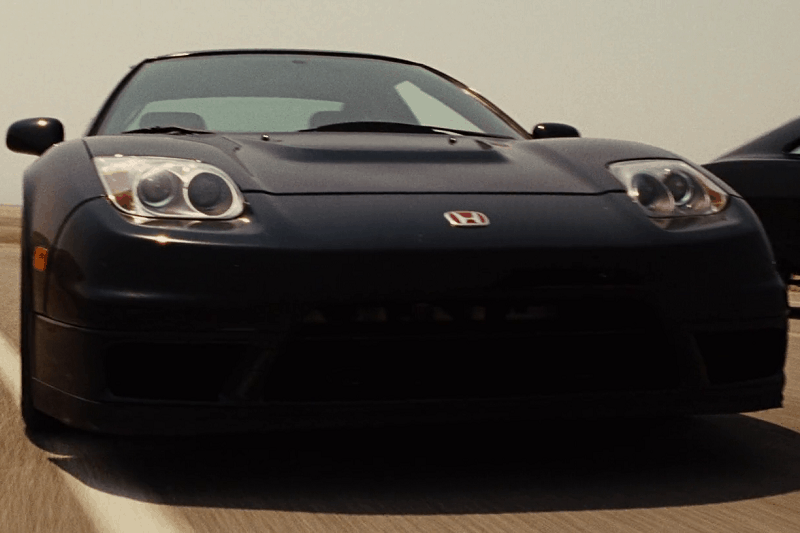 It isn’t only the male characters in the movies that drive the powerful supercharged cars. One of the most iconic and memorable stunt scenes in the fifth movie features Mia Torreto and her 2003 Honda Acura NSX. Interestingly this car is also driven by Mia in the fourth installment of the franchise.

Despite its small size, it’s able to pull off the daring stunts shown in the film because of its capability to produce up to 290 horsepower and its hefty weight rating of 3,152 pounds. Additionally, this car is also able to create a maximum torque of 224 lb-ft.

See more about - The 10 Greatest Movie Cars Of All Time 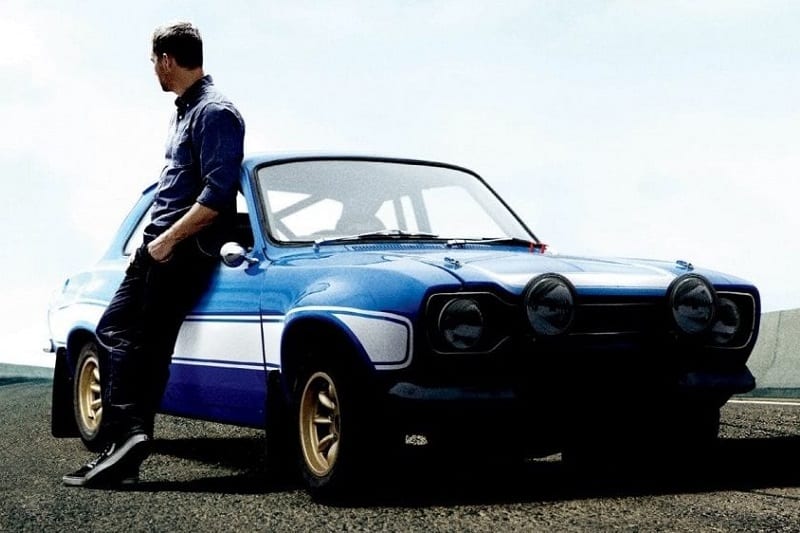 One of the smallest but mightiest cars to feature in Fast & Furious 6 is the 1970 Ford Escort RS1600. This car is driven by Brian O’ Conner, who uses the car to go up against a tank. Yes, a tank! Although this vehicle isn’t a muscle car by any means, it’s still able to achieve one of the most memorable jump scenes in the entire franchise.

It might not seem believable, but all the 1972 Ford Escort RS1600 replicas had to be sourced and built in Britain with only a few surviving film production. Their rarity easily makes them one of the most sought-after vehicles from the franchise. In fact, one of the only surviving models was sold in March of 2020 for a cool $90,000.

The original 1972 Ford Escort RS1600 has a Cosworth 1.6 liter 16-valve BDA four-cylinder engine. Some of the rebuilt models feature the original engine, while others have a 2.0 Vauxhall redtop engine sourced from Opel vehicles. The cars with the original engines can reach 113 horsepower, which might seem dismal today, but this is impressive when you consider the vehicle weighs less than 2,000 pounds. 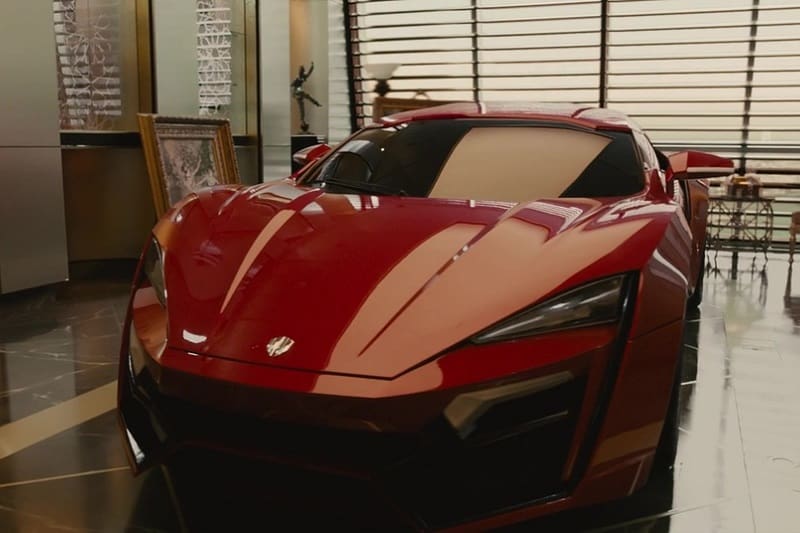 One of the most iconic sports cars driven by Dominic Torreto is the 2014 W Motors Lykan HyperSport. In the exciting seventh installment, Dom jumps this car from one towering skyscraper to the next. The scene both shocked and thrilled viewers as they took in the daring act.

Besides its show-stopping big-screen appearance, the impressive specifications of the Lykan HyperSport had many collectors trying to get their hands on one. Unfortunately for those interested in purchasing one, the 2014 W Motors Lykan HyperSport is an ultra-limited creation.

Only seven of these models were manufactured, with each holding an uber-expensive price tag of a whopping $3.4 million. This astounding price makes this model one of the most expensive supercars ever to be manufactured.

The 2014 Lykan HyperSport is powered by an impressive twin-turbo 3.7 liter flat-six engine that Porsche designed. It can produce 708 lb-ft of torque, 740 horsepower, and a top speed of an incredible 245 mph.

Additionally, this vehicle can achieve a speed of 0 to 60 mph in a shocking 2.8 seconds flat. You might not believe us, but the 2014 Lykan HyperSports features 440 diamonds in the headlights, which likely attributes to its mind-boggling price. 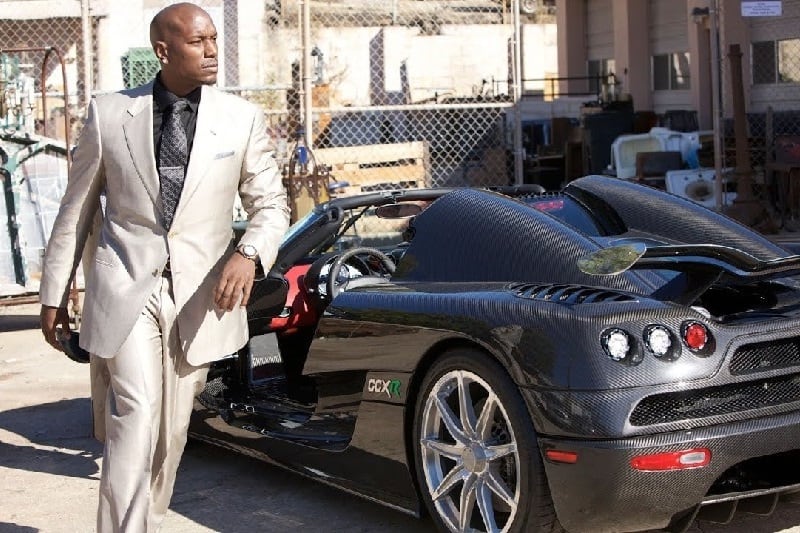 The car titled the world’s first green hypercar appears in the fifth installment of The Fast and the Furious film franchise. The 2010 Koenigsegg makes its grand appearance when Roman Pearce shows it off.

The Koenigsegg CCXR is most definitely a film legend. Swedish car manufacturing company Koenigsegg only made four of these models, making it the rarest car on the planet and the rarest car to appear in The Fast and the Furious movies.

If ever there’s an environmentally friendly supercar, it would be the 2010 Koenigsegg CCXR. This car has a uber-powerful 4.8-liter twin-supercharged V8 engine that’s been modified to run off E85 and E100 ethanol fuel. With that beastly engine, it’s no surprise it can produce an awe-inspiring 1,004 horsepower.

The exterior of the car is unpainted carbon fiber which enhances its sleek look. In 2009 the CCXR was rated one of the 10 most beautifully designed cars in history, and we have to say we believe it can still compete in 2021 for this title. 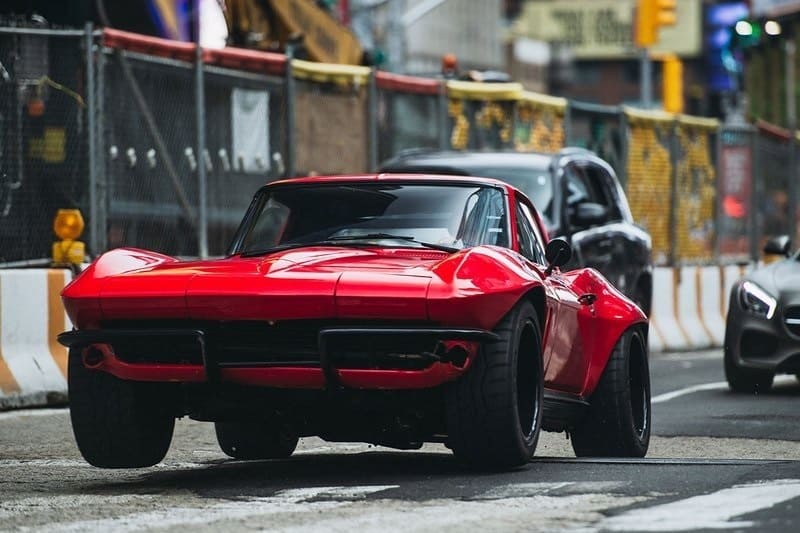 Fresh in the minds of many fans is the 1966 Corvette C2 Stingray that Lettie drives in the eighth movie The Fate of the Furious. This masterpiece of a supercar is an eye-catching red color and has impressive specifications that make it a worthy entrant on our list.

The 1966 Corvette C2 Stingray’s design is inspired by the E-type, a Corvette concept car of the 1950s. Under the watchful eye of motor vehicle design legend Bill Mitchell, the beautiful C2 Stingray was produced.

Unsurprisingly the 1966 Corvette C2 Stingray features some of the best engineering in the supercar world, which is likely why it was ultimately selected to be part of The Fast and the Furious films. During filming, multiple 1966 Corvette C2 Stingrays were used to perform various stunts. Additionally, this car can go from 0 to 60 mph in 5.6 seconds because of its V8 engine. 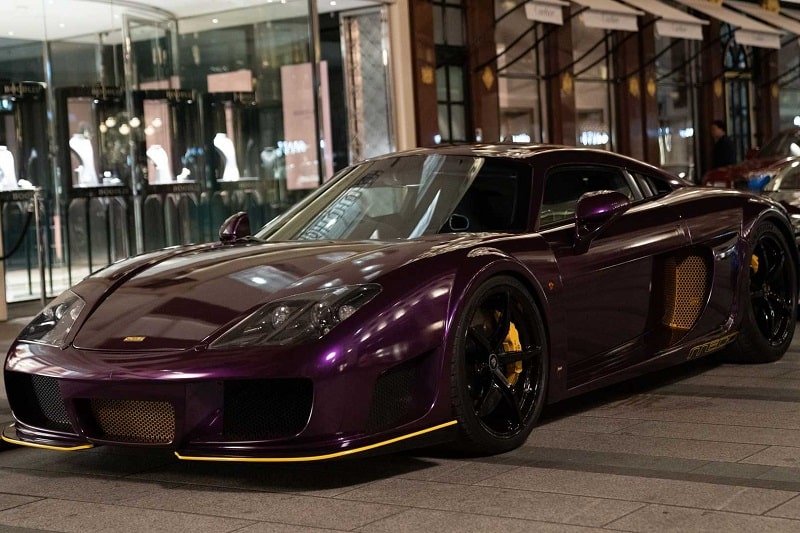 If you haven’t yet seen the 2021 Fast 9 film, you’re in for a treat. The latest installment features a plethora of famous cars worthy of this list which is why it was so challenging to narrow it down. So in our opinion, the 2018 Noble M6 driven by Queenie during a police chase is definitely one of the best Fast and the Furious cars to date.

The 2018 Noble M6 models are all hand-built by a small team of 20 people in Britain. Despite this fact, the Noble M6 is one of the most impressive sports cars with superb handling. Curiously the car can even compete with longstanding brands such as Bugatti, Lamborghini, and Ferrari.

The 2018 Noble M6’s construction is carbon fiber and stainless steel, making it lightweight at only 2,765 pounds. Unlike other notable sports cars, this one has a twin-turbocharged Volvo and Yamaha V8 4.6 liter six-speed combination engine. Imposingly, the vehicle is capable of reaching 0 to 60 mph in three seconds and has a power output of 650 horsepower.