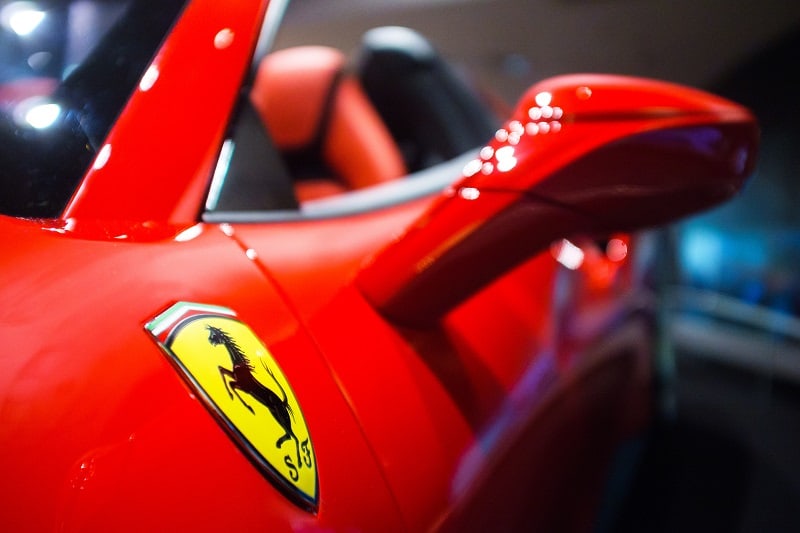 The 10 Best Ferraris of All Time

If you’re thinking about a red car, the Ferrari is probably the first type of vehicle that comes to mind. Ferraris are one of the sexiest cars of all time and they’ve been making vehicles long enough to make them a household name. The brand itself is almost synonymous with the term “race car,” and its vehicles live up to the name and beyond.

The company has been one of the leading vehicle manufacturers for decades. Whether you’re someone getting into the hobby of race cars to a potential browsing customer with a lot of cash, you can’t go wrong with a Ferrari. They’re fast, stylish, and powerful cars.

In this article, we’ll be going over the top 10 best Ferraris of all time. The list below isn’t arranged in any particular order. All these models have something to prove and offer. After all, there’s a reason why they’re the best of the best.

Ferrari has been around for more than 80 years and each generation has been a blast over and over again. We’ll be covering the classics and more modern options, and lest we forget the timeless Ferrari icons from the 1900s. Without further ado, here are the top 10 best Ferraris of all time. 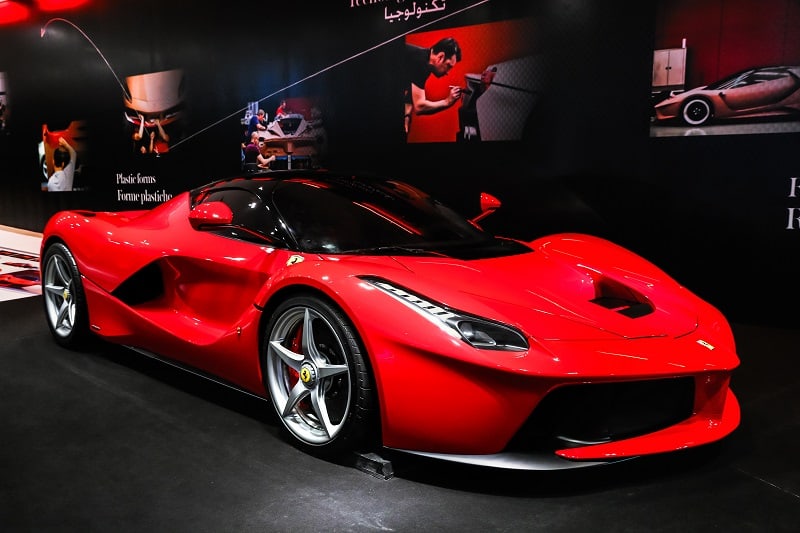 The Ferrari LaFerrari is an iconic design first released in 2013. This vehicle is one of the highest performance cars Ferrari has ever produced for a road car model. The 2016 model offers a 949 horsepower engine with over 663 pound-feet of torque, thanks to its explosive and powerful engine.

Although driving a Ferrari is already an amazing experience, the leather interior of the LaFerrari is like sitting on your couch at home. The performance model offers a 7-speed transmission that takes acceleration to a whole new level. The engine is capable of producing power at any gear.

The LaFerrari is the first hybrid produced by Ferrari, providing the highest power output of all Ferrari’s road cars while decreasing the fuel consumption by 40 percent. The LaFerrari can get up to a top speed of 220mph (350km/h) and accelerates from 0 to 60 mph in under just three seconds. In short, it’s a beast. 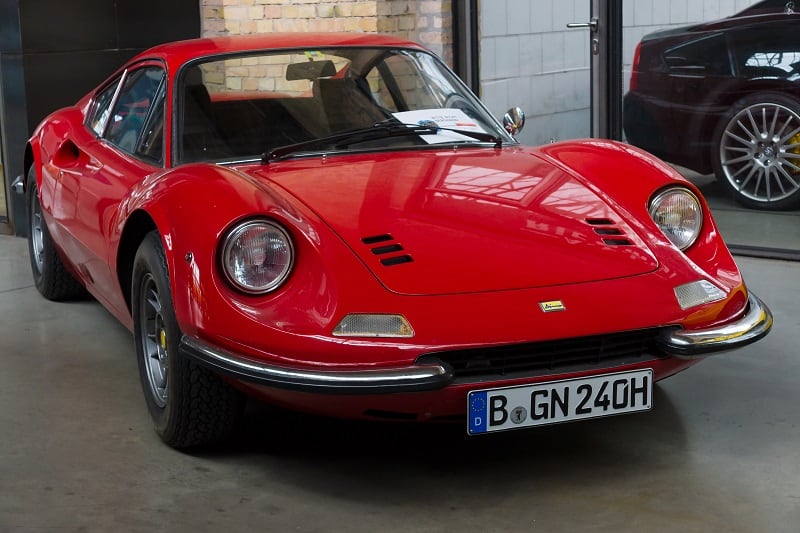 Coming up with a timeless classic, the Ferrari Dino 246 is a 1970s automobile with a vintage design. Although the specs of modern vehicles dwarf the Dino, this was one of the fastest road cars on the market when first released. The Ferrari Dino accelerates from 0 to 60 mph in 7.1 seconds with a top speed of 146 mph.

The classic design has aged well over the years, with the rounded metal body and leather interior key features of this sexy automobile. If we’re talking about horsepower, this vintage pulled 192 hp from a V6 engine, producing up to 226 Nm of torque. The Dino 246 looks gorgeous from all angles, and unlike other older vehicles, has stood the test of time.

It’s a rear-wheel-drive vintage classic and with only about 3,500 models produced, the Ferrari Dino 246 remains one of the more expensive models out there to collect. 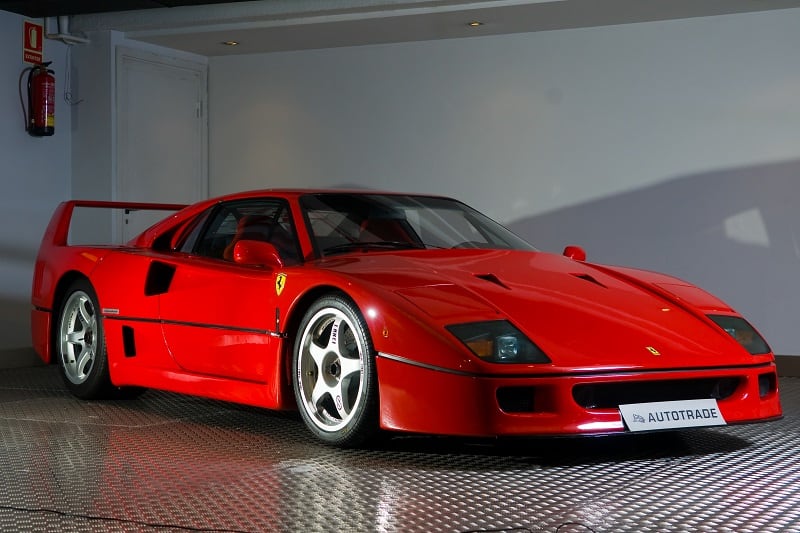 The Ferrari F40 was a car worked on outside of regular office hours. When the car company had faltering sales, an engineer, Nicola Materazzi, proposed Enzo Ferrari an idea to make a super road car to compete with other manufacturing rivals. The decision to get that project approved gave birth to one of Ferrari’s most iconic supercars ever.

The car debuted in 1987 as one of the quickest and biggest Ferrari models at that time. The Ferrari F40 accelerated from 0 to 60 mph in 4.1 seconds, almost breaking the 4-second mark. Arguably one of the most iconic components of this model is the headlights that pop up from the front.

All in all, the F40 was and is one of Ferrari’s greatest creations. 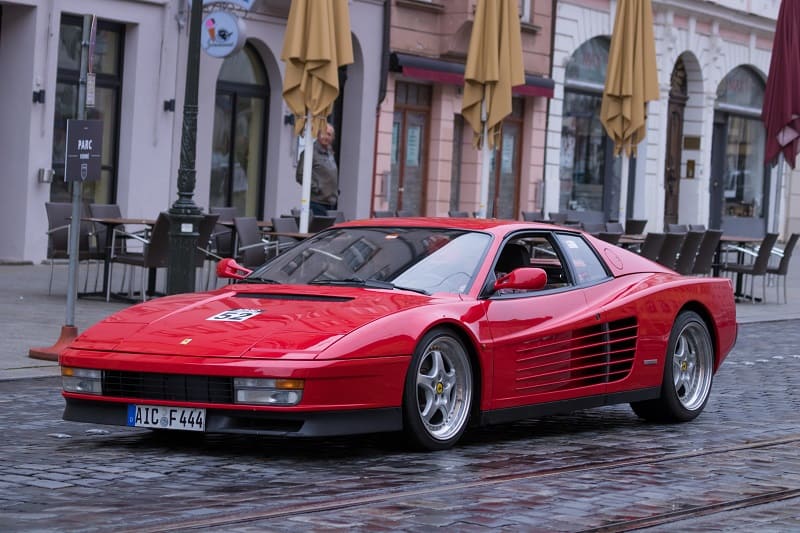 The Ferrari Testarossa was produced between 1984 to 1996 and designed by Leonardo Fioravanti, Ian Camera, and other notable car designers. Approximately 1,000 Testarossas were manufactured, making it a limited edition item. The supercar houses a 12-cylinder engine, which makes it a loud vehicle for its size.

The 0 to 60 mph acceleration takes about 5 seconds and its engine has a power output of 385 hp. Although it isn’t the fastest or strongest Ferrari in production by any means, the design and process behind this vehicle are one for the history books.

The car is a testament to the collaboration of some of the greatest car designers in the industry, with Ferrari at the helm manufacturing it. With a top speed of 180 mph, the Testarossa can easily cruise along the wide and open highways of America. 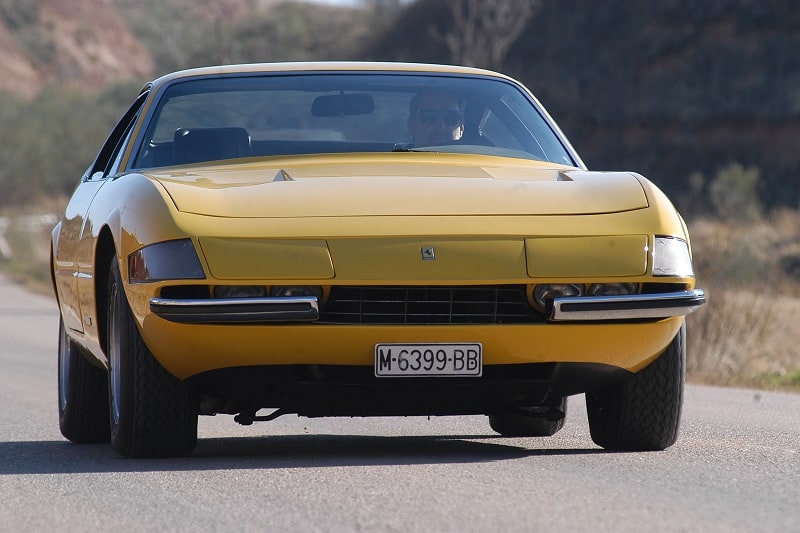 Like some of the other vehicles on this list, the Ferrari Daytona 365 GTB/4 was designed by Pininfarina, one of the world’s most prominent Italian car design companies. Just like the F40, the headlights also pop up in the front when activated.

The design itself feels like a mix of the classic Dino and the more recent and straight shapes from the Ferrari Enzo. The Daytona 365 GTB/4 has a 12-cylinder engine and uses a 5-speed manual transmission, climbing up the 0 to 60 mph acceleration in 5.6 seconds.

With a top speed of 174 mph, the Ferrari Daytona is a fast road car, especially considering its debut happened around the 1970s. 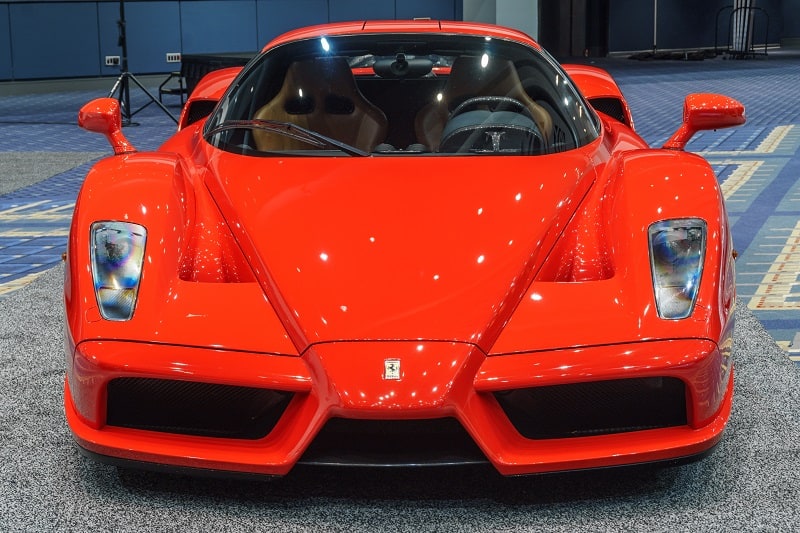 Ferrari Enzo remains to this day one of Ferrari’s most iconic hypercars in its long history of spectacular automobiles. The term “hypercar” is not used lightly in the car industry, but for Ferrari, it’s a common term used when discussing their incredible range of automobiles.

The Ferrari Enzo is one of Ferrari’s most popular cars, preceding the LaFerrari by a few years. Launched in 2002, the Enzo accelerates from 0 to 60 mph in just 3.1 seconds, a stunning achievement for its time. Furthermore, with a top speed of 217 mph, the hypercar had figures that blew enthusiasts away.

Limited to just 400 units, the Ferrari Enzo is the last naturally aspirated hypercar from Ferrari.

Fun fact, the final build model was given to none other than Pope John Paul the II himself! 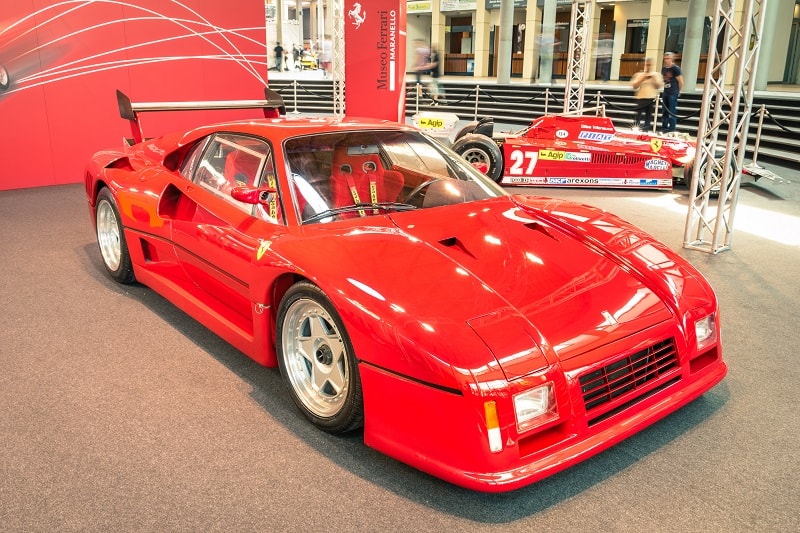 Released in 1982, the Ferrari 288 GTO is a timeless vintage vehicle that’s climbed its way to the top of the mountain when it comes to the best supercars of all time. With a price valuation of $3 million, it’s also on the expensive side.

The 288 GTO cranks out almost 300 hp with its V12 unit engine, easily placing itself as one of the fastest road cars at the time. Although the vehicle itself was performance-focused, the interior is nothing short of premium. The carbon fiber and Kevlar roof give the space a more pristine ambiance, while the suede-wrapped dashboard, carpeted floors, and leather seats remain part of Ferrari’s interior standard package.

All in all, Ferrari only produced less than 300 units of the Ferrari 288 GTO, with one being painted yellow as a prototype of Pininfarina. 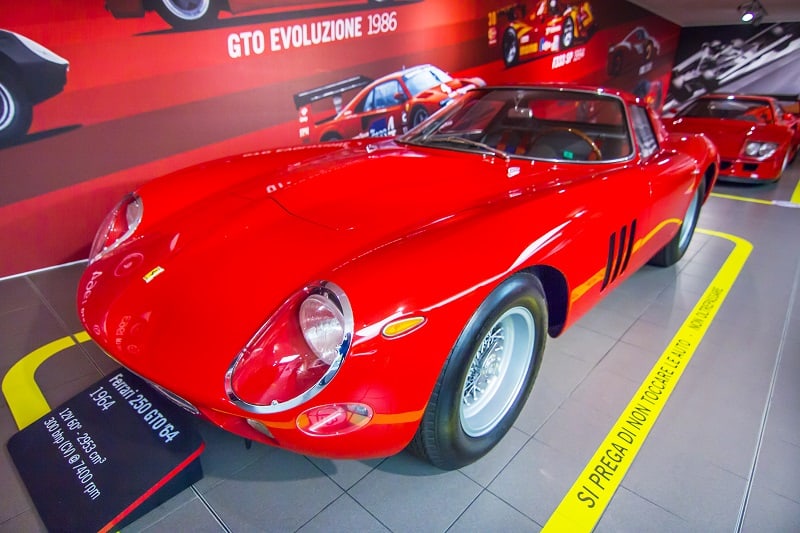 If you thought the prices couldn’t get any higher, the Ferrari 250 GTO was sold at almost $50 million at a 2018 auction. It has since been the most expensive car ever sold at auction, and with only 36 of these units manufactured between 1962 and 1964, it’s no wonder why it’s priced where it is today.

The 2-seater sports car is the “Hottest Car of All Time” according to Popular Mechanics and is one of Ferrari’s greatest vehicles. The car has a power output of almost 300 hp, which is incredibly high for the time it was made. The V12 engine produces a maximum speed of 173 mph with an acceleration of 0 to 60 mph in an incredible 2.9 seconds.

This is one of those cars you can’t help but be in awe of. Truly an engineering and manufacturing marvel from none other than Ferrari. 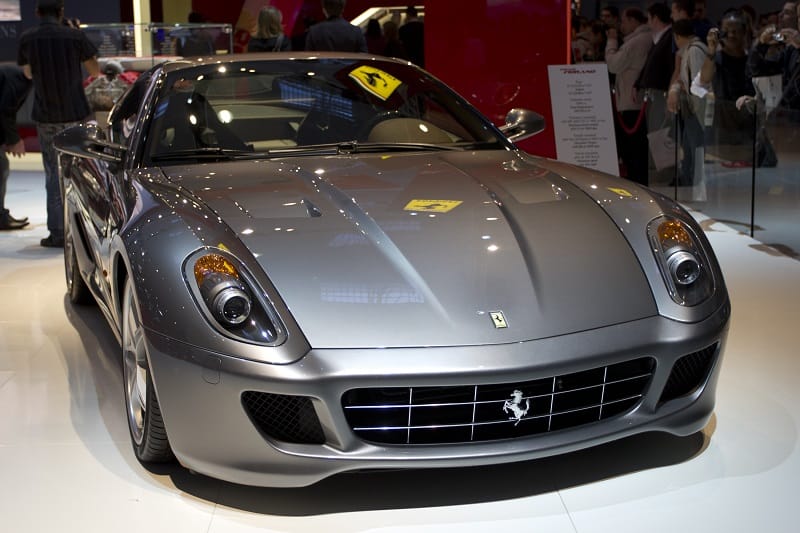 The Italian manufacturer’s last V12-powered Ferrari, the Ferrari 599 Manual is the last of its kind. The car has a manual transmission, which has since been discontinued by Ferrari since its release in 2008.

With a 611-horsepower V12 engine mounted in front of the car, the vehicle accelerates from 0 to 60 mph in 3.2 seconds. If that wasn’t fast enough, the vehicle can reach a top speed of 206 mph.

The Ferrari 599 does not come with a manual stick by default, but the Italian manufacturer built 30 units with 6-speed manual transmissions. These 30 units are since coveted by enthusiasts and car collectors due to its rarity and value, being the last of its kind.

Ferrari kept the classic icon of a manual transmission car alive for just one more model with the 599 manuals. 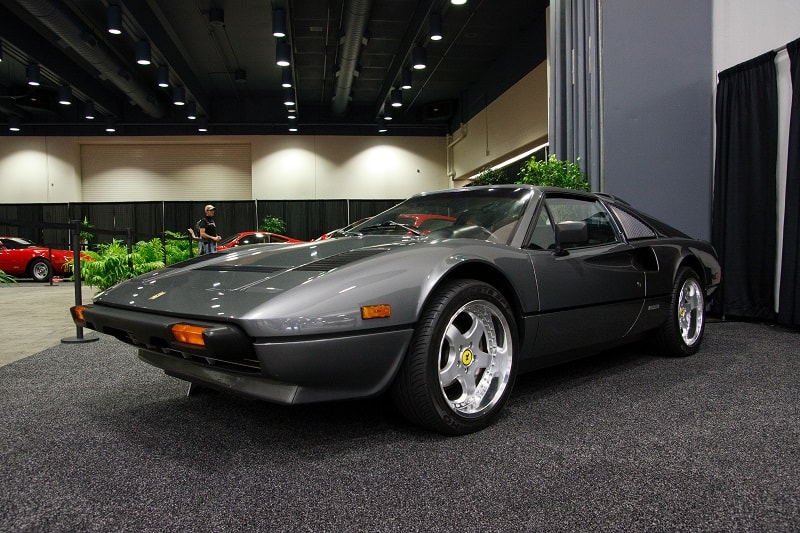 Last but certainly not the least, the Ferrari 308 GTS. The 308 is a futuristic yet vintage car that has captured the heart of car enthusiasts time and again. Now, almost 40 years since it was produced, the 308 stands the test of time as one of Ferrari’s iconic vehicles.

The Ferrari 308 accelerates from 0 to 60 mph in 6.6 seconds, which for a car that came out in 1982, still puts it up there. Just like some of the previous cars on this list, the 308 was designed by Pininfarina, specifically Leonardo Fioravanti, who also designed the Dino and the Daytona.

If you’re a classic man, the 308’s manual dogleg transmission is bound to catch your attention.

RELATED: Rare collection of Group B rally cars up for auction