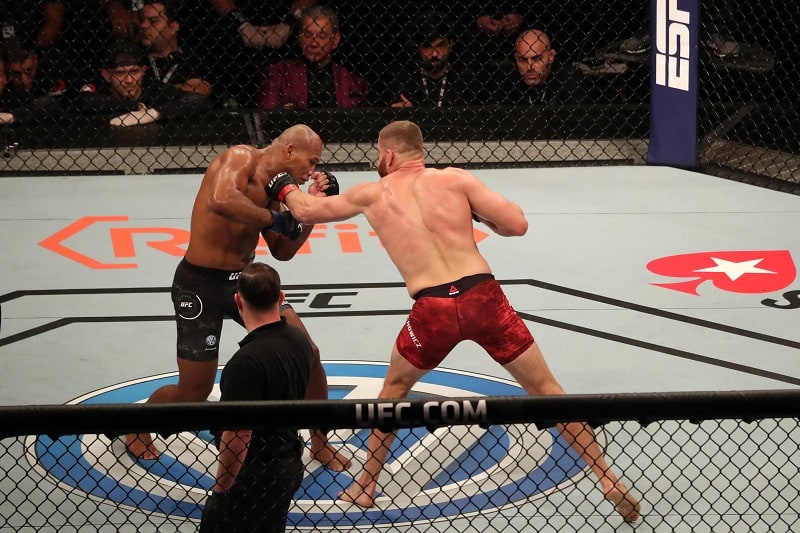 The 10 Greatest UFC Fighters of All Time

If you love raw, aggressive but extremely technical hand-to-hand combat, then the Ultimate Fighting Championship (UFC) may well be your cup of tea. It all started on November 12, 1993, and there have been countless memorable nights since. The UFC helped to take the sport of mixed martial arts (MMA) to the next level and along the way, has made numerous star names.

Here we take a look at some of the best fighters who have ever graced the sport. Those who have helped to make the UFC what it is today. Some make this list as they were technically incredible, others have made it because they helped to change the game,

I’m sure you’ll agree with some selections and disagree with others but here is our list of the 10 greatest UFC fighters of all time.

For many, “Rush” is the greatest to have ever done it and we can’t disagree. You only have to look at his record to see the names he’s beat such as Matt Hughes, BJ Penn, Michael Bisping, Matt Serra, and more.

He isn’t the most electrifying fighter on this list but for the purists, he is a master of his craft. There is no one he faced who he didn’t beat. That in the world of UFC is an unbelievable achievement.

He lost twice with the first being to Matt Hughes, who he went on to beat twice, and Matt Serra, which is a loss he quickly avenged. He finished with a record of 26-2 and won two different belts at welterweight (which he defended nine times) and middleweight.

St. Pierre left the sport in 2013 but came back in 2017 to face Bisping. He won by technical submission and it helped to cement his reputation as an all-time great. Not many fighters get to go out on top. He did and in spectacular fashion.

Jon Jones, nicknamed “Bones,” was born in 1987 in Rochester, New York to a father who was a pastor and a mother who was a nurse. He is the youngest person to have ever won a championship by winning the UFC Light Heavyweight Championship in 2011 and then doing it again in 2018. He’s arguably the best pound-for-pound fighter but has had some spats with the UFC in recent times due to money.

Initially working as a bouncer, the circumstances and responsibilities of raising a young family of his own forced Jones to become a professional MMA fighter. Two weeks into his first MMA training, Jones won his first-ever fight and quickly made his UFC debut in 2008.

His wrestling is key in his MMA fights as he is prone to executing takedowns and has a fantastic defense that can withstand most grappling attacks. Jones has some of the most theatrical and brutal takedowns in UFC history.

As brutal as he is in the ring, Jones also has a lot of issues on the sidelines such as hit and run charges in 2015 and doping suspensions that have been a hindrance to his fighting career. There is no doubting his talent though. He’s one of the best to ever do it, some would say the best ever.

Khabib Nurmagomedov is an incredible fighter who originates from the Republic of Dagestan in Russia. He is nicknamed “The Eagle” and was born in 1988. He was the undisputed champion of UFC and MMA fighting where he competed in the lightweight division. Nurmagomedov has won and held the title of UFC Lightweight Champion from April 2018 to March 2021.

How impressive is he? Well, throughout his MMA career in UFC, he won 29 times and never lost, making him the undisputed and undefeated champion. Nurmagomedov’s fighting style is generally a mix of sambo, judo, and wrestling and is widely regarded as the greatest MMA athlete of modern times. His professional MMA debut was in September 2008 where he racked up four wins in a month and from then onwards his feats in the UFC became legendary.

One of the highlights was his fight against Conor McGregor that was the MMA match with the biggest audience in its history. The UFC president, Dana White tried his best to persuade Nurmagomedov to take on one more fight before retiring in March 2021, but in the end, he accepted his decision.

You might think that Silva should be regarded as the best UFC fighter of all time, and well, we wouldn’t argue. He is an unbelievably good fighter but the battle for the UFC goat is a very close one.

The most impressive aspect of Silva’s career was that title reign. No one could touch him for an unbelievable 2,457 days. That covered 10 titles defenses, which is incredibly impressive in such a tough sport.

All UFC fighters are tough but Silva took it to another level. In his 17-fight winning streak, the fights only ever went to points on two occasions. If you stepped into an octagon with him, you were more than likely getting knocked out.

The end of his career undoubtedly affects his legacy. He was 38 when he fought Chris Weldman and probably should have called it a day. Instead, he let his record slip from 33-4 to 34-11. There is also the black cloud of his no-contest vs. Nick Diaz for taking anabolic steroids. While the ending wasn’t great, we’ll never forget that run from 2006 to 2012 where no one could come close to beating him.

If you were to ask someone to name some great women UFC fighters they’d probably come up with the likes of Holly Holm, Cris Cyborg, Ronda Rousey, and Miesha Tate. Well, Nunes beat them all. The UFC didn’t bring women into the sport until 2013 but when they did, the likes of Nunes showed that they more than deserved the billing.

She’s an absolute force of nature and dominates any opponent that is put in front of her. By the time she’s done, Nunes could well move to the top spot when it comes to the best UFC fighter of all time.

She’s beaten all there is to beat and has done it over two divisions. The problem she faces now is trying to find opponents who are close to her level.

See more about - The 10 Best UFC Fights Of All Time

Stipe Miocic is the best heavyweight UFC fighter of all time. While not quite the glamour division it is in boxing, there is something epic about huge men going into the octagon and trying to destroy each other.

In the heavyweight division, there is no margin for error when they punch this hard. It means that records in the highest weight class often don’t look quite as good as they do in the divisions below. That being said, Miocic still has a great record of 14-4 in the UFC with wins over the likes of Daniel Cormier (twice) Junior dos Santos, Alistair Overeem, and Fabricio Werdum.

Two of his losses have been avenged against dos Santos and Cormier and he has a great highlight reel of incredible knockouts. He may not be the most talented fighter on this list but you have to respect the best fighter in the most violent division.

He’s Irish, he’s electric to watch, and this year, Forbes crowned Conor McGregor as the highest-paid athlete in the world. Nicknamed “Notorious,” McGregor is the embodiment of a loose cannon and that is said with the utmost respect to how he has built his brand as an MMA fighter and UFC royalty. Even people who don’t follow UFC would have heard of his name, and he’s helped to give the UFC an incredible amount of exposure.

He fights to entertain and has always been the greatest showman in the sport. He has won titles in two divisions before but if we were to ask the question; is he the best MMA fighter ever? The truth is, he’s not.

In the case of Conor McGregor, persona trumps title any day and if another question were to be asked of who is the most well-known MMA fighter ever? Then there is no other answer than Conor McGregor. He may not be the greatest talent that has ever fought in an octagon but there is no doubting his legacy in the sport.

No one really dominated a division quite like Demetrious Johnson. He owned the flyweight division with an incredible 11 defenses. From 2012 to 2017, no one could beat him.

If this was a list of the most exciting UFC fighters then he wouldn’t make the list. He was a fighter for the purists, methodically working out his opponents and not giving them a chance of victory.

He wasn’t a marketer’s dream but he didn’t care about that, all the “Mighty Mouse” cared about was putting wins next to his name and he did that plenty of times. A few fighters on this list have reached greatness by winning two belts, something he never tried to do. He’s seemingly past his prime now so we’ll probably never know whether or not he could have done it.

MMA fighters and those who are in the UFC have seen their fair share of wacky characters and some of them have already been mentioned in this list. However, none could be more astoundingly unique as Israel Adesanya, also known as “The Last Stylebender” due to his prominent references to Japanese anime such as Naruto and Death Note in press conferences and interviews.

Born in 1989 in Lagos, Nigeria, Adesanya grew up in Auckland, New Zealand, which he calls home. Adesanya’s fighting style is basically boxing and kickboxing and he is highly regarded as one of the best strikers in MMA.

His influence in taking up kickboxing was since he was inspired by the Thai kickboxing movie called Ong-Bak. He is ranked third in the current UFC pound-for-pound ranking and is currently the UFC Middleweight Champion after making his UFC debut in February 2018.

Ronda Rousey makes this list for a similar reason to McGregor – it wasn’t just about the fighting. The UFC needs people to ignite the public interest and get people talking, for women’s MMA, there was no one better than Rousey.

The retired American MMA fighter is the first female Hall of Famer for the UFC and her nickname. “Rowdy,” was well deserved. She competed in the featherweight and bantamweight divisions with a fighting style that was heavily influenced by judo. Rousey had previously represented the United States in judo and won a bronze medal in the 2008 Summer Olympics, making her the first American to achieve the feat in the sport.

She became an amateur MMA fighter in 2010 and turned professional in 2011. In 2012, she became the first woman to sign with UFC where she became the UFC Women’s Bantamweight Champion and then defended her title in 2012. Rousey branched out to professional wrestling and acting after retiring from MMA. She helped bring attention to women’s UFC and helped to make it the force it is today.

See more about - The 10 Fastest Knockouts In UFC History