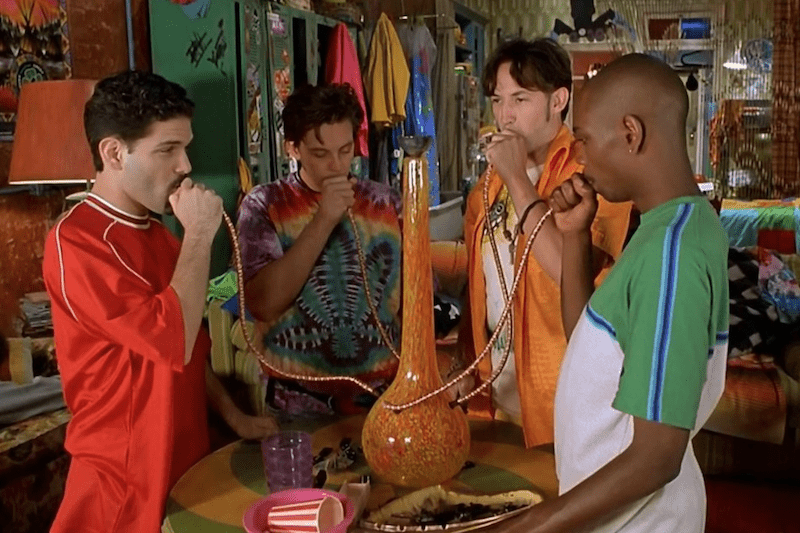 Getting high and watching movies is a favorite pastime for any stoner. Lighting up a big blunt and settling in with a classic flick is a great way to spend an evening (or day if you have more time on your hands). But if you are going to do this the best type of movie to watch is a comedy. Everything is funnier when you are wasted, so watching a comedy will have you rolling around on the floor unable to control your laughter. So what are the best funny movies to high?

Surprisingly, there are more choices than you might think. Films about stoners and weed culture will always provide laughs. But there are also lots of other comedies that flirt with other genres that also do the job. To help you with your choice, we have selected a fantastic bunch of movies. From Cheech & Chong to the Scary Movie franchise, these are the best flicks when it comes to funny movies to watch high.

Before he broke out with Chappelle’s Show, Dave Chappelle starred in this hilarious 90s stoner comedy. When one of his weed-smoking mates gets put in prison for killing a police horse, Chappelle and two of his closest start selling weed to raise the $1 million bail. Their weed business is such a success that they run afoul of local drug dealer Samson Simpson (an always reliable Clarence Williams III).

Half Baked is chock full of weed jokes (Chappelle’s girlfriend’s name is Mary Jane) and provides plenty of laughs throughout its 82 minute running time. This film is endlessly quotable and has some great cameos, including Snoop Dogg as a scavenger smoker, Willie Nelson talking about the cost of condoms, Stephen Baldwin as a MacGyver smoker, and the late, great Bob Saget as a cocaine addict, who has one of the lines of the movie.

Stoner comedy doesn’t get any better than Cheech & Chong. For over 50 years the duo of Cheech Marin and Tommy Chong have entertained audiences with their stoner schtick. They’ve released countless comedy albums, toured the globe with their stand-up shows, and starred in several feature films. The best of these is their first foray into movies, Cheech & Chong: Up in Smoke.

In this comedy movie, the two potheads unknowingly smuggle a van made of marijuana into Mexico while being chased by the inept  Sgt. Stedenko (Stacey Keach). While not much was expected from this flick, Up in Smoke ended up making over $100 million worldwide and thrust Cheech & Chong into the mainstream. It’s also really great to watch when high.

The comedy writing team of Seth Rogen and Evan Goldberg (with some help from Judd Apatow) delivers an action-comedy anyone can enjoy, high or not. Directed by David Gordon Green (Halloween, Haloween Kills), Pineapple Express is about a couple of stoner losers who witness a murder by corrupt cops and are forced on the run.

This movie has plenty of laughs that match the all-star cast that includes Rogen, Danny McBride, James Franco, Gary Cole, Amber Heard, Rosie Perez, and Craig Robinson. The film also has a top-notch soundtrack with songs from Huey Lewis and the News, Cypress Hill, Spiritualized, and Peter Tosh.

A sequel was rumored to be happening but got canned over budget disagreements. Despite this, Pineapple Express stands alone as a fantastic and funny movie.

Here is another classic weed flick that developed a cult following after its release in 2004. Harold Lee (John Cho) and Kumar Patel (Kal Penn) embark on an adventure to the fast-food chain Whitecastle after getting high. What follows is a madcap series of events that sees the two best friends attacked by a raccoon, propositioned by a man named Freakshow, ride an escaped cheetah, and have a run-in with police after Kumar accidentally punches a cop. Neil Patrick Harris also stars as himself, high on ecstasy.

A lot happens in Harold & Kumar Go To Whitecastle as the two’s quest for a delish burger is constantly interrupted. Although the film spawned two sequels (neither are very good), you can’t go past the original when it comes to a modern stoner comedy.

At the time of its release, Ice Cube was one of the biggest rappers in the world. After finding success with the NWA, he had been a solo artist at the top of his game for six years. During that time Cube started to build a solid filmography but was sick of movies about African Americans portraying the gangster lifestyle. Teaming with DJ Pooh, the two came up with the script for Friday.

Fired from his job and with no prospects, Cube’s Craig Jones decides to spend his Friday hanging out on the porch with his drug-selling best friend Smokey (Chris Rock). When Smokey’s boss demands they pay the $200 Smokey owes him before 10:00 pm that night, the two must do all they can to get the money while encountering a cast of colorful characters.

Friday turned Cube and Rock into credible actors and established F. Gary Grey (directing his first film) as one to watch in the future. A cult smash, there have been two sequels and an animated series, although none stack up to the original.

There are five films in the Scary Movie franchise, and while they are all worth a watch (despite getting progressively worse), you can’t beat the original. Written by the Wayans brothers, Scary Movie is a parody of teen slasher films in the wake of Scream. It borrows from a whole raft of horror films (Halloween, The Blair Witch Project, The Shining, and more) and follows a plot similar to Scream, with a masked killer terrorizing a local town.

It features an eclectic cast of up and comers (Anna Faris, Regina Hall, and, Lochlyn Munro), wall-to-wall jokes, and the presence of the Wayans brothers (Marlon, Shawn, and Keenan Ivory) in supporting roles.

Method Man and Redman starring in a film is a sure sign that weed will be involved. In this absurd film, the two rappers play students (despite boh being almost 30) who smoke the ashes of their dead friend. His ghost then appears and helps them pass their entrance exams to Harvard where they get into all sorts of trouble.

The plot of How High is doesn’t really matter. It’s a vehicle for Meth and Red to follow their acting dreams while smoking a shit ton of weed. While there are plenty of laughs, it really helps to be stoned when watching this one. Trust us.

Of all the Monty Python films, it is hard to go past the comedy troupe’s hilarious take on the Arthurian legend. Written and performed by Graham Chapman (Arthur, King of the Britons), John Cleese (Sir Lancelot the Brave), Terry Gilliam (Patsy, Arthur’s Servant), Eric Idle (Sir Robin the Not-Quite-So-Brave-as-Sir-Lancelot), and Terry Jones (Sir Bedevere the Wise), the film is a side-splitting comedy regarded as one of the greatest British films of all time.

Unlike their first movie, And Now for Something Completely Different, a compilation of sketches, Monty Python and the Holy Grail is an actual movie with a beginning, middle, and end. All five of the comedians are at the top of their game, with the song and dance numbers some of the group’s best. The gags are non-stop and the cameos are all fantastic.

The punchlines don’t stop in this 80s classic from the trio of David and Jerry Zucker and Jim Abrahams. Airplane! is a direct parody of the 1957 Paramount film Zero Hour! along with other disaster films. Long before Scary Movie made light of the horror genre, Airplane! gave movie fans a taste of satire with this insanely funny feature.

The jokes come thick and fast and don’t let up, with many of the best one-liners in film history found in this raucous comedy. The cast is also stellar, with the likes of Robert Hays, Julie Hagerty, Leslie Nielsen, Robert Stack, Lloyd Bridges, and Kareem Abdul-Jabbar all doing great work. Airplane! was not only a commercial success ($171 million worldwide) but influenced a heap of directors and films, with Peter Farrelly referencing the film as the reason he got into the movie business.

Watch this movie high and you just might swear off drugs altogether. Fear and Loathing in Las Vegas is an adaptation of the novel by Hunter S. Thompson that stars Johnny Depp and Benicio del Toro. The movie follows the two on their drug-fuelled adventures in Las Vegas and features lots of zany visuals and off-the-wall acting from the two leads. The cast also includes a host of fantastic actors in supporting roles, such as Tobey Mcguire, Gary Busey, Christina Ricci, Cameron Diaz, and Harry Dean Stanton.

Directed by Monty Python alumni Terry Gilliam, it’s no wonder this film is a bit kooky. There is a lot going on and while the script is a bit all over the shop, there is enough to keep you entertained. Although a commercial bomb, the film has become a cult classic and is a great flick to watch while roasting a spliff.

Stoner comedy doesn’t get much stupider than this laugh-a-thon from Daniel Leiner, the man also responsible for Harold & Kumar Go to White Castle. Ashton Kutcher and Seann William Scott, arguably at their prime, star as two dim-witted stoners who forget where they have parked their car after a big night. As they try and retrace their steps and find their missing car, the duo runs into a variety of strange characters, including a transgender stripper, a cannabis-loving dog, aliens, cultists, and a Chinese tailor.

Dude, Where’s My Car? is stupid fun that’s even better when you’ve had a couple of tokes. The soundtrack is also top-notch and includes a stack of big tunes from that time period.

Coming from Adam Sandler’s Happy Madisons Productions, you know what you are going to get with Grandma’s Boy. An adolescent comedy crammed with toilet humor and sex jokes. And while this may be the case with Grandma’s Boy, it’s also one of the better non-Sandler starring films from his production company.

In this one Allen Covert (Sammy from The Wedding Singer) is a 35-year-old video game developer who is forced to move in with his Grandma and her two friends. There’s a subplot about Covert creating his own game and a love story with Linda Cardellini, but it’s the interplay between Covert and his nerdy mates played by Jonah Hill and Kelvin Yu that get the best laughs.

This is another one of those early 00 movies with one hell of a soundtrack, with Bloc Party, The Futureheads, Aphex Twin, and Spin Doctors all featuring.

When it comes to stoner movies, Dazed and Confused is right up there. Director Richard Linklater gathers together a cast of up and comers (Ben Affleck, Milla Jovovich, Cole Hauser, Parker Posey, Adam Goldberg, Renee Zellweger, and more) for this coming of age drama. It follows a group of friends on the last day of school in 1976 and the experiences of both freshmen and seniors. There’s lots of drug-taking, involving dialogue, and the odd spurt of violence.

This is another one of those films that bombed at the box office but found a cult following on VHS. It is also notable for Matthew McConaughey’s big break, with the Texan playing the sleazy David Wooderson, a grown man in his 20s with a penchant for high school girls. “Alright, alright, alright…”

You don’t need to be wasted to find this Will Ferrell hit funny, but it certainly adds an extra element of enjoyment. Anchorman: The Legend of Ron Burgundy comes from the mind of Ferrell (who stars) and Adam McKay (who directs) and is a hilarious comedy about the titular Ron Burgundy (Ferrell).

This is a hilarious film that turned Ferrell into a bonafide star and spawned the 2013 sequel Anchorman 2: The Legend Continues.