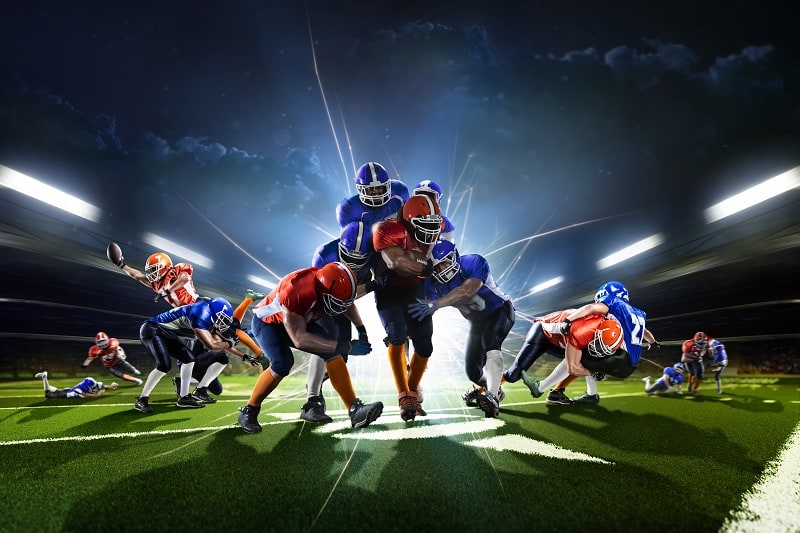 The Highest (And Lowest) Scoring NFL Games of All Time

Since the NFL’s birth in 1920, the game has seen every extreme. Factors such as matchups and weather have produced games memorable for frequent trips to the endzone and struggles to get anything going on offense.

This list contains the league’s highest- and lowest-scoring games, along with interesting tidbits about each.

A midseason tilt in 2015 saw Drew Brees and Eli Manning slinging the ball around to opposing offenses. The pair combined for 91 passes and 13 touchdown strikes.

New York fell early but rallied to 21 fourth-quarter points to tie the game at 49 with 31 seconds left. Brees got the home team into field goal position and Kai Forbath nailed a 50-yard attempt with no time remaining to give the Saints the win.

The Houston and Oakland offenses came screaming out of the gates in this one, with a 35-35 tied score at halftime.

The game-winning field goal in this one was a 39-yard attempt off the boot of Mike Mercer of the Raiders. The standout player of the contest was Oakland receiver Art Powell, who caught 10 passes for 247 yards and four touchdowns.

Two of the NFL’s best teams squared up for this barn-burner in Los Angeles, with Patrick Mahomes and Jared Goff leading opposing offenses. Both threw for more than 400 yards, but it was Goff and the Rams coming out on top.

Goff didn’t throw an interception and spread the ball around for 31 completions. Los Angeles was helped with three interceptions on the defensive end.

In a battle of a too much orange on the field, Cincinnati outscored Cleveland in a game that saw 66 second-half points.

The Bengals were down four points at the 10:00 mark in the fourth quarter but scored two unanswered touchdowns–the second of which was the only non-offensive touchdown of the game, a 31-yard interception return for Deltha O’Neal.

Browns quarterback Kelly Holcomb threw for 413 yards and five touchdowns while Bengals running back Rudi Johnson rumbled for 202 yards and a pair of scores.

The highest-scoring game in NFL history is the only blowout on the list, as Washington ran away from New York in the nation’s capital.

Outside of receiver Charley Taylor (six catches for 124 yards and two touchdowns), no Redskins offensive player put up mind-boggling numbers. Instead, Washington was put in great position to score time and time again due to six Giants turnovers including five interceptions.

In the early days of the NFL there were a number of 0–0 games. The last recorded was in 1943, when the Detroit Lions met the New York Giants. Since then, the lowest scoring games have had 3 points. Here are the most recent.

On a cold Monday night, 57,704 fans congregated at Heinz Field to watch both offenses throw up zeros until a 24-yard field goal by Pittsburgh kicker Jeff Reed delivered the Steelers a win with seconds on the clock. The game featured less than 400 total yards for both teams combined and no receivers or running backs with more than 90 yards.

A good Jets team fended off a poor Redskins side on December 11 at Robert F. Kennedy Stadium via a first-quarter field goal. New York dominated the game in terms of stats but couldn’t find the endzone. Washington rushed the ball 15 times for just 39 yards and totalled only 150 yards of total offense on the day.

The pivotal act drew a protest from Dolphins head coach Don Shula to commisioner Pete Rozelle. Rozelle agreed what happened was unfair but wouldn’t change the result of the game.

Another game with infamously inclement weather, the Monsoon game in Tampa Bay produced seven fumbles. Notably, only five resulted in turnovers. Both teams attempted 13 passes and combined for 67 passing yards. The Buccaneers got a 19-yard field goal from Neil O’Donoghue in the fourth quarter to escape with a win.

Surprisingly, Neil O’Donoghue ended up making the game-winning field goal in two of the NFL’s lowest-scoring games. He hit a 30-yarder to give Buffalo the edge over Atlanta in the second quarter for this game’s only score. Quarterbacks Scott Hunter (Atlanta) and Joe Ferguson (Buffalo) combined to complete just 17 of 50 pass attempts and throw for 95 and 96 yards, respectively.

The original 3-0 NFL game was played between bitter rivals. Minnesota was one of the NFL’s best teams and overcame just 87 total yards of offense compared to Green Bay’s 301. Four turnovers stung the Packers and Fred Cox made good on a 25-yard field goal attempt in the fourth quarter to put the Vikings on top.