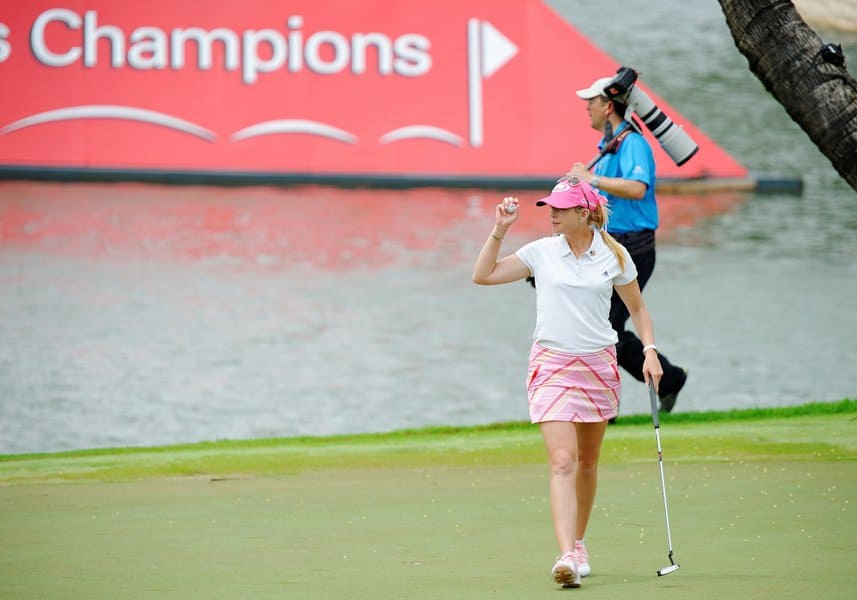 They compete in nail-biting competitions on the LPGA Tour and the European Tour. They often parlay their golf fame into successful modeling careers or become social media influencers. At the same time, many of these beautiful golfers focus on the sport and nothing else. They just happen to look hot as they win major tournaments, taking advantage of their popularity by rocking those cute little golf outfits. But don’t let these beautiful pro golfers fool you. They’re full of talent and skill. They can beat the very best the game has to offer. They just happen to look hot while dominating the sport of golf. 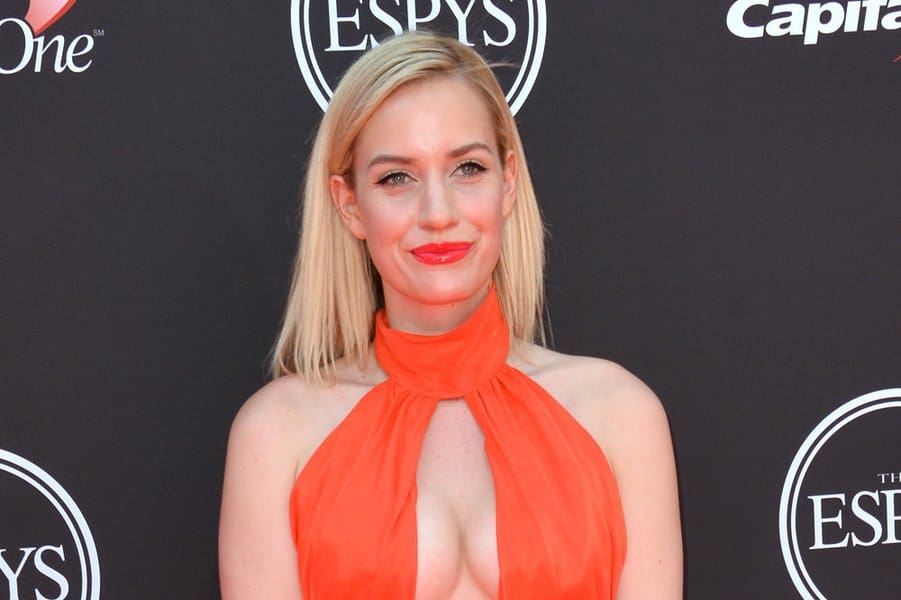 Former professional golfer Paige Spiranac focuses her attention on being a gorgeous model, golf instructor, and social media influencer. Although she no longer plays, Paige is so beautiful that she’s still one of the ten hottest female golfers of all time.

She was successful at college golf while attending the University of Arizona and San Diego. Paige had a short stint as a professional golfer where she had some success. However, Paige concentrates her time on being a popular social media personality with a massive following. 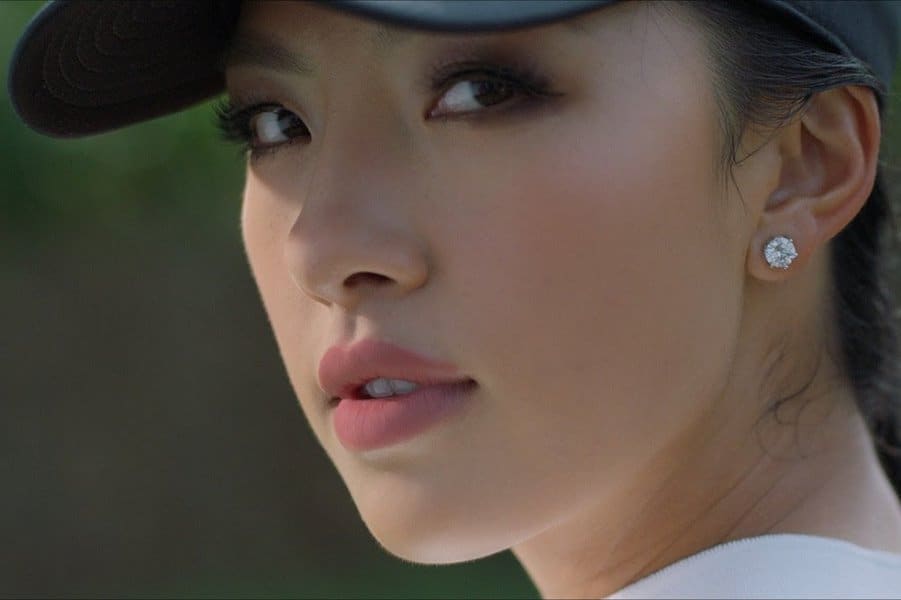 Lily Muni He is taking golf and hotness to a whole new level. She has everyone talking about her stunning beauty and unparalleled skills. The rising pro golfer currently plays on the LPGA Tour.

Lily has competed in numerous major championships and won the 2018 Symetra Tour. She has significantly impacted social media, posting alluring and hot images. She’s easily one of the hottest female athletes on the planet. 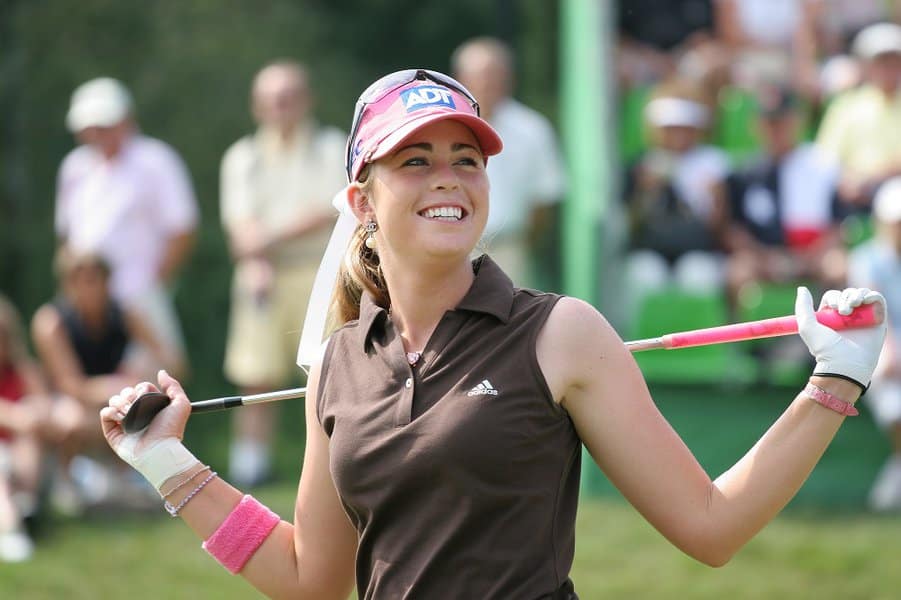 Paula Creamer is one of the best professional golfers in the world. She reached the number two spot on the Women’s World Golf rankings. She is one of the most dominant golfers, winning 10 LPGA Tournaments and the 2010 Women’s U.S. Open. Creamer is also one of the highest-earning golfers of all time and one of the ten hottest female golfers to enter the sport. 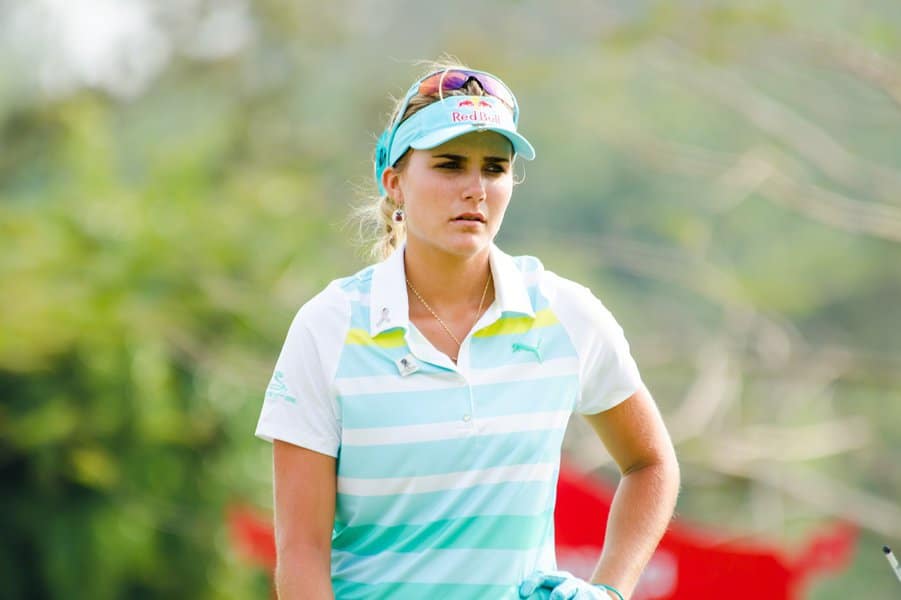 Lexi Thompson is one of the hottest female golfers of all time. Few compare to her sensual beauty, however, Thompson isn’t just a hottie with a body. She’s one of the best golfers on the LPGA tour. In fact, Thompson made several significant accomplishments in her illustrious career.

She became the youngest golfer to play in the US Women’s Open at the age of 12. She went on to win the Navistar LPGA Classic, the Dubai Ladies Masters, and the 2014 Kraft Nabisco Championship by age 19. 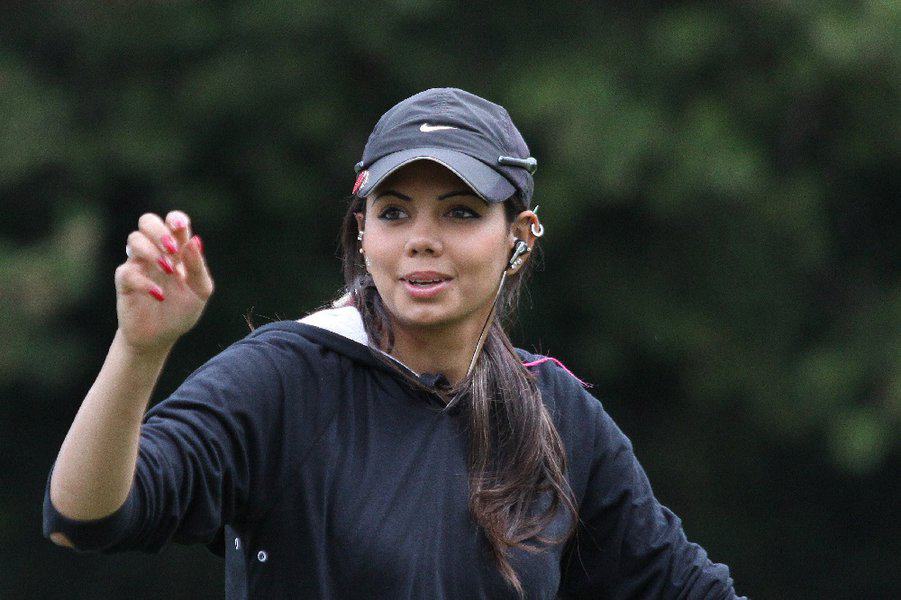 The stunning Indian golfer Sharmila Nicollet is taking the world by storm. She’s a lethal combination of talent and beauty. Her abilities and stunning looks caught the entire golf world’s attention. 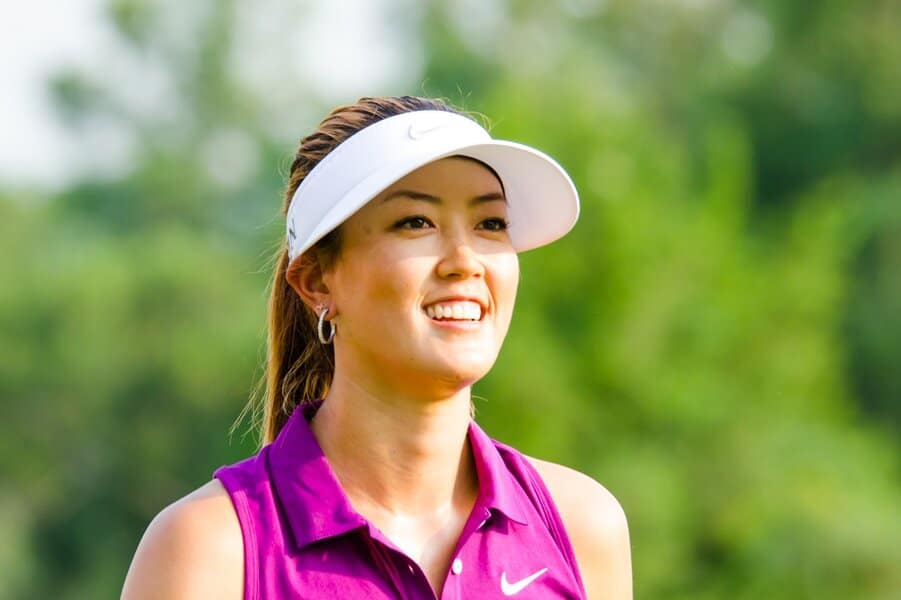 American golfer Michelle Wie is one of the most talented female players. She also happens to be one of the hottest female golfers. Of course, she’s more than just eye candy. Wie made history as the youngest player to qualify for an LPGA Tour. In 2014, she won her first major championship, the US Women’s Open. She’s easily one of the most beautiful ladies on the golf course. 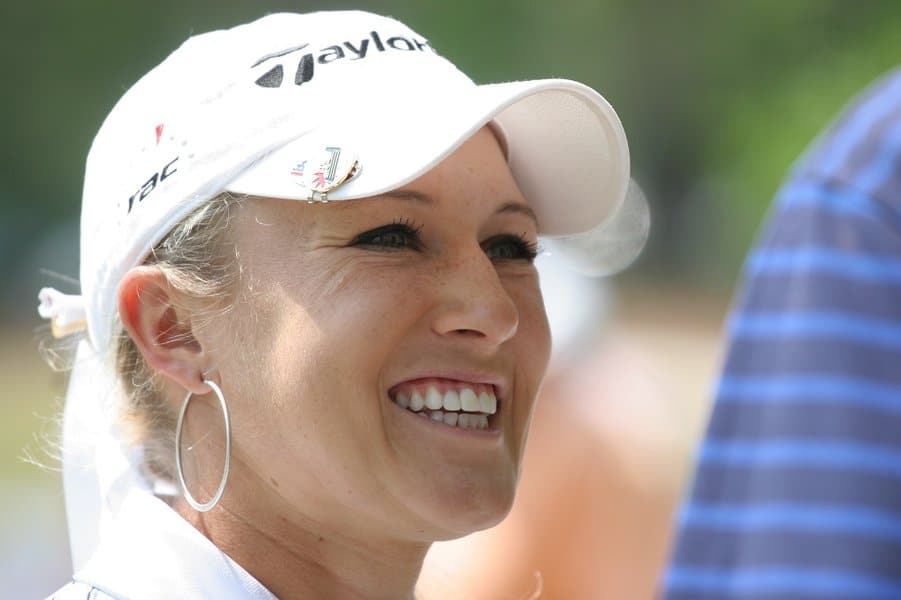 Professional golfer Natalie Gulbis combines skills, talent, and hotness perfectly. She’s another female golfer who has parlayed her talent and beauty into quite the career. Gulbis is a significant force on and off the golf course. She currently plays on the LPGA Tour in several major championship tournaments and is one of the hottest female golfers of all time.

In 2005, she created a buzz after releasing a sexy calendar that featured her in golf outfits and swimwear. Gulbis went on to appear in the Sports Illustrated Swimsuit Issue and FHM. 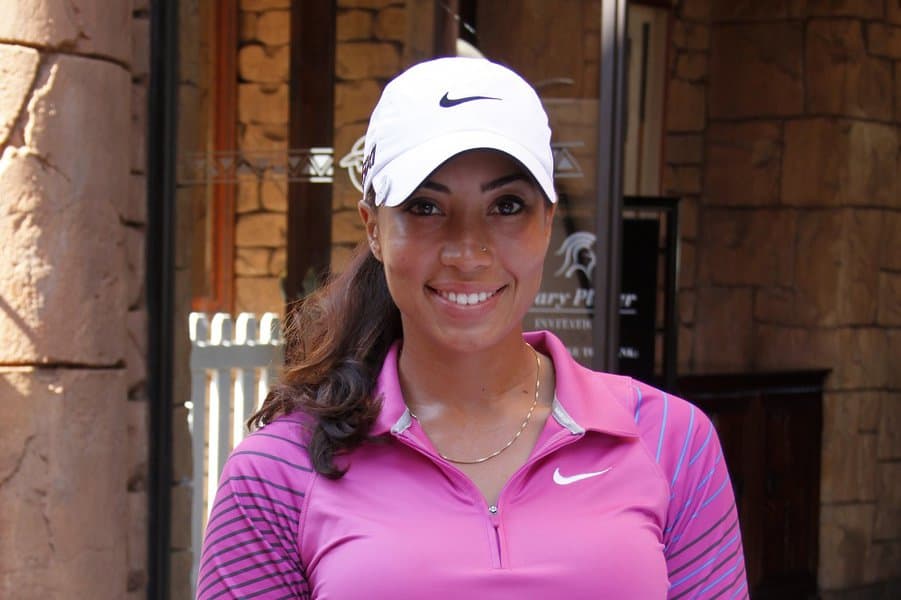 The beautiful American professional golfer Cheyenne Woods quickly rose to the top of the LPGA. It’s Woods’s destiny to be one of the greatest female golfers in history.

She’s the niece of iconic PGA golfer Tiger Woods and it turns out that being a great golfer runs in the family. Cheyenne doesn’t live in her famous uncle’s shadow though. She dominated the amateur circuit and soon joined the LPGA tour where she’s also one of the hottest female golfers. 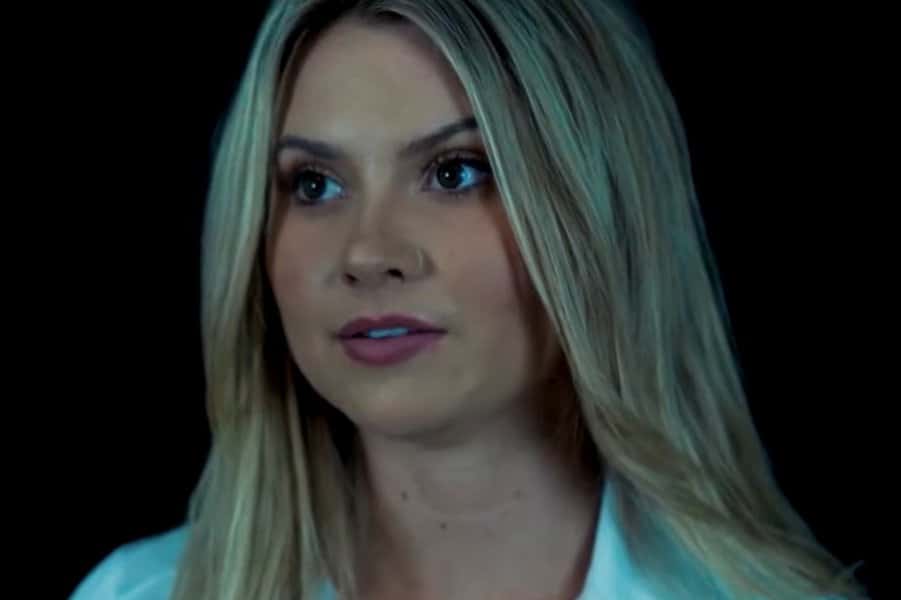 Lucy Robson might not be a professional golfer, but she’s undoubtedly one of the hottest. The beautiful and alluring Lucy Robson dominated college golf. The British golfer played at the University of South Florida and won the Treasure Coast Player of the Year two years in a row.

She hasn’t joined the LPGA but could give those ladies a run for their money. Lucy Robson concentrates most of her efforts on being an Instagram model who likes to golf. 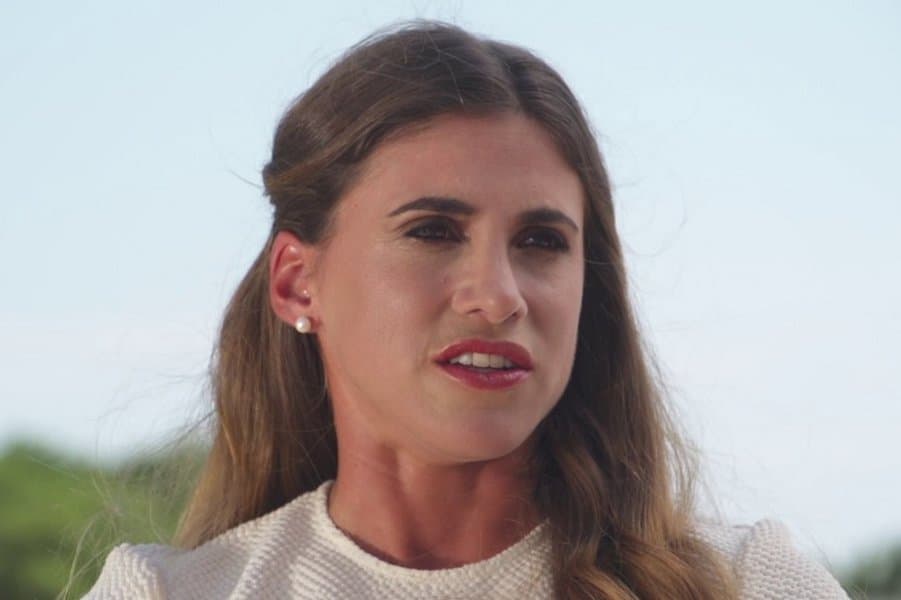 Spanish professional golfer Belen Mozo is setting the golf world on fire. She’s unstoppable on the golf course and in a bikini. Mozo is easily among the best female golfers as she competes on the Ladies European Tour and the LPGA Tour.

Mozo has been a dominant player since college and continues to thrive. Fans consider Mozo one of the most beautiful golfers. It’s safe to say she’s one of the hottest of all time. 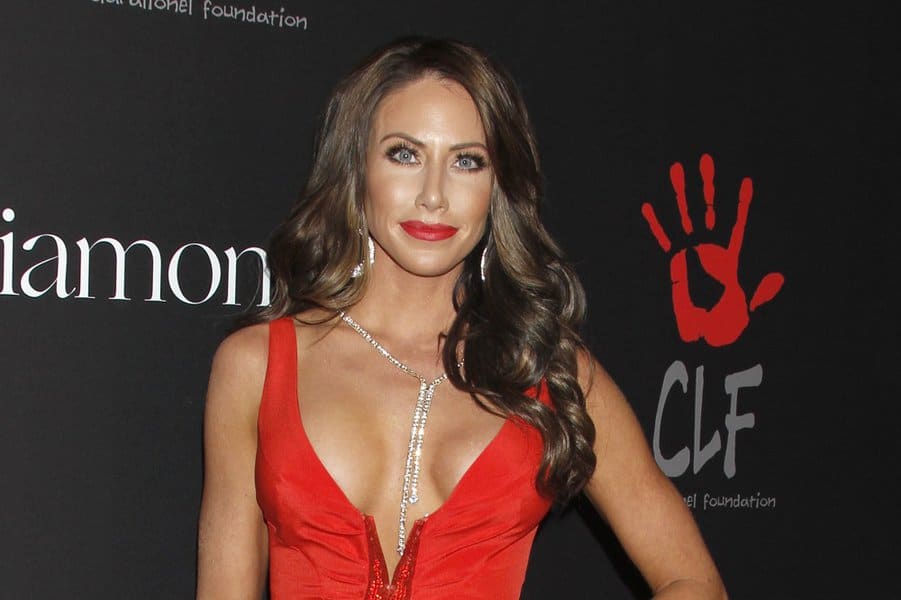 Holly Sonders is one of the hottest female golfers to swing a putter. Sonders was a stand-out player in college golf. She had a great deal of success before moving into a career as a news reporter.

Of course, golf always has a special place in her heart. Sonders is a famous social media influencer and model. The stunning and sexy golfer often posts steamy images to social media. 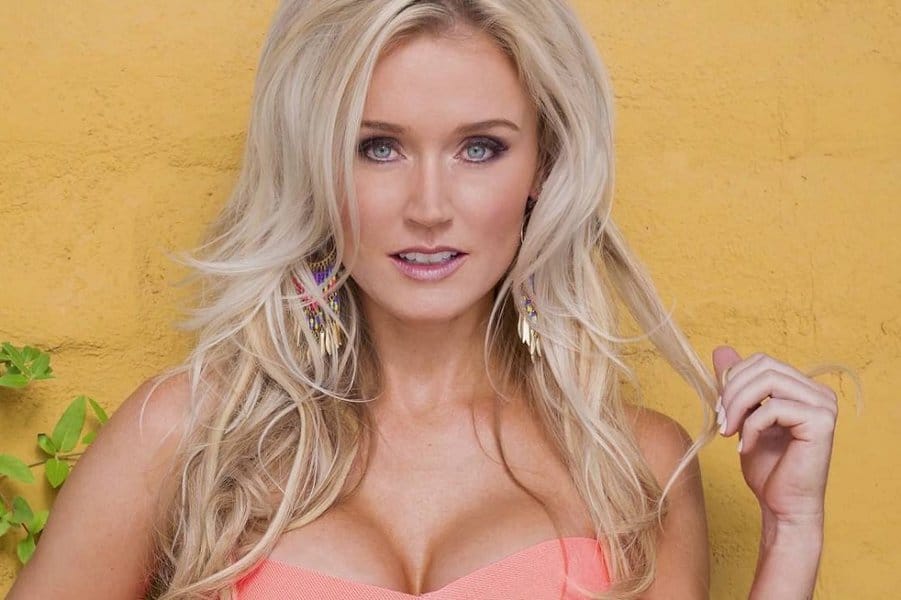 Blair O’Neal built her reputation as one of the best female golfers to pick up a club. After graduating, O’Neal turned pro but withdrew from the LPGA Futures Tour due to a broken foot. She returned years later and won the Golf Channel reality series Big Break: Dominican Republic.

O’Neal’s career then took off and she returned to the LPGA in the Symetra Tour. After retiring, O’Neal found success as a model and TV host on the Golf Channel. Without a doubt, O’Neal is one of the hottest female athletes in history. 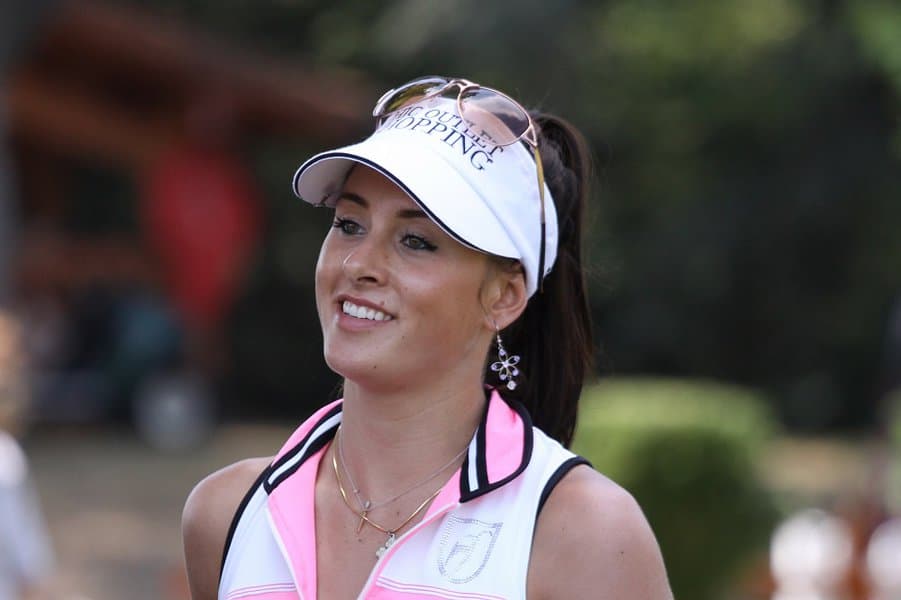 It’s impossible to talk about the hottest golfers without mentioning the sizzling hot Russian golfer Maria Verchenova. She’s more than just a pretty face with legs that go for days.

Verchenova made history by becoming the first Russian full-time member of the European Tour. In 2016, she qualified for the Russian Olympic team. Verchenova is one of the most beautiful athletes today. 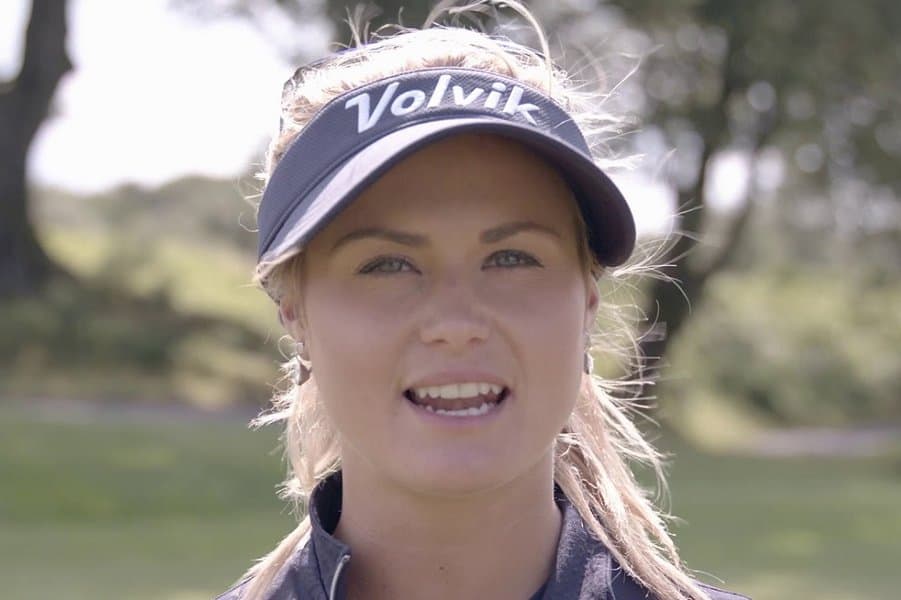 Carly Booth comes from a family of golfers. She was truly born to swing a club. The incredible golfer is one of the most beautiful athletes. At 17 she became the youngest Scottish golfer to join the Ladies European Tour. She continues to cement her legacy in the sport. She also happens to be one of the hottest female golfers. 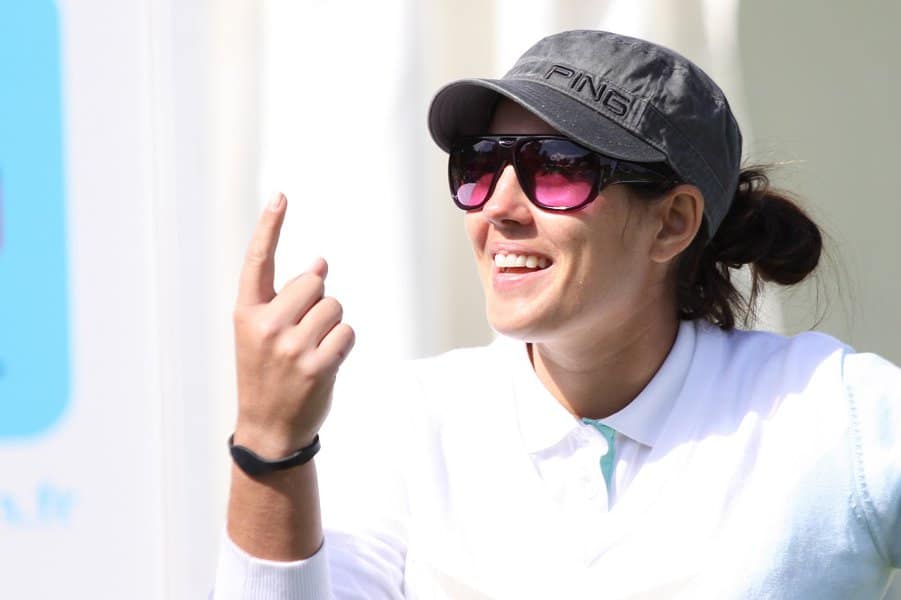 Nikki Garrett is easily the most beautiful golfer from Australia. But like all the ladies on this list, she doesn’t rely on her good looks to get by. Garrett is among the most skilled golfers on the Ladies’ European Tour.

She also happens to be one of the hottest female golfers. In Garrett’s rookie year, she won the Ryder Cup Wales Rookie of the Year. Garrett continues to rise to the top of the sport while looking good. 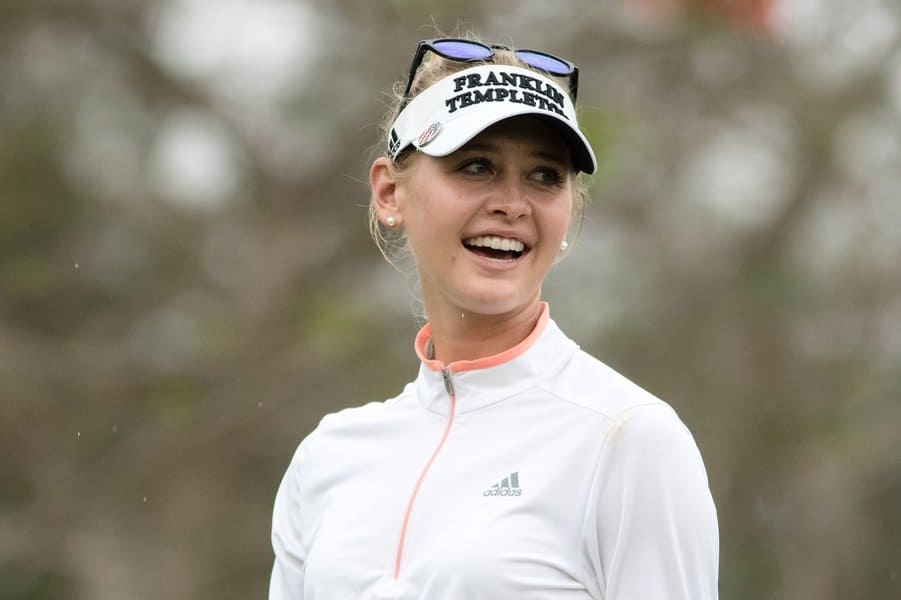 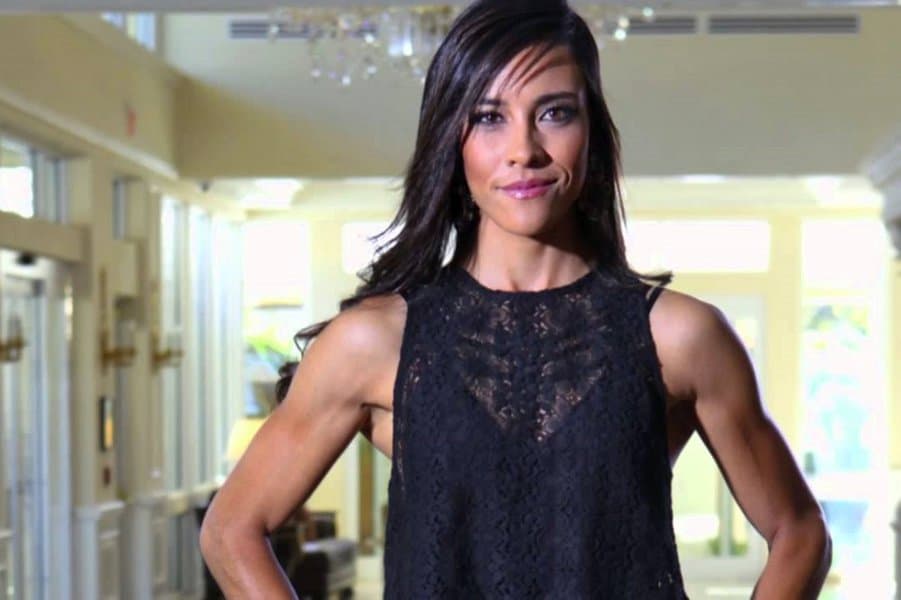 The beautiful Veronica Felibert is the talk of the golf world. She’s a skilled player that is quickly making an impact on the sport. Indeed, she often steals the spotlight anytime she sets foot on the golf course. Her incredible beauty and skills make her an unstoppable force in women’s golf. Undoubtedly, she’s one of the hottest female golfers today. 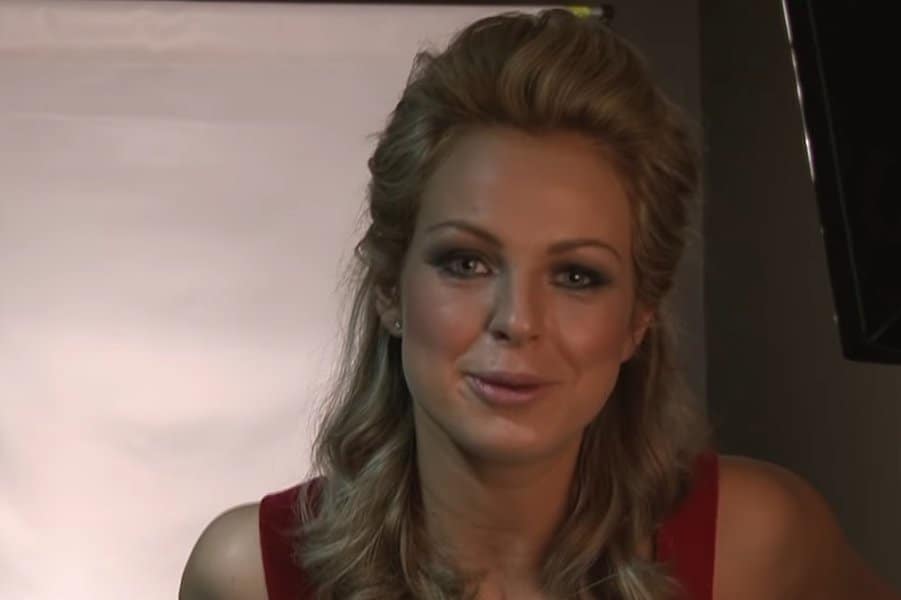 Nowadays, Sophie Horn focuses her attention on being a show-stealing sexy model. She sets the world on fire with her alluring photoshoots. Earlier in her career, Horn was a show-stealing sexy golfer. She had some minor success before switching careers. Regardless, Horn will go down in history as one of the hottest female golfers. 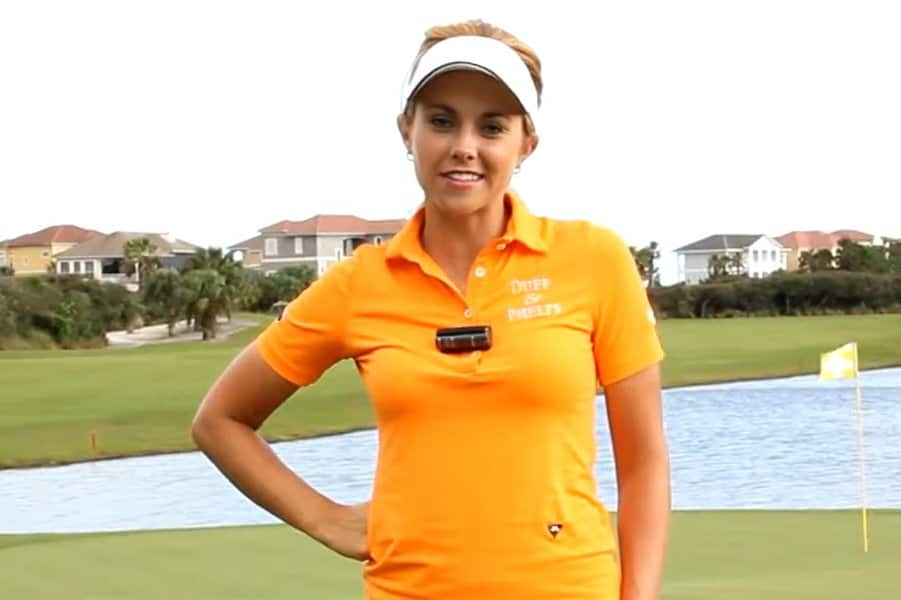 Kathleen Ekey is one of the most beautiful female golfers on the LPGA Tour. Her talent and incredible beauty make her an unforgettable player. In 2009, she turned pro and had an impressive showing on the Futures Tour. It’s no surprise that fans consider her one of the hottest athletes of all time. 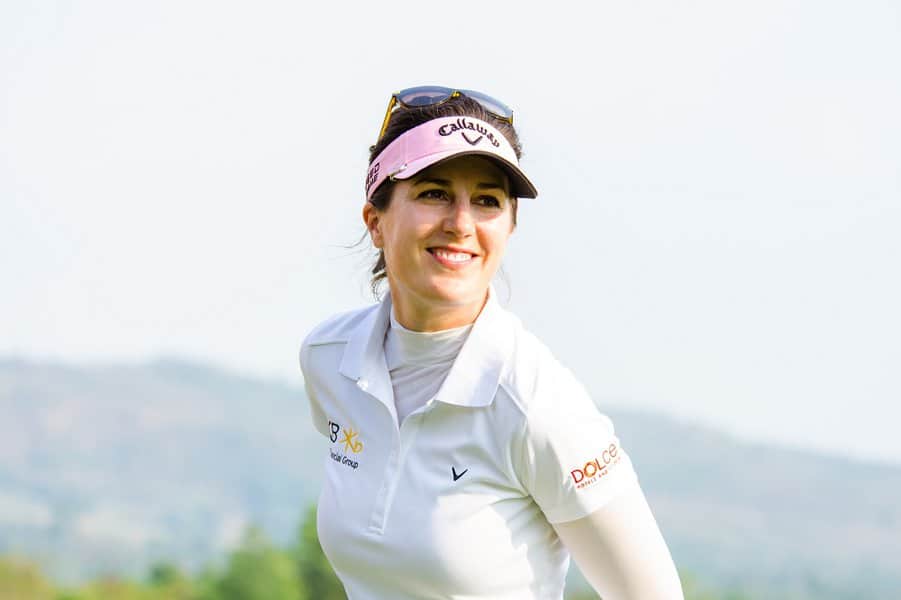 Fans also consider German golfer Sandra Gal one of the hottest female stars. The six-foot-tall Gal currently competes on the LPGA Tour with the best female golfers. She has competed in numerous tours and won the 2011 Kia Classic. However, she also gained attention for her beauty and long legs.

See more about - The 10 Best Golf Movies Of All Time