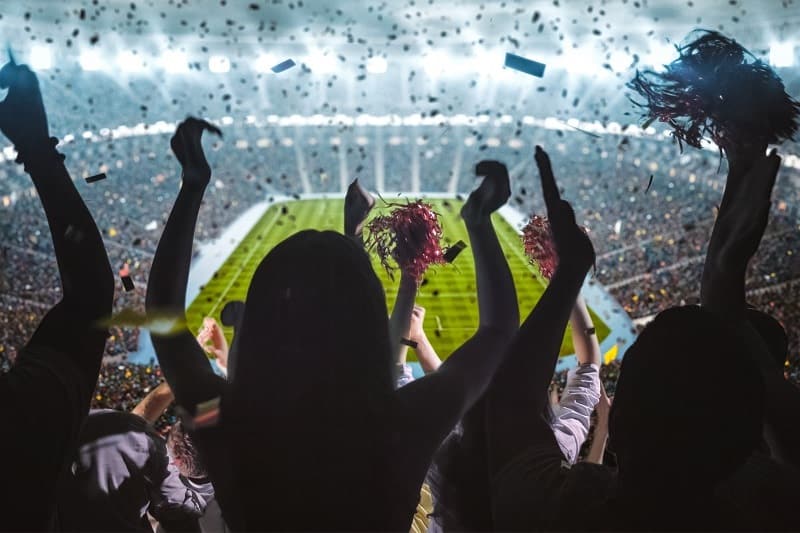 The 10 Largest College Football Stadiums in the US

Fall is synonymous with American football. College football in particular is deeply rooted in tradition, and one of those traditions is massive stadiums.

The NCAA reports that over 39 million people attended a Division I college football game in 2019 and average attendance across was more than 41,000.

However, it’s not uncommon for a college football game to draw a crowd of over 100,000 people. In fact, eight of the country’s 10 largest college football stadiums can easily accommodate that many fans.

For comparison, even the biggest NFL stadium – MetLife Stadium, home to both the New York Giants and New York Jets – seats 82,500.

Interestingly, college football’s “Big Ten” stadiums (pun very much intended) aren’t concentrated in any one powerhouse division, but instead spread across the country. 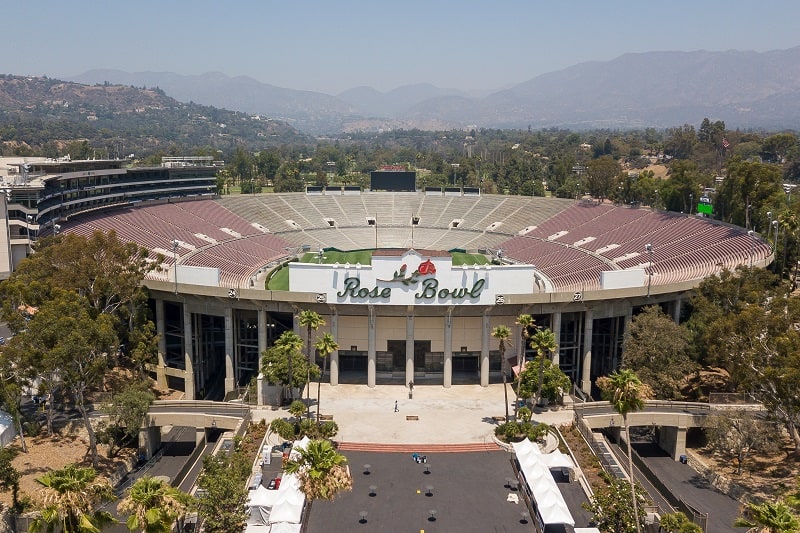 The Rose Bowl is easily one of the most iconic sports venues, period. This is largely because it’s the home of the Rose Bowl Game, AKA “The Granddaddy of Them All,” the oldest college football bowl game in existence. It was first played in 1902 and has been played every year since 1916, usually on New Year’s Day.

Five Super Bowls have been played at Rose Bowl Stadium, as well as gold-medal Olympic soccer and track matches.

The stadium is a U.S. National Historic Landmark and in 2019, Sports Illustrated named it the No. 1 Greatest Stadium in College Football History, stating “there is simply not a bad seat in the house.”

From 1972-1997, the Rose Bowl was the largest college football stadium in the U.S., with a capacity of 104,091. After extensive seating reconfigurations, the capacity was reduced to the current 91,136. 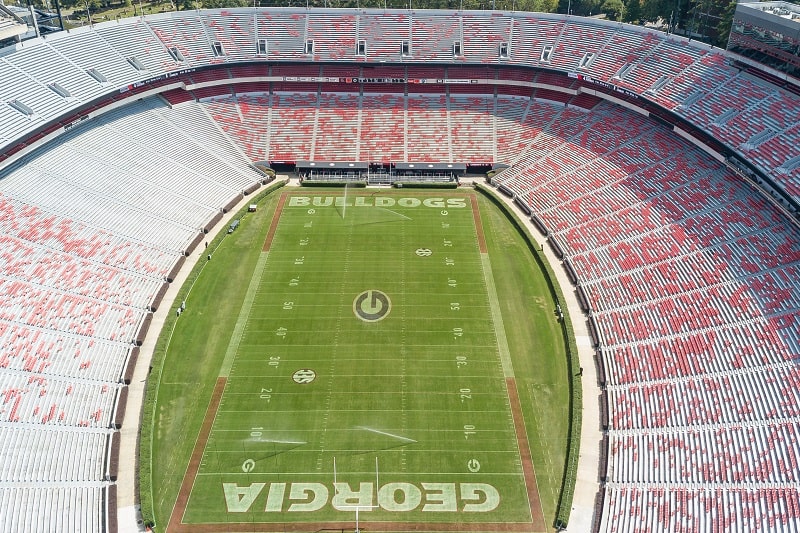 Sanford Stadium is widely considered one of the most beautiful and unique college football stadiums, primarily because of its signature Chinese privet hedges. The hedges line the football field completely and were originally planted in 1929. They’ve been removed and re-planted twice, once to make room for a soccer field in the 1996 Olympics and again in 2017 to accommodate a new scoreboard and locker room.

As rivalries run deep in the SEC, it should come as no surprise that the Bulldogs’ beloved hedges have frequently been vandalized, including opponents urinating on them. The vandalism doesn’t deter fans though: Georgia football has one of the best attendance ratings in college sports, with Sanford Stadium nearly always at 100% capacity. 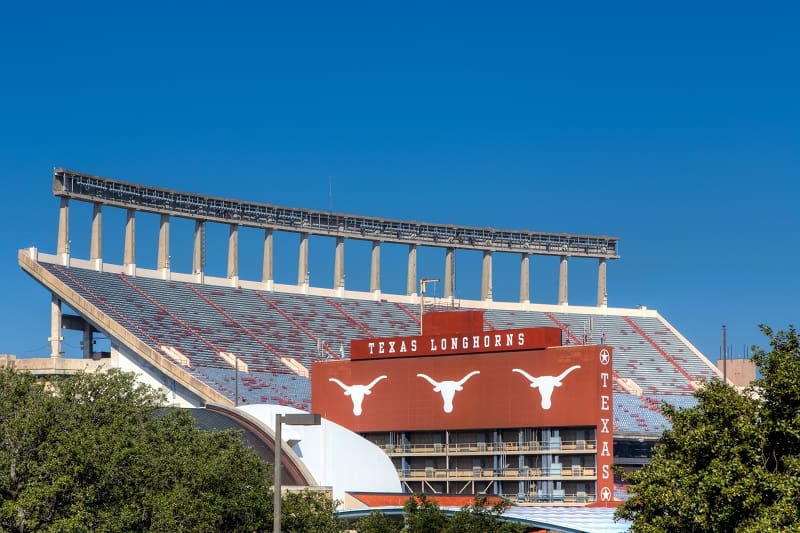 If the size of its football stadiums is any indication, everything really is bigger in Texas. DKR-Texas Memorial is tremendous, but even more impressive is the state-of-the-art amenities student-athletes and staff have access to. There are hydrotherapy and plunge pools, golf putting greens, nutrition bars, and even a gaming lounge in the locker room.

In August 2020, UT’s Board of Regents approved a $175 million renovation plan that includes adding a stadium club level that will run the entire length of the southern end zone. Interestingly, the project will not increase seating capacity at all. Then again, 100,000+ seats seem like plenty. 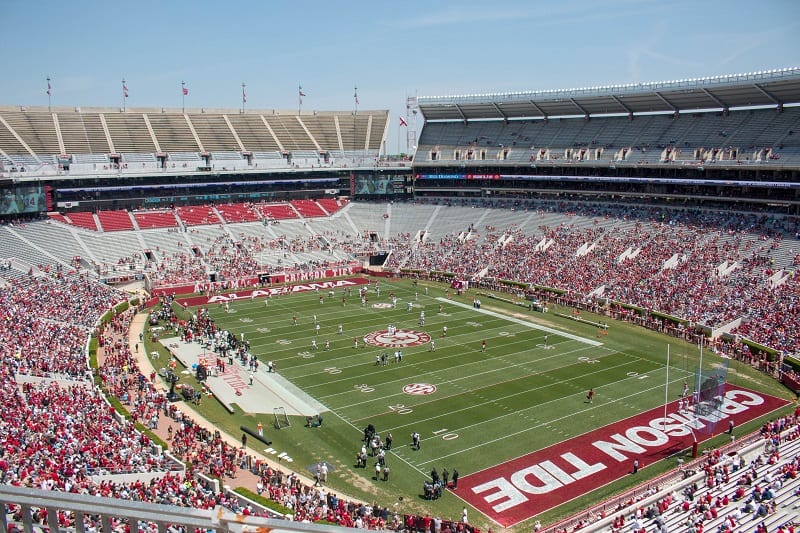 The enormous home of the Alabama Crimson Tide is named after George H. Denny, the university’s president from 1912-1936, and legendary head coach Paul “Bear” Bryant, one of the winningest coaches in college football history.

Bryant-Denny Stadium was built in 1929 with a seating capacity of 12,000, and eight major expansions since have increased the capacity to today’s 101,821. The nearly-100-year-old stadium is visible from almost anywhere in Tuscaloosa, and locals say it’s the best place in town to watch a sunset. 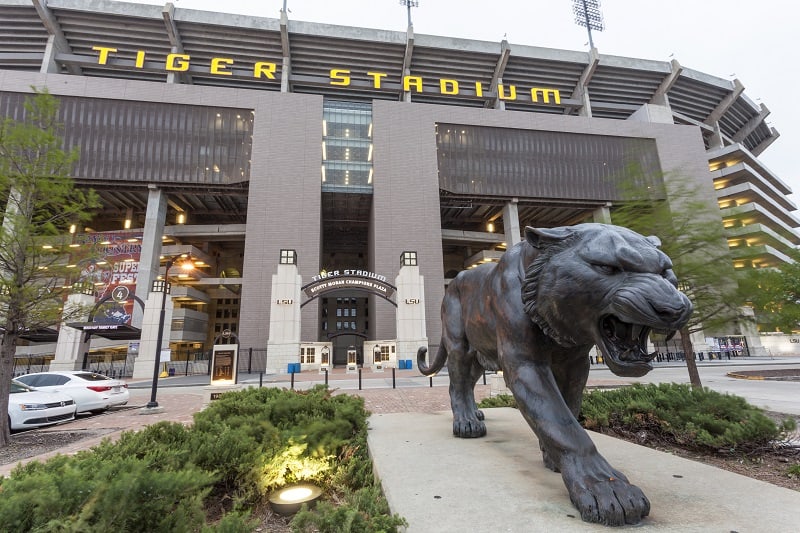 In a nod to how dominant the LSU Tigers have become, Tiger Stadium is often referred to as “Death Valley.” One of the stadium’s other popular nicknames is “Deaf Valley” because of how deafeningly loud the crowd is. Living up to both nicknames, the crowd reacted so intensely to a game-winning touchdown in a 1988 game against rival Auburn that it actually registered on a seismograph.

In other words, it was enough to officially register as an earthquake. When the stadium’s 102,321 seats are filled to capacity – which is almost every home game – it is indeed one of the most intimidating environments in all of college football. 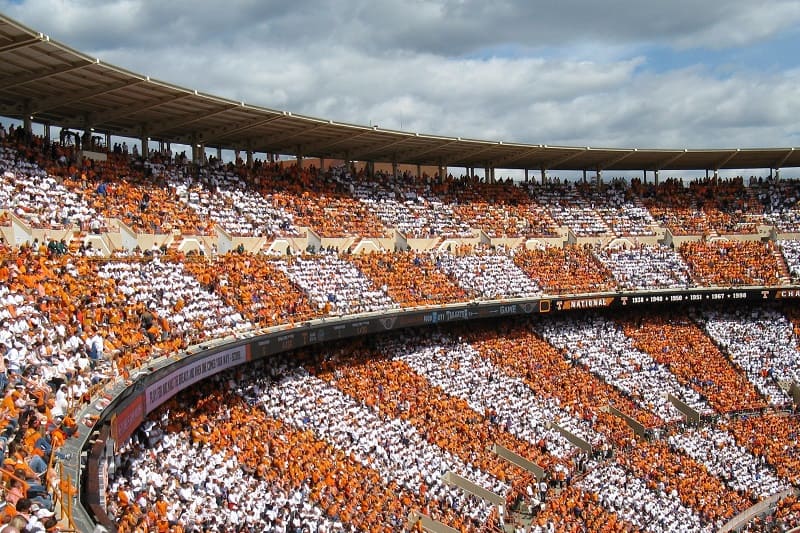 Built in 1921, UT’s Neyland Stadium is about to celebrate a century. The majestic towering two-tier stadium isn’t just big by college football standards – it’s one of the largest stadiums of any kind in North America. Although its official capacity is 102,455, Neyland Stadium managed to hold a stunning 109,061 people in a 2004 game against Florida.

In addition to being the home of the Volunteers, Neyland Stadium hosts a number of NFL exhibition games, concerts, and other live events. It also frequently tops “best of” lists, including Sports Illustrated‘s “best college football weekend experience” and Sporting News’ Best College Football Stadium. 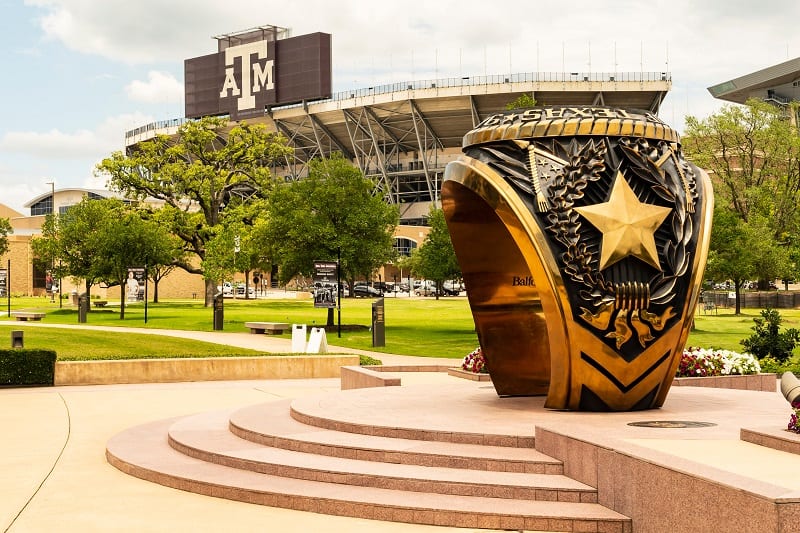 Kyle Field isn’t just one of America’s biggest college football stadiums – it’s also one of the oldest. A&M professor and alumnus Edwin Jackson Kyle donated a parcel of land for an athletic field in 1904, then bought materials and assembled bleachers with his own money. His efforts were well worth it, as the Aggies won their first National Championship in 1919. Texas A&M also had a literal perfect season that year, not giving up a single point.

Today, Kyle Field is known as one of the most enthusiastic college stadiums. A&M fans are collectively referred to as the “12th Man,” stand throughout entire games, and “Maroon Out” when the Aggies are home, wearing maroon to make their presence even more formidable. 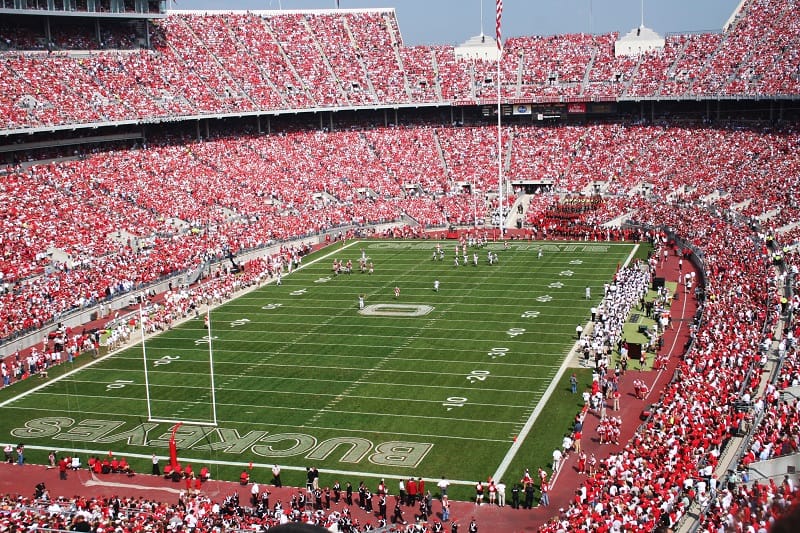 Even if you’re not a Buckeyes fan, this is one of the best places to watch a football game, as “The Shoe” is symbolic of football’s traditions and rivalries. As a testament to that, the largest crowd to ever fill Ohio Stadium was a whopping 110,045, for an intense rivalry game against Michigan in 2016. The Buckeyes won 30-27 in double overtime.

Another stadium that’s nearly a century old, the first game was played at Ohio Stadium in October 1922, when the capacity was 66,210. The largest game crowd was just 17,000 prior to the stadium being built, but fans quickly began filling the new stadium to capacity. In fact, although it’s not the biggest college football stadium, Ohio Stadium has the second-best attendance rating, with a 2018 capacity of 103.63%. 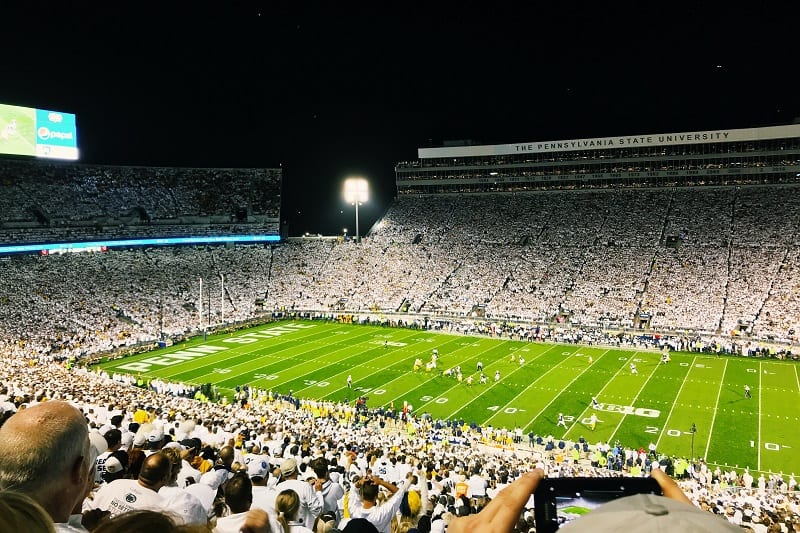 Penn State’s Beaver Stadium is widely regarded as one of the best college football game-day environments. It also has a fascinating history. After a couple of different wood stadiums were built in the early 1900s – the first with a capacity of just 500, New Beaver Field was eventually made of steel in 1936. The stadium had to be relocated across campus in 1960, and doing so required that it be disassembled and transported one mile, piece by piece.

Today, the Nittany Lions enjoy one of the biggest student sections in college football and they take their cheering duties seriously. For the past 40 years, student seats at Beaver Stadium have consistently sold out in a matter of minutes, and the annual “White Out” tradition that started in 2004 has only strengthened their spirit. 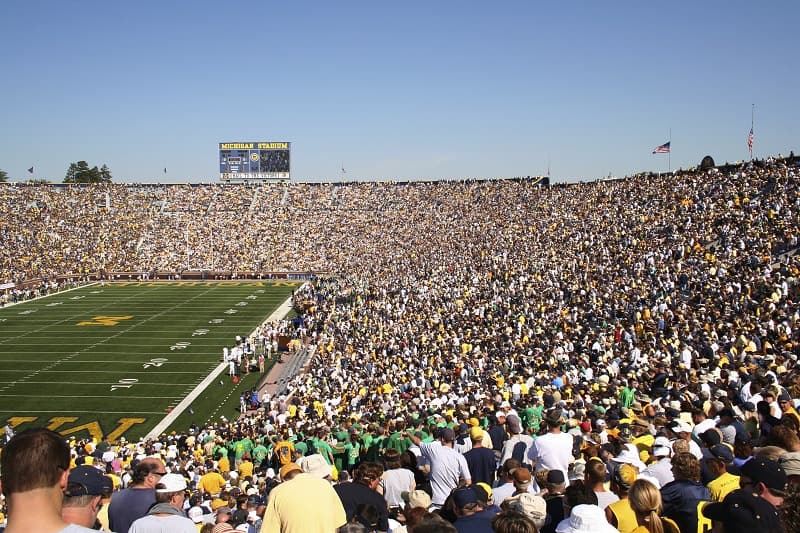 “The Big House” is a well-earned nickname. Not only is Michigan Stadium the largest college football stadium in the country, but it’s the third-biggest non-racing stadium in the entire world. The Wolverines’ Michigan Stadium also lays claim to the largest crowd ever recorded for a single football game, which was 115,109 people when rival Notre Dame came to town in 2013.

Interestingly, the previous record of 114,804 fans was set two years prior, also at Michigan Stadium – also when Notre Dame was visiting.