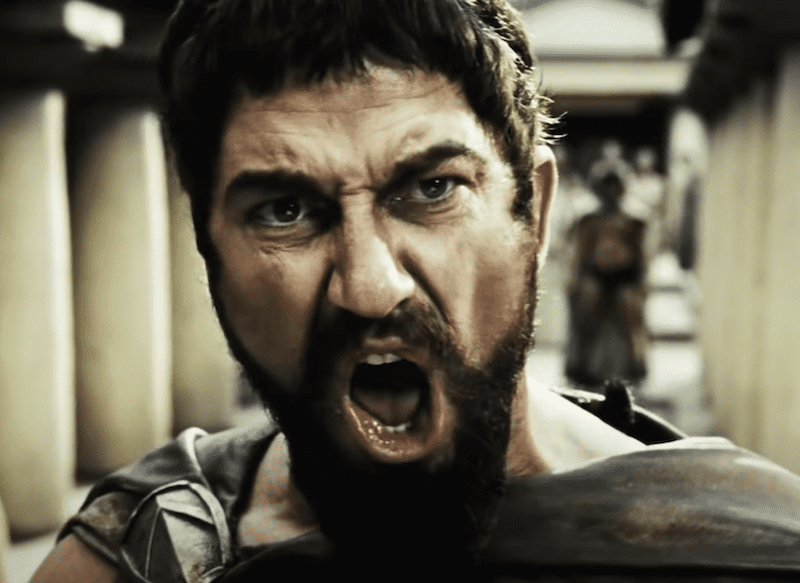 Zack Snyder cemented his credentials as a director with the action-packed 300 in 2006. Adapted from Frank Miller’s graphic novel of the same name, the movie centers on Gerard Butler’s King Leonidas, who leads 300 Spartans into battle against 300,000 Persian soldiers controlled by “God-King” Xerxes. Somehow Leonidas and his men wipe out the first few waves of Persian soldiers, and it’s not until they are betrayed by one of their own that they finally suffer defeat and are killed in their last stand against the massive rival army.

Movies like 300 are few and far between. Not only does the movie feature epic battles but it was filmed with a superimposition chroma key technique, meaning all the acting took place in front of green screens, with the backgrounds, which resemble the art from the graphic novel, added after. This gives 300 a unique look and feel that makes it stand out from your average historical drama.

If you love 300 as much as we do at Next Luxury, then you’re probably looking for similar films to enjoy. While it’s hard to find movies that use the same filming technology (besides Sin City and The Spirit), there are plenty of sword and sorcery epics and historical dramas that 300 fans will enjoy watching. 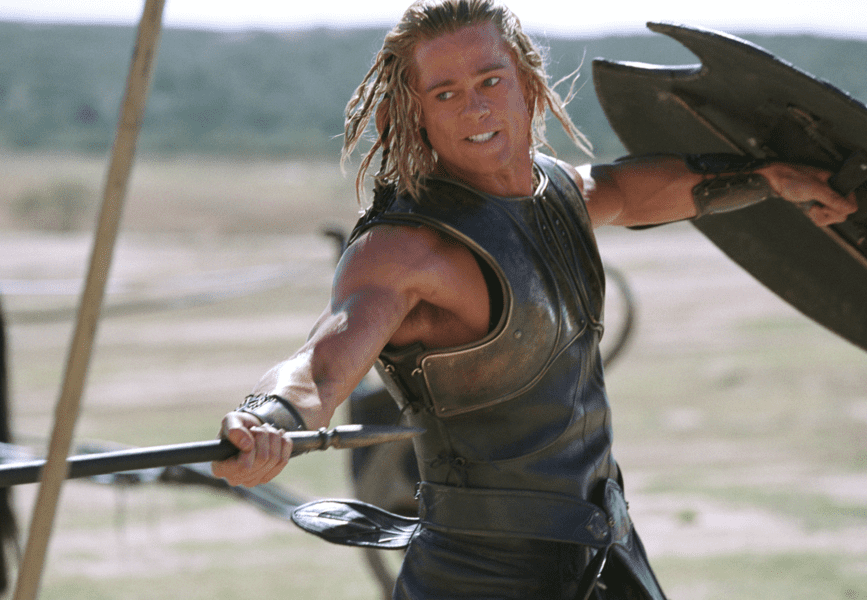 Based on Greek mythology and history, Troy tells the classic tale of the Trojan War. Based on Homer’s Iliad, the story revolves around the quarrel between Achilles and Agamemnon and the Greek army invading Troy by hiding in a wooden horse (very clever). Directed by Wolfgang Petersen from a script by future Game of Thrones creator David Benioff, Troy has everything you want from a historical epic.

There’s a love story, an involving but easy-to-follow plot, and plenty of action. The cast is also stacked, with Brad Pitt, Eric Bana, Orlando Bloom, Diane Kruger, Brian Cox, Brendan Gleeson, Rose Byrne, Sean Bean, and Peter O’Toole all popping up. Grossing a whopping $497.4 million at the worldwide box office, Troy was a commercial smash, although not all the critics agreed.

A remake of the 1981 masterpiece (the special effects are incredible for the time), this big-budget epic was a massive hit for Warner Bros. Pictures. Based on another Greek myth, Clash of the Titans revolves around the story of Perseus, who must battle the gods for humanity’s survival. If you enjoy big, dumb action movies with a historical edge, then Clash of the Titans is for you.

There’s a bit too much going on plot-wise, but the special effects are second to none, and the cast is even better. Aussie newcomer Sam Worthington takes the lead as Perseus and is ably supported by Liam Neeson, Ralph Fiennes, Gemma Arterton, Mads Mikkelsen, Liam Cunningham, and Nicholas Hoult. There are also plenty of small cameos from famous faces as minor gods seen throughout the movie.

“Are you not entertained?” Director Ridley Scott’s historical drama about a former Roman general who is betrayed and finds himself rising up the ranks as a gladiator looking for revenge is one of the best movies of the past two decades. Russell Crowe, in his breakout performance, is memorizing as Maximus Decimus Meridius. Betrayed by the new King Commodus (a wicked Joaquin Phoenix) and left for dead, he finds himself fighting for his life and his freedom as a gladiator, leading him to the Colosseum where he seeks “vengeance in this life or the next.”

Words don’t do justice to how incredible this film is. Everyone is firing on all cylinders, with Crowe and Phoenix delivering some of their best performances of all time. While the historical accuracy of the film is up for debate, many of the characters and situations that occur are based on real life. Gladiator won five Academy Awards –  Best Picture, Best Actor for Russell Crowe, Best Visual Effects, Best Sound, and Best Costume Design – and proved that there was an audience for historical epics.

Similar to Gladiator, Braveheart is another historical epic that has a basis in real life. Sir William Wallace (a brilliant Mel Gibson before he fell off) was a 13th-century Scotsman who fought for Scotland’s freedom in the First War of Scottish Independence against England, which at the time was ruled by King Edward I (Patrick McGoohan). It follows Wallace as he slowly gains the trust of his fellow clansman who band together to dispatch the English invaders.

Shot in Scotland and Ireland, the majestic rolling hills and vicious battle scenes are impressive, as is Randall Wallace’s tight script which includes the famous “Freedom” speech that helped Braveheart win five Academy Awards, with Gibson picking up Best Director.

Michael Fassbender gets his hands bloody in this action-packed thrill ride from Neil Marshall. Fassbender plays Quintus Dias, a centurion at a Roman outpost that is besieged by the Picts, northern warriors in the Scottish highlands. Outnumbered and fighting to stay alive, Fassbender and his small group of warriors must try and make it to safety before they are caught and killed. While the reviews for this one aren’t positive, Marshall is great at directing action scenes, something this film has plenty of.

Another movie loosely based on actual events, Centurion might fail when it comes to its poor storyline but it’s the cast and the action that elevates it above other flicks and makes it worth a watch.

Greek mythology makes for great movies as Immortals attests to. Inspired by several different Greek myths, including the story of Theseus, the return of the Heraclids, the Minotaur, and the Titanomachy, Immortals covers a lot of ground during its 110-minute run time. Henry Cavill plays Theseus, a mortal chosen by Zeus to take down Mickey Rourke’s King Hyperion.

As is often the case with these types of movies, the special effects are incredible but the storytelling leaves much to be desired. The main problem is the filmmakers tried to fit too much into one story. But if you’re just wanting to watch a fun action movie with lots of swordplay then Immortals will be right up your alley.

Tom Cruise is a former U.S. Army Captain Nathan Algren who is tasked with turning a bunch of Japanese peasants into a well-drilled bunch of warriors who will become part of the new Imperial Japanese Army. The army has been formed to take on the rebelling samurai warriors, and in their first battle, are slaughtered by Cruise, who is saved by the samurai leader Ken Watanabe.

Spending time with the samurai, Cruise soon becomes sympathetic to their cause and integrates himself into their culture, learning Japanese and the ancient art of kenjutsu, which is Japanese swordsmanship. Cruise and Watanabe develop respect for each other, with Cruise eventually joining Watanabe in his fight against the emperor.

This is peak Cruise, who is in wonderful form and aided by a terrific script and a fantastic support cast that features many famous Asian actors and actresses. While there has been some criticism of the film, partially the white savior narrative, for the most part, both critics and fans agree The Last Samurai is a fantastic movie.

Dwayne Johnson gets to flex his muscles in this $100 million budget film about the legend of Hercules. The Rock is perfectly cast as the muscle-bound hero who leads a group of mercenaries across the land before they are hired to train Lord Cotys’ army so they can defeat his brother Rhesus. The plot is a little wobbly at times, borrowing from various stories and events in Greek mythology, but there is no denying Johnson’s star power, although he’s no Kevin Sorbo.

Based on a series of comics, Hercules is a decent sword and sorcery film that hints at the greatness that was to come for The Rock, who is the main reason to watch this movie.

There are several solid movies about Robin Hood, and while Russell Crowe’s 2010 effort is fine, it doesn’t hold a candle to Kevin Costner’s 1991 take on the famous character. Robin Hood: Prince of Thieves follows the exploits of the thief Robin Hood, who steals from the rich to give to the poor.

Of course, this is Hollywood, so things are a bit different, with Robin Hood and his new friend Azeem Edin Bashir Al Bakir (Morgan Freeman) joining forces with Little John and his band of merry men to defeat the evil Sheriff of Nottingham (Alan Rickman). All the familiar characters from the Robin Hood legend appear – including Mary Elizabeth Mastrantonio as Lady Marian and Christian Slater as Will Scarlett – with this fun romp combining all the best elements of Robin Hood with a good dose of humor.

If you really love 300, then you have probably already seen the sequel 300: Rise of an Empire. While nowhere near as good as the original, this follow-up has enough action to keep you juiced up across its 102-minute run time.

The film takes place before, during, and after the events depicted in 300, with Aussie actor Sullivan Stapleton taking center stage as Greek leader Themistocles. He must fight the Persians on the sea, with the navel battles depicted in the movie based loosely on the Battle of Artemisium and the Battle of Salamis.

Many of the original cast returned (including Lena Headey, Peter Mensah, Rodrigo Santoro, and David Wenham) while the soundtrack was produced by Junkie XL. As mentioned, this movie isn’t on par with the first, but it did make $337 million worldwide and makes for a great double bill with 300.

Similar to Robin Hood, there are several movies based on the legend of King Arthur, with the most recent being 2017s King Arthur: Legend of the Sword. Directed by Guy Ritchie and starring Charlie Hunnam as the title character, it’s an absolute dog’s breakfast. That’s why Antonine Fuqua’s 2004 take on the Arthurian legend gets our tick of approval.

The movie follows Arthur and his gang as they go up against the might of the Saxon army, with the battle scenes great and the cast all in good form. While it does borrow from supposedly real-life events, King Arthur is a fictional take on Arthur and his adventures that makes for a great Saturday night on the couch watch.

After the success of Gladiator, Ridley Scott went back to the well with the historical drama Kingdom of Heaven. Set during the Crusades, the film is loosely based on the life of Balian of Ibelin (Orlando Bloom), a humble blacksmith who rose through the ranks of the King’s army to become a key figure in protecting the English in Jerusalem from the Saracens.

While a few films on this list have been described as epic, Kingdom of Heaven takes the cake. The standard version is just over two hours and 20 minutes, while the director’s cut runs for over three hours.

As you can imagine, this is another movie with a stacked cast that has some incredible battle sequences. Although not as well received as Gladiator, this movie is interesting enough, with the director’s cut well worth your time if you’ve got three-plus hours to spare.

Alexander the Great was the all-powerful king of Macedonia who conquered much of the Western world during his 32 years on the planet. Oliver Stone decided to tell his life story in this big-budget movie starring Irishman Colin Farrell as Alexander. Despite the presence of his accent, Farrell does a decent job, with Stone’s script focusing on the major moments of Alexander’s life.

The hardest thing you have to decide is which version of Alexander to watch. There’s the theatrical cut and then three more versions released on DVD and Blu-Ray: the 2005 “Director’s Cut,” the 2007 “Final Cut,” and the 2013 “Ultimate Cut.” We recommend Alexander Revisited: The Final Unrated Cut, which is the highest-grossing of the three special editions.