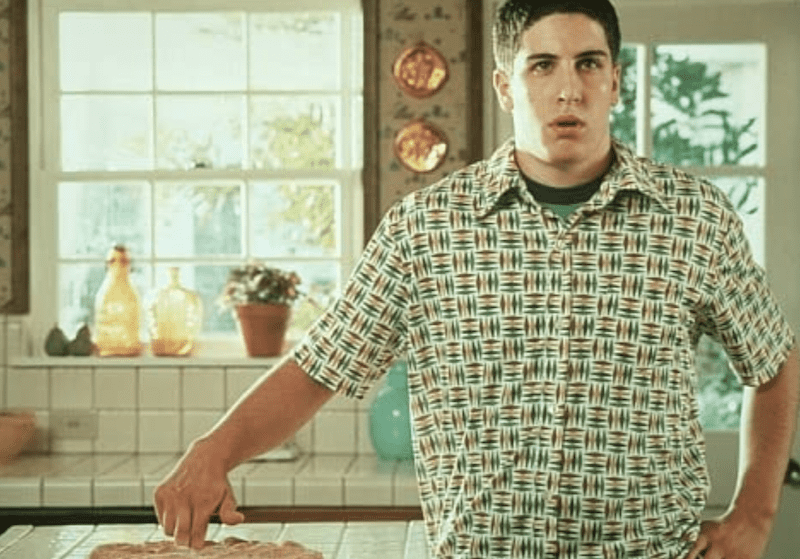 American Pie is one of the funniest movies of the 90s. Focusing on four friends who are determined to lose their virginity before graduation, it’s a hilarious and raunchy comedy that was a box office smash. Movies like American Pie helped reignited the high school comedy genre, with many similar movies following suit.

The adventures of Jim (Jason Biggs), Oz (Chris Klein), Kevin (Thomas Ian Nicholas), Paul (Eddie Kaye Thomas), and their annoying mate Steve Stifler (Sean William Scott) will have you rolling on the floor with laughter while simultaneously cringing at their antics. You’ll never look at apple pie the same again.

The movie is a time capsule of the late 90s and helped kick-start the career of many of the actors who have gone on to do great things. Along with the main cast, the likes of Shannon Elizabeth, Alyson Hannigan, John Cho, Tara Ried, and Mena Suvari all got a career boost, while pros Eugene Levy and Jennifer Coolidge add some authenticity to the movie.

American Pie was such as success that it spawned not one, but three official sequels further exploring the gang’s adventures after high school. While American Pie 2, American Wedding, and American Reunion aren’t on the same level as the original, they are still entertaining movies worth a watch. The same can’t be said for the direct-to-DVD spin-off series known as American Pie Presents. These five movies are pale imitations that should have never been made.

While you can never beat the original, studios wanted a piece of the pie so to speak and a slew of American Pie rip-offs came out in the years following. While most aren’t worth mentioning, several of these teen movies turned out great and helped give the high school movie genre a new lease of life.

So get your friends together, grab some beers, and whack on any of these movies and remember what it was like when you were in high school. 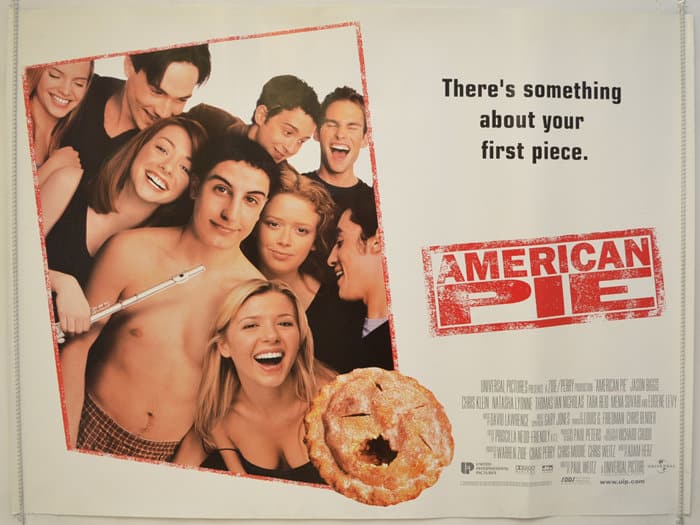 This coming-of-age comedy about two high school friends who want to lose their virginity before school ends takes the blueprint of American Pie and updates it for modern times. Jonah Hill and Michael Cera are best friends who are invited to a party where they both aim to get laid. Tagging along is the scene-stealing Christopher Mintz-Plasse as their nerdy friend McLovin.

Written by Seth Rogen and Evan Goldberg, directed by Greg Mottola, and produced by Judd Apatow, there is no way this film could fail. It’s another of those movies with a stacked cast who would all go on to go great things and has just the right emotional pull to balance out the dick jokes. A monster hit when released, Superbad is still recognized as one of the great teen comedies of the 00s.

Let’s take things back to when the teen comedy was first all the rage. 1982s Fast Times at Ridgemont High is a classic of the highest order. The debut screenplay of journalist turned movie director Cameron Crowe, this movie follows the lives of a group of high schoolers over one year. While best known for that scene of Phoebe Cates getting out of the pool and Sean Penn’s portrayal of stoner Spicoli, there is much more to this much-loved movie.

Selected for preservation in the United States National Film Registry by the Library of Congress in 2005, Fast Times at Ridgemount High captures what life is like as a teen and the trials and tribulations that come with it. The smart screenplay is brought to life wonderfully by director Amy Heckerling with a weird and wonderful cast of characters featuring the likes of Jennifer Jason Leigh, Judge Reinhold, Forest Whitaker, Eric Stoltz, and Nic Cage. A true classic that still holds up today.

As internet dating started to become a thing in the early 00s, Hollywood took notice with a string of sex-related comedies. Sex Drive is one of the better movies from that era. After meeting Ms. Tasty online, 18-year-old graduate Ian Lafferty (Josh Zuckerman) heads off on a road trip with his best mates Felicia Alpine (Amanda Crew) and Lance Nesbitt (Clark Duke) to meet her in Knoxville.

Hilarity ensues as the trio bunk down with the Amish, get tangled up with a hitchhiker, and contend with a psychotic boyfriend. There are lots of laughs and plenty of eye candy in this comedy romp that also has a banging soundtrack with music from the likes of MGMT, Fall Out Boy, and AC/DC.

After a smaller role in Superbad, Emma Stone got cast as the leading actress in the 2010 comedy Easy A. Stone plays Olive Penderghast, a high school student who lies about losing her virginity. As rumors spread and Penderghast is slut shamed, she decides to embrace her new reputation. She begins wearing more revealing clothes and starts a business where she says she has sex with boys in exchange for gifts.

Of course, things start to go wrong as the harassment ramps up and Penderghast realizes she might need to set things straight. While full of laughs, there are some important themes about sex, respect, and boundaries that elevates Easy A above your standard high school comedy.

Taking things outside of the United States, EuroTrip is another hilarious sex comedy with some classic scenes that will have you giggling. Scott Mechlowicz is an American student who sets off on a journey across Europe to find his German pen pal Jessica Boehrs and declare his true feelings to her. Joined by his sex-obsessed friend Jacob Pitts, the duo gets up to all sorts of funny antics on their quest to find Boehrs.

They bond with a group of football hooligans in London, get robbed in Amsterdam, and mistakenly reveal the Pope is dead while in Italy. This isn’t a “smart comedy,” but if you love silly visual gags and sex jokes, EuroTrip will be right up your alley.

Changing things up, Project X is a teen comedy shot like a found footage movie. It revolves around three best friends who throw a party to increase their popularity. Things get out of control when word of the party spreads throughout Pasadena and every man and his dog shows up at the party.

Shot on a $12 million budget, Project X went on to make a whopping $102.7 million. While critics took shots at the movie for its misogynistic characters and treatment of women (which is fair), audiences flocked to see the movie in droves.

A modern-day Animal House, the movie is chock full of laughs, and the unique way its filmed adds to the overall vibe. Throw in a hip-hop-heavy soundtrack and a memorable cameo from Miles Teller (playing himself), and you have yourself 88 minutes of non-stop good times.

Many forget Ryan Reynolds started his movie career with National Lampoon’s Van Wilder. While not his first film, it’s the one that got him noticed and helped the Canadian break into the mainstream. Reynolds plays the title character Van Wilder, a college slacker who is happy to keep changing majors so he can live the party life. When an article about his lifestyle comes to the attention of his father, his tuition is cut and Wilder must get his act together and graduate before he finds himself out on his ass.

Wilder gets help from a rag-tag bunch of students (including Kal Penn, who would go on to star in the sequel) as he tries to impress his love interest Gwen Pearson (Tara Reid) while dealing with her dodgy boyfriend Dick Bagg (Daniel Cosgrove), who is intent on seeing Wilder fail.

Van Wilder is a great showcase of Reynolds’ charm and comic timing and a good example of Reid’s acting abilities. The addition of Paul Gleason, replicating his role as Vice Principal Richard Vernon from The Breakfast Club, is a nice bonus too.

We’ve had a Euro trip, so why not a road trip? Hitting cinemas a year after American Pie, this sex comedy kick-started director Todd Phillips and actor DJ Qualls’ careers. After Breckin Meyer accidentally sends a sex tape starring himself and Amy Smart to his girlfriend in Austin, he sets off to intercept the tape before it reaches her.

Joined by friends Sean Williams Scott (basically playing Stifler again), Paulo Costanzo, and DJ Qualls, the foursome get up to all sorts of trouble on their journey to Austin. Road Trip has some memorable cameos from Tom Green, Fred Ward, Andy Dick, and Jimmy Kimmel and laid the groundwork for Phillips’ brand of comedy he would perfect with The Hangover. A great double bill with EuroTrip.

The influx of teen comedies meant the genre was ripe for the picking. Not Another Teen Movie is a parody of the genre that’s actually really funny. Based on the plot of She’s All That – a movie about a jock who is dared to turn a random girl into the Prom queen – the movie also takes the piss out of movies such as American Pie, Road Trip, Cruel Intentions, Bring It On, and 10 Things I Hate About You.

While critics didn’t think much of it, Not Another Teen Movie is one of those films that connected with audiences. It’s also notable for featuring a raft of up-and-coming talent, such as Chris Evans, Jamie Pressly, Eric Christian Olsen, and Samm Levine to name a few. Sure, it didn’t win any awards, but there are enough laughs to keep you amused.

This movie actually hit cinemas a year before American Pie but shares many of the same themes. It’s a teen comedy about a group of students at a graduation party and the shenanigans they get up. Just like in real life, the evening is full of drama and multiple storylines. There’s the loner who is preparing to tell the hot girl he loves her. The nerd looking for revenge against the jock who made his school life hell. And of course, the virgin who is determined to get laid.

While it didn’t fare critically well, fans of teen comedies have a soft spot for Can’t Hardly Wait. There are some funny moments and the cast is a who’s who of actors and actresses before they hit the big time. Jennifer Love Hewitt, Ethan Embry, Jamie Pressly, Jason Segel, Selma Blair, Seth Green, Donald Faison, and Lauren Ambrose are just some of the future stars who make up the ensemble cast.

Fun fact: the movie is named after The Replacements’ song that plays during the end credits.

Another Todd Philips movie, this one is about three men in their 30s trying to relive their youth. The trio of Luke Wilson, Vince Vaughn, and Will Ferrell turn Wilson’s home into a fraternity to stop him from getting kicked out. There’s a bit more to the plot, but all you really need to know is Old School is a hilarious comedy with Vaughn and Ferrell approaching their prime.

Ferrell’s turn as Frank the Tank (“You’re my boy blue!”) is one for the ages and no doubt helped cement the actor as one of the best comedy performers in the business in the early 00s. The script is funny, the cast in great form, and the laughs endless, making this movie worth a spot on this list.

One of the more recent teen comedies is this great entry from Pitch Perfect creator Kay Cannon. The film is about a trio of parents who try and stop their daughters from losing their virginity on Prom night. The parents trail their daughters throughout the night and end up getting into all sorts of trouble while trying to stay hidden from their kids.

The parents are played by Leslie Mann, John Cena, and Ike Barinholtz, with Cena easily the standout. Proving his comedic turn in Trainwreck was no fluke, every minute Cena and his cargo shorts are on the screen will have you belly laughing. At times crude, this is balanced by the emotional connection between the parents and their daughters, making Blockers a heartwarming comedy about losing your virginity.