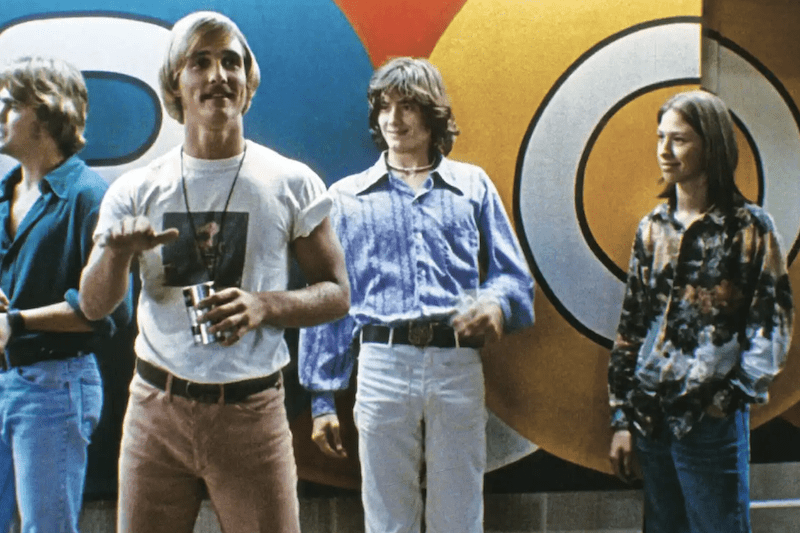 Director Richard Linklater’s classic 1993 flick Dazed and Confused is one of the great coming-of-age movies. Set in 1976 on the final day of high school, the film focuses on a group of students and the trouble they get up to. Smoking dope, underage drinking, keg parties, and a smattering of violence all feature as different groups of students (nerds, jocks, druggies, etc.) are highlighted throughout the movie’s 102-minute run time.

Movies like Dazed and Confused just don’t exist these days, and you’ll be hard-pressed to find a better coming-of-age story. Not only is the plot simple but relatable and sure to bring up feelings of nostalgia, but the soundtrack is killer. It contains a slew of hit 70s rock tunes from the likes of Alice Cooper, Foghat, ZZ Top, Kiss, and Black Sabbath. Special mention must also be made of the ensemble cast comprising up-and-coming Hollywood stars at that time. Ben Affleck, Milla Jovovich, Jason London, Parker Posey, Adam Goldberg, Joey Lauren Adams, Matthew McConaughey, and Cole Hauser all appear at some point throughout the movie.

It’s hard to find movies that match the quality of Dazed and Confused, but if you’re wishing to watch a high school drama or coming-of-age movie with a great cast, here is a selection of similar films we think you will enjoy. 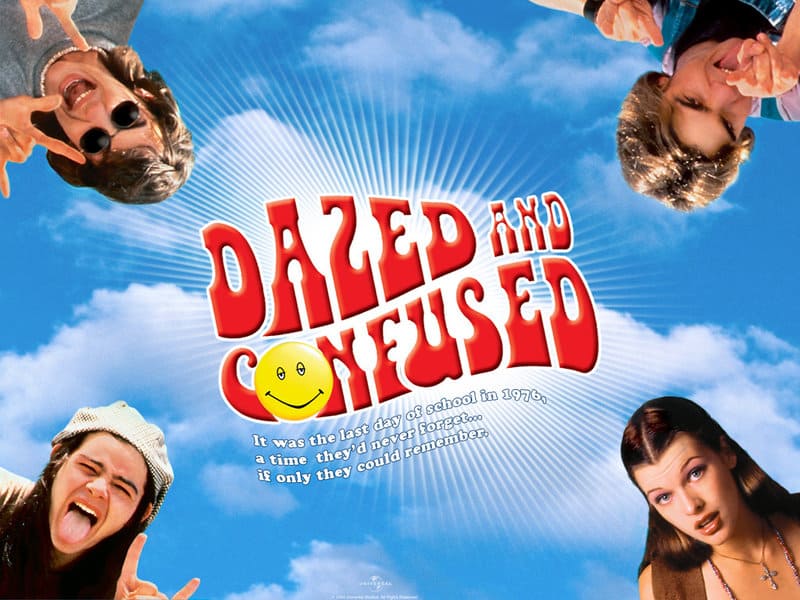 Taking place at the fictional Ridgemont High School, this hilarious 80s movie is very similar to Dazed and Confused. It’s set in the 70s (1979 to be exact) and centers around a group of students dealing with sex, relationships, unwanted pregnancy, and other teen issues.

Based on Cameron Crowe’s 1981 book Fast Times at Ridgemont High: A True Story, this movie is full of iconic moments with a real emotional pull that will have you invested in the characters. The pool scene with Phoebe Cates is also a fan favorite.

Before Star Wars: A New Hope transformed George Lucas into a movie mogul, he turned out this 1973 gem. Following up his dystopian debut, THX 1138, American Graffiti is a very different movie about a group of teenagers enjoying one last summer night before reaching adulthood.

Inspired by Lucas’ own upbringing in 1960s Modesto, California, America Graffiti’s key story revolves around three friends and the misadventures they get up to over the course of one night. Drinking, drag racing, and young love all make up the plot, with a cast full of unknowns who would go on to become big stars, including Harrison Ford, Richard Dreyfuss, and Ron Howard.

If you’ve ever wondered what it’s like working in a record store, Empire Records has all the answers. Set in an independent record store, this coming-of-age favorite highlights the lives of five employees of the store during one day as they try and stop the store from being sold to a bigger retailer.

Although a massive box office bomb that was also critically panned, Empire Records found a cult audience on DVD thanks to its mix of comedy and drama and an impressive cast that includes Liv Tyler, Anthony LaPaglia, Debi Mazar, Maxwell Caulfield, Rory Cochrane, Robin Tunney, and Renée Zellweger. As you would expect from a movie set in a record store, the soundtrack hits all the right notes, helping make Empire Records an enjoyable watch.

Jack Black pretends to be a substitute teacher to recruit a band to help him win the local “Battle of the Bands” competition in this outrageous comedy. A surprise hit (the movie made $131 million at the box office), School of Rock is the right type of vehicle for Black, who gets the chance to flex his musical talents while showcasing his comedic timing.

The cast of young kids playing the school students are all fantastic, with a few of them (Miranda Cosgrove and Adam Pascal to pick two) even going on to have successful film careers. Once again, this is a film with a banging soundtrack featuring the likes of “Immigrant Song” by Led Zeppelin, “Edge of Seventeen” by Stevie Nicks, and “Substitute” by The Who.

Kevin Smith is a hack. If you need proof, just check out Clerks III. But before he ruined whatever legacy he might have, he did make a couple of decent flicks. One of them is Mallrats.

Considered a cult classic, the plot concerns two misfits dumped by their girlfriends who head to the local mall to find comfort. Once there they find themselves getting into all sorts of trouble as they interact with a broad range of characters and talk about love, sex, and romance while trying to win back their better halves.

As is a constant with early Smith films, the dialogue is top notch while the appearance of Jay and Silent Bob is always welcome. There’s a lot to like about Mallrats, and it’s just a pity that with each successive film Smith has gotten further away from his true aesthetic.

What more can you say about The Breakfast Club that hasn’t already been said? John Hughes’ seminal 80s hit about a group of high school students from all walks of life who bond during detention is everything you want from a film. It ticks all the boxes (script, direction, acting, soundtrack, cinematography, etc.) and offers a viewing experience that will have you laughing one minute and crying the next.

The movie’s legacy is far-reaching. It’s responsible for a slew of similar hit flicks and also for creating a new blueprint for the high school coming-of-age drama. The Breakfast Club is such a cultural landmark that got selected for preservation in the United States National Film Registry by the Library of Congress.

Although Almost Famous is about a fledging rock band in the 70s and a young writer trying to get a story about them, it still has that carefree vibe of Dazed and Confused with a cast to match. Based on director Cameron Crowe’s own journey as a reporter for Rolling Stone, Almost Famous stars Patrick Fugit as William Miller, a young journalist who goes on tour with the fictional band Stillwater (based on Poco, The Allman Brothers Band, Led Zeppelin, Eagles, and Lynyrd Skynyrd) who are on the verge of breaking up.

There’s a romance to the way the story is told, with Almost Famous focusing not only on what bands of that era were like but also the people who gravitated towards them, such as groupies like Penny Lane (an incredible Kate Hudson). Billy Crudup and Jason Lee must also be singled out for their roles as Stillwater’s feuding bandmates.

One of the standout comedies of the past two decades, Superbad is a hilarious movie about two best friends trying to get laid at their graduation after-party. Michael Cera and Jonah Hill are well-cast as buddies Evan and Seth (named after screenwriters Evan Goldberg and Seth Rogen) who find themselves getting into all sorts of trouble on their quest to lose their virginity.

With shades of American Pie and other teen movies, Superbad rises above thanks to its witty script and great performances from Cera, Hill, and an up-and-coming Emma Stone. Special mention must also be made of Christoper Mintz-Plasse’s scene-stealing cameo as the duo’s nerdy friend McLovin.

Ferris Bueller’s Day Off turned Matthew Broderick into a star and Yello’s “Oh Yeah” into a surprise hit. John Hughes’ love letter to Chicagobis about three students who skip school and mess about in the city while learning more about each other than they ever imagined. As well as highlighting plenty of famous Chicago landmarks, Ferris Bueller’s Day Off features some interesting ideas, especially with characters breaking the fourth wall to address the audience.

The movie has more memorable scenes than you can poke a stick at and the three leads (Broderick, Mia Sara, and Alan Ruck) all put in career-defining performances. A wonderful 80s comedy the whole family can enjoy.

Seen as a spiritual successor to Dazed and Confused, this overlooked 2017 flick from Richard Linklater is very much in the same mold. Although set in the 80s and featuring an entirely different cast, Everybody Wants Some!! has the same feel as Linklater’s early high school hit.

Once again set in Texas, but this time at a college, Everybody Wants Some!! takes place over several days as a group of students navigates the start of a new school year. It’s another heartfelt coming-of-age story with plenty of laughs and a cast that includes Glen Powell, Ryan Guzman, and Wyatt Russell. It might not hit the heights of Dazed and Confused, but this movie still offers plenty with a solid soundtrack to boot.

The second Richard Linklater movie to appear, this one is an adaptation of Eric Bogosian’s play of the same name. Not much happens but everything happens as a group of young adults spends an evening hanging out in front of a convenience store. Discussing all of life’s problems and their hopes and dreams, you’re left wondering if the four slackers are going to make it in the real world.

Although not up there with Linklater’s best, SubUrbia still asks a lot of questions about the pressures placed upon young adults and the uncertain future that lies ahead for them. Parker Posey, Giovanni Ribisi, and Steve Zahn all feature.

With the Brendan Fraser renaissance in full swing, there’s no better time to delve into his early work, such as this great coming-of-age drama School Ties. Fraser is a young Jewish kid who scores an athletic scholarship to a prestigious prep school. Afraid his religious beliefs will get him bullied, Fraser tries to hide his faith from his fellow classmates, including Matt Damon, Chris O’Donnell, and Ben Affleck. But when the truth about him comes to light, Fraser becomes a target and struggles to get through the school year.

This is a tight drama with a script written by Law & Order creator Dick Wolf that deals with some heavy issues. All the cast is great, in particular Damon, who should play horrible characters more often.