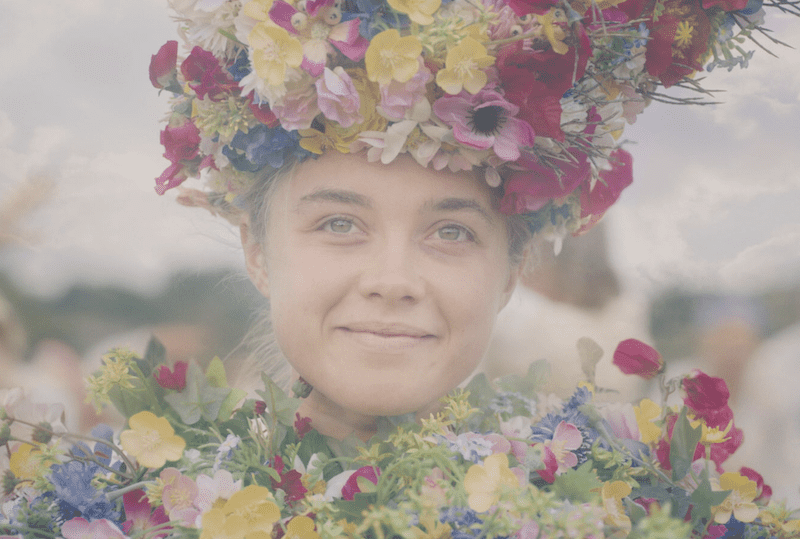 Midsommar is up there when it comes to modern horror movie classics. While there are many similar movies like Midsommar on the big streaming services, nothing beats the scares and tension that occur during Ari Aster’s sophomore effort. The follow-up to his equally chilling Hereditary, this movie is about a group of friends who attended a midsummer festival in Scandinavia. What starts off as a joyous occasion descends into madness as the group discovers the festival is being held by a sinister pagan cult who are looking for their next victims to sacrifice.

To say any more will spoil this incredible film, but just know that Midsommar is a masterclass in fear and suspense. It’s beautifully shot and the gradual realization of what is happening to the characters is a real mind fuck. The cast is also fantastic, with the core of this horror focusing on the breakdown of the relationship between Florence Pugh and Jack Reynor as their world is turned upside by the cult.

Inspired by a heartbreaking break-up Aster went through, Midsommar asks big questions about trauma and grief and how we deal with it. It’s a smart horror that’s more than just jump scares and shocking violence. It’s a film that is part of a new era of horror movies that are not only frightening but also thought-provoking.

If you’re looking for more horror movies in a similar vein, you’ve come to the right place. Whether you’re after high concepts, shocking violence, or smartly written plots, we’ve got you covered with this list of 12 chilling horror movies like Midsommar. 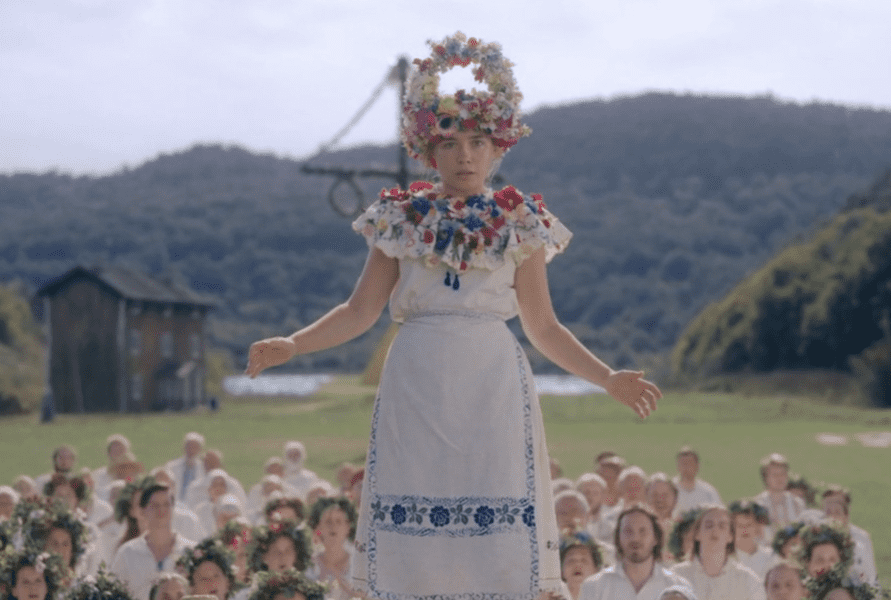 Ari Aster’s debut film is the stuff of nightmares. Similar to Midsommar, Hereditary deals with themes of trauma and family along with a mysterious cult playing a major role in the plot. Aussie actress Toni Collette stars as Anne, whose mother dies at the beginning of the film. Struggling with grief, a second tragedy occurs that sends her down a spiral of depression and the discovery of a demon named Paimon who might be behind the events of the film.

Anne must race against time to stop the demon from impacting the rest of her family, with her husband Steve (Gabriel Byrne) and son Peter (an incredible Alex Wolff) most at risk. Hereditary is a horror movie masquerading as a family drama with a chilling ending that will leave you shook.

Robert Eggers is another director making his mark in the horror genre. His debut film, The Witch, is a creepy story about a family taunted by a witch in the 1630s. He followed it up with the black and white masterpiece The Lighthouse. Willem Dafoe and Robert Pattinson star as 19th-century light housekeepers who slowly go mad when they get trapped on the island due to a storm.

The Lighthouse is a slow burn that really ramps up in the final third as Dafoe and Pattinson go bonkers. As is the case with Eggers’ films, there are a lot of different themes running through the plot and many ways the story can be interpreted. One thing everyone can agree on is Eggers has a particular style and is always willing to challenge his audience about what they are watching.

Best known as a comedian, Jordan Peele has done a complete 180 and transformed into one of the leading horror directors of recent years. Get Out is his debut and a film widely praised by critics and horror fans. It’s not your standard slasher or monster movie, but an intelligent psychological thriller dealing with the issue of race.

Daniel Kaluuya is a young black man meeting the parents of his rich white girlfriend Allison Williams for the first time. When her parents make some strange remarks about black people and the African-American help act odd, Kaluuya starts to think something is a little off. He quickly finds himself outnumbered and fighting for his life as the family shows their true colors.

Mia Farrow and John Cassavetes are a happily married couple who move into the Bramford, an apartment building with a shady past. Getting friendly with their elderly neighbors, strange things start to happen and Farrow finds herself pregnant. She believes she is carrying Satan’s child and believes everyone else, including her husband Cassavetes, knows what is happening.

Based on a novel by Ira Levin and directed by Roman Polanski, Rosemary’s Baby is widely regarded as one of the great horrors. It won many awards, with Ruth Gordon – who played the nosey neighbor dabbling in the dark arts – winning both a Golden Globe and an Academy Award for Best Supporting Actress.

You can never claim Darren Aronofsky doesn’t make interesting films. mother! is another mind-bending movie from the man behind Requiem for a Dream, Black Swan, and The Wrestler. This one stars Jennifer Lawrence and Javier Bardem as a married couple who allow several strangers to stay in their home. A lot of weird stuff starts to occur as references to the Bible and themes about the destruction of the earth and religious passages rear their head.

Lawrence is at her best, despite the sometimes muddled script. While critics remained mixed on mother!, it’s a fantastic modern horror with a bit of everything to please all types of moviegoers.

A huge influence on Midsommer is British folk horror The Wicker Man. Inspired by David Pinner’s 1967 novel Ritual and directed by Robin Hardy, the movie follows Police Sergeant Neil Howie who visits an isolated Scottish island in search of a missing girl.

What he encounters is a community of Pagan worshippers, with his Christian beliefs tested as the locals try and derail his investigation. It doesn’t take long for the cult to turn on Howie while an encounter with Lord Summerisle (Christopher Lee) reveals his role in the festivities and spurs Howie to escape the island.

The 70s was a great time for horror movies and The Wicker Man is a testament to that. Even today, almost five decades later, the movie still feels fresh, with the firey ending just as impactful now as it once was.

Word of warning; stay away from the 2006 Nicholas Cage remake unless you are after some laughs.

See more about - The 10 Best Monster Movies Of All Time

Few indie flicks have been as successful as The Blair Witch Project. Made on a budget of between $200,000 – $500,000, the film made an eye-watering $248.6 million at the box office, shattering many records and setting the groundwork for found footage movies.

The plot revolves around three teenagers investigating the Blair Witch, a local legend of Burkittsville, Maryland. She is believed to be responsible for the murders of dozens of people over the centuries. As they explore deeper into the woods they soon find themselves lost and under attack from some unseen force. When one of the group goes missing, the two left are forced to enter the Blair Witch’s house to find him.

The Blair Witch Project has everything you want from a horror: plenty of jump scares, an intriguing storyline, and an evil witch who you never quite see until the terrifying final moments.

One of the more unsettling films on this list is The Killing of a Sacred Deer. Coming from the brilliant mind of Greek director and writer Yorgos Lanthimos, this movie stars Colin Farrell as a cardiac surgeon who befriends a teenage boy (Barry Keoghan). Keoghan eventually moves into Farrell’s home and that’s things start to go south, with Farrell’s family getting sick and Keoghan revealing his true intentions.

This psychological horror doesn’t rely on jump scares or loads of gore. It’s all about the atmosphere and the tension that builds between the leads. Both the bearded Farrell and innocent-looking Keoghan are in top form while supporting actress Nicole Kidman is really great after a less than stellar decade.

Gore Verbinski has a very interesting filmography. While he’s only made 11 films in just under three decades, these include three Pirates of the Caribbean movies, Academy Award-winning animation Rango, and the American remake of The Ring. Going back to his horror roots, A Cure for Wellness is a creepy psychological thriller set in a wellness retreat.

When high-flying executive Lockhart is sent to pick up a fellow employee by his boss at a wellness retreat, he ends up being cared for there himself after a car accident. As he begins his rehabilitation under the eyes of Dr. Heinreich Volmer (Jason Isaacs), he suspects something isn’t right and tries to find out what is going on with the help of another patient, Hannah von Reichmerl (Mia Goth).

Although it underperformed at the box office, A Cure for Wellness is well worth your time thanks to Verbinski’s visually arresting style and the twist-filled script.

Forget the remakes, reboots, and poor sequels, the original Halloween is still the best movie in the franchise. While it’s got nothing to do with cults and there aren’t any deep themes embedded in the plot, Halloween is in the top five greatest horror movies of all time. So if you like Midsommare because of the horror, then you’ll be all about this movie. It’s a simple premise too: a masked killer returns to the scene of his first crime and stalks a group of young teens.

John Carpenter’s first movie laid the foundation for slasher movies, with Michael Myers the archetypal killer with just one thing on his mind: murder. Jamie Lee Curtis is a presence as the original scream queen, with Carpenter’s haunting synth soundtrack creating tension and suspense. A true horror classic.

This film shares many similarities with Midsommar. A group of friends head into the Scandinavian countryside and find themselves in the midst of some sort of ritual sacrifice. The foursome plan on going hiking six months after a tragedy resulted in the death of their close friend. They soon encounter strange going-ons in the forest and find themselves being stalked by a monster before taking refuge in a mysterious village. Then things really get wild.

The Ritual is very much in the vein of The Witch and A Classic Horror Story. It’s an atmospheric and scary movie with a storyline concerning cults and things that go bump in the night.

This creepy Austrian horror concerns nine-year-old identical twins Elias and Lukas and their mother. After undergoing cosmetic facial surgery, the twin’s mom returns home with her face wrapped in bandages. When she starts exhibiting strange behavior, the siblings wonder if the person under the bandages is really their mom.

This horror film is another great idea executed superbly by directors Veronika Franz and Severin Fiala, who are well regarded in their home nation. While the subtitles might put some people off, don’t let that stop you from watching Goodnight Mommy. It’s a great little horror that will have you wondering who is really behind the bandages.