This explosive exposé can bolster a man’s political finesse for fine cocktail discussions. Partnoy demystifies the shady economic practices that have defined America. The illuminating information contained within this immersive read is fundamentally shocking. 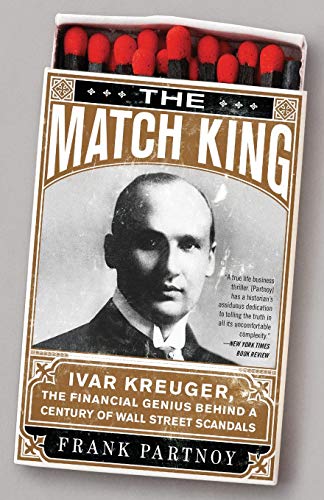 The Match King Book written by Frank Partnoy hynotically alludes to a pattern of catastrophic racketeering that is engineered to bloat corporate profits. The author supplies an incisively knowledgeable tone that accessibly encompasses the comprehensiveness of Wall Street’s manipulative behaviors. Every word grips the reader as the analysis provides a linear perspective on the formation of the country’s monopolistic mentality. As the writer reveals the most alluring secrets of Ivar Kreuger, and every Ponzi scheme thatstems back to the practises of a single enterprise in the 1920s.

One man single-handedly forged the path for the formation of modern banking systems. The volatile spectacle of worldwide economics can be traced to Ivar Kreuger. He was a corrupt entrepreneur of the elite variety; his basic maneuvering consisted of trading American fortunes to Europe during the Great Depression. Although this despicable mastermind committed suicide in 1932, presumably to avoid being held accountable for fraud and forgery, his underhanded accounting strategies have become a pinnacle of contemporary finances.

Before this captivating book was released, his massive influence was destined to be hidden in the annals of history. Now, the truth is out! This publication is definitely one that should not be missed.
Discover Greatness
Subscribe for Free
Real gentlemen know quality when they see it. 100% Privacy.