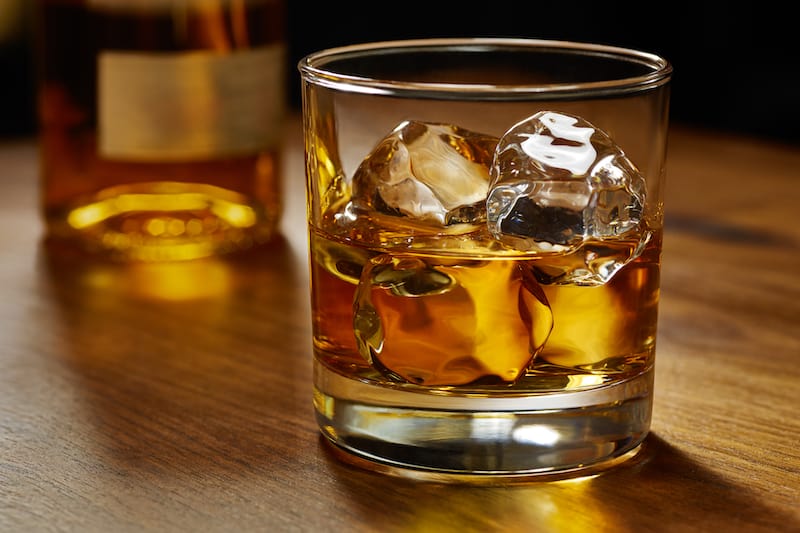 What Is the Most Expensive Bourbon in the World?

When it comes to traditional American spirits, it doesn’t get any more red, white, and blue than bourbon. While most people think of bourbon brands like Jack Daniels, Makers Mark, Woodford Reserve, and Wild Turkey usually spring to mind. These cheaper options are solid but pale in comparison to the most expensive bourbon bottles that are on the market. But before delivering into these pricey drops, here’s a little background on the distilling process.

The brown liquor is America’s take on whiskey that has to be made using a corn mash bill of at least 51%. It must be distilled at no higher than 160 proof and diluted to no higher than 125 proof. Bourbon is then generally stored in charred oak casks with no time limits on the aging process.

Its popularity has risen through the roof over the past decade, with more and more bourbon brands popping up across the States. While it doesn’t have to be produced in Kentucky, about 95% of it is. There is a bourbon out there for everyone, which got us thinking about the most expensive bourbon in the world.

Bourbon whiskey has been distilled in America since the 18th century. Over that time there have been a plethora of choices for the whiskey connoisseur to consume at all different price points. While most bottles are reasonably priced, there are some rare and expensive bourbons out there and that’s what we want to focus on.

These bottles of bourbon have been aged for many years to create distinct flavors that whiskey lovers will salivate over. As the demand for this tasty spirit continues to rise, so do consumer’s tastes, with more and more people looking for that rare bottle to add to their collection. So keep on reading to discover the most expensive bourbons in the world.

10 of the World’s Most Expensive Bourbons 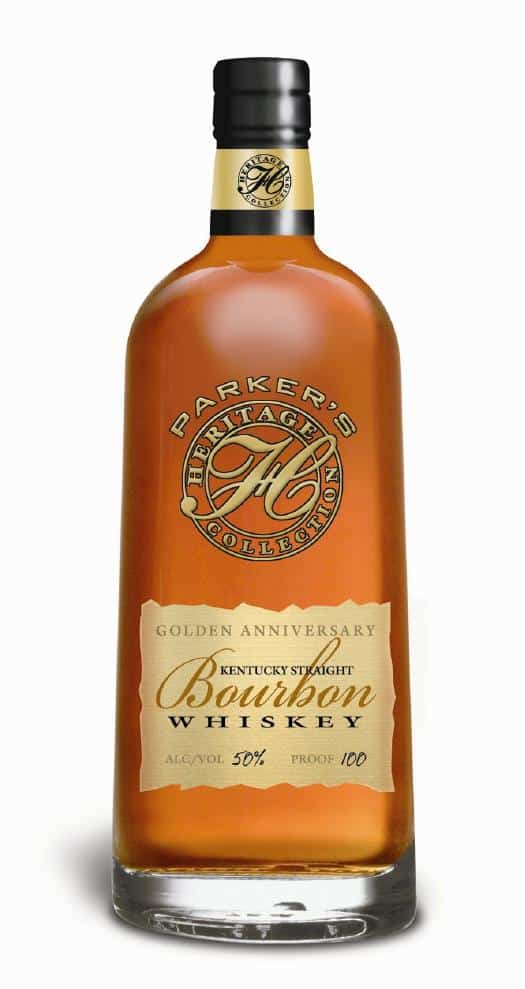 Parker’s Heritage Collection is a wonderful full-bodied whiskey from Heaven Hill that’s been released every year since 2007. It’s named after master distiller Parker Beam, the man responsible for Heaven Hill whiskey. While there have been some great drops over the years, including the fourth edition Wheated Bourbon and ninth edition Malt Whiskey, the one most desired is the Golden Anniversary third edition.

This rare bourbon is bottled at 50% ABV and features a blend of whiskies and marks a fitting tribute to Paker Beam, celebrating his 50-year career. This bourbon has a bit of everything, with the Whisky Advocate proclaiming in their review that the Golden Anniversary Bourbon is a complex but balanced whiskey with hints of “candied citrus, nectarine, blueberry, and sultana anchored by a nougat center, laced with honeyed vanilla and orange creamsicle. There’s a dusting of cocoa powder, brittle mint, and cinnamon, too. Tobacco leaves, polished leather, and teasing bourbon barrel char round out the palate, emerging more prominently towards a warming finish. A classic!” 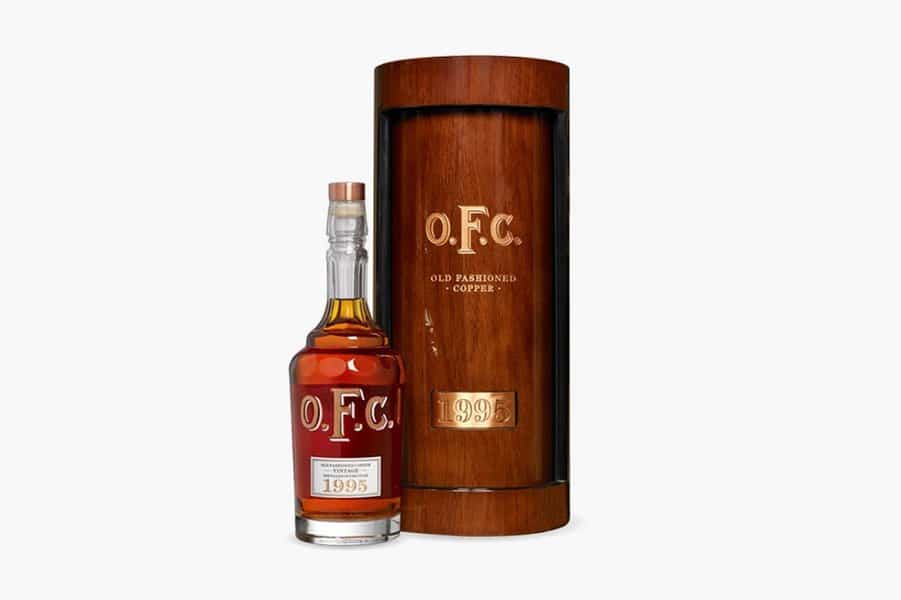 This rare 25-year-old bourbon pays homage to the original OFC distillery that first opened in 1870. It’s one of the most state-of-the-art distilleries of its time. It was the first to use copper fermentation vats, column stills, and a new steam heating system that is still used by Buffalo Trace today.

This edition of the bourbon is the fifth to have been released. Distilled in 1995 using oak barrels, this whiskey is limited to just 1,500 bottles. The sweet brown liquid with hints of cinnamon, leather, dark chocolate, and tobacco leaves comes in a crystal bottle with a hand-applied label in a collectors wooden box. It didn’t take long to sell out when first released and now sells online for just under $13,000. 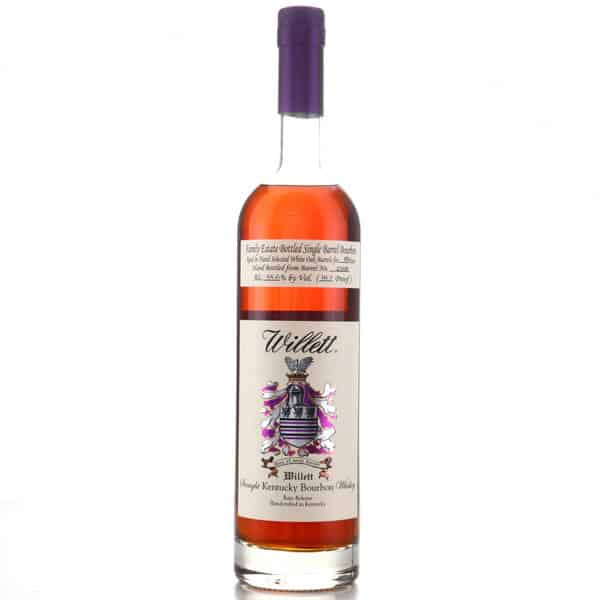 While there are other bourbons from Willett Family Estate that have been aged longer, the 16-Year-Old Straight Bourbon Whiskey is one of the most sought after by whiskey drinkers. Aged a glorious 16 years and bottled at 107 proof, this delicious whiskey is a powerful drop best served neat or with a splash of water.

Taken from the family’s Private Barrel Selection program, this whiskey is made in small quantities (usually no more than 100 bottles) and described by Willet as “an unfiltered, barrel proof, straight Bourbon Whiskey of unusual depth and complexity.” Not only is this a one-of-a-kind bourbon, but it has a price to match, with the average bottle selling for $16,660. Limited to just 250 bottles, The Last Drop 1980 Buffalo Trace Kentucky Straight Bourbon Whisky is a very special drop. It was distilled at George T Stagg Distillery, now better known as Buffalo Trace. The whiskey used for this bourbon was found hidden away in barrels that had been long forgotten about at the old Buffalo Trace distillery.

The 1980 bourbon was originally created by master distiller Gary Gayheart, whose apprentice, Harlan Wheatley, found the barrels and decided to turn them into what is now The Last Drop 1980. With an average price of around $22,247, this 90-proof bourbon is renowned for its aging process and flamboyant taste. 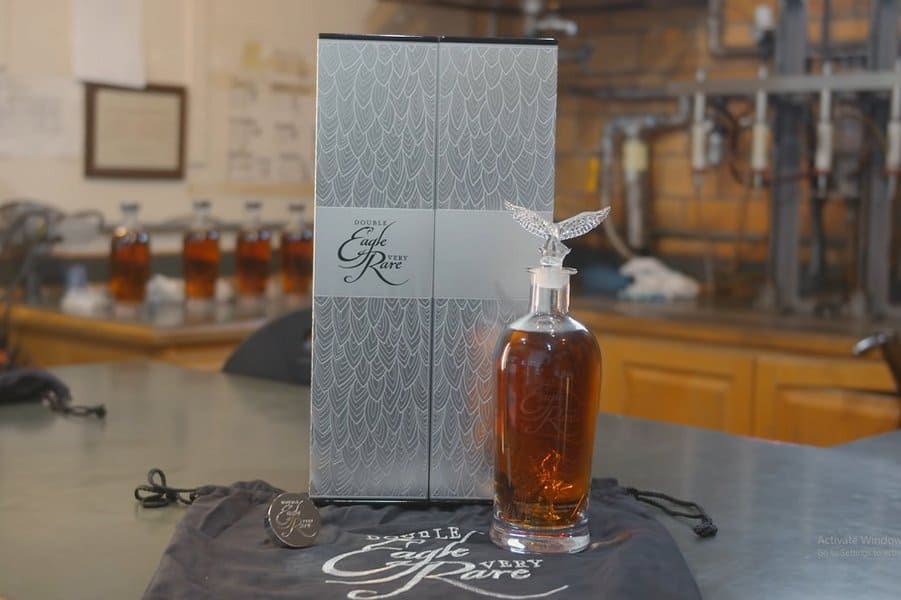 This is another fantastic bourbon that comes from the Buffalo Trace distillery. Maturing twice as long as Double Eagle’s standard 10-Year-Old Kentucky Straight Bourbon, the third edition of this limited bourbon whiskey is 101 proof that has “a nose of dark cherries and creamy caramel, on the palate, dark chocolate, smoked oak and dates, followed by a long, complex finish of cinnamon, anise, and oak.”

This bourbon from Double Eagle is bottled in a handmade crystal decanter that comes packaged in a silver box with sliding doors. Each bottle is also individually numbered, adding to the uniqueness of this whiskey and the $22,999 price tag.

See more about - The 15 Best Bourbons For Beginners Founded by John Shenk in 1753, Michter’s has an interesting history. While successful during its early years, Prohibition led to the closure of the distillery. While it did reopen, it passed through the hands of many different owners before shutting down again in 1989. That’s when Joseph J. Magliocco and Richard “Dick” Newman stepped in, turning Michter’s into one of America’s best bourbon producers.

The 25-Year-Old Single Barrel Bourbon Whiskey is one of the label’s best drops with a unique flavor. Considered a “unicorn” amongst whiskey aficionados, the spirit is aged for 25 years in American white oak barrels. 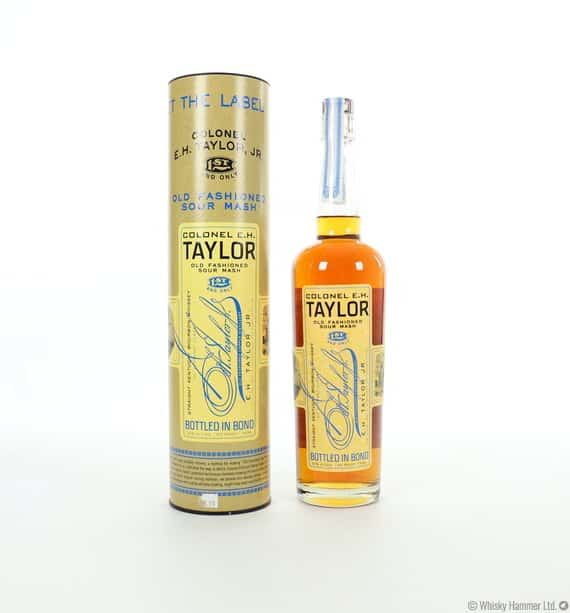 This small-batch bourbon whiskey uses an old recipe to recreate Edmund Hayes Taylor Jr.’s famous sour mash. It involves allowing the mash to sour naturally before the distillation process, creating its unique caramel flavor with hints of licorice and butterscotch. This bourbon was distilled in 2002 and bottled a decade later in 2012. It won a Gold Medal in the Fifty Best Bourbons competition of 2012, which along with its $28,999 price tag, makes it one of the most sought-after expensive bourbons on the planet. 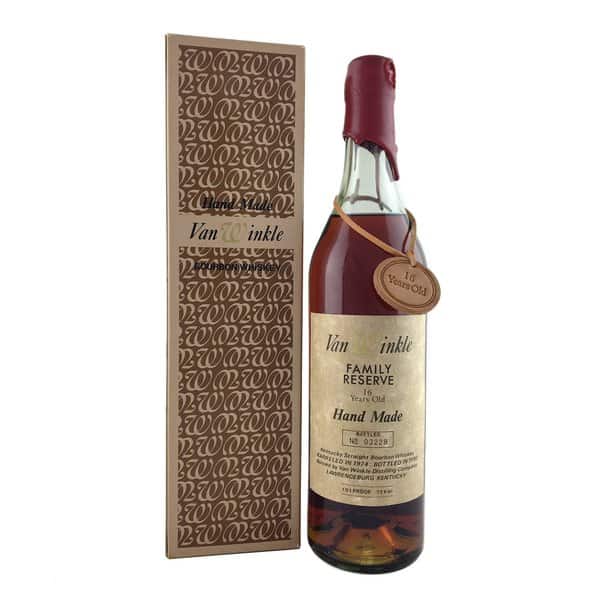 Just piping Colonel E.H. Taylor’s Old Fashioned Sour Mash is this beauty from the Van Winkle brand. Taken from the family reserve at the Boone Distillery, where it was distilled and barrelled in 1974, Julian Van Winkle III created many different batches over the years, with this being one of the rarest. It’s believed this bourbon was originally meant for the Japanese whisky market.

While the bourbon is still in production today, it is done so at a different distillery. This makes the limited number of the 1990 Van Winkle Family Reserve 16 Year bottled available extremely expensive, as they are some of the last bottles to contain bourbon distilled at Boon Distillery.

This was long before Van Winkle was bought out by Stitzel Weller Distillery, which was acquired by Buffalo Trace (now owned by Sazerac Company which controls much of the whiskey in America). That’s why the current price for a bottle of this tasty spirit is just under $30,000. Only 18 bottles of Redemption 36-Year-Old Barrel Proof Straight Bourbon Whiskey were produced, which is one of the main reasons it sits so high on this list with an estimated value of $41,999. It’s one of the oldest whiskeys ever distilled and is part of Redemption’s “Redemption Ancients” long of bourbons.

“The Ancients collection features whiskies laid down in barrels in 1978 and 1998 at the old Seagram’s distillery in Lawrenceburg Indiana, the same place where every drop of Redemption Whiskey has ever been produced,” said Tom Steffanci, President of Deutsch Family Wine & Spirits.

This particular bourbon is 109.9 proof and smells like dark chocolate and spices. On the palate, you can taste apple pie, maple, caramel, and pears. It comes in bottles that have been silk-screened with rye fronds. The metal labels are hand-painted while the cork contains a real 1978 U.S. penny to celebrate the year it was distilled. The most expensive bourbon on this list comes from Old Rip Van Winkle. This awe-inspiring bourbon whiskey is the oldest ever released by the distillery. Taken from 11 different casks, it spent 25 years maturing, beginning its journey in 1989 at the Stitzel-Weller distillery. It was then moved to Buffalo Trace Distillery in 2002 before being transferred into stainless steel tanks in 2014 to make sure it didn’t overage.

Not only is this bourbon one of the oldest, but when released in 2017 it came bottled in a homemade glass decanter. Only 710 of these were ever produced. Each bottle of bourbon comes in a wooden box made from the oak barrels that the spirit was aged in. It’s also accompanied by a certificate of authenticity signed and numbered by Julian Van Winkle, grandson of founder Julian P. Pappy Van Winkle, Sr.

Originally retailing for just $1,800, due to the limited amount of bottles produced, an unopened Old Rip Van Winkle 25-Year-Old can now fetch as much as $57,078 according to Wine-Searcher.

See more about - The Difference Between Bourbon And Whiskey