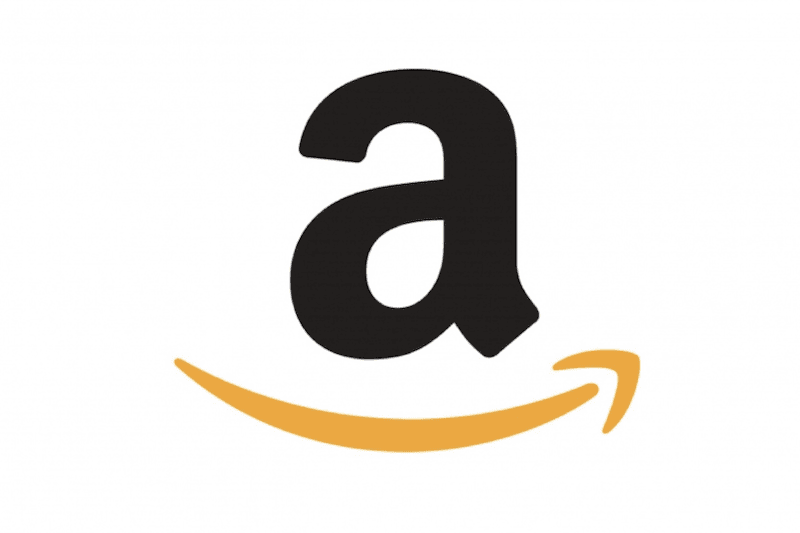 Millions of years ago, people were forced to leave their houses and go on long grueling journeys to the nearest store. Now, all it takes is a few simple clicks, and the item’s at your doorstep. Every day thousands of people log on to Amazon’s website to make purchases. Well, only half of them are buying stuff. The rest are writing funny Amazon reviews.

Indeed, these entertaining reviews are just as good as the quick delivery or Prime Day sales. A few Amazon reviews are helpful, but the majority are hilarious. People all over the world post some of the funniest reviews of products. In some cases, they post out of disappointment or anger. Other times, they post just to be a smart aleck. Of course, many people are sincere, but it’s still so funny. There’s nothing better than funny Amazon reviews.

According to this customer, Amazon’s glitter is excellent for arts, crafts, and getting revenge. This is one of the funniest Amazon reviews. First, reviewer Brian Spatz explains a part of the story that seems random. He has a roommate that often brings over strangers, including a homeless man. He had enough of the roommate’s antics and hatched a devious plan. He purchased Creative Arts Glitter on Amazon and went to the roommate’s bedroom. Next, he put glitter on all the roommate’s stuff. In this case, the customer gives the product a positive review and recommends it to anyone seeking revenge.

2. The Banna Slicer Saves a Marriage 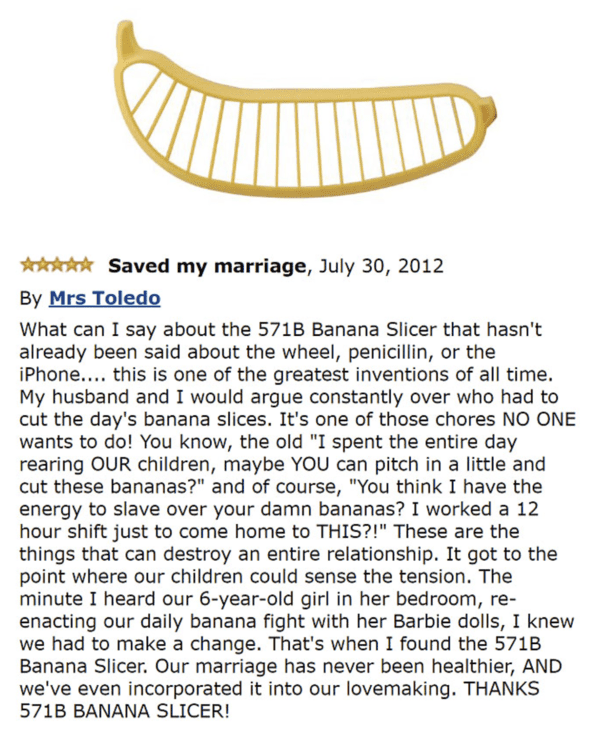 At one point, somebody in this world thought the Hutzler 571 Banana Slicer was a billion-dollar idea. Well, until they read those funny Amazon reviews. Most of the comments mock the pointless idea behind a banana slicer. Several customers didn’t realize there was a global problem of people struggling to slice bananas. In one review, Mrs. Toledo hilariously describes how the banana slicer saved her marriage. Before the slicer, she and her husband would spend countless hours arguing about who would slice the bananas. The relationship was almost over until the 571b Banana Slicer saved the day.

3. No Complaints From Grandpa 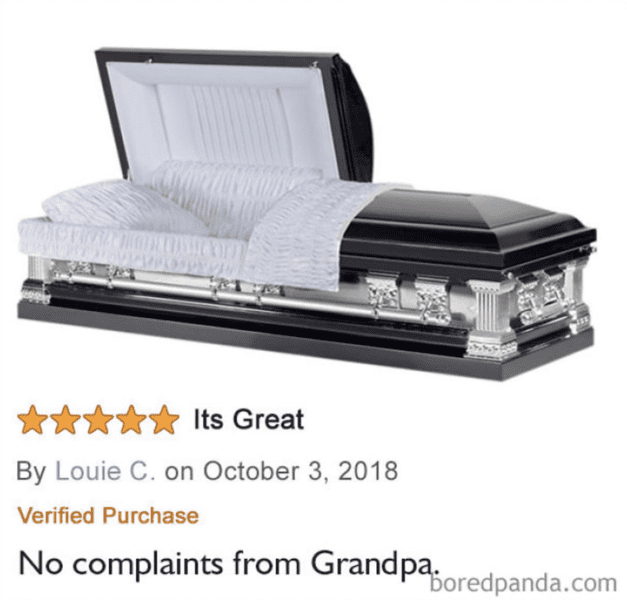 It’s tough to know if a product is worth buying on Amazon. One of the best ways to learn is to read the reviews. The quickest way is to read all the reviews with 5 stars. For instance, customers searching Amazon for a last-minute casket came across this helpful review. It’s simple and to the point. The funny Amazon review reveals that Louie C’s grandfather appears to love his new coffin. The best part, Amazon delivered it the next day.

4. Bic Cristal Pen For Her 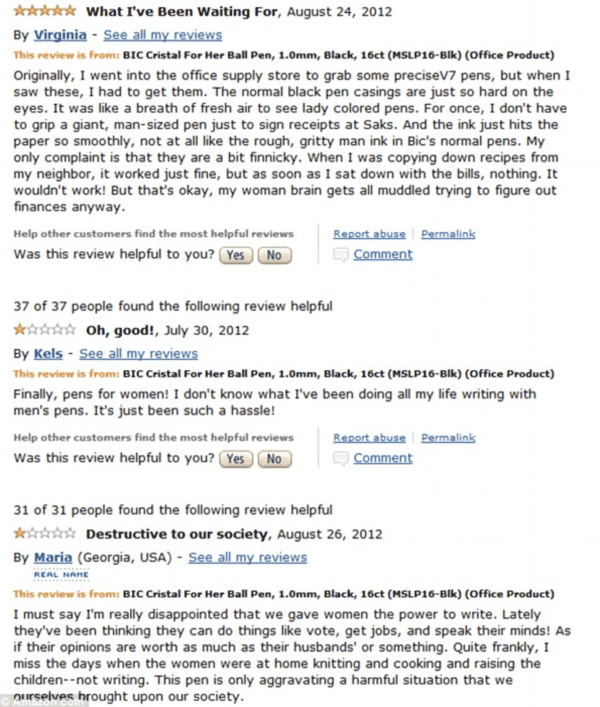 Amazon has all types of different products ranging from top-of-the-line to pointless. However, this particular product appeared to anger one Amazon reviewer. One customer found a Bic Cristal pen made for women. Apparently, the company somehow felt they weren’t tapping into their female market. In this funny Amazon review, a woman responds scathingly to the product. She sarcastically points out all the benefits, such as the feminine color, grip size, and being able to vent about gardening. It’s a hilarious Amazon review that should win an award.

Crafting with Cat Hair is a guide on using cat hair to make certain items, such as a finger puppet. There are actually a couple of positive reviews from people who love the book. However, there’s only one Amazon reviewer that should get their own sitcom. One person posted a sarcastic review praising the book. It’s a hilarious review that incorporates the classic cat lady joke. The reviewer appears to have put great effort into the post. To be fair, numerous customers bought it as a joke but ended up loving it. It’s safe to assume this Amazon reviewer wasn’t one of them. 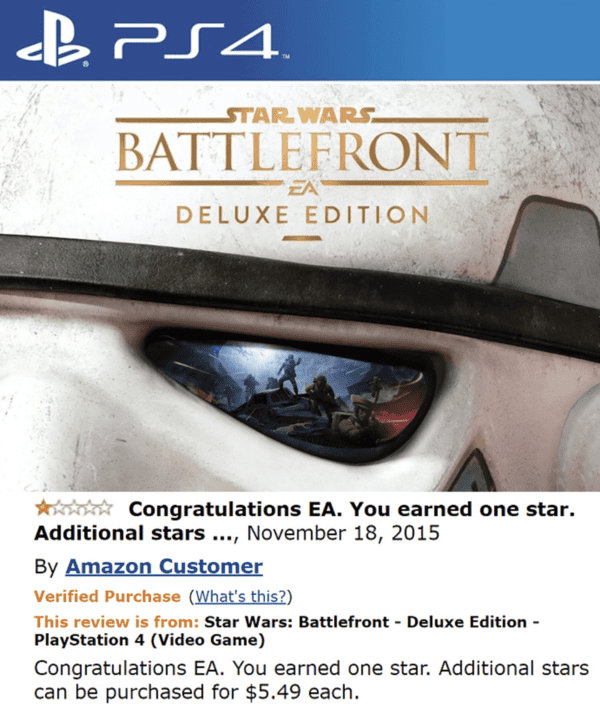 Classic video games often find ways to make the player spend more money. Of course, Star Wars Battlefront is no different. Here’s a clever Amazon review that manages to make a great point. The reviewer commented that he’s only giving the game one star. If the game wants more stars, they must pay an additional $5.49. It’s an amusing review, but the chances of Amazon paying for more stars are slim.

7. Where Are the Wolves in Wolf of Wall Street? 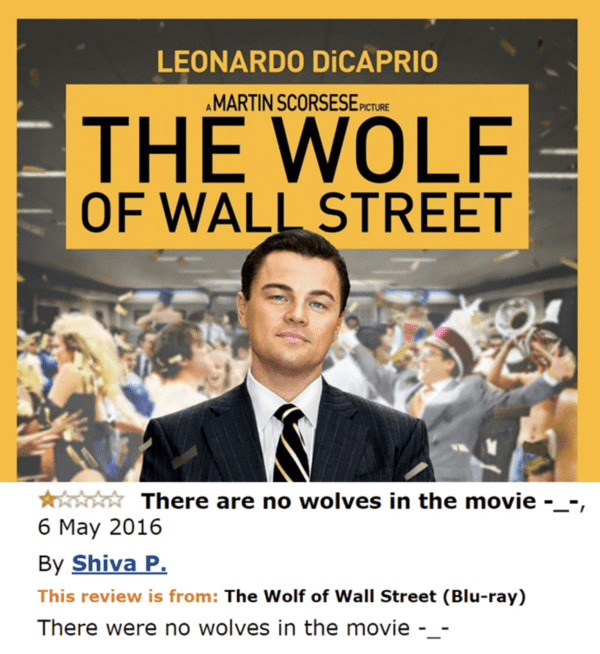 The critically acclaimed film The Wolf of Wall Street tells the true story of Jordan Belfort. Critics and fans gave the movie rave reviews. Well, it turns out the harshest film critics are on Amazon. For instance, this funny review didn’t like the movie at all. However, it wasn’t because of the acting, directing, or edgy content. They had one major criticism: no wolves in The Wolf of Wall Street. That’s a valid point. Perhaps this reviewer wanted to see a documentary about wolves living on Wall Street? 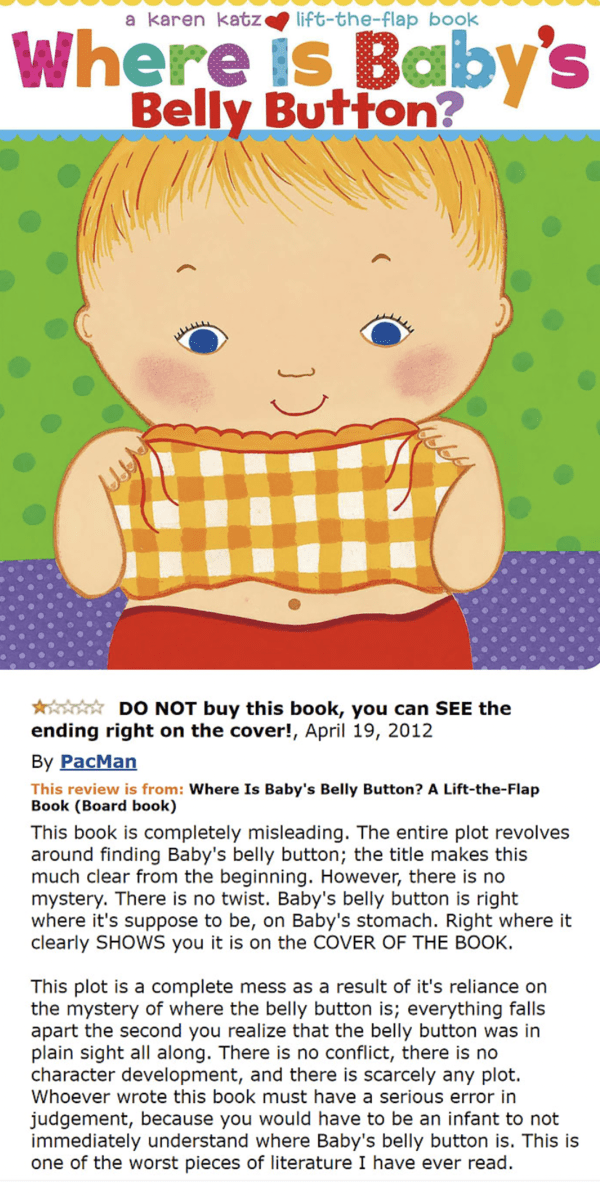 One thing that Amazon customers hate more than packages arriving late is misleading products. For instance, one reviewer felt the children’s book, Where Is Baby’s Belly Button? didn’t have enough of a mystery to the plot. They point out that the belly button is visible on the front cover, spoiling the ending. However, the reviewer notes the belly button is where it should be throughout the book. They were very disappointed with the lack of mystery.

Here’s another customer that gave a product 5 stars. Indeed, the product worked out better than they thought. In the funny review, the customer admits he purchased a Roku Streaming Stick for his mother-in-law. Since installing the streaming service, he hasn’t heard from her. He assumes she’s loving Roku or she died. Either way, he’s happy and gave it rave reviews.

Amazon users spend hours looking for the perfect items. That’s why the reviews are so critical. They help guide the customers in ways that retailer sites couldn’t. Here’s a great example. One Amazon reviewer’s wife got a pair of noise-canceling headphones. However, she hated the headphones and thought they only deserved one star. On the other hand, her husband put them on and loved that he couldn’t hear his wife talking anymore. He instantly gave it 5 stars. 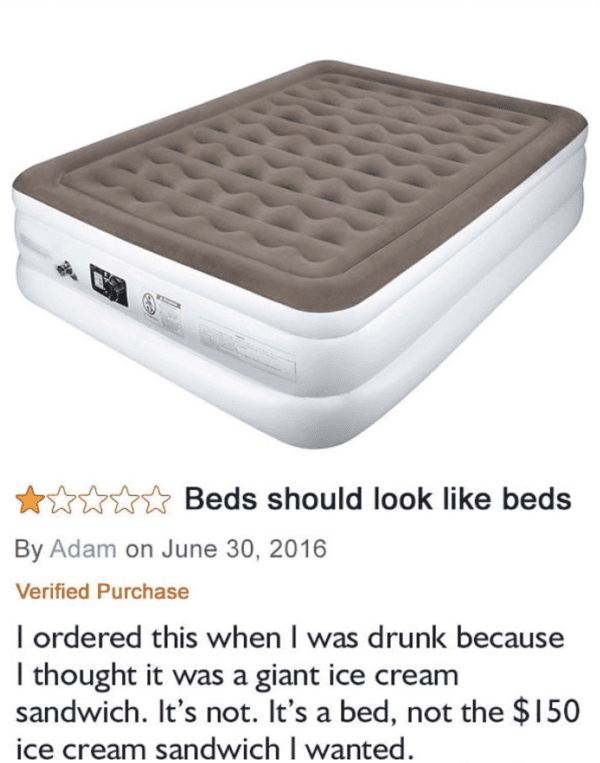 One of the dangers of Amazon is drinking and clicking. It often leads to regret and terrible purchases. For instance, this person stayed up late one night with a bottle of wine and suddenly craved an ice cream sandwich. In the middle of the night, the reviewer found the perfect sandwich, which only cost $150. Of course, it wasn’t an ice cream sandwich but a bed. This Amazon reviewer feels that beds should look like beds, not ice cream sandwiches.

Amazon has the solution for all of life’s problems. For instance, some people find it impossible to avoid ships. It’s a real problem for some people, apparently. Luckily, the book How to Avoid Ships has the answer. The book set off a wave of funny Amazon reviews. There are almost too many to count. However, one review stands out among the rest. The reviewer tells a long story about getting addicted to huge ships and struggling with it his whole life. He even hid his dirty secret from his family. Of course, he then discovered the book, and his life turned around.