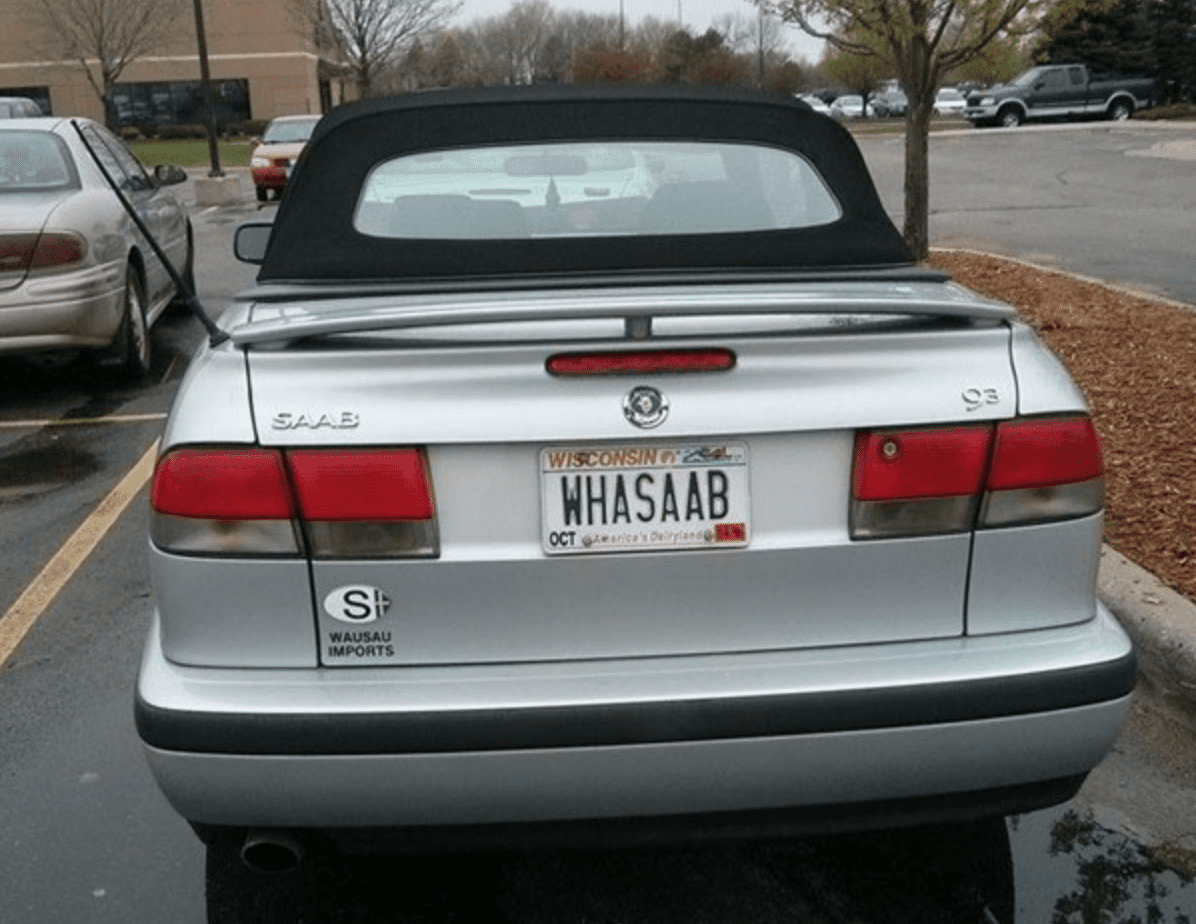 15 Funny License Plates That Will Have You Cracking Up

Who doesn’t love it when they see funny license plates while driving? Many of these hysterical plates provide plenty of laughs during your morning commute or when stuck in traffic. It is crazy to think how creative people can be, managing to craft a funny word or statement in seven or eight characters.

While some vanity plates will cause you to shake your head in disgust, most provide lots of laughs. Whether it is a clever play on words or a promotion for a person’s business or career, funny license plates are good fun.

While the DMV does its best to make sure license plates are above board, every now and then one slips through the cracks. Some feature upsidedown letters, logos, phrases, or just laugh-out-loud words that will have you chuckling. So what are the funniest license plates doing the rounds? Here are 15 personalized plates that will bring a smile to your dial. 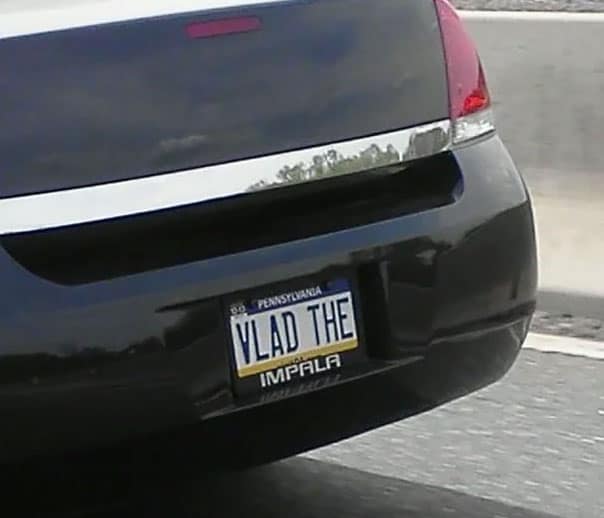 This funny license plate is a play on words, using the model of the car to get a laugh. The Impala is a Chevrolet model that is now no longer in production. A flagship of Chevrolet’s range and one of America’s best-selling cars, the last Impala drove out of the factory in 2020.

This cheeky car owner has kept the model of the car underneath his license plate, with the plate itself reading ‘Vlad The.’ Put the two together and you have Vlad The Impala. For history buffs, Vlad the Impaler (or in this case, Impala), was a bloodthirsty Romanian warrior on who the story of Dracula is based. Fingers crossed he’s not the actual driver behind the wheel, because if you cut him off you might not live to see the next day. 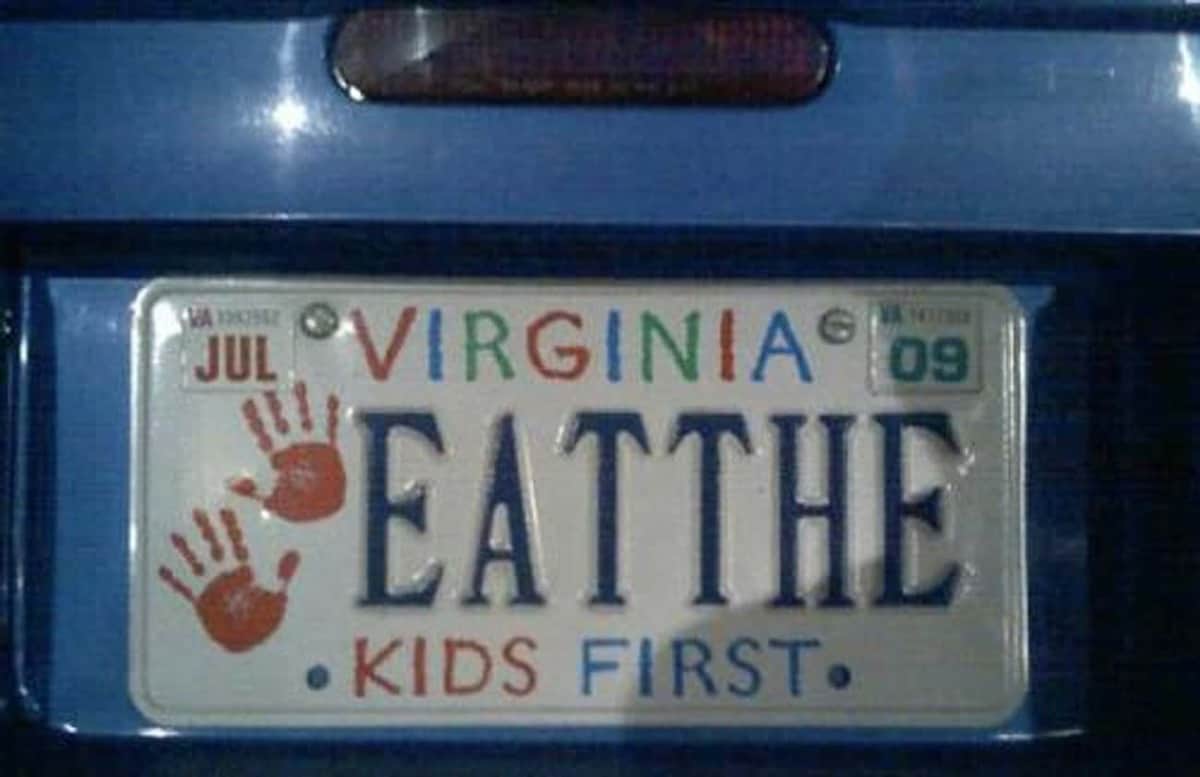 This Virginia personalized plate is one parents will understand. If things go to shit and the world is on the brink of collapse, it’s good to know you can trade your kids for food. It’s great to have options right? What makes this license plate even funnier is the use of childlike handwriting and the two child handprints. The different colors also give it a made-in-kindergarten feel.

While we are sure this family doesn’t actually want people to eat their children, it would no doubt give you a laugh if you saw it while driving on the freeway. 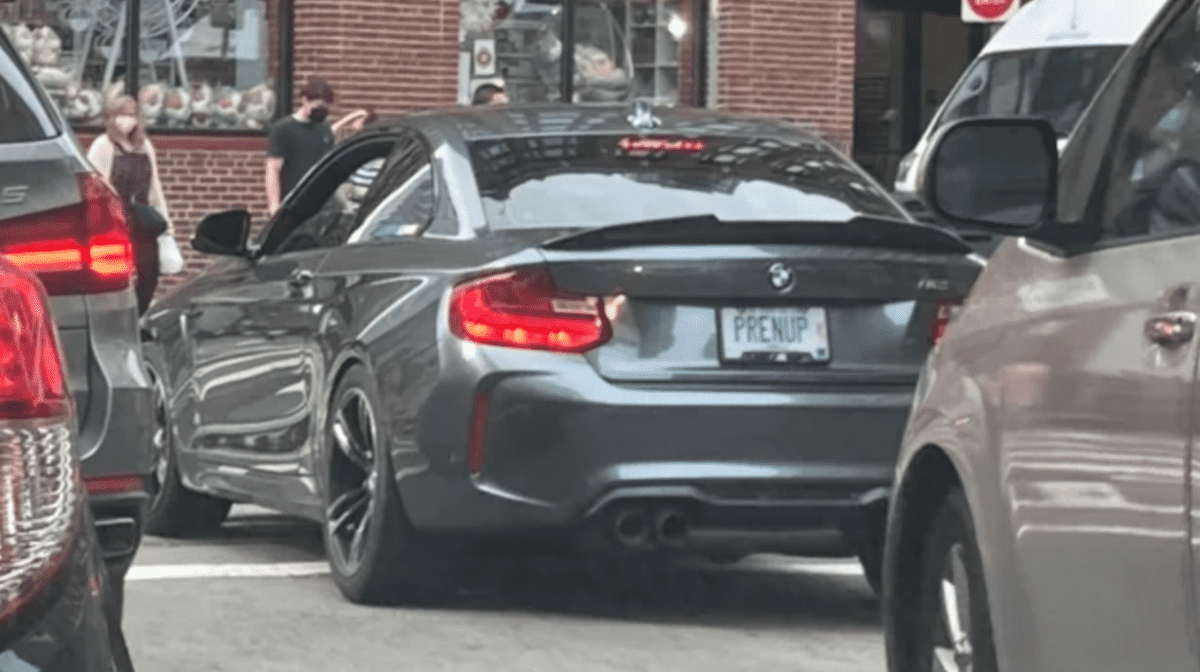 Here is a little reminder to all those rich guys about to get married. Get your partner to sign a prenup! While this is no doubt a joke, considering the driver is behind the wheel of an expensive BMW, there is a good chance they might be serious about making sure nobody gets possession of their favorite vehicle. 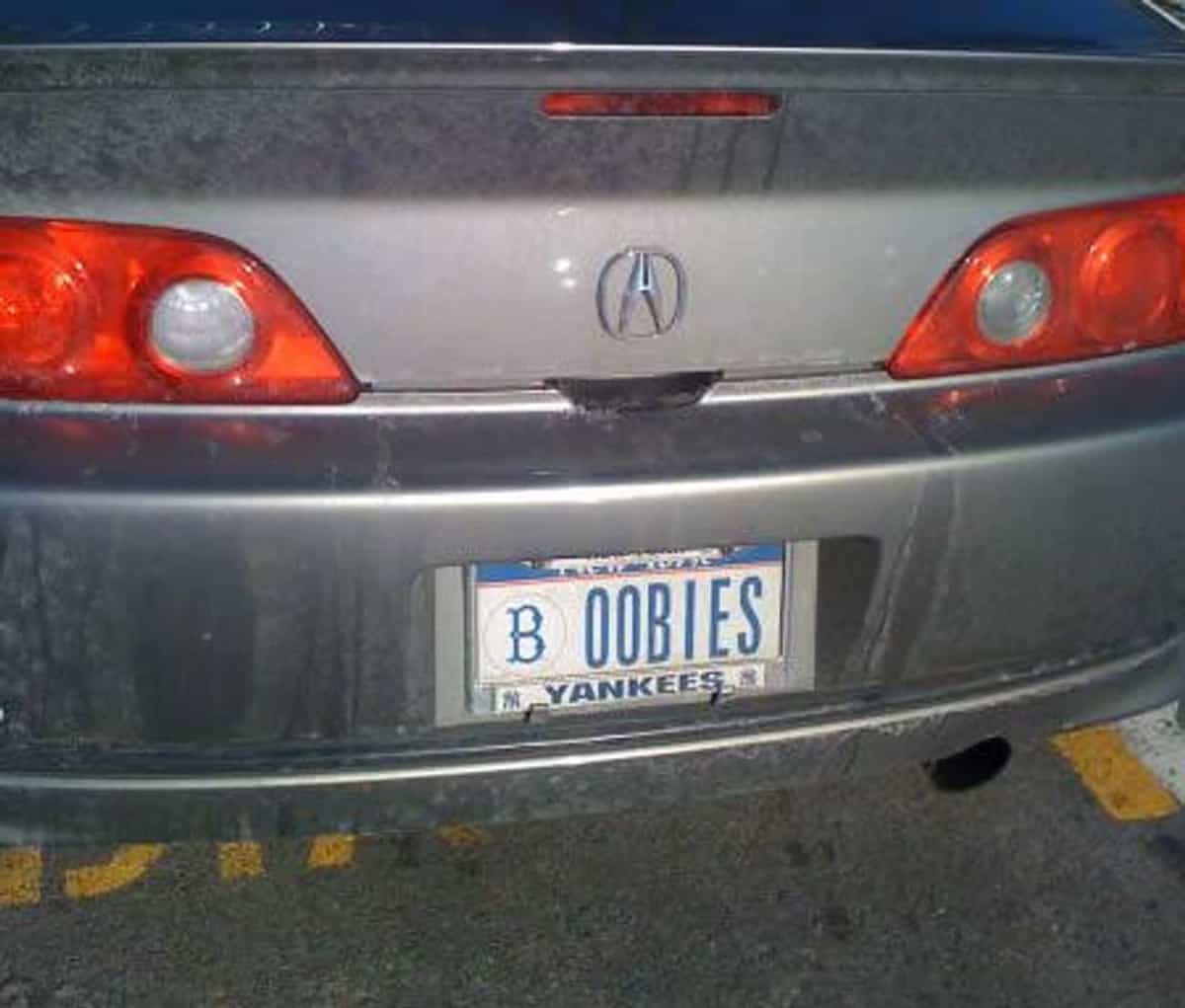 Sure, it’s immature and childish. But anytime you see boobies it’s hard not to let out a laugh. This is lowbrow humor at its best. The driver, an obvious Yankees fan, has got his personalized number plate to show off his baseball allegiances. He would have no doubt submitted the word oobies, and while strange, the customer service people at the DMV didn’t realize that there is a B at the start of the plate before your personalized word. The end result is a vanity plate that men of all ages will find hilarious. 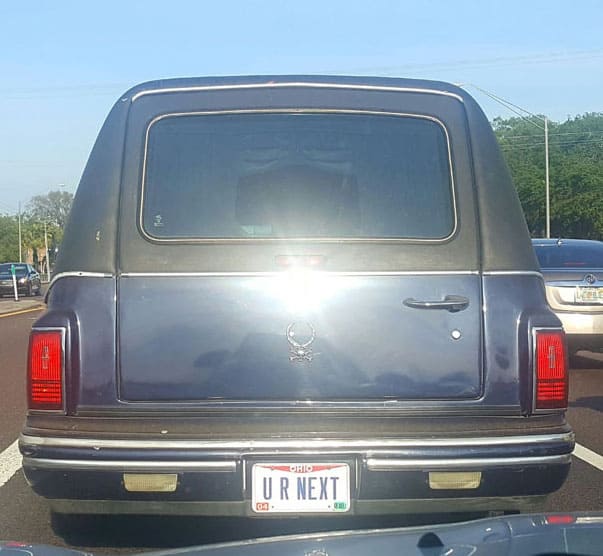 Here is something you don’t want to see while driving. This hearse has a license plate that reads ‘U R Next.’ Pointing out your demise could be coming up soon isn’t great reading when behind the wheel. It would be interesting to know what funeral parlor this hearse belongs to, as they must have a dark sense of humor to put something like this for its vanity plate. 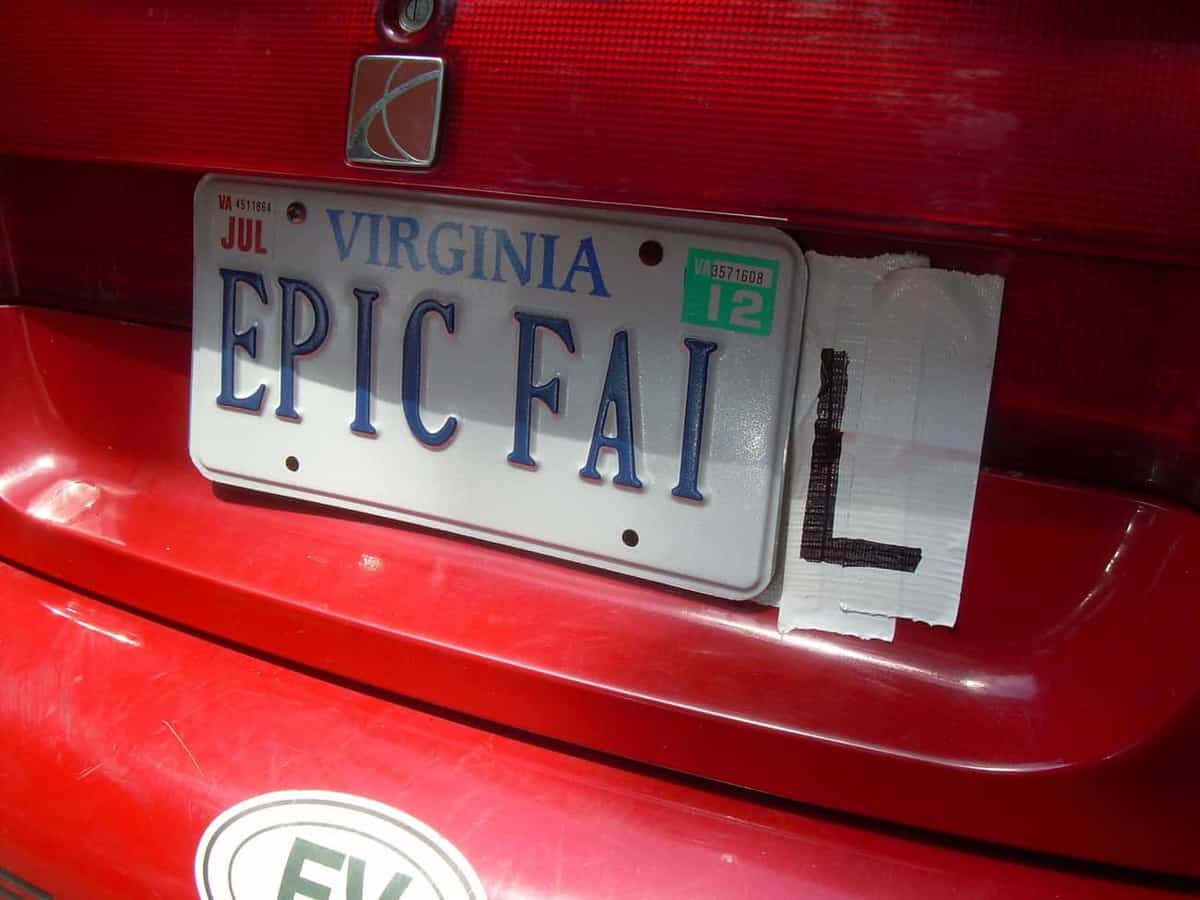 Now here is a creative way to highlight your license plate. This Virginian driver’s personalized plate might not look complete at first, but that is all part of the joke. Reading ‘Epic Fai,’ the clever driver has added an L in paper so the plate reads ‘Epic Fail’ in full. See what they did there? This license plate gets extra points for the setup of a joke that is quite clever and sure to provide plenty of laughs to any passersby. 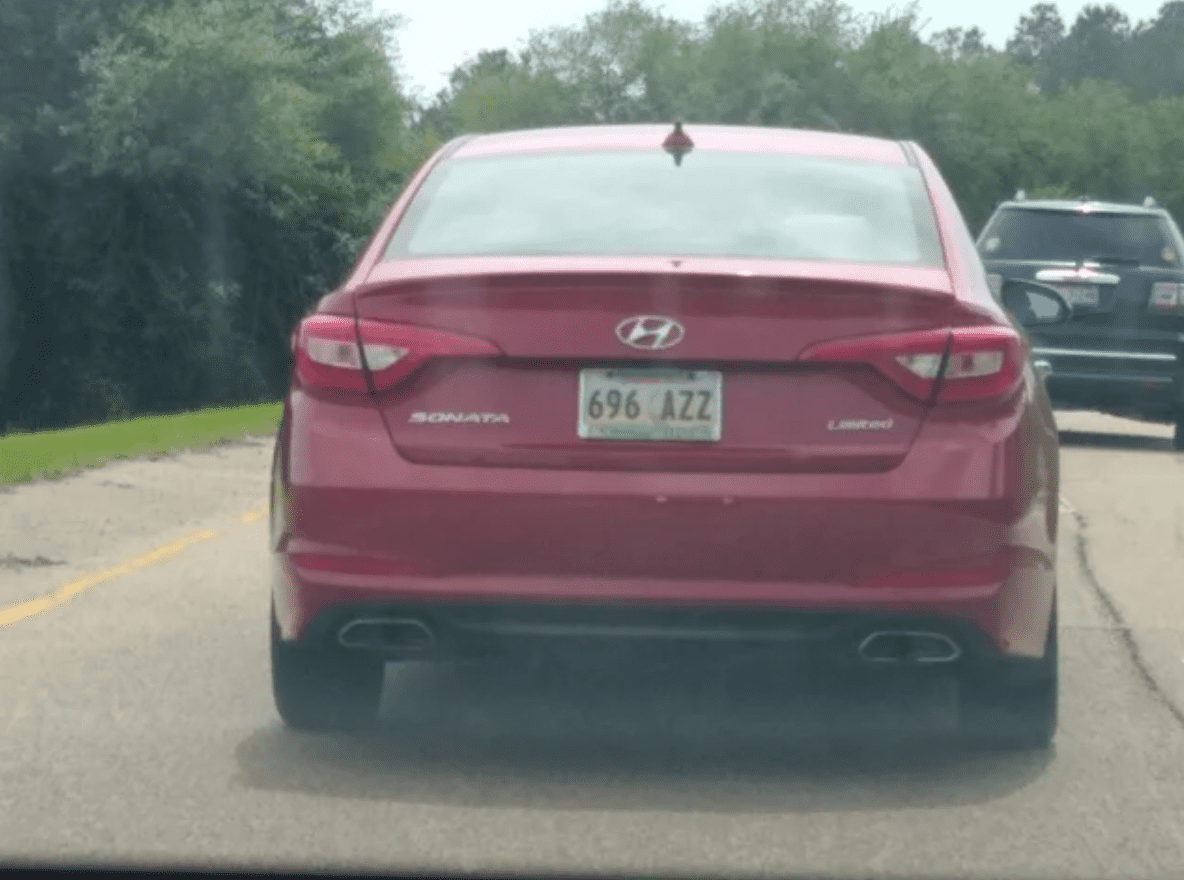 Anyone for a bit of sexy time? Whether this was planned or not, it sure is funny. While it might look like a random selection of numbers and letters, it actually details this driver’s thoughts on oral sex. The first 69 references the sex act itself, while the next six is followed by azz, which when said together sounds like sick as. It’s hard to disagree with this custom plate because oral sex really is sick as. 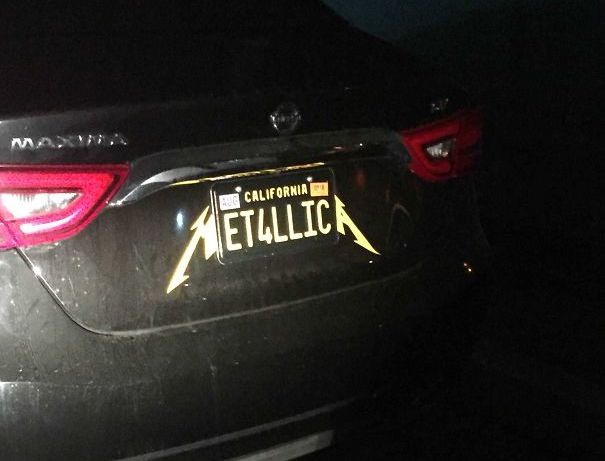 Similar to the Epic Fail number plate from earlier, this one uses a few extra letters to create a one-of-a-kind license plate. This driver is obviously a big Metallica fan. While Metallica is too big of a word to fit on a custom plate, they have had to settle for ‘etallic,’ but have gone the extra mile and added the M and the A on either side of the plate. This way it reads Metallica. Why the four you ask? Most likely someone had already taken Metallica for some other funny license plate. Or maybe the four means Metallica ‘forever?’ Whatever the case, this is a clever and funny license plate that will appeal to heavy metal fans.

This vehicle sports another funny and clever personalized plate. The car itself is a Saab, so the owner has decided to play off this with a plate that reads ‘Whasaab.’ Taking the classic Budweiser ‘Whatsup’ catchphrase and combining it with the make of the car results in a hilariously witty license plate. Beers all round! 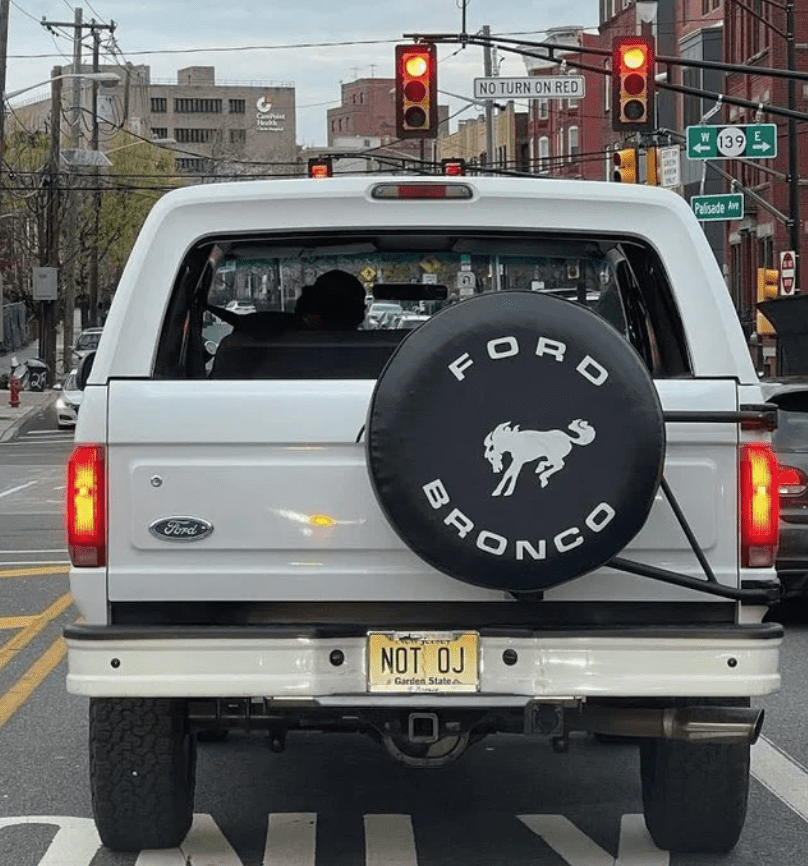 Remember when OJ Simpson was on the run from police after the murder of his ex-wife and her new partner? Well if you need your memory jogged, he was being chased in a white Fiord Bronco. This driver has obviously remembered and got a license plate that serves as both a warning and a joke. While maybe not in the best taste, depending on how you feel about OJ, it is sure to have people talking when they drive past. It’s also sure to keep the police off this driver’s tail. 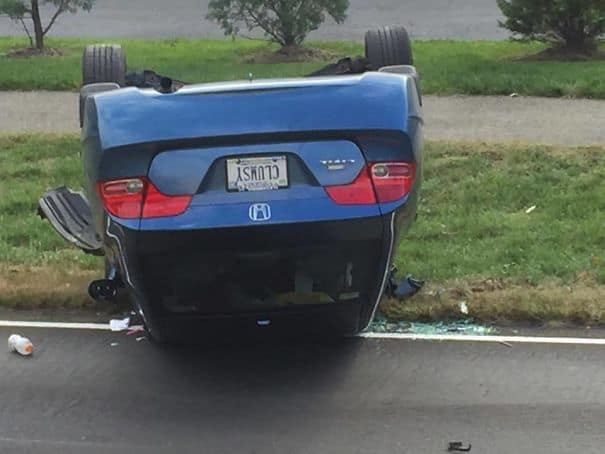 This license plate and the picture of the car it is on are all you need to see to get a laugh. The car has a plate that reads ‘Clumsy.’ The car also happens to have been in an accident and is lying on its roof. There is a story behind the picture though. The person driving was apparently eating a bowl of cereal when they dropped it in their lap. So not only are they a clumsy driver, but a clumsy eater as well. Might be best if they stay away from driving for a while. 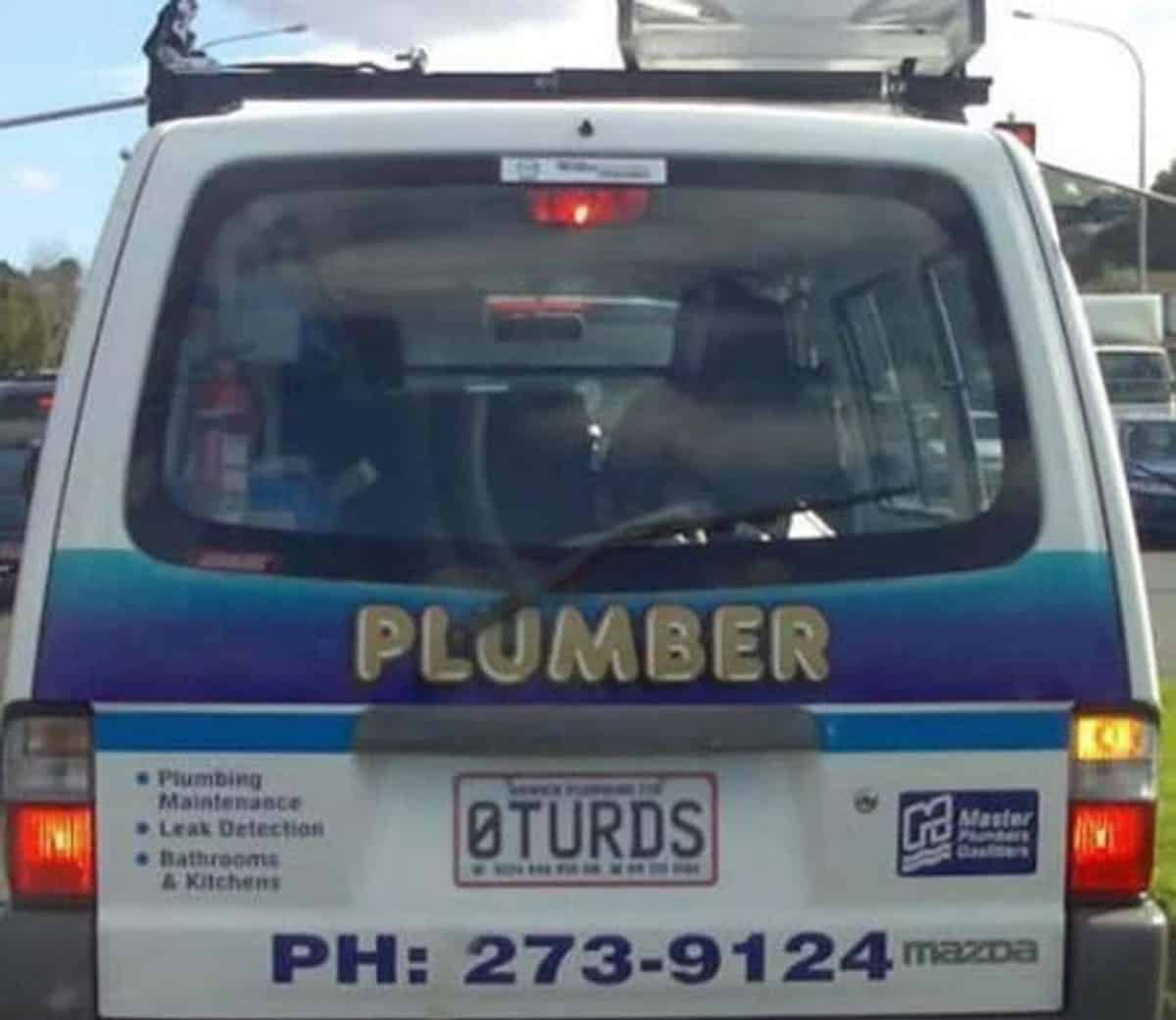 On a normal car, this might look a bit strange, but when on a plumber’s van it makes total sense. The driver is guaranteeing there will be no turds when they fix your plumbing problems. A bit of toilet humor never hurt anyone, with this license plate sure to cause a few laughs when stopped at the traffic lights. 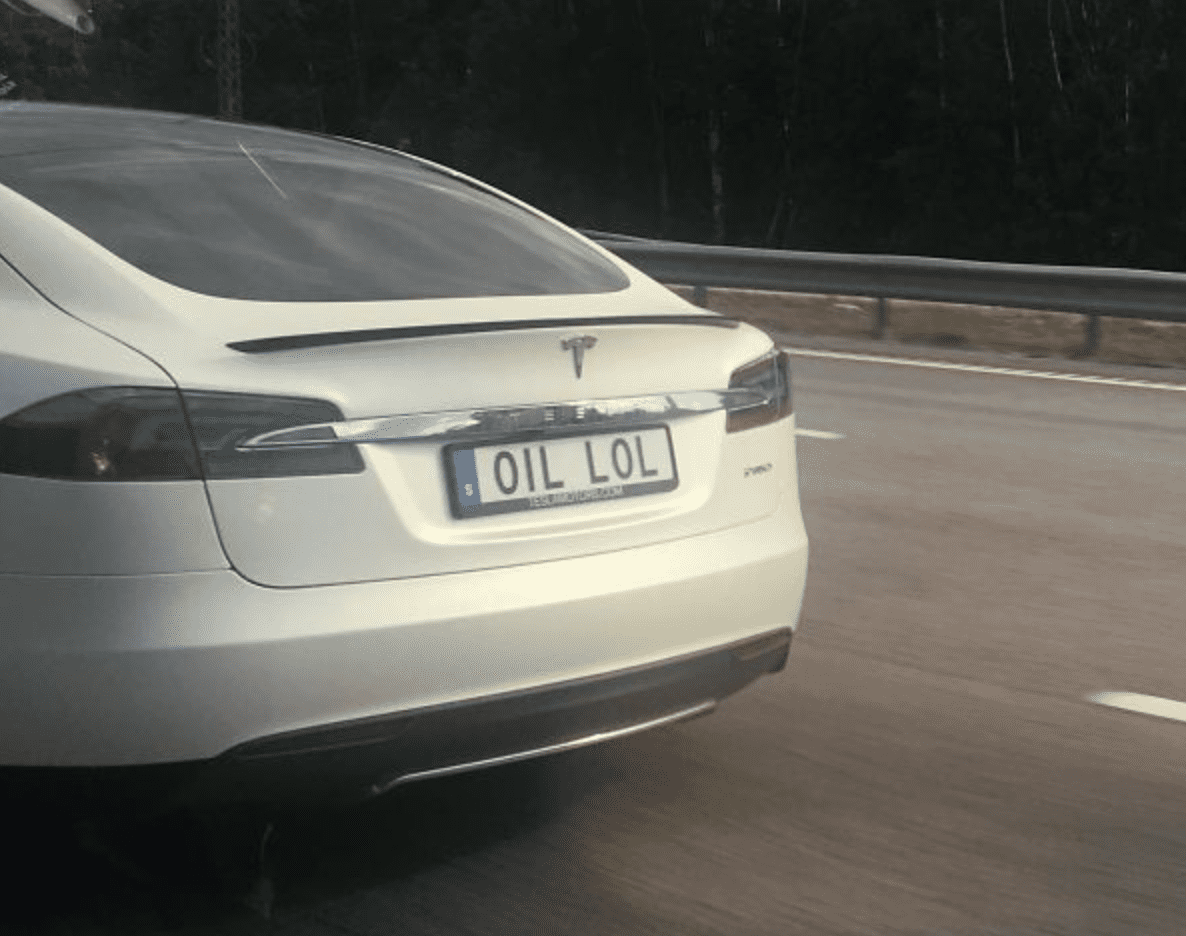 This Tesla owner is letting everyone know their thoughts on fossil fuels. As most people are aware, Elon Musk’s Tesla series of automobiles is electric. This license plate is taking the mickey out of non-electric cars with a classic millennial repsons: ‘LOL.’ With the current price of fuel it is no wonder the owner is having a laugh. 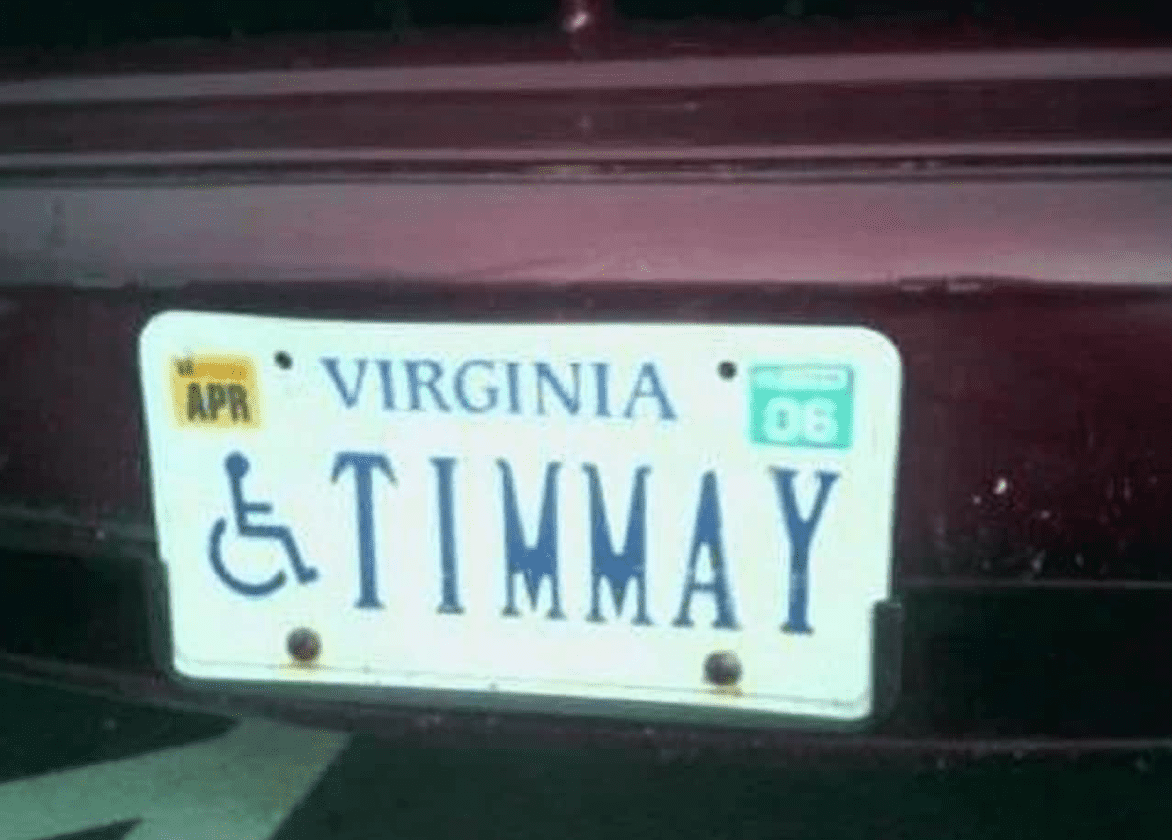 Here is one for South Park lovers. This license plate references the character Timmy Burch. In the series, Timmy is a handicapped classmate of Stan Marsh, Kyle Broflovski, Eric Cartman, and Kenny McCormick. He gets around in a wheelchair and has a limited vocabulary, often just saying his name when spoken to. This plate not only spells out the way Timmy says his name but also has an image of a person in a wheelchair. This one is sure to get some laughs on the road. 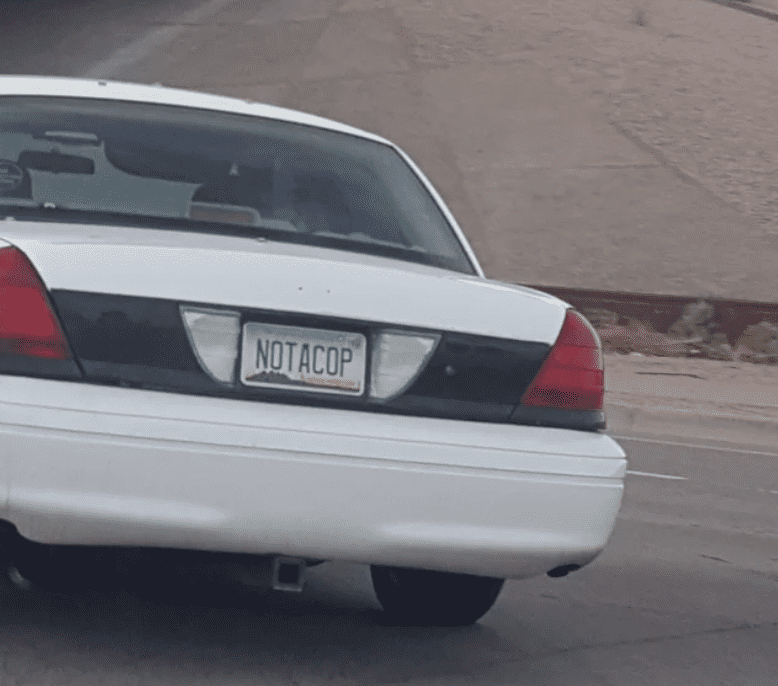 Would you believe this driver? Their license plate clearly states that they are not a cop, but maybe that’s what they want you to think? Or maybe the owner is actually a criminal who hopes their personalized plate will keep the actual police away? Whatever the reason, it is a funny license plate that deserves a spot on this list.