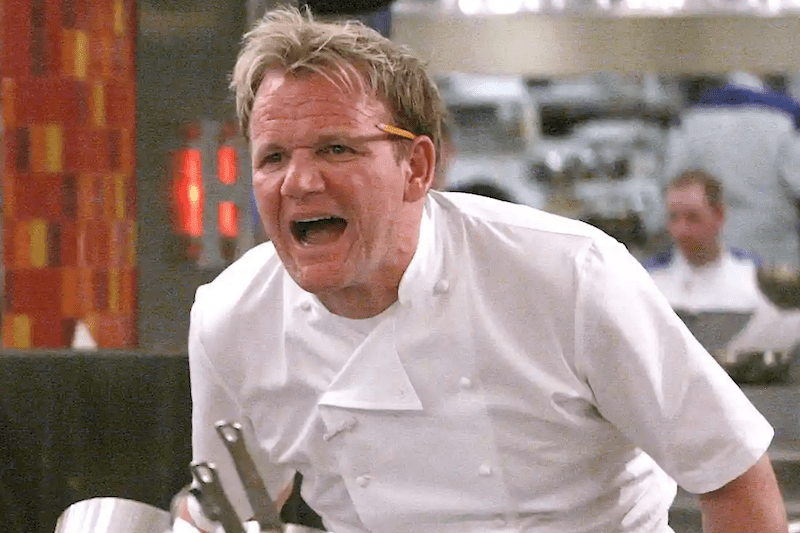 No TV chef has made quite the impact as Gordon Ramsay. The Scottish cook is a global phenomenon whose restaurants have been awarded an incredible 16 Michelin stars. The 55-year-old has eateries all over the world, from Britain to America to Japan, and is one of the most influential chefs of the past two decades. But it’s not just his cooking that’s made him a star. Ramsay has a temper and a foul mouth. Combine this with his culinary skills and you have the perfect reality TV star. This is evident in the success of his shows. Ramsay’s reality series have consistently done big numbers, with people enjoying Ramsay exploding in outrage with his witty, profanity-laden rants. As the internet loves a good meme, it’s no surprise Goron Ramsay memes have become a thing.

These memes often take the form of Ramsay’s comments from shows such as Hell’s Kitchen and Ramsay’s Kitchen Nightmares. Remember his classic “idiot sandwich” quote? Others play on his constant swearing while some are pop culture references. Wherever they take inspiration, Gordon Ramsay memes are always hilarious and will leave a smile on your face.

In honor of the celebrity chef and his penchant for swearing, here are 20 of the best Gordon Ramsay memes to enjoy. 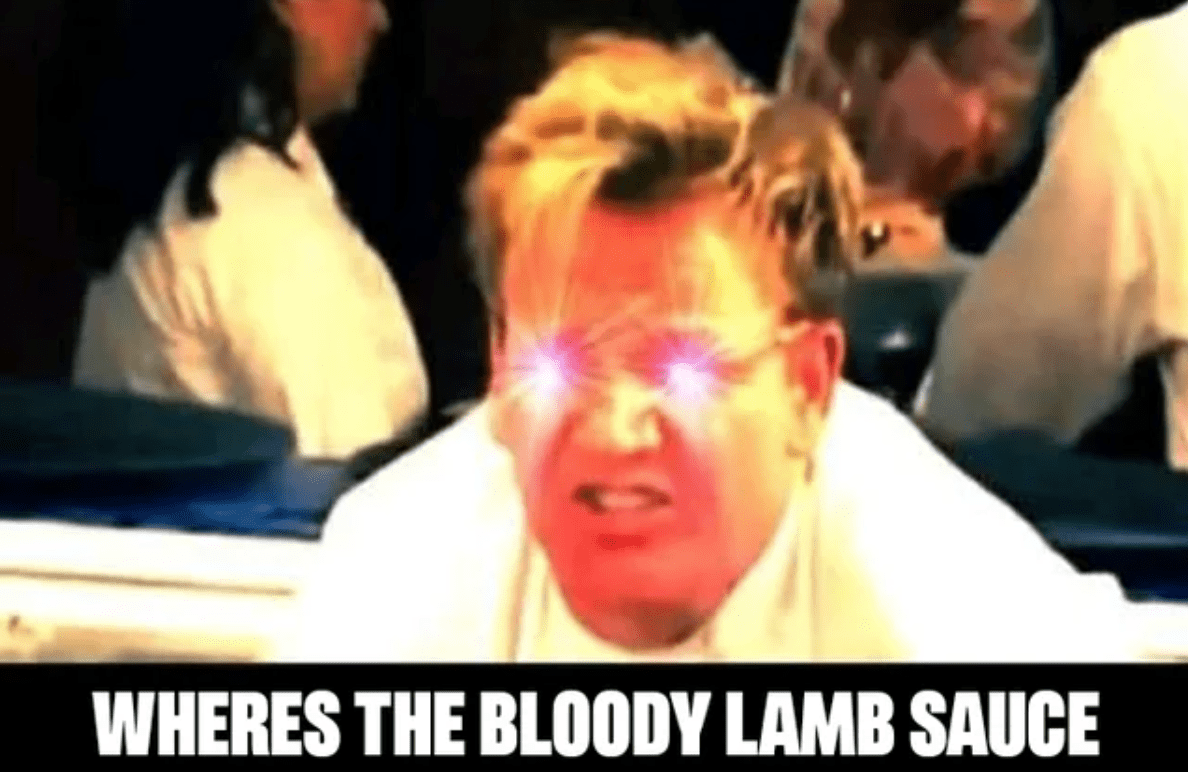 This classic phrase from Gordon Ramsay took the internet by storm. During a 2016 episode of Hell’s Kitchen, Ramsay can’t find the lamb sauce that should be accompanying the dishes being cooked. When he asks where it is and nobody answers him, Ramsay flies off the handle and repeatedly starts shouting “Where’s the lamb sauce?” Needless to say, it didn’t take long for the internet to pick this up and turn it into a meme, with this one showing Ramsay’s anger as he looks ready to shoot laser beams from his eyes. 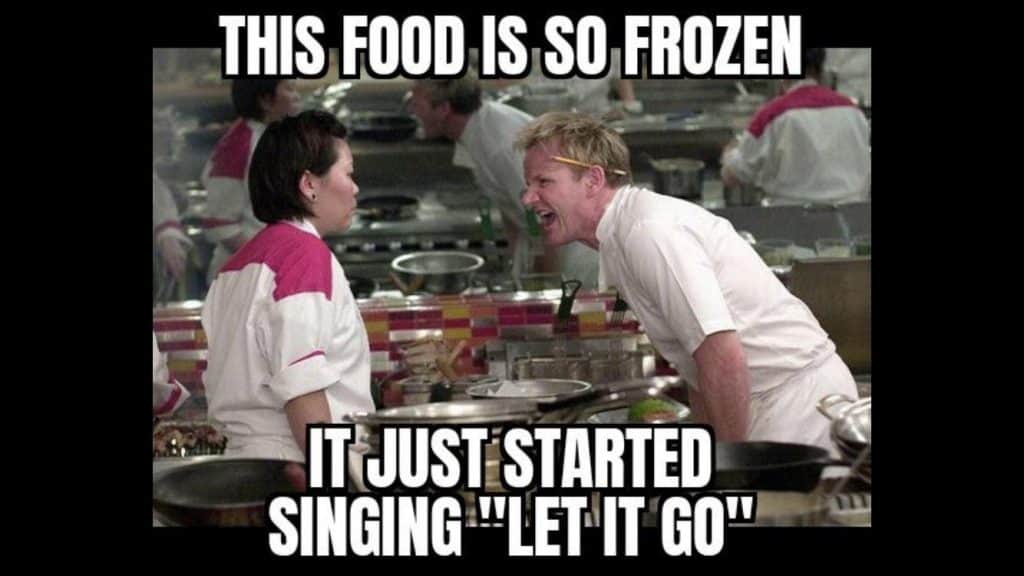 Gordon Ramsay makes a hilarious Frozen reference when discussing some undercooked food prepared by a contestant on Hell’s Kitchen. 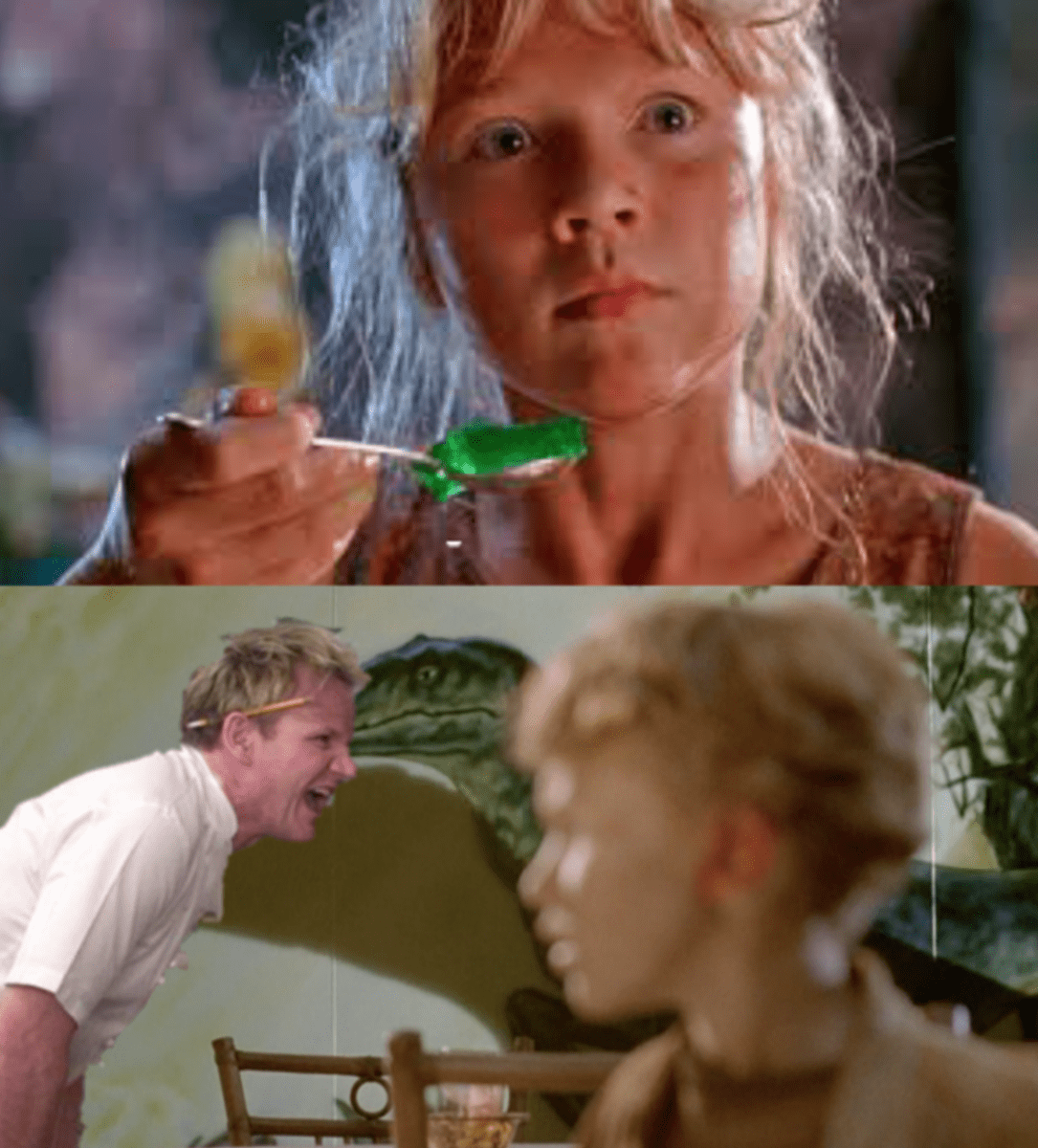 This meme takes a classic scene from Jurassic Park and adds some Gordon Ramsay. While Lex is enjoying some jelly, she and her brother are confronted by raptors. In this meme, the raptors are replaced by a screaming Ramsay. If you’ve seen the film you will get why this one hits the spot. ‘

4. Even Grandma Is Worried 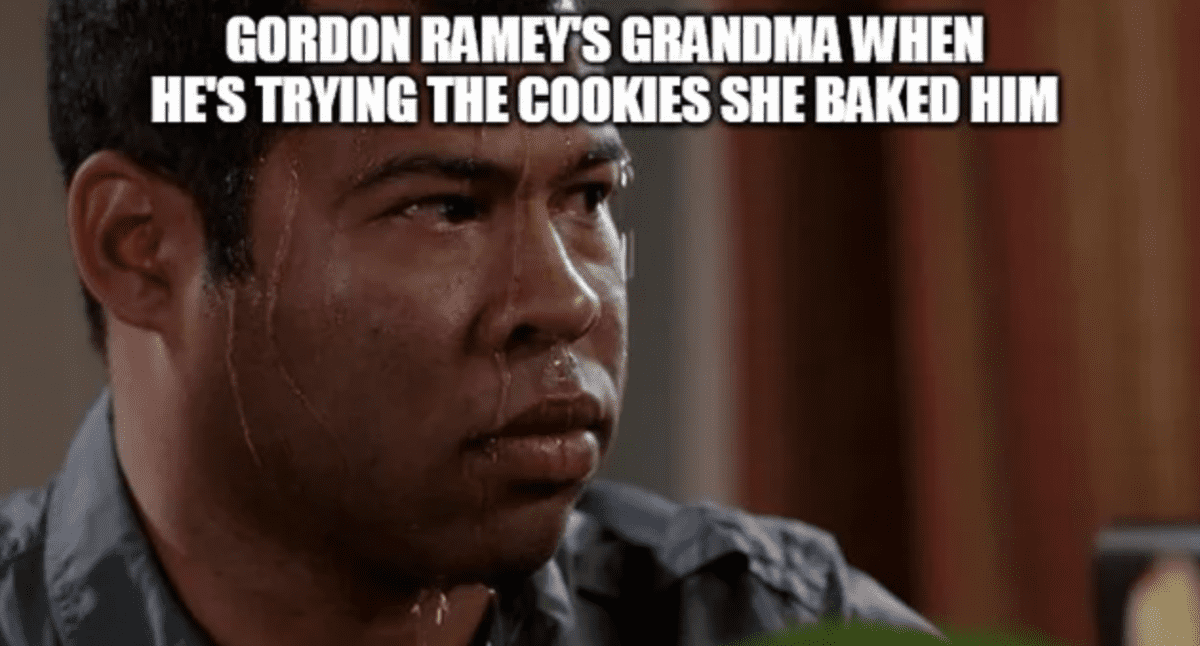 Even Gordon Ramsay’s grandma gets stressed out letting him taste-test her cooking. 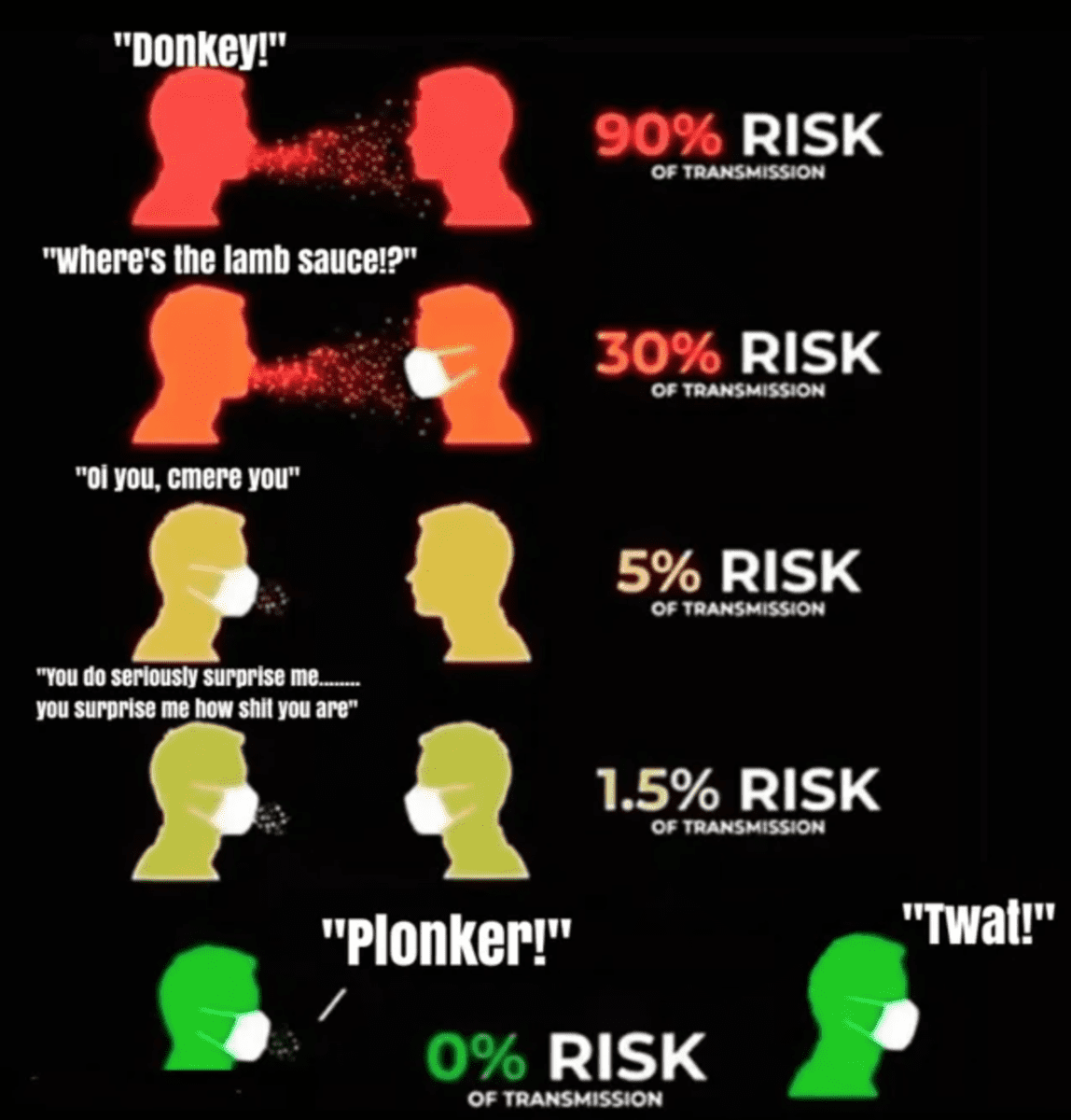 This funny meme references social distancing and Gordon Ramsay’s profanity-laden speech. The meme uses some of Ramsay’s most well known put downs to show the level of transmission based on the amount of anger he spews. The more steamed he gets, the more he yells, and the more his spit is likely to hit your face. Clever and funny. 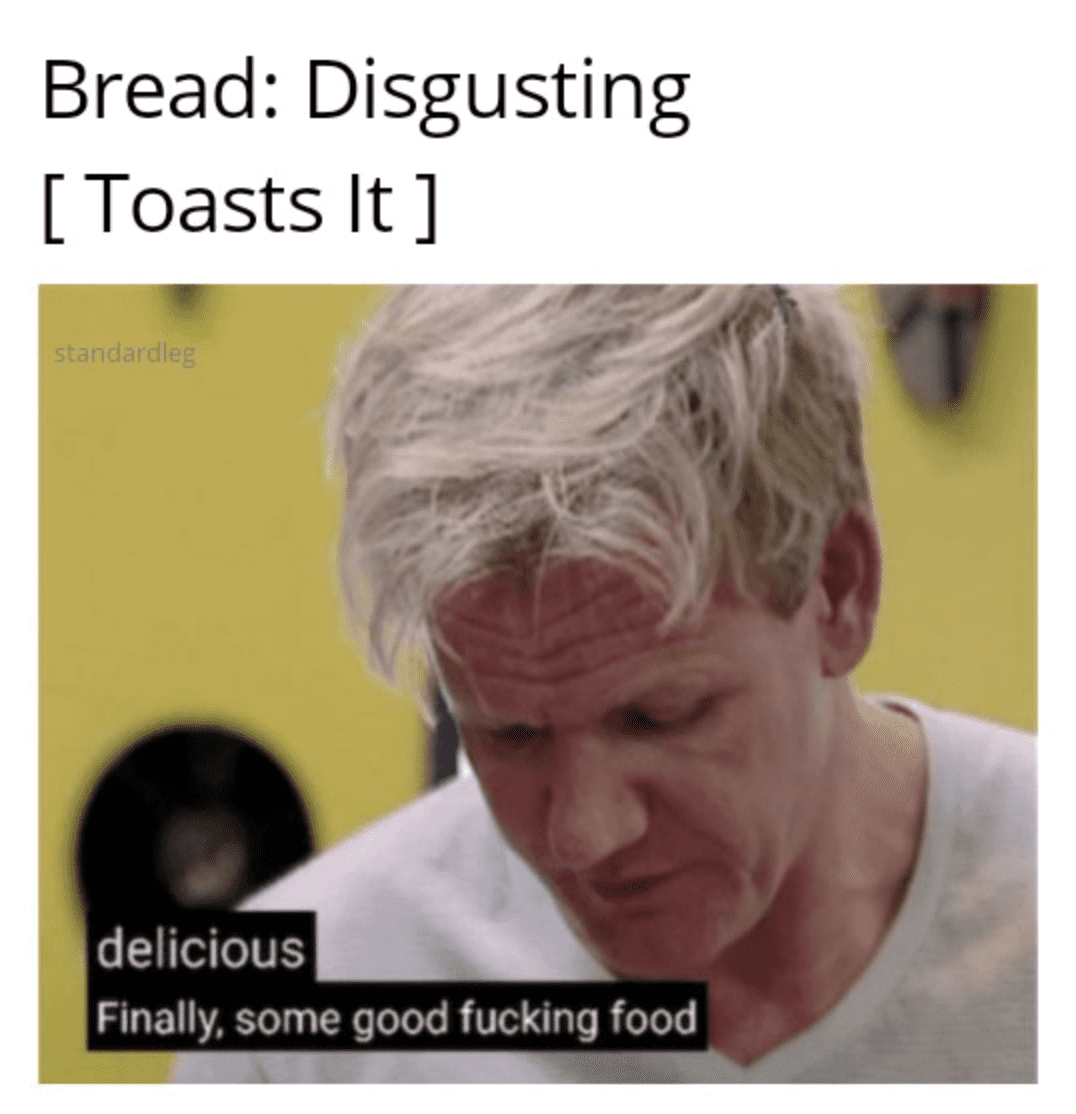 Showing Gordon Ramsay’s at times fickle opinions, this meme shows how easily he can be impressed. 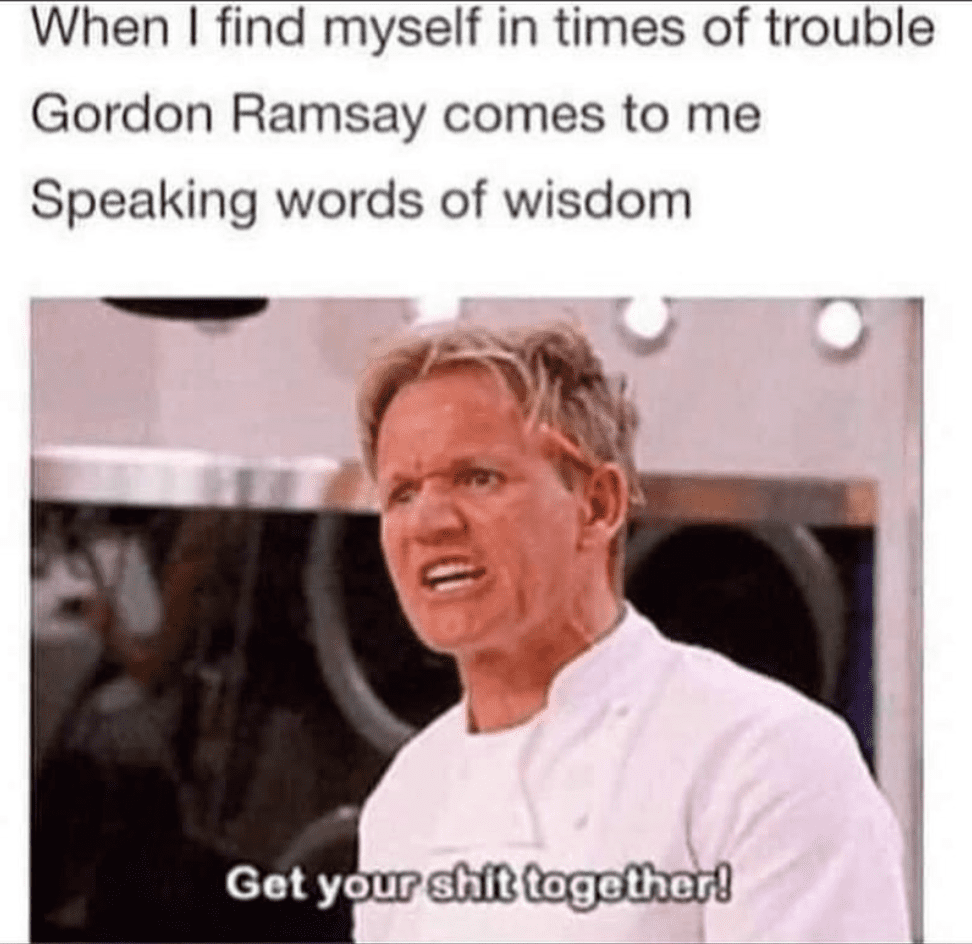 If you need some motivation, you can always rely on Gordon Ramsay to have your back. This is a solid Gordon Ramsay meme sure to bring a few laughs and get you ready for the day ahead. 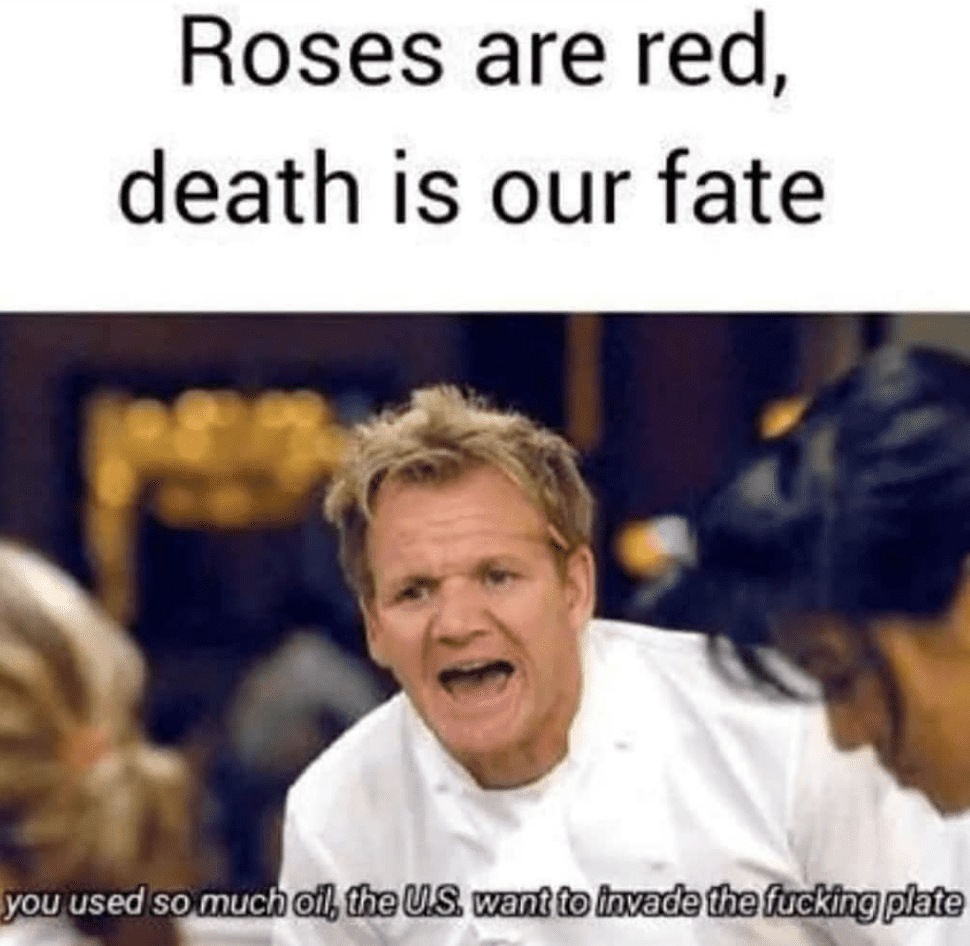 A play on the classic ‘Roses are red, violets are blue’ poem from chef Ramsay. 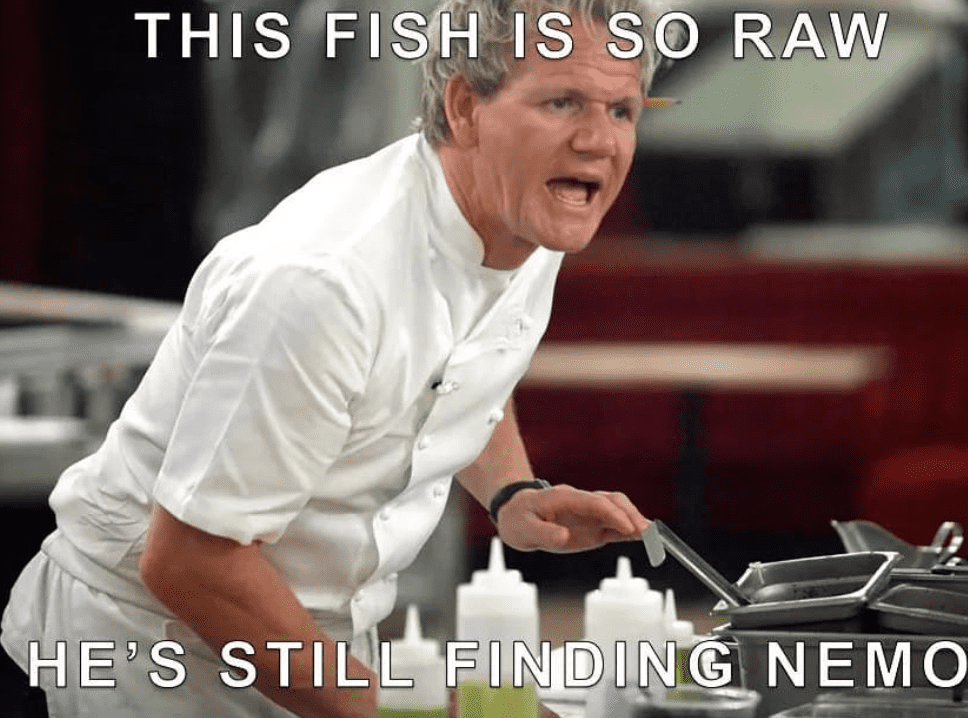 Nobody wants to be served raw fish.

10. The Difference Between Teachers 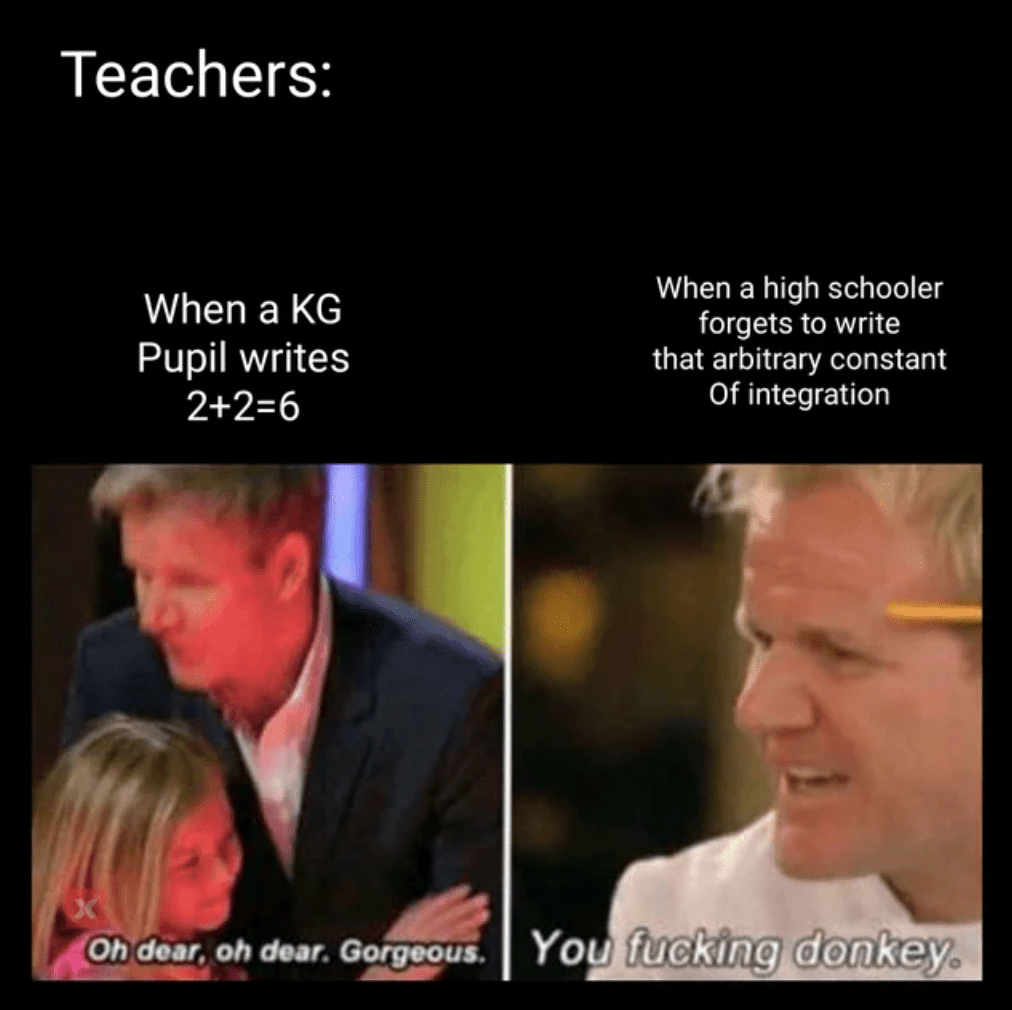 This meme uses Gordon Ramsay to show the difference between how teachers at different year levels treat their students. Hard to disagree. 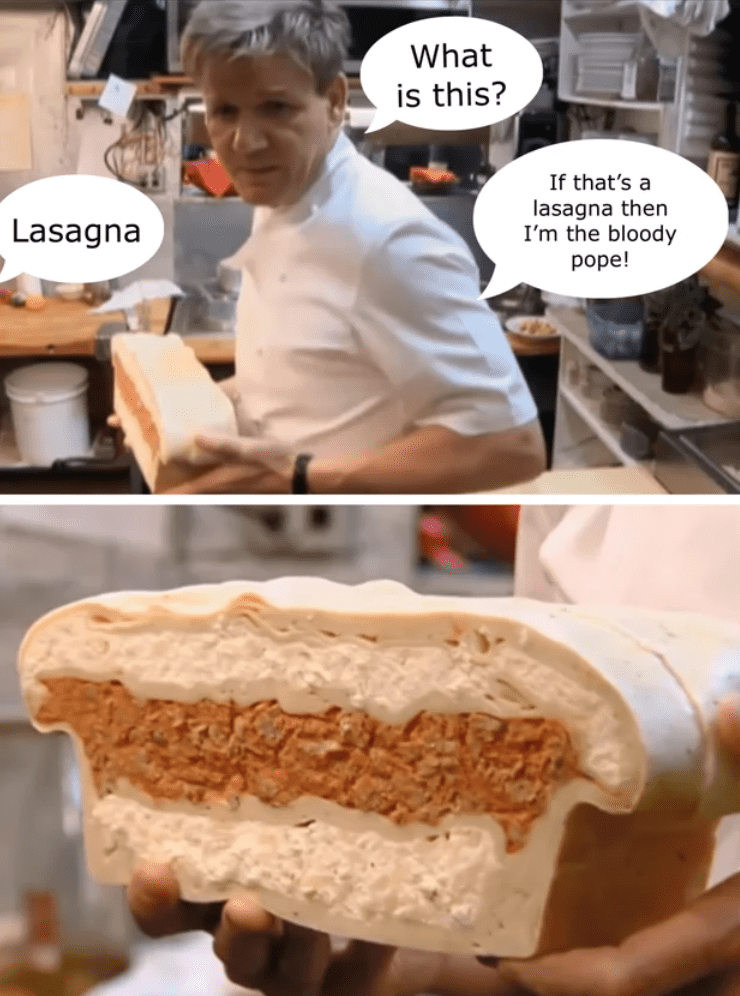 Gordon Ramsay memes don’t get more literal than this. That is definitely not lasagne and there is no way in hell Ramsay is the pope. 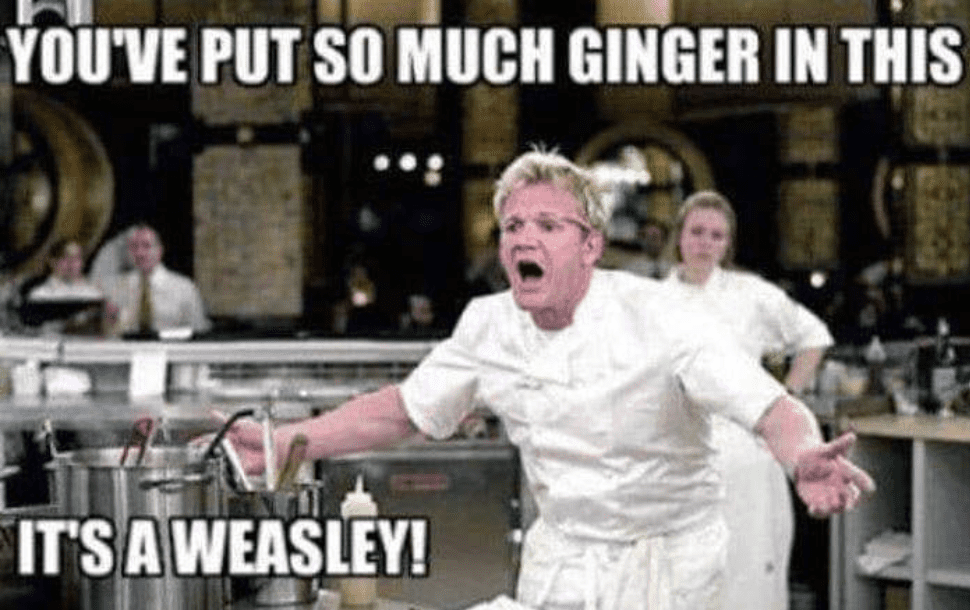 The crossover we never knew we needed. Get Ramsay in the next Harry Potter movie. 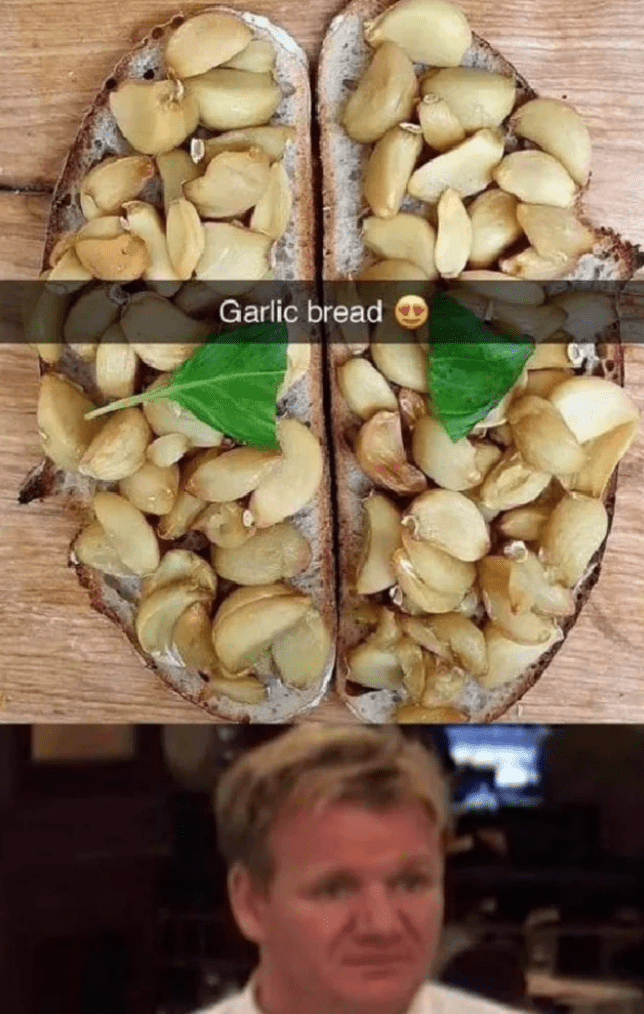 Gordon Ramsay’s face says it all. 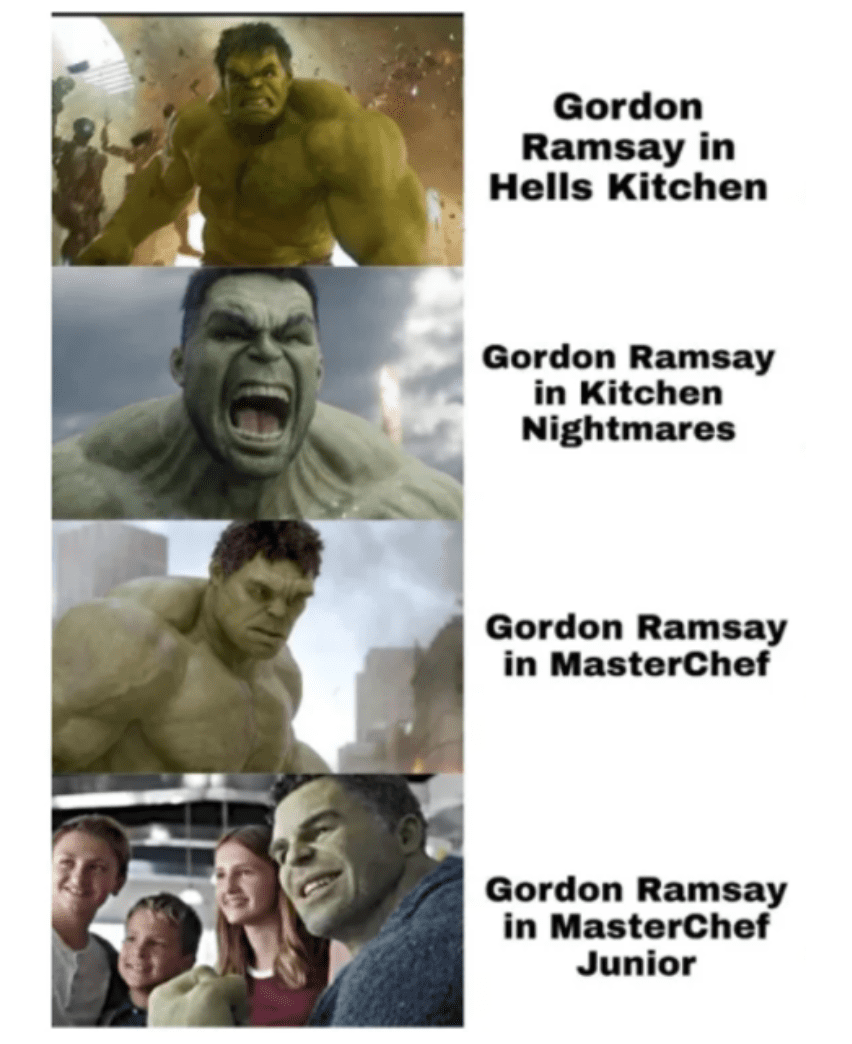 Depending on what show he is on, often depends on Gordon Ramsay’s vitriol. As you can see by this chart, his anger changes greatly from Hell’s Kitchen to Masterchef Junior. 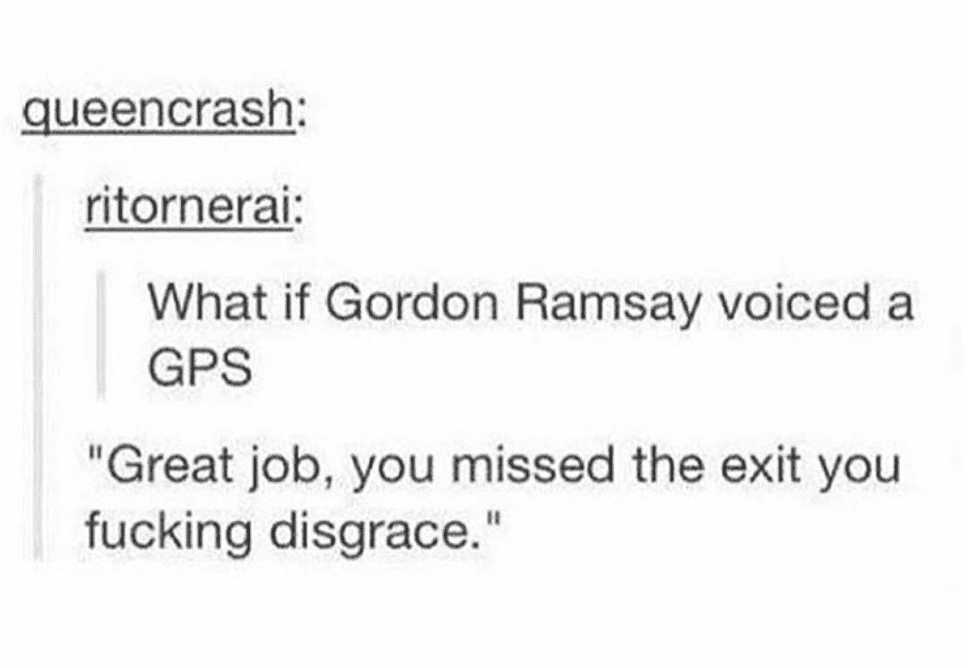 Not the words you want to hear when you miss the turn.

16. The Last Thing You Want To See 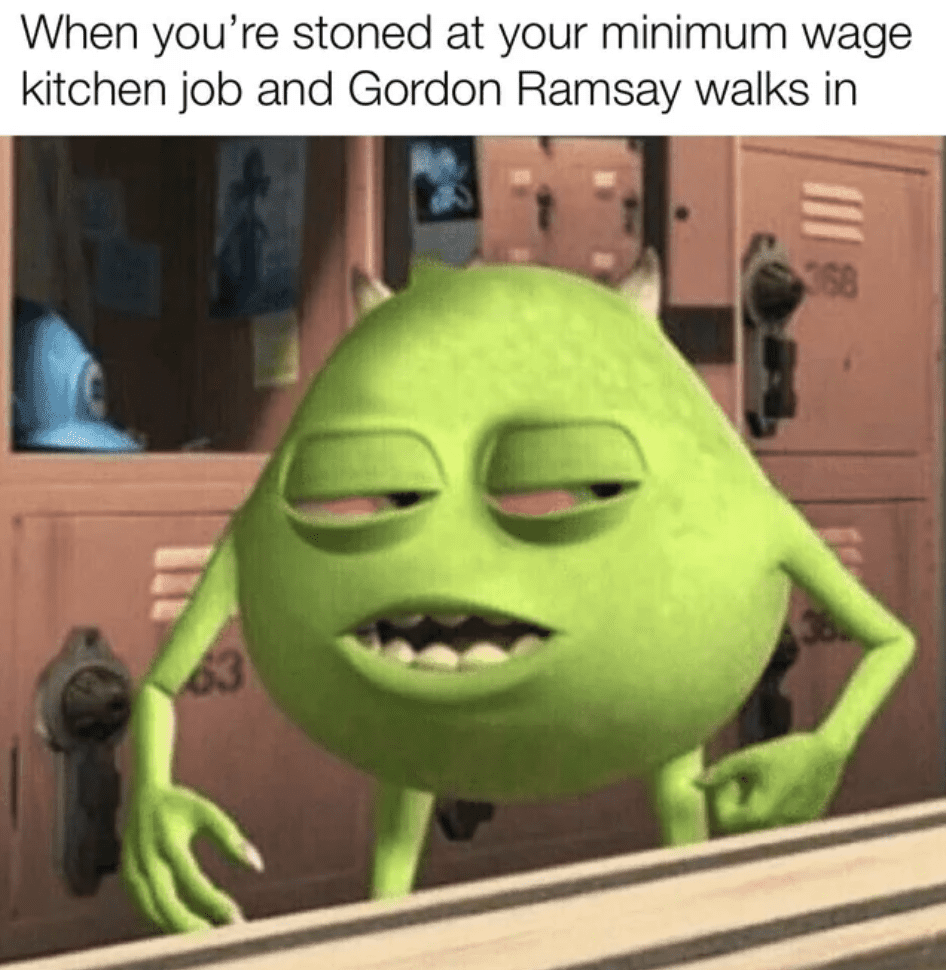 Imagine working in a kitchen and you’re stoned out of your mind and then Gordon Ramsay walks in? Your best bet would be to hang up the apron and call it a day before the angry chef gets stuck into you. 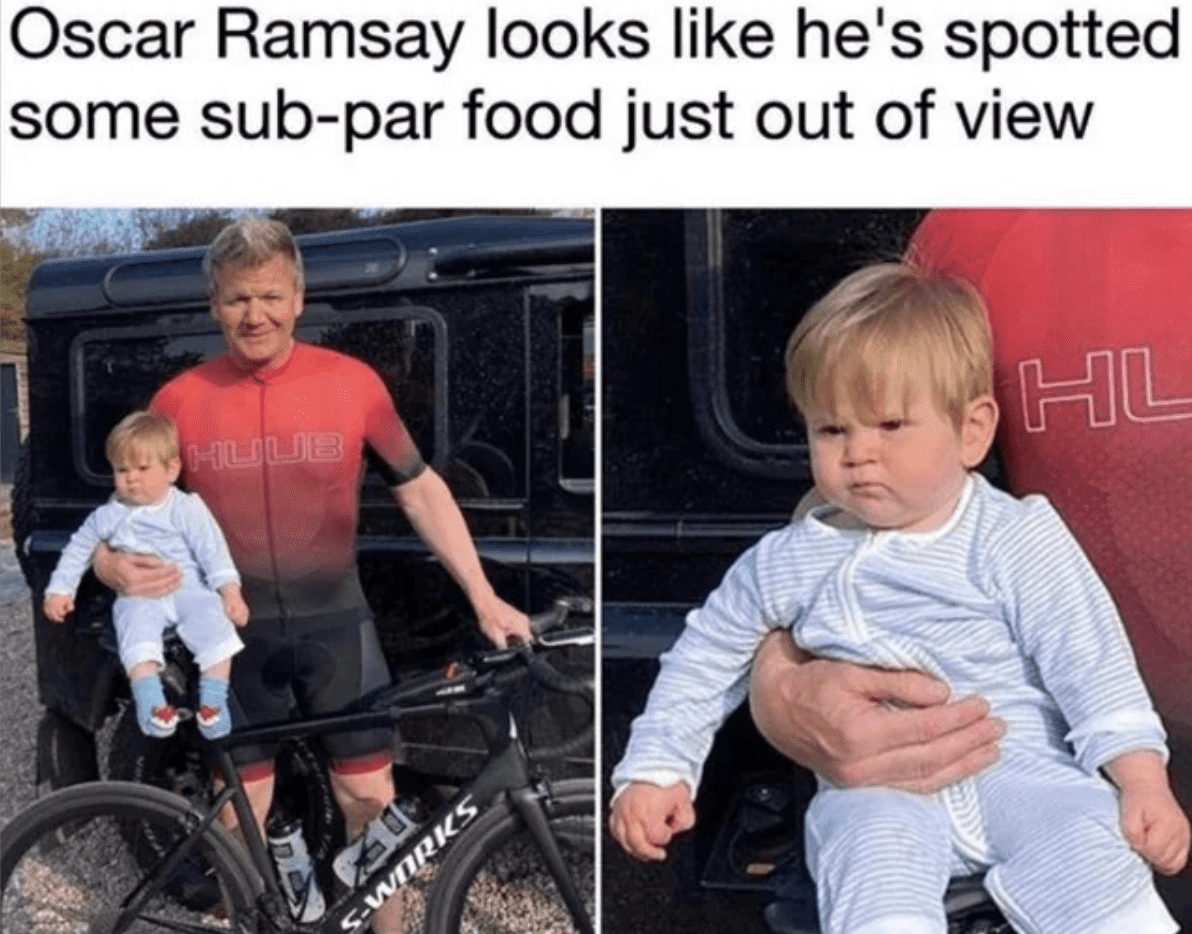 Even famous chef Gordon Ramsay’s son Oscar isn’t a fan of sub-par food. He surely looks to have inherited his father’s dirty look. 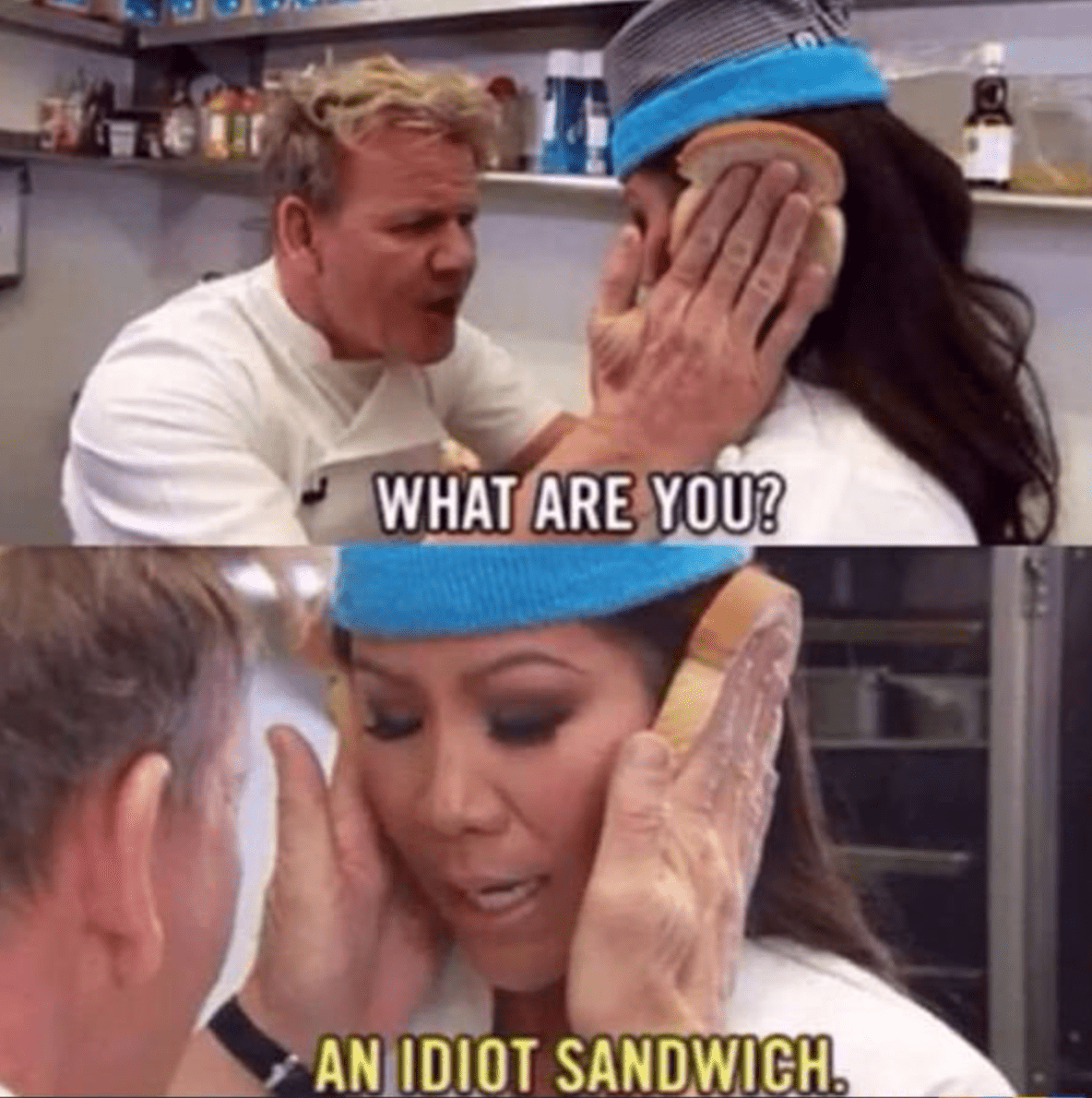 One of the all-time greatest moments from Gordon Ramsay’s time of television is the idiot sandwich. The bit comes from a sketch he participated in on the James Corden show. Ramsay puts talk-show host Julie Chen’s head between two slices of bread while yelling at her. It became a huge meme in 2015, with many variations having Ramsay put the bread between other people’s heads. 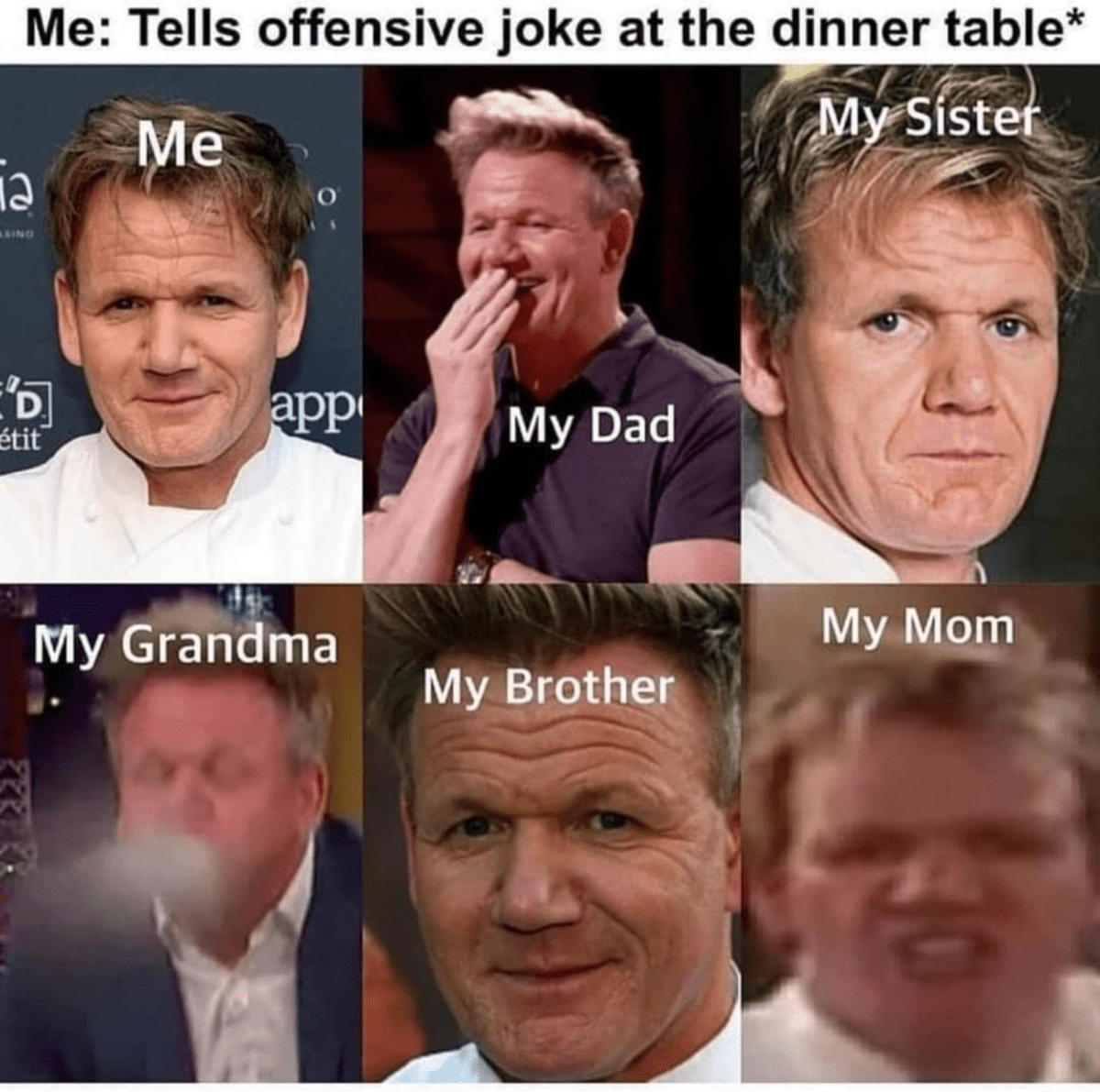 This is a take on another classic meme that shows the different reactions from members of your family using Gordon Ramsay’s facial expressions. Mum isn’t happy. 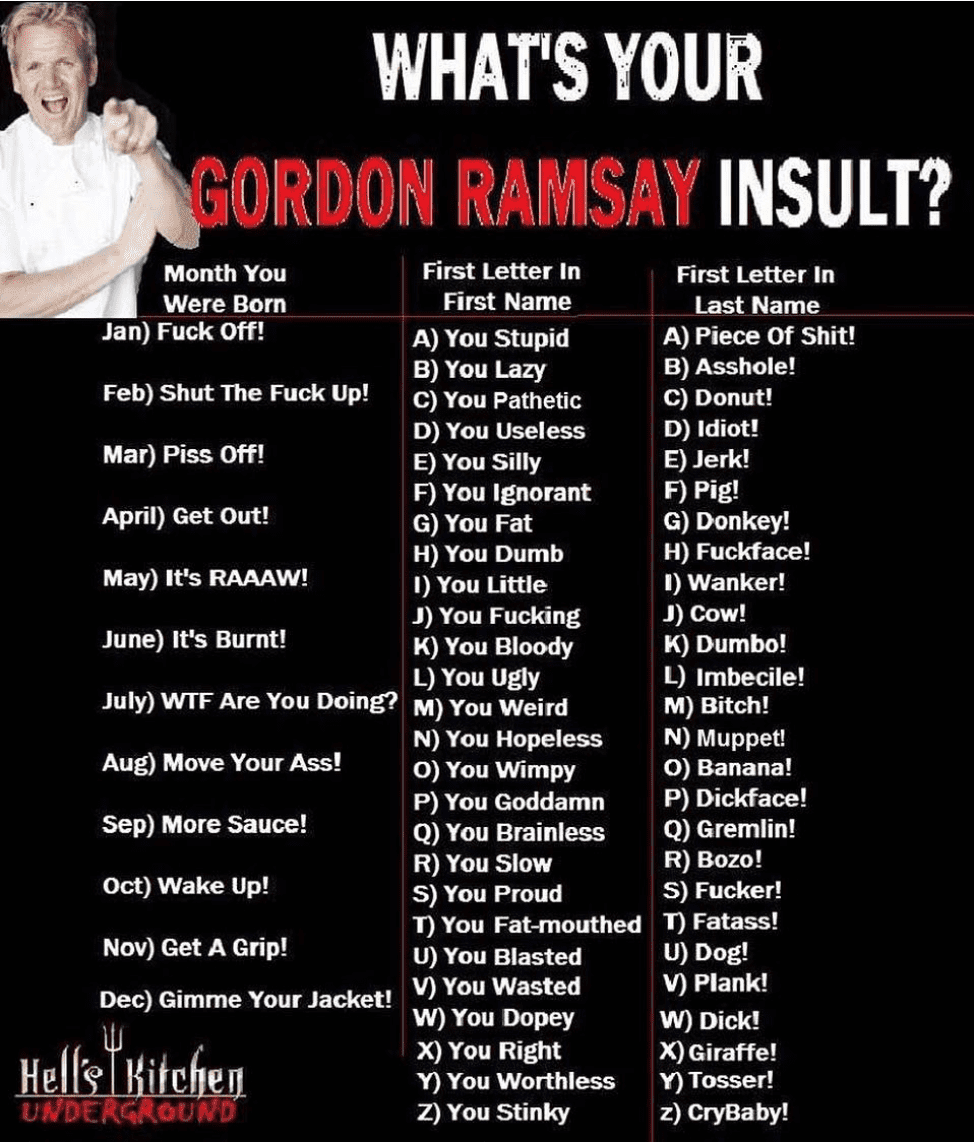 Want to have your own personalized Gordon Ramsay insult? This meme gives you everything you need to create your own iconic Ramsay takedown.