LeBron James is the greatest basketball player currently strutting his stuff on the court. The four-time NBA Champion has pretty much done it all. You name the award and he has won it. He is a once-in-a-generation type player who is arguably on par with the legendary Michael Jordan. Yet despite his unrivaled success, James has often found himself the butt of jokes from fans. Throughout his career, he has been the subject of criticism by fans that often manifests itself as funny LeBron James memes.

These memes have focused on everything from his inability to win a title at the start of his career to his receding hairline. People have also taken shots at his tenancy to go missing in big games at times and his emotional reactions to situations. In truth, there is a LeBron James meme for just about any situation.

Does James deserve all the hate? Probably not, but it has resulted in some hilarious memes. Here are 15 of the funniest LeBron James memes on the internet. Enjoy!

1. LeBron Was Carried To His First Three Rings 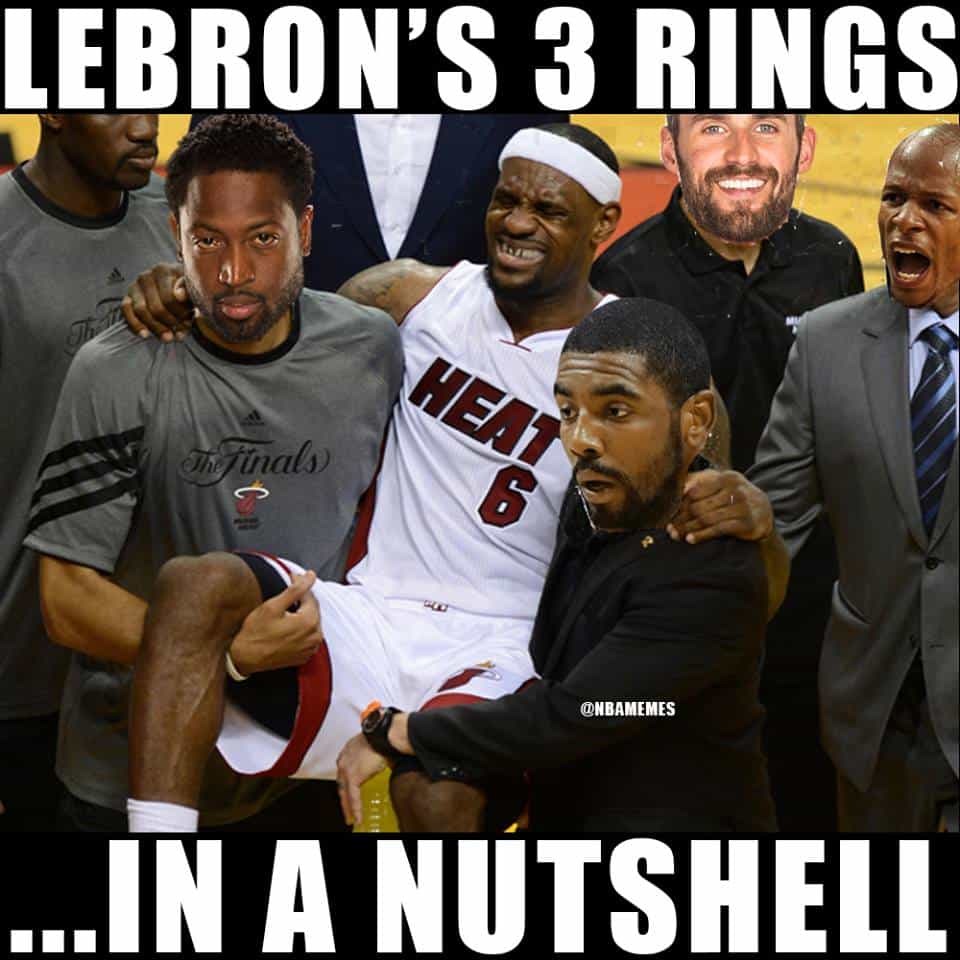 While no doubt a star during his time with the Miami Heat, many believe if it wasn’t for the team around him, he never would have gotten three rings. There is a theory that without the likes of Dwyane Wade and Chris Bosch they would have never made it through the NBA finals. 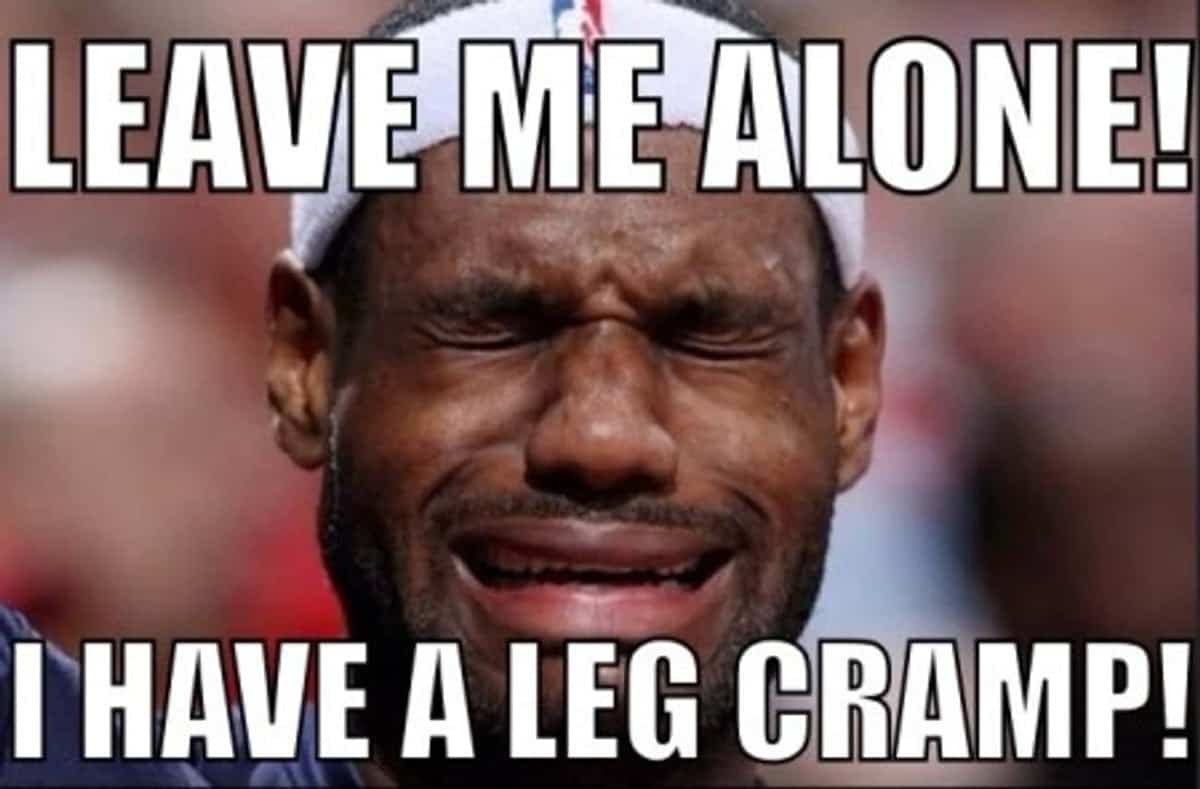 LeBron is known for the strange faces he pulls during games. This meme uses one of his weird facials to explain why he missed large portions of the final quarter in Miami’s Game 1 loss to the San Antonio Spurs in the 2014 playoffs. 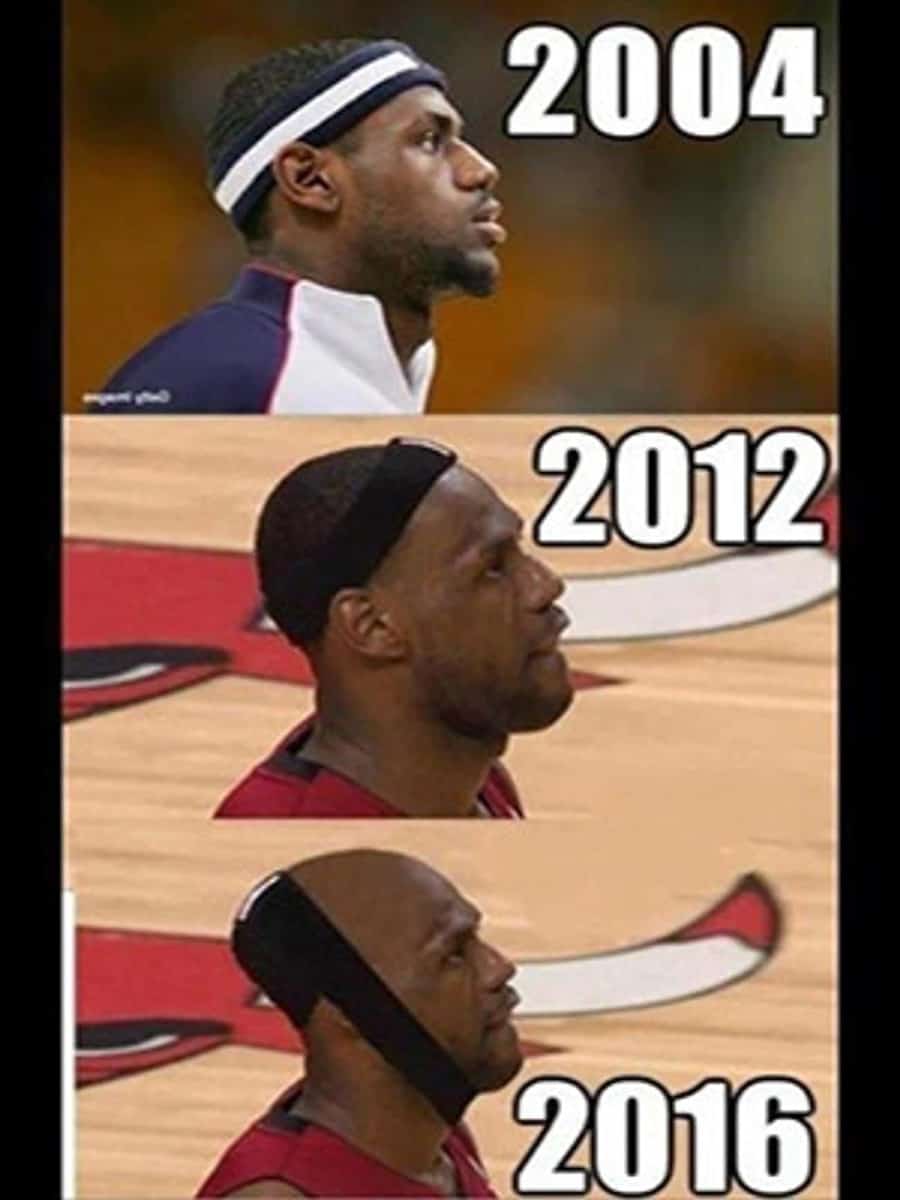 Unfortunately, LeBron started to go bald at an early age, and as you can see from the above meme, the internet went savage on him during his early years. 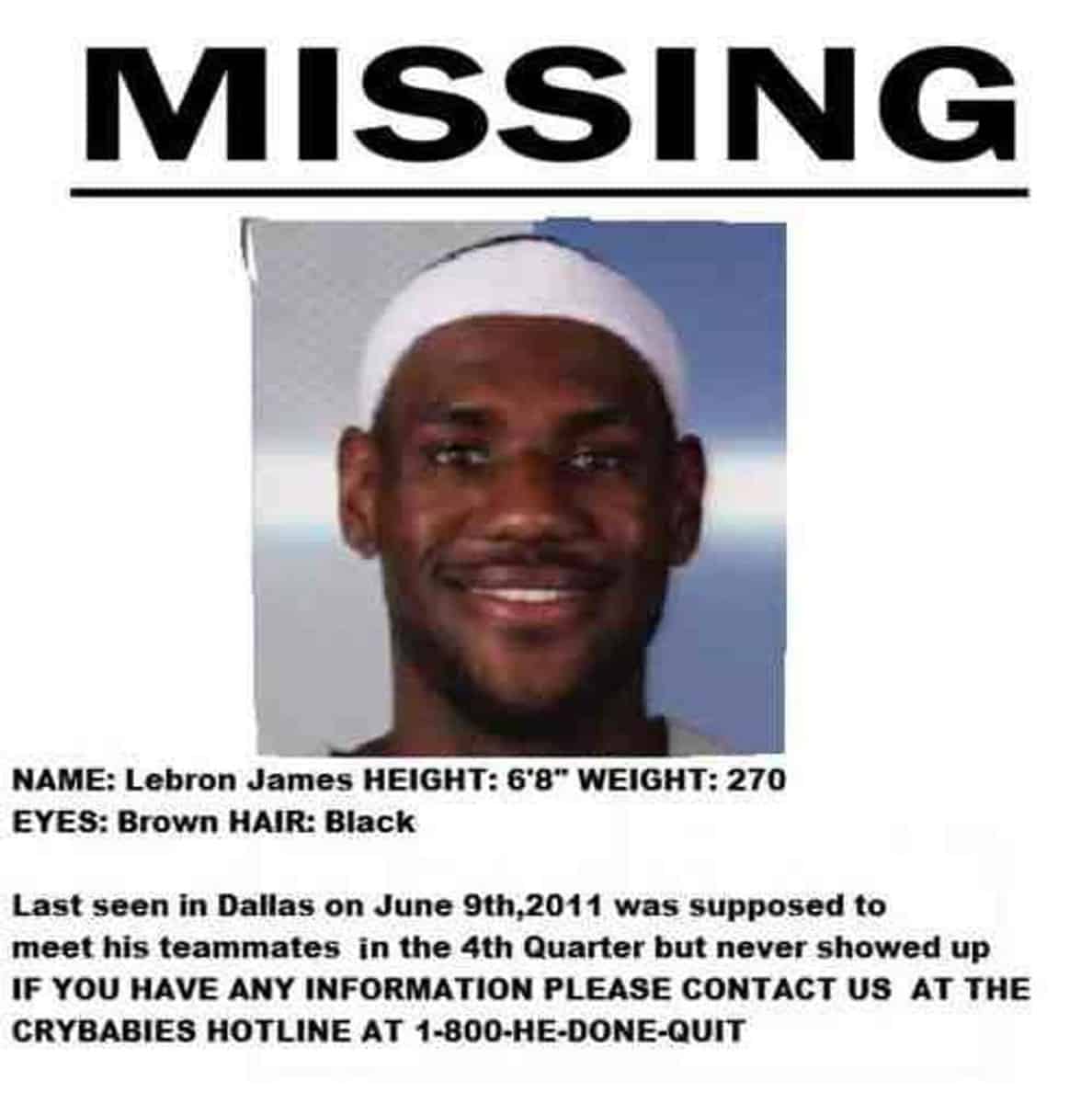 While slightly harsh, LeBron James did go missing during a few games in the final and copped a fair whack from fans for his vanishing act. Case in point: this hilarious ‘missing persons’ meme. 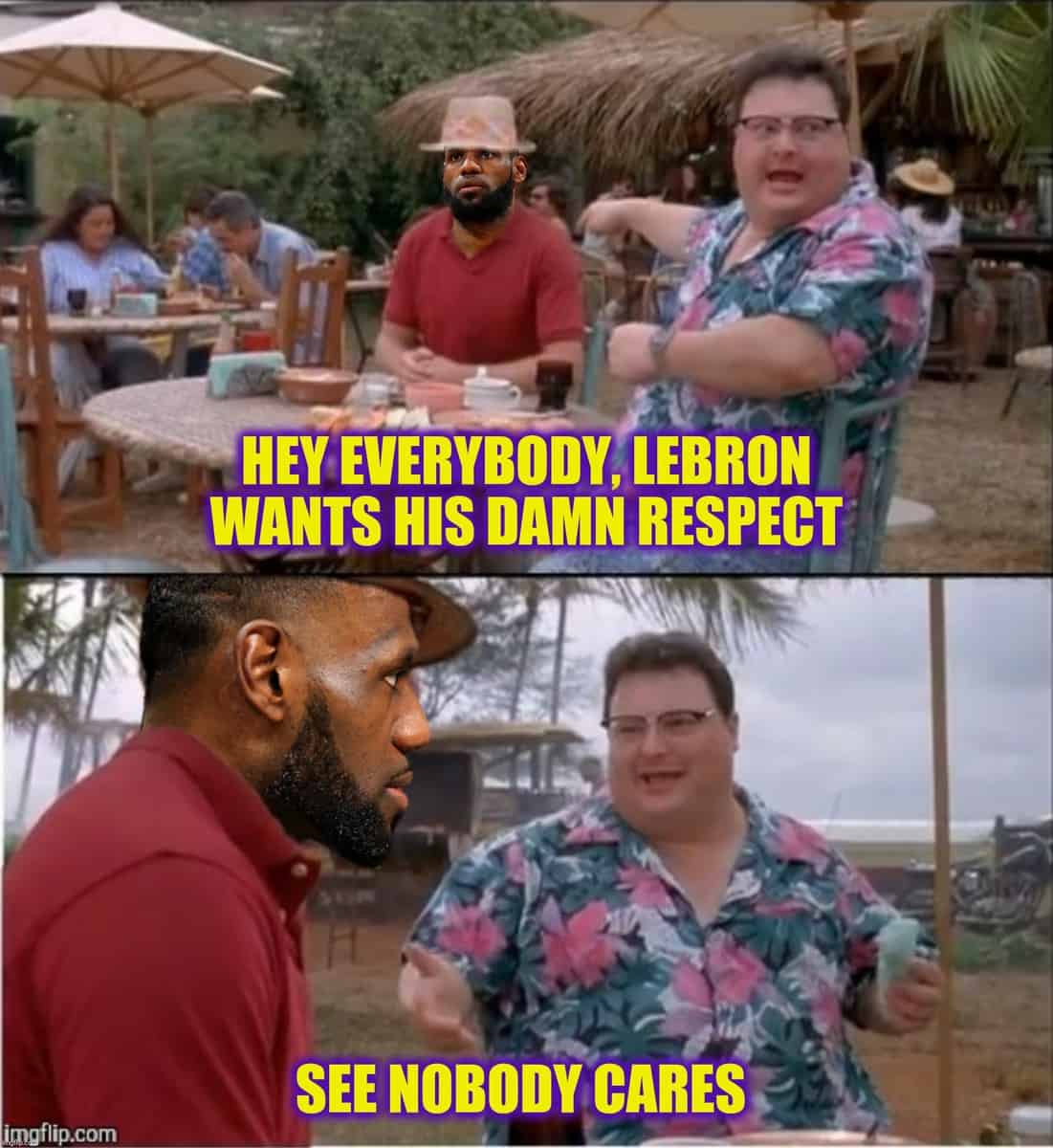 LeBron often believes he doesn’t get the respect he deserves, not that NBA fans care too much. Bonus points for this meme using Jurassic Park as a reference. 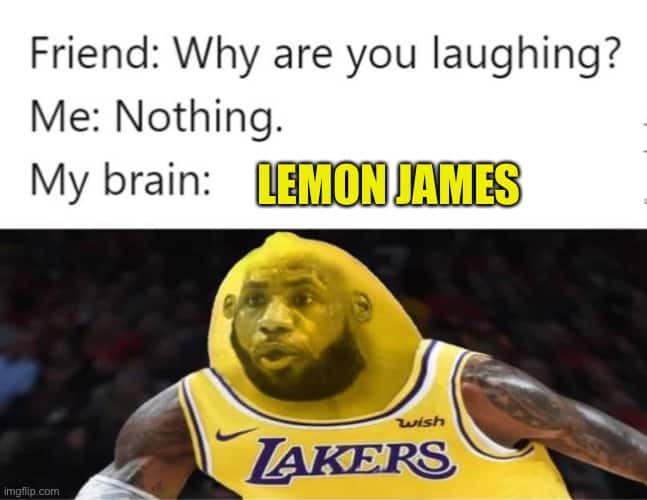 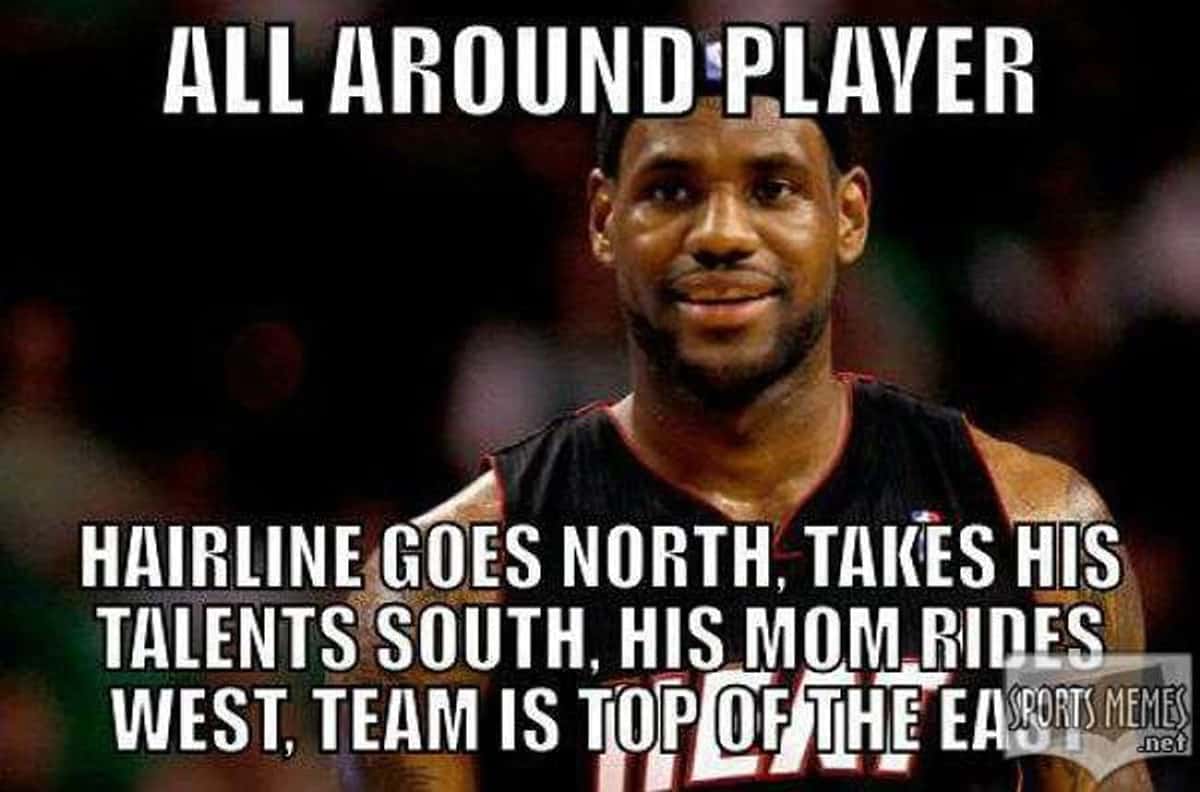 This one is another shot at LeBron’s hairline as well as his situation at the Miami Heat. It’s actually pretty funny and accurate for the time it was created. 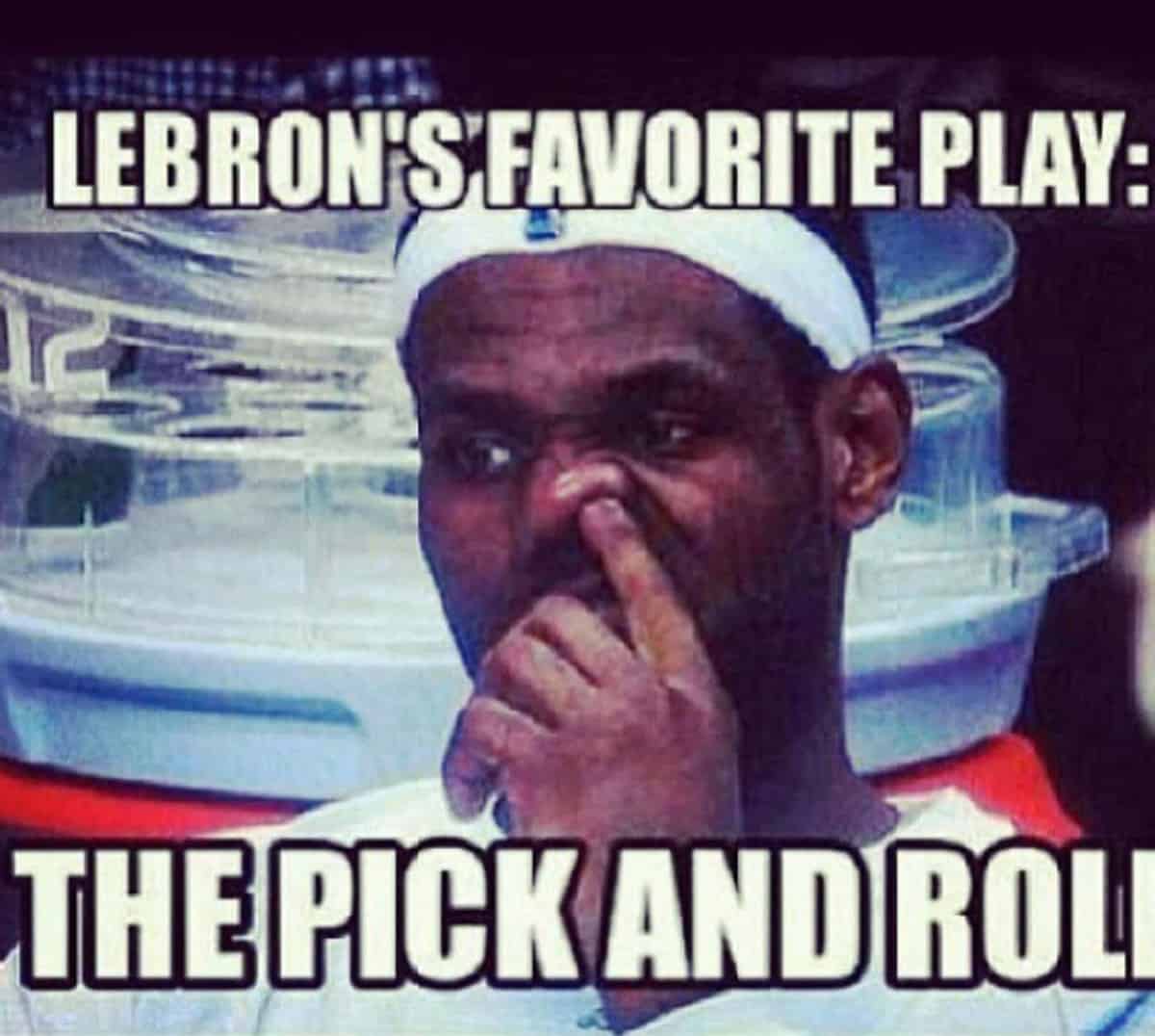 Now, this meme would be funny with any basketball player. LeBron was caught with his finger up his nose and some clever person came up with this hilarious basketball meme that fits perfectly.

9. You Take the Shot 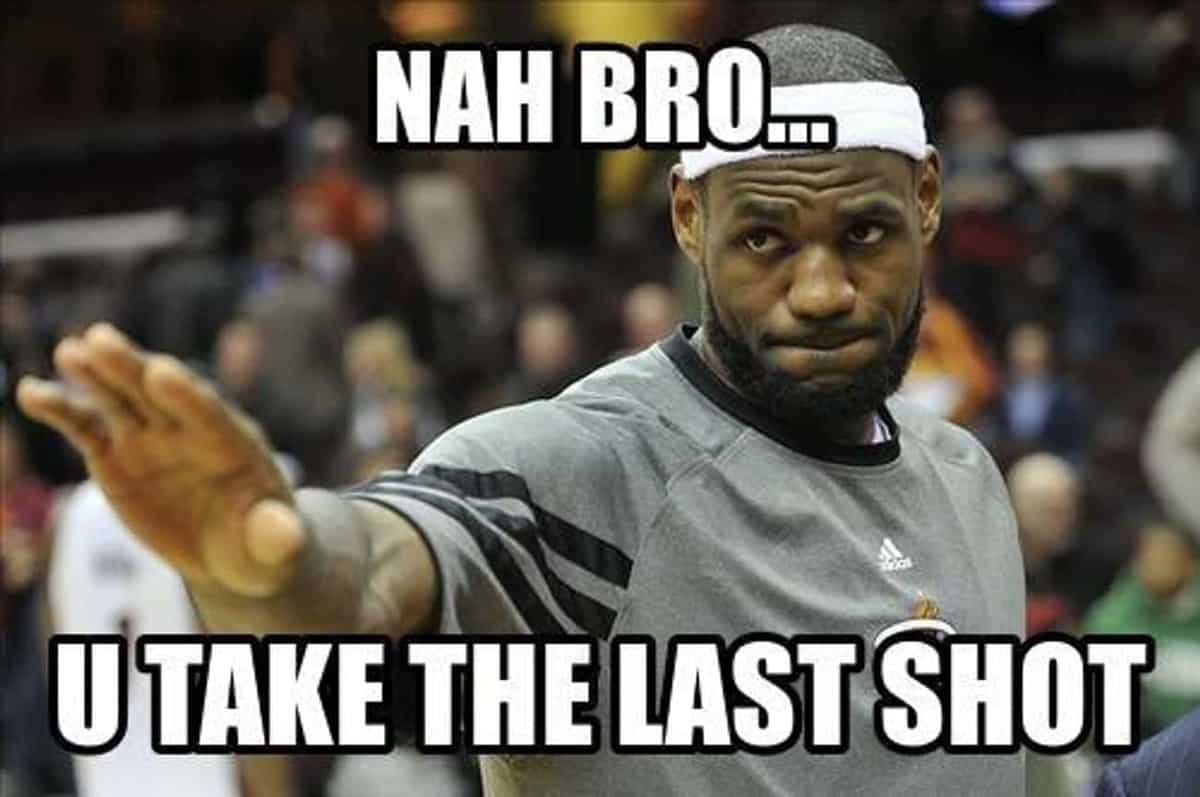 As mentioned, LeBron has been called out for not taking gaming-winning shots throughout his career. This was not just during his early years. In February of 2022, LeBron passed the ball in the final seconds against the Clippers to let a teammate go for glory instead of taking responsibility as a senior leader. 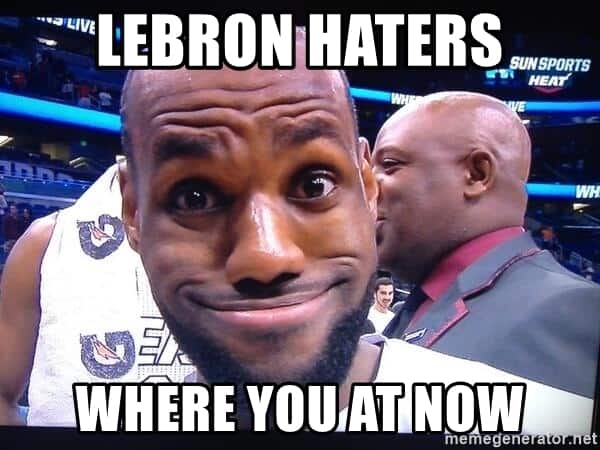 LeBron copped a lot of stick during his time at Cleveland Cavaliers but had the last laugh when they lifted the NBA Championship trophy in 2012. This is a meme to all those who doubted him. 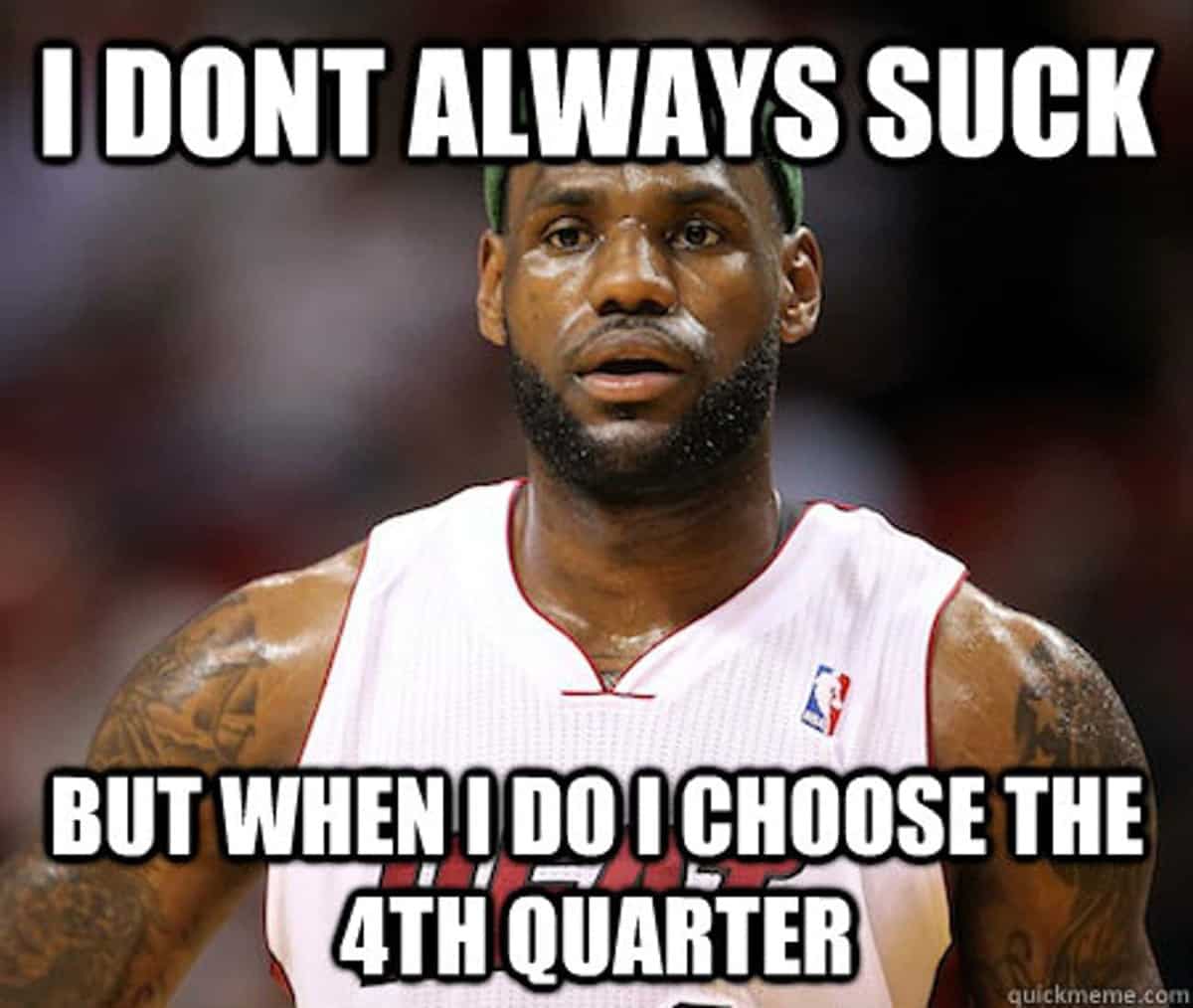 Here is another attack on poor old LeBron’s tendency to go missing. Some NBA fans just don’t have any feelings. 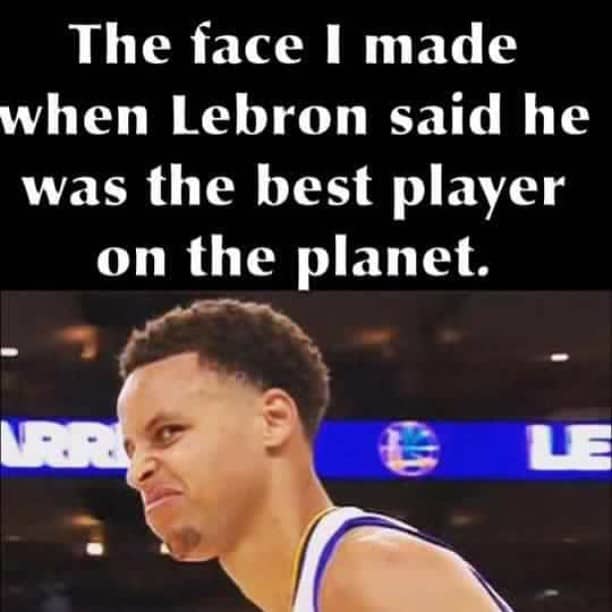 This meme started doing the rounds after the Cavilers lost to the Golden State Warriors in a sweep in 2017. While LeBron is arguably the greatest player going, a case can be made for the Warriors Steph Curry, who is an NBA star.

This one doesn’t need much of an explanation. 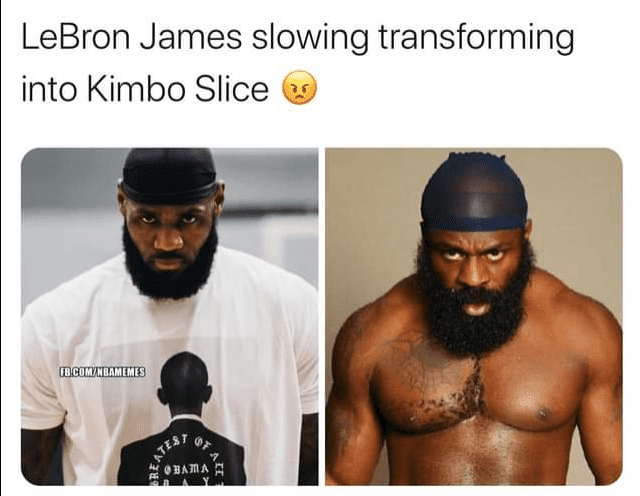 Is LeBron James gearing up for a shot at the UFC? 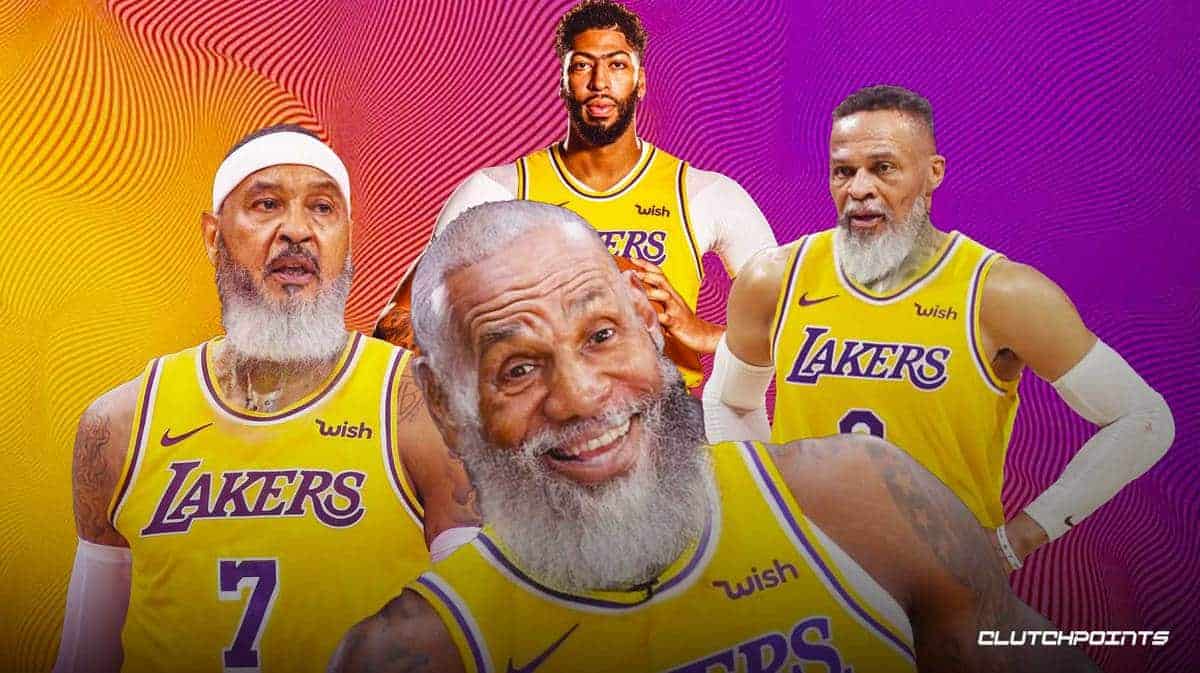 There are many who think that the Lakers are too old. Russell Westbrook is 32. LeBron James and Carmelo Anthony are both 37. Clutch Points looked at the age of the players and made this funny meme that isn’t too far from the truth.