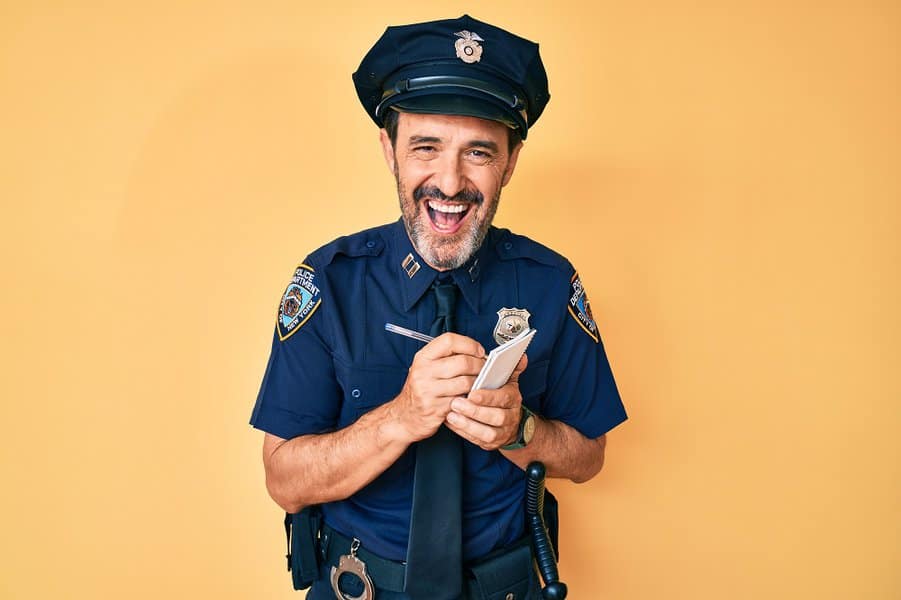 77 Police Jokes To Give You a Laugh

Ever since the movie Police Academy came out and showed police in a funny light, people realized not all cops are bad. While there are still many law enforcement officers involved with corruption and criminal activities, for the most part, the police are doing their best to make the streets a safer place. And they aren’t all mean and evil. Many cops are just like us, except they wear a badge and have a gun. People need to understand they are people too who enjoy a good time like the rest of us. One way that shows their humanity and humor is through police jokes.

That’s right, policemen and policewomen have a sense of humor. It might be hard to comprehend but coppers love a belly laugh like the rest of us. Pop culture is full of funny police shows and movies, while there are literally hundreds of hilarious police jokes floating around the internet.

To show that police can take a joke, we’ve collected some of the funniest cop jokes that will have you doubling over with laughter. These jokes aren’t offensive or derogative, but fun and light cracks that make fun of those who work for the police department. Expect a few jokes about donuts too, as there is nothing as funny as a stereotypical cop joke.

77 Police Jokes To Give You a Laugh 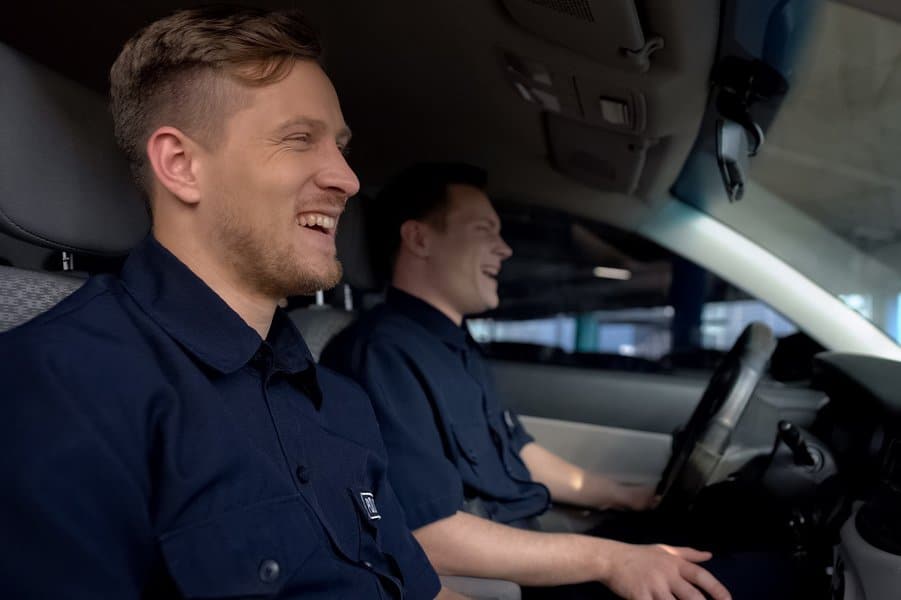 Driver: “You’re wrong, officer. It’s only my hat that makes me look that old.”

Someone broke into the police station and stole all the toilets. Police say they have nothing to go on.

3. My wife put on a sexy officer outfit and arrested me on suspicion of being good in bed.

After a short trial, I was found not guilty.

4. Why did the cat get fined by the police?

6. What do you call a female police officer playing guitar?

7. Why did the police officer smell so bad?

He was on duty.

He must have wanted a rematch because he has been chasing me for 45 minutes.”

9. Why did the peanut call the police?

10. Officer: “I notice your eyes are bloodshot. Have you been drinking?”

Driver: “I noticed your eyes are glazed over. Have you been eating donuts?”

11. What did the policeman say to the snowman?

12. A football player, an illegal immigrant, and a Muslim are in a car. Who’s driving?

13. Did you hear the celery got arrested?

They charged him with stalking.

Man: “Wait, I can explain everything.”

15. Who works with the grammar police?

16. Female police officer: “Anything you say can or will be held against you.”

17. A police officer comes across a man who is clearly under the influence. He says to the man, “We’re going to have to give you a drug test.”

Without hesitation, the man replies, “Cool, which drugs are we testing?”

18. What do a police officer and a DJ have in common?

They both tell drunk people to put their hands up.

19. What did the policeman say to his tummy?

You’re under a vest.

20. Traffic cop: “Do you have any idea how fast you were going?”

Driver: “Sorry officer but isn’t it your job to tell me?”

21. What sort of photo do you take at the police station?

Me: “You were bored and wanted some company?”

24. Did you hear that the energizer bunny was arrested?

He was charged with battery.

It was covering for the marker.

“For drinking.” replies the officer.

29. What do you call a policeman in bed?

30. What did the Missouri sheriff call the black teen who had been shot 12 times?

The worst case of suicide he had ever seen.

31. New York police officer: “You’re driving on the wrong side of the road.”

Police officer: (shouting) “Oii! It’s the rong soid of the roade ye was droivin down, innit?”

32. What does a frog use to keep away burglars?

33. Why did the coffee call the police?

34. I asked a rookie what he would do if he had to arrest his mother.

35. What did the policeman say to his dinner?

“Irish stew in the name of the law!”

36. Police officer: “So I’m writing you a ticket for driving alone in the carpool lane.”

Driver: “You’re going to feel really stupid when you look in my trunk.”

37. Judge: “I thought I said that I never wanted to see you in here again.”

Criminal: “That’s what I kept telling the arresting officer, but he wouldn’t listen.”

38. Did you hear about the thief who stole a lamp?

He got a very light sentence.

39. Why did the book join the police?

He wanted to go undercover!

40. An officer observes a woman standing in the middle of the street. He approaches her and asks, “Are you OK?”

The woman replies, “Yes, but how do I get to the hospital?”

41. Why did the robber wear blue gloves?

So he wouldn’t get caught red-handed!

To do his duty.

44. “Police are usually shocked that I have a record.”

“But I love their greatest hits!”

45. What do you call an officer with bugs?

46. When caught speeding, an airman on leave tried to talk an officer out of giving him a ticket. He asked, “Would it make a difference if I told you I’m in the Air Force?”

The police officer replied, “Yes, but only if you were driving an airplane.”

47. What do you call a blonde policeman?

48. There’s a man in the town who’s stealing the wheels of police cars.

The police are working tirelessly to catch him.

Perp: “With my parents.”

Police officer: “Where do your parents live?”

Police officer: “Where do you all live?”

Police officer: “Where is your house?”

Perp: “Next to my neighbor’s house.”

Police officer: “Where is your neighbor’s house.”

Perp: “If I tell you, would you believe me?”

50. Why did the officer give the ghost a ticket?

It didn’t have a haunting license.

Dishes the police. Open up!

52. Why did the police arrest the turkey?

53. Why did the cops go to the baseball game?

Because they heard someone was stealing a base.

54. “I got a call from the police station saying they want to interview me.

Funny… I don’t remember applying for a job there.”

55. Why are policemen such great volleyball players?

They know how to serve and protect.

56. Who’s the most famous detective in the garden?

57. What sound does a Nintendo police car make?

58. What are the four food groups of police officers?

59. On what show do police officers solve crimes committed by garden gnomes?

60. Why did the police raid the pet shop?

They were looking for the cat burglar.

61. What is it called when a cop puts a criminal in a police vehicle?

62. Why does a police officer go by numbers?

Because they never learned the alphabet.

Driver: “I wanted to make sure I beat you there, so there would still be donuts to buy.”

64. Why did the policewoman arrest her husband?

Because he stole her heart.

66. Why did the police officer arrest the skeleton?

They could see the joint in his hand.

“Policed to meet you.”

68. Man got pulled over and his vape was in his cup holder.

The officer said: “You know, the news says those things are killing people.”

The man chuckled and said: “They’re saying the same thing about you guys.”

69. An officer stops a man for speeding and notices he’s not wearing his required prescription glasses.

Officer: “I have to give you a ticket for not wearing your glasses.”

Driver: “Officer, I have contacts.”

Officer: “I don’t care who you know, you’re still getting a ticket.”

70. “So a police officer knocked on my door this morning. He asked, ‘Sir we believe your dog has been chasing a boy up the road on his bike.’

I replied, ‘Sorry officer, you must have the wrong house. My dog doesn’t own a bike.'”

71. What do you call a police officer in a sleeping bag?

Pig in a blanket.

72. Why couldn’t the police notify the family of the murdered baker?

He was a John Dough.

73. A police officer is driving down the freeway when he looks over and spots a granny knitting whilst balancing the steering wheel with her knees. He pulls alongside the granny, and angrily shouts “Pull over!”

The granny shouts back, “No, it’s a scarf”

Officer: “No, I am an undercover detective.”

Tourist: “So, why are you in uniform?”

Officer: “Today is my day off.”

75. A Los Angeles police officer sees a man exit a bar at closing time and get into his car. After observing some erratic driving, he pulls the man over. The officer asks the driver, “Where are you going at this time of night?”

The man replies, “I’m on my way to attend a lecture about alcohol abuse and its effects on the human body, as well as smoking and staying out late.”

The officer asks, “Who would give that kind of lecture at this time of night?”

76. “The police said they’d arrest me if I kept telling bad jokes.

I stopped because I was scared I would end up in punitentiary.”

77. A state trooper gives a woman a speeding ticket and she wants to know why he didn’t give her a warning first.

The officer says, “Ma’am, there are warnings posted up and down this highway. They say, ‘Speed Limit 65.’”

See more about - 68 Hilarious Physics Jokes Everyone Can Laugh At