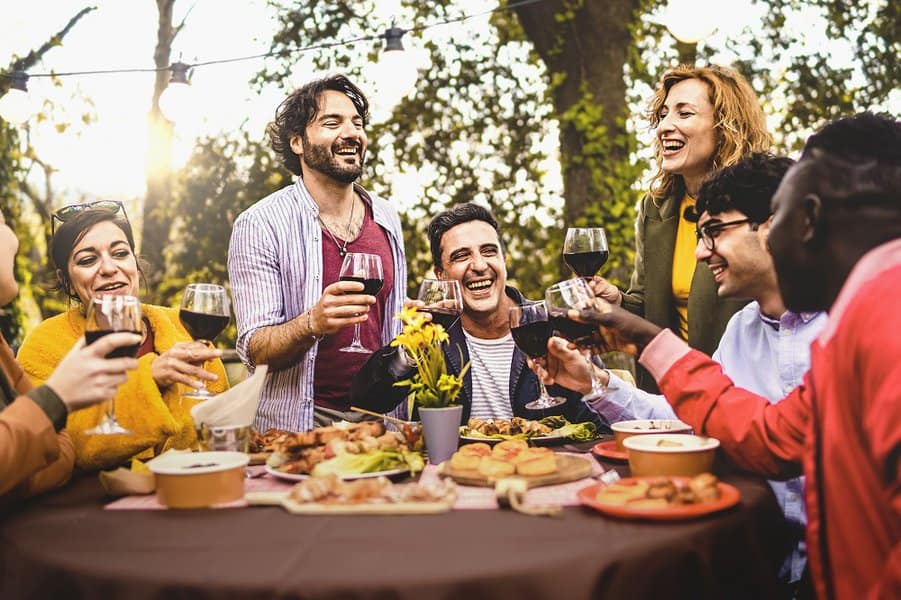 80 Hilarious Thanksgiving Jokes That Everyone Will Love

Thanksgiving is one holiday everyone looks forward to. Only a few weeks away, it’s a celebration of family and fun that has been a tradition harking all the way back to when the pilgrims arrived in the early 1600s. Thanksgiving dinner is usually a day of feasting featuring turkey, mashed potatoes, pumpkin pie, cocktails, and of course, Thanksgiving jokes.

Humor is always a great addition to any gathering, and Thanksgiving is no different. Funny Thanksgiving jokes included everything from funny kid’s jokes and riddles to Thanksgiving puns and dad jokes. Best of all, these jokes are all relatively clean so you can even get the children involved. They will also help break up any tension in the air that often comes with these types of family catch-ups over Thanksgiving day dinner.

So as the Thanksgiving day parade is playing on the television in the background, the food is on the table ready to be devoured, and the drinks are flowing, these Thanksgiving jokes will bring everyone together while providing plenty of laughs.

80 Hilarious Thanksgiving Jokes That Everyone Will Love 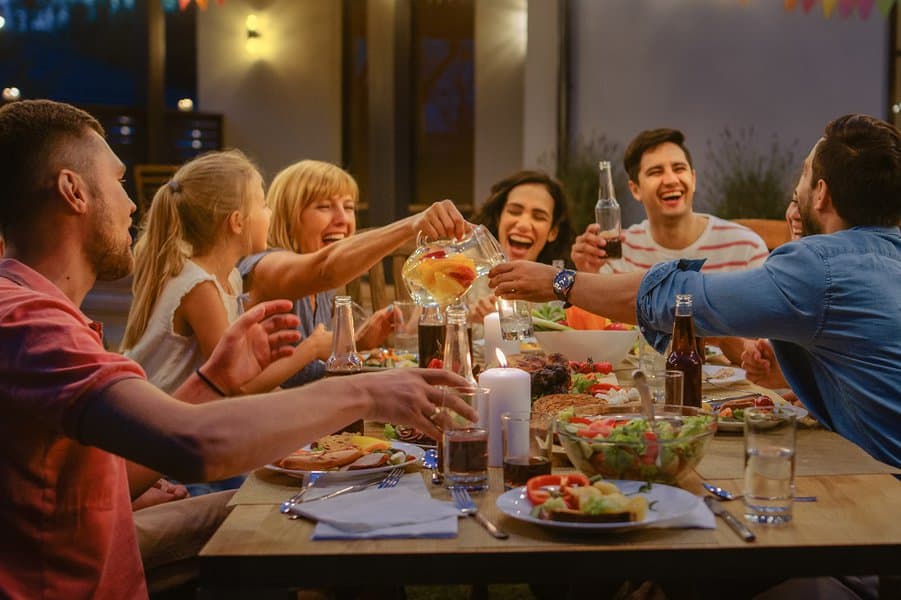 2. What do Thanksgiving and Halloween have in common?

One has gobblers, the other has goblins.

3. What did Dad say when he was asked to say grace?

4. What did the mother turkey say to her naughty children?

If your father could see you now he would turn over in his gravy.

5. Why did the farmer have to separate the chicken and the turkey?

6. Why did Mom’s turkey seasoning taste a little off last year?

She ran out of thyme.

9. What did the turkey say to the computer?

10. Why did they let the turkey join the band?

Because he had his own drumsticks.

11. What’s one thing that you’ll have in common with a teddy bear on Thanksgiving?

You’ll both be filled with stuffing.

12. What is a pumpkin’s favorite sport?

13. What happened to the turkey that got in a fight?

He got the stuffing knocked out of him!

14. What did the Pilgrim wear to dinner?

15. Why shouldn’t you sit next to a turkey at dinner?

Because he will gobble it up.

16. If you call a big turkey a gobbler, what do you call a small one?

17. What song should you listen to on Thanksgiving?

“All About That Baste.”

18. What kind of face does a pilgrim make when he’s in pain?

Serve him lots of pizza and ice cream.

20. What do you call a running turkey?

21. What’s blue and covered in feathers?

A turkey holding its breath.

22. Which side of the turkey has the most feathers?

23. How can you unlock a great Thanksgiving dinner experience ever?

By making sure to bring the tur-key.

24. What kind of ‘tude is appropriate at the family dinner?

25. Why did the turkey cross the road?

He wanted people to think he was a chicken.

26. What would you get if you crossed a turkey with a ghost?

He was already stuffed.

28. What’s something usually insulting, but not on Thanksgiving?

A family member or loved one giving you the bird.

29. What sound does a limping turkey make?

31. What did the leftover turkey say?

Make me a sandwich.

32. How did the salt and pepper welcome all the guests?

33. What makes every Thanksgiving meal extra-basic?

34. What type of language isn’t allowed at the dinner table?

35. What do you get if you divide the circumference of a pumpkin by its diameter?

36. What side dish do you bring for Thanksgiving dinner when you accidentally sat on the sweet potatoes?

37. Why were the beans accused of being jealous of the other side dishes?

They were so green.

38. Who should you invite to your Friendsgiving?

Your close group of Palgrims.

39. What do you call a holiday dinner without the parents?

41. If pilgrims traveled on the Mayflower, what do college students travel on?

43. Why did the turkey bring a microphone to dinner?

He was ready for a roast.

44. What Thanksgiving treat is the most popular at the kids’ table?

45. Why did the cranberries turn red?

Because they saw the turkey dressing.

46. Why was the Thanksgiving soup so expensive?

47. On Thanksgiving, what does Dad have in common with an exhausted baseball player?

They’re both likely to fall asleep between plates.

48. What smells the best at Thanksgiving?

49. Which holiday is Dracula’s favorite?

50. If Pilgrims were still alive, what would they be known for?

51. What happened when the Thanksgiving turkey got into a fight?

He got the stuffing knocked out of him.

52. What does Miley Cyrus eat on Thanksgiving?

Norma Lee I don’t eat this much cold turkey.

54. What’s the most musical part of a turkey?

55. What sound does a turkey’s phone make?

57. What happens when cranberries get sad?

They turn into blueberries.

58. What always comes at the end of Thanksgiving?

59. When is turkey bad for your health?

When you are the turkey.

60. The day after the holiday, what did the fridge say when it was asked, “Is everything alright over here?”

“No, everything is all leftover here.”

They use fowl language.

63. What did Han Solo say to Luke Skywalker on Thanksgiving?

“May the forks be with you.”

64. What makes Thanksgiving go as smoothly as possible?

When everyone has been given a designated (casse)role.

65. What would Michael Scott say while passing a plate of vegetables?

66. What is the difference between a chicken and a turkey?

…and pass the rolls.

68. What did the sweet potato say when it was asked if it was hungry?

69. What can you call your brother who falls asleep after dinner?

70. A man was looking at a frozen turkey in the grocery store for Thanksgiving Day, but couldn’t find one big enough for his family. He asked a stock boy, “Do these turkeys get any bigger?”

71. What does your uncle say when he’s had too much to drink?

“I’ve got my beer gobbles on.”

72. Who scared the cranberry?

73. What kind of music did the pilgrims listen to?

74. Why didn’t the pilgrim want to make the bread?

75. What is something that describes both political talk and filling up your plate of food on Thanksgiving day?

Because they never learned table manners.

78. Why are Pilgrims’ pants always falling down?

Their belt buckles are on their hats and shoes instead.

79. My family told me to stop telling Thanksgiving jokes…

…but I said I couldn’t quit cold turkey.

80. When are turkeys the most grateful?

The day after Thanksgiving.