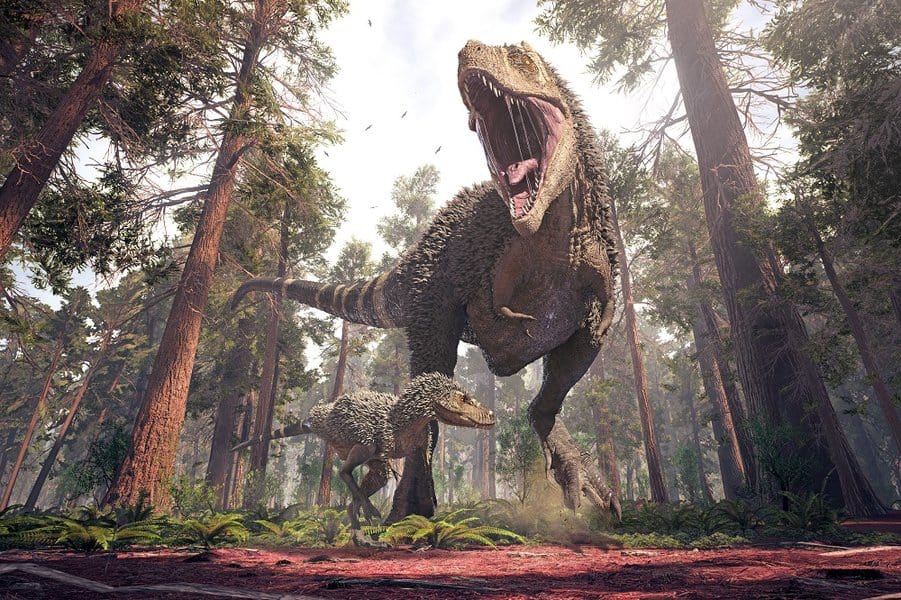 18 Most Dangerous Dinosaurs That Ever Walked the Earth

Millions and millions of years ago dinosaurs roamed the Earth and ruled over all the animals. They were a diverse group of large reptile-like creatures. Some of them were giants that towered over the other dinosaurs. Some of them were faster than lighting, while others could fly in the sky. Most of them were dangerous creatures that could devour their prey in a second. Several of the most dangerous dinosaurs walked the Earth during this time, instilling fear in every animal and creature they came across.

Dangerous dinosaurs fall into three categories. First, there are vicious carnivore predators that used their size, razor-sharp teeth, and sickle-shaped talons to hunt their prey. Next, there were the monstrous herbivore dinosaurs that were gentle until they had to defend themselves with their long, powerful tails. Finally, you had the small but ferocious dinosaurs that were dangerous due to their high intelligence.

Nowadays, dinosaurs are almost like mythical creatures whose fossils are prized possessions, although dinosaurs did make a roaring comeback in the 90s thanks to the classic Jurassic Park franchise. The series built a reputation for featuring the scariest and most dangerous dinosaurs to walk the Earth, which you can find out more about below. 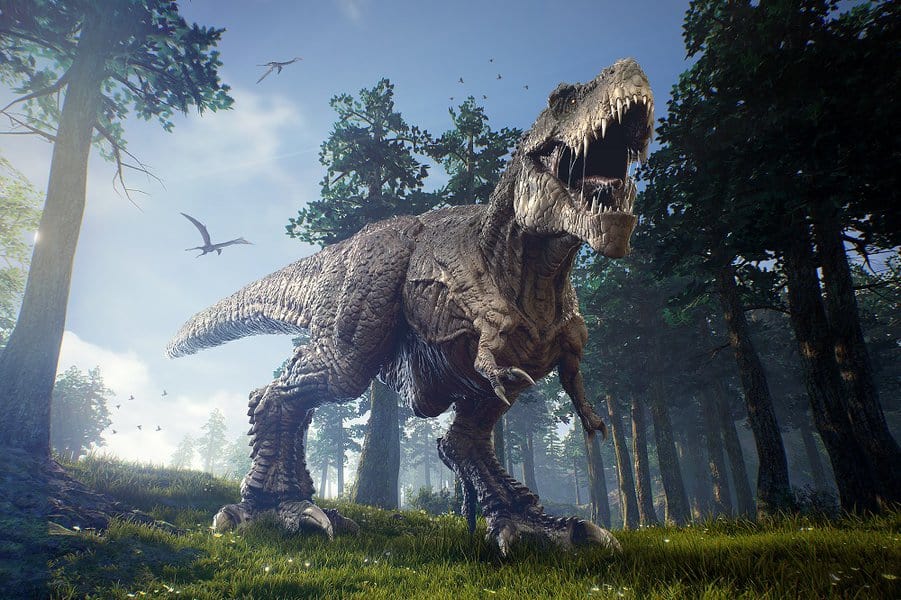 66 million years ago, the tyrant lizard king ruled over the entire planet. Undoubtedly the Tyrannosaurus Rex was the most dangerous dinosaur to walk the Earth. It lived in North America but dominated the world.

Also known as the T-Rex, the Theropoda was a highly intelligent apex predator that enjoyed hunting its prey and devouring it. The monstrous carnivore had toxic saliva that would slow a target down if it got away after one bite. The lethal T-Rex was the most unstoppable and dangerous dinosaur to walk the Earth. 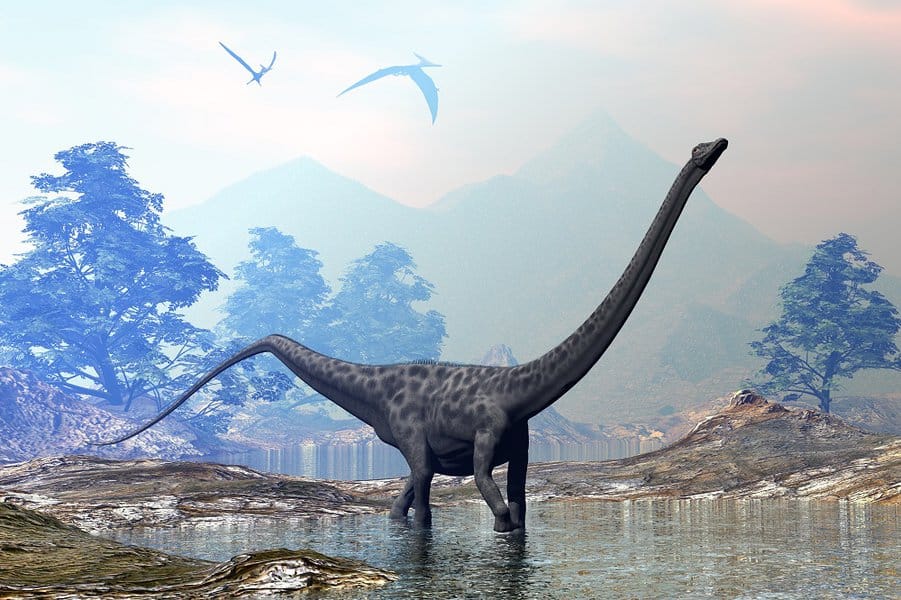 The Diplodocus was a gentle giant that wandered the planet 154 million years ago in the mid-western United States. The giant herbivore is one of the most recognizable dinosaurs with its elongated neck, big frame, and long lethal tail. However, this massive quadrupedal wasn’t some pushover. 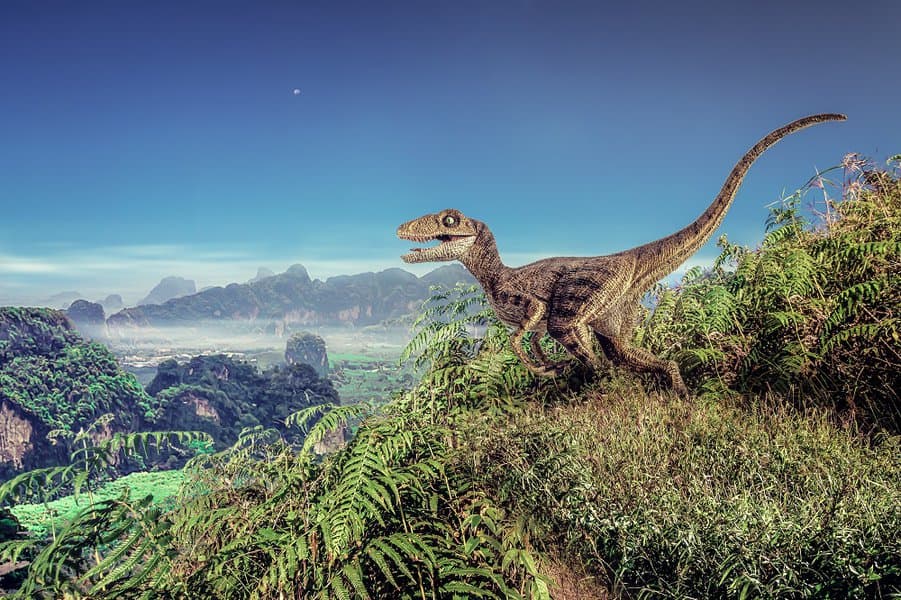 Despite its small size, the Velociraptor was one of the deadliest carnivores on the planet. The vicious dinosaur lived 75 million years ago during the Late Cretaceous period. With its claws, long tail, and feathers, the dangerous dinosaur looked more like a bird than a lizard.

The bipedal creature had a distinctive sickle-shaped claw on each back foot. It often traveled in packs and used its deadly claws for hunting its prey. Primarily found in China and Mongolia, the Velociraptor showed traits of a predator and scavenger. The already infamous dinosaurs became a household name after stalking their prey in Jurassic Park. 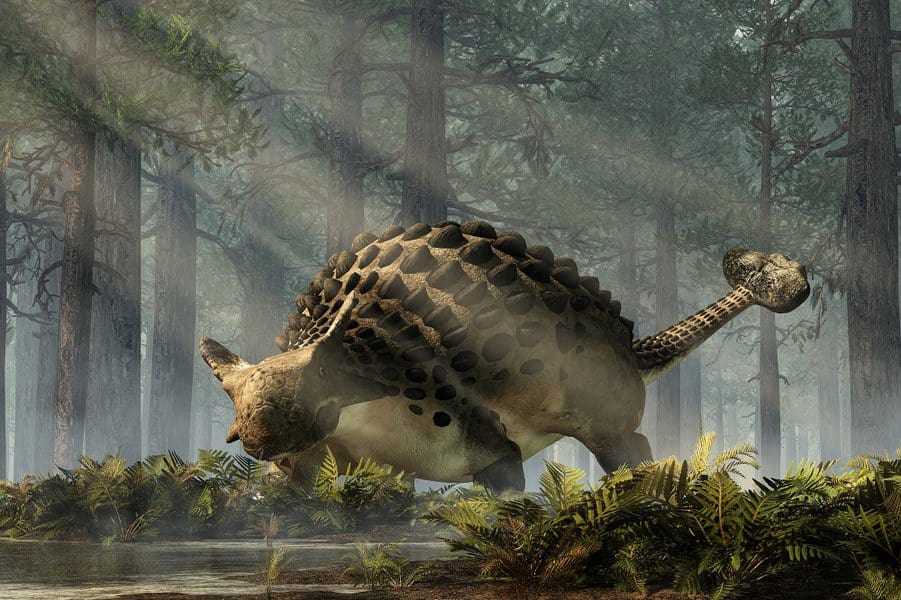 Velociraptors and the T-Rex learned quickly never to underestimate a vegetarian. 68 million years ago, the hefty herbivore Ankylosaurus enjoyed eating plants in the Western part of North America. It never looked for trouble but was always ready for a fight.

With its giant frame and leaf-shaped teeth, the armored Ankylosaurus boasted a long tail with a large club at the end. It could crush the skull of a T-Rex with one swing of its tail. Paleontologists believe the Ankylosaurs were one of the last non-avian dinosaurs to go extinct. 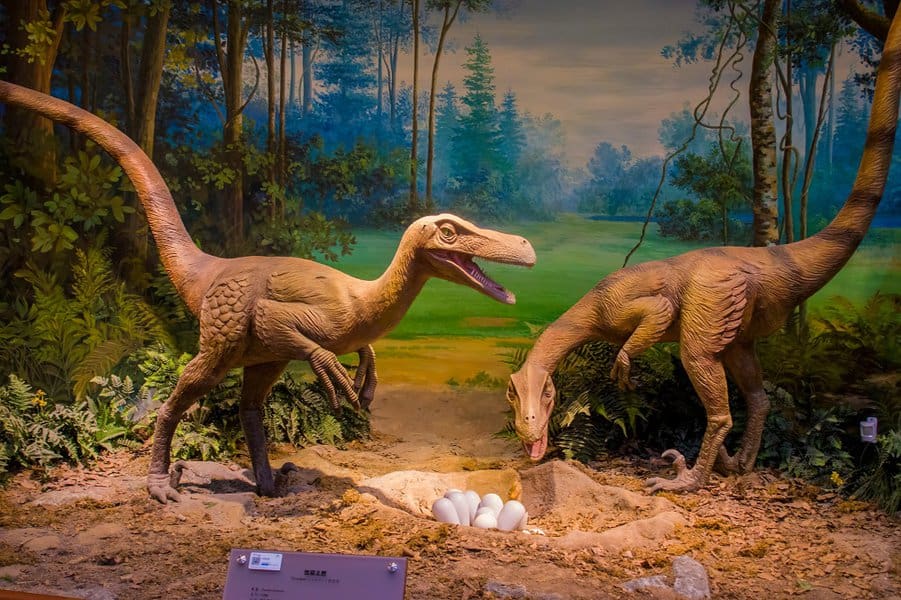 Living in present-day Montana and Alberta, the Troodon was bird-like with a small size. It was also likely an omnivore that enjoyed devouring animals and snacking on plants. Despite its small size, it was a highly intelligent dinosaur that could see at night thanks to its big eyes.

They often traveled in packs and would use their brains to overcome brawn. While most dinosaurs rely on speed or strength, the Troodon only needed its superior brain to hunt its prey and defeat its rivals. 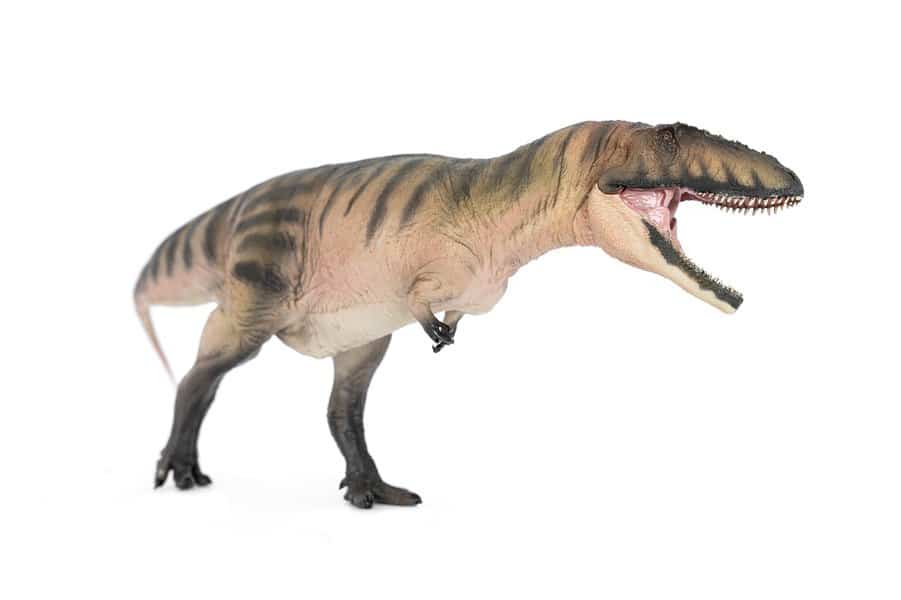 Standing 13 feet tall, the Carcharodontosaurus was one of the biggest dinosaurs in history. The monstrous carnivore roamed the planet 100 million years ago in what is now modern-day North Africa. Compared to other dinosaurs, it had a small brain and short arms. However, it was faster than a T-Rex and had long, razor-sharp teeth that could slice through its prey.

As one of the most powerful dinosaurs, it could easily take down its prey and give it a vicious beating. Few dinosaurs could match its combination of speed, power, and viciousness. 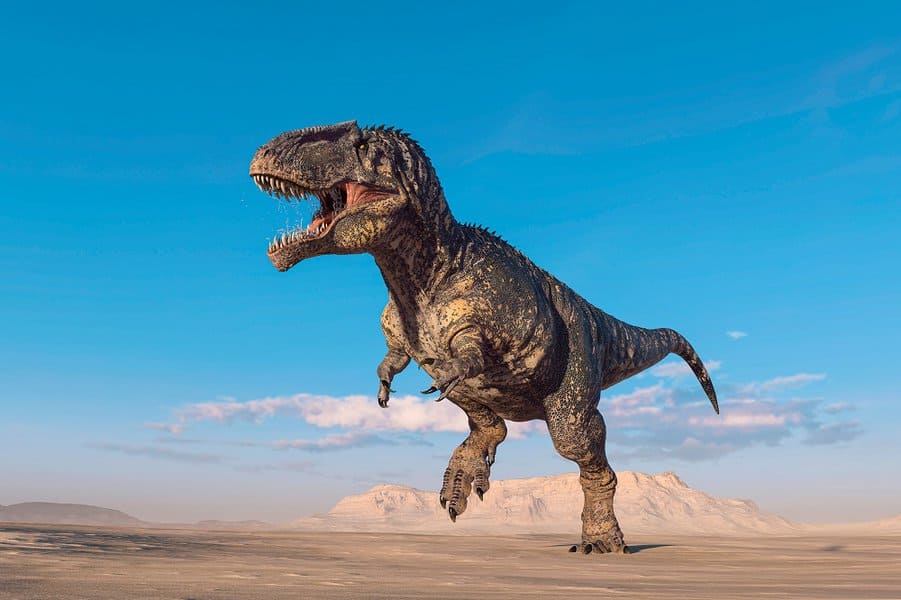 The combination of its speed, size, and power made it one of the most feared theropods. It terrorized the other dinosaurs and animals 99 million years ago in South America, particularly in Argentina. 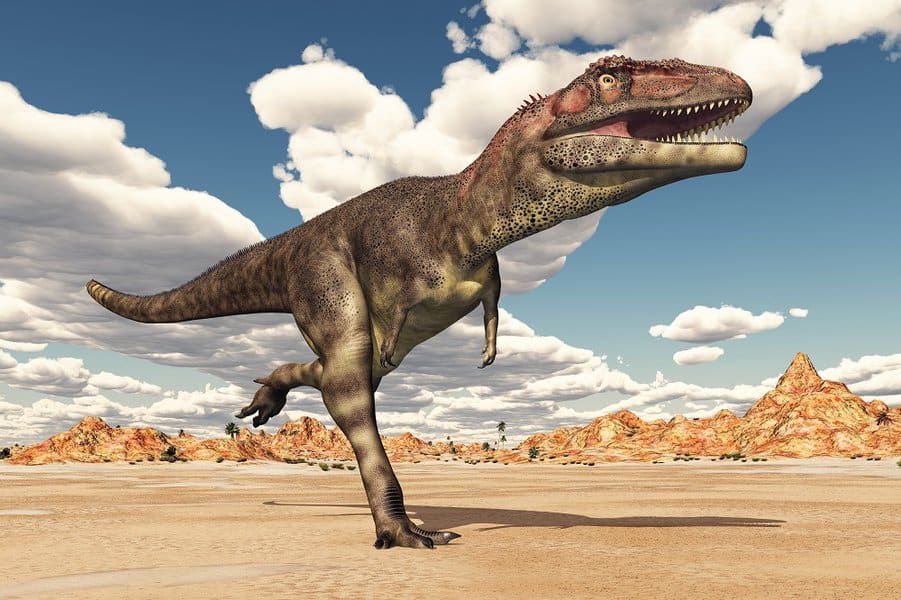 The Mapusaurus struck fear into the hearts of all dinosaurs when it roamed the Earth some 99 years ago. The terrifying Carnosaurus was roughly 30 feet long and hunted in packs.

The lethal predator was incredibly powerful and took out its prey with its knife-life teeth. The callous carnivore mostly lived in modern-day Argentina and struck fear in every type of dinosaur it encountered. 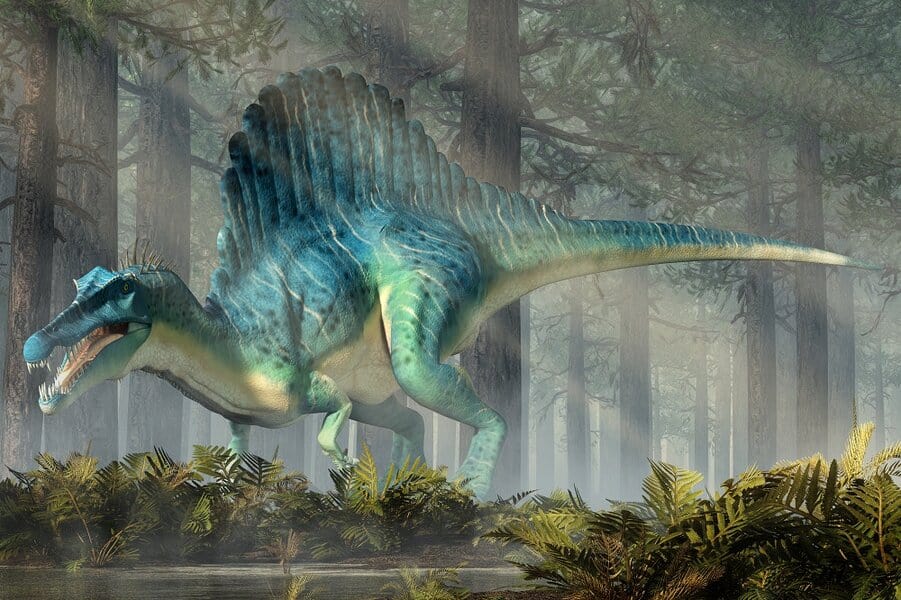 The giant Spinosaurus wasn’t just a dangerous dinosaur hunting its prey on land. The vicious carnivore enjoyed going for swims and hunting down delicious fish. With its massive crocodile jaw and claws, the Spinosaurus was one of the only dinosaurs that spent part of its time swimming in the water.

The enormous creature had a sail-like spine with its large vertebrate. Plus, its short legs made it easier to float, with the tail acting as a propeller. The dangerous dinosaur lived roughly 99 million years ago in what is now North Africa. 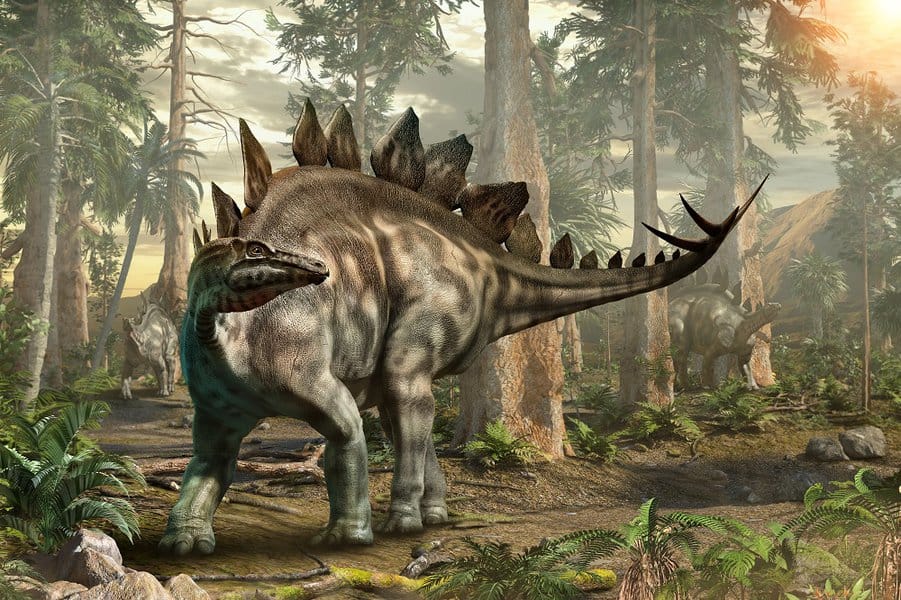 Found in Portugal and the United States, the Stegosaurus lived 155 million years ago. The massive quadruped had two small front legs and large back legs. The armored herbivore was one of the largest dinosaurs, but it also had one of the smallest brains. Plus, it had a long spiked tail that could easily destroy the bigger dinosaurs.

Don’t let the plant-eating dinosaur fool you though; it was always ready to defend itself against predators, using its size and lethal tail to win the battle. 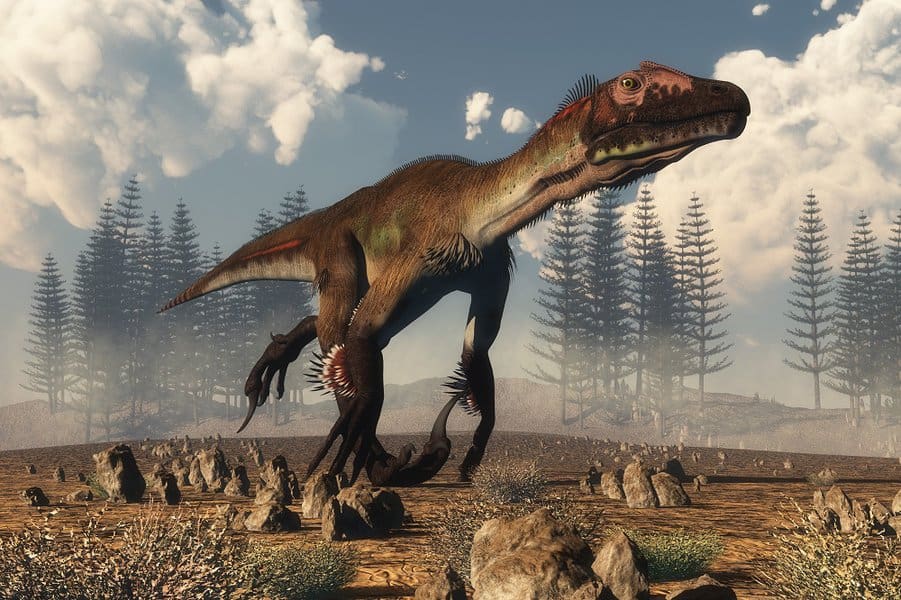 The deadly Utahraptor was the only bipedal carnivore that caused all the other dinosaurs to have nightmares. The notorious feathered Dromaeosaurid Theropod dinosaur had bird-like features with the weight of a grizzly bear.

It lived during the early Cretaceous period, roughly 139 million years ago. With its deadly combination of speed, sharp teeth, and lethal claws, the Utahraptor was one the most dangerous dinosaurs to wander the Earth. 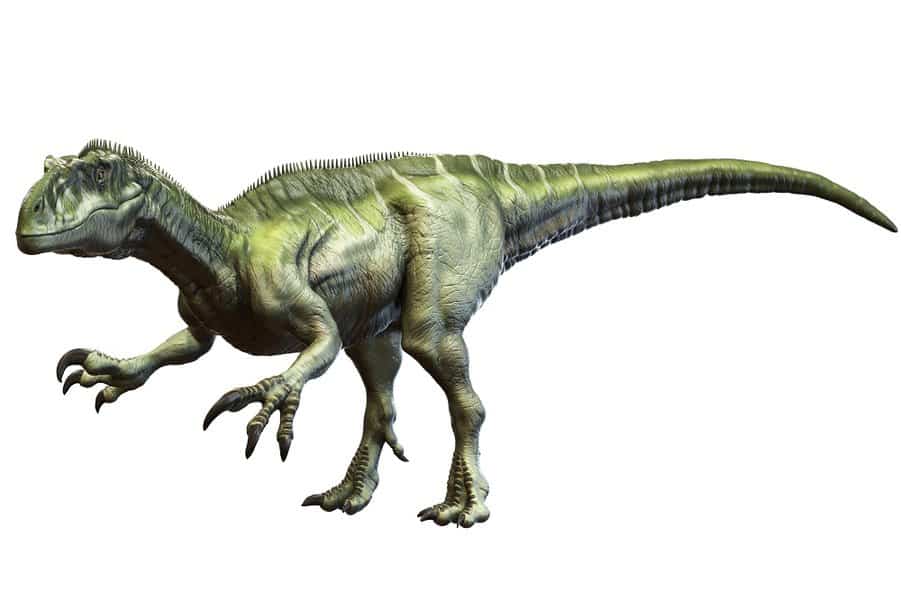 The Megaraptor was another of the most dangerous dinosaurs of all time. They were large carnivores with a vicious streak that could take down the biggest dinosaurs. They were giant, strong, and fast with a special weapon to boot.

The gigantic Megaraphtor had an impressive sickle-shaped claw on its hand. It roamed the Earth, hunting its prey 91 million years ago in Argentina. 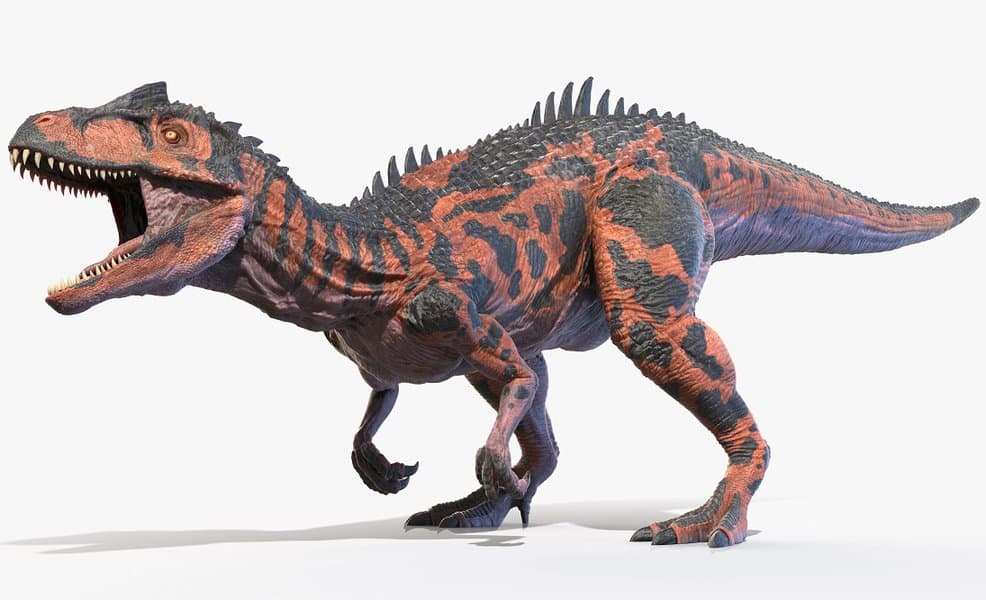 During the Late Jurassic period, the feared Allosaurus was at the top of the food chain. It wasn’t the most intelligent dinosaur but undoubtedly the scariest.

Found mainly in North America and Portugal, it had large serrated teeth that could cut through metal. The vicious carnivore lived roughly 155 million years ago and possibly preyed on herbivores. Paleontologists also believe the mighty dinosaur hunted other predators. 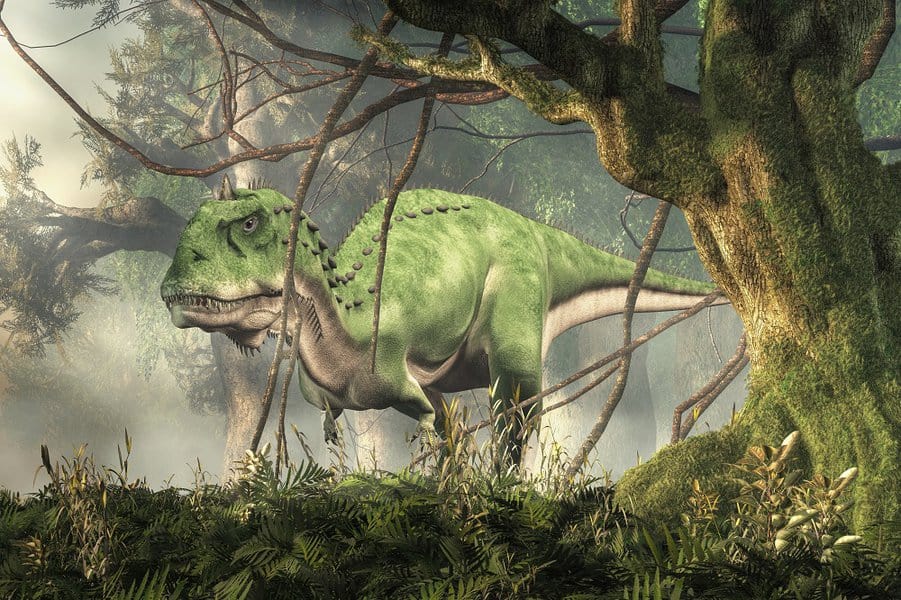 Found in Madagascar, the Majungasurus lived during the end of the Cretaceous period 70 million years ago. It was easily one of the deadliest and toughest bipedal theropods in the world. In fact, it was one of the last non-avian dinosaurs that went extinct during the Cretaceous-Paleogene extinction event.

The dangerous predator had short arms but massive legs and a muscular body. It was easily recognizable due to its broad skull, long stout, and single horn. Scientists speculate that it would bite and hold its prey during an attack. 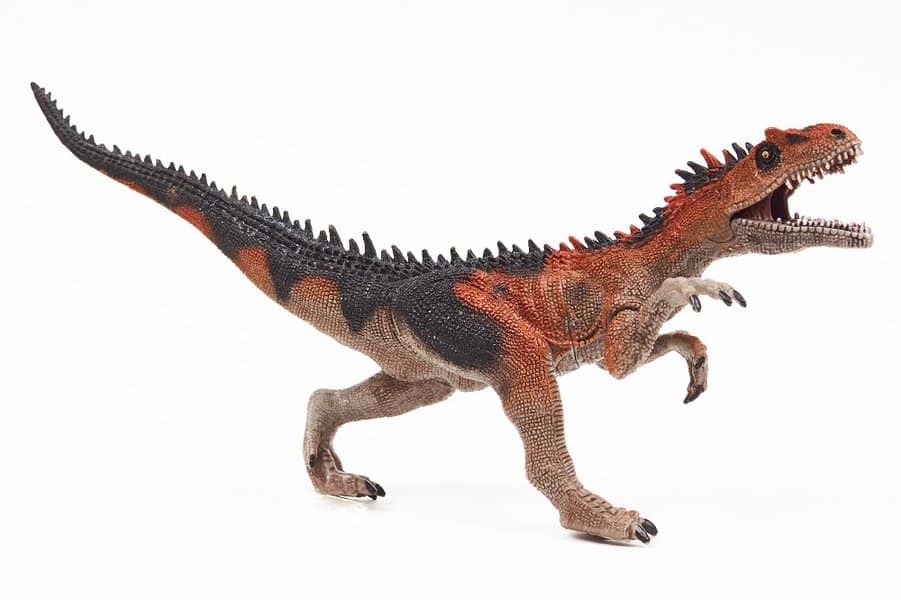 150 million years ago, the deadly Saurophaganax was the king of the apex predators. It feared no dinosaurs, including the T-Rex or Utahraptor. Also known as the lord of the lizard eaters, the killer carnivore would use its razor-sharp meat choppers to feast on a large armored stegosaurus.

It was an enormous land dinosaur that mainly lived in North America, notably in Oklahoma. It often competed with other predators during the Late Jurassic period for its prey. 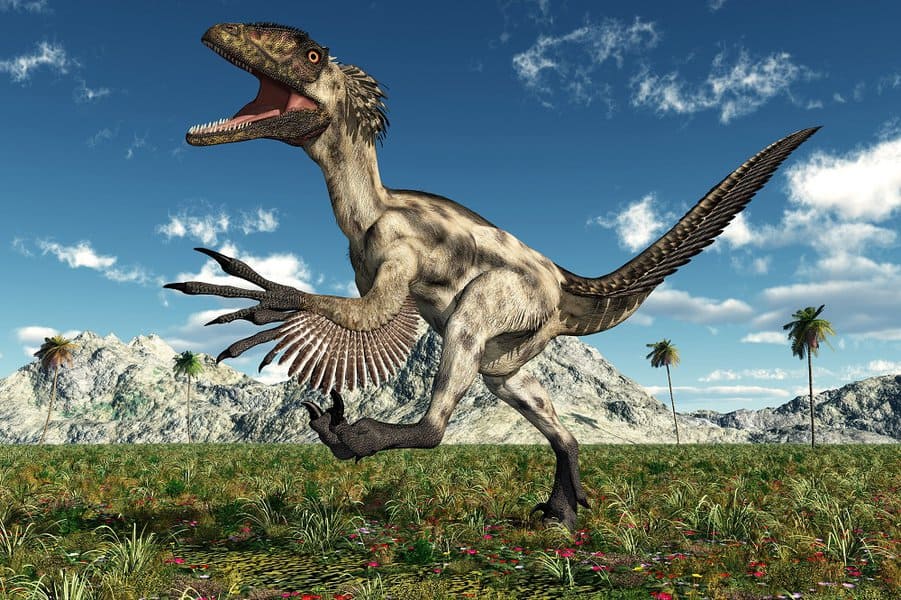 For years, Paleontologists assumed that all dinosaurs were giant reptiles that were slow moving. Well, that all changed with the discovery of the Deinonychus. The lighting fast carnivore could lock its tail while running due to its interlocking vertebrae.

Found mainly in the western United States, the deadly dinosaur used its speed and sharp teeth for hunting down its victims. It roamed the planet 115 million years ago and was always ready to pull out its secret weapon, the “terrible claw.” The dangerous dinosaur had a unique sickle-shaped claw on the second toe that could cause massive amounts of damage to its prey or rivals. 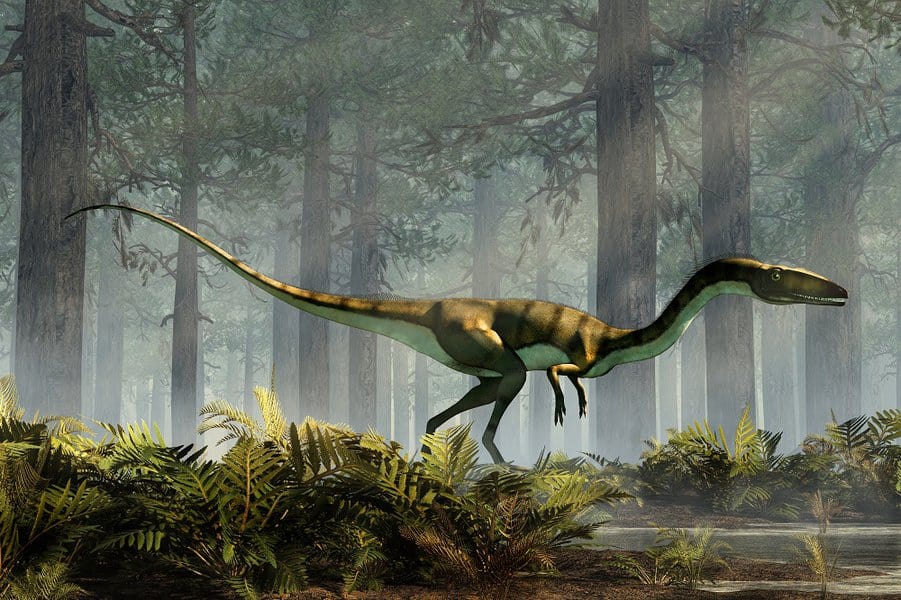 The small but violent Coelophysis terrorized the planet 216 million years ago in the present-day southwestern United States. The highly intelligent carnivore used its brain to outsmart the much larger predators.

They hunted in well-planned groups and could hide in small spaces, surprising their victims. With their combination of speed, intelligence, and knife-like teeth, they could take down any dinosaur regardless of its size. 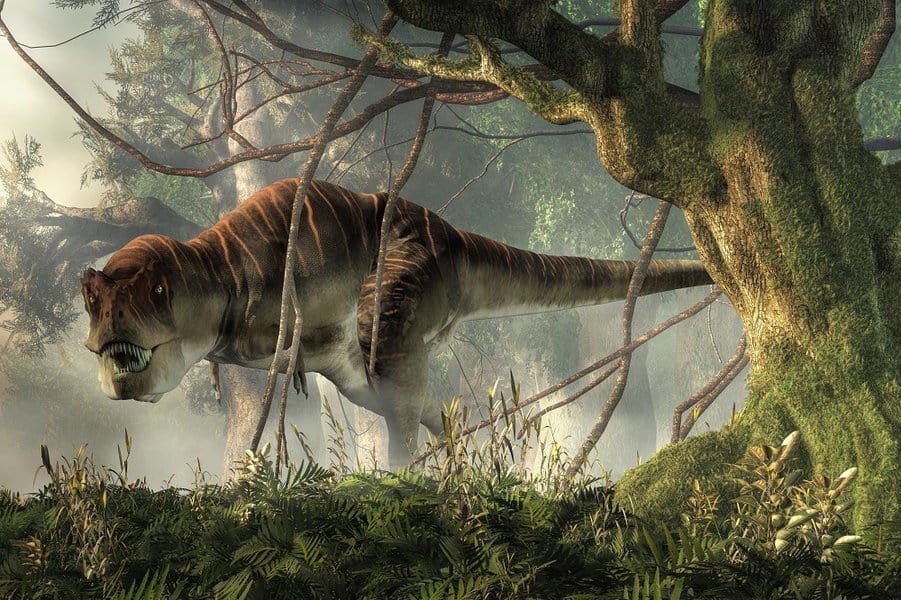 Found chiefly in Asia, the Tarbosaurus was one the deadliest and most dangerous carnivores to set foot on the planet 70 million years ago. It was quicker than most large dinosaurs and could outrun most giant predators. The bipedal Tarbosaurs could easily defeat a Veoliraptor in a one-on-one battle.

They combined size, power, speed, and intelligence to be the most dominant dinosaurs during the Late Cretaceous period. Tarbosaurus usually hunted at night and had a unique jaw that allowed it to carry its prey while running.