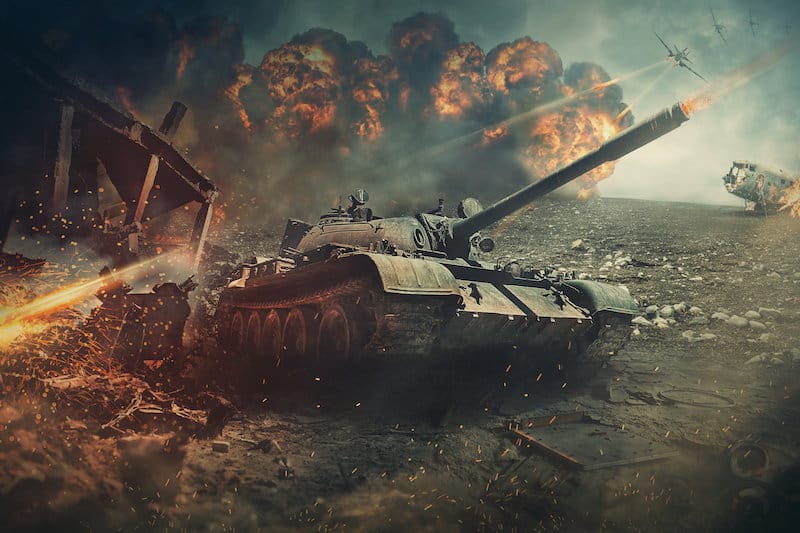 10 Photos of People Before and After War

War is a horrible thing. As the recent conflict in the Ukraine has demonstrated, nothing good comes from war. Before that, the First World War, Second World War, Vietnam War, Korean War, and Cold War have all been major conflicts throughout the world. While soldiers are prepared for battle, the horrors of war are still something many of them don’t expect. And it’s not just soldiers who are affected. There are innocent civilians who are impacted by the death and destruction that war brings. Nobody experiences war and remains unchanged. This is often seen in photos of people before and after the war.

They say a picture tells a thousand words, and when it comes to people who have been through war, that phrase rings true. Throughout the decades there have been many portraits and photos taken of people before and after war. These images highlight how the tragedy of war can be seen on people’s faces.

We’ve gathered together some of these photos that show how people changed during the course of different wars. Be warned, these photos are quite confronting and really make you think about how lucky we are to be in a country free from war.

10 Photos of People Before and After War 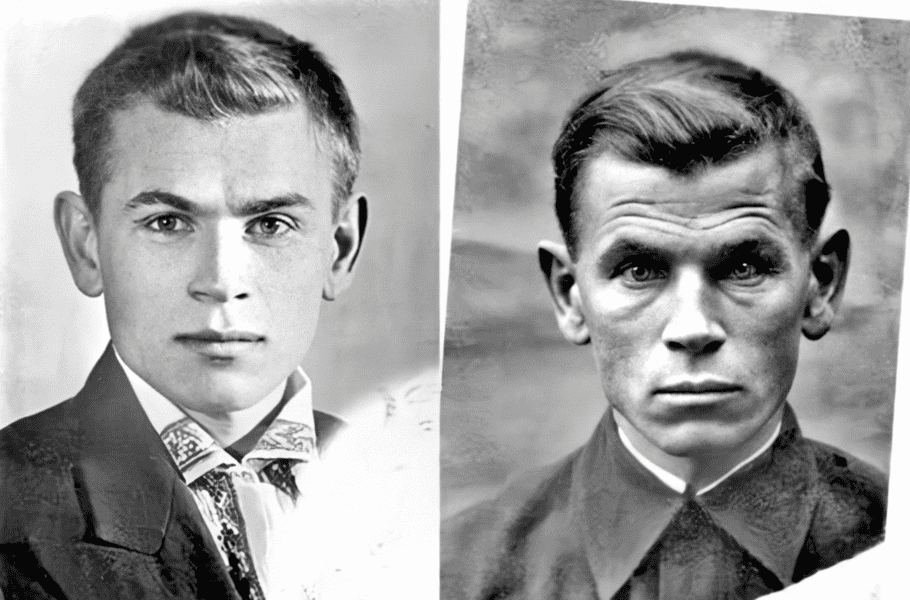 These pictures taken of Evgeny Stepanovich Kobytev were snapped four years apart. The first was taken just before the artist was forced to join the army after the Soviet Union was attacked by Germany. A passionate painter, Kobytev graduated from the Kyiv State Art Institute in Ukraine in 1941 and was ready to start his new creative journey, but life had a different path for him.

Kobytev signed up for the Red Army and was part of the regiment that defended the small town of Pripyat, which lies between Kyiv and Kharkiv. During the battle, he was wounded and captured by the Germans. Kobytev ended up being sent to the concentration camp known as “Khorol pit,” a notorious POW camp where around 90,000 people perished.

Somehow Kobytex escaped and linked back up with the Soviet army and was involved in many more skirmishes before his time in the armed forces was over. As you can see from these two photos, Kobytev was a joyous young man with a bright future before the war turned him into someone who saw too much violence and death at a young age. 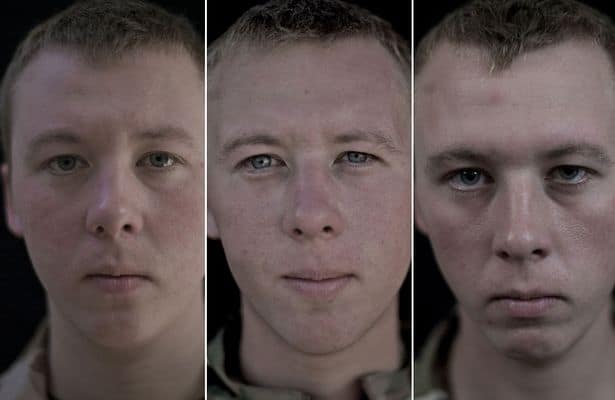 This is one of many images from photographer Lalage Snow’s exhibition of the before and after effects of war on soldiers. As part of her “We Are The Not Dead” project, Snow interviewed soldiers in England and Afghanistan, uncovering their stories and how the war impacted them.

This set of photos is of Private Ben Frater. The first image was taken before Frater left for war. The second was shot while on the ground in Afghanistan, and the third three days after he returned home.

What Frater experienced has certainly hardened his features. It’s also affected his mental state, with Frater telling Snow he is unable to sit still. “I find that I’m getting bored easily after 10 minutes. I feel anxious all the time that I should be doing something.” 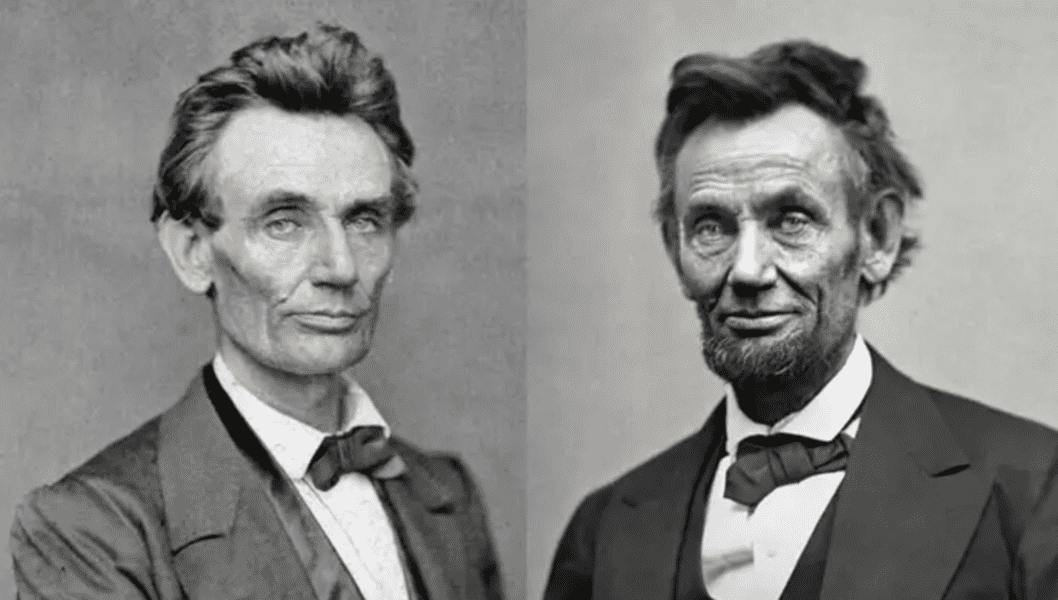 Arguably the greatest President America has ever had, Abraham Lincoln went through a tough period when the Civil War kicked off. Opposing slavery, President Abraham Lincoln and the Union took on Jefferson Davis and his Confederacy, fighting for the rights of the African American people.

As you can see from these two images, the war took its toll on Lincoln. The first image, taken on May 20, 1860, ten months before his inauguration, shows a fresh-faced Lincoln ready to make big changes to America. The second photograph was snapped on February 5, 1965, just a few months after the end of the American Civil War. Lincoln sports a goatee and looks much older, with the war no doubt impacting his facial features. 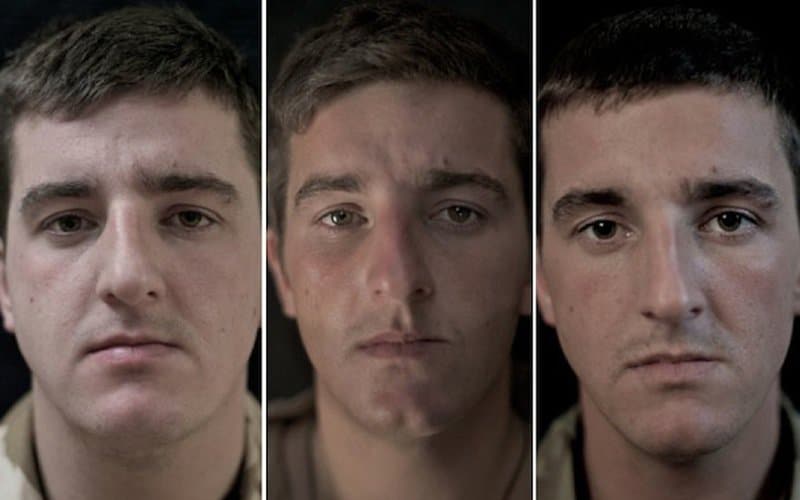 Another set of photos taken by Lalage Snow, these are of Lance Corporal Martyn Rankin. At just 21 years of age, Rankin is very young and no doubt saw some things he wished he didn’t have to on the battlefield. He has clearly lost weight since the first picture was taken and has a stern look on his face. 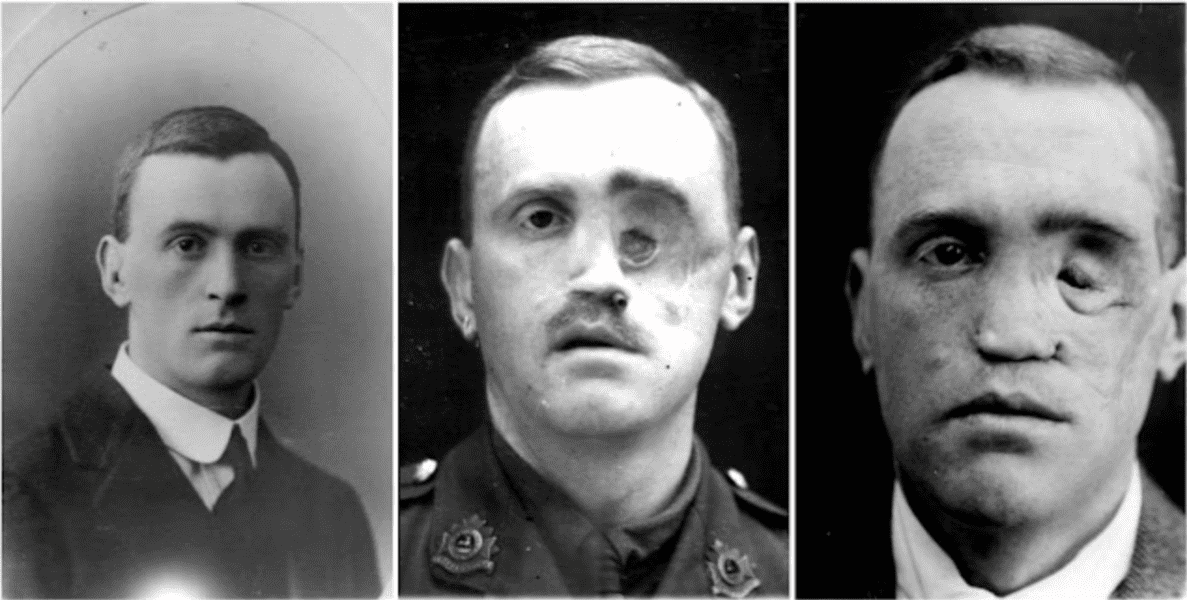 This series of images shows the battle scars of Lieutenant T.H. Elderton. A member of the 3rd Batallion, Bedford Regiment, Elderton was in the thick of it during World War I. Like many of his fellow soldiers, he was severely injured during battle and lost his right eye. The last two pictures show what Elderton looked like after being operated on by Dr. Harold Gillies.

Although Elderton lost an eye, he managed to survive and live a fulfilling life, unlike so many other soldiers.

See more about - The 54 Best War Movies Of All Time 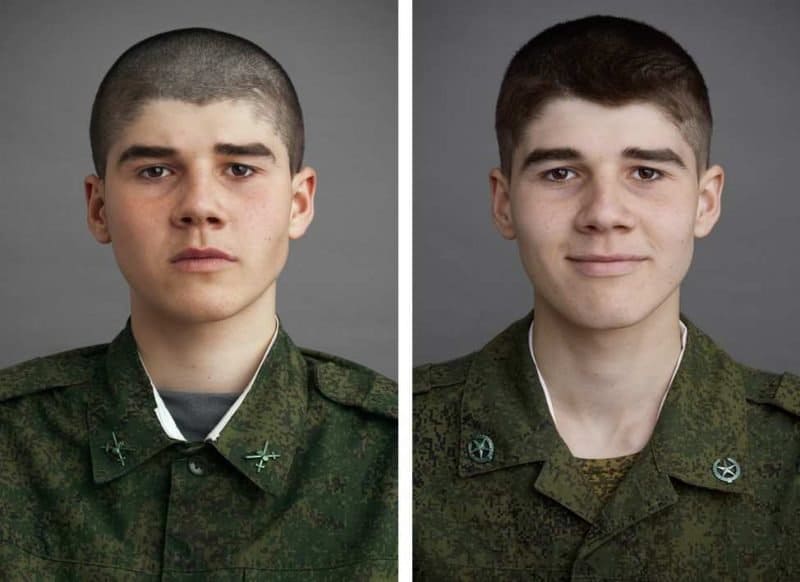 Russian photographer Yuriy Chichkov is another artist who created a project that capture soldiers before and after being in the army. He took pictures of soldiers before they recited their oath and then one month before demobilization. While he recorded their names and place of birth, he had no other discussions with the soldiers. He wanted to let the photos speak for themselves.

This soldier looks quite frightened and apprehensive in the first photo, unsure what he has gotten himself into. While he looks much paler and skinnier in the second photo, he’s almost smiling. This is an indication that he is relieved his time in the army is coming to an end and can not wait to see his family.

While Private Becky Hitchcock hasn’t changed too much physically, there is something about her eyes that hides a darkness. As she explained when talking with the photographer Lalage Snow, being exposed to war certainly makes you look at life differently.

“I treated a little boy with burns to his whole body. He was tiny, a lovely-looking lad,” Hitchcock said. “We made him stable enough to get to Bastion. But two days later his body went into shock and he died. They had to return the body for us to hand back to the family. Carrying him dead, having carried him alive two days previous, it was a weird feeling. But it’s part of the job. I don’t think I take things for granted as much as I used to.” 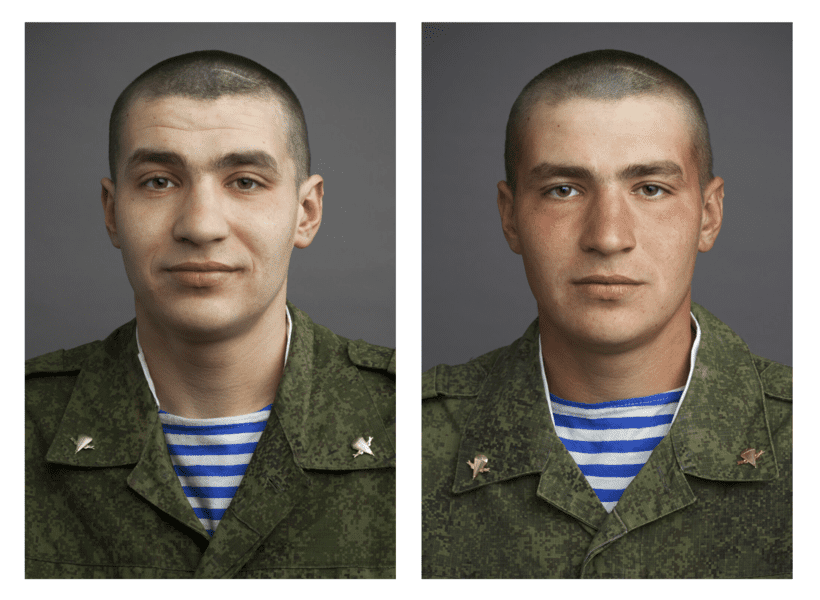 This is another selection of photos taken by Russian artist Yuriy Chichkov. In the first picture, the soldier seems ready to join other Russian troops on the frontline ready to take on Ukrainian forces. The second shows him a little thinner, a little tanned, and looking ready to return home. There isn’t much joy on his face, but a sense of apprehension for what lies in front of him moving forward.

Chichkov didn’t speak to the soldiers about their experiences. He also refused to make any comments on how the army may have influenced his subjects. “Sometimes words are powerless to explain the changes that people undergo; it can only be done at the level of emotions, which is where photography comes in,” he told Russia Beyond. 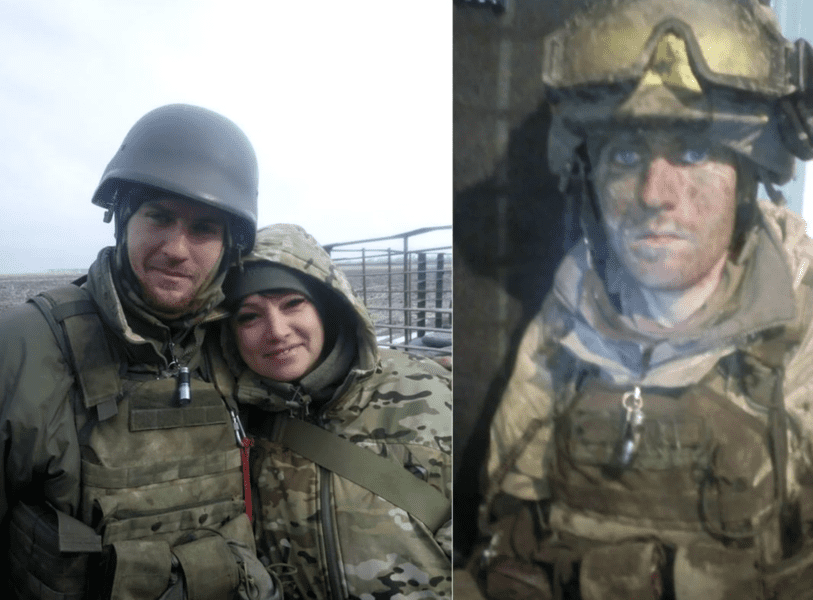 There isn’t a lot of information concerning who this soldier is or who took the picture. What it does show is the impact of the current war in the Ukraine. The photo popped up on Reddit and shows the two sides of a soldier before and after fighting Russian forces.

In the first, he poses with a young woman, possibly his partner, with both smiling and seemingly unfazed about things. The second is a lot more visceral and is an up-close picture of the man whose face is covered in mud.

There is no smile on his face either, replaced with a blank expression. The sad thing is the war in the Ukraine is still ongoing and could be for many years to come. 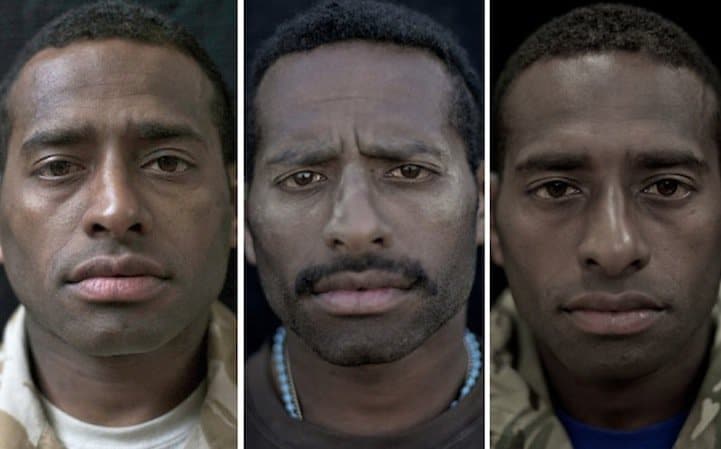 Private Jo Yavala looks like someone who has seen things no man should have to encounter. Another subject photographed by Lalage Snow, Yavala’s expression doesn’t change much throughout the three photos, but his eyes certainly appear more grizzled in the final shot. He looks much older than 28 and has an intensity about it him.

See more about - 12 Celebrities Who Have Not Aged Well