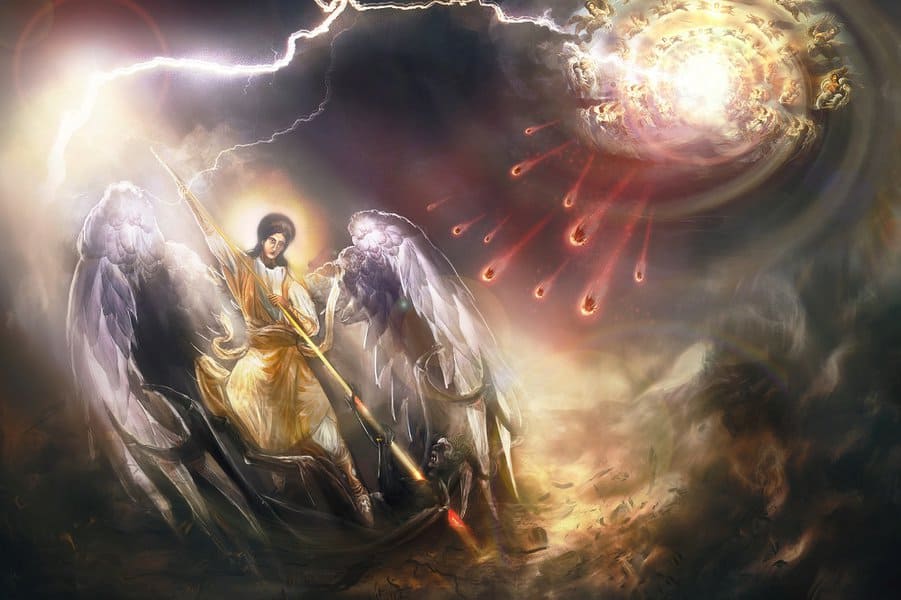 When we think of angels, people usually picture heavenly beings with a human-like appearance, a glowing aura, and giant wings. According to George Bailey’s daughter in the classic, It’s a Wonderful Life; an angel gets its wings when a bell rings. However, none of these descriptions match the appearances of angels in the Bible or other religious texts. Most of the passages describe angels as horrifying monsters that’ll cause nothing but nightmares. That’s not to say they’re evil creatures. Even the scariest-looking angels are God’s messengers.

It’s safe to assume George Bailey’s story would unfold differently if his angel had multiple heads. On the other hand, a few angels can’t help but be mischievous. Around the Middle Ages, angels transformed from monsters into angelic beings. The popular depictions of angels come from artists and filmmakers, not religious texts. 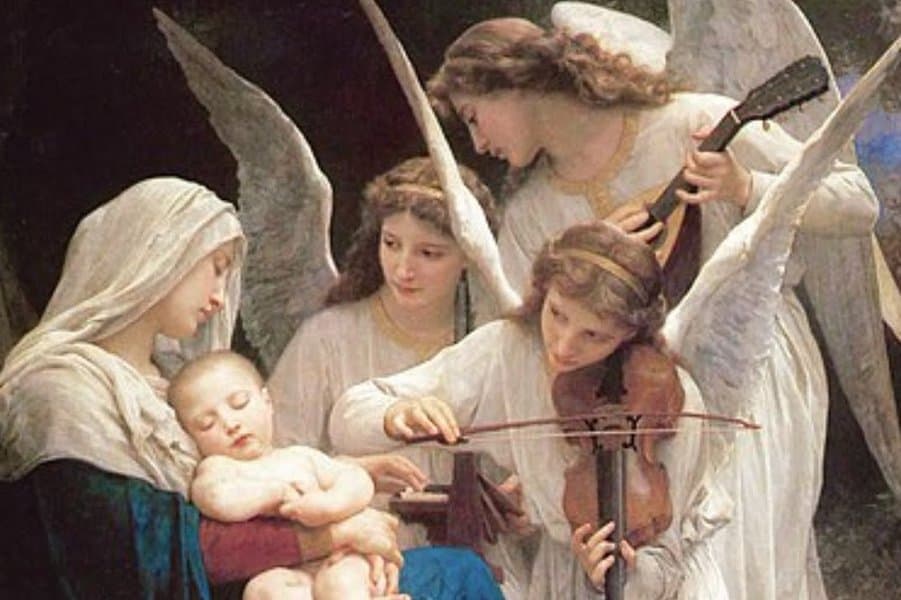 Art, TV shows, and movies usually depict angels as celestial beings that arrive on earth with a message from God. As the story goes, they have a calming effect on anyone they approach due to their divine appearance.

Perhaps an angel’s true appearance is too much for our human brains to handle. However, it also seems angels are aware that they look frightening. For instance, they often appear as a warning to humans not to be scared. It would be tough not to panic if an angel with multiple heads showed up in the middle of the night with a message from God.

The belief is that humans cannot comprehend an angel’s proper form. They’re divine creatures that stand with God and have immense power that frightens humans. Furthermore, many people believe that angels live outside of space and time. The human brain becomes terrified because it’s never encountered a divine light that powerful before. Hence, human brains need to see something they recognize.

In other words, it’s comforting and easier for humans to picture angels as something we recognize and see daily. Instead of angels being terrifying creatures that cause sleepless nights, we view them as human-like with divine powers serving as God’s messengers.

They give humans a calming feeling allowing them to accept love, faith, and hope in their hearts. On the other hand, the four-headed monster with giant wings will give them nightmares. 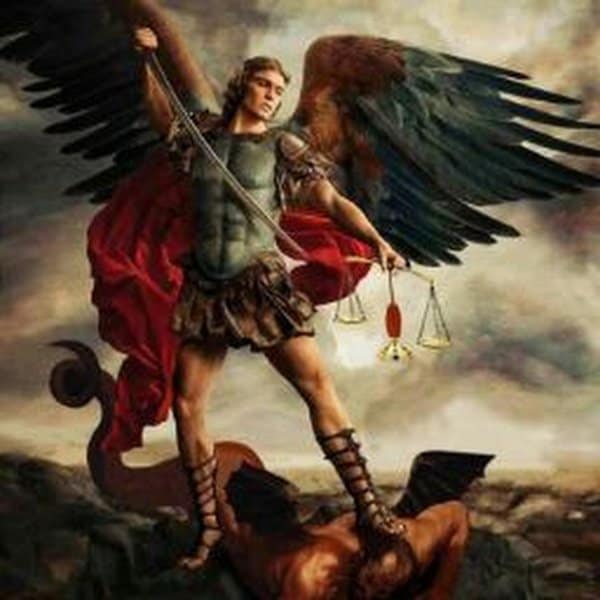 Before we look at the terrifying angels, let’s examine the closest human-like angels. For the most part, popular descriptions of angels are similar to Malakim. Appearing in the Old Testament, Malakim are humanoid creatures that serve as God’s messengers and do his bidding.

Initially, they were wingless but heavenly creatures in the Hebrew Bible. It was during the 4th century that Malakim started appearing with giant wings and a glowing aura around them. However, most angels look nothing like the Malakim. 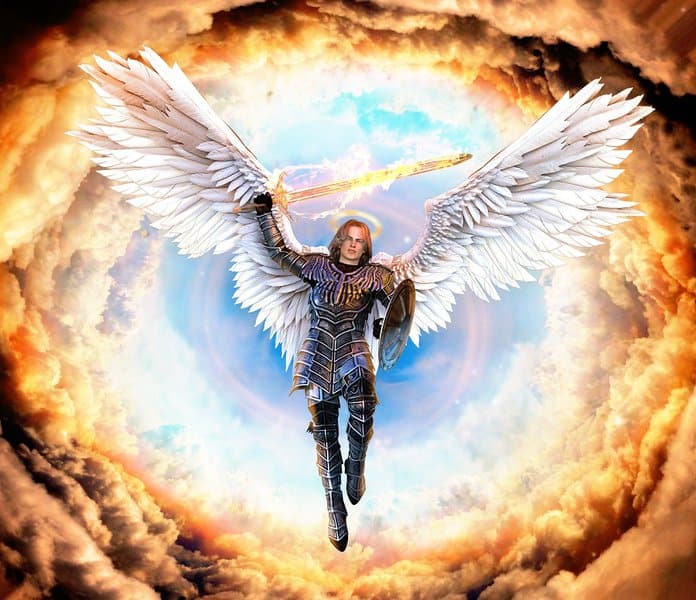 The Archangel fits the popular descriptions of angels as well. Archangel Micahel appears in the Hebrew Bible, the New Testament, and the Quran. As the chief Archangel, Michael’s in charge of the other archangels and angels. He often does God’s bidding and even engages in epic battles.

Michael appears prominently in Revelations as he has an incredible showdown with Satan. However, most of the angels in the Bible look drastically different. 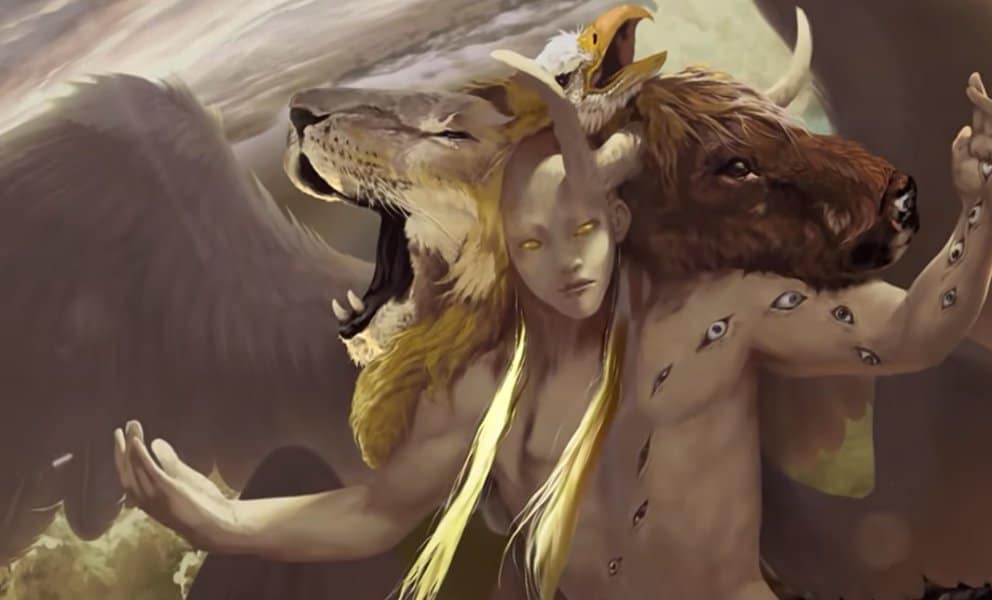 In the Bible, Cherubim is a noble angel that guards the Garden of Eden after God forces Adam and Eve to leave the divine garden. Throughout history, artists depict Cherubim as tiny, chubby child-like creatures with short wings and a harp. However, the Bible’s description of Cherubim is drastically different.

In Ezekiel’s vision, the Cherub is a terrifying angel with four heads: a human, an ox, a lion, and an eagle. Appearing prominently in the Hebrew Bible, they have straight, shiny legs with bull hooves and two pairs of wings. The description likely changed to a cupid-like creature due to different cultures influencing the original religious texts. 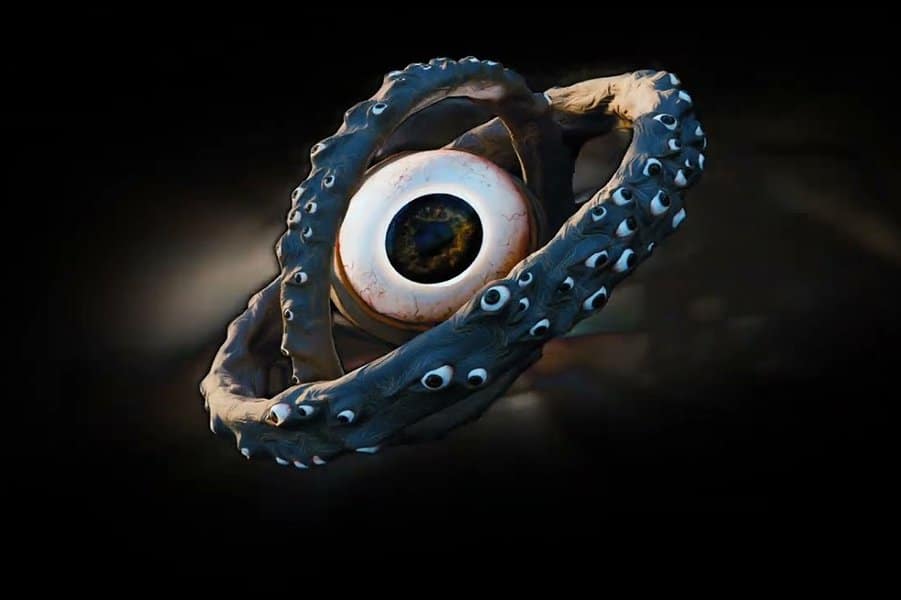 In Ezekiel’s vision, the Cherub doesn’t come alone. Indeed, mysterious heavenly beings known as Ophanim join the Cherub. According to the vision, Ophanim are interlocking floating gold wheels with sets of eyes covering the outer part. The Book of Enoch describes them as heavenly beings guarding God’s throne with Cherub and Seraph.

At the same time, the Dead Sea Scrolls and Catholic Church regard Ophanim as angels. Also called the many-eyed ones, theories suggest the wheels are from God’s chariot, although that’s not confirmed. Regardless, the heavenly floating wheel with eyes is nothing like the famous description of angels. 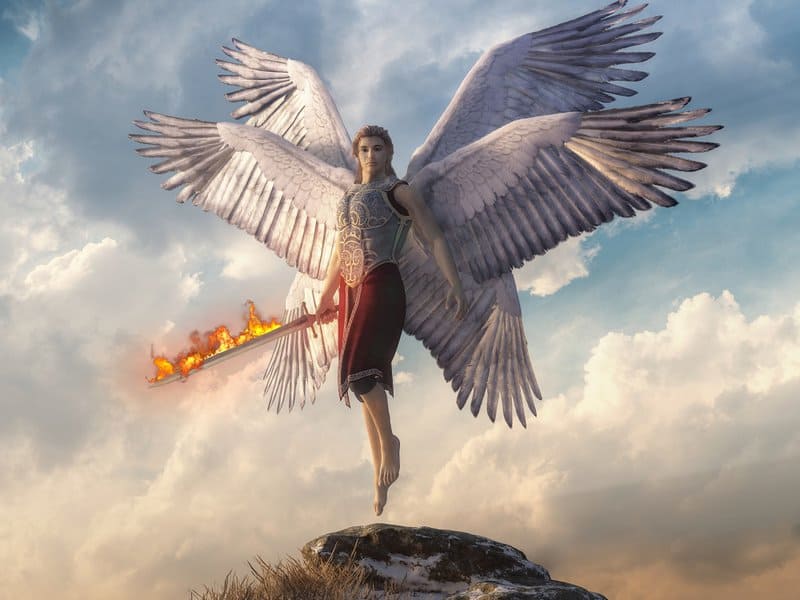 Seraph is a celestial being that appears in several different texts. Appearing in the Book of Isaiah, the divine creature surrounds God’s throne, singing, “Holy, holy, holy.” The Hebrew Bible describes the Seraph as a divine yet terrifying serpent-like creature that symbolizes fire.

Also known as the burning one, Seraph has six giant wings. They use four of the wings to cover their face in the presence of God to show modesty, with only two for flying. The Seraph is the highest being in the angel hierarchy in Christian angelology. 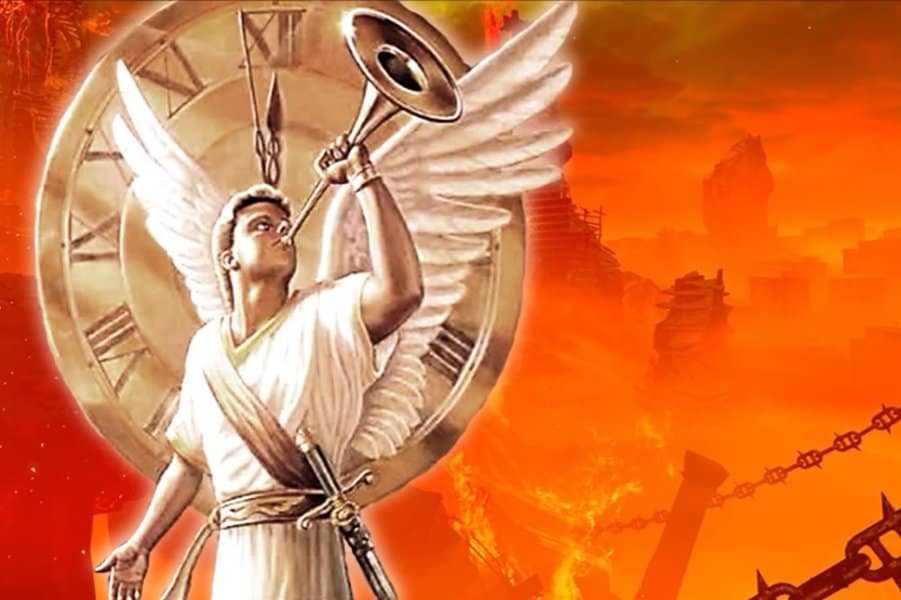 While heaven is a sacred place, it’s full of scary angels that seem like something out of a horror movie. Therefore, the theory suggests that angels appear in human form to calm people down. For instance, in the Book of Enoch, God blesses the prophet, Enoch, with a vision of heaven.

Well, it doesn’t appear to be a blessing to the prophet. He panics and begins to scream hysterically. He even comments, “No trace of delight or of life was there. Terror overwhelmed me, and a fearful shaking seized me.” Therefore, the horrifying angels take on human forms to calm him down. Enoch then comes to a void with stars suspended, which the angels explain is a type of prison for fallen angels. 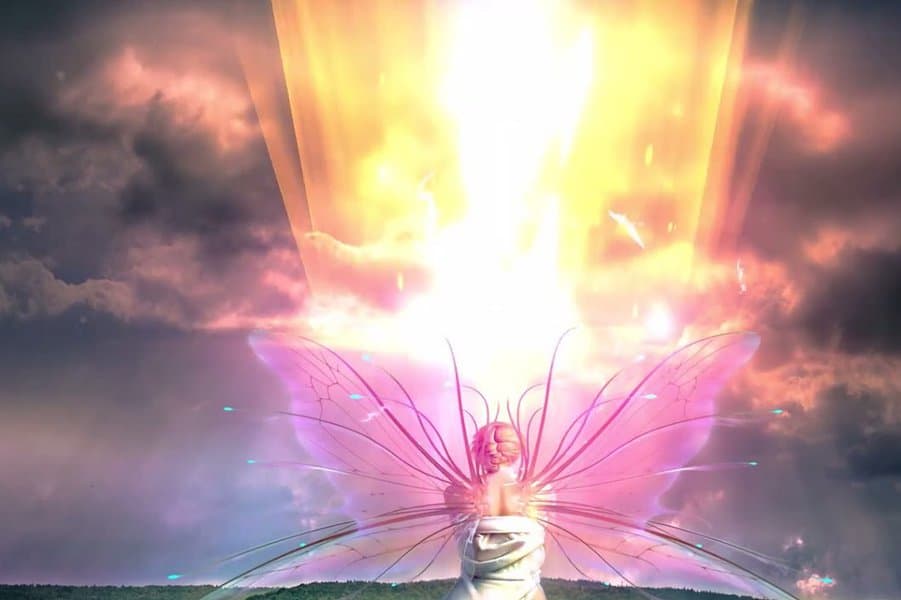 However, Enoch soon encounters more terrifying creatures. In the Second Book of Enoch, he meets mythical angelic beings called Chalkydri. Despite being heavenly creatures, they’re a hybrid of animals with a horrifying appearance. In Ancient Greece, their name means “brass copper” and “water serpent.”

These divine creatures live near the sun with the immortal bird, the phoenix. The rainbow-colored Chalkydri has a crocodile’s head and twelve massive wings with a lion’s tail and feet. Despite their fear-inducing appearance, they have a heavenly voice and break into song at sunrise, informing all the birds on earth to enjoy a new day.

8. The Angels of the Accuser 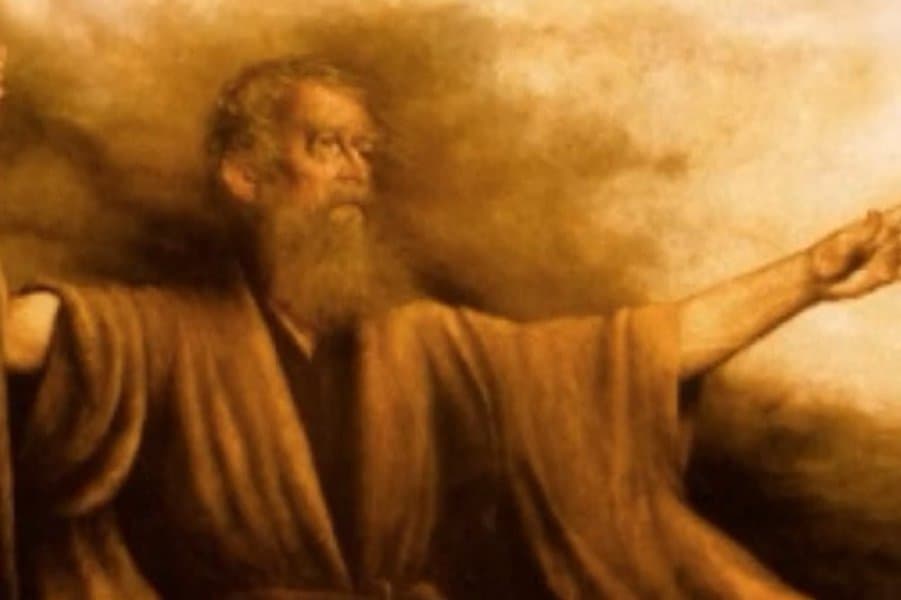 Of course, the Bible only gets weirder from that point. While not considered scripture, The Apocalypse of Zephaniah is closely associated with the Old Testament. The 1st-century Jewish text is known for featuring apocalyptic and supernatural elements.

The vision of Mount Seir is a vital part of the text. The horrifying vision takes place in front of the Bronze Gates featuring the scariest angels. In the vision, the angels of the Lord write down all the good deeds in a person’s life. At the same time, the angels of the Accuser write all the evil and bad deeds. Zephaniah describes the angles as terrible, with long hair, tusks, and leopard faces. 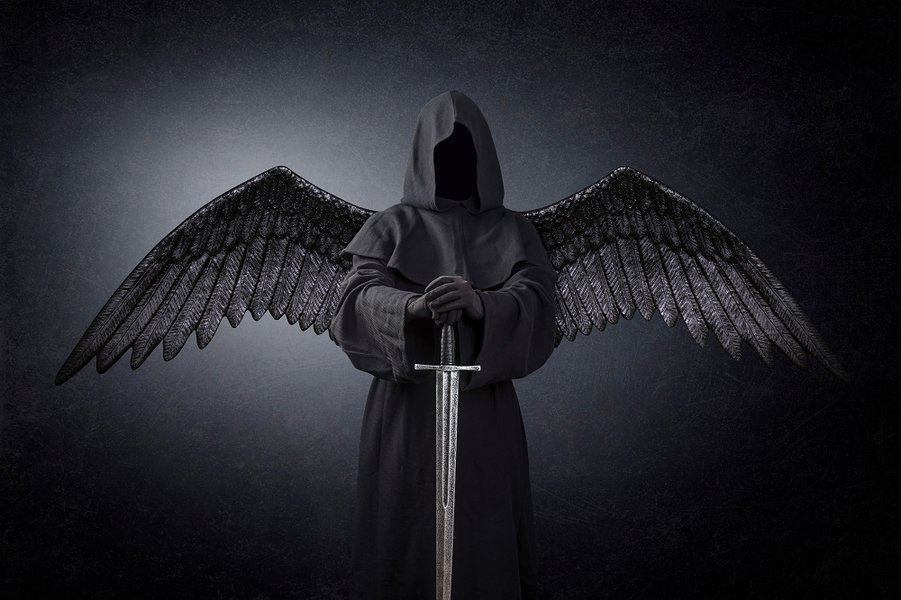 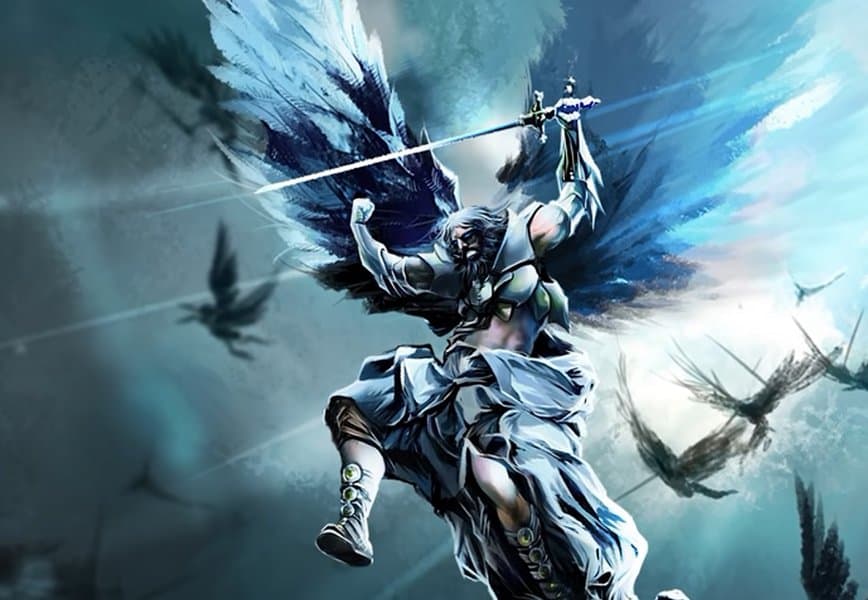 In addition to angels appearing to be monsters from a different realm, their behavior isn’t becoming of heavenly beings. In the book of Genesis, fallen angels or God’s sons couldn’t resist the temptation of human women. The angels decided to take a little trip to earth while God was busy.

The Book of Enoch gives a more detailed explanation of the events. A group of angels called The Watchers rebelled against God and ventured to earth. In addition to sharing forbidden knowledge, the angels had children with the daughters of humans. They produced monstrous bloodthirsty giants called Nephilim. These giants took over the planet, forcing humans to make their food until becoming their food.

Eventually, God realized what had happened and imprisoned the angels. He then instructed Noah to build an ark and unleashed a furious flood. God forced the angels to watch as their children died a painful death. 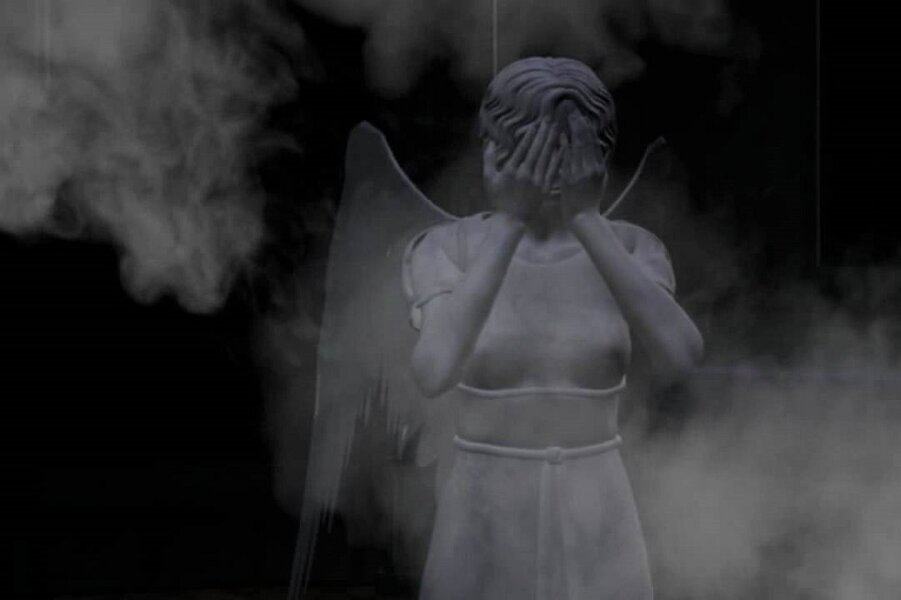 Despite the appearance of angels in the Bible, it appears the humanoid angel is here to stay. In movies and television, the classic heavenly angel is still the most popular but appears with a twist. For instance, the science fiction series Doctor Who introduced the Weeping Angels in the episode “Blink.”

Regarded as the series’ most famous monsters, the Weeping Angels resemble tall human-like angels but are aliens older than the universe. The horrifying monsters return in the critically acclaimed episode “The Angels Take Manhattan.” Later, the series introduced the cupid version of the Cherubim as evil weeping angels.