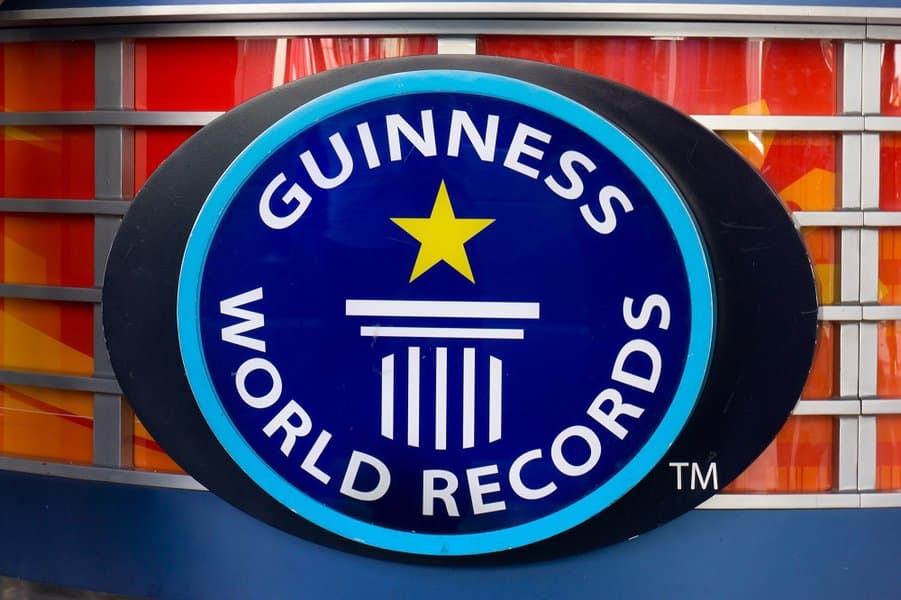 Guinness World Records is the official organization that keeps track of all the world records set across the globe. Founded by Sir Hugh Beaver and originally known as The Guinness Book of Records from its inception in 1955 until its name change in 1999, the institution is responsible for confirming every world record attempt that takes place on earth. All the weirdest world records and most unbelievable record attempts are adjudicated by members of the GWR staff, with all the results available on the Guinness World Record website and inside the annual book published by the company.

When it comes to submitting a record, anything goes, as long as it is overseen by an official adjudicator. That’s why the Guinness World Records book is full of so many strange records. There’s a man who holds the record for the longest tongue, a family who holds the record for being the hairiest family, and even a world record achieved for drinking 2 liters of soda in 18.45 seconds, which is the fastest recorded time.

To highlight some of the weirdest world records held by numerous individuals around the world, we have selected some truly bizarre records you probably didn’t even know existed. 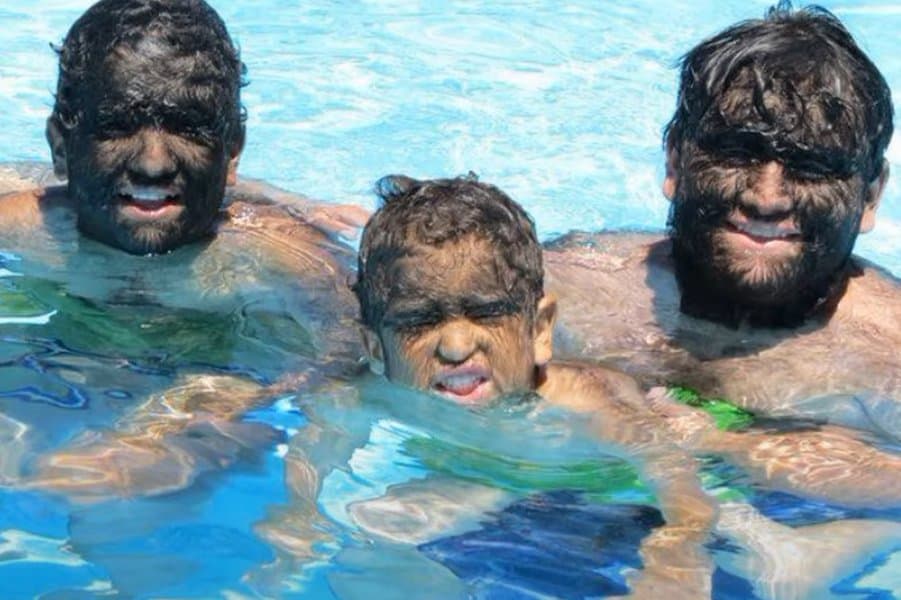 The Ramos Gomez family is proud to be the holder of the 2000 record for the largest hairy family in the world. Mexicans Jesús “Chuy” Fajardo Aceves and Luisa Lilia De Lira Aceves are two members of this 19-person family who suffer from a rare condition known as congenital generalized hypertrichosis (excessive facial and torso hair).

The women in the family have a light to medium coat of hair covering their bodies, while the men have thick tufts of hair that cover 95% of their entire bodies. Interestingly, two other members of the family, Victor “Larry” Gomez and Gabriel “Danny” Ramos Gomez, both perform in the Mexican National Circus.

2. World Record for the Tallest Hat 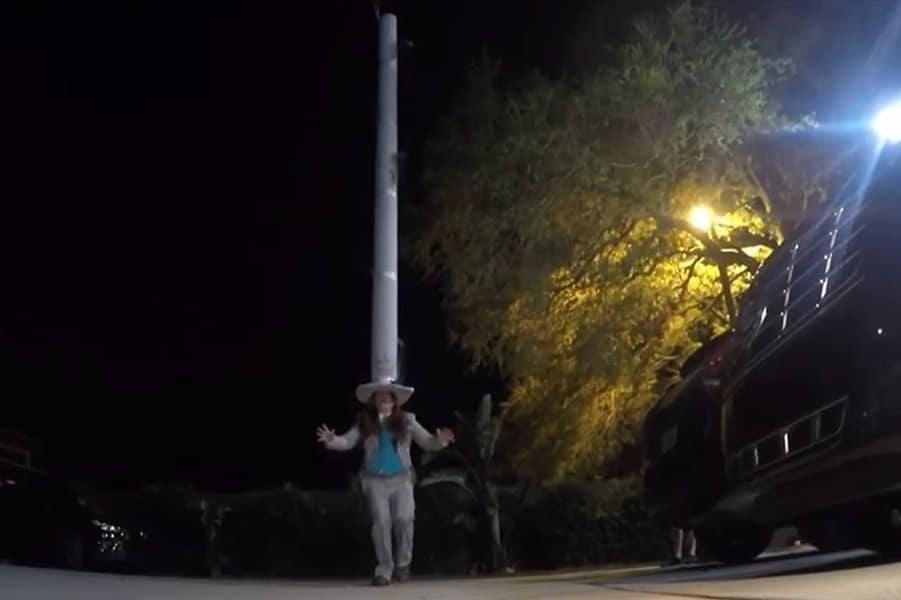 Florida man (surprise, surprise) Odilon Ozare set the record for the world’s tallest hat in 2018. The creation stands 15 foot 9 inches tall and is a rather impressive feat. What makes this record even greater is that Ozare had to walk almost 33 foot while wearing the hat for the record to be considered.

The extraordinary top hat has several feathers sticking out of it and now resides at Ella’s Folk-art Café in Tampa. Ozare is pretty chuffed with the response to his hat, telling GWR, “I hope that people get inspired to attempt their own Guinness World Records title. As humans, we are always looking to challenge ourselves, whether it’s climbing a mountain or running a marathon. I feel like Guinness World Records is, and always has been, a way of challenging oneself in an infinite number of ways. There is a record every man, woman, and child in the world was built to achieve, they just have gone for it. The new online database of records is a great place to start.”

3. World Record for the Largest Condom 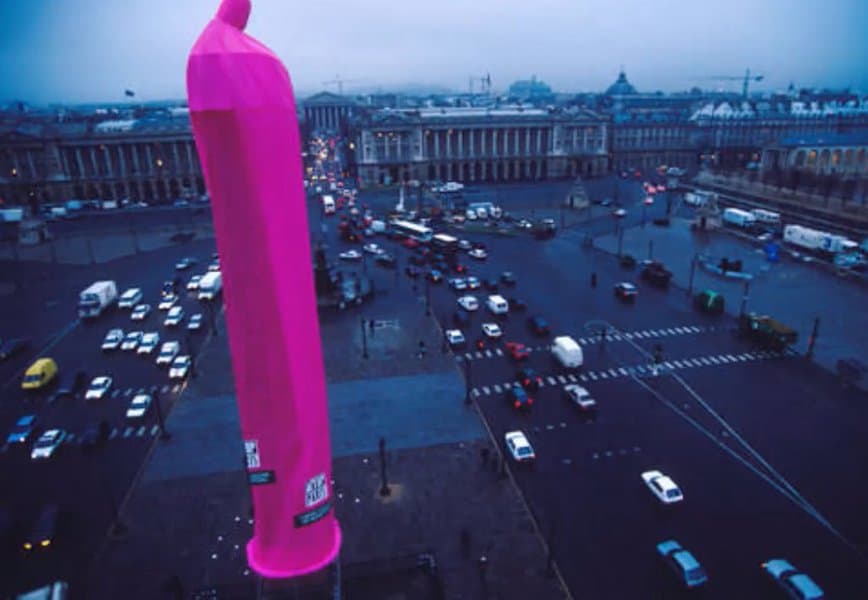 Italian clothing company Benetton Group created the world’s largest condom. The 72-foot prophylactic was made to mark World AIDS Day. It was fitted over the Obelisque in Place de la Concorde, Paris, France, on December 1, 1993. Nobody has tried to better the record since either.

4. World Record for the Longest Fingernails 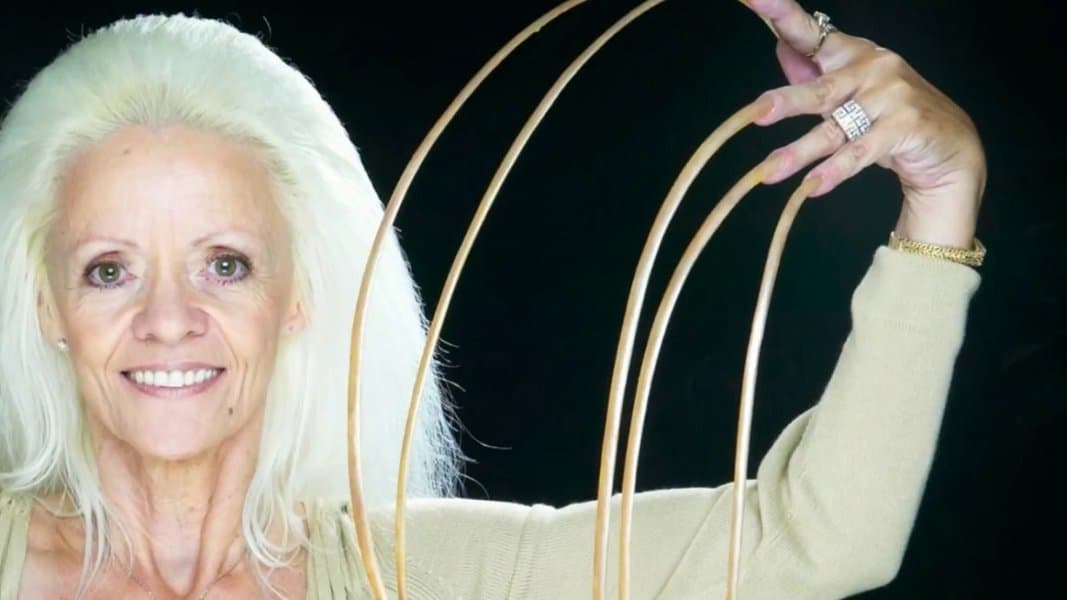 American Lee Redmond once held the record for the world’s longest fingernails. After nearly 30 years of growth, her nails measured a total of 28 foot 4.5 inches. The longest nail was on her right thumb and measured a whopping 2 foot 11 inches.

“I started to grow my nails in 1979…it was kind of a challenge to myself to see how far they would go before they started twisting out of shape,” Redmond said in a chat with Guinness World Records.

Unfortunately, Redmond lost the nails in a road accident in 2009, just a year after she was officially recognized as having the longest fingernails of any female in the world. 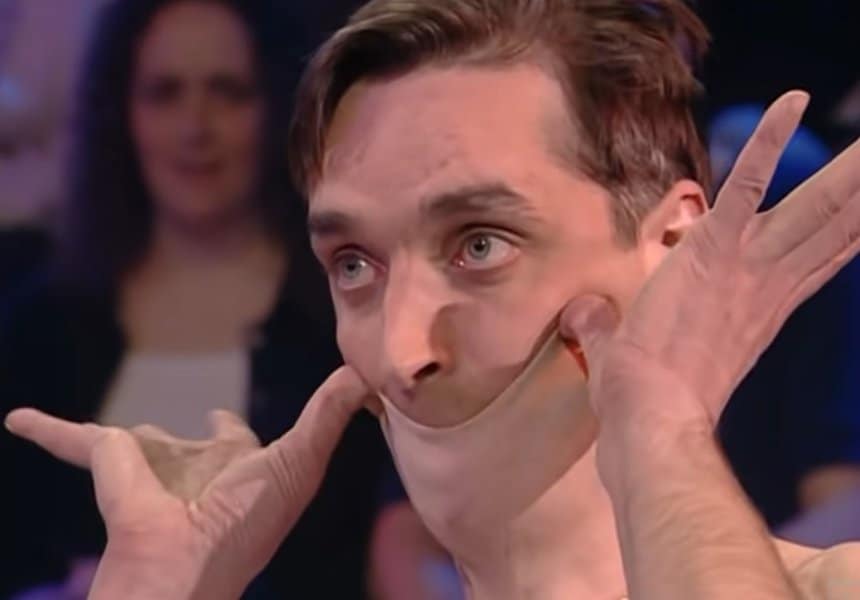 Here’s a weird world record you probably haven’t thought about existing: the world’s stretchiest skin. It belongs to UK man Garry Turner who is able to stretch the skin of his stomach some 6.25 inches. It’s not just his stomach though, with all the skin on Turner’s body able to be stretched much further than most people’s.

The reason behind Turner’s stretchy skin is Ehlers-Danlos Syndrome. This condition has many side effects, including the loosening of the skin. While not fatal, there is no known cure and the syndrome can cause joint pain.

6. World Record for the Heaviest Weight Lifted by a Beard 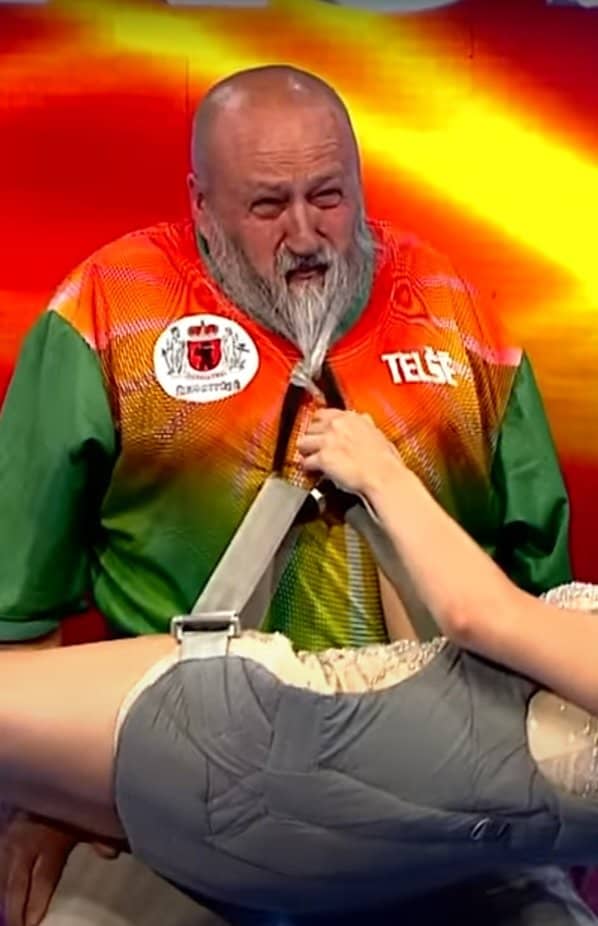 Antanas Kontrimas holds several Guinness World Records. Each one is connected to the Lithuanian’s impressive beard. Somehow Kontrimas is able to lift huge weights with his lush beard. His record for the heaviest weight lifted by a beard is 140 pounds and 16 ounces which was achieved on the set of Guinness World Record affiliated show Rekorlar Dunyasi in Istanbul, Turkey in 2013.

7. World Record for the Longest Mustache 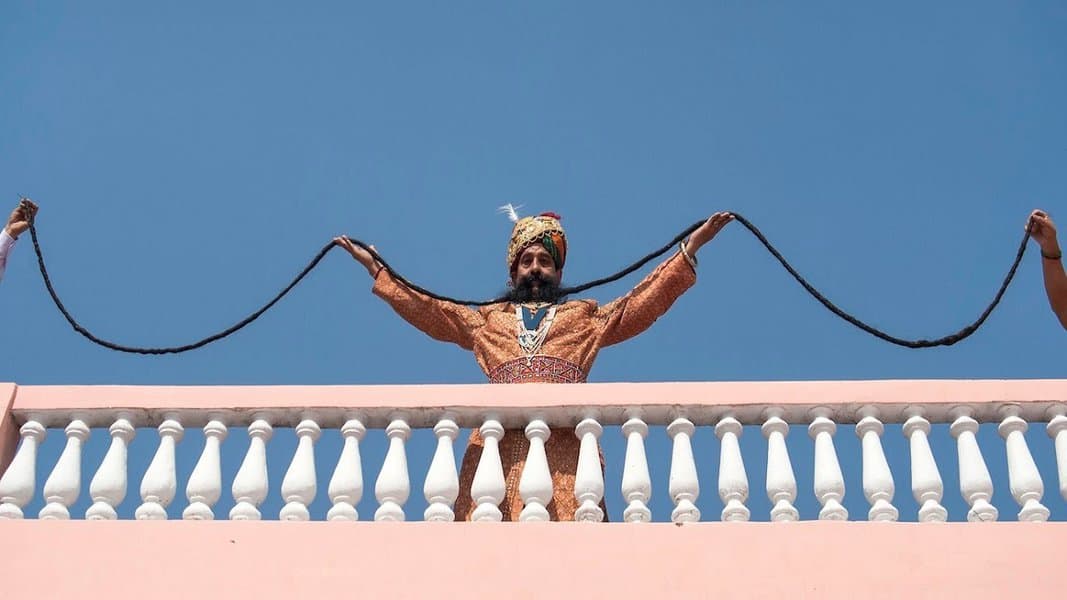 Speaking of facial hair, Ram Singh Chauhan is the man who is known for having the longest mustache ever recorded. Chauhan’s striking moe measures 7.02 feet long. He’s been growing the mustache for almost 40 years, with the record confirmed on the set of Lo Show Dei Record in Rome, Italy, on 4 March 2010.

8. World Record for Most Tricks by a Pig in One Minute 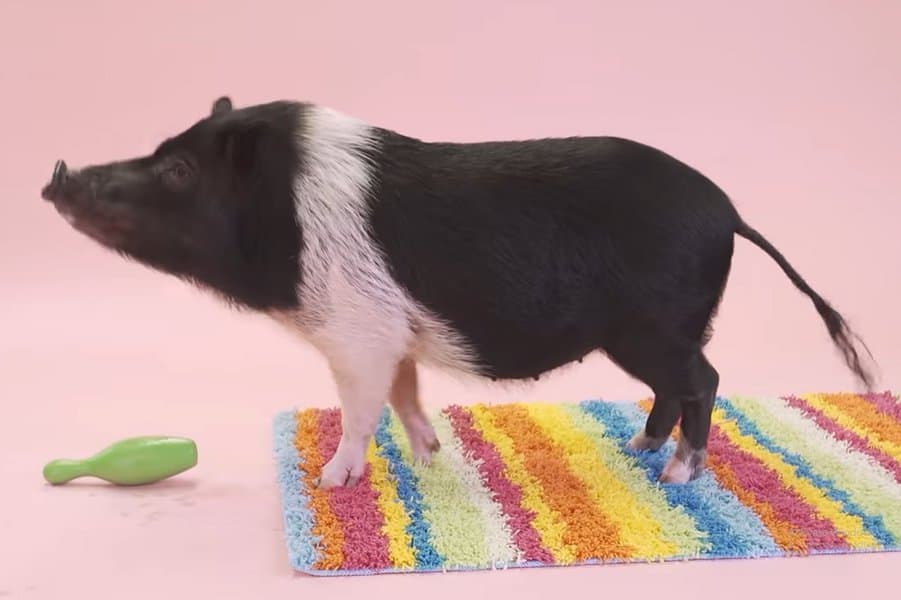 It’s not Dawn Bleeker who is a Guinness World Record holder but her pet pig Joy. Described by Bleeker as a “bit of a diva” and “not your average hog, ” Joy performed 13 tricks in 60 seconds to take out the record for most tricks by a pig in one minute. The 13 tricks Joy completed were sitting, shaking hands, waiting, leaving (ignoring a treat), going ahead (taking a treat), reversing, dancing, honking a horn, playing the piano, removing a rink, knocking over a pin, pickup up, and rolling a ball.

“People are really surprised to see pigs are so intelligent and can do tricks,” said Bleeker, who’s been a lifelong fan of all things with trotters and curly tails. “A lot of them walk away saying, ‘Gosh, my dog doesn’t even do that!'” 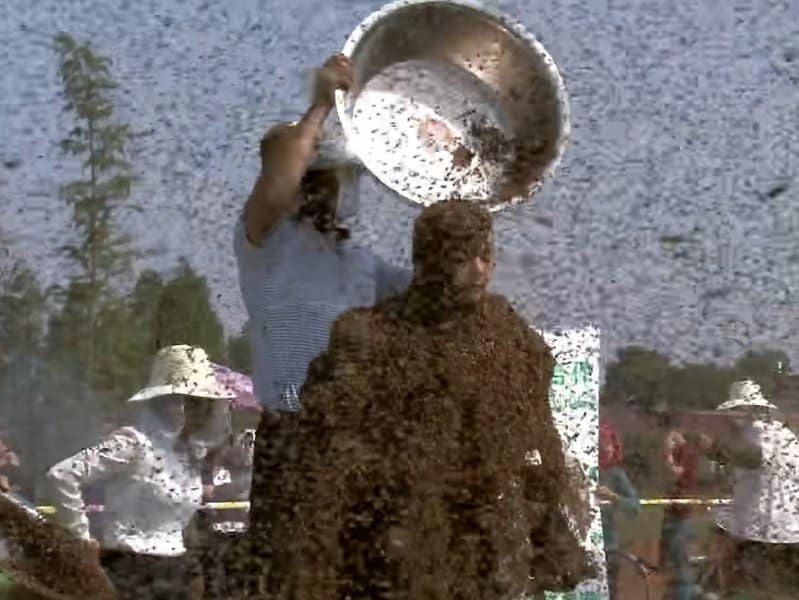 Why you would want to cover yourself in bees is beyond head-scratching, but that’s exactly what Ruan Liangming did to achieve the world record for the heaviest mantle of bees. Known as “bee bearing,” this act involves a person placing a queen bee on their person and waiting as thousands of bees are attracted there to protect the queen and start a new colony. Apparently, it was a popular circus trick in the 19th century.

Liangming attracted 60 queens and around 637,000 bees, with their mass weight being around 140 pounds and 6.96 ounces. The record was filmed for the seventh season of Italy’s Lo Show Dei Record. 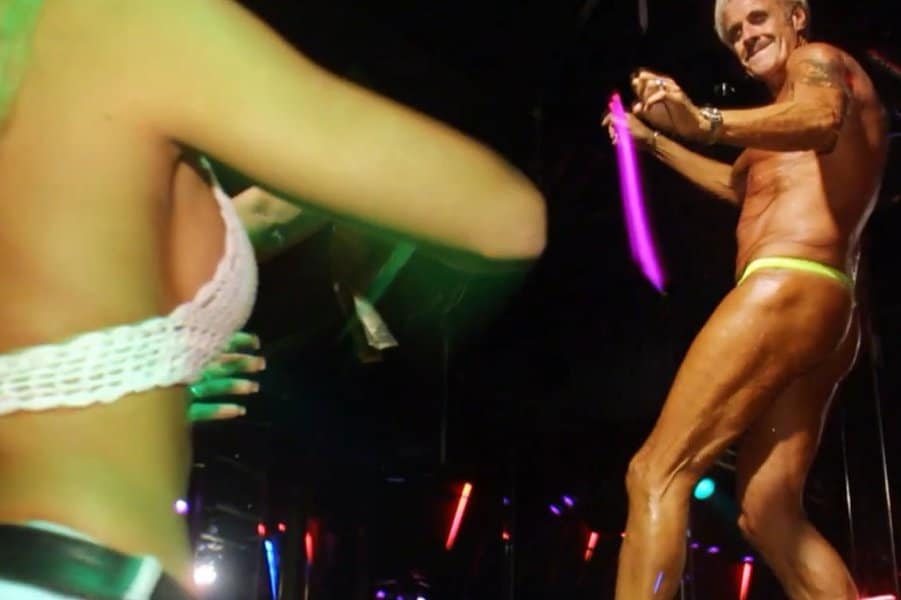 11. World Record for the Longest Tongue 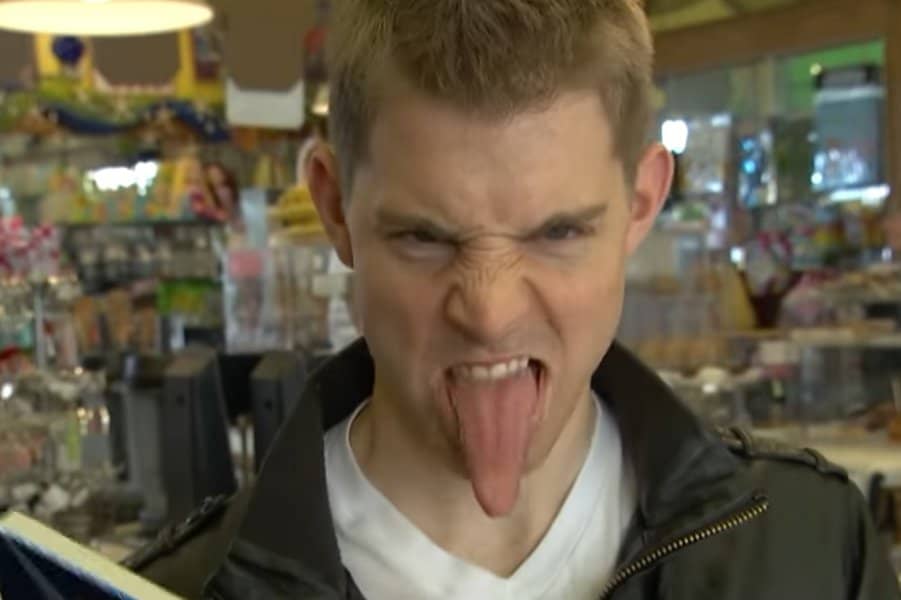 Nick Stoeberl is a resident of the United States of America who also happens to have the record for the longest tongue in the world. It measured an astonishing 3.97 inches and was first featured in the 2015 edition of the Guinness World Records book. The artist and comedian loves the attention his tongue receive, announcing that “I’m not only able to lick my nose, but also my elbow!”

12. World Record for Most Canned Drinks Opened by a Parrott 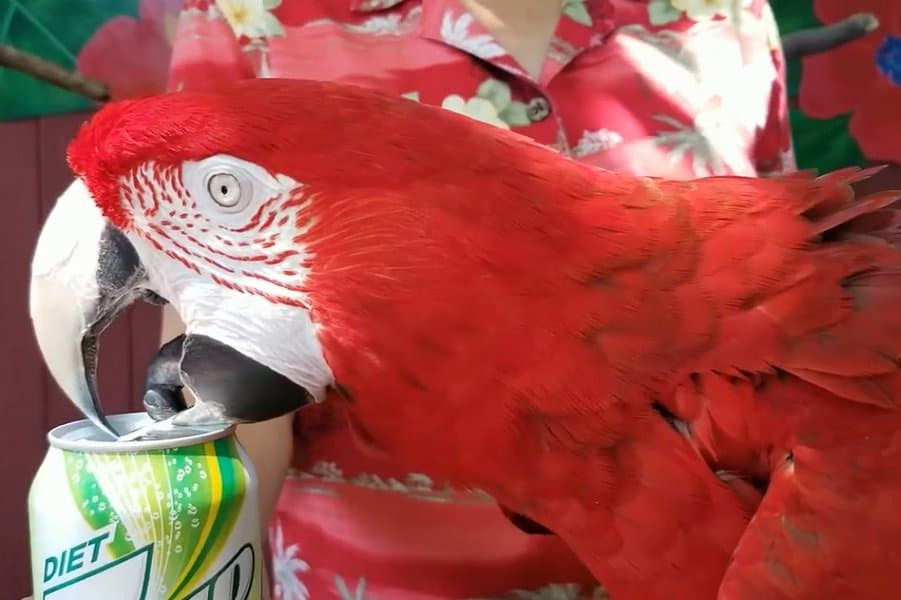 This is a rather niche record achieved by Zac the Macaw. In January 2012, Zac’s owner helped him take out this weird record. In just one minute Zac opened an astonishing 35 canned drinks. Why? Who knows, but it’s still an impressive record, especially considering there is no reason for a Macaw to be opening cans. Setting a record for opening the most canned drinks seems to be a strange thing, but then most world records are these days. I hope Zac brushes his teeth.

13. World Record for Longest Spinning of a Basketball on a Toothbrush 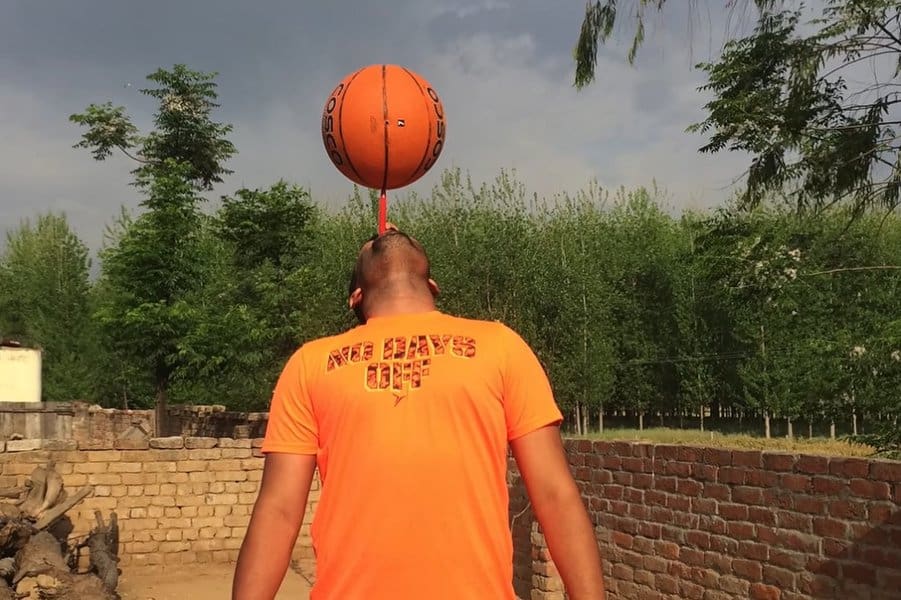 Can you get more niche? Ali Behboodifar of Iran made it his life’s mission to achieve the world record for the longest spinning of a basketball on a toothbrush. This is something he managed to achieve in April of 2022. He managed to keep the ball spinning on a toothbrush for 1 minute and 47.4 seconds. I guess that’s pretty impressive.

Speaking of spinning ball records, Canadian Sandeep Singh Kaila managed to secure the world record for the longest time spinning an American football in 2022 also, spinning it on one finger is 27.63 seconds.

14. World Record for Most Skewers in the Tongue 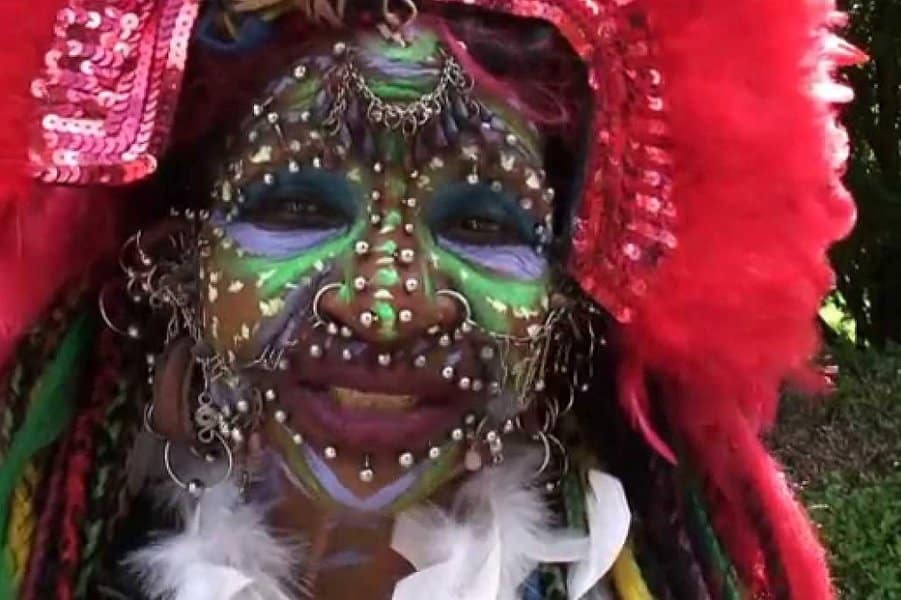 This world record sounds incredibly painful but is one Elaine Davidson completed in 2012. Davidson had 14 metal kebab skewers pushed through her tongue. Each one measured 9.8 inches long and was 0.15 inches thick. She is also the most pierced woman in the world, with a whopping 4,225 piercings. She has more piercings in her genitalia than anywhere else on her body too. 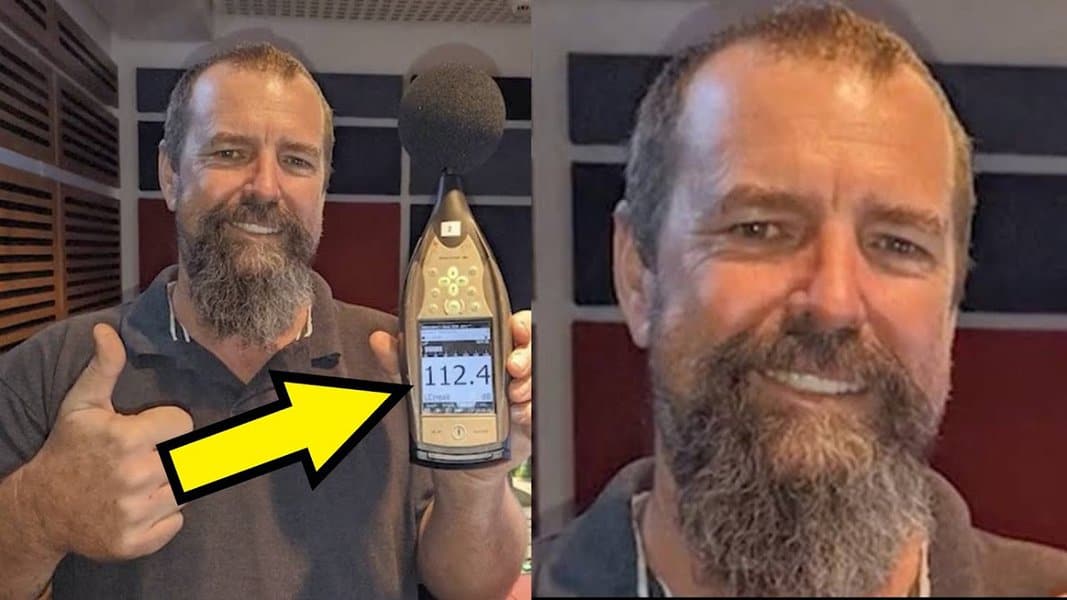 No surprise this record is held by an Aussie. Neville Sharp has the world record for the loudest burp by a male. Taught to burp as a young lad by his sister, Sharp has been practicing all his life to achieve this record. With help from his wife, who helped “coach” Sharp, he managed to make his dreams come true in July 2021 when he capture the record for the world’s loudest male burp. It came in at 112.4 decibels, with Sharp giving this reason for wanting to break the original record;

“My reason for attempting to break this record was to be a world record holder. The secondary reason was that the world record has been held by an Englishman for over 10 years.”

16. World Record for Most Jelly Eaten With Chopsticks in 30 Seconds 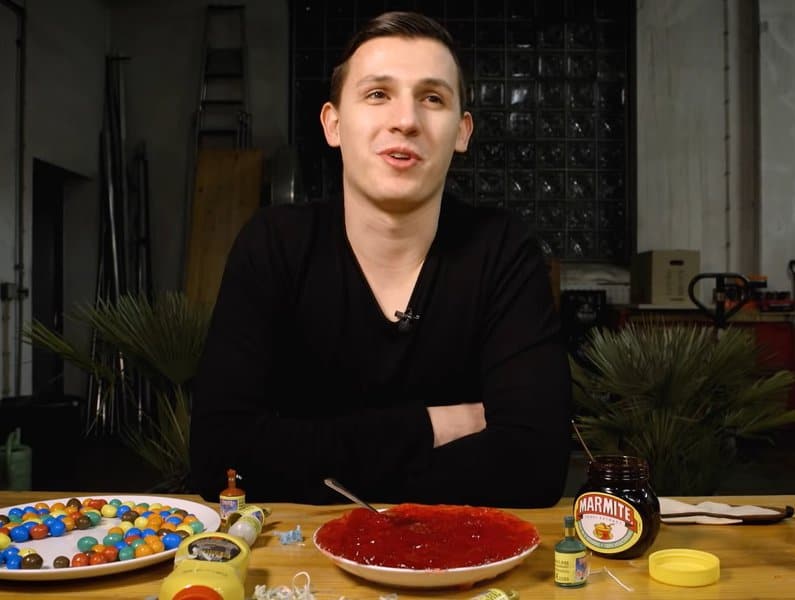 Andre Ortolf is a serial Guinness World Record breaker. He has pretty much made a career out of breaking Guinness records. One of his weirdest involved eating the most jelly with chopsticks in 30 seconds. Ortolf wolfed down 400 grams of jelly in just 30 seconds. This is just one of many world records Ortolf has completed. Some of his other crazy records include running the fastest 100m in clogs (16.26 seconds), running the fastest 100m wearing ski boots (17.65 seconds), and the furthest distance to blow a pea (25.5 feet)

17. World Record for Stopping an Electric Fan With a Tongue 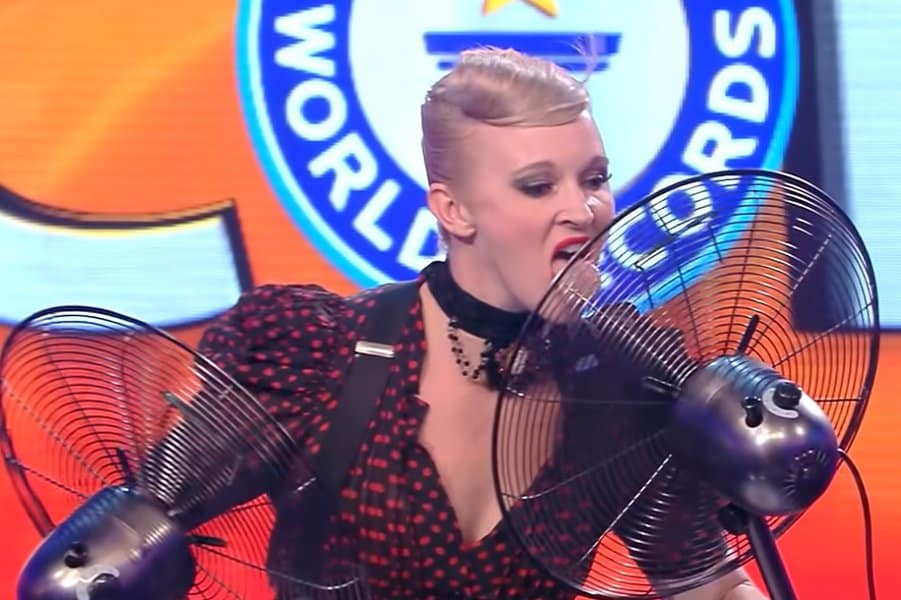 Australian circus and side-show entertainer Zoe Ellis (stage name Zoe L’Amore) did something most of us would cringe at; stopping a fan with her tongue. Not only did she stop it once, but 32 times in under a minute. Although the world record has now been beaten by Ashrita Furman (who managed to stop the fan 35 times), Ellis still holds the record for the most mouse traps released on the tongue of a female in one minute (24). 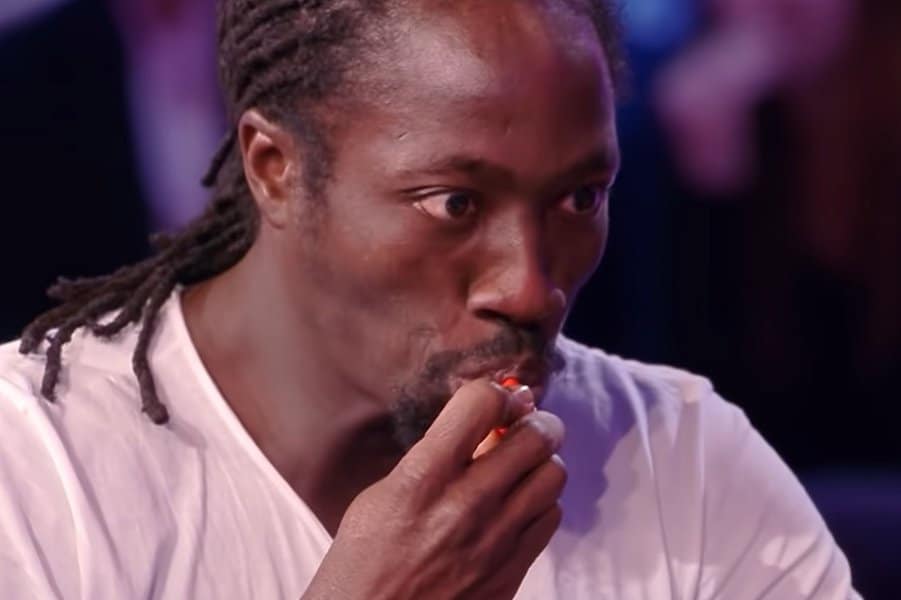 Anyone who knows anything about chilies understands how hot Bhut Jolokia chilies are. So eating one can be considered impressive. Amedonou Kankue smashed through ten of these suckers on his way to achieving this weird world record. It took him just 30.70 seconds, which is 3 seconds per chili. Hopefully, he had plenty of water and milk at the ready after completing this record.

19. World Record for Most Lit Candles in a Mouth 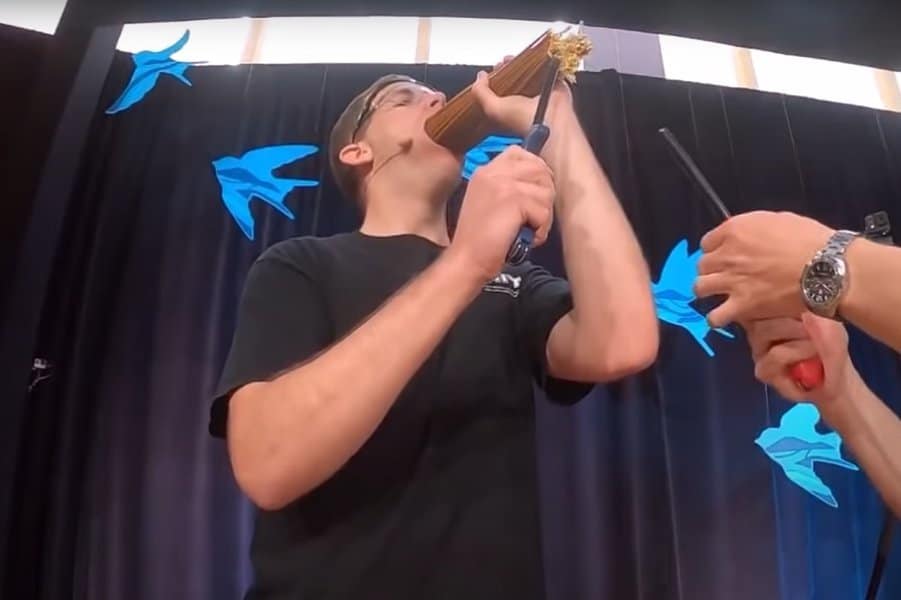 A record previously held by serial Guinness World Record breaker David Rush, the new holder of the world record for most lit candles in a mouth is Garrett James. He only achieved this feat in 2021, managing to fit 105 candles in his mouth. This is five more than Rush could manage.

20. World Record for the Furthest Distance Pulled By a Vehicle While on Fire 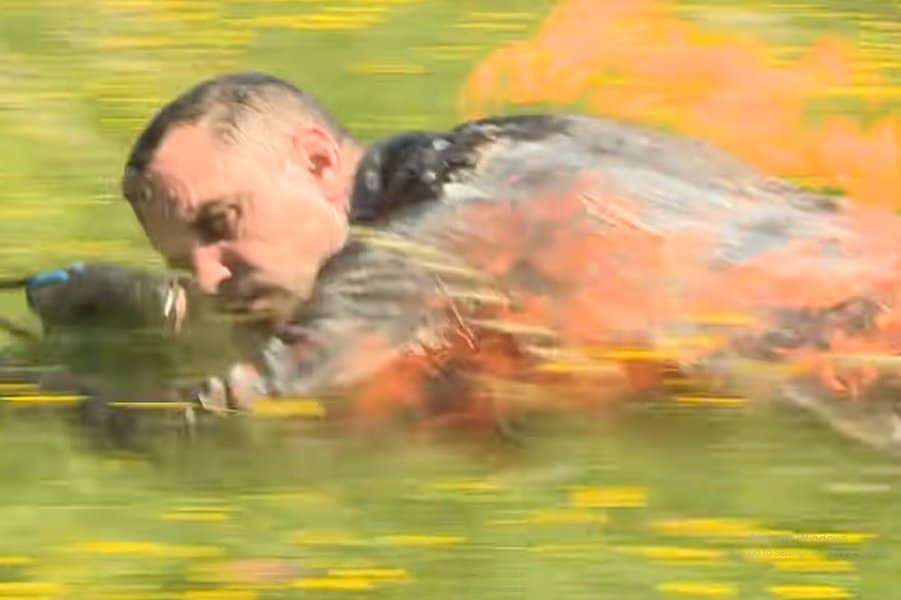 Professional stuntman Josef Tödtling wanted to get into the Guinness World Records and found his in with this wild stunt. He decided to set himself on fire and have a car pull him and see how far he could hang on before it all became too much. He managed to last 1909.45 feet before letting go, which just so happened to be the world record.