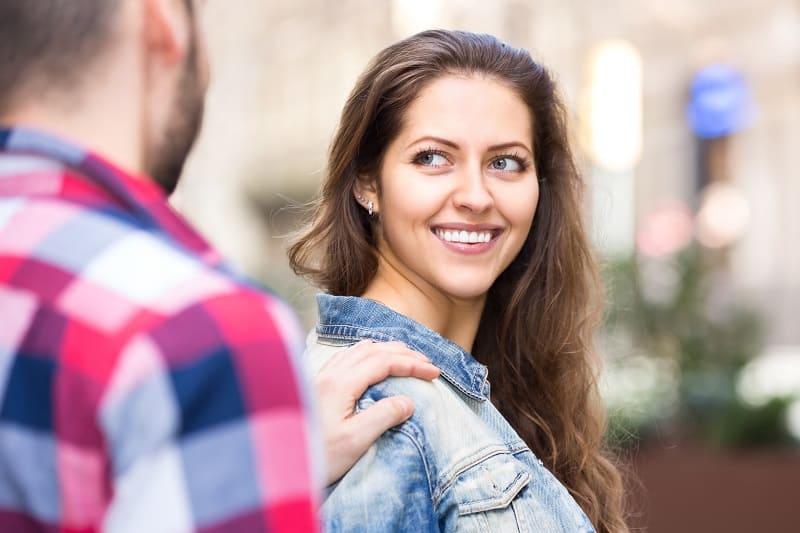 10 Ways To Approach Women in the Real World

So, we’re finally allowed out in the real world again. Swiping left and right isn’t the only way to date anymore and we can satisfy our craving for human interaction. But wait. How do we even be decent human beings without five minutes to write the perfect response? We’ve forgotten what it’s like to have a conversation in real-time with someone of the same sex, let alone a woman you’re crushing over hard.

Approaching women doesn’t have to be complicated. Believe it or not, women pride themselves on being approachable. They’re incredibly social creatures (and have a thing for the latest gossip).

They don’t want you to sweat buckets at just the idea of wanting to speak to them, but we know some of you will anyway. So in case that didn’t convince you, we’ve put together 10 ways to approach women in the real world to put you at ease. 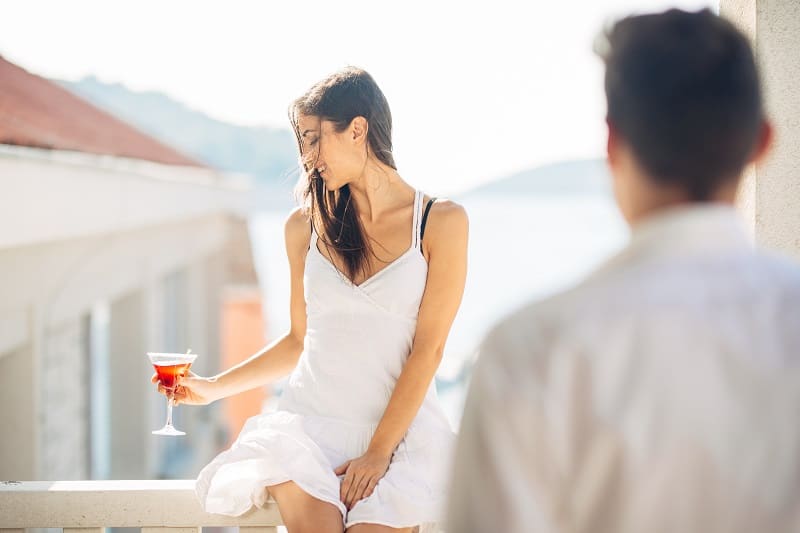 Like anything else, timing is key when approaching women. You should observe what she’s doing (in a non-creepy way) to see whether she’d be open to holding a conversation. If she’s on a heated phone call or in a rush, speaking to you will be the last thing on her mind.

If you’ve caught her off guard she won’t have time to process you’re the type of guy she’d normally notice first, or even hang around a little longer in hope that you might get a chance to speak. You’ll be the annoying guy that rudely interrupted a work crisis or made her miss the train for dinner with an out-of-town friend that she now has to wait an hour for.

Even if you’ve got time to try and make up for it, you’d have started off on the wrong foot, and coming back from it will be hard. Save yourself the ball ache and approach women who seem relaxed. They’re way more likely to engage in a conversation with you and exchange contact information which is ultimately the goal. 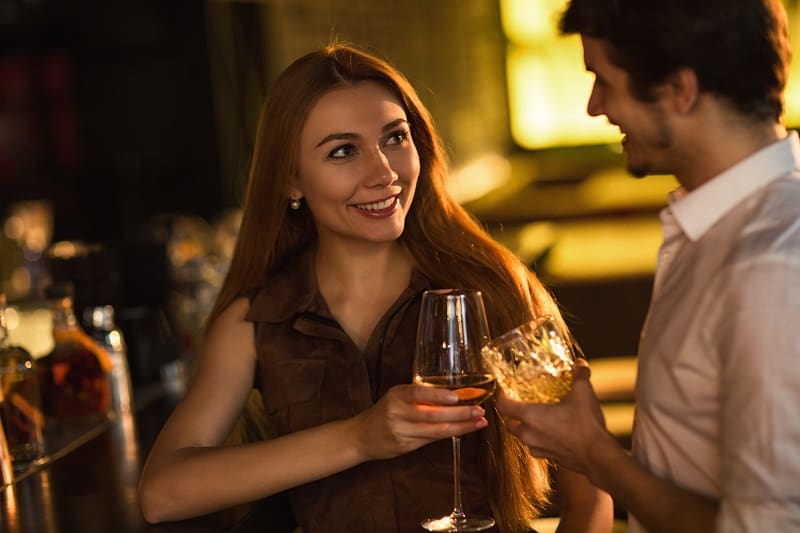 You’re on a boys’ night out and spot a beautiful woman on a girls’ night out across the bar. It seems like the perfect encounter. You’ve got the lads to psych you up, she’s let her hair down and everyone’s a little tipsy so you won’t remember if it doesn’t go down well (hopefully). And if it does, you can join forces.

But not every woman likes to be disturbed when they’re out with the girls. If you’re brave enough to approach an entire girl group, make it short and sweet. Make it clear you’re aware she’s with the girls but you just had to introduce yourself and would love to get to know her one-on-one at a better time.

This prompts a number exchange and a first date. Once you’ve got her number, wish her a good night and text her in the morning to arrange details.

If you respect her time with the girls from the get-go, she’ll respect yours with the boys. Anyone in a healthy relationship knows how important it is to have friendships outside of your relationship. You don’t want her blowing up your phone in 6 months’ time because you’re out late and spend “too much time with the guys.” Start as you mean to go on. 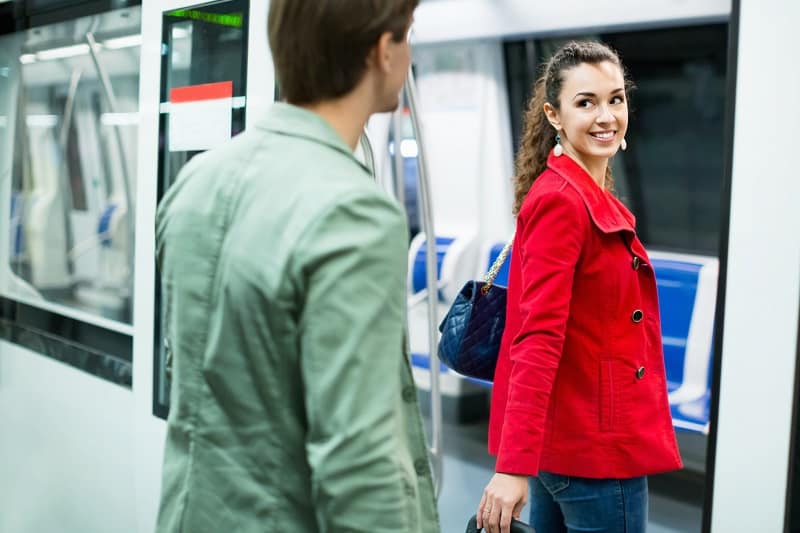 She might be the hottest woman you’ve ever seen in your life and you can envision the next 20 years with her, but don’t tell her that. Almost every woman wants to hear this at some point, but not in the first 10 seconds. Even if you just wear your heart on your sleeve and fall hard, it’ll come off as intense and overwhelming. Not to mention a little bit weird.

Reel it in. We fall in love with strangers we see every day – she won’t be your first and she probably won’t be your last. Not unless you keep your cool that is. With so much riding on your first encounter, you’re bound to come out with something you’ll instantly regret.

Take a deep breath, live in the moment, and be yourself. If she doesn’t like it, there’s always tomorrow when someone else catches your eye. 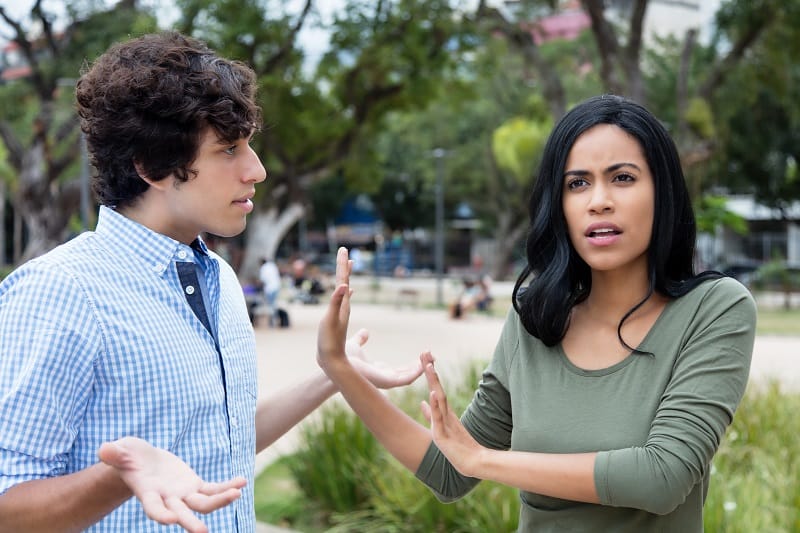 If a woman says she’s not interested, please respect her answer. It takes a lot of courage for a woman to be honest as many women engage in conversation to be polite or out of fear of what will happen if they say no. It’s a scary world out there for women.

By respecting her could make all the difference and make her less fearful of men – a small act of kindness could go a long way. Politely say “it was worth a shot. Take care”. You’ll both come away feeling positive after a nice conversation which is a pretty good alternative if you ask us.

If she says she has a boyfriend, walk away. While you don’t owe him anything, saying “what he doesn’t know won’t hurt him” (true story) is equally disrespectful to her. She’s committed to the relationship and you should admire her loyalty. If she’s willing to throw away years for a few seconds with a total stranger, who’s to say she won’t do the same to you in the future?

It’ll also show you have respect for yourself. Don’t give her your number anyway just in case she changes her mind (another true story). She won’t change her mind (and neither did I). No one likes a beggar.

5. Stay away from physical compliments 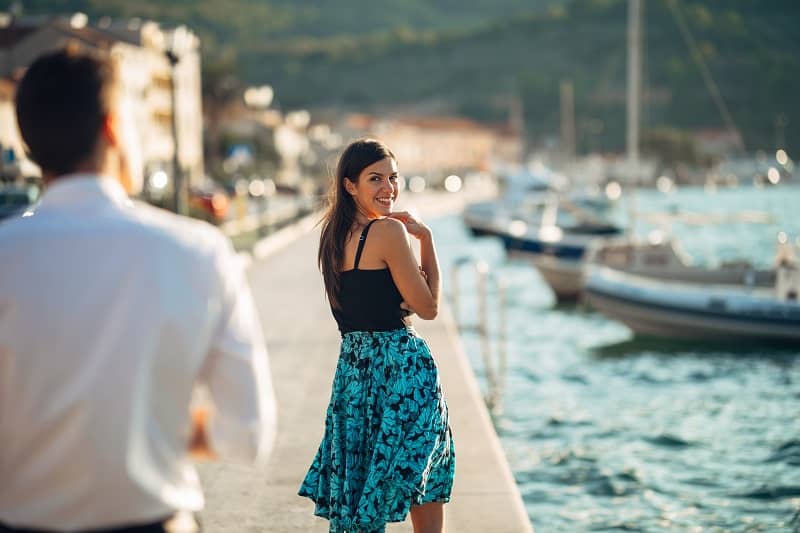 We can’t tell you how many times women get complimented on their appearance and after the 100th time, it gets boring. Come up with something original already. It’s also not as flattering as you think.

It comes across as the only reason you’re interested. While women appreciate physical attraction is a must, they also want to know you’re interested in the person behind the pretty face. Not just as another bedroom conquest. If the first thing you say to her is about the way she looks, chances are she’s going to think you’ve not thought of anything beyond that. Even if you have.

Instead, ask her a genuine question that you want to know the answer to. A little heads up – women know if it’s nothing more than a conversation starter to try and divert the attention away from wanting to rip their clothes off. Asking a question is a great way to get more of a response than just a smile and gives an insight into her personality.

But don’t just ask any old random question. Take inspiration from what’s around you at the time to make it seem more natural. If she’s reading a book, ask her what it’s about and whether she’s enjoying it. Or if you’re at a bar, ask her what her favorite drink is. You get the gist.

See more about - What You Should NOT Do on a First Date: 10 Things to Avoid 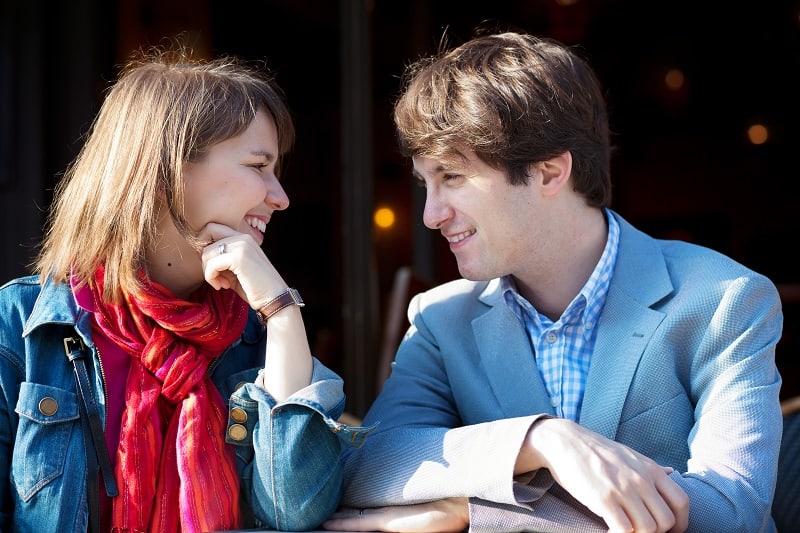 Approaching a woman will be easier if you already know she’s interested and you can find this out with eye contact. We’re not talking full-on eye-fucking here. But a subtle gaze in her direction until her eyes meet yours. When they do, hold your eye contact and give her a smile (or your best smolder, if you’ve mastered one. If you haven’t, now is probably not the time to try with a woman you fancy at stake). This will not only show her you’re confident but it’ll also give you the confidence to make a move.

If she holds eye contact and smiles back at you, you’re in with a shot. It’s important she does both as if she’s friendly, she’ll smile back or initiate a smile with a stranger without so much as a second thought as to whether she finds them attractive or not. It’s a natural instinct for her character. But if her eye contact lingers, it’s pretty much an open invitation to go over and introduce yourself.

7. Don’t immediately ask for her number 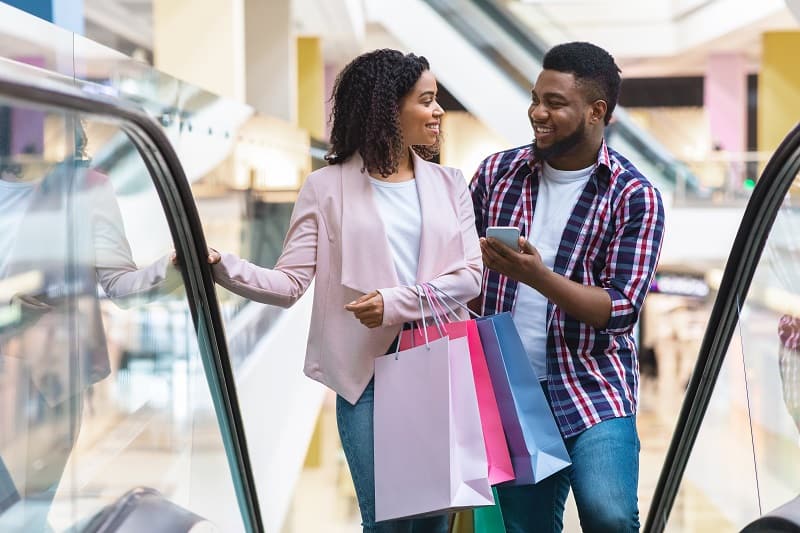 When getting her contact number is the reason behind approaching her, it only makes sense to cut to the chase right? Wrong. Not all women want to give their number to a complete stranger. And even if they do, they know nothing about you except that you have a phone. They don’t know enough about you to feel invested in texting you back so you’re more likely to be ghosted.

Starting a conversation will let her know more about you and why she should definitely text you back. It’ll also make her feel more comfortable around you when you meet again. 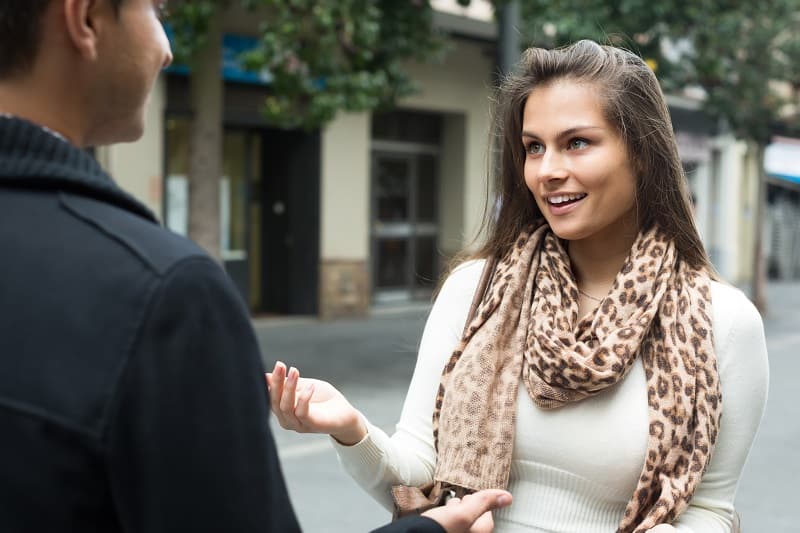 This isn’t us encouraging you to chat up every single woman you walk past. While your odds might seem like they’re in your favor, the chances of meeting someone you have a deep meaningful connection with are pretty slim – remember, it’s quality over quantity gentlemen.

Familiarising yourself with talking to female strangers will allow you to be more confident and comfortable when the opportunity arises to approach a woman you find super attractive. It won’t seem so scary and won’t leave you fumbling over your words.

You’ll also become more mindful of social cues which will help you to figure out what goes down well and what doesn’t. Don’t beat yourself up if it doesn’t go to plan the first time you try. Keep trying until you find an approach that works for you.

What works for your colleague that’s fully booked with first dates from now until the end of the month won’t necessarily work for you. With so much practice he now oozes charm and so can you. Practice makes perfect after all. 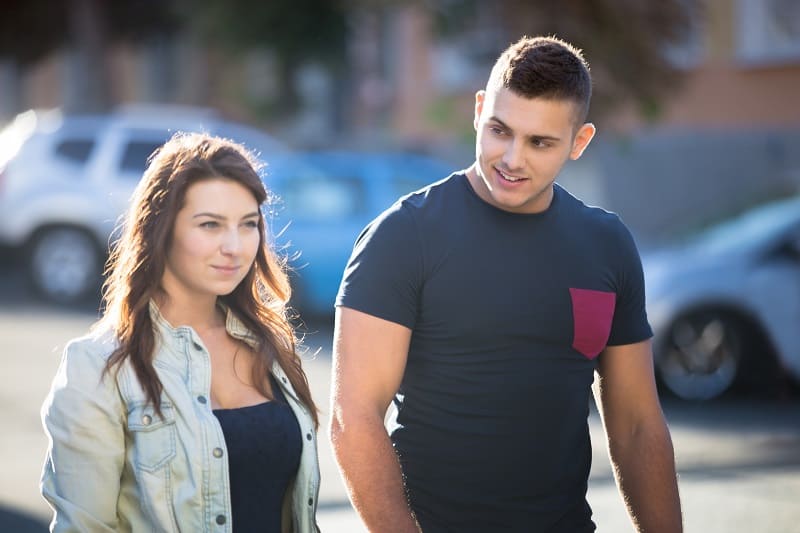 It’s tempting to go OTT to impress someone who has made such an impression on you that you’re willing to approach them on the fly. You want to put your best self forward. We get it, and that’s exactly what you should do. Time is of the essence and you want her to know how great you are, but make sure it’s the best version of yourself and not how you want her to see you.

Most public encounters with women don’t last very long. We all have lives and somewhere to be sooner or later. Holding up a facade for a matter of minutes is easy. Getting through an entire first date without dropping the ball? A little trickier. 2 months of dating? Almost impossible.

Eventually, your guard will drop and she’ll know who you really are. You deserve someone that likes you for you and you’ll never find her if you’re always pretending to be someone else.

10. Get comfortable with rejection 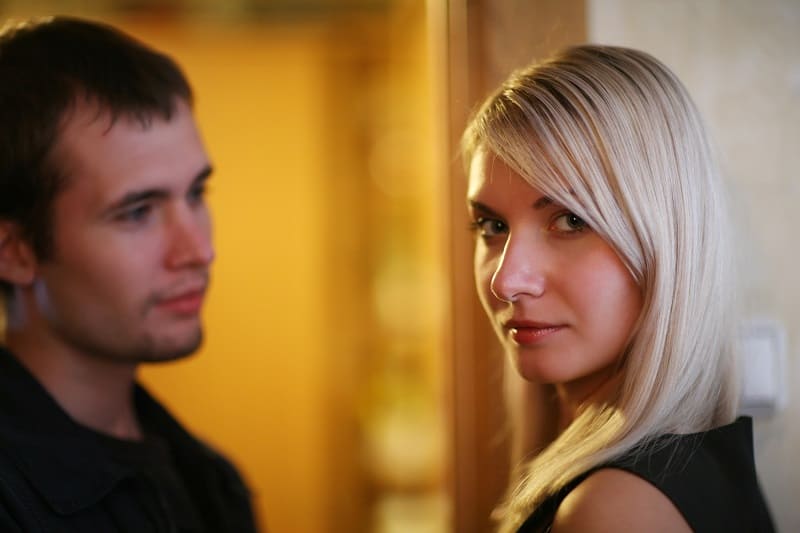 There’s going to be times where you’ve done absolutely right and she still turns you down. You’re not going to be for everyone and that’s fine. But you mustn’t take it personally because it never will be. She’s a woman you’ve known for less than a minute, she doesn’t know anything personal about you.

You won’t always know the reason she wasn’t interested and you don’t have to. All you need to know is if she wasn’t for you, someone else out there is and in order to find her, you’ve got to keep your head in the game.

Once you become comfortable with rejection no one can touch you and you’ll never lose. What’s meant for you will always be for you, and what’s not will never be no matter what you do. The sooner you accept this, the better.