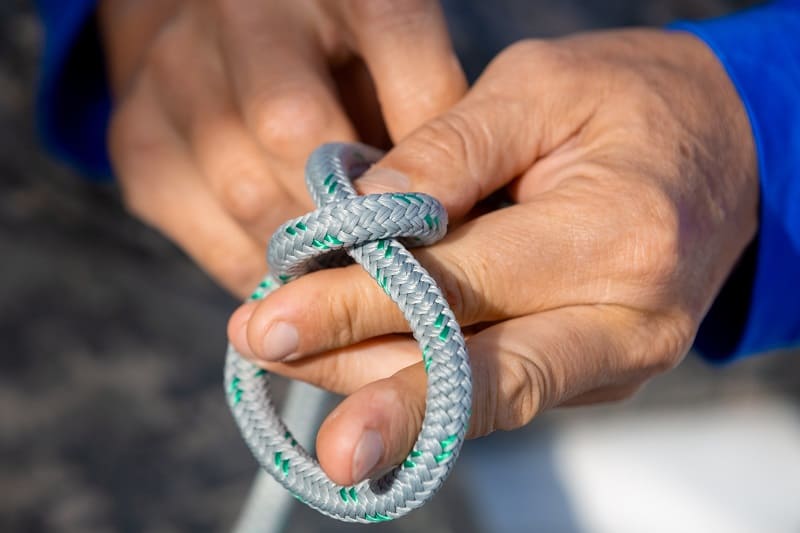 8 Basic Knots Every Man Should Master

You never know how handy knot-tying can be until you find yourself in a situation where you really need to tie a good knot. Just because you’re not in the Navy or the Cub Scouts doesn’t mean you shouldn’t know a few basic knots.

Anybody who works or plays in the great outdoors will eventually need to tie a knot. You might need to secure a tarp, hang a hammock or tie off a boat. No matter the situation, you can’t rely on a series of random loops that you call a knot unless you want to lose your tarp, fall on your butt or watch your boat float away.

Luckily, most basic knots are actually not all that complicated. Once you learn one or two, you’ll start to develop an intuition that makes learning additional knots even easier. So read on, practice your skills, and watch your knotsmanship improve.

The overhand knot is about as basic as a knot gets. Ask a little kid to tie a knot, and this is what you’ll get (unless that kid is some kind of knot-tying super genius). Chances are, you already know how to tie an overhand knot without even thinking about it.

If not, take a second to brush up on it, because this simple knot is the basis of many other knots. Look at it this way: you need to learn basic addition before you tackle trigonometry.

To tie an overhand knot, simply create a loop, push the working end of the line through the loop, and then pull both ends to tighten. That’s it! This knot is commonly used as a stopper, either when hand sewing or to prevent fraying or unraveling at the ends of rope, and is sometimes used as a basic safety knot for climbers.

Aside from its simplicity, the chief advantage of this knot is its security. It’s a good knot to tie if you want the knot to be permanent. In some situations, this can also become a disadvantage, as the knot can jam badly and is difficult to untie.

The slip knot (not to be confused with the heavy metal band) is one of the most commonly tied knots. Its most frequent use is in knitting, where it’s used as the first loop when casting on. A slip knot also makes a good stopper knot, can be used to temporarily secure an item, and functions as a basic snare.

One way to think of a slip knot is as a slipped overhand knot, with a bight or loop that allows the knot to release when the working end is pulled. A slip knot will also tighten when the opposite (running) end is pulled. Thus it can secure an object and withstand heavy tension, as long as weight is applied to the running end and not the working end.

Some knot-tiers refer to any knot that can be quickly undone by pulling an end as a slip knot. Technically, that’s incorrect. There’s only one “true” slip knot. A noose is very similar to a slip knot, but the two are actually two distinct knots.

The bowline is arguably the best knot for creating a fixed loop at the end of a line. It’s often thought of as a nautical knot, and while it is definitely an important knot for sailors to learn, the uses for a bowline extend well beyond maritime situations.

The bowline is an ancient knot. Its first known documentation dates back to 1627, but the knot itself has almost certainly been around much longer. Not only is the bowline easy to tie and untie, but it’s capable of holding a lot of weight. The loop will keep its shape under tension, and it doesn’t bind, which means it can be easily untied even after being used to bear a heavy load.

The bowline is an excellent tie-down knot for tarps and tent pegs and is also commonly used to secure the ends of a hammock to trees. It also works as a rescue (or self-rescue) knot; you can lower it down for someone to step into, or tie it around yourself should you need to be hoisted up.

When you need to secure a line to a stationary object like a pole or post, the clove hitch is one of the best knots for the job. It is often used to tie lashings to a tent or tarp, secure a clothesline, temporarily moor a boat, or when building pioneering structures.

One caveat is that, depending on the type of cordage used, the clove hitch can slip under too much tension. Thus it is usually called upon when one needs a temporary knot that can be easily untied or adjusted. One of the great advantages of a clove hitch is that you can easily adjust the length of the running end by feeding rope from either direction, which will loosen the knot and allow it to be re-tightened.

Here’s a fun fact: when you pass a rope around an object and then tie it to itself in a clove hitch, it’s known as a buntline hitch. This knot is commonly used to tie a necktie, in which case it’s called a four-in-hand knot. It’s one of the simplest and easiest necktie knots.

The square knot, also known as a reef knot, is a simple knot that has been used since Ancient Greek times and has a multitude of uses. It gets its nickname from its purpose among sailors, who use it to reef and furl sails.

A common method of tying two ropes or lines together, square knots are also associated with macrame. They’re used to tie bandages, belts, sashes, and even trash bags. You’ve almost certainly used this knot, perhaps without even thinking about it.

Despite its many uses, the square knot comes with a safety warning. This knot should never be used to secure the ends of two ropes together – known as “bending” in knot parlance – in any situation where personal safety is involved. The knot is simply not stable enough, and many deaths and injuries have been caused by misusing a square knot for bending ropes together.

The bow most people tie their shoelaces with is essentially a square knot. If you think about how often you have to re-tie your shoes, then you understand why this knot should never be used to hold a person’s weight.

Also known as a weaver’s knot, weaver’s hitch, or becket bend, the sheet bend knot goes by many names. But it is universally regarded as one of the simplest and most practical knots for bending two lines together. It’s also used to weave fishing nets, which is where it gets a couple of its more common nicknames.

The sheet bend is an important knot for climbers, and it is widely taught in scouting. When tested against other bending knots such as the butterfly bend, the sheet bend is generally considered to be less secure. That said, it is more than sufficient for most common everyday uses, and its relative simplicity makes it one of the first bends one should learn.

The clinch knot is one of the most important knots for fishermen. In fact, this knot is so synonymous with this particular application that it is often referred to as a fisherman’s knot.

Every angler needs a good, solid knot to connect their fishing line to a hook or lure, and the clinch knot gets the call more often than any other knot. It’s simple to tie and is effective with either monofilament or braided line. The knot actually tightens and gets stronger when weight is applied to it, which will come as a relief when a big fish is pulling hard on your line.

Equally useful to climbers and sailors, a figure eight knot is a type of stopper knot, its main purpose being to create a thick point in an otherwise uniform-thickness rope or line. Thus it can prevent the tag end of the line from slipping out of a retaining device.

Also, much like an overhand knot, the figure eight knot will jam under pressure, but it will not bind as tightly. That makes it easy to undo, whereas overhand knots often bind so tightly that the rope must be cut rather than attempting to loosen the knot.